If you want a new iPhone but you’re put off by the price of the newer iPhones, it’s worth thinking about some older Apple models. The iPhone 7 Plus is still widely available and very impressive - find out more below. 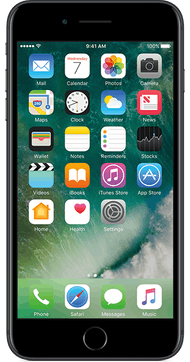 iPhone 7 Plus: About the hardware

As part of the iPhone 7 range, the iPhone 7 Plus came out in 2016. That may seem a long time ago, but if you compare its specs to any modern phone, you’re not likely to be disappointed. It’s still a very capable piece of kit.

If you’re happy to go for an older iPhone then you may also be considering an iPhone 8 as well as the more modern iPhone SE. There isn’t too much difference between these four phones, even in terms of price, so you should keep an open mind when searching for affordable iPhones. The iPhone SE is the newest of the lot, though it has been designed as an affordable option, so you might find overall handling slightly slicker with one of the other models such as the iPhone 8, as these were, at one point, Apple’s flagship offerings.

Each of these models come with a 12MP rear camera and a 7MP front camera. The total number of camera lenses you actually get depends on your model, with Plus versions getting an extra telephoto lens to make your photos look even more professional.

Despite having a whole extra camera to coax you into taking even more photos, the iPhone 7 Plus doesn’t offer any more storage options than the iPhone 7 standard model. You can pick between a relatively modest 32GB and a more generous 128GB.

How much memory does my iPhone 7 Plus need?

32GB is ideal for casual users, which means at you:

128GB is ideal for most users, which means that you:

Storage is important as you can’t use a MicroSD card with an iPhone. You can make the most of cloud storage so you don’t find your phone is clogged with photos and video, but apps can’t be moved to the cloud. So, if you tend to use heavier apps, it’s better to be safe than sorry and go for the larger size. That said, paying for the bigger storage offering can be a big jump up in price, so think carefully about what you really need to be paying for.

Apple claims the iPhone 7 Plus battery lasts up to two hours longer than that of the iPhone 6S Plus, though battery life can vary hugely from user to user. The battery should certainly get you through the day, but if you rely on power-hungry apps like photo or video editors then you might need to keep your charger nearby.

The iPhone 7 Plus probably has some of the most trend-led colours of the iPhone range with gold and rose gold putting in an appearance alongside classic black and silver. Be aware that, given the phone’s age, the trendier shades of gold and rose gold may be sold out.

The iPhone 7 Plus has the following cameras:

And to help you capture the perfect image, the following extras are provided:

The iPhone 7 Plus uses Touch ID so you can unlock your phone with a fingerprint.

It may be discontinued but it’s still fairly easy to find an iPhone 7 Plus deal, though it may not be quite as widely available as the standard iPhone 7. Colour choices may also be limited.

What are the best iPhone 7 Plus deals?

The iPhone 7 Plus is definitely an affordable iPhone compared to the iPhone 11 but that doesn’t mean it’s a small outlay. Shop around for deals, use our price comparison tool, and make sure you consider all the details when it comes to securing the best deal, including:

How expensive is the iPhone 7 Plus?

An iPhone 7 Plus comes in at around £100 more expensive than the standard iPhone, for a total price of £400. That said, this is where refurbished phones can really help you save a bundle so be open-minded about the prospect of a used phone if you want to land a cheap iPhone deal.

The iPhone 7 is still widely available and while this is still true of the iPhone Plus, you may find it’s slightly harder to find. The following networks still offer the iPhone 7 Plus:

iPhone 7 Plus on pay as you go

Pay as you go options are available for the iPhone 7 Plus too, but you may have to settle for a refurbished phone. Major networks will only sell ‘like new’ phones which are as close to brand new as a previously-purchased phone gets. Other networks like giffgaff will offer models that have been owned for longer, with many more obvious signs of wear – the bonus being that these are priced much cheaper.

Is the iPhone 7 Plus discontinued?

Yes. When a phone is discontinued it means Apple is no longer manufacturing them. The iPhone 7 Plus has been discontinued but only very recently, so there’s still a good level of stock around. With that in mind, you might want to get your hands on one sooner rather than later.

Can I get a refurbished iPhone 7 Plus?

Absolutely, but make sure you buy from a trustworthy source. Online bidding sites and market places aren’t usually trustworthy, not least because sellers have probably done no more than a factory reset. A professionally refurbished phone will have removed all traces of the previous owner and, depending on the network that has serviced it, may even come with a new battery and fully updated OS.

iPhone 7 and it’s bigger version, the iPhone 7 Plus, are both extremely good phones by anyone’s standard so those few years that have passed since its release date really shouldn’t impact your buying decision.

Is the iPhone 7 Plus the best older iPhone?

It could very well be. After all, in terms of camera, battery and overall design, it can more than contend with the iPhone 8 or even iPhone XR. The only clear victor overall in the battle of the iPhones is probably the iPhone 11 which has really raised the bar. That aside, any iPhone from recent years is just as impressive as it was on its release day. Older iPhones may no longer be top of the range, but they’re still premium pieces of tech.