The most talked about Christmas advert of the year

We made it folks, it’s that time of the year where the UK’s biggest brands battle it out to take the coveted crown for the best Christmas advert. Using AI, we’ve analysed the social sentiment across UK retailers’ 2020 Christmas adverts to understand the public’s reaction.
Share this guide

We made it folks, it’s that time of the year where the UK’s biggest brands battle it out to take the coveted crown for the best Christmas advert. Using AI, we’ve analysed the social sentiment across UK retailers’ 2020 Christmas adverts to understand the public’s reaction.

With the festive period expected to be a little different this year, it’s more important than ever before for retailers to hit the right tone with their advertising and reflect the mood of the nation.

While some retailers have faced 2020 head on, others have chosen to provide a little light relief, focusing on the Christmas spirit we all know and love from years gone by.

So, who got it right and who missed the mark?

With an overwhelming response, Lidl’s tongue-in-cheek ad playfully highlights scenes from its competitors and our data reveals it’s officially the most liked Christmas advert of the year, receiving over 30,000 posts and a 99% positive sentiment score.

In a bid to secure its own crown, the famous M&S food ads were narrated by the Queen herself — Olivia Coleman — and received an impressive 96% positivity score.

Kevin the Carrot may have been a fixture of Aldi’s Christmas adverts for several years now, but it’s clear from our analysis that his adventures haven’t quite captured the nation’s heart this year, with a 93% negative sentiment score. Sainsburys ads have created the most mixed conversations, with 49% of the tweets shared containing a negative sentiment.

Broadband expert Max Beckett, said: “In a year where we all need to spread a little more festive cheer, we take our hats off to not only Sainsbury’s for its handling of the unfairly negative response to its adverts, but the rest of the UK supermarkets for their powerful #standagainstracism Channel 4 ad takeover.” 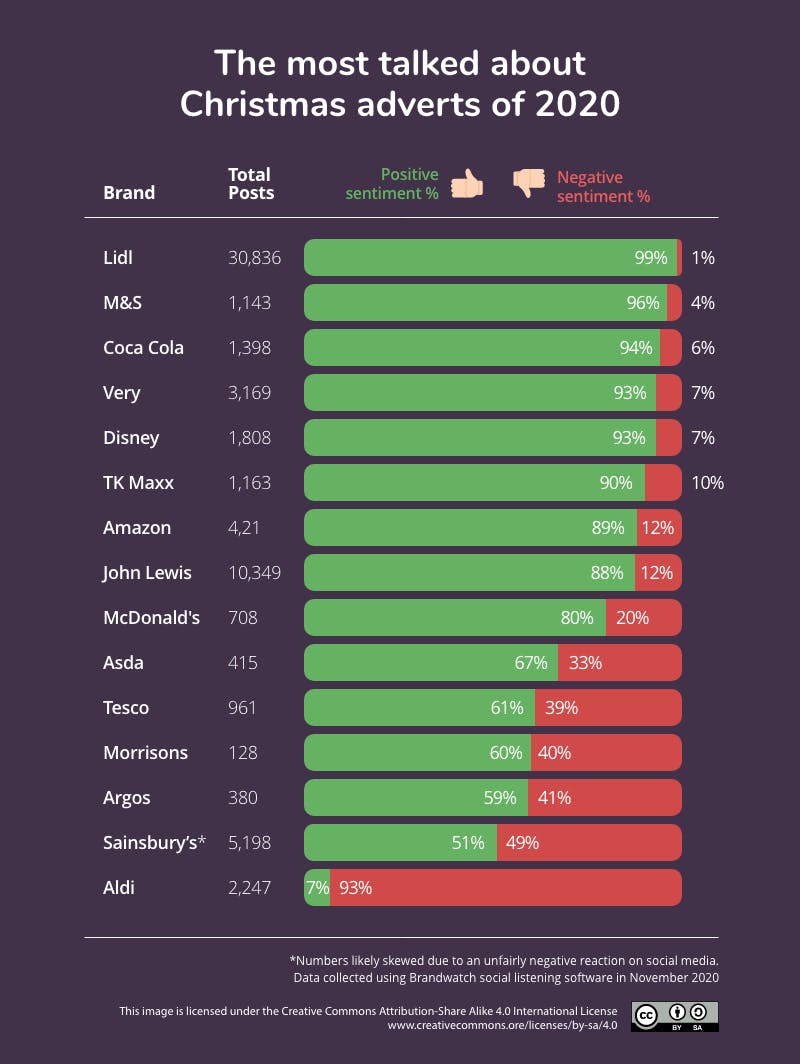 As well as the positive and negative sentiment, the software also allowed us to analyse the emotion behind viewers’ tweets.

Following Lidl and M&S, the TK Maxx and Morrison’s adverts were the next to spark the most festive joy for viewers, receiving a score of 81% and 64% respectively.

The advert released by Argos received the most anger, with 60% of social media posts containing the sentiment, followed by ASDA with 47%.

McDonalds, Disney and Amazon’s offerings clearly tugged on the nation’s heart strings, with the majority of social media posts for the three adverts containing a feeling of sadness. 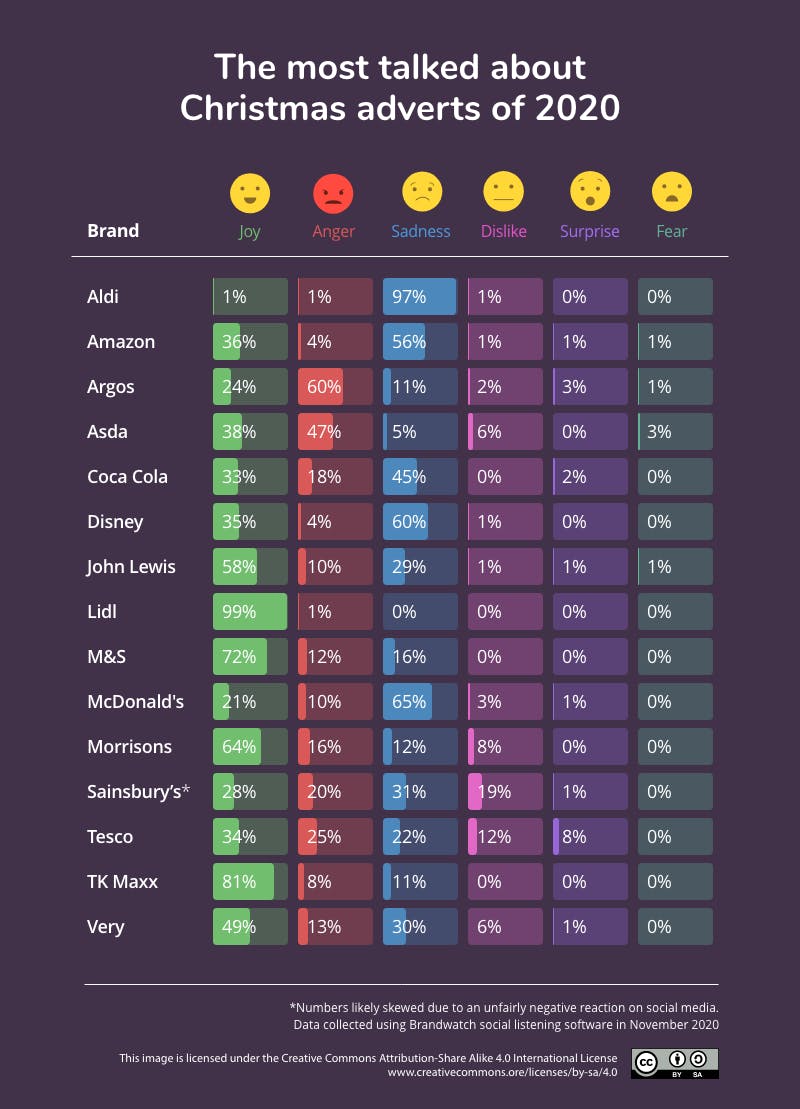 Perhaps the most debated Christmas advert of the year, our analysis of the Sainsbury’s three-part gravy series reveals varying emotions across the board. While 28% of posts contained joy, over half of the views shared on social media were of anger, sadness, or dislike.

Emma Bisley, Head of Broadcast Marketing at Sainsbury's, said of the festive campaign: “We know that this year has been different for everyone, so we wanted to take a different approach with our Christmas campaign by simply reminding people that Christmas dishes are gestures of love and care, served by up by those who matter most. It's our memories of these dishes, prepared by the people we love, that have the power to transport us home - whether we're there or not.

“It was important to us to focus on family connections and emotions, creating a relatable and heartfelt look at the memories Christmas brings, whilst providing a sense of optimism throughout. We hope everyone enjoys watching the collection and it takes them back to their fondest memories of food, home and Christmas.”

Stream all the adverts

If you missed the winning advert, why not stream them all and decide for yourself?

With plenty of great Christmas TV and box-sets to enjoy over the festive period, you’ll want to ensure you’ve got the best broadband to match. Visit our website for more information and let our broadband experts help you find the best deal for you.

Data was collected and analysed using Brandwatch social listening software and is correct as of November 2020.