Which TV series are giving us major fashion, beauty and interior inspo? 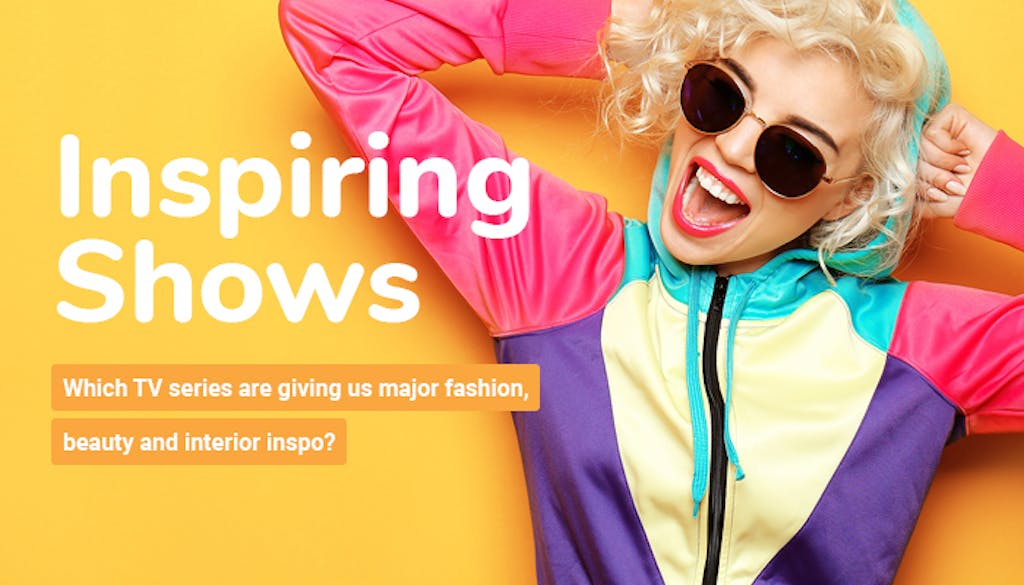 We all take inspiration from many different sources, whether it’s our social media feeds, what we see out on the street or in the office, or even from our favourite TV shows.

Whether it’s fashion, beauty or interiors, the set and costume departments on our favourite shows are killing it at the moment, giving us plenty to draw inspiration from.

But which are the programmes that are inspiring us to switch up our style the most? We analysed Google search data from the last twelve months to find out and you'll be pleased many are available on online streaming platforms.

If after reading, you're inspired to dive into one of these series, ensure you're streaming with the best connection for a fair price by checking out our broadband deals.

Fashion inspo: The TV shows that influence our wardrobes the most 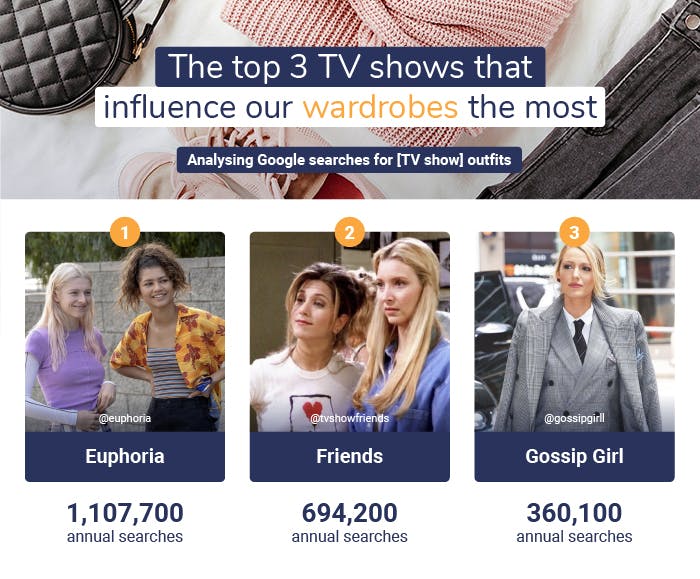 From period pieces to modern sitcoms and teen dramas, TV has always been a rich source of fashion inspiration, no matter what your style. But which are the shows that have influenced our wardrobes the most in the last year?

After its first season aired in 2019, followed by two special episodes in recent months, Euphoria has quickly established itself as the coolest show on TV, following Rue (played by Zendaya) and friends through high school.

It’s received particular attention for the outfits, with each of the Gen Z cast members having their own distinct style. Accurately depicting teenage life and fashion is notoriously difficult to do on TV, but from the sheer amount of people searching for inspiration here, it seems that Euphoria has nailed it.

From a show on the cutting edge of fashion to one which aired its last episode 17 years ago, Friends is still as relevant as ever, especially as the world goes through a period of ‘90s nostalgia.

In particular, just under half a million people last year searched for tips on how to dress like Jennifer Aniston’s Rachel Green, the quintessential ‘90s ‘it-girl’.

Despite finishing around eight years ago, it’s clear that the teen drama series Gossip Girl still has a special place in our hearts, with over 360,000 annual searches for tips on how to recreate the looks of the likes of Blair Waldorf (played by Leighton Meester) and Serena van der Woodsen (Blake Lively).

And with a sequel series set to air later this year, there’s sure to be a wave of 2021s fashion inspo yet to come in future from the Upper East Side! 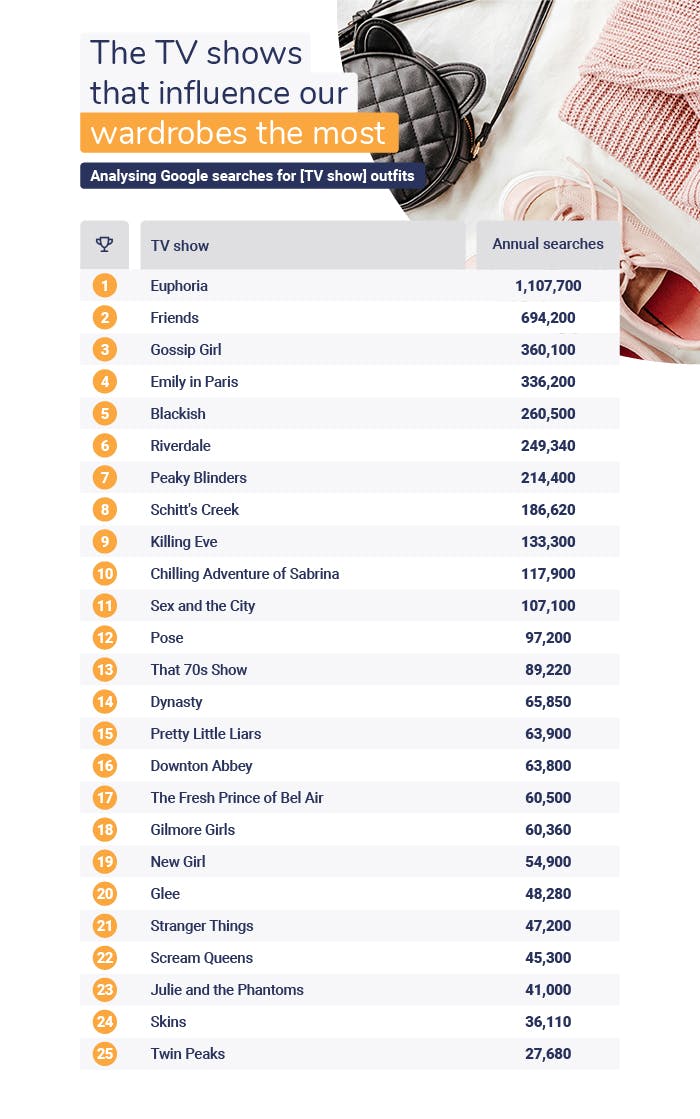 The TV characters that influence our wardrobes the most 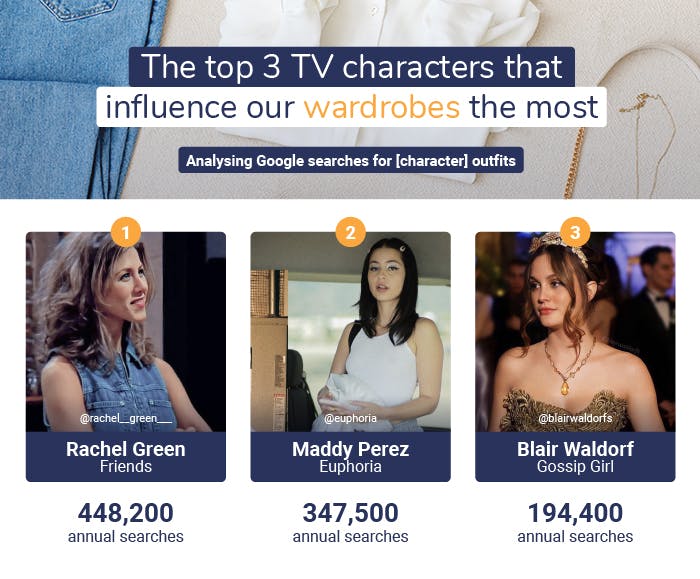 Considering she has a haircut named after her, it’s perhaps no surprise to see that Rachel from Friends took the top spot as the character that inspires our wardrobe the most, even after all these years.

And given that she eventually went on to work for the likes of Bloomingdales and Ralph Lauren, it’s safe to say that Rachel knew a thing or two about fashion.

We’ve already seen just how influential Euphoria has been when it comes to fashion, and it seems that the character of Maddy Perez, in particular, is giving us the most inspo.

Played by Alexa Demie, Maddy is the show’s clear standout style icon, with over 347,000 people searching for how to emulate her look in the last year.

Gossip Girl was almost as well known for its clothes as its drama, and the character that inspired the most outfits of all was Blair Waldorf. 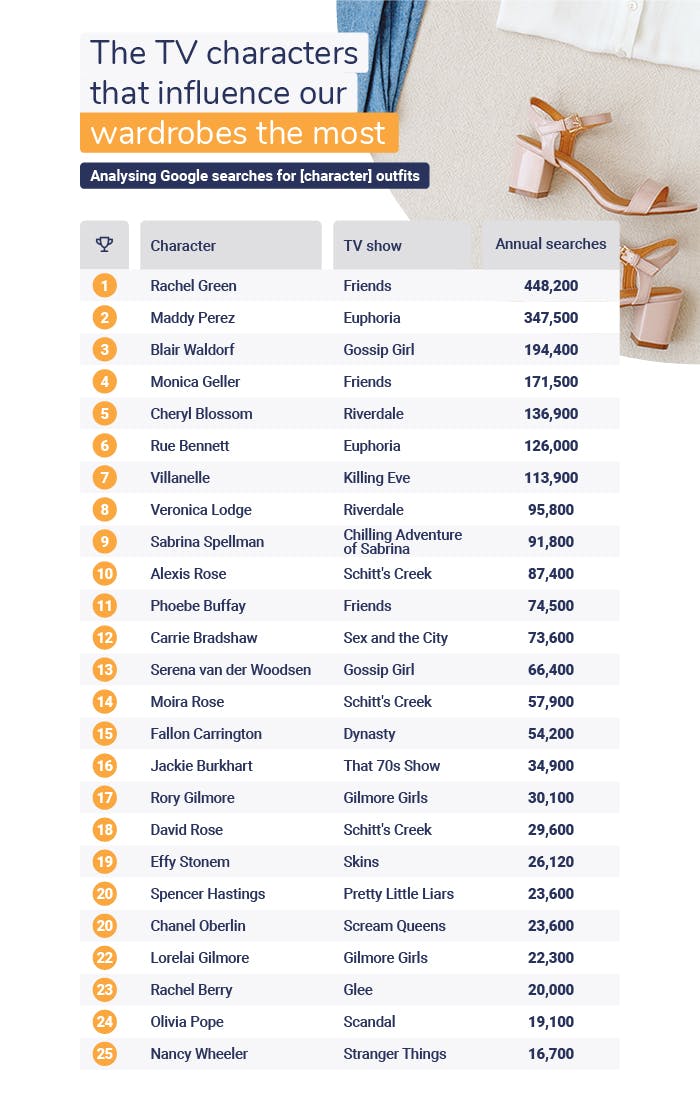 Makeup inspo: The TV shows that influence our makeup the most 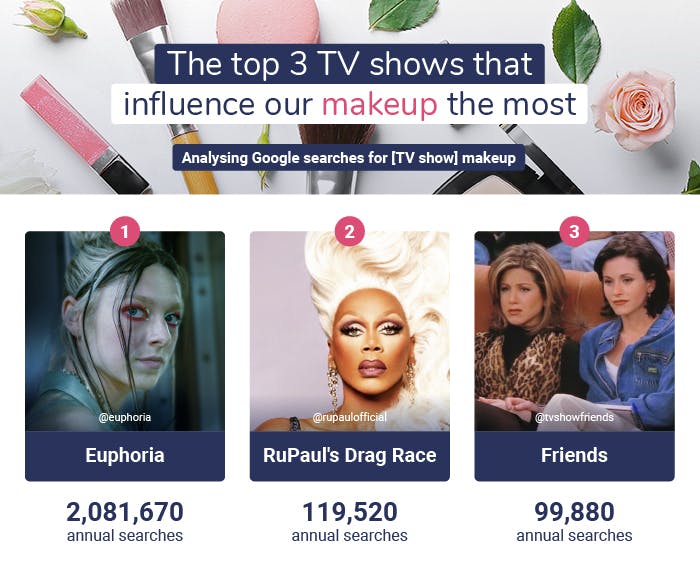 TV shows employ some of the best makeup artists in the business to ensure that the characters’ beauty regimes are on point, especially when it comes to period pieces where the look has to be faithful to the era. But which are the TV makeup looks that we’re looking to recreate the most?

The dramatic makeup looks featuring bold colours, shimmering gold tars and rhinestone eyebrows took social media by storm and saw an incredible 2 million searches in the last twelve months, that’s almost twenty times more searches than for any other show on our list!

It’s not just fictional characters that we can draw inspiration from when it comes to our makeup looks and there aren’t many shows on TV to learn more about beauty than RuPaul’s Drag Race.Each season brings with it a new lineup of queens, each with their own incredible look and thankfully many have posted tutorials on their social channels for you to follow along with too.

As was the case with fashion, it seems that even all these years later, we still can’t get enough of Friends, with just under 100,000 annual searches for ways to recreate the looks of Rachel, Monica, and Phoebe. In fact, Friends-inspired makeup looks have proved so popular that Revolution Beauty recently did their own collection based on the series, featuring eyeshadow palettes, lipsticks, lip gloss and more. 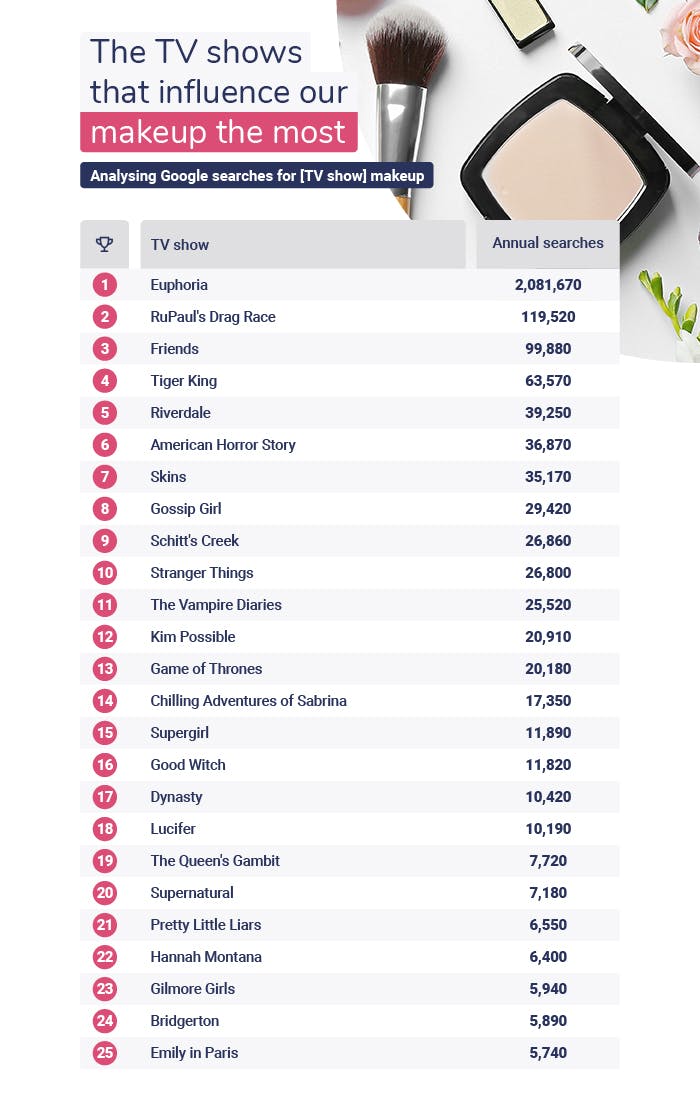 The TV characters and people that influence our makeup the most 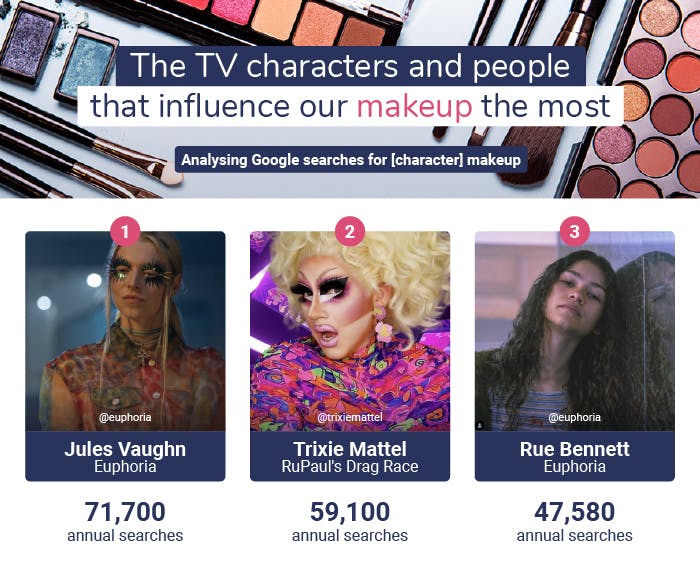 While when it came to fashion, Maddy was our number one source of inspiration from Euphoria, when it came to makeup, it was Jules who we couldn’t get enough of. Jules tends to opt for playful, colourful makeup looks and there are hundreds of tutorials out there to help you recreate them for yourself.

In second place wasn’t a fictional character, but a real-life star of RuPaul’s Drag Race, Trixie Mattel. During her time on the show, Trixie stood out with her unique makeup looks and now has her own cosmetics line and YouTube channel so you can recreate them for yourself!

The fact that not one, not two, but three characters from Euphoria have made into the top three across fashion and makeup shows just shows how unique the looks of each character are. Rue, played by Zendaya, is known for a number of makeup looks from the show, including her melancholic but colourful ‘glitter tears’ look. 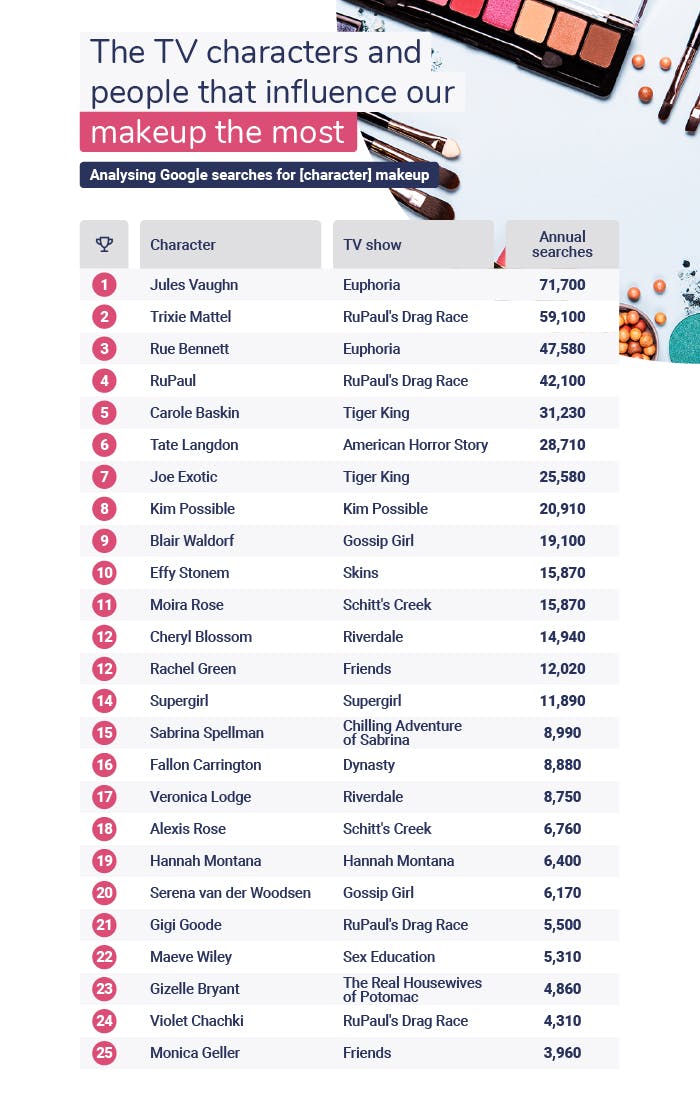 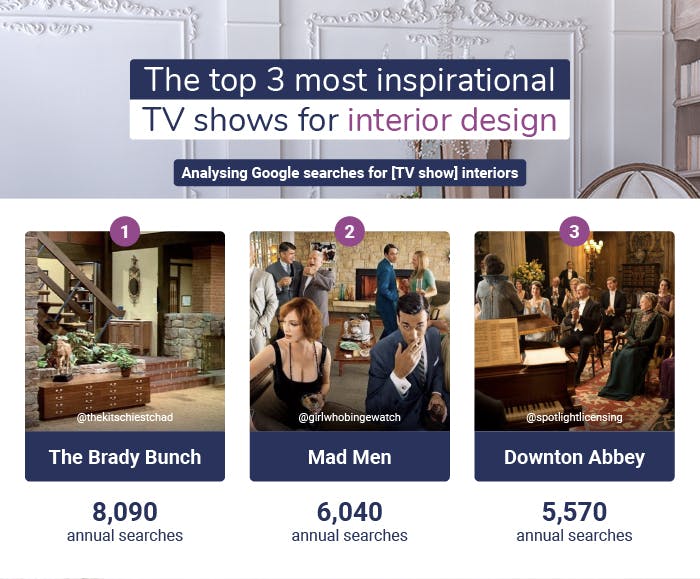 If you want interior design inspiration from TV, you’d probably head straight to Grand Designs or other DIY shows, but there’s plenty that we can take from the sets of some of our favourite fictional shows too!

Something of a surprising winner here, given that the US sitcom The Brady Bunch aired its last episode in 1974, but aside from people looking to take their home back to the early 70s, there is a potential explanation here.

2019 saw the release of a reality miniseries called A Very Brady Renovation which saw the original house used for the show brought back to life, perhaps sparking a spot of ‘70s nostalgia in the audience at the same time?

The long-running Mad Men meticulously captured the style of the 1960s during its seven-season run and its popularity sparked the ‘Mad Men effect’, with normal people adopting the period look of the offices and homes of Don Draper and co.

The set designers used actual authentic pieces to bring the scenes to life and their hard work clearly paid off, with over 6,000 searches for ‘Mad Men interior design’ many years after the show went off the air.

The lavish settings of Downton Abbey are enough to inspire anyone, but recreating them might be a stretch too far for the majority of us!

The real-life Downton Abbey is Highclere Castle in Hampshire, which has been used for filming many TV shows and films and was rented out for the shooting of the series. 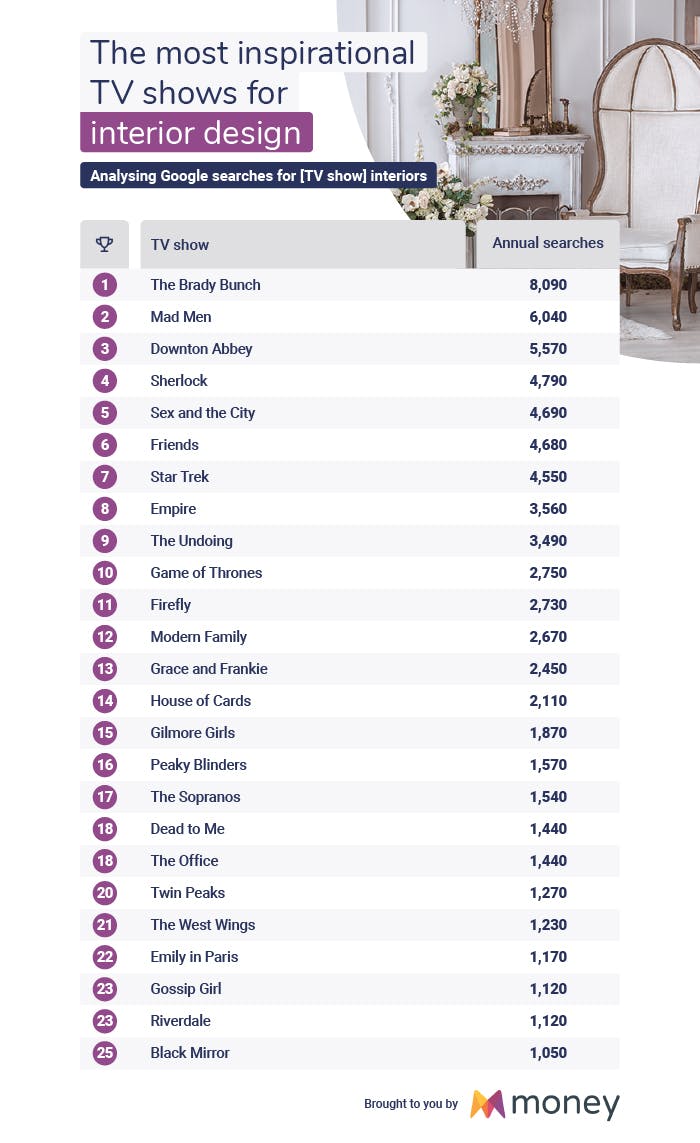 For each category, we analysed the number of annual global searches in the last twelve months (March 2020 to February 2021) for relevant terms related to each series and their characters, using Google Ads’ Keyword Planner.

For TV shows we combined the relevant keywords for both the show itself and characters within the show, for example: “Friends outfits”, “Rachel Green outfits”, “Monica Geller outfits” and so on.

Note that characters and shows which primarily returned results about outfits or makeup looks relating to Halloween were omitted.