Which are the movies and games in our favourite franchises that didn’t live up to expectations? 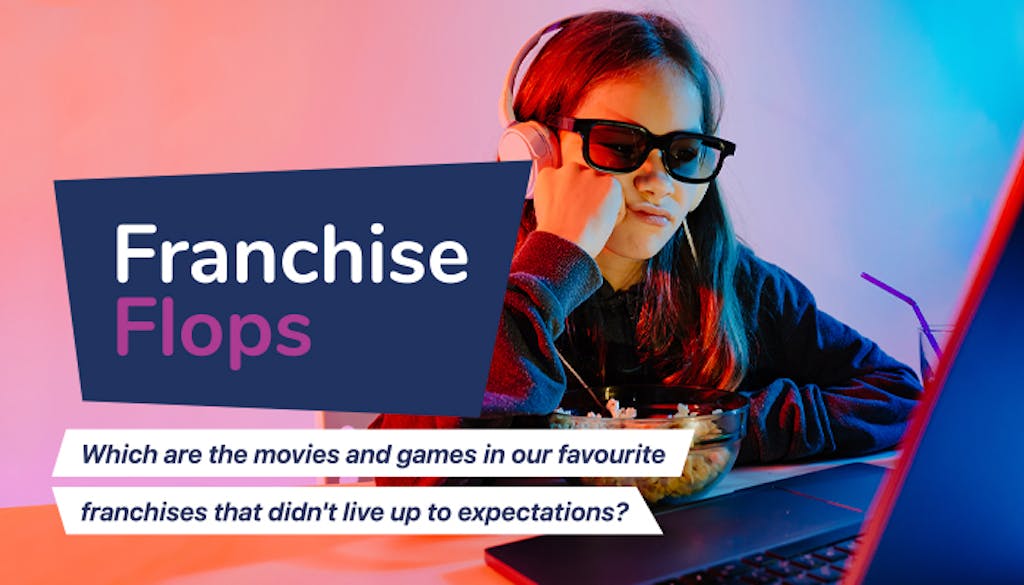 Nowadays, the entertainment landscape is dominated by franchises, some of which stay on our screens for years at a time.

After all, if audiences love something, it makes perfect sense for the creators to put out a sequel (and another, and another). But at some point, even the most successful franchises fail to hit the mark.

We’ve taken a look at some of the most loved franchises from the worlds of movies and video games to see where each one flopped (as well as the times they got the length just right).

Don't let poor internet stop you from streaming the best and worst franchise flops. Ensure you're getting the best connection for a fair price by checking out our best broadband deals.

So, which individual movies would producers of the biggest franchises rather you forget? 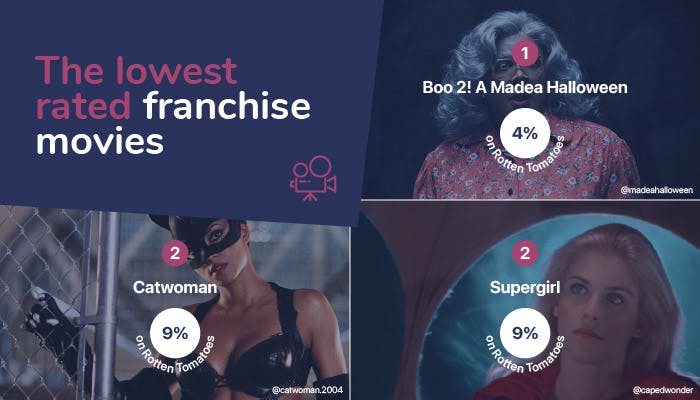 Tyler Perry’s entire Madea franchise can probably be categorised as a flop, critically at least, so much so that it’s relatively unknown outside of the US. The entire franchise holds an average Rotten Tomatoes score of just 20%, but the lowest-rated entry of all is Boo 2! A Madea Halloween which was panned by critics.

2004’s Catwoman is often considered to be one of the worst movies of all time, with one of the reasons being its complete lack of connection to the character of Batman. Despite the many criticisms, Catwoman was actually still the highest-grossing female-led superhero film until Wonder Woman was released in 2017.

The fact that Catwoman’s 9% rating is shared by the Superman spin-off Supergirl shows just how little effort was put into female-fronted superhero movies until recent years. Thankfully, more recent portrayals have done justice to both characters!

Being released as part of a franchise that’s already successful usually means that a movie will do pretty well at the box office, even if it isn’t that good, but that isn’t always the case. (Note that we’ve excluded films that only had a limited release.) 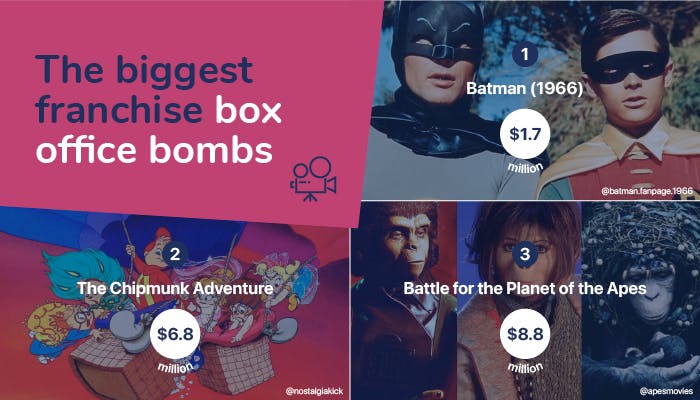 The 1966 adaption of the Batman TV series was the first time we had ever seen the Caped Crusader on the big screen, and while it’s considered a cult classic it only grossed $1.7 million at the box office. Granted, it was released over 50 years ago, but even when adjusted for inflation, the figures don’t come close to the more recent releases.

Despite not being particularly well received, the more modern instalments in the Alvin and the Chipmunks series have gone on to make hundreds of millions of dollars. That was the case for the 1987 TV adaptation The Chipmunk Adventure, which made just $6.8 million at the box office.

The original Planet of the Apes was hugely successful, but by the time it reached the fifth film in the series, it was starting to run out of steam and Battle for Planet of the Apes ended up making just $8.8 million at the box office and was the last release for the franchise before it was rebooted in the 21st century.

Gaming franchises often have a lot more instalments than movies, stretching back over many years, but also means there are more than likely a couple of forgettable entries. 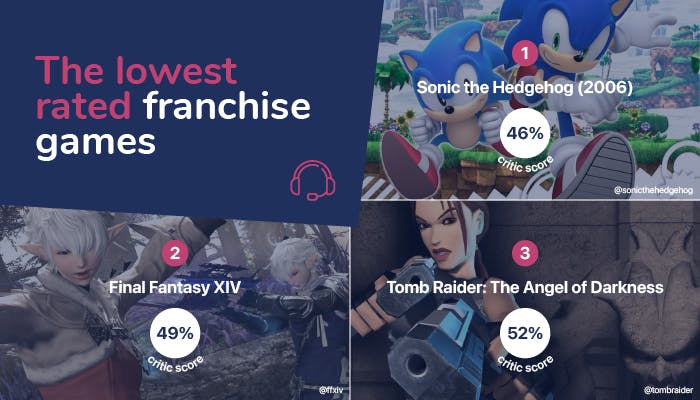 The 2006 release of Sonic the Hedgehog was intended as a reboot for the franchise on the seventh generation of consoles but wound up being a huge flop for the classic character. Sega even took the choice to remove it from retailers in later years, but it did prove to be a turning point for the series, sparking a creative rethink.

Final Fantasy XIV was so badly received by critics and fans that the developers shut down the servers, brought in a whole new development team and started again from the ground up, replacing the game with a new version, titled A Realm Reborn.

Tomb Raider is one the most iconic gaming franchises of all time, but 2003’s Angel of Darkness was something of a low point for the series. The poor reviews and sales of this game and the movies starring Angelina Jolie led to major changes behind the scenes for Lara Croft, with production being transferred to a new studio.

The worst (and best) selling games in each franchise 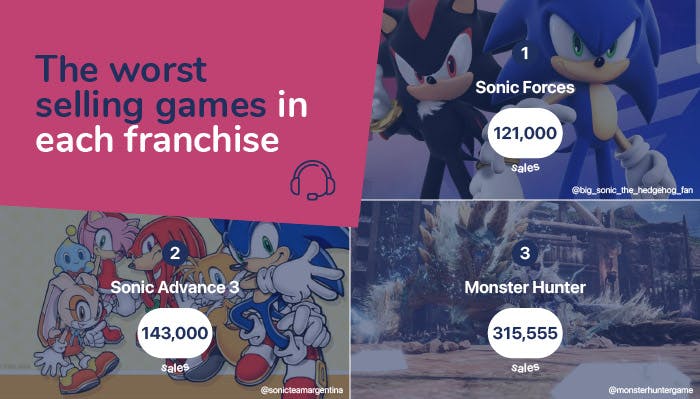 While it isn’t the worst-reviewed Sonic title of all time, Sonic Forces does have the lowest sales figures, with just 121,000. However, it has enjoyed something of a revival after being released for free on PlayStation Plus.

Despite relatively strong reviews, Sonic Advance 3 only sold 143,000 copies when it came out in 2004, perhaps due to the fact that Sega had only just brought out its two very similar predecessors for the Game Boy Advance in previous years.

While the Monster Hunter franchise is hugely successful, it only really took off with the release of some of the later titles. The initial game actually only sold 315,555 copies on its initial PS2 release (although later re-releases on the PSP did bump this number up slightly).

For movies, we looked at all films which fall under each franchise, including subseries within a larger franchise (for example the likes of The Avengers, Iron Man and Captain America within the Marvel Cinematic Universe) and reboots of series (for example we took all the Spider-Man movies as one franchise, including those played by Tobey Maguire, Andrew Garfield and Tom Holland).

The critical reception score for each movie was sourced from Rotten Tomatoes, which indicates the percentage of professional critic reviews for each movie that were positive.

For video games, where games are frequently remade and released on newer consoles and with lots of spin-off titles, we stuck to the ‘core’ titles in each franchise and in the case of huge franchises such as Mario (which includes over 200 games in total), these were split into smaller subseries such as Super Mario and Mario Kart.

The critical reception score for each game was sourced from Metacritic, which aggregates professional video game review, with the exception of some older games which were released prior to Metacritic’s existence, for which we used scores from a now-defunct aggregator GameRankings (which has since been incorporated into Metacritic). For each game, we took the critic score for the original game on the initial platform that it was released on.

Estimated sales figures were sourced from Video Game Sales Wiki and, again, relate only to the initial release of the game, not taking into account any subsequent rereleases or remakes.