Films can make us laugh and they can make us cry, but sometimes, they can leave us scratching our heads wondering what on earth we just watched, though not necessarily in a bad way.
Share this guide 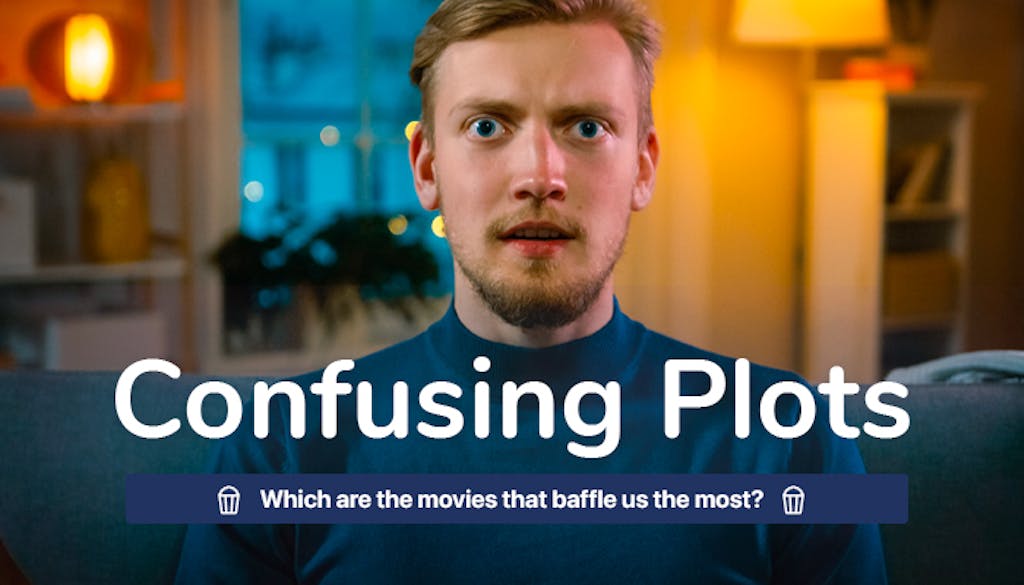 Most movies allow us to switch off and relax for a couple of hours, but there are others that require constant attention even just to keep up with what’s going on.

So, what are the most confusing films of all time? And do audiences appreciate an intricate, complex plot, or does it simply make us doze off?

The broadband experts at money.co.uk analysed 132 films to reveal the most confusing plots of all time. If you're keen to find out whether you can work out what is going on in these films, you'll be pleased to hear several are available on online streaming platforms.

When watching films online, you'll want to ensure you've got a speedy internet connection. If your current provider is not giving you the connection you need, check out our broadband deals.

The most confusing films of all time

To begin with, we studied a number of lists from online publications to create a list of 132 films generally considered not to be the easiest to follow. We then analysed the Google search volume for each film followed by the terms “ending”, “explained” and “ending explained” to see which were the ones that viewers most often needed to turn to Google for some extra explanation. 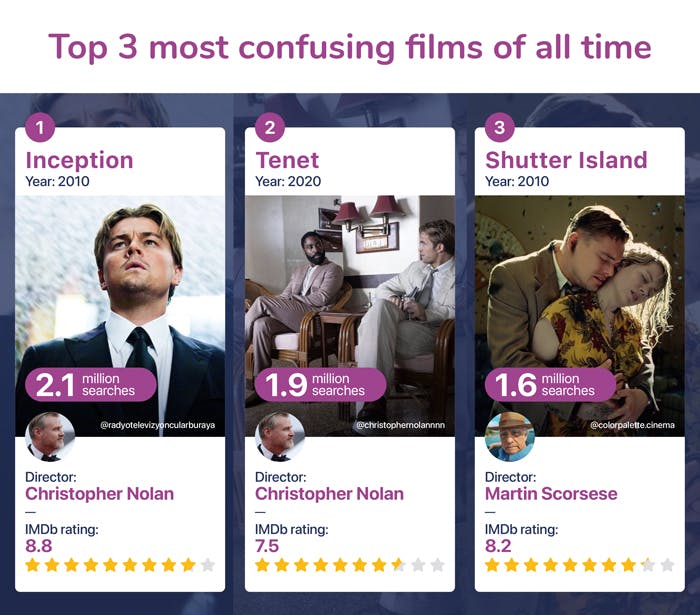 Taking the top spot as the most confusing film of all time is Christopher Nolan’s 2010 science fiction action movie Inception. Over 2 million people have flocked to Google in search of answers, with over 1.2 million alone searching for the film’s ambiguous ending.

Considering it’s a film about being able to jump into different layers of people’s dreams to implant and steal ideas, it’s hardly surprising to find it at the top!

Ten years after the release of Inception, Nolan returned with another head-spinner in the form of Tenet. After a career of making mind-boggling (albeit successful) movies, many consider Nolan’s latest to be the most confusing of all.

It follows a secret agent who attempts to prevent World War III by travelling through (and from) time and bending the laws of nature, armed with just the word “Tenet”.

2010 saw Leonardo DiCaprio star in not one, but two of the year’s biggest movies, although they both required more than a little concentration from audiences. As well as the previously mentioned Inception, DiCaprio teamed up once again with Martin Scorsese for Shutter Island, an adaptation of Dennis Lehane’s novel of the same name.

It sees two US marshals dispatched to an asylum on a mysterious island to investigate a missing patient, with more than a few twists along the way. 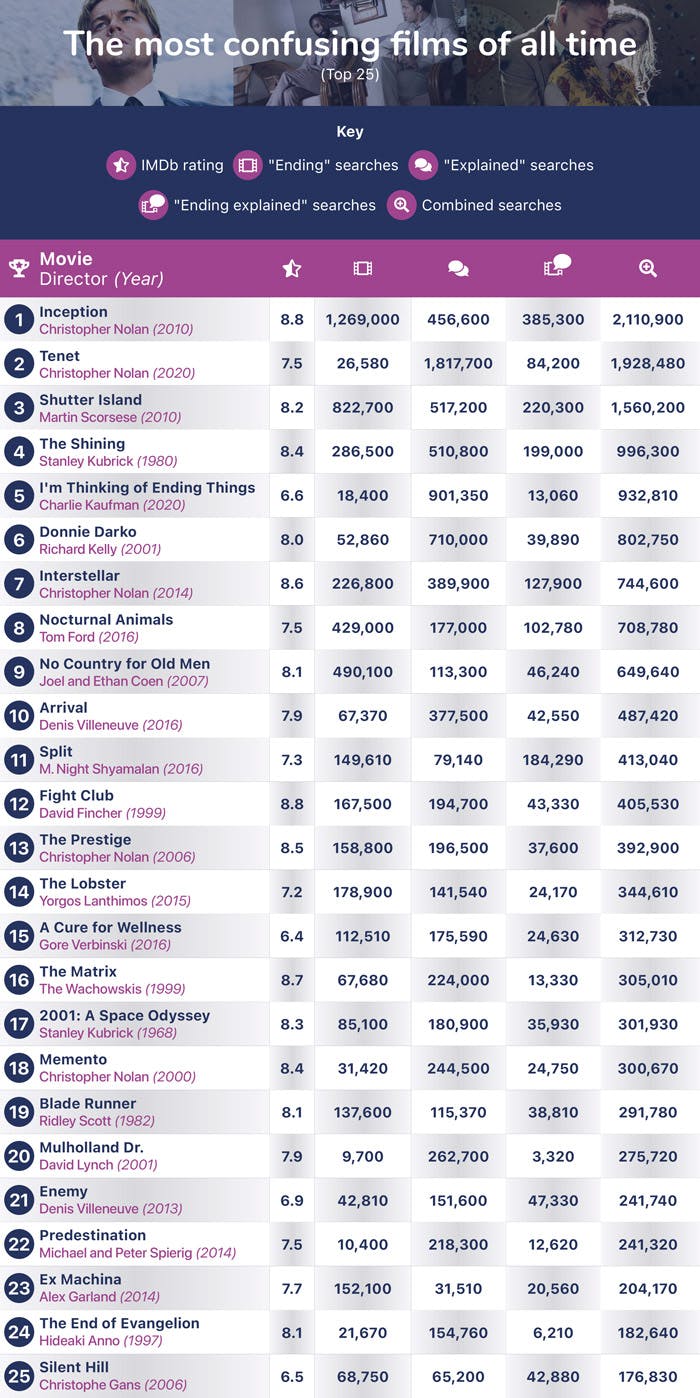 So these are the most confusing films of all time, but were they actually any good? You’d think that a plot that you need a Master’s degree to even understand would be a pretty quick way to turn audiences off, but judging from the IMDb ratings of our chosen films, that’s actually not the case. 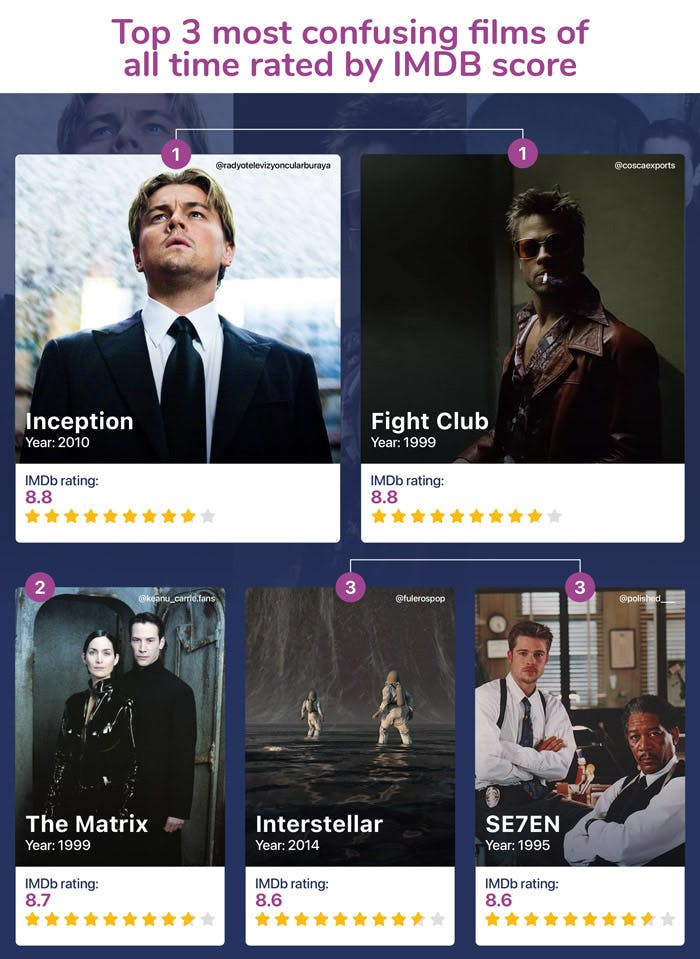 In fact, the films hold an average rating of 7.2, which is pretty impressive! And in fact, the most confusing of them all was also the highest-rated, with Inception holding a viewer rating of 8.8 (sharing the top spot with David Fincher’s Fight Club).

In third place was the Wachowskis’ iconic sci-fi action movie The Matrix with a score of 8.7, followed by another couple of films by Nolan and Fincher on 8.6 (Interstellar and SE7EN), with other highly rated (but confusing!) films including The Prestige, The Usual Suspects, The Shining and Memento.

However, not all of these films quite managed to hold their audience’s attention, with some of the worst-rated films on the list including Nicholas Cage thriller Left Behind (3.1), 2002 horror FeardotCom (3.4) and Tommy Wiseau’s The Room (3.7) which might not be confusing in the same way as many of the other films on our list, but within seconds will certainly leave you wondering what on earth is going on.

The most puzzling film directors

You may already have noticed that some directors are definitely showing up more than others when it comes to these films. So which are the filmmakers that go out of their way to confound us the most? 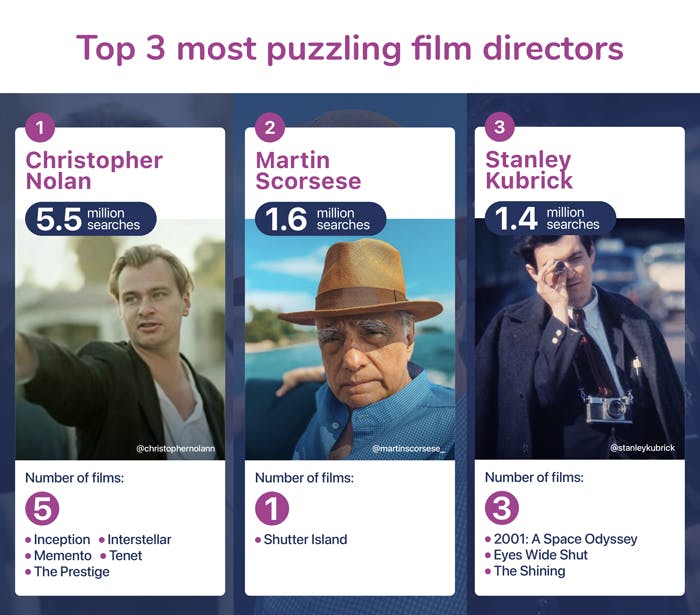 As we’ve already seen, Christopher Nolan is well known for thought-provoking films that often bend time and physics, so it’s perhaps not surprising that he and his films rank so highly on our list.

From science-heavy flicks such as Inception, Interstellar and Tenet to ones that rely on unexpected narrative structures like Memento and Dunkirk, Nolan has certainly directed some of the best films of the last 20 years, and broken new ground for blockbusters. But they’re sure to mess with your head!

Number of films: One

Martin Scorsese is known for a wide range of films from genres such as crime, sport, musical drama, and black comedy. But there’s one film in his extensive repertoire that flummoxed audiences: Shutter Island.

It was the only Scorsese film to feature on our list but it’s clearly one that many people struggled to understand, with over 1.6 million searches.

The Stanley Kubrick movie that probably comes to mind when you first think of the iconic director is The Shining, which certainly got audiences thinking, especially with its twist ending.

However, two other films from Kubrick appeared on our list too: 2001: A Space Odyssey, another film with a much-discussed ending, and 1999’s Eyes Wide Shut. 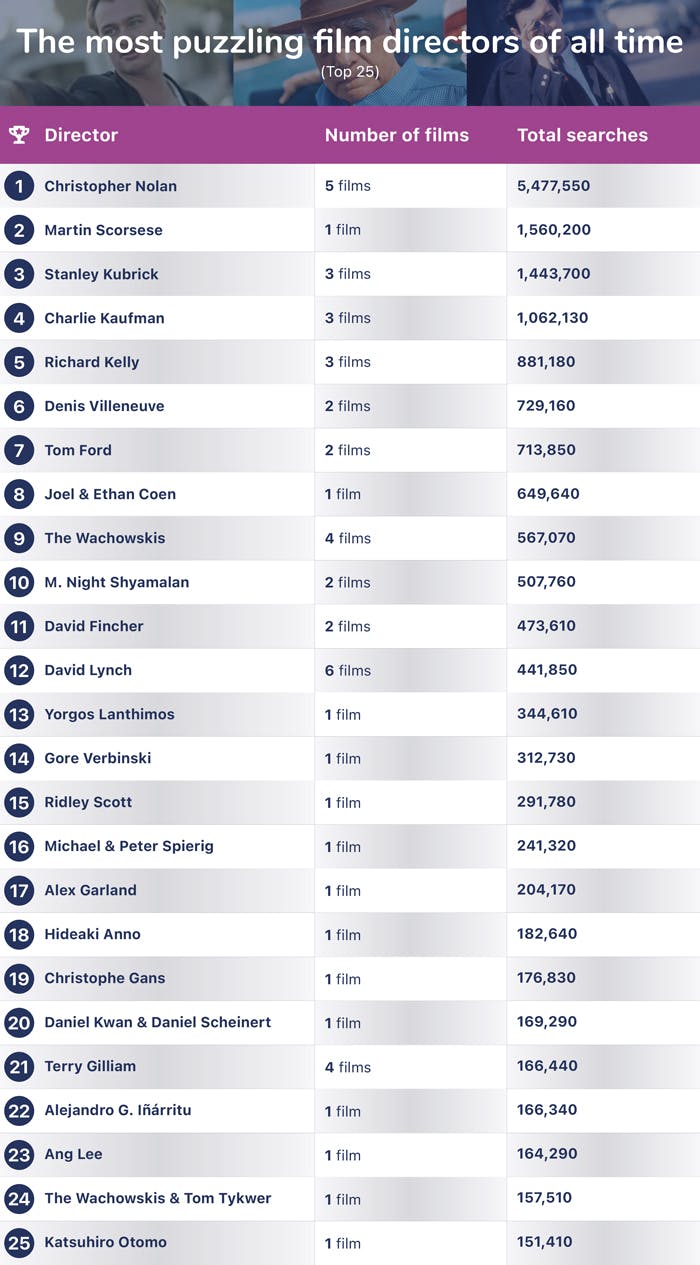 The most confusing year for film 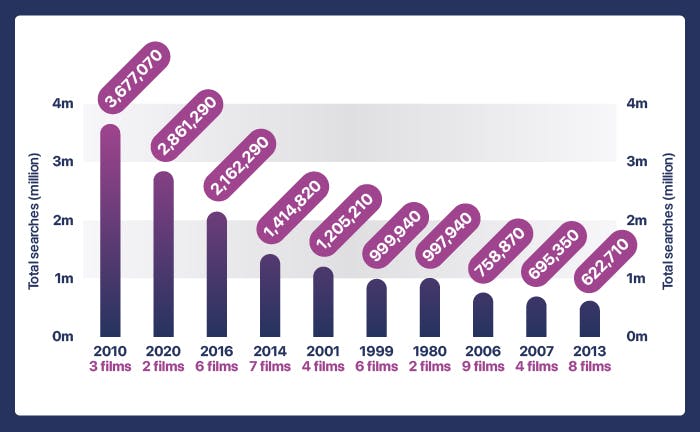 After watching a movie that’s left you scratching your head, you’ll probably want your next trip to the cinema to be a nice relaxing affair that requires minimum brain input.

But that wasn’t the case for moviegoers in 2010, which saw the release of Shutter Island in March, but just as you thought you’d about got to the bottom of the island’s mysteries, Leo was back just four months later in Inception, ready to blow your mind again.

Rounding out the three confusing movies to be released in 2010 is one which you’re less likely to be familiar with, but when you hear the plot, you’ll see why it caused such bemusement. Rubber is a satirical horror film about a car tyre that comes to life and goes on a murderous rampage in the Californian desert. So nothing too out of the ordinary then?

We began by compiling a list of films considered to be confusing using the following articles:

We then used Google Ads’ Keyword Planner to find which of these films have had the most global searches in the last four years (April 2017-March 2021) for the following keywords before taking a to: