Our mortgage experts rank the healthiest countries and cities in the world, with good food, good company and good transport links all being great for the people who live there.
Share this guide

With the dawn of a new year come the hopeful resolutions made by many for a healthier lifestyle, along with a list of countries they plan to tick off of their bucket list. Many fail to turn these resolutions into reality, however, we’ve made it easy for you to achieve both of these goals this year.

We’ve put together a list of the 20 healthiest places to live in the world, and we could even help you compare mortgages to save money if you plan on making the move.

Our report is based on life expectancy, the cost to be healthy, air pollution, obesity rates, safety and sunlight hours. 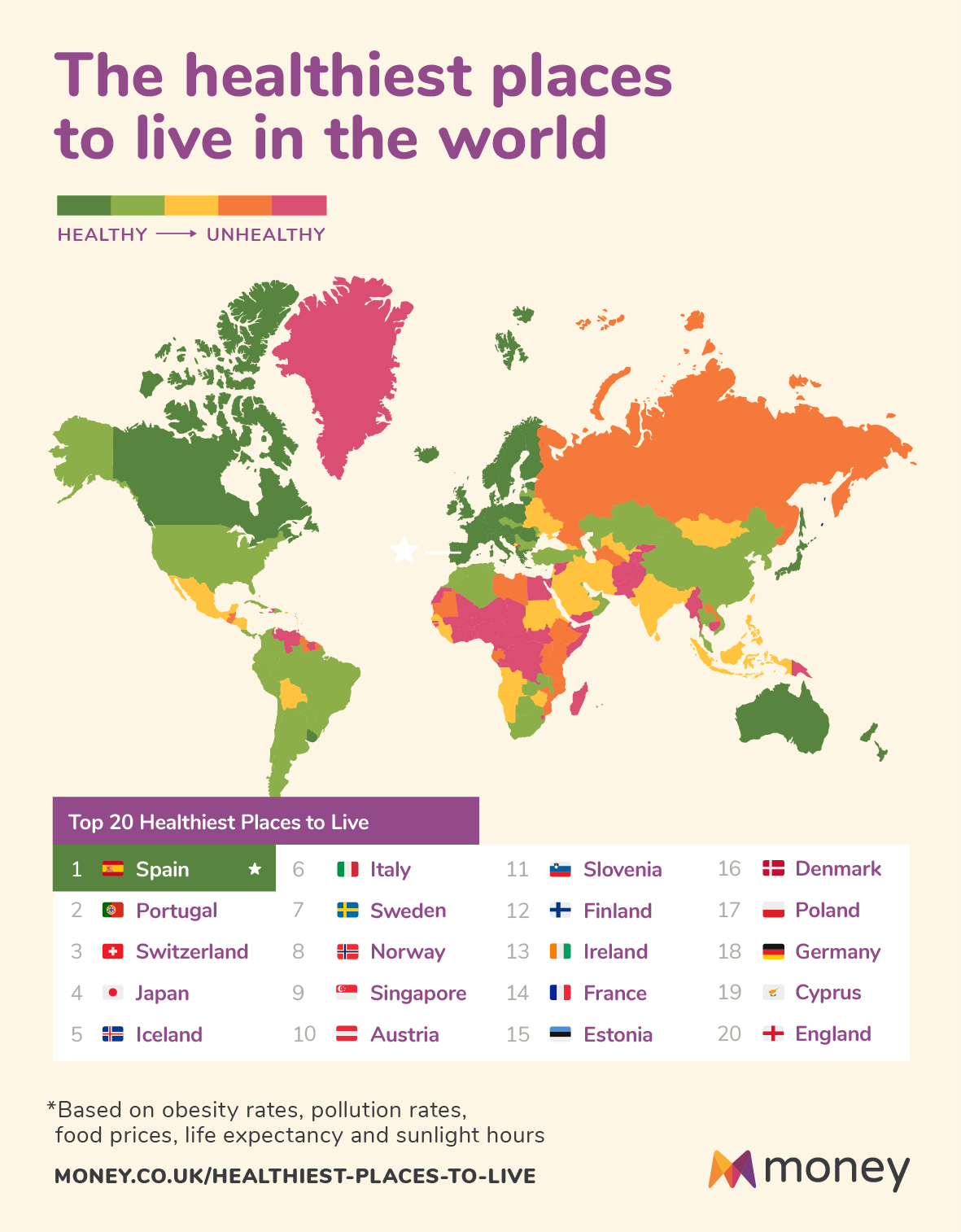 Spain is the healthiest country in the world

Spain is officially the healthiest country in the world, ranking number one on our index. In Spain, the people follow a Mediterranean diet consisting of healthy sources of omega-3, fats and protein, which studies have associated with a decreased risk of dementia, heart disease and cancer - placing the country in the top five for greater life expectancy.

A Mediterranean lifestyle follows these key principles: sociable meal times, a balanced diet and an emphasis on walking as a mode of transport, which helps to lower deaths caused by pollution. Sociable meal times have been found to decrease the risk of obesity and also promote a healthy mental wellbeing. Having a dedicated time to connect with family and friends acts as a mood booster, produces endorphins and increases the overall wellbeing of the population.

The people of Spain live by the saying, “Trabajamos para vivir, no vivimos para trabajar” meaning “we work to live, not live to work”. Their cost of living is moderate. A two bedroom property costs on average £142,000.00, which is more affordable than most European countries. 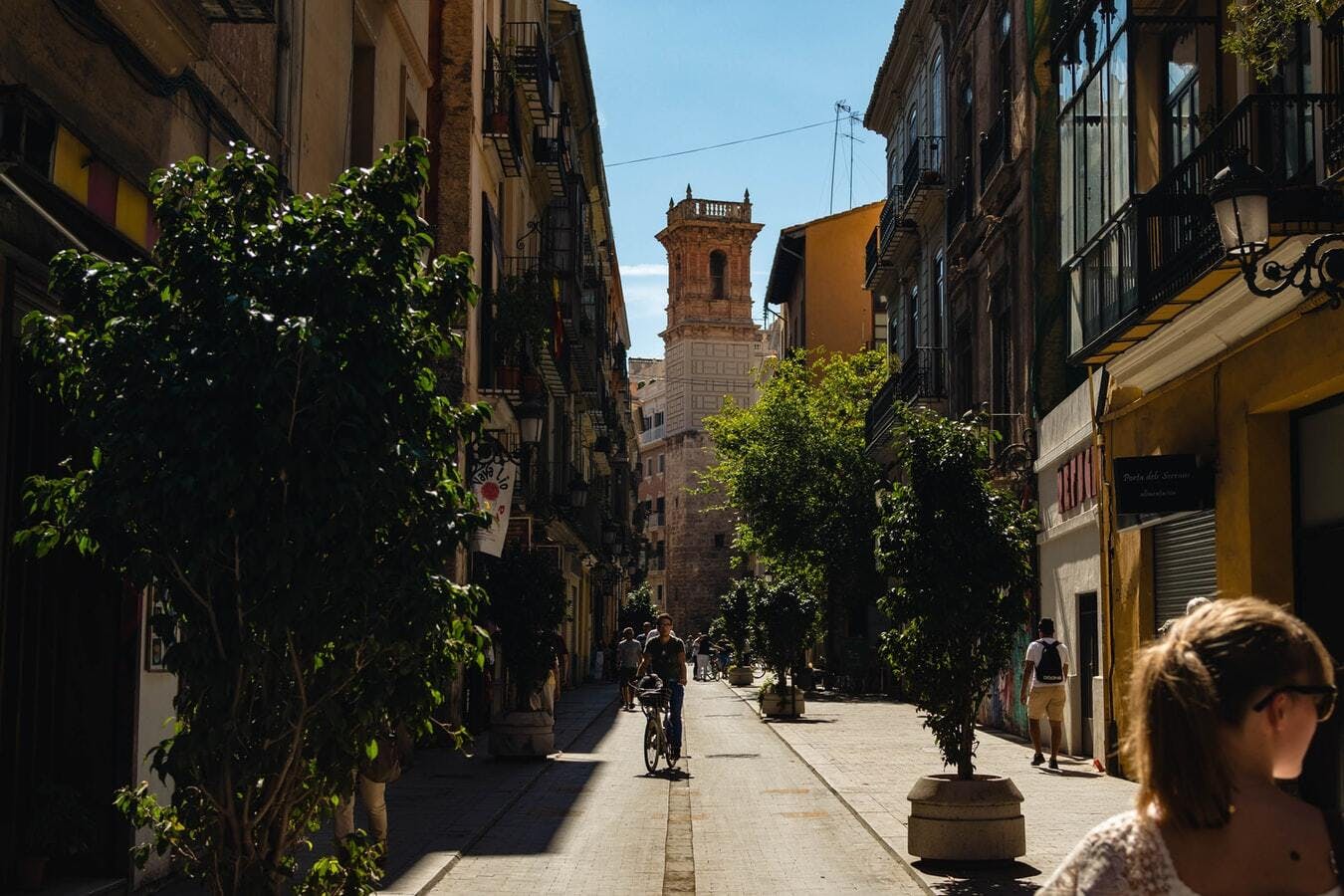 Japan is home to the world's oldest living person

Maybe we could all take a page out of Japan's book and eat a little less and walk a little more, as they have one of the highest life expectancies in the world! As well as their smaller portion sizes and protein dense diet, the people of Japan also show a greater respect towards their food, allowing time to prepare, cook and eat, contrasting from the westernised fast food culture. Cost of living is high in Japan, with the average two bedroom property costing £391,000, however the quality is usually equally matched with the price.

Japan is also well-known for its fast public transport, which produces low carbon emissions and thus Japan ranks as the 8th lowest country for deaths caused by pollution. With their preferred method of transport being walking, their daily activity is enough to keep them fit without the use of a gym, and awards them with one of the lowest rates of obesity in the world.

Perhaps if we all adopted these healthy habits, we too could live to be 117 years old like Japanese citizen Kane Tanaka (the oldest living person in the world). 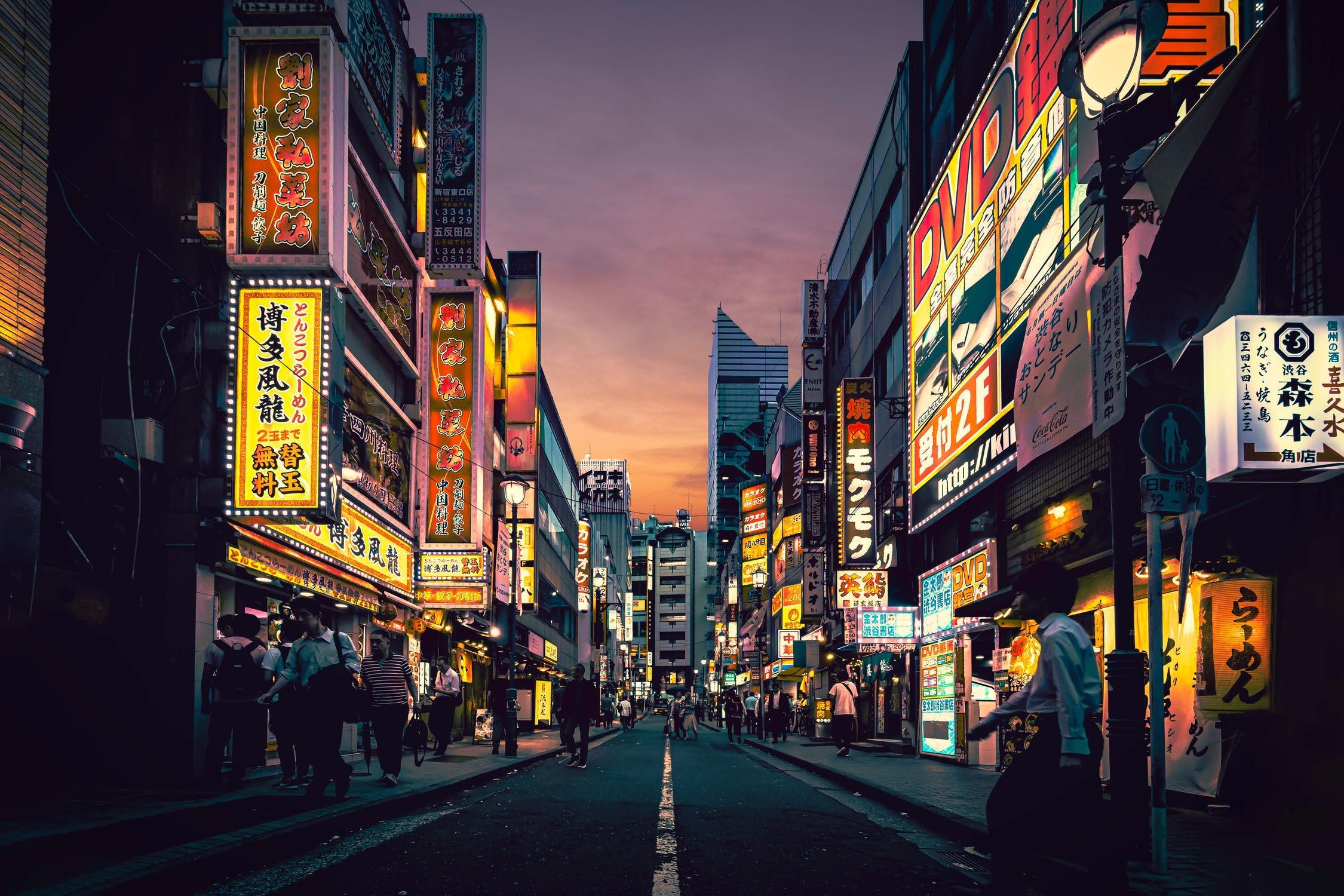 In the UK 64% of adults are overweight

Britain leads one of the more unhealthy lifestyles in comparison to other developed countries, placing the UK 20th in the healthiest countries index. Worryingly, the majority of adults in the UK are overweight; 67% of men and 60% of women. Britons are more likely to be obese due to a high food and alcohol consumption, as well as a lack of physical activity due to our culture. On average, an adult in Britain consumes 9.7 litres of pure alcohol a year, which is almost a litre over the OECD average.

The UK also places fourth lowest on yearly sunlight exposure out of 133 countries. According to the national sleep foundation, extended periods of time in artificial lighting can cause serious sleep deprivation which could impact our health dramatically. Vitamin D from the sun helps to regulate the amount of calcium and phosphate is in the body, and is vital in keeping our bones, teeth and muscles healthy and strong.

The cost of living in the UK is also seen as expensive, as an average two bedroom flat costs £254,000. Being one of the harder countries for people to become financially secure only encourages crime and homelessness which overall decreases the country's value of health.

The US is one of the least healthy countries

The US has one of the highest obesity ratings, placing it 153 out of 166 countries on our obesity index. In such a fast-paced world, western culture has adapted to eating highly processed foods full of artificial chemicals, fats and sugars. These kinds of diets increase your risk to many health problems, such as type 2 diabetes, and also lower your average life expectancy.

The most prevalent difference between countries like Spain and Japan to the US is the relationship towards food. Many of the healthiest countries on our index have a greater respect toward food, and treat meal times as a chance to create a social and loving environment. This contrasts greatly to the fast paced nature of the US who buy food for a quick fix - like ready meals and fast food.

Unlike Spain, whose main focus is on their social life, the US prioritises their work life which can lead to unhealthy eating habits and a lack of physical activity. Evidently, it is these cultural differences that hugely determine whether a country leads a healthy or unhealthy lifestyle. What they do have in common however is affordable living, with the average two bedroom property in the US costing an affordable £119,000. 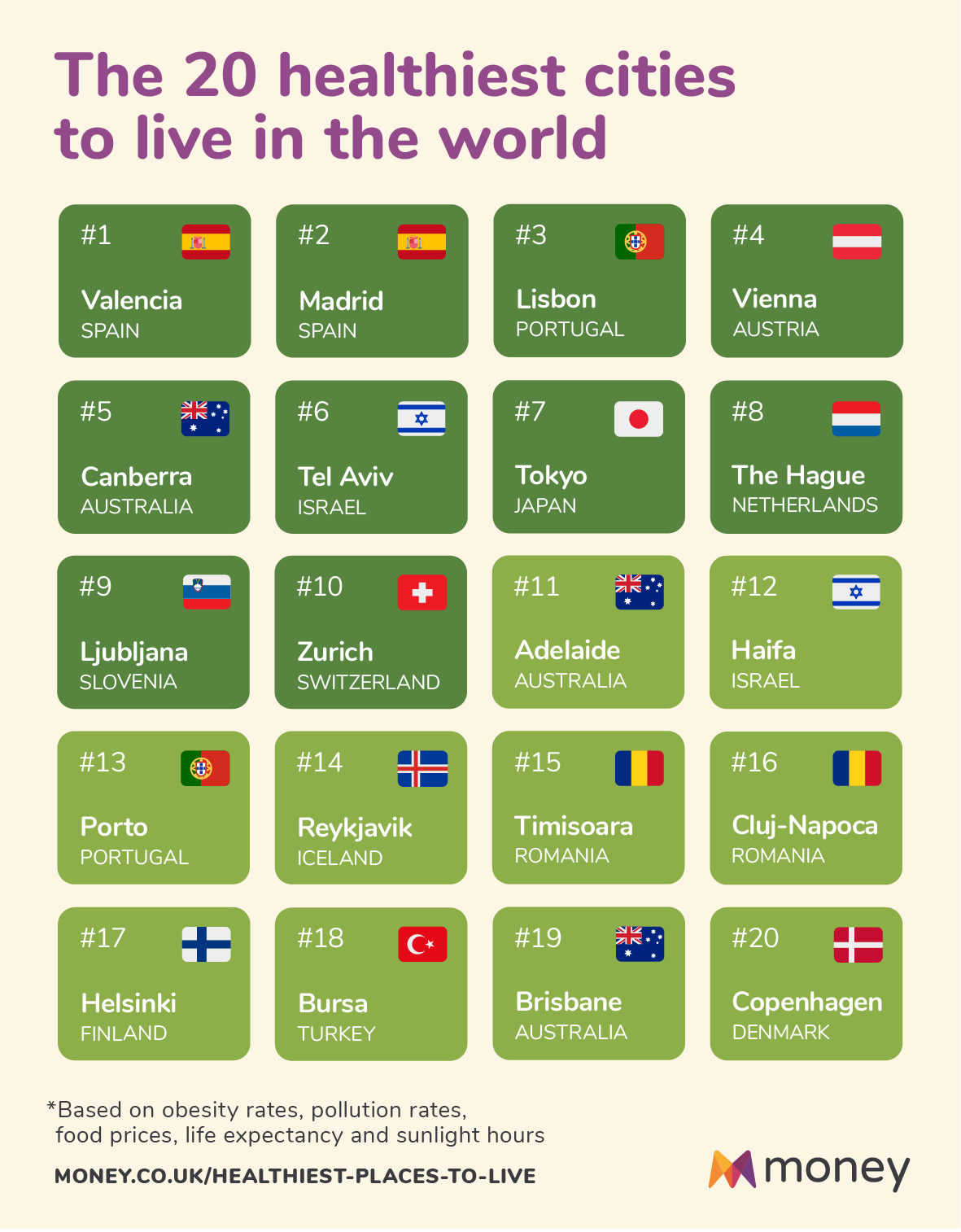 Valencia is the healthiest city in the world

Valencia is more than just a city famous for its Paella, it is also the healthiest city in the world! This beautiful Spanish city places joint third on our index for greatest life expectancy due to an array of lifestyle factors.

Firstly, this city has the ideal climate. It’s not too hot and not too dry, so there is plenty of greenery to provide clean air. Valencia also has lots of sunshine, so you can easily absorb that all-important vitamin D needed to keep your muscles strong. The sea breeze helps to blow away excess pollution in the air and their diet is also well balanced. Valencian paella is a great representation of their diet. Their famous dish has excellent nutritional value from fresh produce, is low in fats and high in omega-3 and protein from the fish.

Like many of the healthiest countries, this city also promotes an easy-going and relaxed lifestyle. It is renowned for its musical and cultural heritage and encourages social interaction. Rather than being defined by their jobs like many other cities, the people of Valencia define themselves by making personal and meaningful connections with their friends and family, ultimately creating one of the healthiest communities in the world.

Edinburgh is the only city in the UK that has managed to come close to a place on our index. This beautiful city had good scores across all lifestyle factors, ranking it 41st - just one position below the top 40.

As well as being the greenest city in the UK, Edinburgh's quality of air is also one of the cleanest in the world, ranking them in 37th place. Edinburgh prides itself on having more trees per head of the population than any other UK city, and has pledged to be a ‘million tree city’ by 2030, which will continue to reduce its pollution levels.

The city's healthcare system also ranks highly, coming in at 8th place in the world! The people of Edinburgh are incredibly lucky that they are all eligible for comprehensive free healthcare from the NHS, which is regarded as one of the best healthcare services in the world. 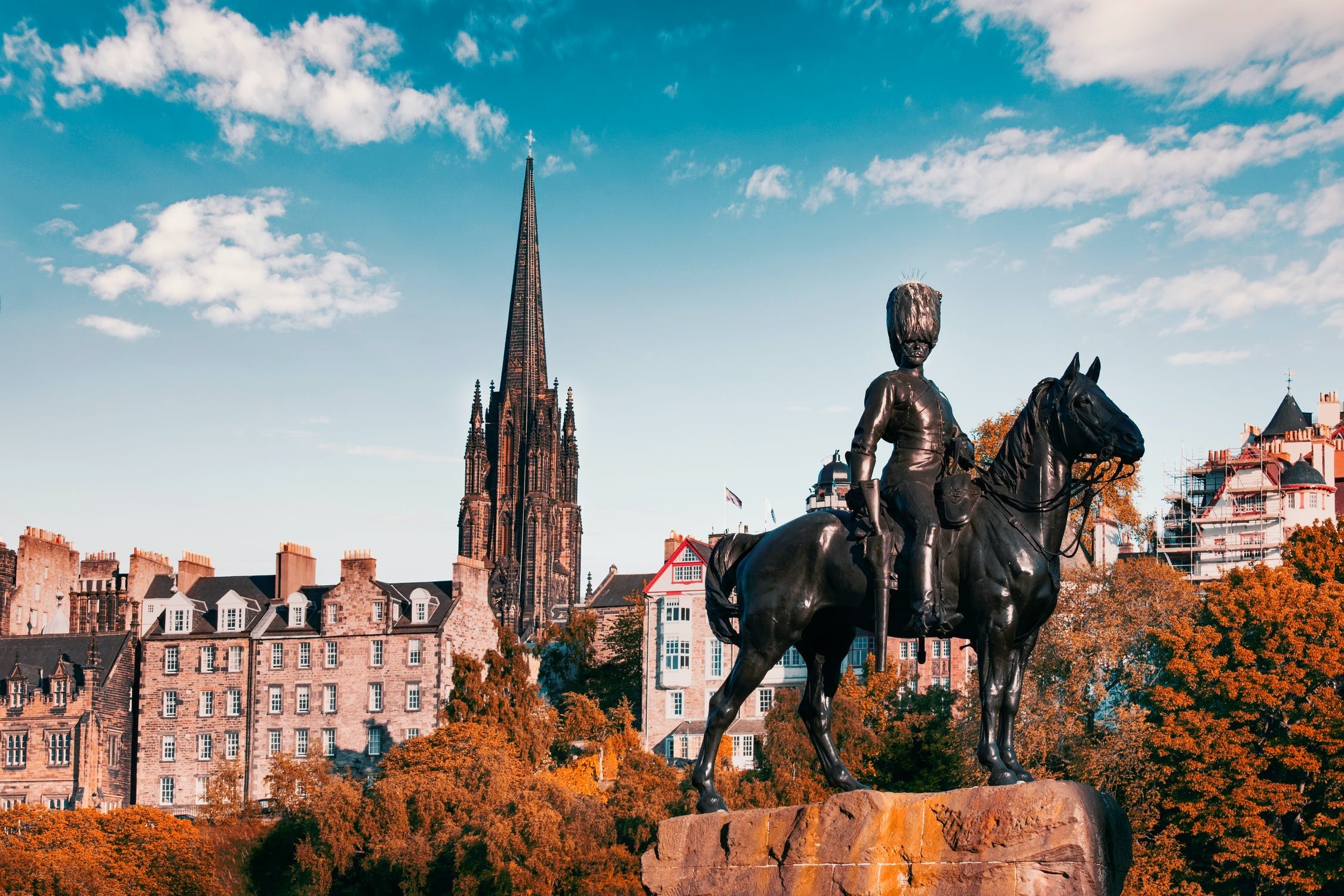 Helsinki has the cleanest air in the world

The city of Helsinki in Finland is the 17th healthiest city in the world, and is miles ahead of the rest when it comes to protecting the environment and reducing air pollution. The city's strong environmental regulations limit the amount of harmful practises to the environment, and create some of the cleanest air in the world. By 2035, Helsinki has pledged to be carbon neutral as well as legislating the end of using fossil fuels by 2029 - a massive step toward creating an even greener carbon footprint!

To achieve this goal, the city invests in renewable energy sources and designates forest reserves as a way to provide natural wood-based fuels, like hydropower and wind power. They also promote the use of electric vehicles and have the second best transport system in Europe, which all contributes to cutting down their carbon footprint and reducing the amount of pollution in the air.

Helsinki is also considered one of the safest cities to live in with a crime rate being nearly non-existent. One report even claims that if you were to lose a wallet in the city, 11 out of 12 times it’ll be returned to you. 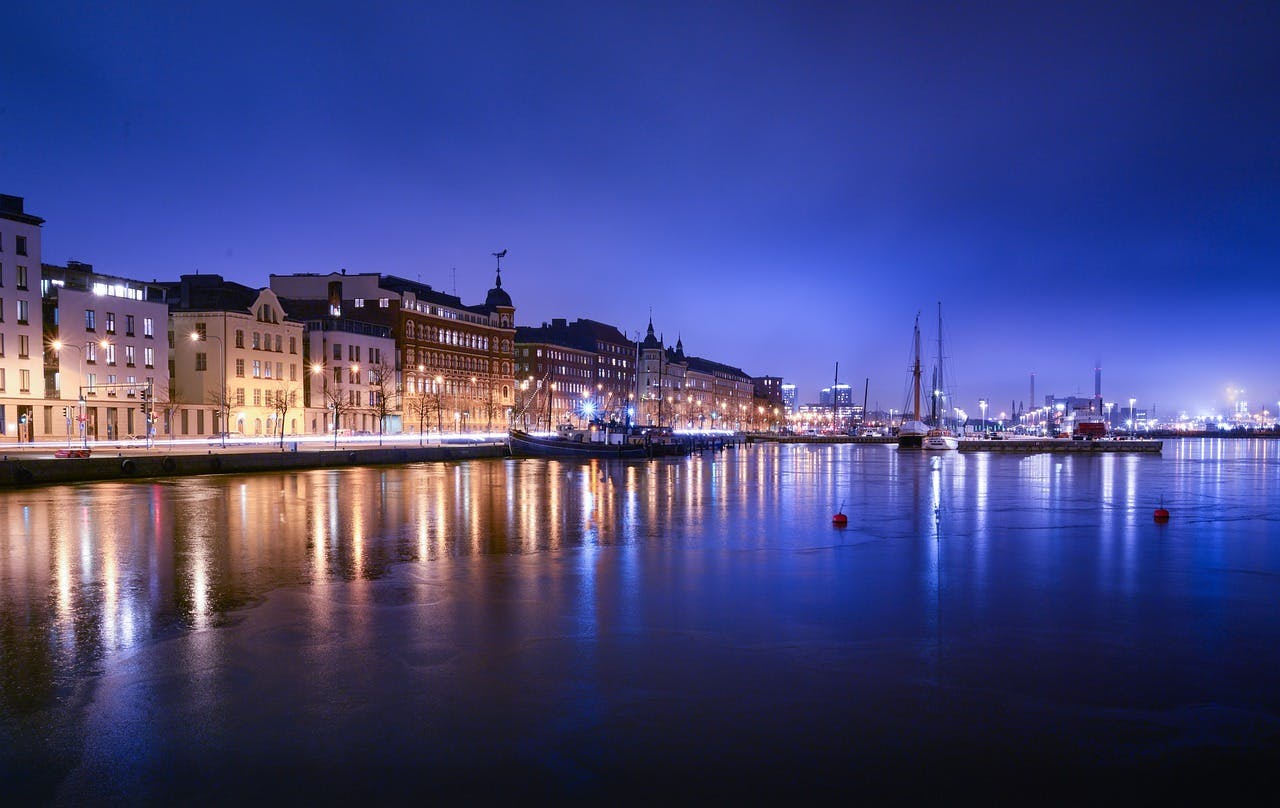 Zurich, Switzerland is one of the safest cities in the world

The crime rate across the city is extremely low, placing Zurich in the top five lowest crime rate cities in the world! Due to good education and being a good welfare state, many people living here are able to live sustainably without the need for crime.

In fact, the city's overall lifestyle is considered to be one of the healthiest in the world, ranking 10th overall on our index. The city has the second highest life expectancy in the world after Japanese cities, which could be as a result of their commitment to reduce pollution from transport and promoting healthier alternatives. This city also places in the top 10 for cleanest air quality, reinforcing just how healthy Zurich is at all levels.

The top 40 healthiest places to live 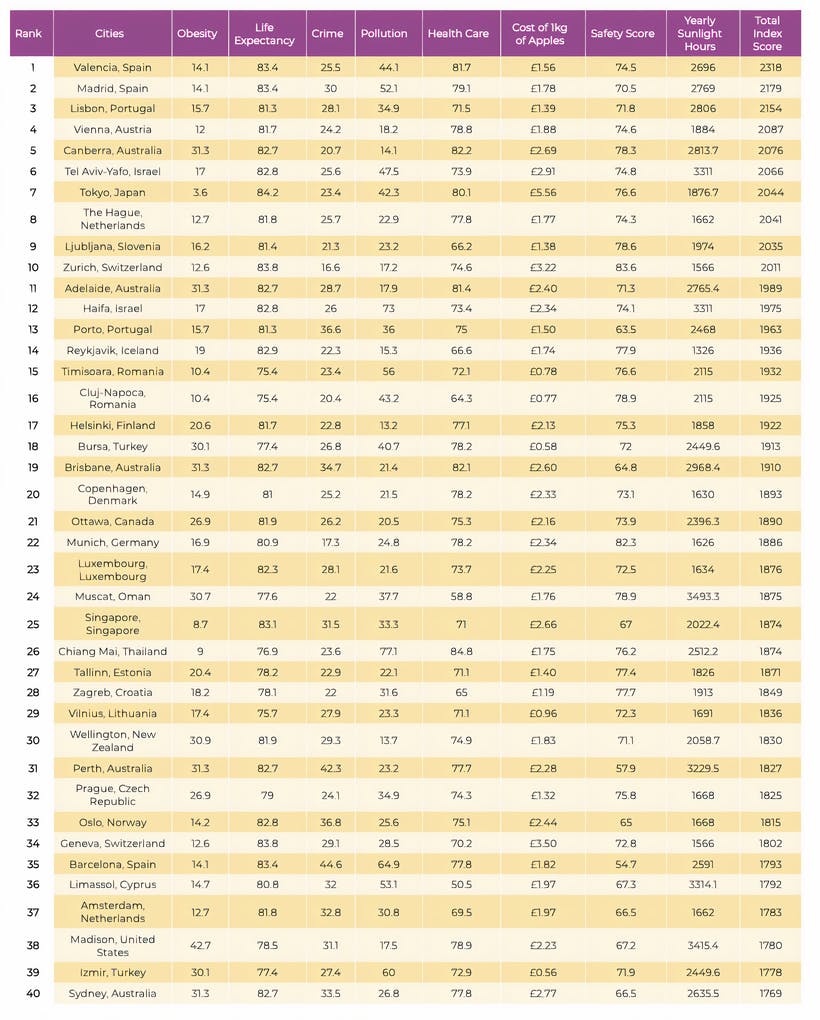 Moving to a healthy city

If you are looking to move to a healthier city in the UK, make sure you compare mortgage deals to get the best option for you.

Individual data rankings for cities were taken from the following sources

Following this, each ranking was collated and compared with one another to create a finalised ranking for each city. All locations were compiled using ranking factors of life expectancy, cost of healthy foods, deaths caused by air pollution, crime rates, hours of sunlight per year and obesity levels.

Once ranked, the top 20 countries and cities were collated to be the healthiest places to live, and average property prices are based on the cost of a two-bedroom apartment.