How to get a refund on train tickets

Fact Checked
If your train journey is delayed or cancelled, you might be able to get your money back. Here’s how.
Share this guide 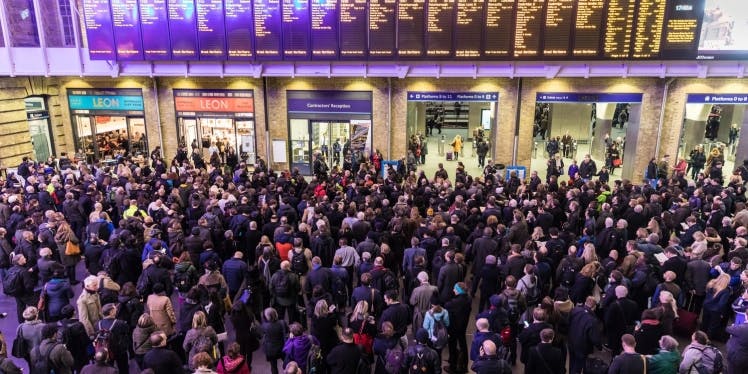 Train delays, strikes or even cancellations can be extremely frustrating, especially when they ruin your plans or make you late. The good news is, you might at least be able to get your money back. The rules on refunds depend on precisely what happened – including how long delays are. Here’s what you need to know:

When can you get a full refund on train tickets?

To get a refund on your train tickets, you need to claim within 28 days of the date you were supposed to travel.

If your journey is cancelled for any reason, you can get a full refund from the train company you were due to travel with.

You need to keep your unused ticket as proof. If you're asked to send in the original ticket with your claim, be sure to keep a copy of it, in case it goes missing in the post.

What are your legal rights to a refund?

What if you choose not to travel?

If you decide not to travel simply because you’ve changed your mind, you’re unlikely to get a full refund. However, depending on what kind of ticket you bought, you might be able to cancel and get most of your money back.

Sometimes you will be asked to pay a £10 cancellation fee to do this. And be warned, some advance tickets and special offers may be non-refundable, so check the terms and conditions of the train operating company.

You're more likely to get a full refund if the train you were intending to take is delayed, or your reservation is not available. In these cases, you can argue that the train company failed to deliver rather than that you changed your mind.

When can you get compensation on your train tickets?

Whether you qualify for compensation depends on the train operator you’re travelling with. Most are signed up to Delay Repay (see below), which means you should get some money back if a delay to your train makes you more than 15 or 30 minutes late.

Companies that aren’t signed up for Delay Repay don’t have to start giving refunds unless you’re an hour late. Often, they also say you can’t claim if the cause of the delay was not the operator's fault. For example, you could claim for delays caused by staff shortages, but not for delays caused by bad weather

The delay refers to the arrival time, not the departure. You would not be entitled to compensation if your train left 20 minutes late but only arrived 5 minutes after its scheduled arrival.

By the same token, a five-minute delay to your train that means you miss a connection and arrive more than an hour late could qualify you for compensation.

What is Delay Repay?

This is a voluntary scheme that lets you claim compensation if your train is delayed for any reason – including bad weather.

You’re entitled to compensation of up to:

Here are the train companies signed up for Delay Repay:

Some train companies are signed up to an even better scheme called Delay Repay 15.

Under this scheme, you get compensation if your train is late by more than 15 minutes.

You’re entitled to compensation of up to:

Here are the operators signed up to Delay Repay 15:

The refund rates for both Delay Pay schemes change if you have a return ticket or if you’re a season ticket holder.~

How much money will I get refunded?

Exactly how much you’ll get depends on whether you’ve bought a single or return ticket, if your operator uses Delay Repay and whether you’re claiming on a season ticket.

The Delay Repay scheme has a tiered refund policy. For single or return journeys, some offer:

And the Delay Repay for season ticket holders may be:

You will not get the same amounts as Delay Repay thresholds if the train operator is not part of the scheme. Typically, the refunds on offer are:

Can I get a refund for poor service?

You can also claim for service problems on your journey, like:

Keep a copy of your tickets and take photo evidence of any problems you experience on your journey. Then email them to your train company's complaints team, by searching their contact details on their website.

The amount you get is down to the train company's discretion. They are not legally obliged to give you a refund. But you could still get money back as a goodwill gesture.

Can you claim compensation on season tickets?

As well as the Delay Repay for season ticket holders, you could also get a renewal discount.

This applies to monthly or annual season ticket holders who've experienced 'sustained poor performance'. The criteria for this varies and depends on your route and operator. Check with your train operator directly to find out if you qualify.

Can you get refunds during train strikes?

You can get a full refund if any part of your train journey is cancelled due to strike action.

You'll also be given the option to travel on a different train, without changing your ticket.

You can choose between:

The travel conditions of your original ticket will still apply. For example, if you have an off-peak ticket, you can only travel at off-peak times.

Most train companies put on replacement services during strikes. Unfortunately, can only claim for delays to your journey if your replacement travel is affected.

How are train refund claims paid?

If your claim is successful, your train company will refund the money into the account you used to pay for it, it or by cheque.

You have the right to demand cash for train delays and cancellations. Don’t be fobbed off with train vouchers!

What if your claim for a refund is rejected?

If you are unhappy with the response you get from your train company, you can log an official complaint with them.

Read how to write a complaint letter.

If you are still unhappy, you can escalate your complaint to Transport First or the Office of Rail and Road (ORR).