The term IPTV might sound unfamiliar, but you’ll already have used this form of technology if you’ve ever watched internet TV via your broadband connection. Below, we consider how internet protocol television works, and provide a brief summary of the benefits. 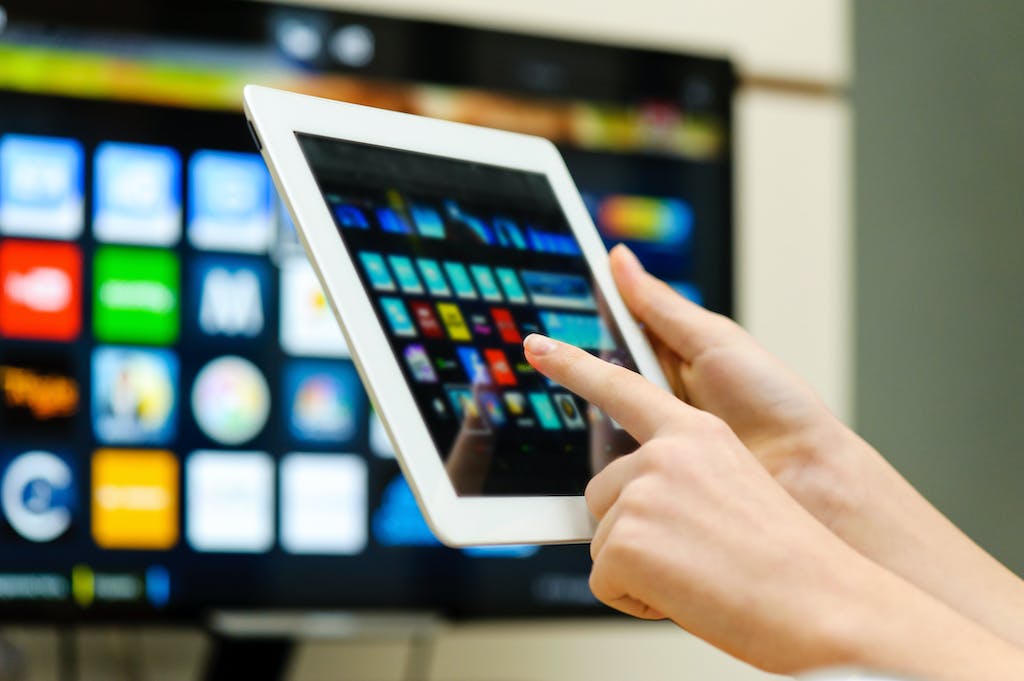 What is IPTV used for?

Internet protocol television uses the internet protocol (IP) to transmit television programming on-demand – hence IP TV. The first part of its name is the same IP acronym referenced in VoIP services like video messaging, or in your computer’s IP address. In reality, the term IP TV is rarely written as separate words, though you might see IP TV appearing on some provider websites.

Cable and satellite television platforms provide alternative ways to access digital TV in the UK. With these methods, viewers receive radio signals sent out by broadcasters, watching what’s available as it’s transmitted. Content might be distributed along a fibre-optic cable, or through the radio waves from a satellite in space.

In the case of IPTV services, content is delivered using an internet connection. This allows you to pick and choose the type of programming you’d like to watch, without having to follow a set schedule as you would with a TV station. Because the content is stored on servers, it can be retrieved over the internet whenever you wish.

It’s important to note that IPTV doesn’t refer to the device you’re watching your content on – any web-enabled device should be able to display such content. It simply refers to the way data is distributed over the internet.

You may already use digital catch-up services like YouTube, Netflix, BBC iPlayer and 4oD on your laptop, which are quite similar to IPTV. However, IPTV often gives the additional advantage of watching live TV as it’s broadcast, as well as streaming or downloading video on demand. And rather than solely streaming your choice on a computer, you can watch it on TV as well.

IPTV is frequently offered as part of a bundled broadband and TV package, with a set-top box delivered by your service provider. This transmits a wide range of digital channels directly to your television.

How does IPTV work?

Firstly, you’ll need to connect with an internet protocol television provider to use this type of service. Major providers like BT, Sky, Virgin Media and TalkTalk will send you a set-top box, which transmits the programming of your choice directly to your television. These boxes act as an adapter between the internet connection and television receiver, translating incoming signals to display programs from the internet on your TV.

On a technical level, broadcasters and telecom companies need to have a storage system that’s complex and secure enough to store high volumes of data for easy retrieval, with a user-friendly interface allowing customers to pick and choose their programmes.

If you’re keen on IPTV services, you may need to upgrade your broadband to fibre, or investigate the fastest service your address can support. Our guide on how to choose broadband covers areas like download limits, traffic management policies and varying speeds.

Video files must be encrypted and encoded in streaming-friendly formats, which can be accessed simultaneously by millions of users in the case of blockbuster live events. So how does IPTV meet these demands?

Video is broken down into data packets for easy transmission over the internet. These individual packets are stored on secure servers, and transmitted at high speeds through fibre-optic cables to each household. Using Internet Protocol as a mode of communication, requests are sent out from your set-top box, and packets are returned in milliseconds. Each packet will follow the fastest route available to it at that millisecond, before being reassembled into a coherent stream of content on your device.

The set-top box decodes and decrypts the packets of video programming, displaying them on your TV screen in order. Connected to your wireless router, the box uses broadband to deliver video and TV content at high speeds. What these speeds are will depend on your service provider, broadband package and geographical location. Faster broadband connections tend to support IPTV with minimal buffering or picture degradation.

Content is stored in a variety of different pixel ratios (known as adaptive bitrates), and the host server will send the highest-definition files your connection can support at any millisecond. That’s why you sometimes notice IPTV content turning blocky and pixelated, because line congestion has caused the provider to send you lower-quality data packets for a few seconds. It’s also why programming may be blocky as it starts playing, because your device hasn’t had a chance to build up a buffer of high-quality data yet.

IPTV services are delivered in a variety of formats:

If you’ve ever watched a series on Netflix or Amazon Prime, you’ve already used a Video on Demand, or VOD service. As the name suggests, this type of streaming service allows you to pick and choose from a menu of television and film options. Click your title of choice, and you’ll receive instant access to its contents via the internet.

Many people use the term IPTV meaning time-shifted media. Many set-top boxes also include a catch-up TV feature which allows you to pause, fast-forward, rewind or record your shows. However, the difference between time-shifted media and VOD is that you’ll have a brief window of time to catch up on your programme – it may not remain available indefinitely. On Sky, for instance, paused content will reset to real-time broadcasting after an hour.

The third type of IPTV service is live broadcasting, from concerts to sporting events. This is akin to any live broadcast, but instead of being transmitted by satellite, the video is sent over the internet.

Many leading broadband providers include IPTV UK services. Here are a few examples of what’s currently on offer.

You can also opt for standalone devices like the Amazon Fire TV stick. This particular USB stick plugs directly into your television, and lets you access online video content including BritBox.

What is IPTV meaningfully good for?

The answer depends on the type of service you choose. With the success of VOD platforms like Netflix, media providers are working hard to offer customers a comparable level of on-demand content.

These are some of the benefits of IPTV:

When considering how does IPTV work for your household or family, the speed of your home internet connection is a key factor. An ADSL line with a maximum download speed of 11Mbps will be able to cope with one or two devices using IPTV services in standard definition, but nothing more. (This recent article explains what ADSL is and why it’s often unsuitable for IPTV services).

For multiple HD connections, you’ll need Fibre to the Cabinet or Fibre to the Premises (FTTC/FTTP) broadband with minimum connection speeds of 35Mbps – and ideally considerably higher.

How do I get IPTV?

Having established how IPTV works, the first step is to ensure you have the best possible broadband connection, for the reasons outlined above. You can compare broadband deals here, and boost your speed by looking for an alternative broadband provider.

When you sign up for a new IPTV deal, you’ll be sent a set-top box. This will either plug directly into your TV (like the Amazon Fire stick), or connect via an HDMI cable. Many media companies include a set-top box as part of a broadband bundle, so explore these options first.

There are several factors to consider while comparing IPTV UK packages:

Whether you’re a sports fanatic or a reality TV addict, you’ll gain access to content that you can watch from any location at any time. And as broadband speeds continue to increase across the UK, IPTV options are likely to flourish alongside them.