Where in the world are students most likely to enhance their career prospects with a good education? Our mortgage experts analysed academic performance, government funding, and enrolment rates to find out.
Share this guide

Education is, of course, of paramount importance, not just for ensuring that children get the best possible chance to succeed in life, but also for their personal growth and development.

There are a number of factors that can tell us how good an environment is for nurturing children’s education, but where are the best places in the world when it comes to encouraging learning?

Are you thinking about moving to a new country to study? Compare mortgages to find the right deal for you.

To find out, our mortgage experts have analysed countries around the globe on factors such as academic performance, government funding, and enrolment rates.

The countries with the best education 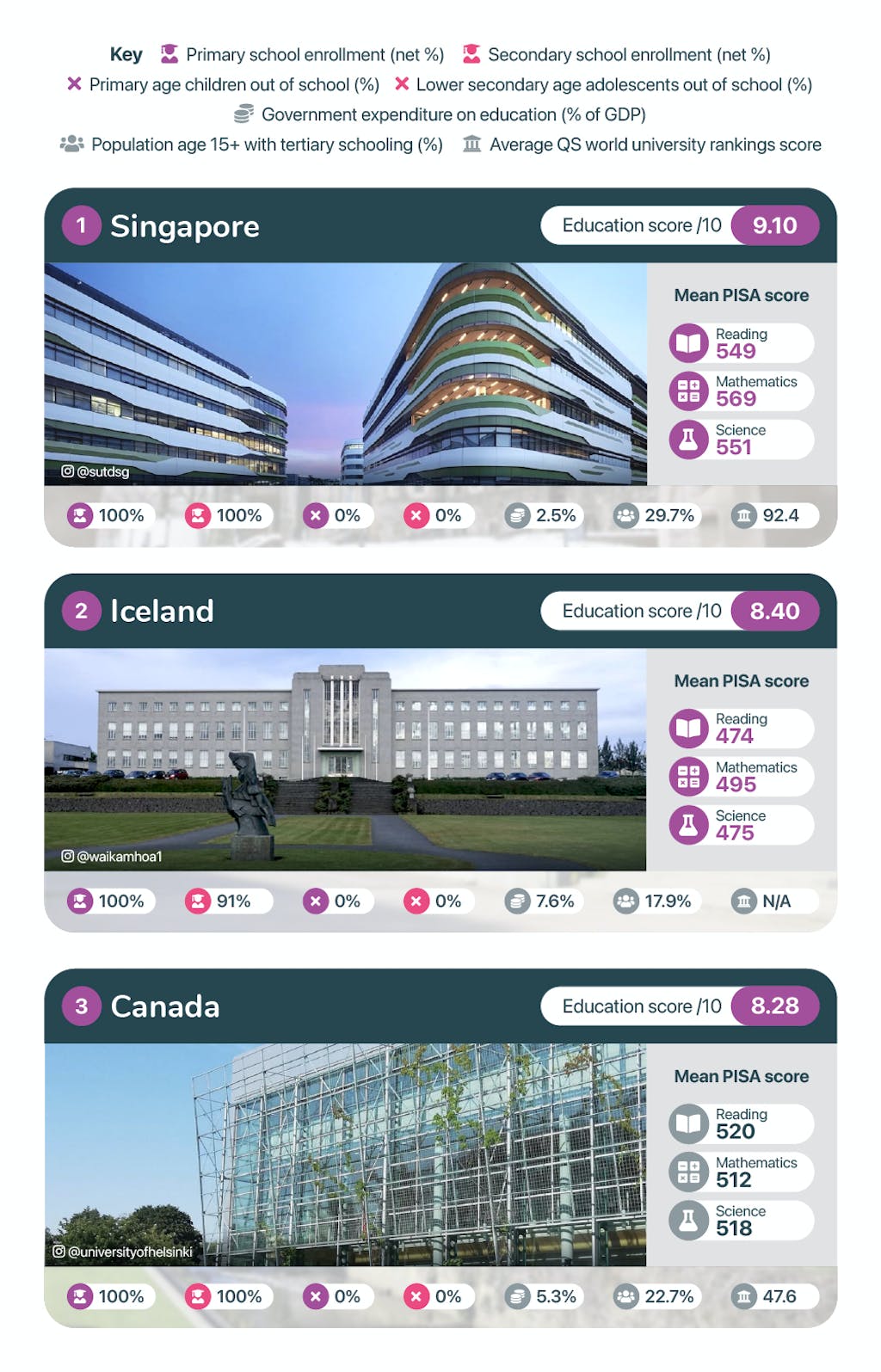 Taking all of the factors into account, Singapore ranks as the best nation for education, with an overall score of 9.10 out of 10. Singapore has a near-perfect record when it comes to school enrollment and the number of children out of school, at both primary and secondary levels, and is also the country with the highest level of people educated to tertiary (university) level, at 29.7%, as well as when it comes to academic performance.

The highest-ranked European nation is Iceland, scoring highly both for enrolment (100% at primary level and 91% for secondary) and government spending on education, which stands at 7.6% of the country’s GDP, second only to Denmark. Education in Iceland is compulsory for those between 6 and 16, with homeschooling not allowed, and most institutions being free to attend.

Taking third place is Canada, with an impressive record of nearly 100% enrollment in both primary and secondary school, meaning there are almost 0% of children out of education at both levels.

Education in Canada is, for the most part, provided publicly and is compulsory across the country, all the way up to the age of 18 in some provinces and territories. The academic performance of students in Canada is also amongst the highest in the world in terms of PISA scores. PISA is the OECD's Programme for International Student Assessment, which measures 15-year-olds’ proficiency in reading, mathematics and science, giving them a comparable score.

The best countries for…

While all levels of education are of course important, it’s at primary school where children develop the building blocks of their learning that sets them up for the rest of their lives. Six different countries had a primary enrollment rate of practically 100%, Canada, Singapore, Norway, Malta, Iceland, and Malaysia.

As well as having a perfect enrollment rate at primary level, Canada and Singapore also have a near-perfect enrolment rate at secondary school too, as does Kazakhstan. Secondary school of course covers the adolescent period of pupils’ lives, which marks the start of passage into adulthood and sees students undergo several significant milestones.

Primary age children out of school: (0%)

Ensuring that every child has the opportunity to go to school is a basic right, although in many countries there are children who don’t attend school. However, in total, 23 of the countries in the research can say that just under 100% of their children are in education at primary level, including the likes of Canada, New Zealand, the United Arab Emirates, Switzerland and more.

Government expenditure on education: (7.8% of GDP)

The commitment from the government to education is a big part of investing in the country’s future, and the nation that has the greatest spend in this regard is Denmark, spending 7.8% of its GDP.

While compulsory education usually ends around age 16 to 18, many choose to continue on to tertiary (also known as higher) education, at university or similar institutions. The country with the highest percentage of people educated to this level is Singapore, at 29.7%, with the country’s education system earning praise from around the world.

PISA is the Programme for International Student Assessment and is a worldwide study that takes place every three years and ranks more than 60 countries based on reading, maths and science tests undertaken by over half a million 15-year-old students, with Singapore topping the class in each subject. Teaching in Singapore takes a much more narrow but thorough approach, as teachers ensure that their students have a deep understanding of the syllabus before moving on.

Starting off by looking at all countries globally, money.co.uk whittled down the list to just over 60 countries based on the availability of the following data.

Money.co.uk looked at a range of factors relating to education, giving each place a normalised score out of 10 for each factor, before taking an overall average across each factor.

Government expenditure on education: The government’s spending on education, shown as a percentage of the nation’s GDP (2020 or latest year available)

Each of the above factors were sourced from the World Bank’s Education Statistics (EdStats).

Population age 15+ with tertiary schooling: The percentage of the population aged 15 and over that have completed tertiary education (2010), sourced from the World Bank.


Mean PISA scores: The mean 2018 PISA test scores of 15-year-old students for reading, mathematics and science according to the OECD (2018 data was unavailable for Vietnam, Trinidad & Tobago, Algeria, Tunisia and for reading in Spain, so 2015 scores were used in these instances). The PISA test is an OECD ranking that takes place every three years and evaluates a sample of at least 5,000 15-year-old students in each country in reading, mathematics and science.