The most beautiful five-star hotels around the world

There are so many hotels worthy of their five-star status, but which have drawn so many admiring glances for their beauty they’ve been Instagrammed the most?
Share this guide 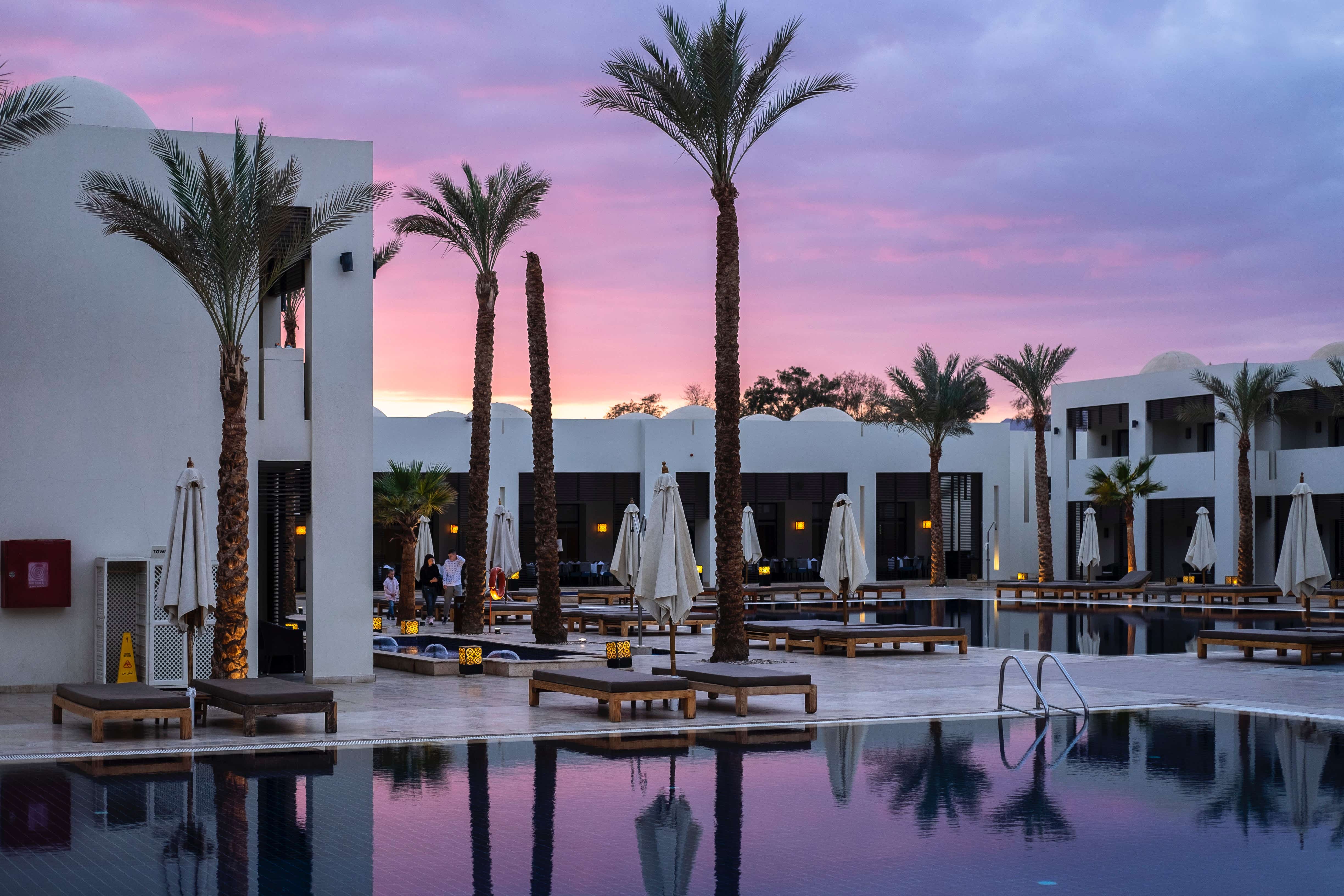 If you are after a life of luxury, then checking into a five-star hotel is a great way to get your slice of it. Whether you are a fan of stunning architecture, world-class service or fine dining, there are plenty of luxurious hotels on every continent waiting to impress you.

If you are planning on checking into five-star accommodation for your next vacation, consider a 0% purchase credit card to help spread the cost.

Our personal finance experts were curious to discover which hotel is actually the most admired in the world; so turned to Instagram to check. Analysing more than nine million Instagram hashtags associated with the world’s most Insta-worthy accommodation, they crowned the hotel with the most photos as the most beautiful in the world.

The world’s most beautiful five-star hotels 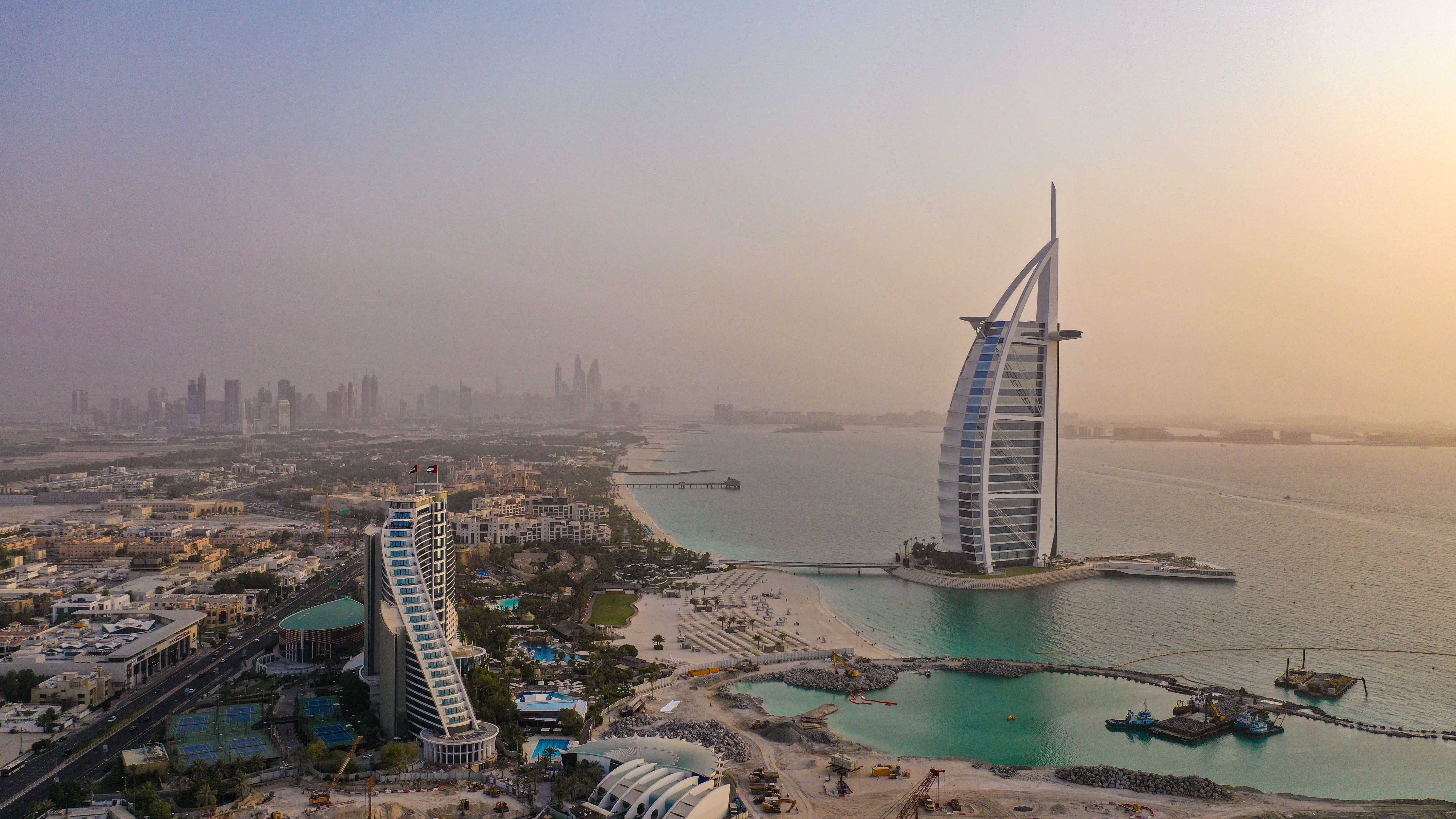 Dubai’s Burj Al Arab Jumeirah is officially money.co.uk’s most beautiful five-star hotel on the planet; though its official rating is a five-star, it is widely known as a seven-star hotel thanks to its extravagance. Not only will you be provided with a pillow menu (consisting of nine options) when you check in, but you will also be offered Rolls Royce chauffeur service and be surrounded by gold leaf walls. These opulent touches paired with the building being shaped like the sail of an Arabian dhow, the Burj Al Arab Jumeirah has been shared on Instagram 2,428,501 times.

Soneva Jani is the second-most beautiful on the list with 415,461 hashtags on Instagram. The wellness retreat in the Maldives earned their Insta-famous status for their villas that look as if they are floating on the water, as travellers admire the idyllic setting.

Most of the rest of the top 10 list is made up of hotels located in the United States; Bellagio (which is on the Las Vegas strip) in third place. The Plaza in New York is fourth with 160,237 Instagram hashtags, followed by California’s Beverly Hills Hotel in fifth. Hawaii’s ocean-front accommodation, Halekulani, is the sixth most beautiful in the world.

Top 20 most beautiful five-star hotels in the world 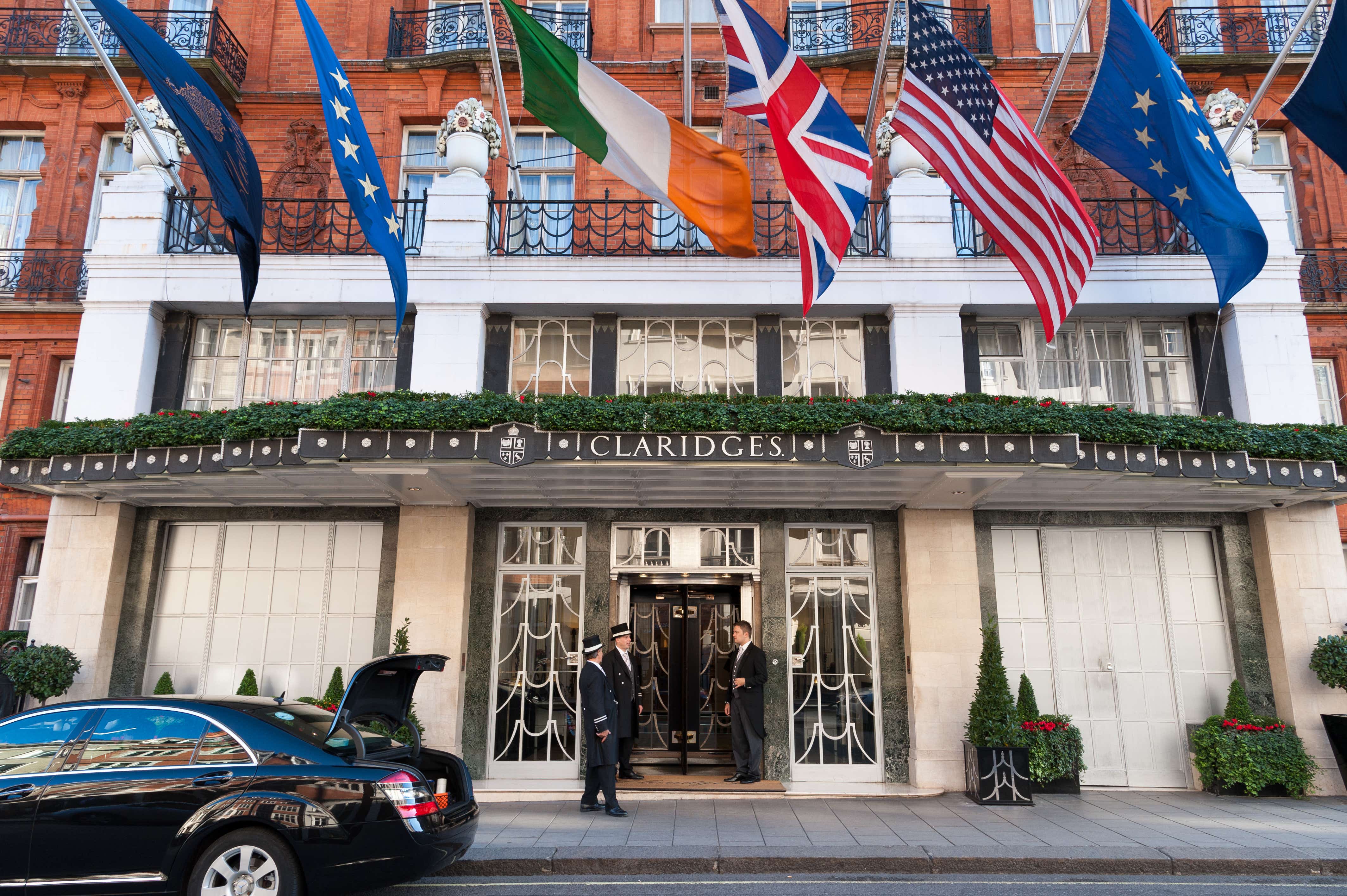 Looking at the five-star stays on offer in Europe, the analysis revealed that the UK is home to 11 of the top 20 most beautiful hotels on the continent. Best placed is Claridge’s in London, which is often described as an "annexe to Buckingham Palace" as it has a strong relationship with royal family members spanning back to the 1800s.

Next is The Ritz in Paris with 74,864 uses of their Instagram hashtag, which is a firm-favourite for royalty, heads of state and modern-day celebrities. Located in the prestigious region of Vendôme, it is within walking distance of jewellers and designer stores to make your stay even more luxurious. Third on the list is W Barcelona, which sits on the beachfront and offers guests fantastic views of the Spanish city.

Other British hotels to feature in the top 20 include Celtic Manor Resort in South Wales, which is a hotel that prides itself on celebrating its Celtic roots and has nearly 55,000 uses of the hashtag on Instagram. It is closely followed by two London venues; including The Dorchester (based in the iconic Mayfair area of the UK’s capital) with 44,454 hashtags on Instagram, and The Savoy is the seventh most beautiful five-star hotel in Europe with 41,787 hashtags.

Grosvenor House, also based in London, is just outside the top 10 list in 11th place, whilst Cliveden House in Buckinghamshire is the 13th most beautiful luxury hotel, and The Langham in London is 14th. Rounding off the top 20 are all London-based accommodations; The Ritz is 16th with 30,094 hashtags, the Ham Yard Hotel closely follows with 28,253 hashtags, The Connaught is 18th on the list, and Shangri-La at The Shard is 19th.

Top 20 most beautiful hotels in Europe 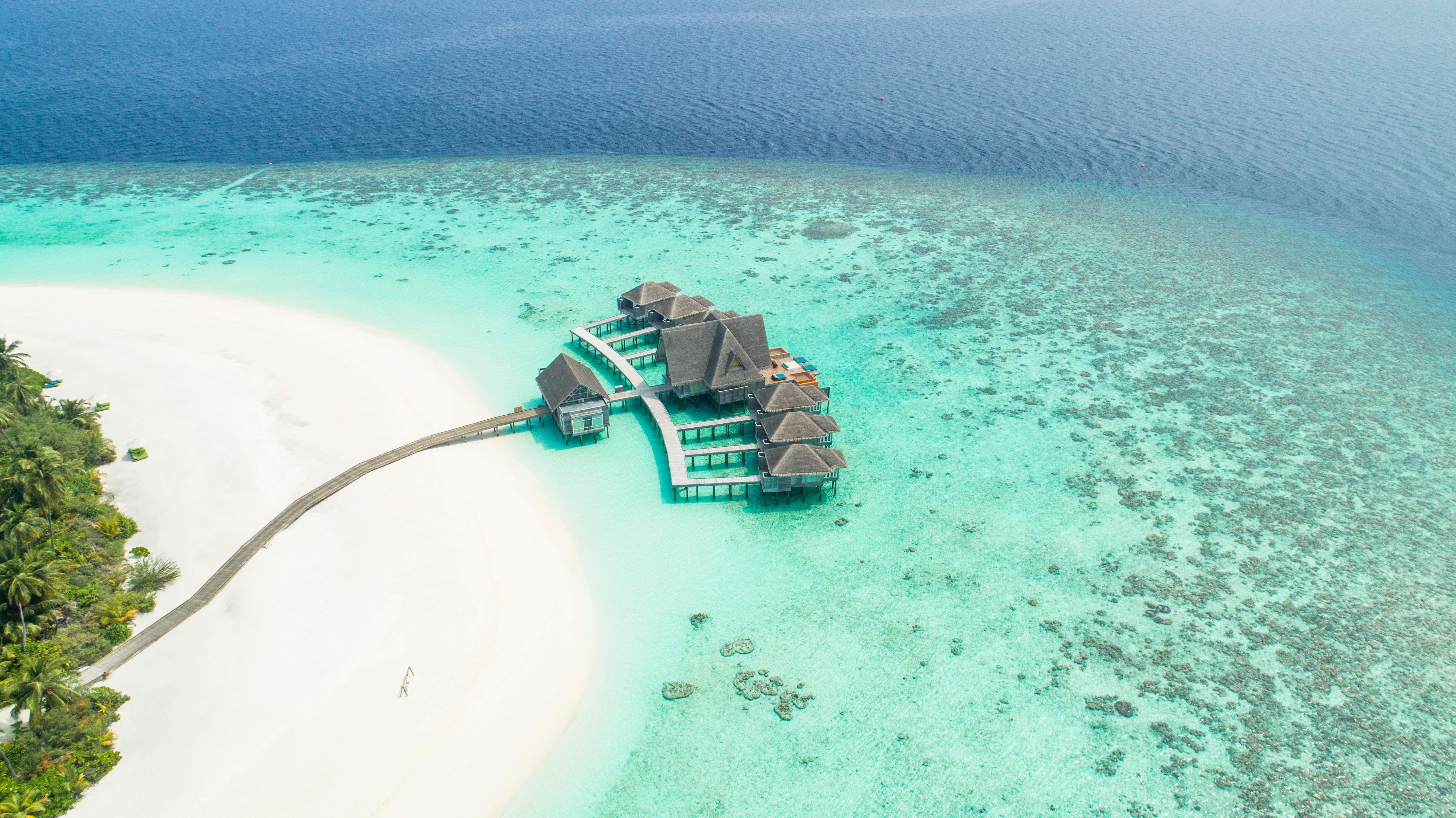 The Maldives claim the top two positions on the list of Asia’s most beautiful five-star hotels with Soneva Jani (the second-most beautiful hotel in the world) in first position and Niyama (the hotel with the world’s first underwater nightclub) in second with 69,595 Instagram hashtags.

Claiming the third and fourth positions are two Japanese hotels; Palace Hotel Tokyo  - famed for its incomparable views of the city and sitting directly opposite the Imperial Palace gardens - is third, whilst Mandarin Oriental Tokyo is next with 34,168 uses of the hotel’s hashtag on Instagram. Finishing off the top five list is Cocoon Maldives which can only be accessed by a 30-minute seaplane ride, to make it feel even more luxurious.

Top 20 most beautiful hotels in Asia 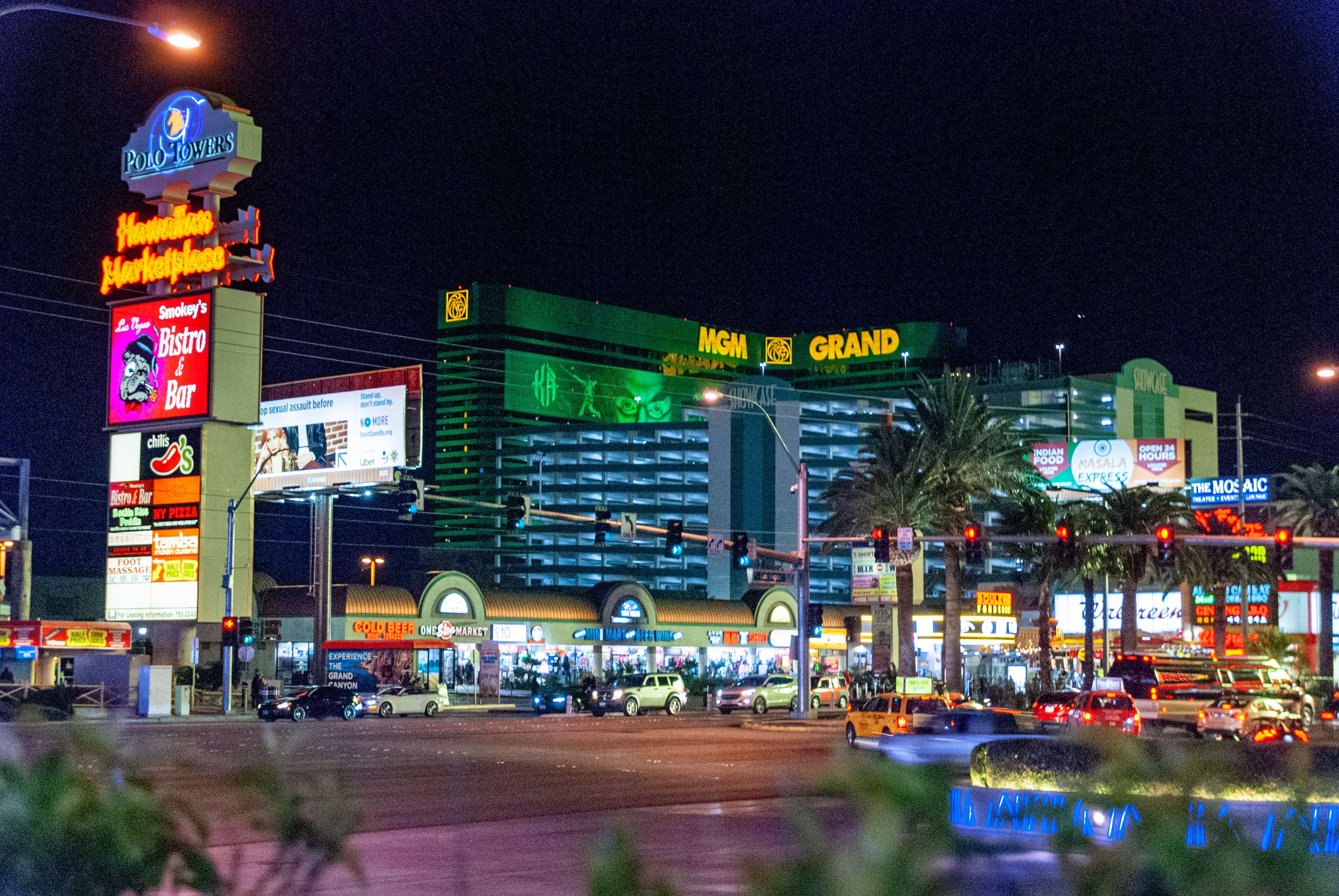 The top spot for North and Central America’s most beautiful five-star hotel is Las Vegas’ Bellagio with 161,088 hashtags. Inspired by European villages and with epic views of the Bellagio Fountain, it is considered one of the most iconic hotels in Nevada.

The Plaza in New York is second on the list with over 160,200 hashtags. Whilst ‘the Pink Palace’ (Beverly Hills Hotel) in third position; not only is it a popular choice for Hollywood films but also for Hollywood stars - Elizabeth Taylor and Richard Burton actually lived in one of the bungalows, which can be booked today for the small sum of $9,000 a night!

The fourth most beautiful five-star hotel is Halekulani in Hawaii. It has 93,179 hashtags on Instagram with guests snapping views of the stunning interiors and breathtaking luxury views of the Waikiki oceanfront. Completing the top five is the Dominican Republic’s Excellence El Carman with nearly 56,000 Instagram hashtags. 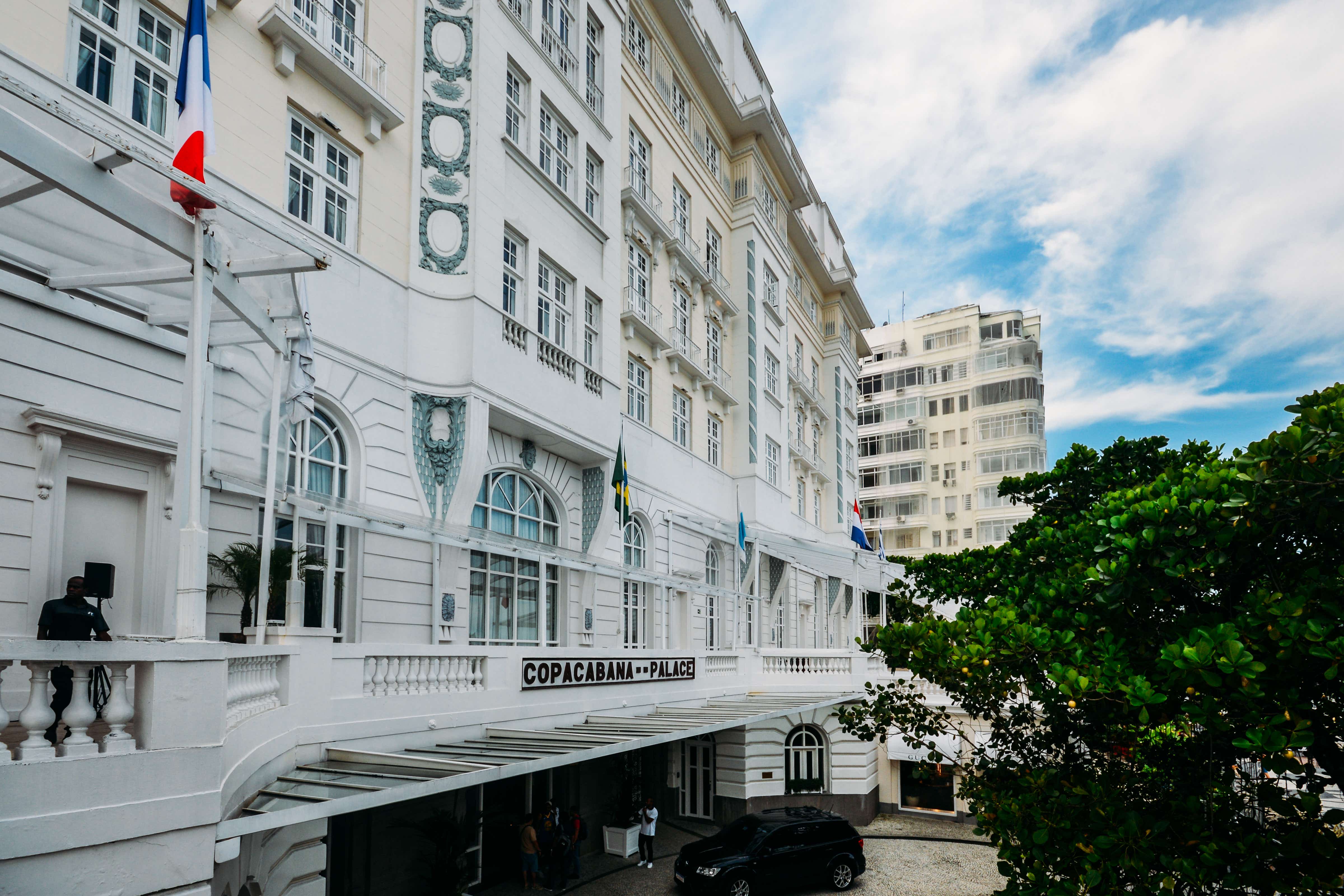 Looking at South America, half of the top 10 most beautiful five-star hotels are located in Brazil, including the top two; Palácio Tangará has 25,112 Instagram hashtags and Belmond Copacabana Palace has 22,330 hashtags. Taking the bronze prize is Palacio Duhau in Argentina, located in the traditional neighbourhood of Recoleta and set in a Neoclassical palace adorned with marble bathrooms and crystal chandeliers.

The other Brazilian hotels to feature in the top 10 are Belmond Hotel das Cataratas in seventh position, Ocean Palace Beach Resort (offering their guests incredible sea views of the South Atlantic Ocean) in eighth, and Villas de Trancoso in ninth with 4,122 hashtags.

The only Chile-based accommodation to feature on the list is W Santiago, claiming the fifth position with nearly 8,000 Instagram hashtags. 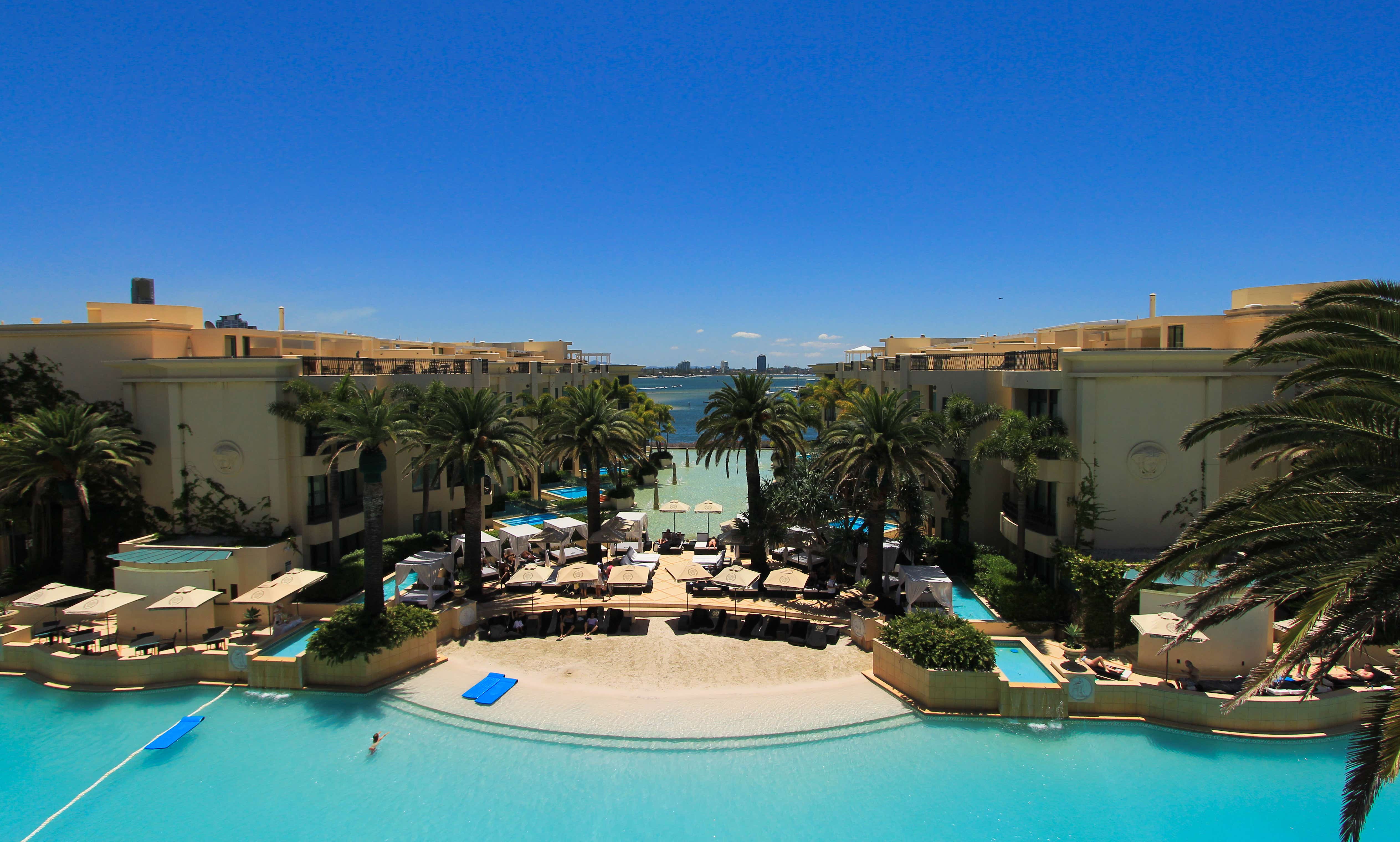 Palazzo Versace is the most beautiful five-star hotel in Oceania; most famous for housing the cast of UK TV show I’m A Celebrity, the hotel is based on the Gold Coast and is just 3km to the north of Surfers Paradise. Although its location is extremely appealing, it’s the interior of the hotel that is most impressive, as it is all gold everything.

Overlooking Darling Harbour in Pyrmont is The Star, which claims second place on the top 10 list with 23,511 Instagram hashtags, followed by the St. Regis Bora Bora which has accumulated 22,506 snapshots of its stunning tropical views.

Other Australian hotels to feature amongst the most beautiful include The Shangri-La Sydney, which boasts the perfect location in the historic Rocks district in the heart of the city, giving exceptional views of Sydney Harbour Bridge and the Sydney Opera House. Further down the list is Park Hyatt Sydney at seventh place with 11,839 hashtags, followed by QT Gold Coast in eighth place, whilst The Langham in Melbourne completes the top 10 list.

Top 10 most beautiful hotels In Oceania 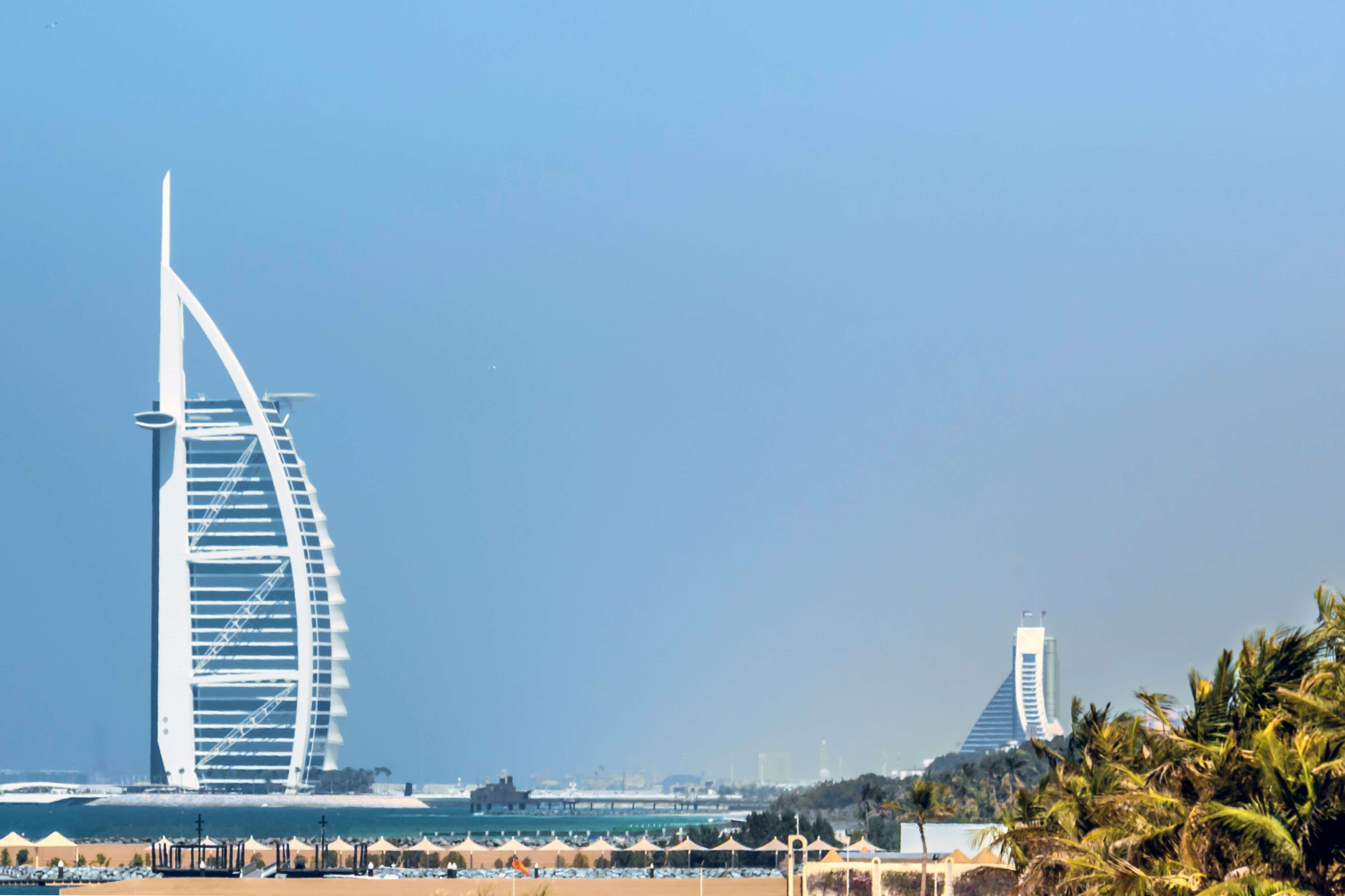 Burj Al Arab Jumeirah is not only the most beautiful hotel in the Middle East but also the world, with a huge 2,428,501 Instagram hashtags. Thanks to its unique shape and incredible opulence, you can see why so many tourists would want to share their visits on social media.

Palazzo Versace Dubai is second on the list, then Jumeirah Al Naseem with 28,487 Instagram hashtags, followed by Taj Dubai in fourth and Park Hyatt Dubai in fifth. The only hotels in the top 10 that are outside of Dubai are Abu Dhabi’s St. Regis Saadiyat Island Resort (which offers a stunning beachfront as well as a lush golf course) and Oman’s Al Bustan Palace in eighth and ninth place respectively. 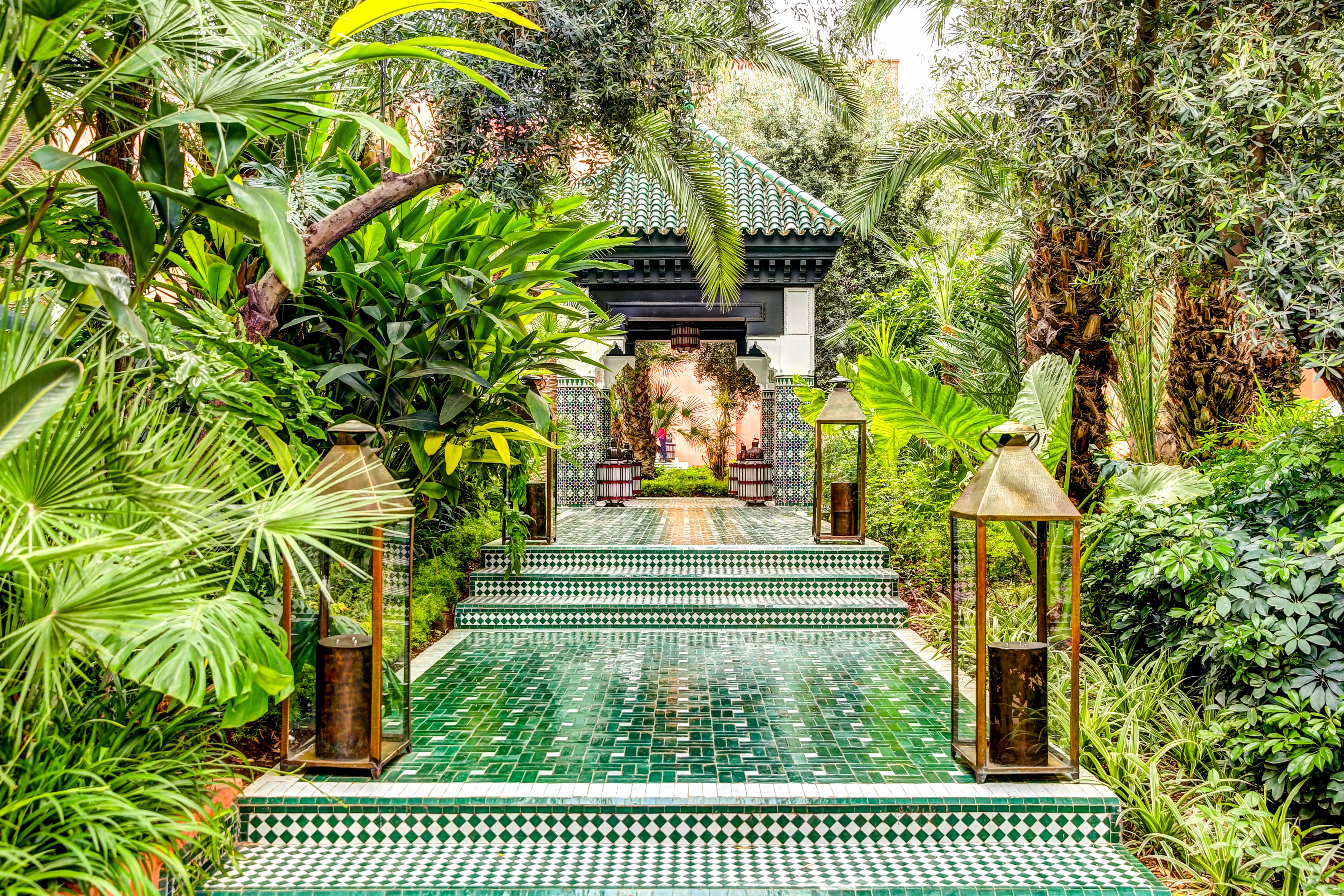 In Africa, it is La Mamounia in Marrakech, Morocco taking the top spot as the most beautiful hotel on its continent. It has 52,152 Instagram posts capturing the vibrant decor and extravagant finishing touches that celebrate everything about Marrakech.

Top 10 most beautiful hotels in Africa

So, if you’re thinking of booking your next trip, remember that you can use 0% purchase credit cards to make large purchases, meaning you can spread the repayments and reduce the amount of interest you pay. You’ll also be covered for any purchases between £100 and £30,000 by Section 75 of the Consumer Credit Act which will help give you peace of mind when checking into the five-star hotel of your choice.