They say that beauty is in the eye of the beholder, but what makes someone beautiful? Is it genetics, sheer luck, or are there other factors like birthplace that could play a part? Do some cities seem to produce more pageant winning people than others?
Share this guide 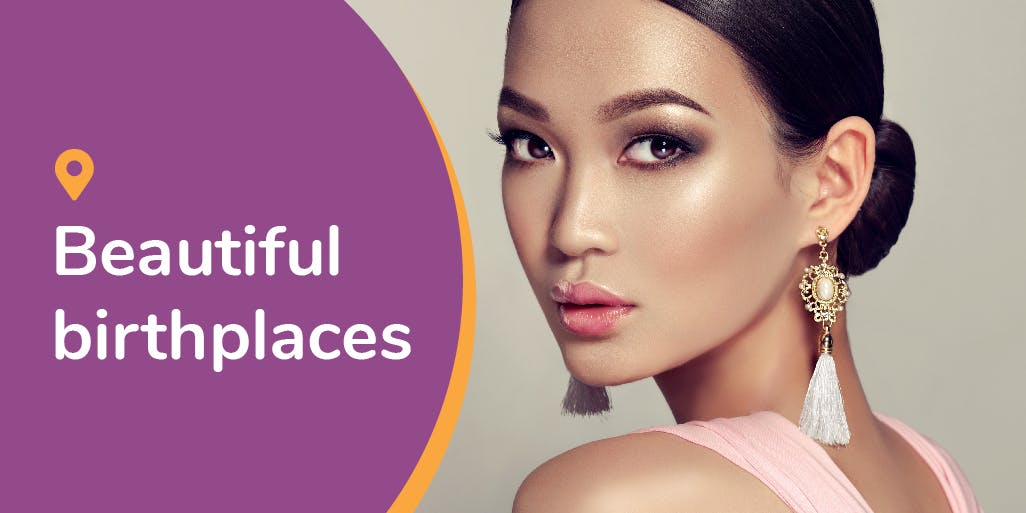 The mortgage experts at money.co.uk have delved into data to find out where the most ‘beautiful’ people in the world are born.

While beauty is ultimately subjective, we’ve chosen to study the cities and countries that have produced the most winners of beauty pageants.

So are there some cities where you are more likely to find more pageant winning residents than neighbouring cities?

The most beautiful countries in the world

Looking at over 500 pageant winners, money.co.uk compared their birthplaces to find out if some countries appeared on our list more than others. 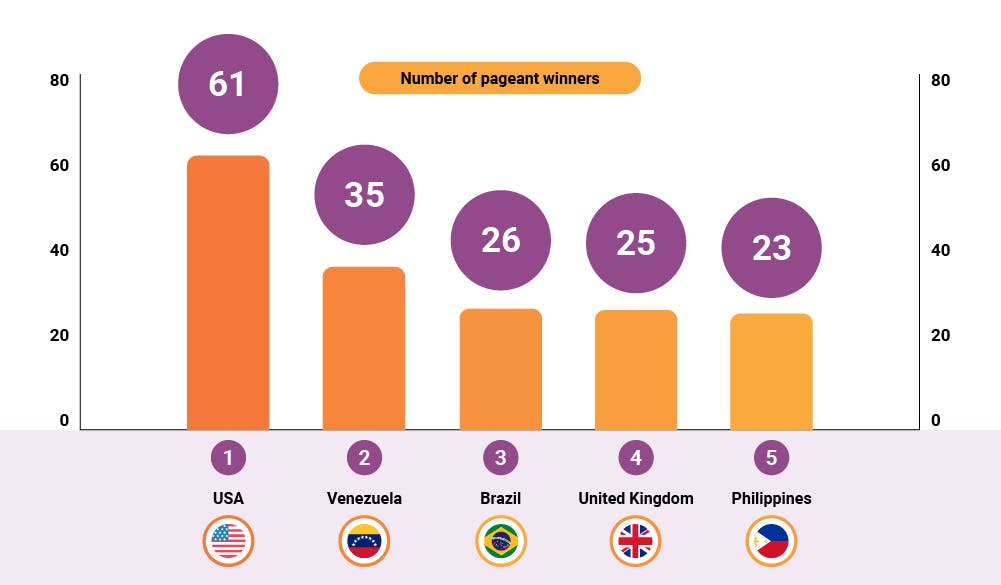 It is perhaps no surprise that the USA tops the list as the home of Hollywood and beauty pageants. However, Venezuela takes second, with 35, followed by Brazil (26), the UK (19) and the Philippines (23).

The most beautiful cities in the world

Next, money.co.uk looked at the individual cities that have produced the highest quota of winners, and while the USA may have taken the crown when it comes to nations, the most beautiful city in the world wasn’t found stateside. 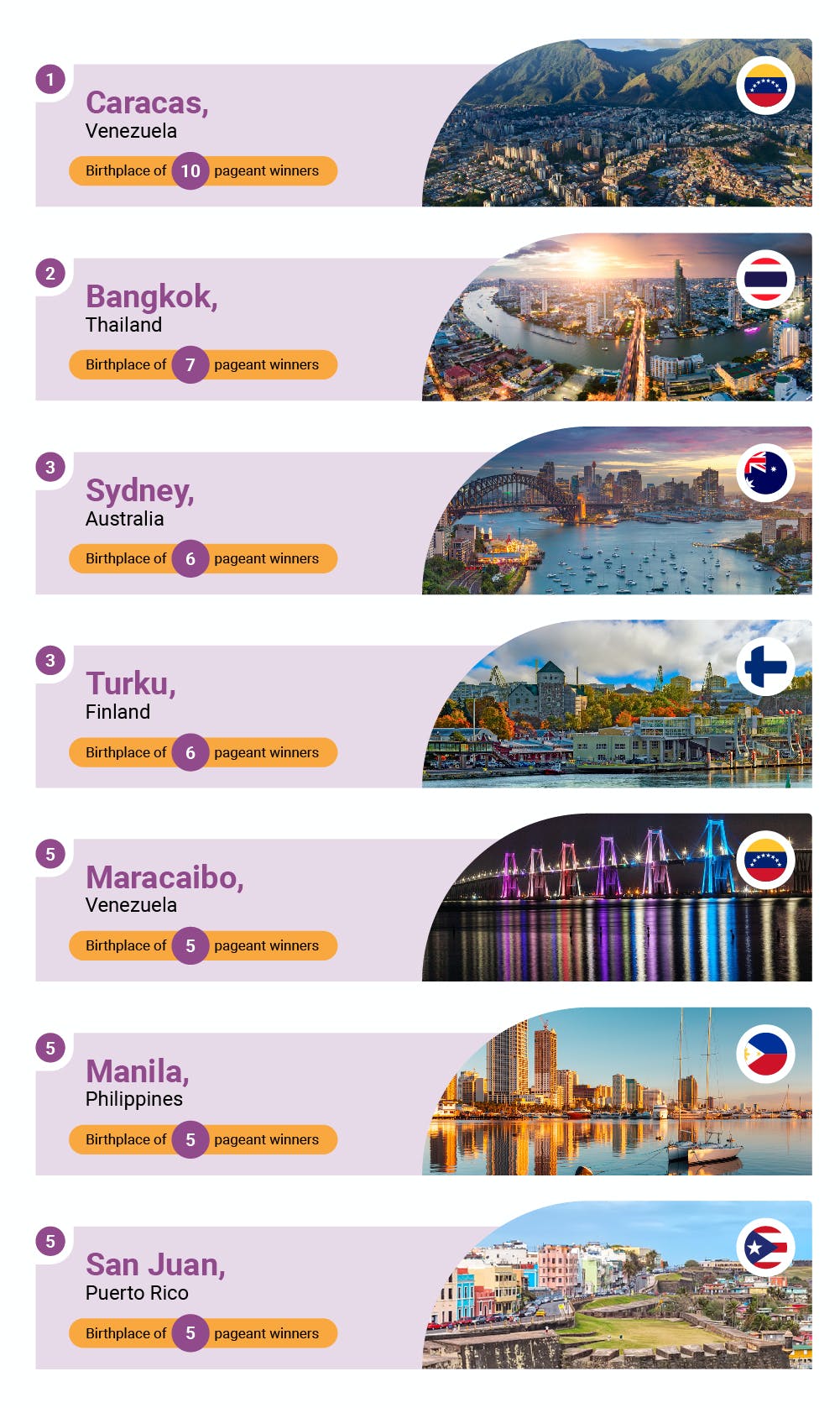 Caracas in Venezuela is in first place, with Venezuela known for taking beauty pageants seriously, having won more “Big Four'' titles than any other nation. Some of the most famous beauties to come out of Caracas are Dayana Mendoza and Claudia Moreno.

In second place was Bangkok, the capital of Thailand, which has produced seven pageant winners. Interestingly, four of these were winners in LGBT+ pageants.

Two cities were tied for third place, with six beauty pageant winners hailing from Sydney, Australia. Perhaps the most famous of these is Jessica Kahawaty, who has represented both her native Australia and the country of her descent, Lebanon.

The other city to produce six pageant winners was something of a surprise, with the city of Turku in Finland tied for second place. The city is home to just under 200,000 people but has produced an exceptionally high number of beauty queens given its small size.

Another Venezuela city is amongst those to have produced five pageant winners, again showing the country’s affinity with pageants. Maracaibo is the home of the likes of Jessica Barboza and Daniela Kosán.

The Philippines are considered another powerhouse of the beauty pageant world, which explains why the capital of Manila has produced the joint fifth-highest number of winners.

The Puerto Rican capital of San Juan is also home to five beauty pageant winners, with Stephanie Del Valle, who won Miss World in 2016, probably the best known of these.

The most beautiful states in the USA

With the USA being revealed as the most beautiful country, we also decided to take a deeper look into the specific states that have produced the most beauty queens and kings. 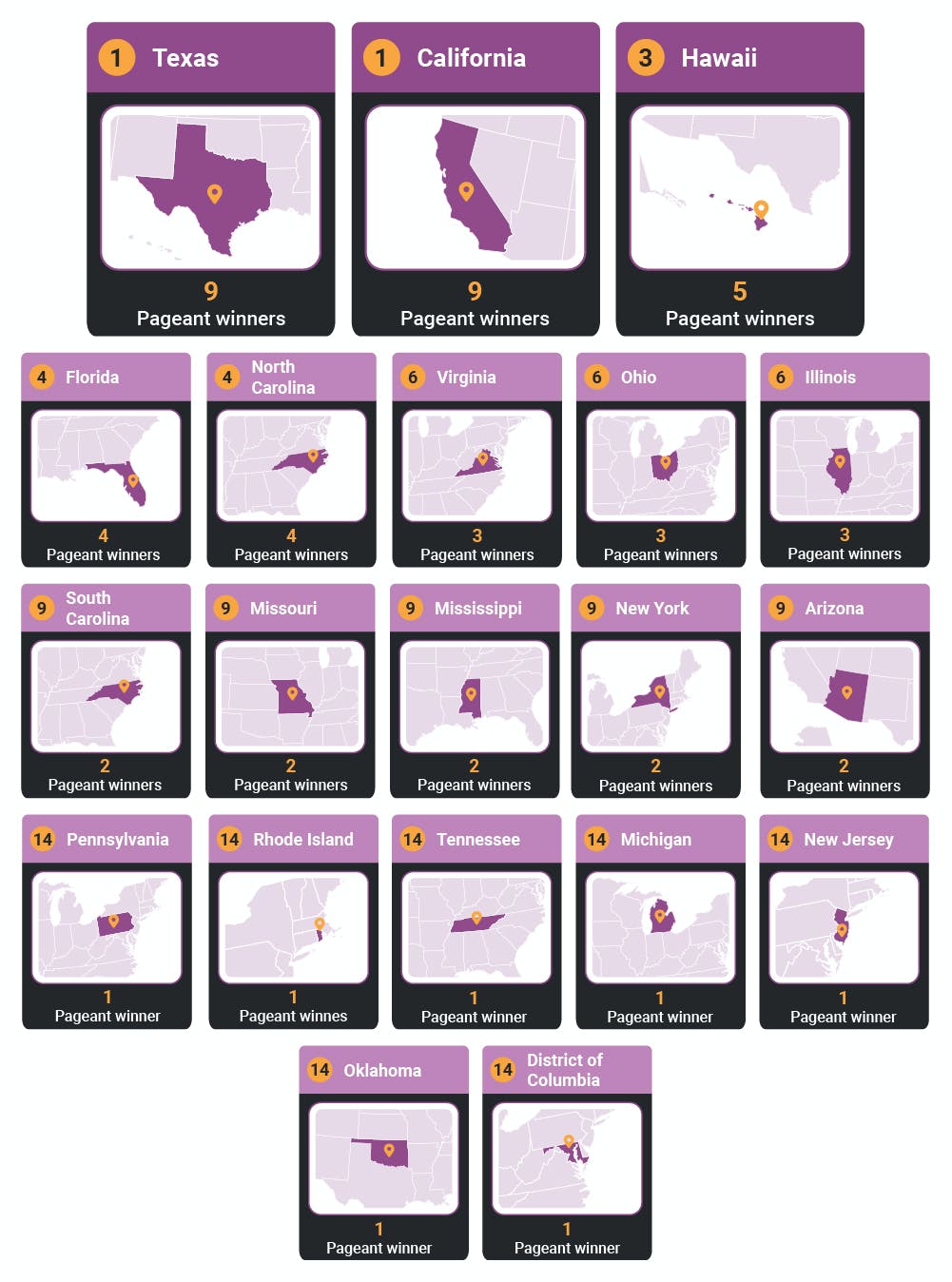 The result was a tie between Texas and California with nine each, although Texas had a larger share of winners, compared to runner ups.

Beauties from the Lone Star State include Alyssa Edwards (who appeared on RuPaul’s Drag Race) and Paola Turbay.

The most common birthplaces of LGBTQ+ pageant winners

The pageant world has become much more inclusive in recent years, with a number of global LGBTQ+ pageants taking place, including Miss International Queen and Mister Gay World, but which are the countries that dominate in these events? 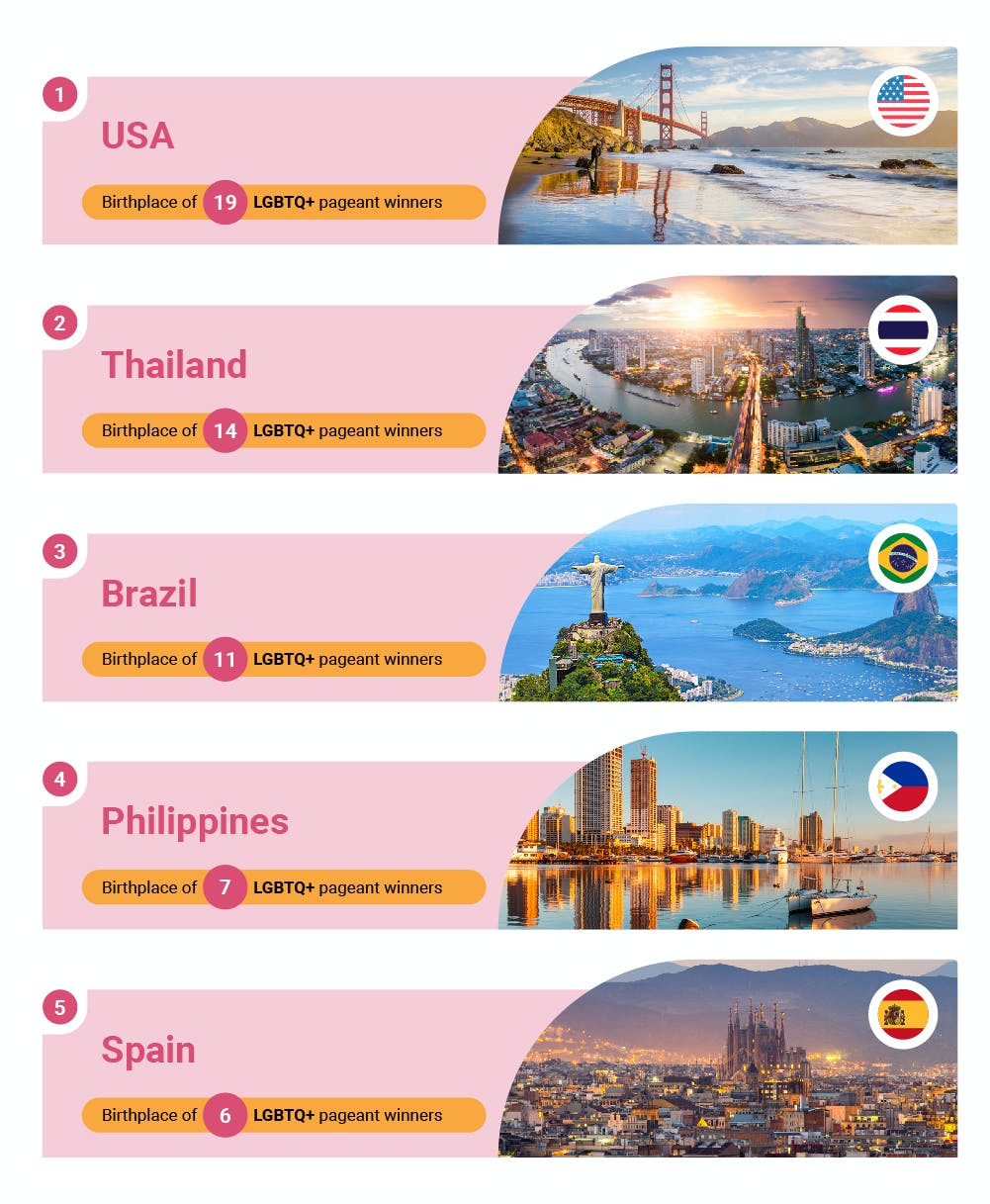 As was the case with straight pageants, the USA was the country that produced the most LGBTQ+ pageant winners, including winners of Miss International Queen and International Mr Gay.

Thailand came in second, with 14 LGBTQ+ pageant winners, and was also home to the city that produced the most beauty queens and kings, Bangkok.

Birthplaces of the most popular beauty pageant winners

Winning a beauty pageant can catapult some into the limelight, giving them a new level of popularity that they wouldn’t have achieved without their crown. So, which beauty kings and queens are the most popular on Instagram? 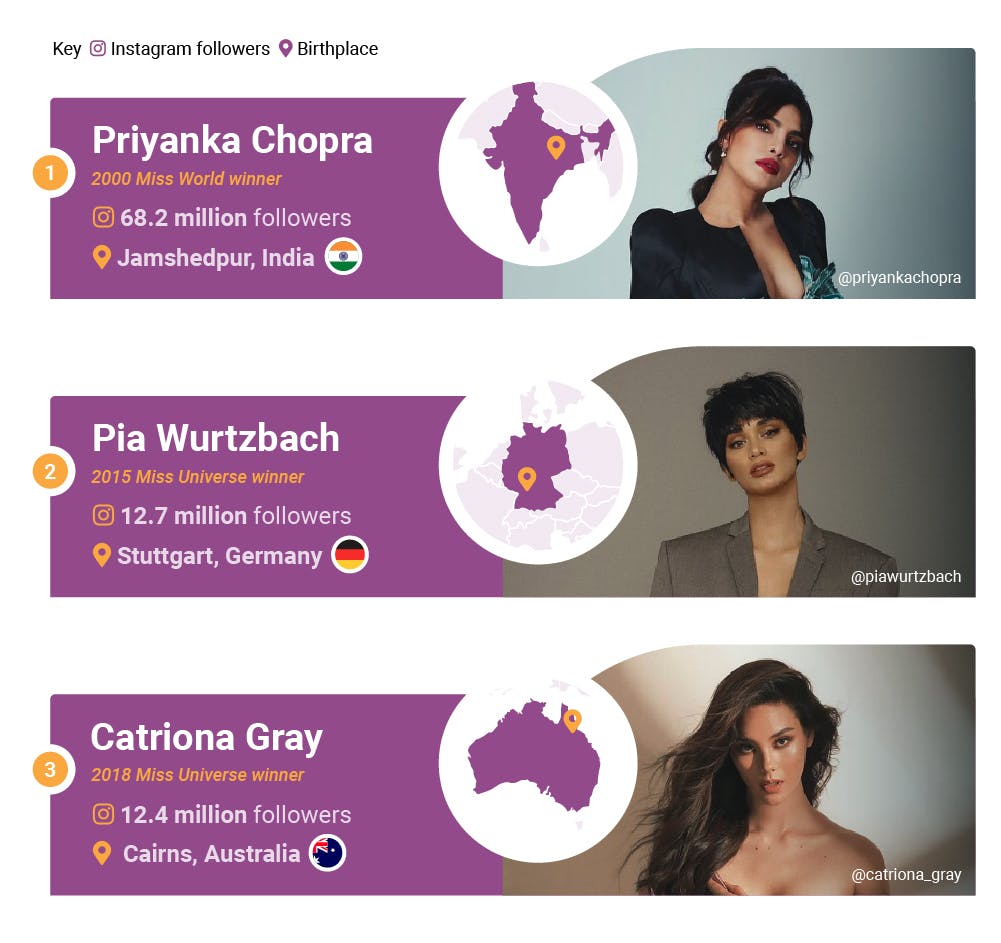 Affording your own beautiful home

Whether the city you wish to live in is home to some of the most beautiful people or not, you can still find your own beautiful home city when you move home with affordable mortgage deals.

Money.co.uk compiled a list of some of the most beautiful people in the world including winners of international beauty pageants and models, taken from the following sources:

Taking the birthplaces of each of these people, money.co.uk were able to discover the most common birth cities of the most beautiful people.

All social media follower data is correct as of 14th September 2021.