Revealed: the most in-demand University degrees

Deciding whether to undertake a higher education qualification is a large financial and life decision made by many every year. But how has the coronavirus pandemic affected degree demand? And how do job prospects differ by degree discipline?
Share this guide

Working in collaboration with the recruitment experts at Check-a-Salary, money.co.uk analysed over 1 million job adverts* to reveal how higher-education qualifications could affect your job prospects.

Before choosing your university, compare the best savings accounts to ensure you start off your educational journey on the right financial foot.

The UK’s most in-demand degrees

Choosing a degree subject to study at university can be one of the most difficult and important educational decisions. With tuition fees in England costing up to £9,250 per year, many students will often see their degree as both a qualification and an investment in their future job prospects.

By analysing job adverts from both 2020 and 2019, the personal finance experts at money.co.uk can reveal which degrees are the most in-demand by employers and how the coronavirus pandemic has affected the number of job vacancies.

With almost 77,000 job vacancies listing an ‘engineering degree’ in the job specification in 2020, engineering graduates will be pleased to hear their degree is the most in demand in the UK.

The UK’s second most requested degree is Business. With almost 40,000 job adverts requesting the higher education qualification in 2020, job hunters with this qualification can expect to find a high number of roles looking for their skill set.

The third most requested degree in 2020 was Management, with over 32,500 roles requesting the higher education qualification.

Other highly sought-after degrees in the past year were Design and Marketing, with both of these degrees being requested in over 15,000 job adverts.

Sixteen out of the 25 most in-demand degrees in 2020 were for science, technology, engineering, and mathematics (STEM) subjects. With significant increases in demand for qualifications in computer engineering and computer science, these may be subject areas worth considering if you’re weighing up your options for university.

Danny Aldridge, Co-Founder of Check-a-Salary commented on the findings:

"The increase in demand for IT and Mathematical related degrees emphasises the importance of the sector to the UK.

"The varying levels of pay depending on degree highlights to school leavers the significance they need to place on their degree choice.

"Studying a STEM subject is likely to lead to higher levels of pay throughout a career."

How has the coronavirus pandemic affected the most in-demand degrees?

The coronavirus pandemic has undoubtedly had a devastating effect on many businesses and this in turn has had a knock-on effect on the job market.

Despite engineering degrees being the most requested in 2020, the number of job vacancies requesting the specific qualification decreased 25% on 2019’s numbers.

Mathematics degrees, which were the 25th most requested in 2020, saw a significant 61% decrease on the number of roles requesting the same qualification in 2019.

The data also shows a 57% drop in demand for Nursing degrees in 2020 in comparison to the previous year. Despite the drop in job roles requesting the specific degree, it’s clear that Nursing qualifications are still a top priority for the UK. In August last year, the Department of Health and Social Care announced £172m in funding for thousands more apprentice nurses in England.

It’s not all bad news though, as despite the impact the pandemic has had on the job market, some degrees still continued to increase in demand year-on-year.

Which degrees have seen the largest increase in demand?

The way we live and work has dramatically changed in the past year, and therefore it’s to be expected that the types of jobs and skills sets required have shifted too. Below is a list of the 10 degrees which have seen the biggest increase in demand between 2019 and 2020. 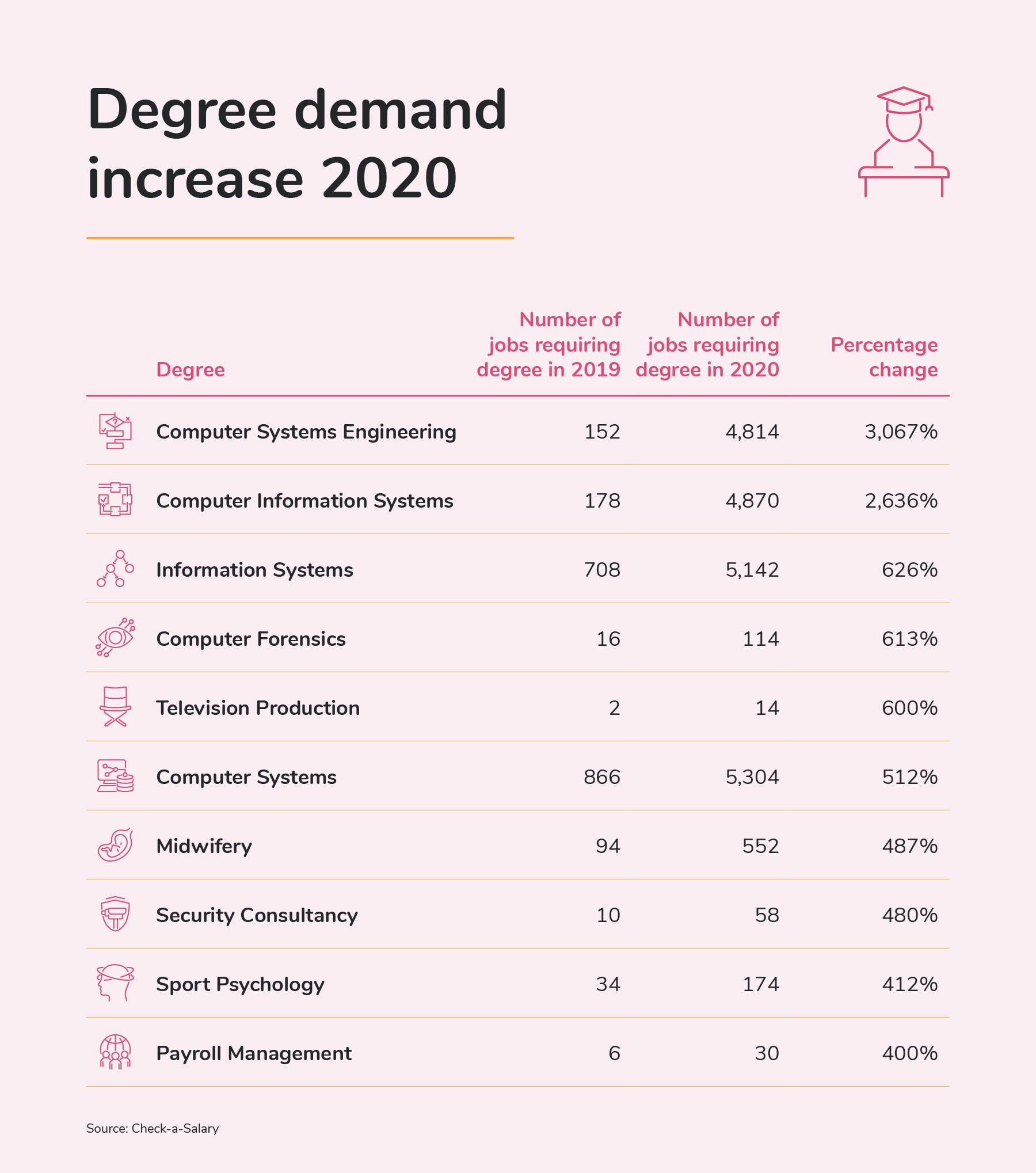 Degrees specialising in Computer Systems Engineering and Computer Information Systems have seen the biggest increase in demand since 2019.

Other security specific degrees such as Computer Forensics, Security Consultancy and Intelligence Analysis have also seen a surge in demand during the past 12 months.

Demand for qualified midwives increased significantly in 2020. In 2019, only 94 roles were recorded to specifically require a midwifery degree, but in 2020 this increased by 487% to 552.

Which degrees have seen the largest decrease in demand? 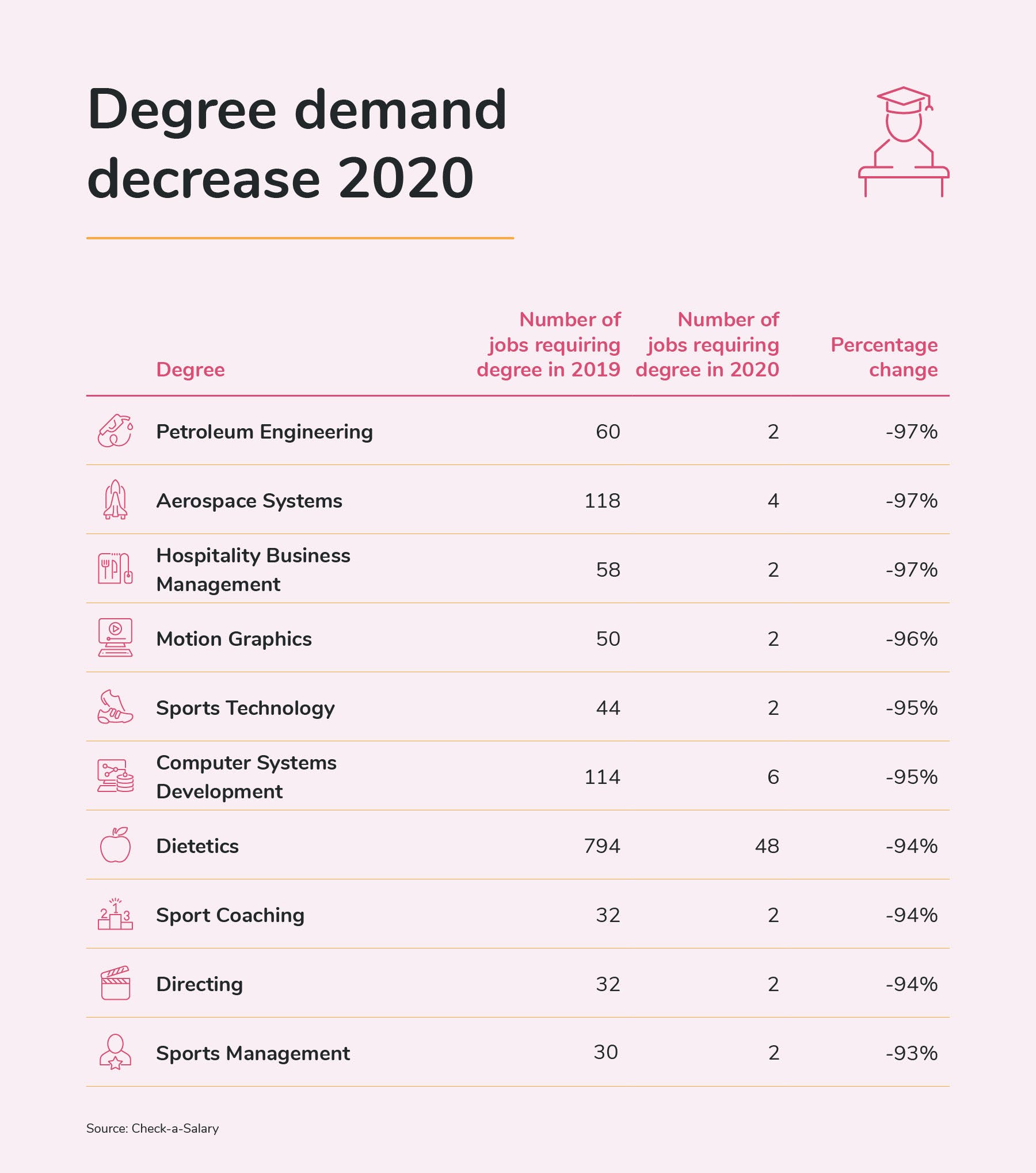 In comparison to 2019, demand for Petroleum Engineering and Aerospace Systems degrees fell by 97%.

Perhaps unsurprisingly due to the restrictions on travel and social mixing in 2020, demand for Hospitality Business Management degrees fell by 97%.

Salaries for the most in-demand degrees

For many undertaking higher education qualifications, there is some expectation that a higher level of expertise will lead to larger salaries in the future. We analysed 2020 salary data provided by Check-a-Salary to reveal what the median salaries individuals could expect to earn with some of the UK’s most in-demand degrees. 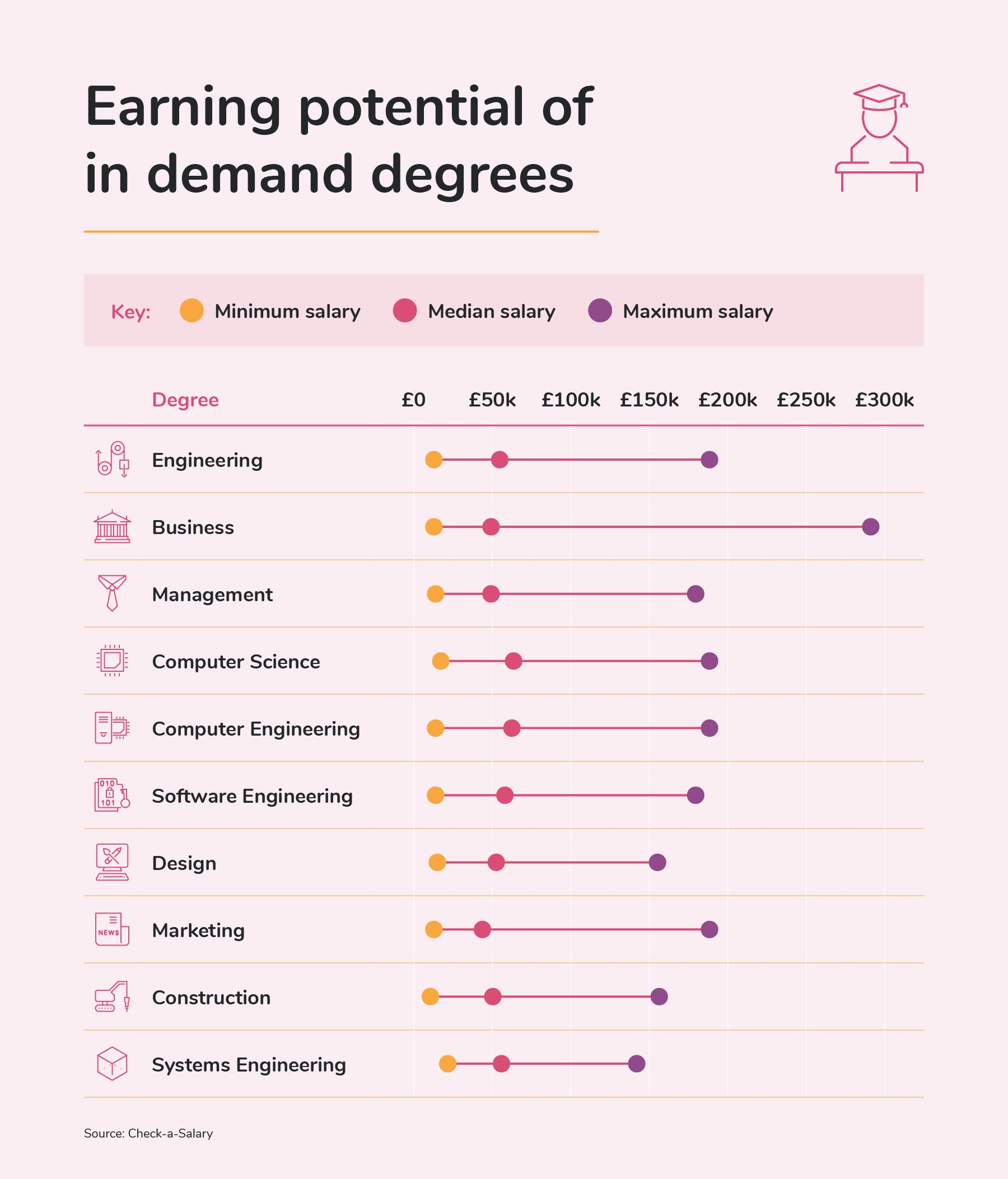 Although only the UK’s 4th most requested degree on job adverts, jobs requiring a Computer Science degree offer a median salary of almost £63,000 per annum.

Computer Engineering and Software Engineering degree holders could also expect to be earning well above the UK average of £31,200 - as the median yearly salaries for roles requiring these degrees top £62,500 and £57,500 respectively.

Of the top 10 most in-demand degrees, only 3 of these were not in STEM subjects - Business, Management and Marketing. Interestingly, roles requiring these degrees also had the lowest median salary offerings amongst the top 10.

Job satisfaction, career progression and salary are often key considerations when applying for a role. But how many job adverts requiring a higher education qualification list the salary?

For all jobs requiring a degree in 2020, we found only 17% of these listed the salaries. In the same time frame, the UK searched for definitions around “competitive salary” almost 32,600 times**, suggesting many are unsure what they could expect to be paid when applying for roles without salaries.

Amongst the top 25 in-demand degrees, we found that only 9% of roles requiring a finance degree, and 10% requiring an accounting degree listed the salary within the job specification.

If you're thinking of going to university in the future, you may want to consider putting some money aside to cover unexpected living costs. You can compare our best savings accounts and our other student guides here.

We used this data to understand year-on-year changes in demand and salaries. Where salary data was not given in the job description, this returned a null result. We used this information to calculate the percentage of jobs which list the salary.

For year-on-year increases and decreases we only analysed degrees that were listed in job adverts in both 2019 and 2020.

Before collecting our results, we merged degree names which were plurals or were similar phrasings to one another (e.g. midwifery and midwifery studies) together.