The Covid-19 Debt Index - How you can get support

If the impact of the COVID-19 pandemic has forced you into debt, here’s how you can get the help you need to get your finances back in shape.
Share this guide 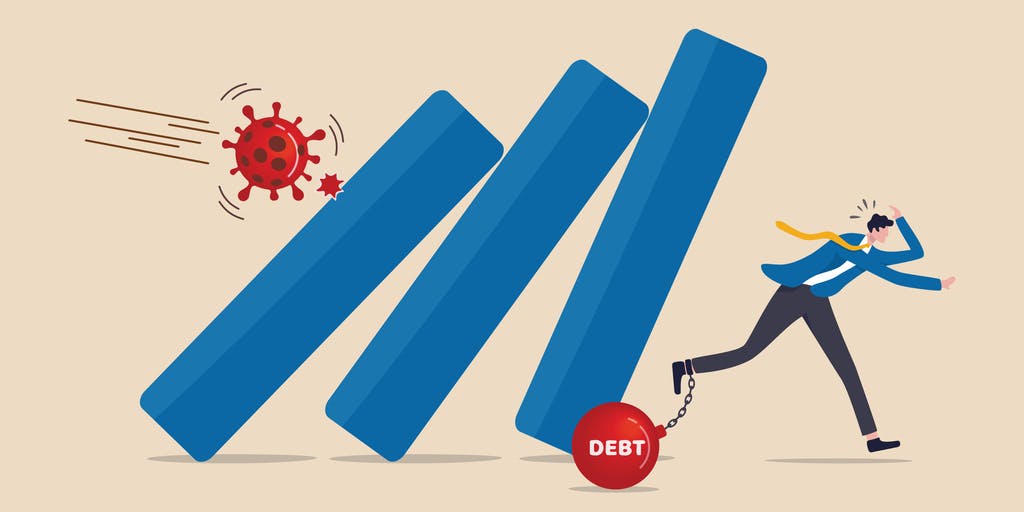 Across the country people’s household finances have been suffering under the strain caused by COVID-19 and the restrictions brought in to tackle its spread.

Money.co.uk has carried out extensive research into the impact of the pandemic on household debt across the regions last year.

We’ve also put together some handy tips to help you get back on your feet if the COVID-19 forced you into debt in the last year.

Some banks offer rewards, such as cash when you switch. Compare the latest offers on our current accounts page.

COVID-19 debt: What we found 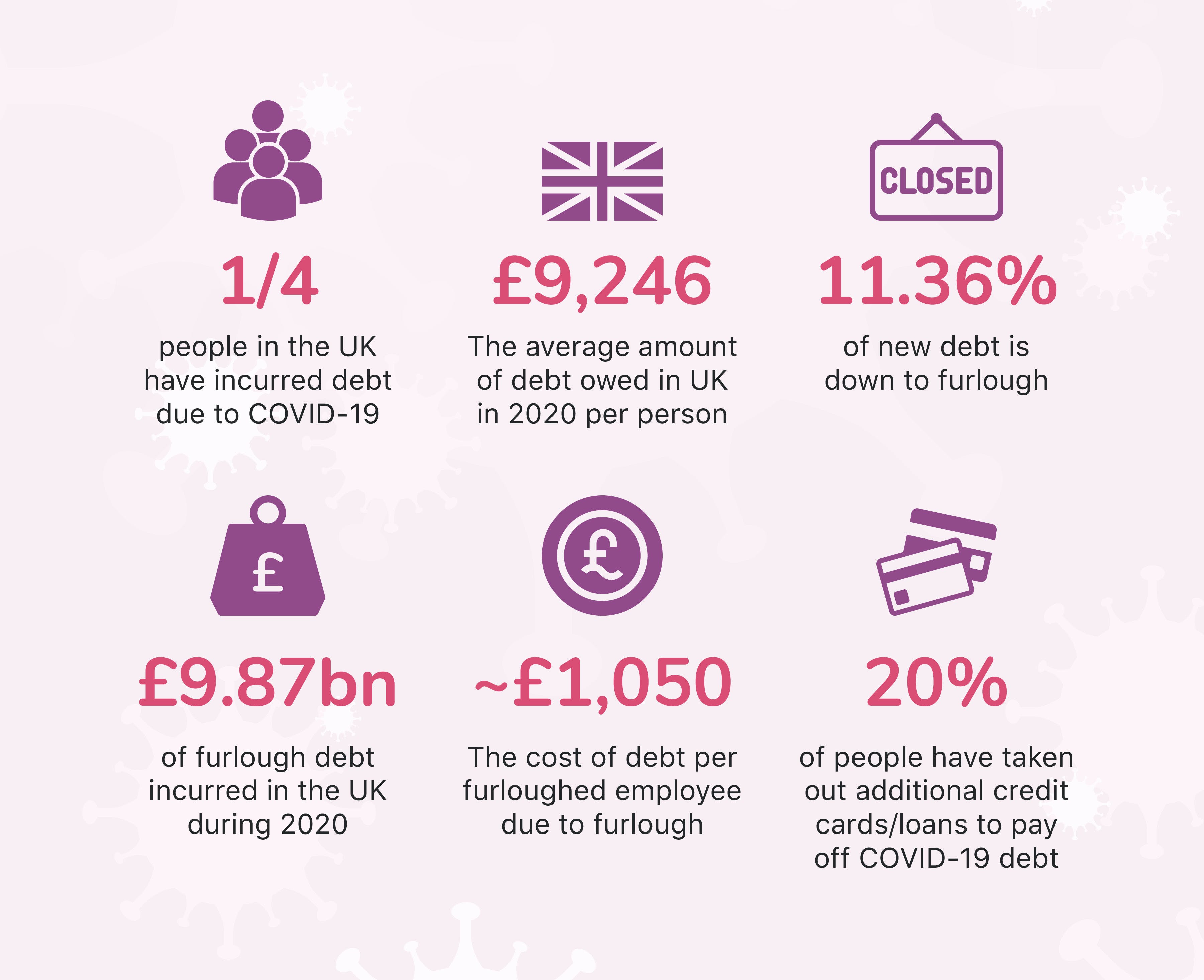 Just over half (51%) of the people we surveyed admitted to being in debt right now, with the average amount of debt owed in the UK in 2020 coming in at £9,246 per person.

Over a third (36%) of the debt accrued this year in London has been blamed on the COVID-19 pandemic.

While the government’s Coronavirus Job Retention Scheme (CJRS) has been a vital lifeline to millions of people unable to work, many of those who received furlough payments have been unable to keep up with their costs.

According to our research, 11.36% of new debt incurred in 2020 as a consequence of furlough payments not covering a recipient’s household costs.

Figures from the data company Statista suggest that 9.4 million UK jobs were furloughed during 2020. If this is correct, then the cost of debt due to the CJRS is roughly £1,050 per furloughed employee.

Taken together, that’s almost £10 billion of personal debt directly caused by workers struggling with reduced income due to furlough.

Separately, one in five people (20%) we spoke to said that they have taken out additional credit cards or loans to help them pay off COVID-related debt.

These figures help bring to life just how much of an effect the pandemic has had on people’s household finances across the country as a whole.

We’ve also found key differences in the levels of debt incurred across the country as a result of COVID-19. 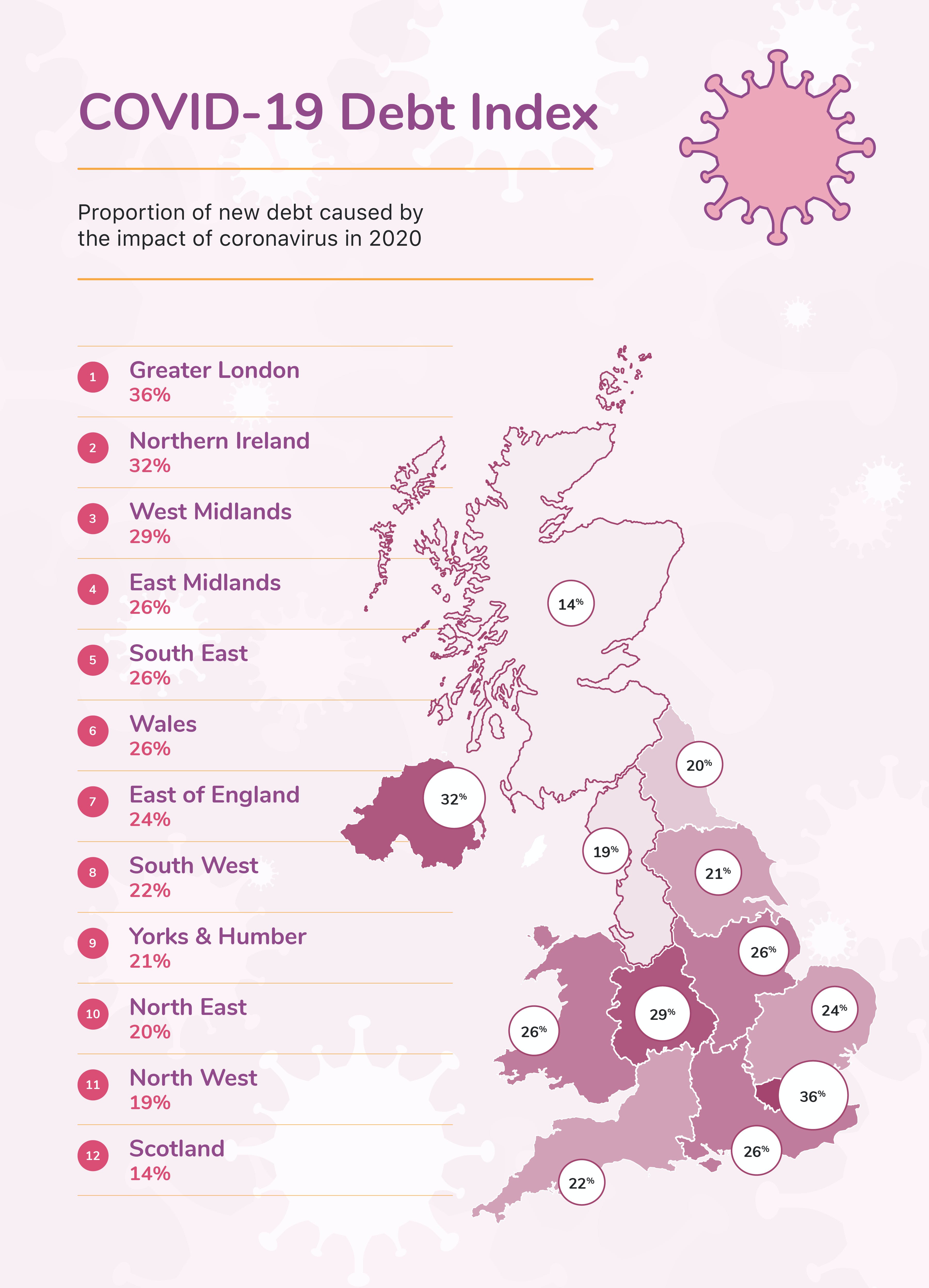 The story for workers who have been furloughed has been most bleak in the East of England, where 16.13% of all new debt is down to people having a reduced salary because of furlough, according to the data.

Greater London is not far behind, with 16.11% of all new debt in the region coming as a result of furlough.

In the North West 12.7% of all 2020 debt was attributed to workers being furloughed, while in the South East 11.98% of all debt accrued this year is down to loss of salary for those who have been furloughed. 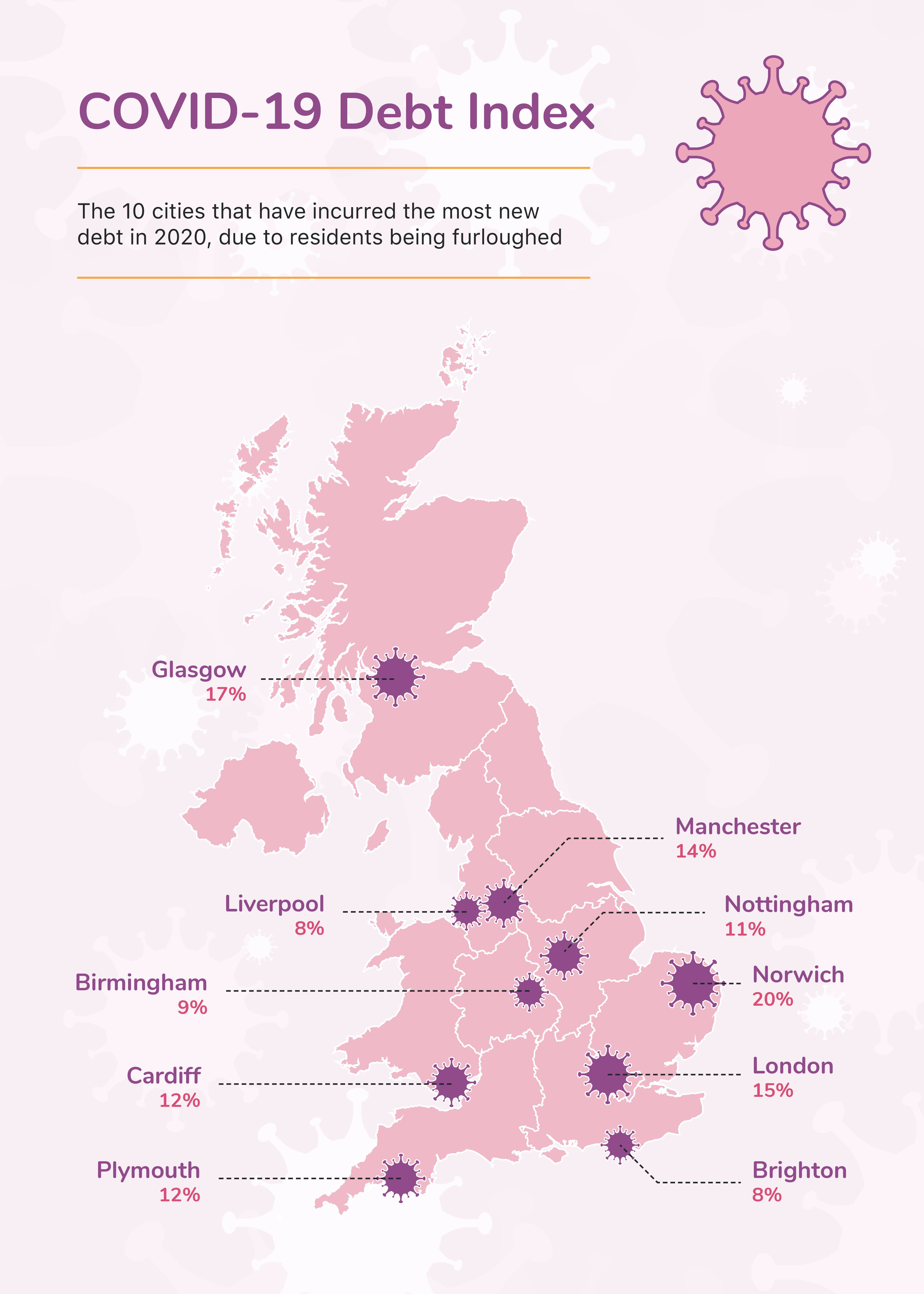 Norwich is the city most affected by the furlough scheme in terms of its debt.

Some 20% of all debt accrued in the city last year was blamed on workers being furloughed, according to our research.

London is next, with 15.38% of its debt being blamed on the effects of furlough, closely followed by Manchester, where 14.15% of its 2020 debt was caused by workers on furlough receiving a reduced salary.

More than a third (36%) of the debt accrued last year in London was been blamed on the pandemic more generally. The West Midlands has seen 29% of debt caused by COVID and, in the East Midlands, the South West and Wales, 26% of all last year's debt was blamed on the pandemic.

Research from money.co.uk discovered that almost eight in 10 UK adults carried debt into 2021.

Money.co.uk discovered that just 22% of the nation had not carried debt into 2021, and 2% fewer people carried over debt into the new year than last year.

That means, mortgages aside, 78% went the new year with some form of personal debt - including money owed on credit cards, personal loans, car loans, bank overdrafts and payday loans.

The "New Year Old Debt" study also showed that one in four people are paying off the minimum amount in repayments but less than the full amount on their credit card every month, which will be costing them

What were the causes of personal debt in 2020? 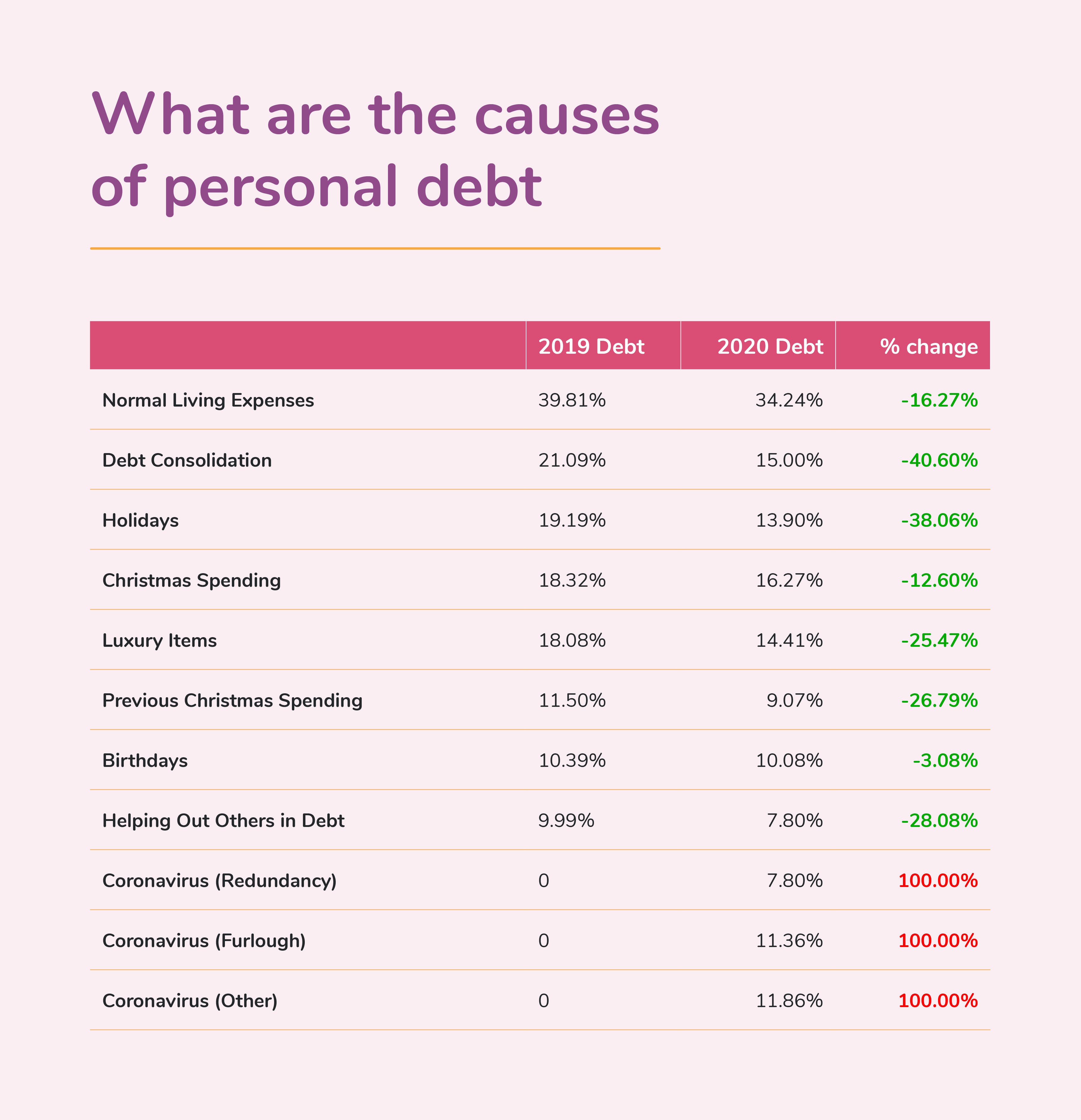 While the average amount owed has reduced compared to the previous year, the most common reason for 2020 debt was worryingly, ‘normal living expenses’, according to the research.

The study reveals that 35% of people’s personal debt is largely due to ‘normal’ living expenses, showing that the cost of living just isn’t covered by their regular income.

A further 15% say their debt is due to Christmas spending and 31% have identified that their personal debt is due to changed financial circumstances caused by the COVID-19 pandemic. 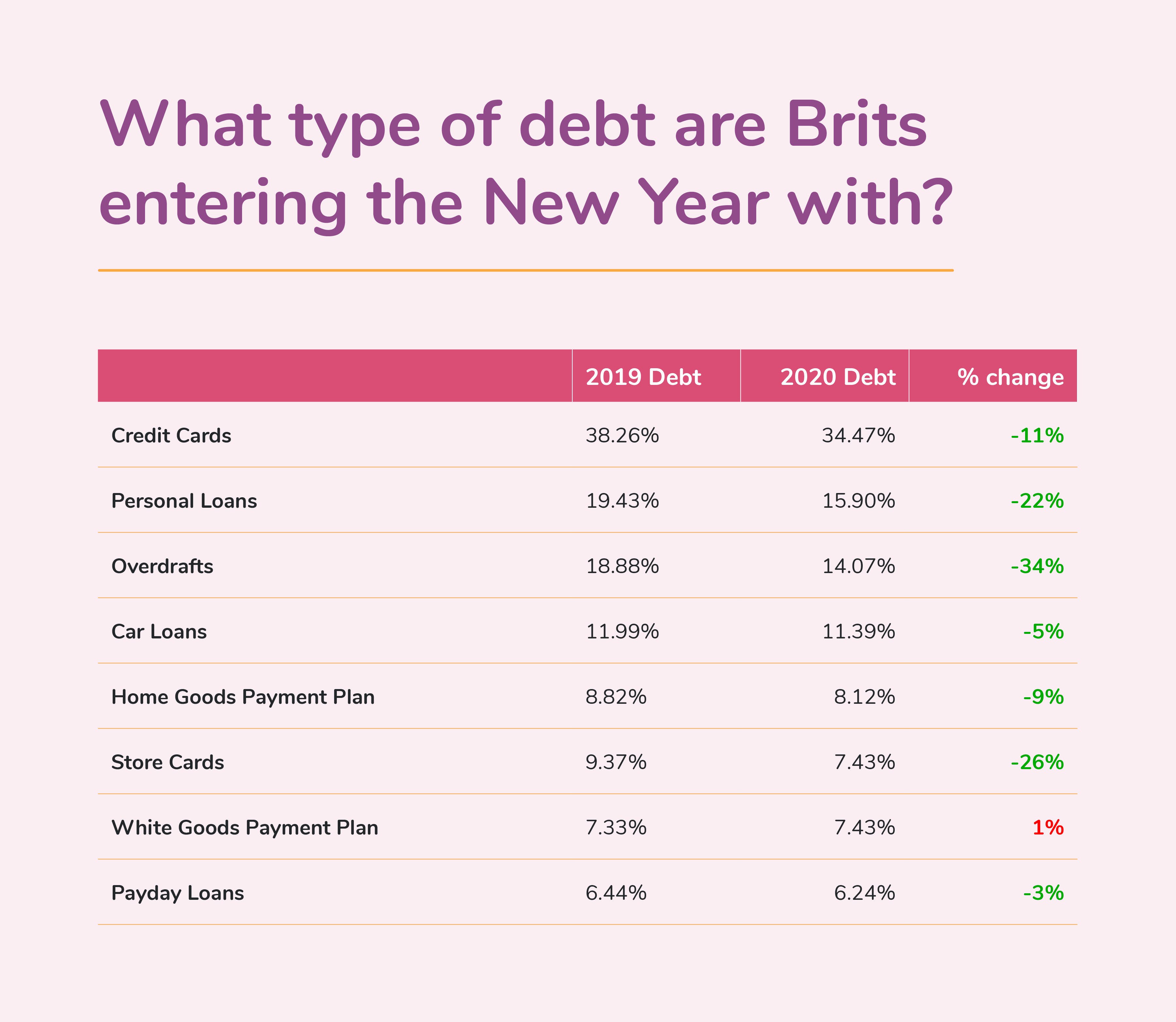 Geographically, people living in Northern Ireland had the most credit card debt (£8,323) whilst those in the south-west have the least (£1,473).

But UK adults actually reduced the amount of debt on their credit card by an average of £500 compared to the previous year, according to the research.

Some 15% of people say they have personal loans (down over 3% from 2019), 14% have overdraft debt (down 4% from the previous year), just over 11% have car loans and just over 15% have payment plan loans for home goods or white goods. A further 7% have store cards and 6% have payday loans to repay.

The money.co.uk research also shows that for 21% of people their debt repayments account for 11-20% of their salary.

In terms of repaying, the average time needed to pay off debts is almost three years (2.9). However, 27% of people said it will take between one and two years to pay off their debt, and 15% said they can pay it off in less than a year. Those in Wales will take the longest to repay their debut - an average of 3.3 years. 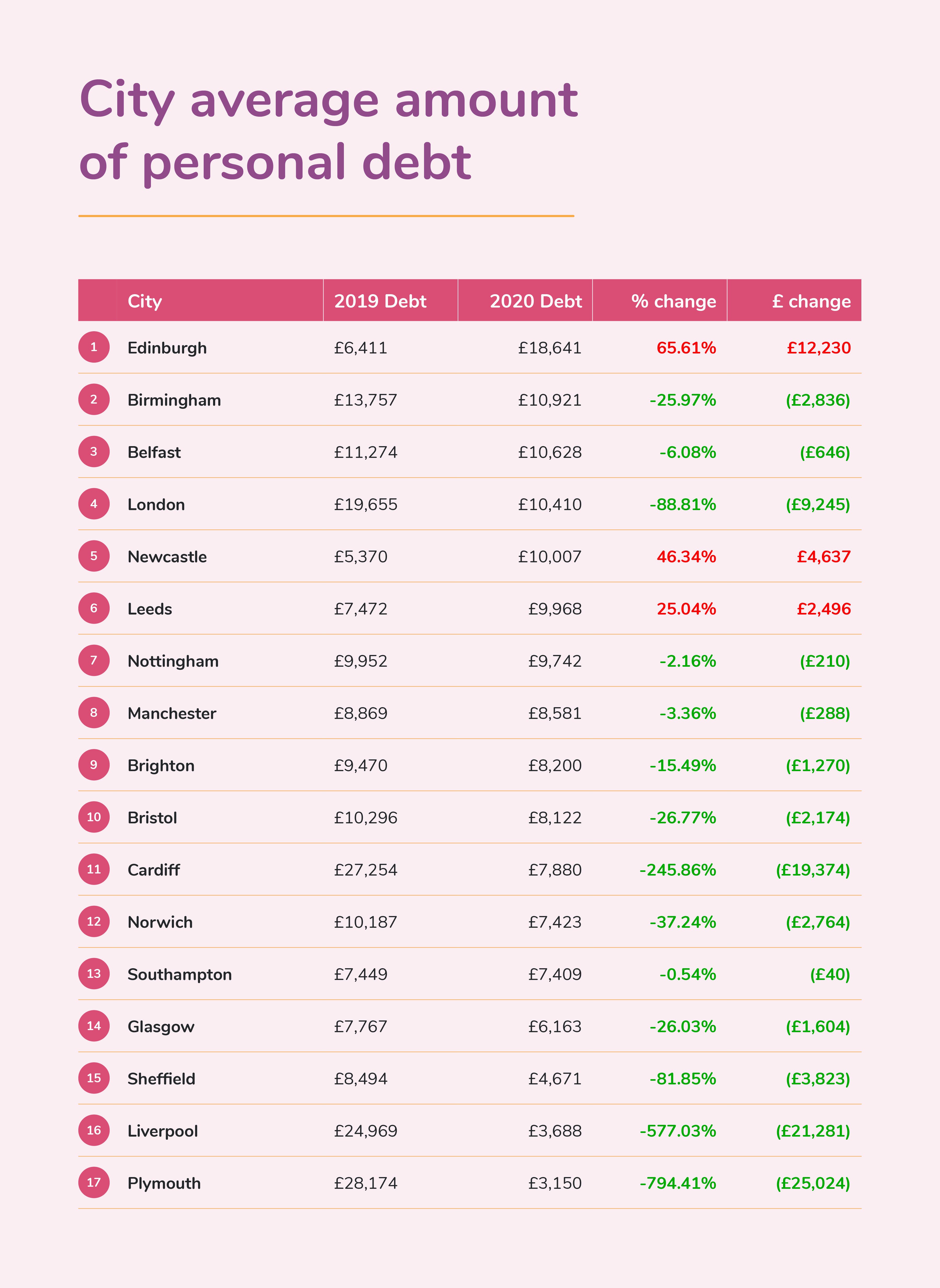 Those living in London entered 2021 in the most debt. According to the study, 36% of those living in the Greater London area carried debt into 2021. But the number of people, countrywide, carrying debt across from the 2020 into 2021, was actually down 10% year-on-year.

And it is clear that the debt situation is causing worry right across the country – with one in four people admitting they’re worried about their debt in the last year. And although this is 4% fewer people who are worried than there were at this time last year, it is clearly still a concern.

One in five Brits plan on paying off their debt by consolidating the different debts they owe, up 7% compared to 2019. But 44% of people say they don’t move debts to take advantage of better interest rates.

It's worrying to see that so many never move their debt around to take advantage of better interest rates, something that could save them hundreds of pounds a year and help them pay off their debts sooner.

If you are worried about your debts, it’s really important to get free impartial advice, don’t pay for it. StepChange is the UK’s leading debt charity and their experts can give free advice and support to help you get back on track with your finances.

StepChange, one of the UK’s leading debt charities, has created a ‘Covid Payment Plan’ (CVPP), specifically designed to help those whose finances have been hit hard by the pandemic.

Using the charity’s CVPP scheme, you could be offered a simple way to pay back the money you owe towards commitments like energy bills, credit cards and mortgages, based on what you can afford.

The reduced payments will last for as long as you’re having to manage on a reduced income - up to a maximum of 12 months. The scheme is designed as a short-term alternative to full debt advice and a longer term restructuring of your debts.

The charity has also created a tool that will help understand the extent of debt you are in. Through answering just five questions, StepChange can guide you on the next steps to take to help manage your debt.

How StepChange’s Covid Payment Plan could help you.

The following debt charities can also offer you independent advice and support. Some can also help you set up a free DMP:

The government-run Money Advice Service offers some simple steps to help with your debts.

We have also created a collection of guides that can help you answer your money-related questions during the coronavirus pandemic: