Where is the best place to relocate in the world? By taking into consideration a number of important factors our mortgage experts have been able to reveal the most attractive cities to move to.
Share this guide

Where are the best cities to relocate to around the world?

In a world where international travel is opening back up and remote working now tried and tested, there is now ample opportunity for people to relocate abroad and with that, start thinking about housing and comparing mortgages.

However, it is not just housing to consider when relocating across the globe. In fact there are many other social and economic factors that have to be taken into consideration when deciding the best city to relocate to, these factors are:

As well as the overall best cities to relocate to, the analysis reveals the most expensive and cheapest areas to move to. Additionally, the relocation cities with the best weather, and the best coastal relocation destinations. 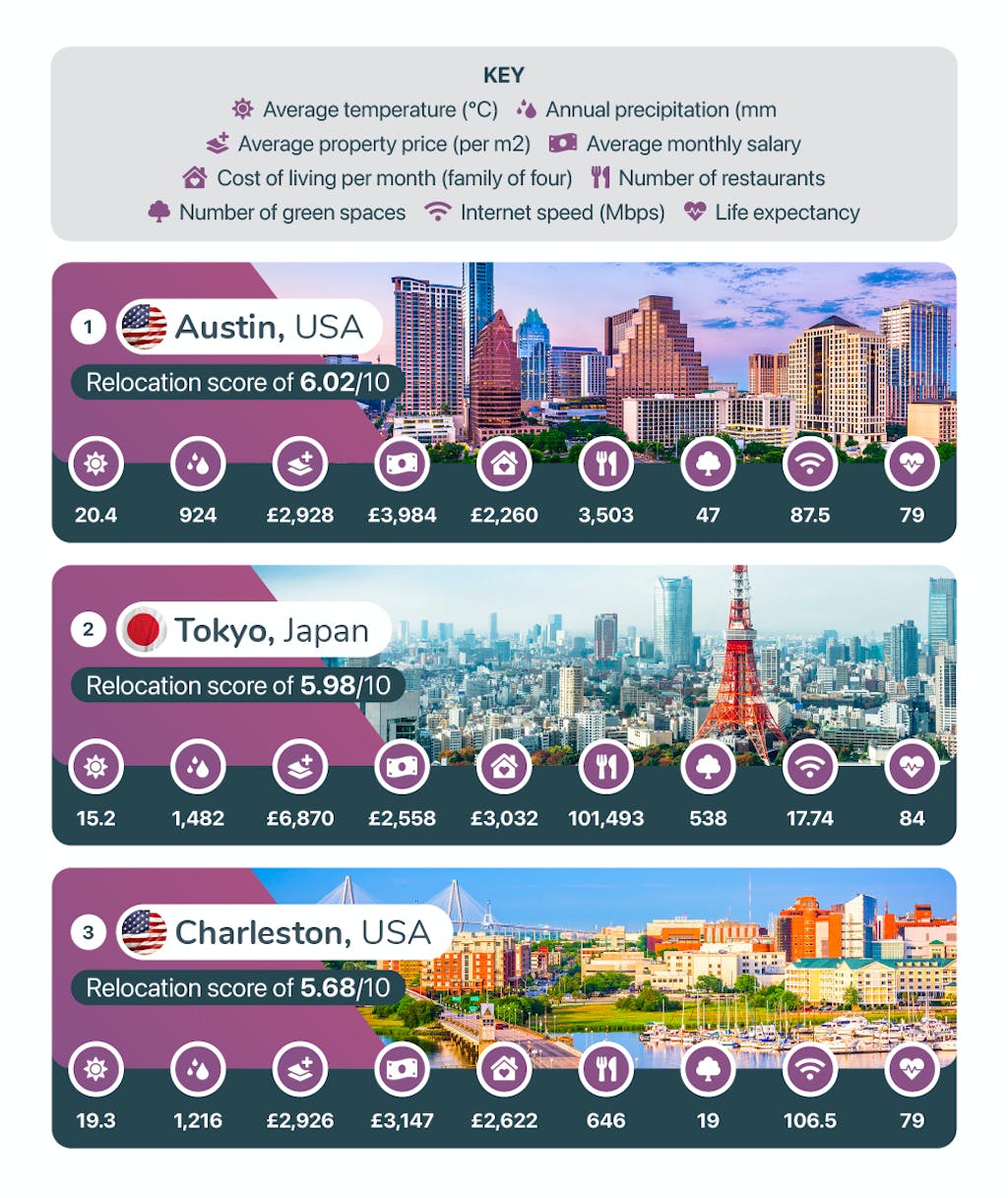 The best city in the world to relocate to is Austin, the fourth-largest city in the USA's second-largest state, Texas. Austin has the third-best internet speed of any city in the rankings, at 87.5 Mbps. Additionally, the city scores high in terms of average temperature (20.4°C), and average monthly salaries at £3,984.

The second-highest scoring city is Tokyo, Japan. It is the largest city in the world with a population of over 37 million people, suggesting its mass appeal. Tokyo scores well for its number of restaurants and green spaces and on top of this, it has the best average life expectancy, with residents living to 84.

Charleston has been a city of conflict throughout the generations, as it proved a crucial battleground in both the American War for Independence and the American Civil War. Despite its tumultuous past, Charleston is now the third best city to relocate to in the world. One factor it exceeded in is internet speed, the average is 106.5 Mbps, meaning that it is by far the fastest of any city on the list, additionally Charleston has a high ranking average monthly salary of £3,147. 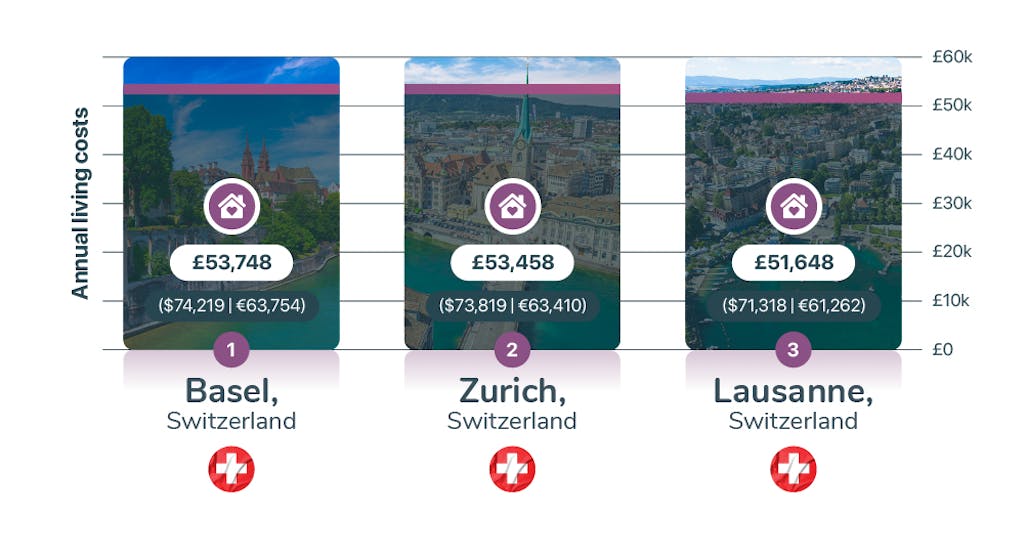 Zurich is the second-most populous Swiss city and is also the second most expensive city to relocate to. Zurich is only around £290 a year cheaper than Basel on average.

Lausanne makes it a hattrick for Switzerland by ranking in third for the most expensive living costs at £51,648. 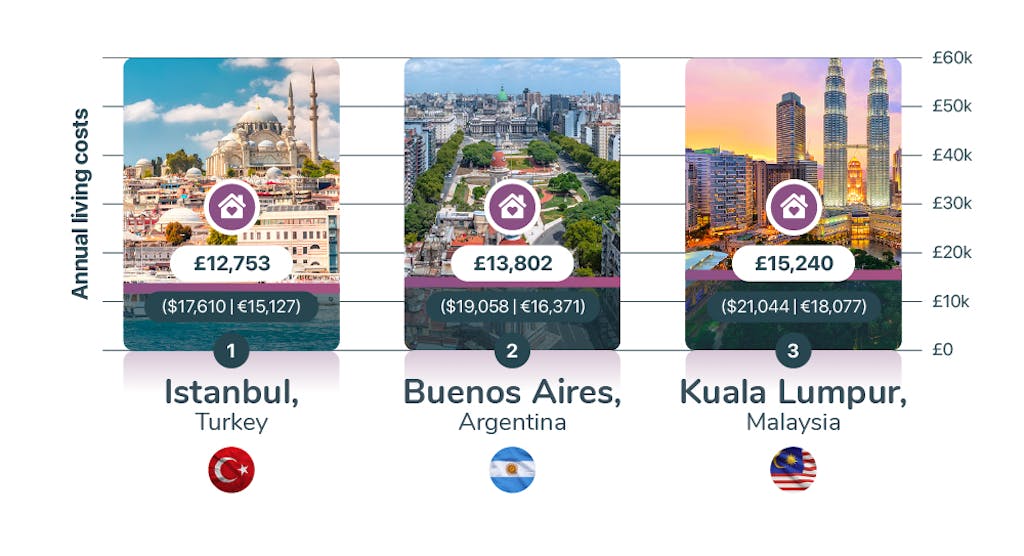 The most affordable relocation destination is Istanbul where average annual living costs are only £12,753. This is £40,995 less a year than Basel, and £15,963 less than the average.

Argentine capital Buenos Aires is the second most affordable location to relocate with average annual costs of £13,802, which is over £1,000 more expensive than Istanbul. 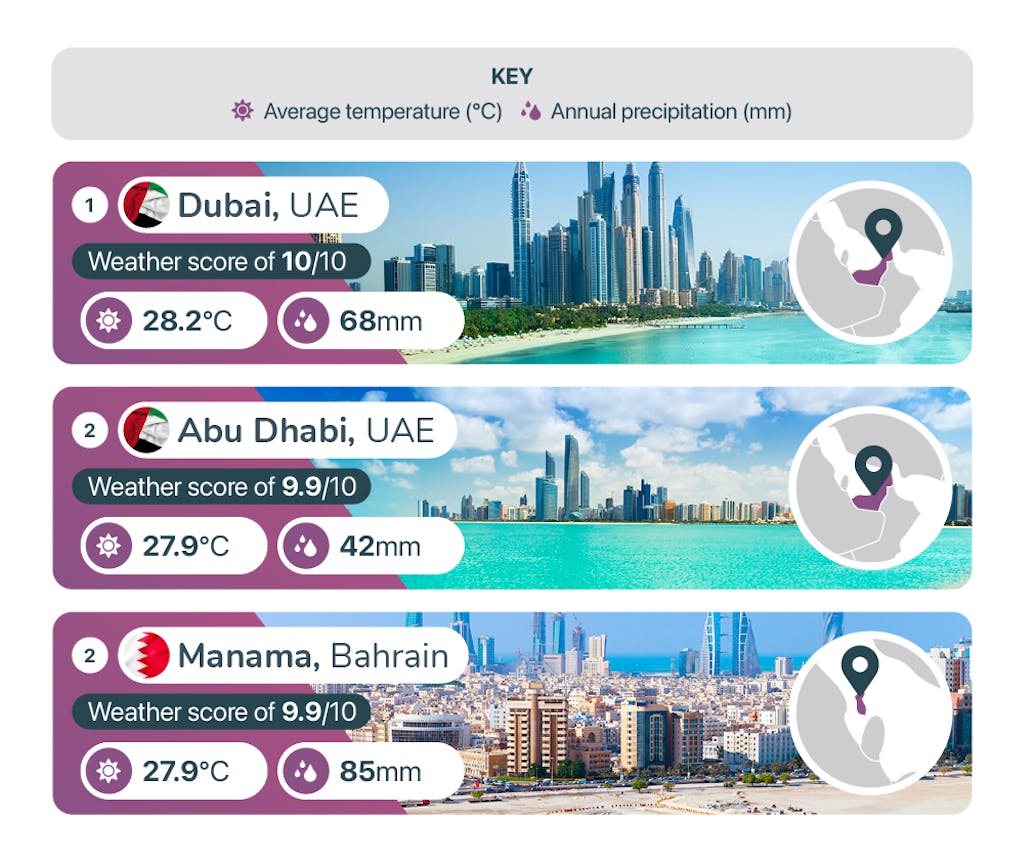 Dubai is the best relocation destination if you are looking for sunnier climes, as it scored a perfect 10. The average temperature in Dubai is 28.2 degrees celsius, and there is only 68mm of rainfall a year.

The capital of the UAE scores slightly lower than its neighbour with Abu Dhabi achieving 9.9/10. Temperatures are slightly lower at 27.9 degrees, but there is less rain on average with only 42mm falling.

The joint second-best relocation city in terms of weather is another Middle Eastern capital. The Bahraini city of Manama has the same average temperature as Abu Dhabi. 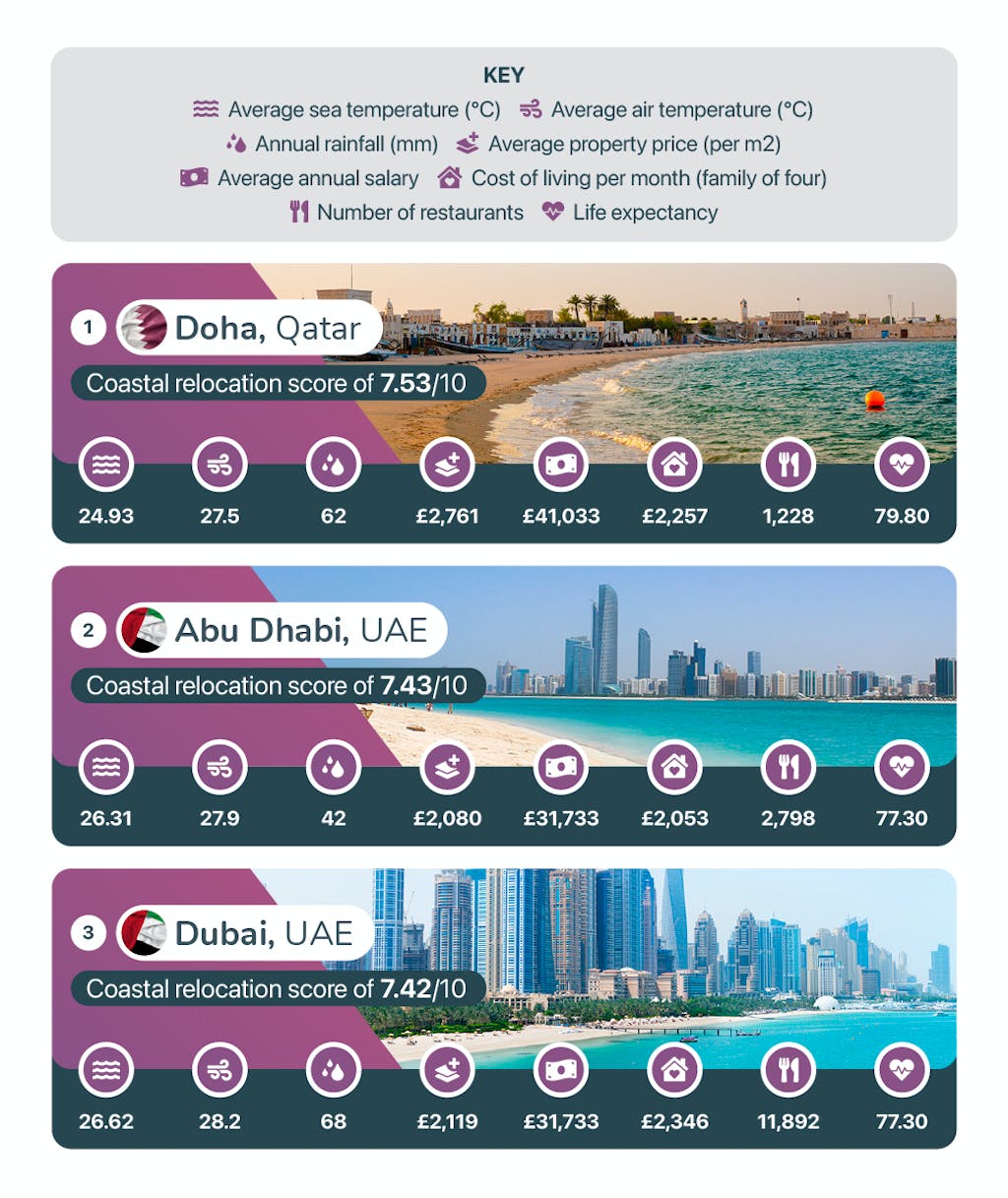 The Qatari city of Doha is the top relocation destination located on the coastline, scoring a 7.53/10. Water temperatures in Doha are 24.83 degrees on average and the city has high annual salaries of £41,033

Abu Dhabi is the second top-scoring location for weather, and is also second for the best coastal relocation destinations. Although air conditions are warmer in Doha, sea temperatures are higher in Abu Dhabi.

The third best coastal relocation city is Dubai where air and water temperatures are the highest at 28.2 and 26.62 degrees retrospectively. However, wages are lower at £31,733.

By looking through list articles of the best places to move to for expats, money.co.uk collated a list of cities to form their research.

Most expensive and affordable cities

The annual cost of living for each city was calculated using the monthly cost of living figures from Numbeo. These figures were then given a normalised score out of ten and ranked accordingly.

The average temperature and precipitation data for each city taken from climate-data.org were used to give a normalised score out of ten for each city, with higher temperatures ranking higher and higher rainfall ranking lower which was then ranked.

All data was gathered and correct as of October 2021.