In recent years, influencer culture has dominated the social media world, creating the newest trendsetters of a modern age. Our study reveals which city is producing the most influencers and crowns the top influencer hotspot.
Share this guide 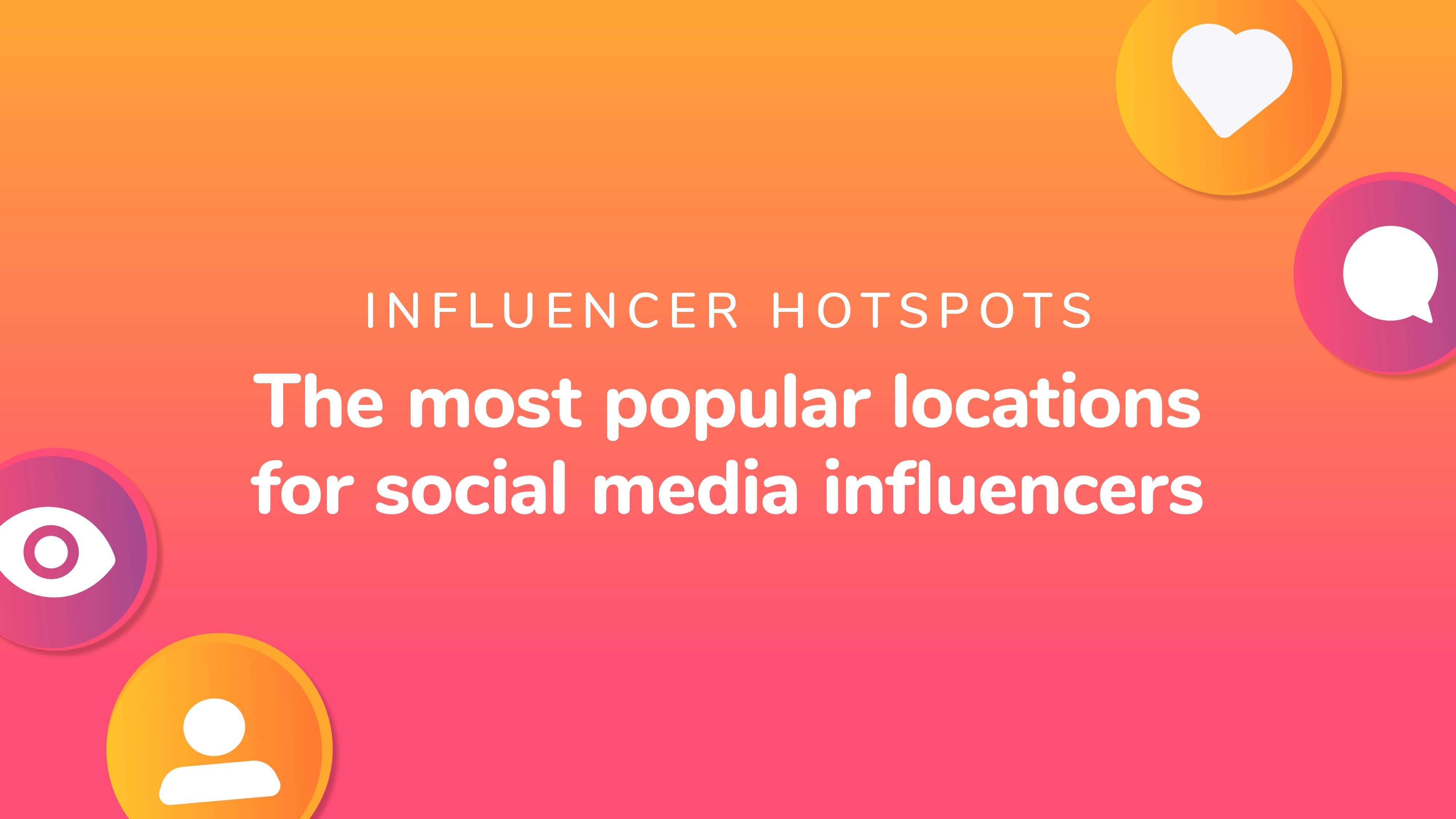 From beauty vlogs to TikTok dances, influencers have become an essential part of brand marketing and are now becoming the world's freshest celebs.

Much like celebrities, these influencers can reach a large scale audience from numerous social media platforms to help generate conversations, drive engagement and set cultural trends.

So, can just anyone become an influencer? 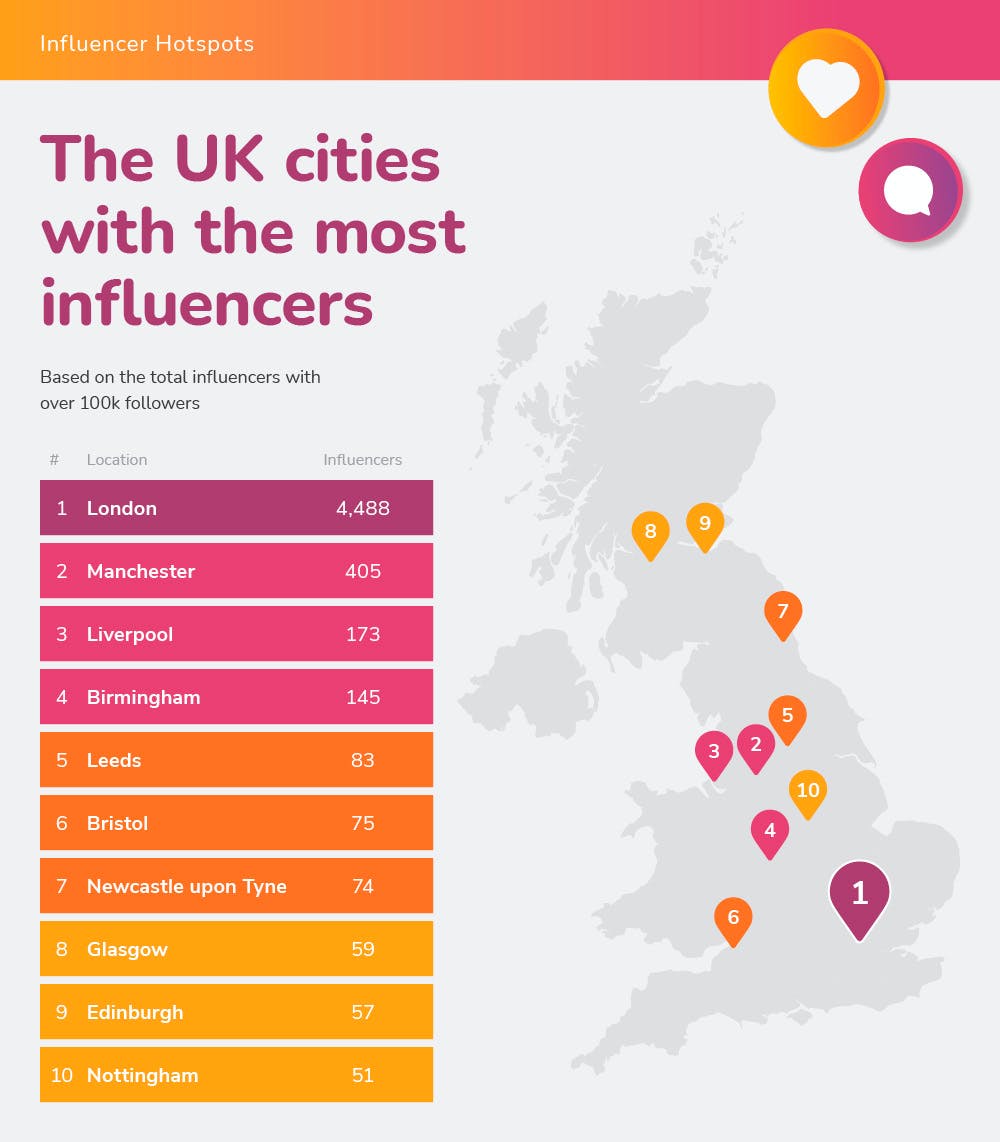 London alone is home to over 76% of the UK’s influencer scene, making it the ultimate UK hotspot for budding content creatives. This capital city oozes with culture, history and architecture making it the perfect backdrop for thousands of Instagram posts and reels. It is also home to some of the biggest brands headquarters, making ‘collab’ meetings all the more accessible.

The top three influencer categories thriving in London are lifestyle, beauty and music. With plenty of boutiques, bars and flagship stores to explore, London remains a central hub for lifestyle and beauty content in the UK, and also dominates in every other category in our study.

London is also home to some of the biggest TikTok houses in the UK. Houses, like ‘the Icon,’ are home to a number of Gen-Z TikTok influencers living together and creating videos for the platform. Similarly, big lifestyle influencers such as Olivia O’Neil, made the move to the big city to be at the heart of the action, enabling her to attend important brand meetings and launch events to propel her career forward. These opportunities are ideal when trying to expand their audiences, thus making London a top influencer hotspot.

London is also renowned for its world-class record labels and music venues, from the Royal Albert Hall to Wembley Stadium making it the ultimate hotspot for thousands of musical influencers as well. 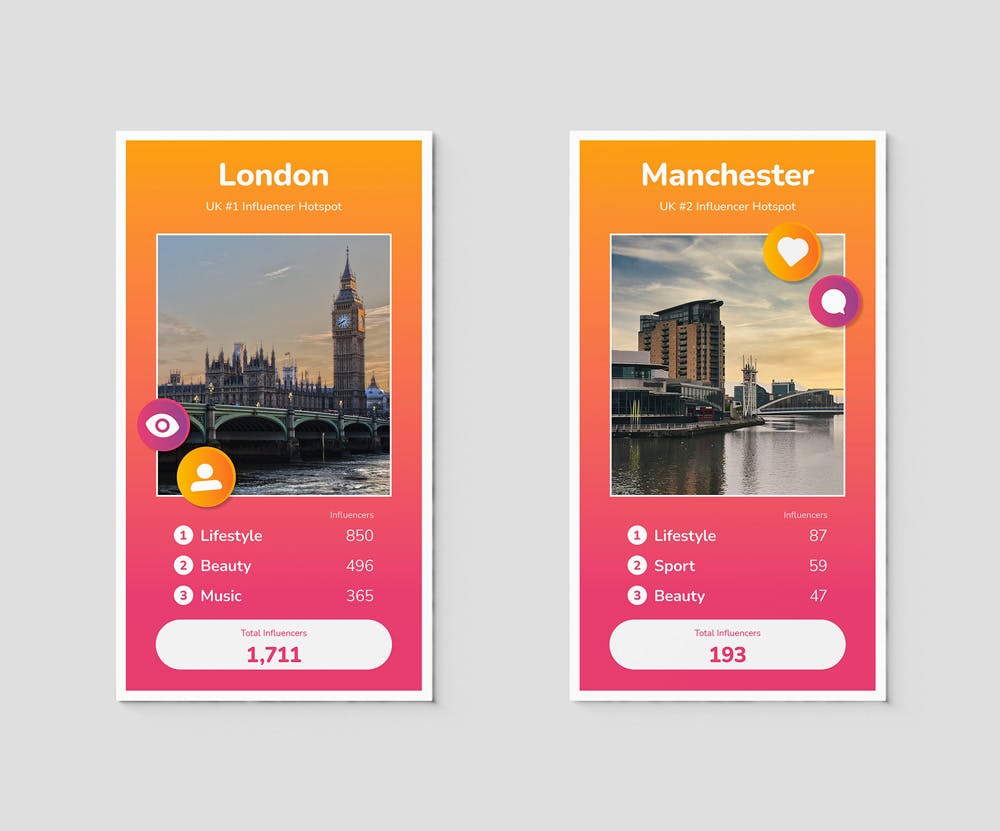 Sport influencers are the second-largest content creators in Manchester

Of the UK’s top influencers, 7% are currently hunkered down in Manchester, making it the second-largest influencer hotspot in the UK. However, as investment opportunities and world-renown brands move up north, it won’t be long before Manchester becomes the new mini London.

The top three influencer categories in Manchester are lifestyle, sports and beauty.

With the likes of Pretty Little Thing and Missguided both setting up head offices in Manchester, many of the UK’s top lifestyle and beauty influencers, such as Molly Mae, have followed suit in making the move up north. Fashion brands such as these endorse the influencer culture by creating thousands of brand deals each year, making Manchester an ideal home for budding lifestyle and beauty creators.

Manchester is also home to some of the world's most infamous sporting clubs, such as Manchester City and Manchester United, making sporting influencers its second-largest content creators. The city is rich in sporting history and has access to a vast array of sporting venues and opportunities, lending itself to being one of the biggest and best sporting influencer hotspots in the UK.

For example, former British artistic gymnast, Nile Wilson, has since turned to create content centred around his gymnastics career. However, it is his access to the Manchester Academy of Gymnastics that sets his content apart from many and allows him to give insight into the world of a former Olympian.

The top influencer categories in the UK 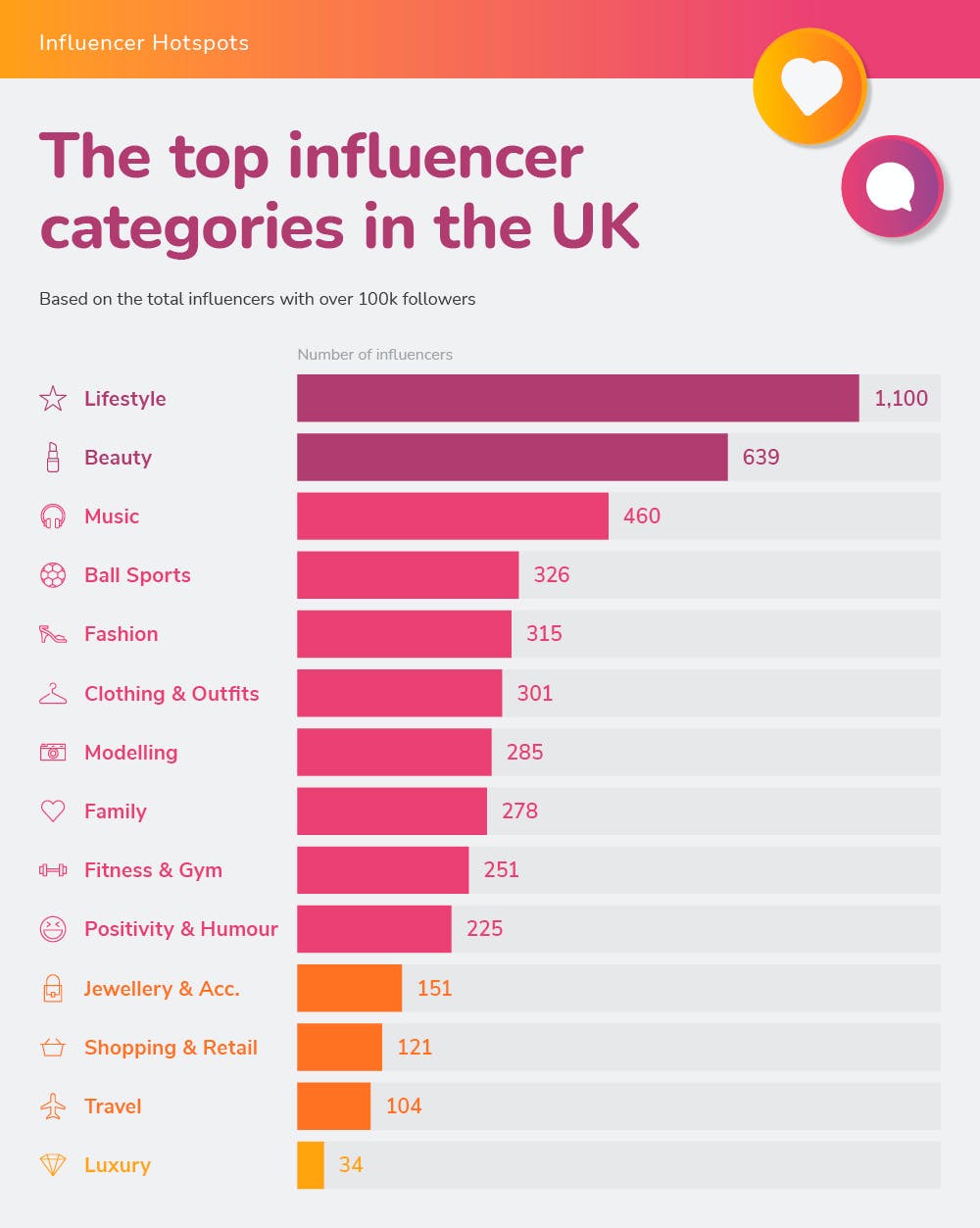 Lifestyle is the most popular influencer category in the UK, except in Liverpool

Lifestyle has the highest population of influencers in the UK, making up 18.85% of all UK influencers.

Content creators like Joe and Zoe Sugg are some of the biggest lifestyle influencers, opening up their lives to online audiences. Lifestyle influencers often create content within numerous sub-categories in beauty, gaming, fashion and much more to reflect their lifestyle and personality and also partake in product promotion.

The city is home to world-renowned football clubs such as Liverpool and Everton, and are also hosts to many prestigious sporting events, like the Open championships. Therefore, it’s no surprise that sport makes up the top percentage of influencers within Liverpool.

California is the top influencer hotspot in the USA 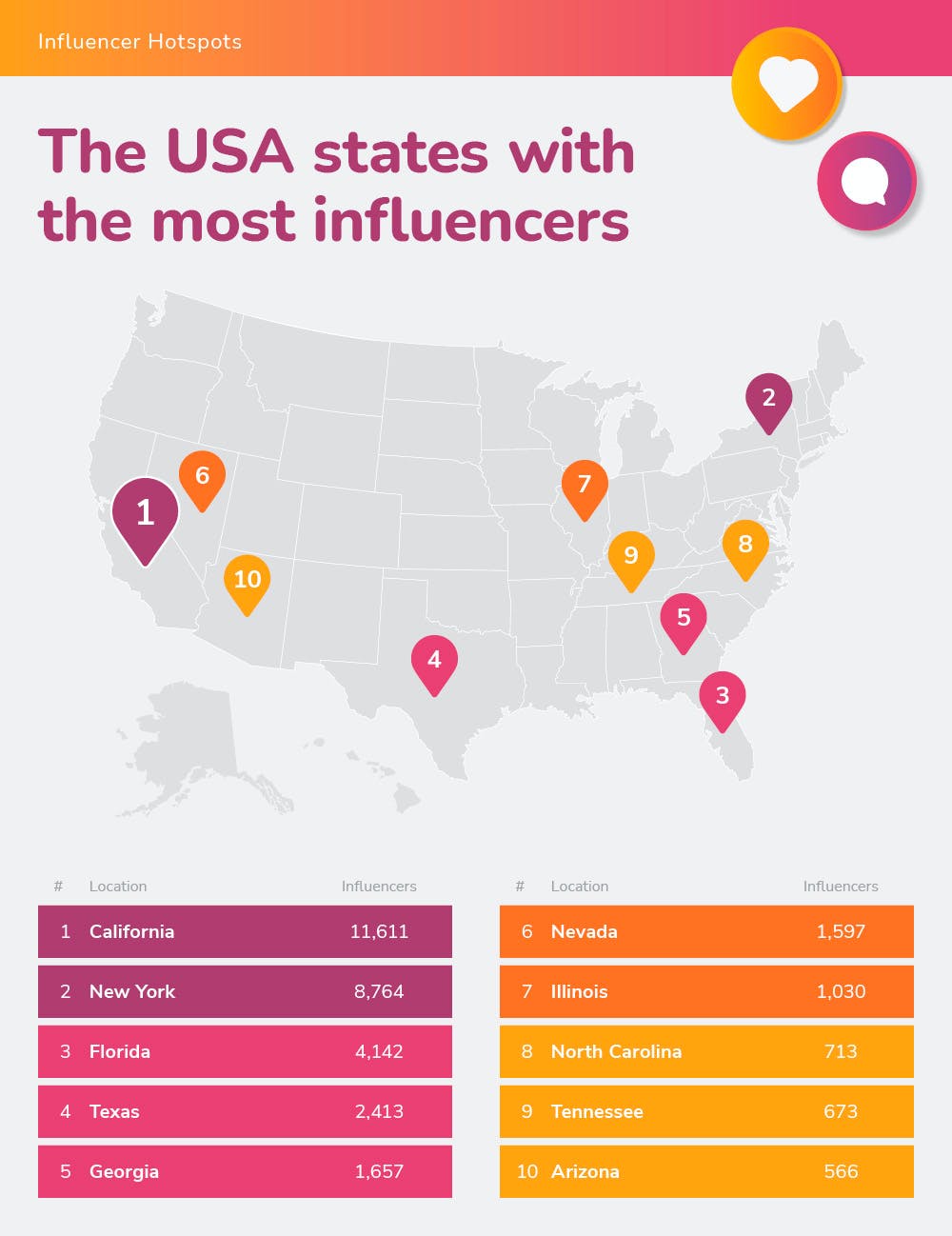 California is home to the largest percentage of content creators in the USA, dominating over 31% of the influencer scene. From Hollywood Hills to mile-long vineyards and beaches, this state is an influencer’s dream, enabling them to create all the aesthetic content they desire.

The top three influencer categories found in The Golden State are lifestyle, music and beauty. With its picturesque locations and vibrant cultures, lifestyle influencers are able to create and document their enviable ‘Cali lifestyle’ through social media, making it an ultimate influencer hotspot. LA is also home to the infamous TikTok ‘ Hype House’ full of teen personalities like Charli D'amelio, who create and collaborate on an array of content making LA a prime hotspot and creative hub for aspiring content creators.

Beauty influencers also thrive within LA as it adheres to the star-studded glitz and glam image, which the city upholds. Influencers like Nikita Dragun and Manny Gutierrez (Manny MUA) made the move to LA to further their careers, which helped facilitate collaborations with celebrities living nearby as well as each other.

And finally, California has always been at the heart of the entertainment industry, with LA retaining its all-important TV, movie and rock heritage. Many world-renowned bands and artists such as Green Day or Billie Elish have derived from California, making it a total hotspot for aspiring music influencers. 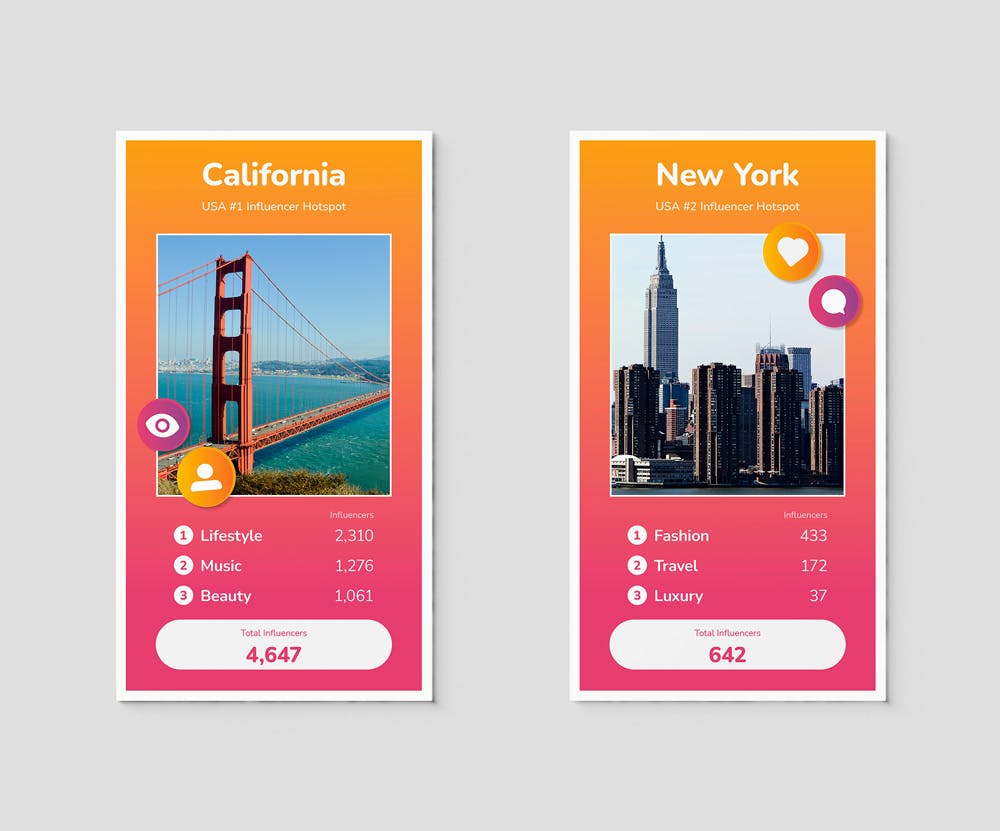 New York is the leading fashion hotspot in the USA

New York is home to 23% of all USA influencers, making it the second-largest influencer hotspot in the country. While lifestyle remains the most prominent category within New York, the population of fashion, travel and luxury influencers within the city is larger than any other state in the USA, crowning New York as the ultimate influencer hotspot within these three categories.

New York's cultural identity is heavily rooted within its world-class fashion industry and is home to hundreds of global fashion houses as well as the most iconic event of the year - New York Fashion Week. Therefore, it's no surprise that fashion influencers have flocked to the big city to be at the centre of the action.

Travel and luxury influencers also lend themselves to New York as both require some serious money. Living in New York doesn't come cheap, however in a city full of business savvy people, those more fortunate often partake in living the ultimate life of luxury. They can jet off to numerous exotic locations throughout the year, making them the perfect travel and luxury influencers.

The top influencer categories in the USA 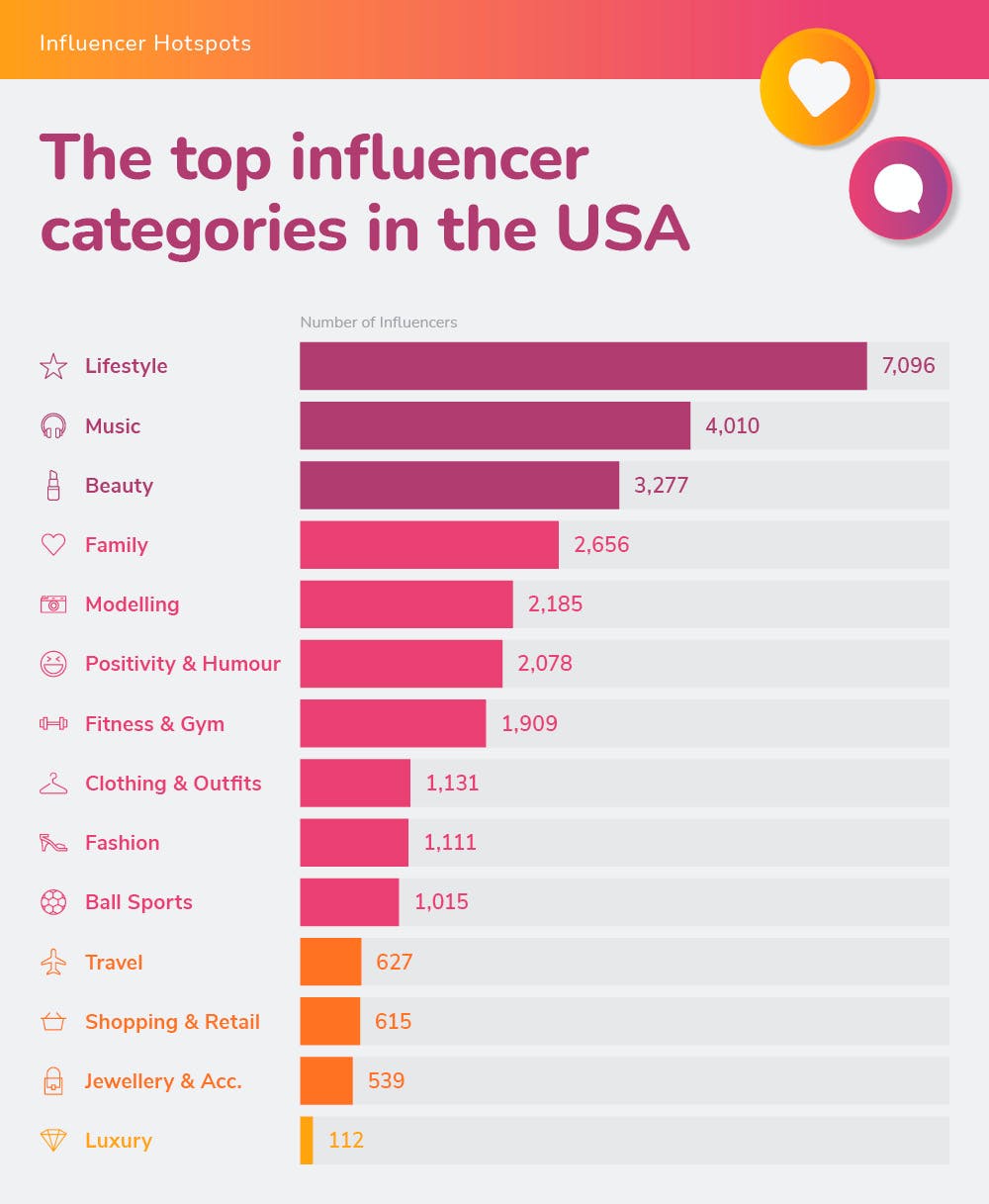 Unlike the rest of the USA, Tennessee is the only state to be home to more music influencers than lifestyle, emphasising its strong musical heritage. Tennessee is known as the birthplace of country music and is home to many influential artists such as Dolly Parton and Taylor Swift, making it the perfect influencer hotspot for aspiring young artists and musicians.

Influencer families are thriving within the USA

Influencer families are far more prevalent within the USA than in the UK, ranking as the fourth most populated influencer category in the USA.

From the likes of Kim Kardashian to Barack Obama, the USA loves to follow content from huge influential families and thus makes it one of the most populated influencer categories in a variety of states. Influencer families make it to the top three influencer categories within Florida, Texas, North Carolina, Tennessee and Arizona.

The UK’s top influencer families include the likes of Mrs Hinch (Sophie Hinchliffe) who specialises in home cleaning as well as the Royal family, who we doubt do much home cleaning at all.

The top three influencer categories in each USA state

The top three influencer categories in each US state

The biggest influencers in the world are those with the furthest reach to an array of followers. These celebrities have built up an enormous rapport with their audiences and therefore have a voice that will be listened to and heard by many. Due to their large social following, anything they post can influence public behaviours which brands utilise and monetise - making posts on Instagram a profitable income. 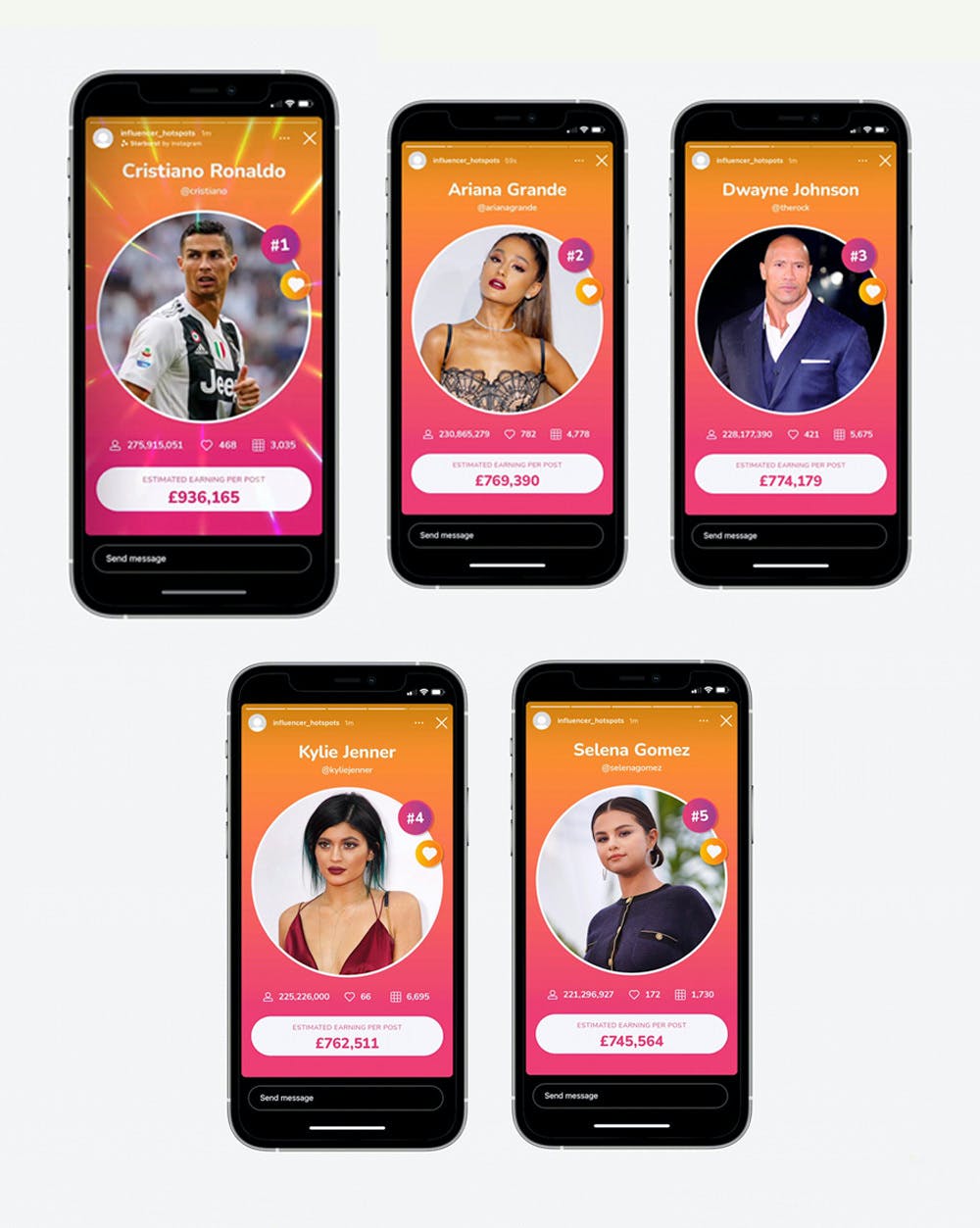 Cristiano Ronaldo is the biggest sporting influencer in the world due to his enormous social media following, while Ariana Grande and Selena Gomez are the world’s top music influencers. Kylie Jenner is considered the biggest beauty influencer while Dwayne Johnson (aka The Rock) is regarded as an actor and fitness influencer.

However, there are many influencers who solely create content to make a living. Sports and fitness influencers such as the world strongest man (2017) Eddie Hall, Courtney Black, Karina Elle and Matt Morsia (Matt Does), all use social media platforms to uphold their livelihoods. Likewise, beauty influencers like Abby Roberts have excelled in their influencing career by locking down incredible opportunities such as being a guest judge on the hit TV show Glow Up. It is opportunities like these that are sure to expand her audience and help further her influencing career.

Platforms such as Youtube, Instagram and Twitter also allow influencers to earn income from elsewhere, like partaking in brand deals, which can help to expand their reach of influence as well as further their careers.

Top used platforms by influencers in the UK 2020

TikTok is creating a new ecosystem of influencers and teen-celebrities

TikTok is one of the fastest-growing social media platforms to date, with their monthly active users rising nearly 800% throughout the start of the pandemic. As of February 2021, TikTok had approximately 86.56 million monthly active users via iOS devices worldwide, with its growth predicted to continue to increase over following the years.

As a result of TikTok’s success, new creative hubs have begun to derive from the platform like ‘the Hype House’ and 'the Icon’,  located in prime influencer hotspots such as L.A, California and London. These houses have created a new generation of teen celebrities, such as Charli d'Amelio and Addison Rae, and are changing the future of social media by expanding creative freedom to people worldwide and encouraging users to participate in viral trends.

TikTok is also becoming a huge platform for global businesses. A survey by Linqia showed that 68% of marketers plan on using TikTok for influencer marketing in 2021, allowing brands to engage with larger online audiences and help TikTok become the next leading influencer platform for creators and businesses alike.

Location plays an important role in the success of an influencer therefore, if you’re looking to relocate to an influencer hotspot to further your career, be sure to check out our mortgage comparison which will allow you to find the best mortgage deals for you.