Millions of us start each new year with a hopeful resolution - to lead a healthier lifestyle, be that drinking less, exercising more or eating better. However, these goals aren’t always as simple as they seem to follow through on, especially during a time of much uncertainty.
Share this guide

So, after revealing the healthiest cities to live in 2021 12 months ago, our experts have updated the list for the new year. This way, you’ll know where’s best to move to if you want as much help as possible to lead a healthier life.

If you are looking to move to a healthier city in the UK, make sure you compare mortgage deals to get the best option for you

This study analyses everything from life expectancy to air pollution, obesity rates, safety and number of sunlight hours in each location. However, this year the research has also taken into consideration factors that have been thrown into greater focus since the start of the global pandemic.

For the 2022 edition, we added metrics such as the accessibility of healthcare coverage and the number of mental health nurses, social workers, psychiatrists and psychologists in each country. The research also looked at the prevalence of mental health and substance use disorders, and the overall health expenditure of the country or city.

The healthiest countries in the world 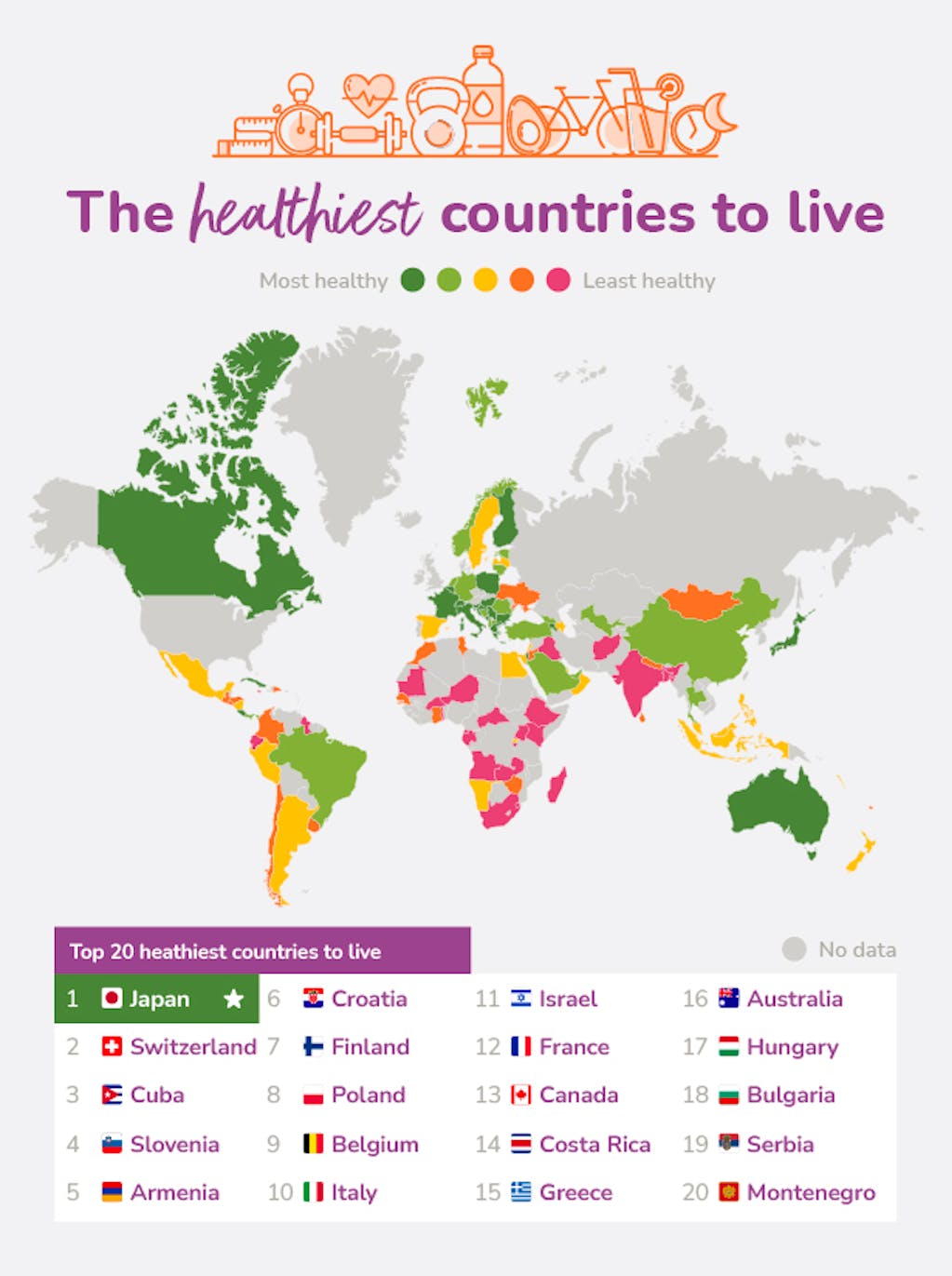 Japan is the healthiest country to live in 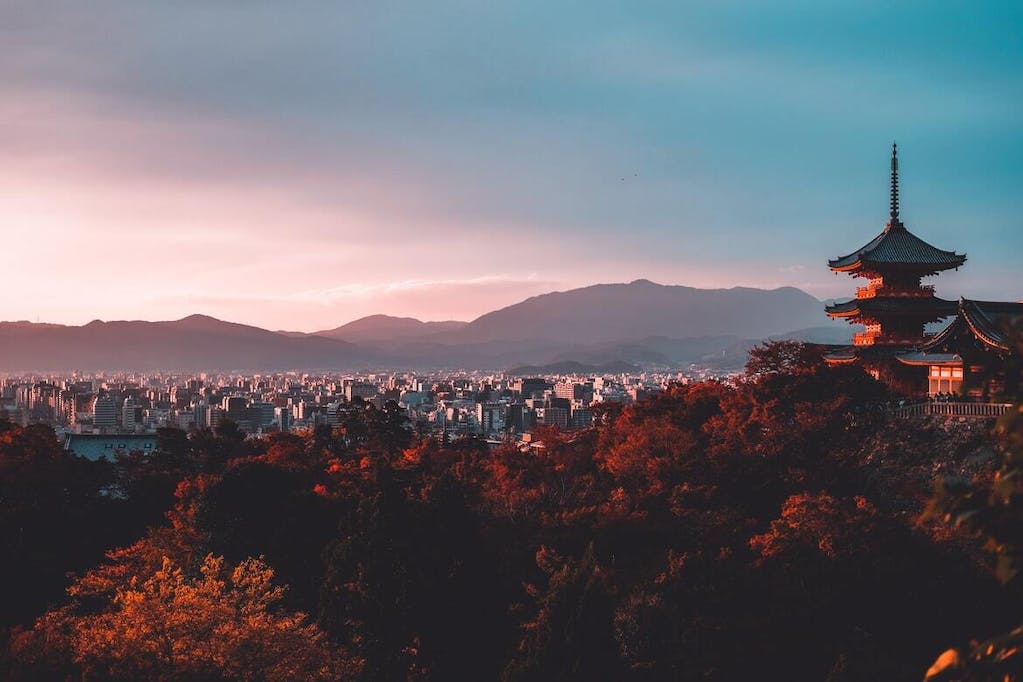 Japan won the title of the healthiest country in the world to live in thanks to a string of positives. The excellent public transport means few people own their own car, leading to a very low amount of air pollution. The Japanese attitude to food is very different to the western one, with much smaller portions and protein rich dishes, as well as a heightened respect towards the making and eating of food - a high contrast to the fast food culture of western countries.

Walking is also a primary way of getting around in Japan, meaning its residents stay fit and healthy by moving their bodies every day, proven by the country’s extremely low obesity rate of 3.6%. The life expectancy in Japan is the highest in the world as a result of the healthy lifestyle shared by a majority of its population - in fact, the oldest verified man ever was from Japan, and the oldest living person today is Kane Tanaka of Japan, who is currently 119 years young. It seems the world could stand to take a page out of Japan’s book.

Switzerland is best for a long life

It’s not just the stunning scenery that contributes to Switzerland’s high level of health and wellness (though it sure helps). The country’s life expectancy is 84 years old, which is 3 years longer than the UK’s average, so there’s plenty the country is getting right when it comes to healthy living.

Traditional Swiss food is made with fresh, whole ingredients, making their diet one with very little processed food. Swiss cities are also designed to get people walking, with paths all over to make getting from place to place on foot very achievable. As a result of the ease of daily exercise, the country’s obesity rate is very low. More walking also means lower emissions, so Switzerland’s fresh alpine air is among the cleanest in the world. The country doesn’t get heaps of sunlight each year, but alongside the rest of Switzerland’s healthy habits, popping a vitamin D tablet is an inconvenience we’d be willing to add to our daily routine.

The country with the most mental health professionals

Norway has the most psychiatrists per 100,000 people

In Norway, there are 48.04 psychiatrists for every 100,000 people - more than any other country in the world. The country has a fairly high rate of mental health and substance abuse disorders compared to the rest of the world: 16.2% of the population suffer from one. As a result, it makes sense that many people in the country would train to help this section of the population. Scandinavian countries are often referred to as the happiest countries in the world, so this large number of mental health professionals could well be contributing to retaining this reputation for Norway.

Nurses aren’t hard to come by in Turkey

For every 100,000 people there are 150.25 nurses in Turkey, so the country is well-equipped to deal with the health problems of its residents. Healthcare is also free, making it easily accessible to the general population. The health expenditure is only 4.12% of the GDP, but this clearly isn’t putting people off from training to be in the healthcare industry. The country’s average life expectancy is 82, which is among the highest in the world - potentially, the large numbers of nurses could have an effect on this.

Canada has the most social workers of any country

The country with the most social workers per 100,000 people by far is Canada, with 145.4. Social workers were one of the top 20 most in-demand jobs in Canada in 2020, so if there was ever a time to make this your career, it’s now. The country spends 10.79% of its GDP on healthcare, among the highest expenditures on our index, showing that there is clearly no lack of resources when it comes to social work and healthcare in Canada.

There are lots of psychologists in Argentina

Therapy plays a huge role in Argentine culture. The country has the highest number of psychologists per capita of any country in the world, with 222.6 per 100,000 people. Residents see therapy and, more specifically, psychoanalysis, as vital to development and good health. Talking about therapy is commonplace in Argentina, and there’s no stigma associated with seeking out this form of mental health support as a result. Only 11.06% of the population suffers with a mental health or substance abuse disorder, a number that is definitely kept low by this engrained tradition of mental health support.

The healthiest cities in the world 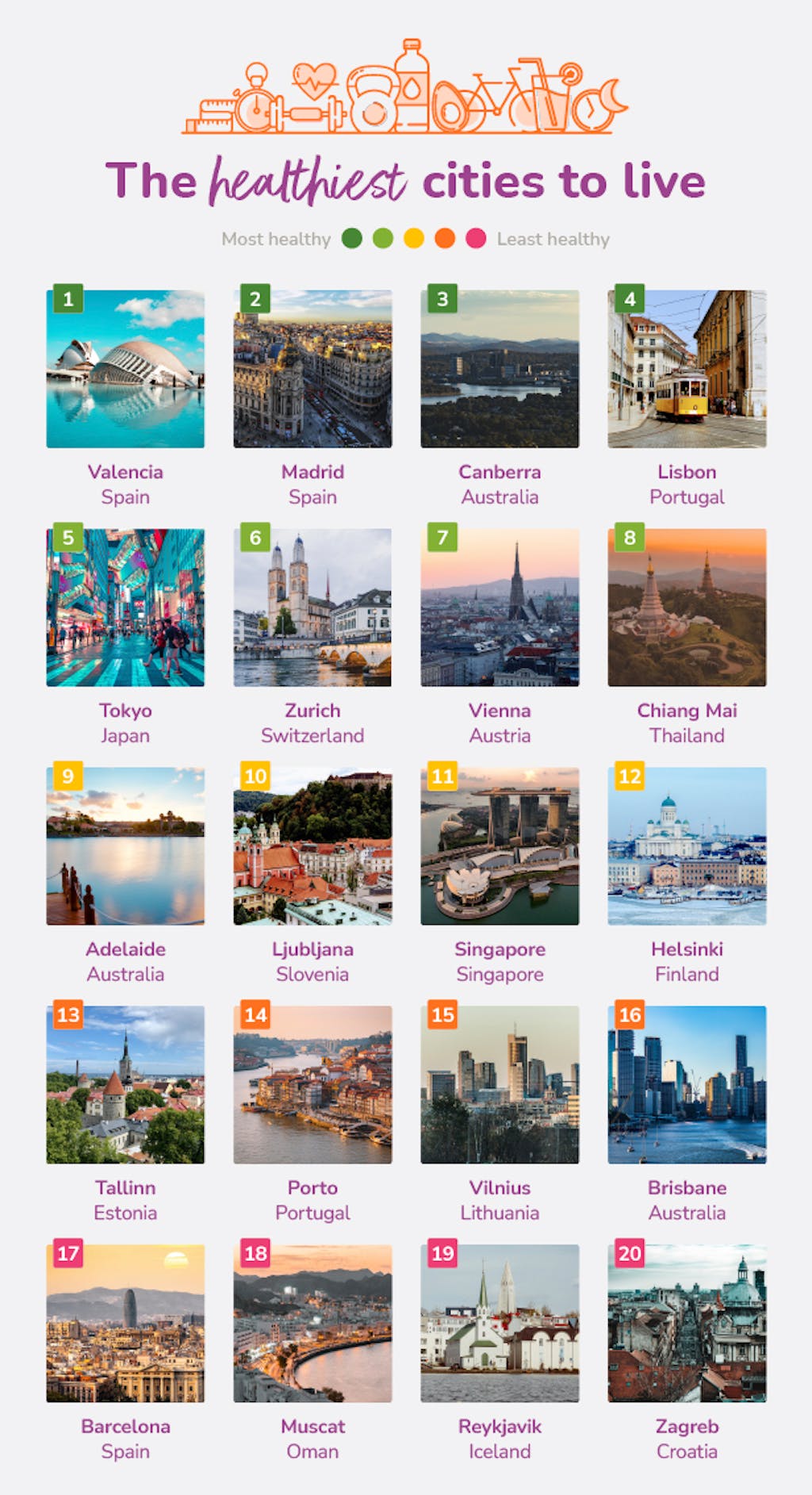 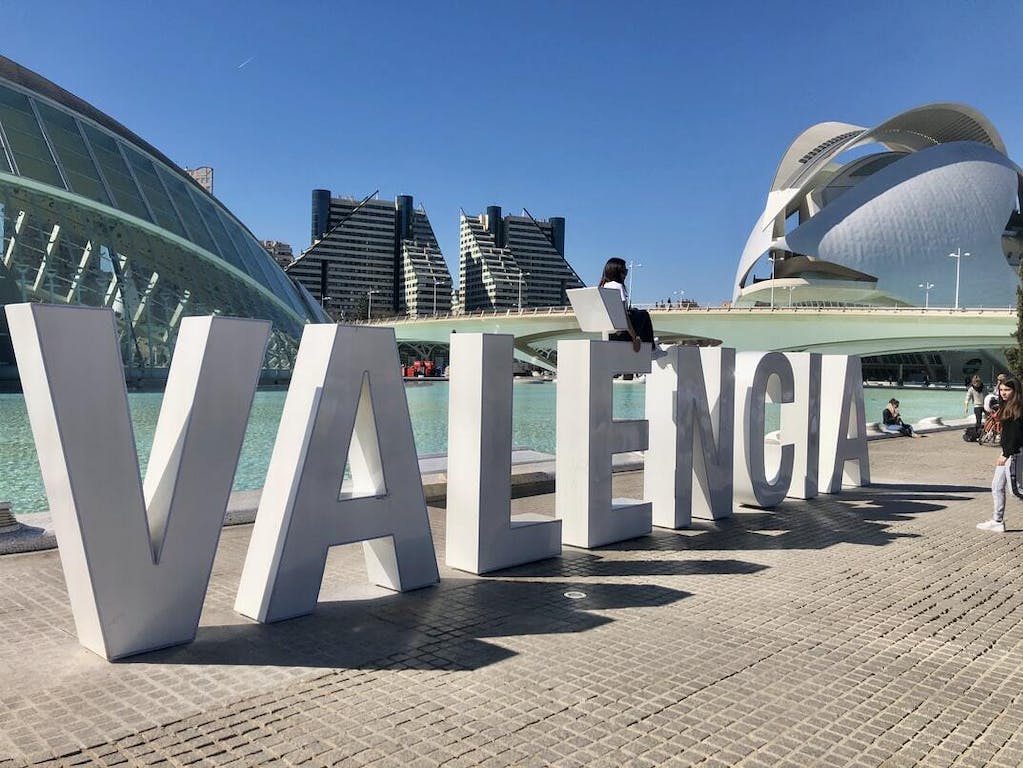 Retaining its title for the healthiest city in the world, Valencia is in the top spot according to our 2022 data. Boasting possibly the best paella in the world and some glorious weather, the city also has low pollution rates and very good healthcare. Life expectancy is high at 83.5, giving residents a long life to enjoy all the offerings Valencia holds. The musical and cultural heritage of the city is rich, and residents there put a strong emphasis on social connection, leading to a very healthy work-life balance.

Canberra, Australia has improved its health score since 2021

One city that has improved its health significantly since last year’s report is Canberra. Canberra is one of the safest cities in the world, and has a high life expectancy of 82.9 years. It also has very low rates of air pollution, and the sun shines a LOT - there are 2,813.7 hours of sunlight every year in Canberra, so there’s no lack of vitamin D for the residents. There’s plenty to do in the city, from world-famous galleries to stunning nature reserves, so if your health goals are going to take you to Canberra, you won’t be lost for things to do during the day - reaching your step goal has never been easier.

The cities with the least pollution

Helsinki has the cleanest air

Finland is the least polluted country in the world, so it’s no shock that its capital, Helsinki, tops the list of the cities with the cleanest air around. The country has strict environmental regulations, with renewable energy, electric vehicles and environmental conservation held in high regard. As a result, the people of Helsinki are breathing some of the purest air around.

Canberra and Wellington are in second and third place when it comes to the cities with the cleanest air in the world. The Australian government has put measures in place to improve the air quality in recent years, and this has clearly paid off in the capital. Meanwhile in New Zealand, the low population density, coastal location and famously high wind clearing much of the pollution away mean that the air quality tends to be good all year round, and the slow phasing out of fossil fuels to burn for warmth in colder areas means this is only getting better.

The safest cities in the world

If you want to live out your healthy days in the safest city possible, Zurich is the dream. The city has an extremely low crime rate, so you can enjoy the stunning scenery, rich culture and luxury shopping opportunities without any worries. Don’t worry - your brand new Gucci handbag isn’t going anywhere.

Muscat, Oman is the second safest city in our index

Muscat is known for being an extremely safe and friendly city to visit. Despite being surrounded by fairly volatile countries, Oman has a very low crime rate and residents there are extremely welcoming to any visitors. There are so many things to see in Muscat, especially the beautiful buildings and mosques all over the city. Whether you’re travelling solo, with friends or family, or uprooting your life to live in a healthy, crime-free city, Muscat is worth a visit.

The Healthiest Places to Live Index utilises 14 metrics at country level and 7 metrics for city level. The metrics are:

- Prevalence  Mental and substance use disorders

These metrics were all chosen due to them being considered contributing factors toward indicators of physical health/access to physical health. The data was pulled for all available countries and cities the data sources provided. Each of the metrics were assigned an index to rank each city/country against one another, which once averaged provided a total index across all metrics.

Some countries were omitted due to lack of data across all metrics included in this study. Further to these countries, those that had more than 3 metrics missing data (minimum required metrics with data is 10 out of 13) were removed from the study.

The cities that were analysed was decided by collecting as much data for each metric for as many cities as possible, once all the data was collected there was a list of 700+ cities, the cities that didn't have data for all of the metrics were removed, this left a list of 96 cities all of which have data for every index point.