Why there's never been a better time to ditch your TV package...

If you're paying a fortune each month for a Sky or Virgin Media subscription, now could be the time to think about cancelling. Here are the best ways to get your TV and movie fix for less.
Share this guide 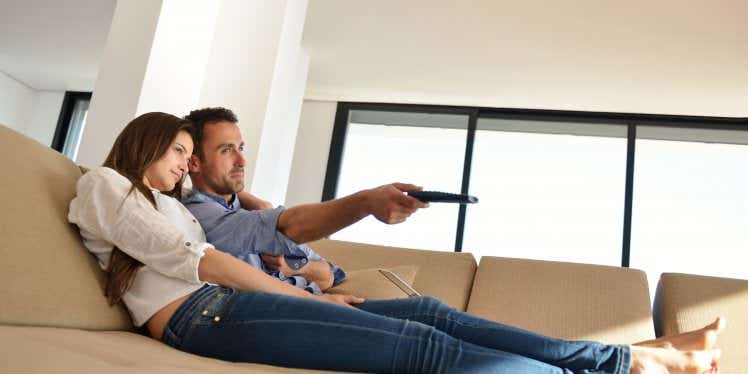 If it's live telly you're after, some of the UK's most popular shows are available on Freeview.

In recent years, millions of us have tuned in to watch Planet Earth II, The Great British Bake Off, and I'm A Celebrity — all of which were shown on terrestrial channels.

Freeview offers over 70 TV channels, 15 HD channels and more than 30 radio stations, including:

Along with soaps, sport and original dramas, digital channels like E4 show hit US sitcoms and dramas. You can also watch movies with Film4, which show a mix of Hollywood blockbusters and world cinema.

If you have a TV with Freeview built in, it won't cost you anything to start watching digital channels, though you will need a TV licence. If you have an older TV, Freeview boxes cost less than £30 and just need to be plugged into your TV with your aerial and a SCART lead or HDMI cable.

If you prefer to watch TV shows and films on demand, the main UK terrestrial channels all have free online catch up services that let you do exactly that:

All of these services are free, but you'll need a TV licence to use BBC iPlayer. The length of time content is available for varies, so check the terms and conditions for details.

You can find out whether you need a TV Licence and how to get one here.

Amazon Prime video includes over 15,000 TV shows and films, including original series like Transparent and The Man in the High Castle.

Prime also includes several other perks like free delivery from Amazon, a music streaming service, free Kindle books and digital photo storage. It costs £7.99 a month or £79 a year.

If you just want to watch films and box sets, you can opt for Prime Video, which is only £5.99 a month.

Here is where you can get a 30-day free trial of Amazon Prime to try it out.

You can keep the service if you are impressed with the range of films and TV shows as well as Prime's other features. If not, you can cancel it after 30 days and pay nothing.

Here's more about Amazon Prime and whether it's worth the cost

Netflix is one of the most popular streaming services, thanks to original content like Stranger Things and Orange is the New Black.

Netflix contracts only run for 30 days, so you can cancel whenever you like without paying a fine.

The Standard and Premium packages also let you stream from more than one device, so if someone in your household already has an account you may be able to watch content for free.

Now TV is a non-subscription service, which lets you pay daily, weekly or monthly for the TV you want to watch. It's good if you watch seasonal TV shows, like Game of Thrones or Westworld, or if you want to watch certain live sports.

You can now get broadband, home phone and TV in one bundle with the Now TV Combo.

Their cheapest bundle is £29.99 a month, compared to the equivalent Sky package which would set you back over £50 a month.

Like Now TV, the Combo package comes without a contract, so you can cancel whenever you like. You can tailor your package too, so you can get faster broadband and more channels if you pay more.

There are plenty of alternatives to using Sky or Virgin's pay per view movie channels:

The boxes themselves are. They work similarly to software like Windows Media Player, so you're not going to get arrested just for owning an unaltered Kodi box.

However, when they're pre-loaded with add-ons that let you watch films, TV or paid sport for free, you could be breaking copyright law.

Streaming copyrighted content using a Kodi box could lead to a fine, so you're best off staying clear.