Each year, 1.5 million students come from around the world to study at universities in the UK. In this guide we explore how a reduction in overseas student fees may financially impact academic institutions across the country.
Share this guide 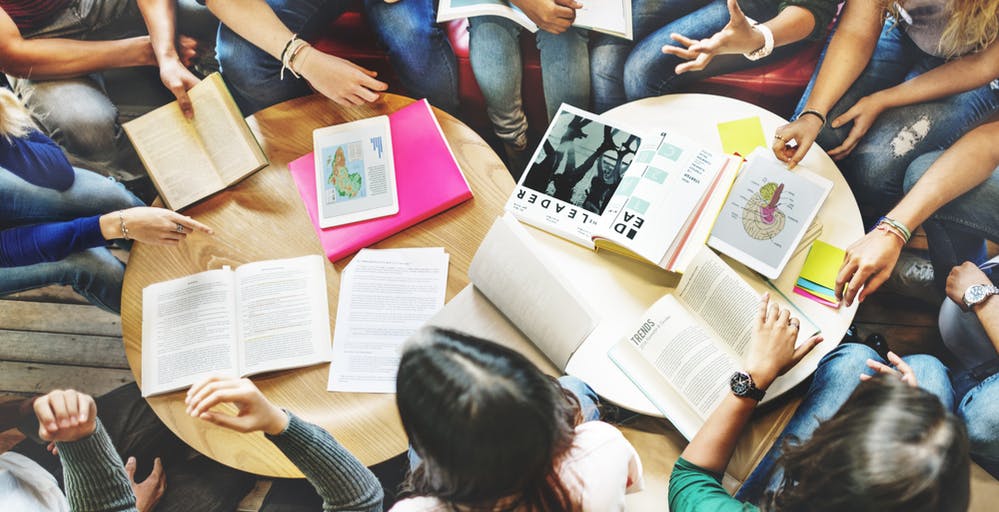 The outbreak of the coronavirus pandemic saw educational institutions halt in-person classes across the world earlier this year. Since March, the majority of lectures, seminars and workshops in the UK took place from the confines of students' bedrooms, living rooms and kitchens.

As students prepare to start their Autumn/Winter semester, many universities have announced that not all students will be able to return to lecture theatres and classrooms this year, to ensure social distancing restrictions can be enforced.

While the number of international students that have been accepted on UK courses has increased, UCAS has emphasised that some have put their offers on hold.

Before heading off to university consider taking out a savings account to help manage your money and your budget.

With this in mind, the personal finance experts at money.co.uk have investigated how much money universities in the UK could lose from international students not attending this year.

For each university, we have analysed how much money each institution would lose in the year 2020/21 if international student placements were not filled. In addition, we also used a conservative estimate of 20% attendance to understand how our higher education institutions would be affected following a significant decline in international students.

Additionally, we also uncovered the losses that each university would incur if all international places were taken up by British students, on the basis of a universities international fee, vs an EU student fee.

Total losses across the UK

Research from personal finance experts, money.co.uk discovered that universities could lose an eye-watering total of £2,606,034,725 should International Student placements be left vacant across all university institutions in the UK for first degrees.

The COVID-19 pandemic means that there is a significant hurdle for the usual influx of international students to British universities this year.

With visa centres shut, multiple restrictions on travel, and life on campus having stringent social distancing rules in place, there are multiple barriers for international students hoping to study in the UK.

Most recent reports from British universities highlight that while international placements have not experienced a dramatic drop yet, there is a huge concern that people who have registered for places are still yet to revoke them. Institutions have highlighted concerns that many international students are likely to do so once the semester begins.

Nick Hillman, Head of Higher Education Policy at the London School of Economics has said: “It is a double whammy if international students do not turn up because you have got an empty place that you are paying for and, secondly, you are not getting the additional money that international students normally pay that would both cover the costs of their place and cover an extra slug of income that universities normally put towards research.”

If places across universities that were initially reserved for International students are taken up by British students, losses would still total £1,183,060,975. However, as highlighted by Mr Hellman, it is unlikely that places will easily be filled by British students, as the term is likely to have started prior to International Students pulling out of their university place. 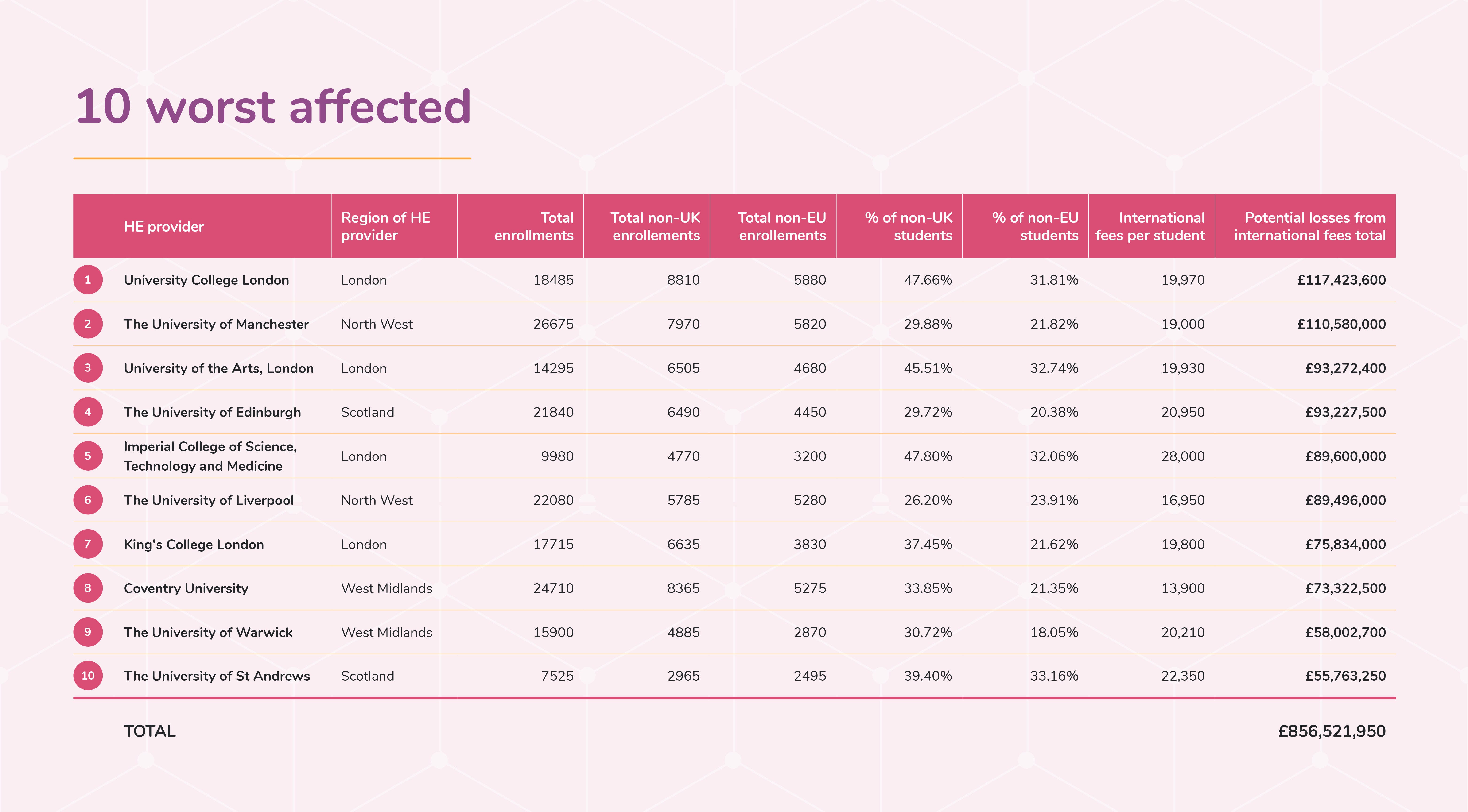 University College London (UCL) looks set to be the biggest loser when it comes to international fees - an eye-watering £117 million. This is down to the fact that a third (32%) of the central London institution’s yearly intake is usually made up of international students.

However, should a fifth of international students choose to take up their place (as is predicted), UCL would receive almost £25.5 million in fees.

If all international course places were to be taken up by EU based students, UCL could still lose over £63 million. With one place for an international student being worth more than the value of two EU students, figures highlight the extent of the financial hit in potential takings to the university this year.

Additionally, three other London universities are set to suffer the biggest financial hit from having less international students attending this year. Alongside UCL, universities that specialise in Science and Medicine, such as Imperial College and King’s College London are heavily involved in research surrounding COVID-19, which requires face-to-face contact.

If all international places were taken up by EU students within the three universities in the top 10 that specialise in Science and Medicine, they would lose £163,440,100 in total. As the world continues to suffer due to the effects of the Coronavirus pandemic, funding for these universities has never been so vital. Across Russell Group universities, a total of over £1 billion would be lost, should all international university placements end up being vacant.

While the total takings are not as high as others within the top 10, The London School of Economics (LSE) takes in the highest proportion of international students. With two-fifths (40%) of student intake within LSE usually arriving from non-EU countries, financially they would be the worst hit.

Contrastingly, just 8% of the student body at the University of York and Queen’s University Belfast are non-EU students. However, losses for each of those institutions could still amount to £20 million in lost international fees, should all places for non-EU students be defaulted. 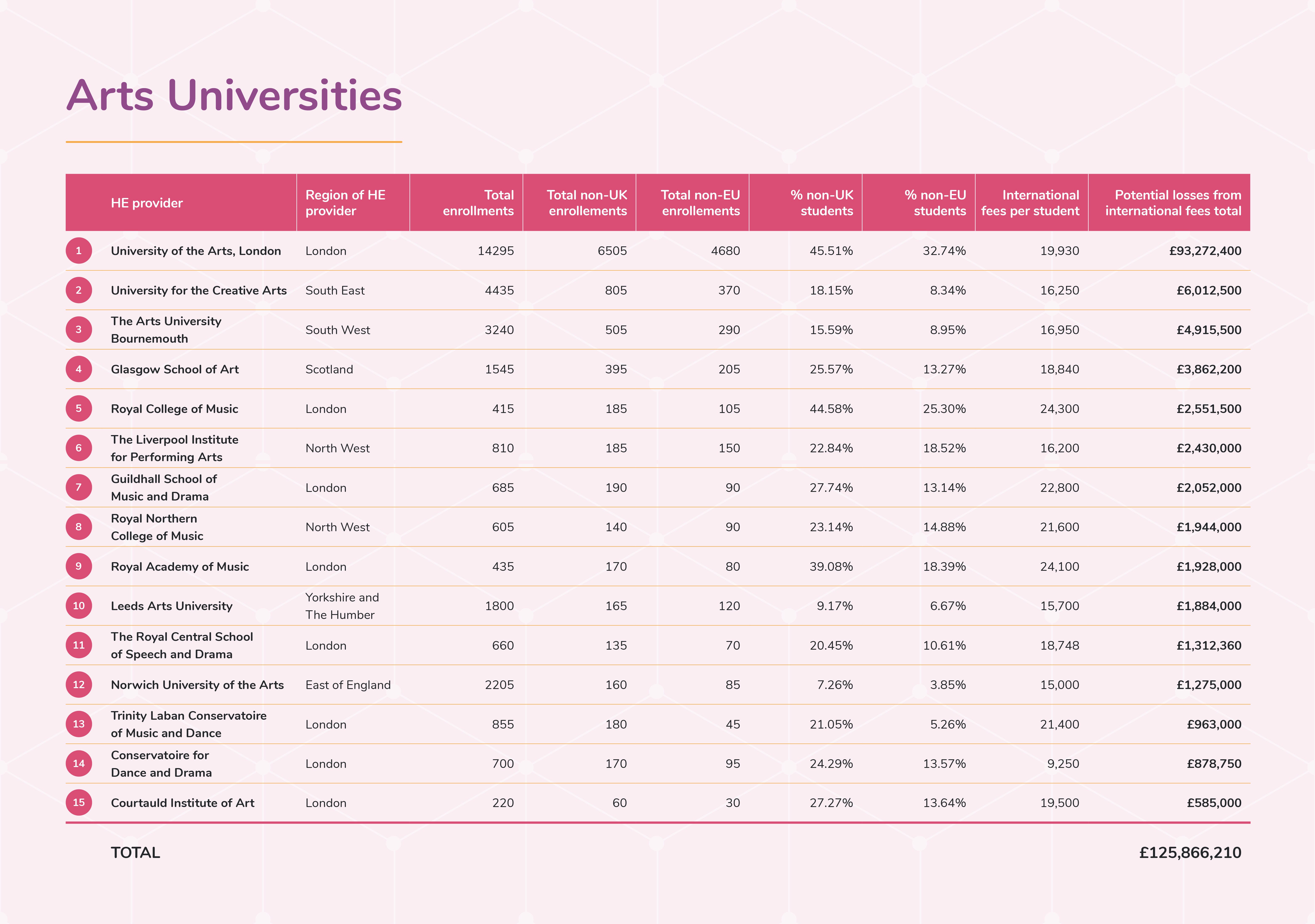 Many British universities are renowned for their arts programmes. Earlier this year, the QS World University recognised The Royal College of Art as the top university in the world to study art and design. As a postgraduate institution, 48% of its students come from overseas and is thus expected to be significantly impacted by the fall in international enrollees.

The University of the Arts, London and Glasgow School of Art are also in the Top 10 Art and Design universities worldwide and will suffer from a reduction in international student enrolment.

With British universities being so reputable within the industry worldwide, it is not surprising that they are set to suffer great losses this year. If none of the international places are taken up this year, Arts based universities are set to miss out on £125,866,210 worth of fee payments.*

The above map reflects the total losses in university fees, should 20% of international university students attend in the coming semester.

Unsurprisingly, London is the region the most affected by a lower intake of International university students. In normal circumstances, around 35,000 non-EU students are estimated to be attending London universities. Therefore the potential drop is also likely to be a financial hit to London businesses overall.

Research from the Higher Education Policy Institute revealed that international students in fact contribute £20 billion to the UK economy yearly, due to the additional expenses on top of their tuition fees.

Insights revealed that in London alone, £4.6 billion is contributed to the UK economy. This further highlights the blow that the dip in international students attending British universities is likely to have in the economy.

For those concerned about managing their spending habits when at university, you can start saving money today through exploring savings account options to help your money go further. Alternatively, you can search for a new current account to help manage your money when starting university life.

Analysing a list of all the Universities in the UK, we looked at the number of non-EU enrolments in comparison to the total number of enrolments for the 2019 academic year.

Following this we then used the Reddin survey of university tuition fees, and analysed the fee for undergraduate classroom fees.

Please note, in universities with a range of costs within their fees, the lower fee was used.

At Trinity Laban Conservatoire of Music and Dance, Glasgow School of Art, The Arts University Bournemouth, mixed fees were used.

Conservatoire for Dance and Drama, UK fees were used.