As the popularity of Buy Now Pay Later (BNPL) schemes increase, personal finance experts fear that young shoppers are being tempted into taking on unsustainable debt, without fully realising the risk.
Share this guide 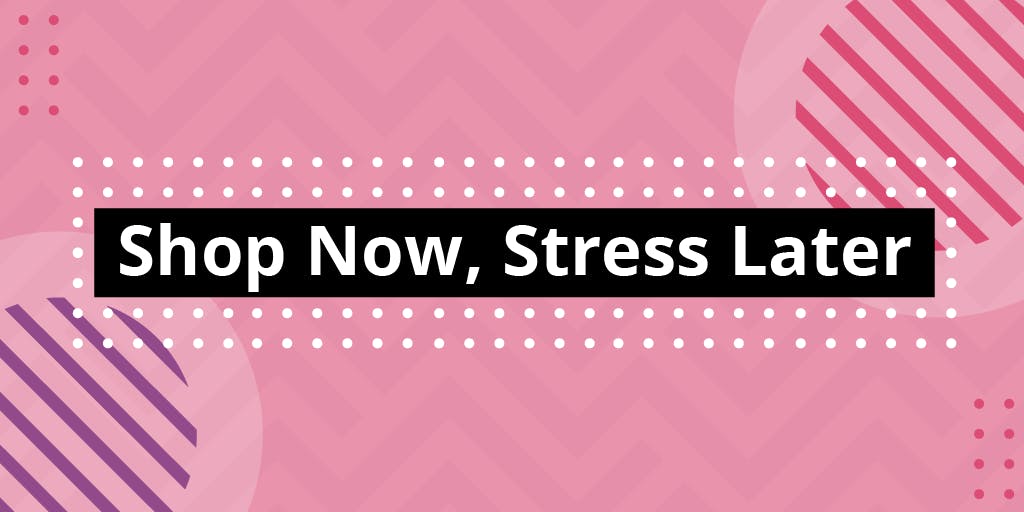 With Instagrammable pastel-hued marketing messages splashed all over online retailers such as ASOS, Missguided and Pretty Little Thing, highlighting the flexibility of the service alongside a promise of no added interest, fees or late charges, is it any wonder that young shoppers are tempted into borrowing?

Buy Now Pay Later platforms such as Klarna, Clearpay and Laybuy allow online shoppers to ‘try before they buy’ across hundreds of stores. Shoppers who are accepted have between 14 and 30 days to pay or return their items, without having to wait for the cash to be credited back.

In fact, one in five (20%) of the shoppers we surveyed admitted BNPL is a way to buy now, and worry about it later.

Consider a 0% purchases credit card that could save you money on purchases you make, by offering a long interest free period and low APR.

Is this ‘new way to pay’ enticing shoppers into a dangerous cycle of unmanageable debt?

We asked more than 2,000 consumers* to tell us about their experiences when using services such as Klarna, Clearpay and LayBuy, as well as exposing how online retailers in different sectors are marketing these services within the customer journey. 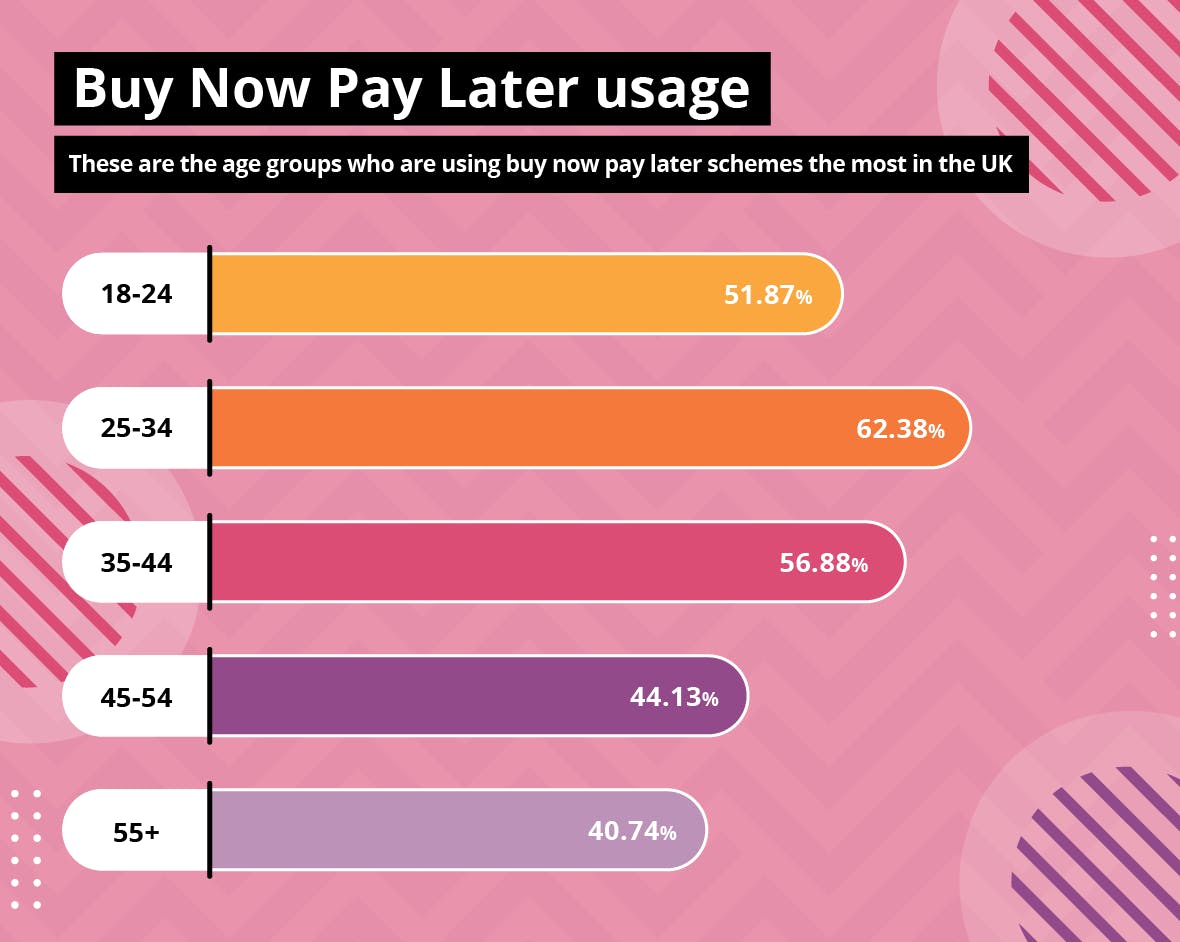 Consumers in the UK aged between 18-24 were found to be more than twice as likely to use a payment platform (52%) than going into their overdraft (20%), but it’s those aged between 25-34 who are the biggest BNPL users, with over two-thirds revealing they have used a payment scheme like Klarna, Clearpay or Laybuy.

We asked our respondents about the type of BNPL services they were using, and to estimate how much they owed. 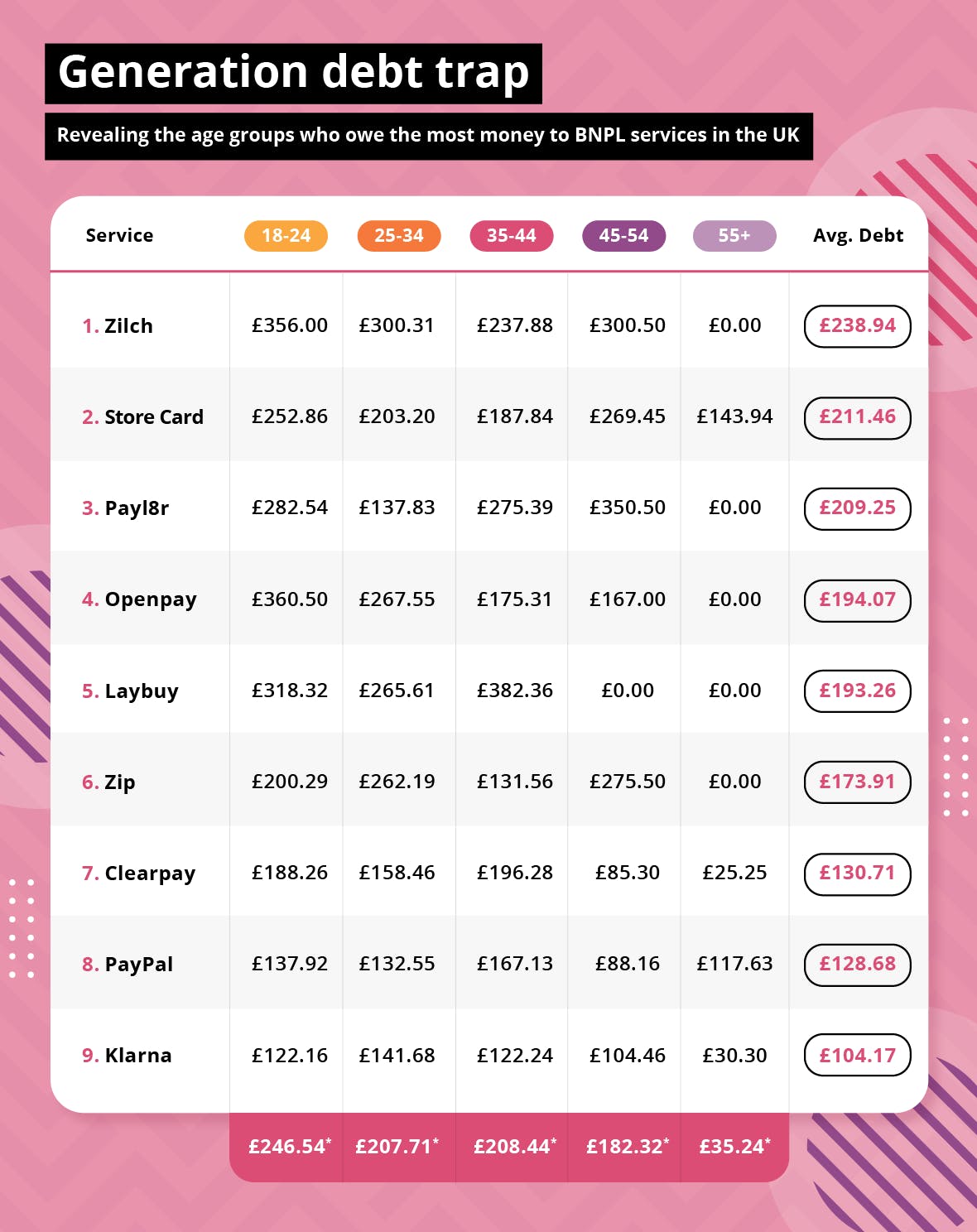 Men and women: who’s borrowing the most via BNPL? 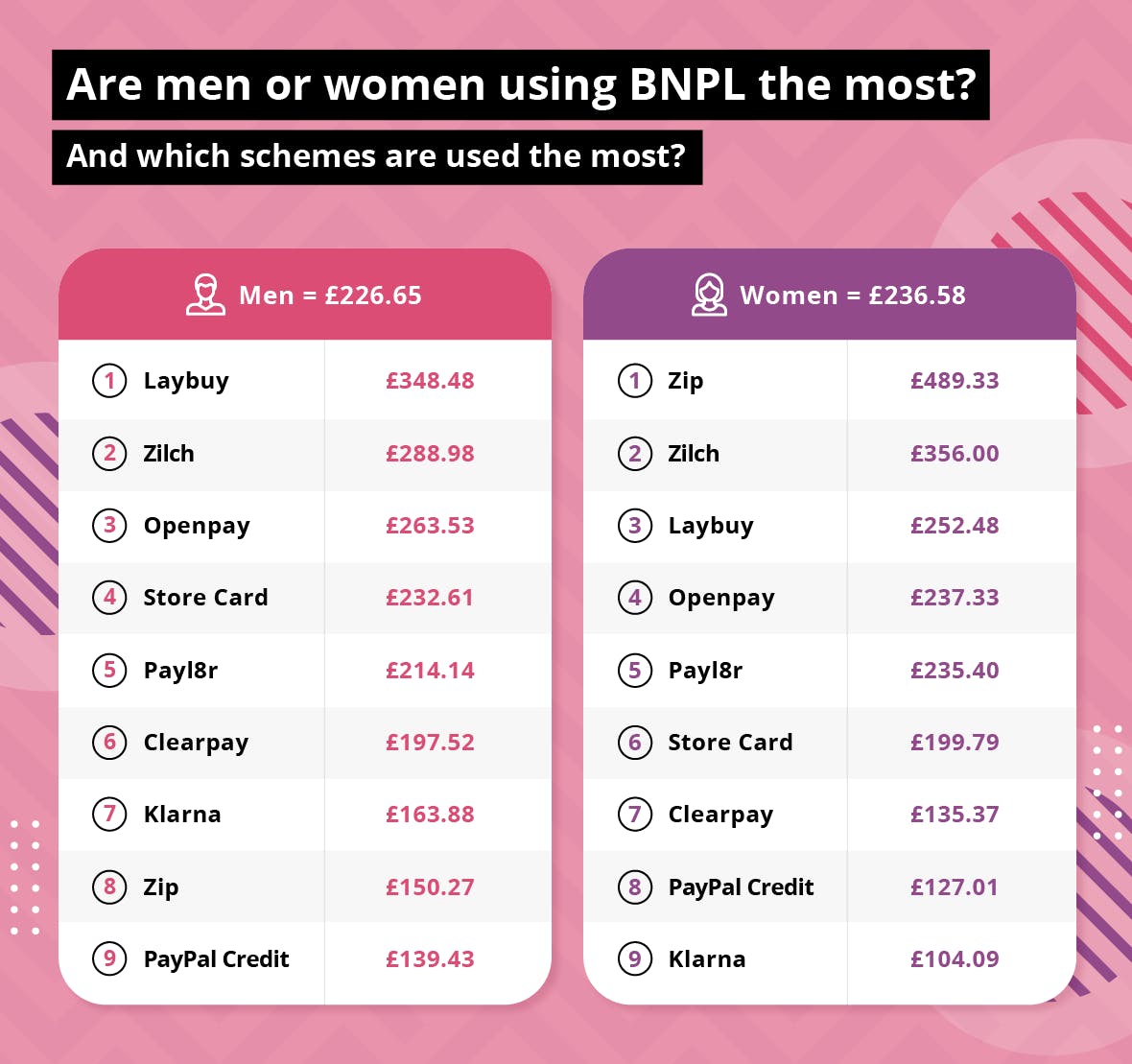 What are we using BNPL for the most? 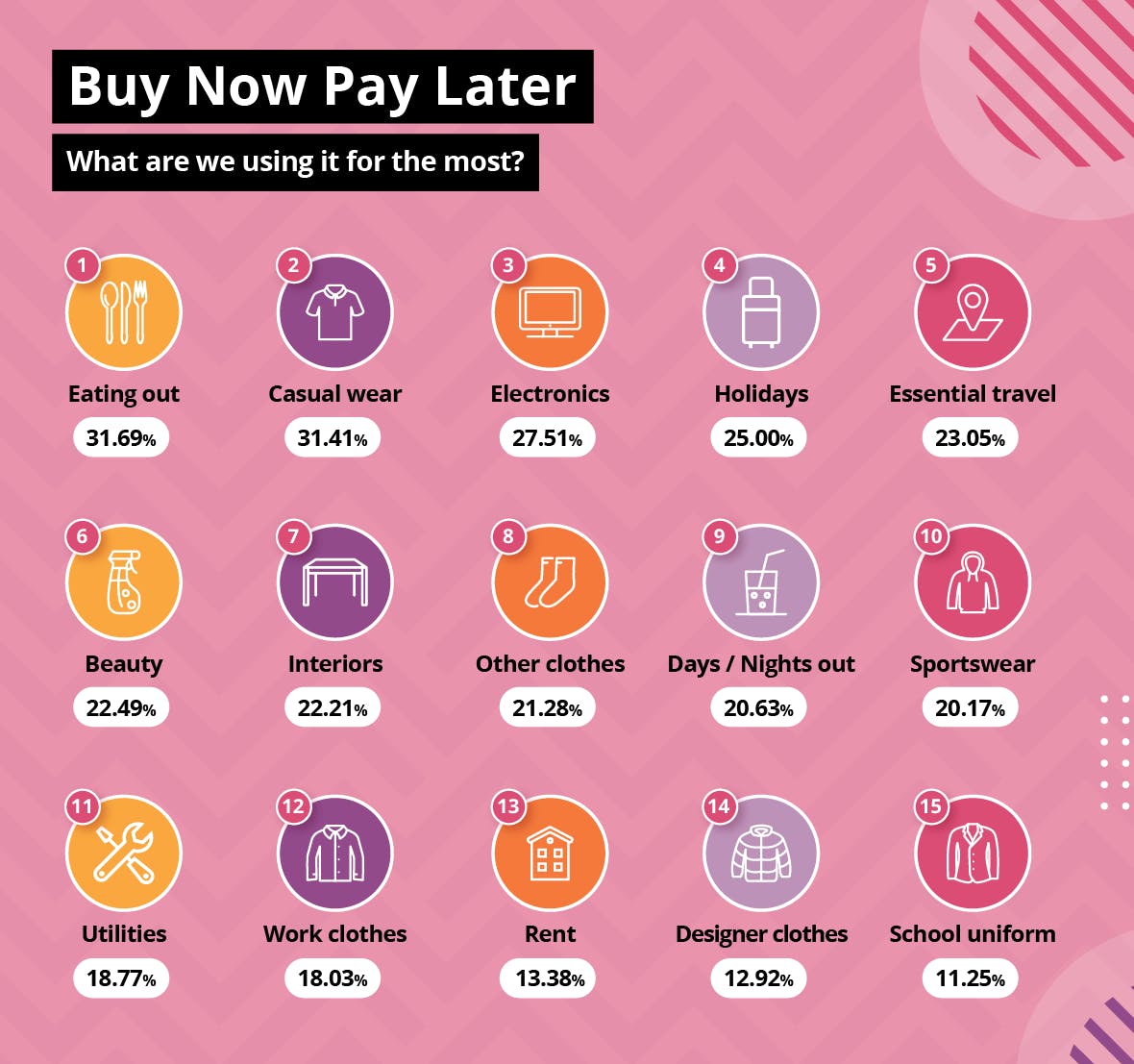 When asked what products or services they had used a BNPL service to make the purchase, over a third said eating out was their main spend, followed by clothing and electronics.

One in five of the shoppers we surveyed admit that they use BNPL to buy a lot of items and return them without the cash ever leaving their account. Millennial and Gen Z shoppers are the most prolific returners; two thirds (55%) aged between 18 and 34 admit to buying with the intention of returning.

When it comes to overspending, the study revealed that a fifth of the shoppers admit to spending more than what they can afford, which is dangerous as it could lead to a cycle of debt that they can not get out of.

The report suggests that not everyone can afford to pay on time. Per age group, we asked them to estimate the length of time (in months) needed to repay what they owe to buy now pay later brands. 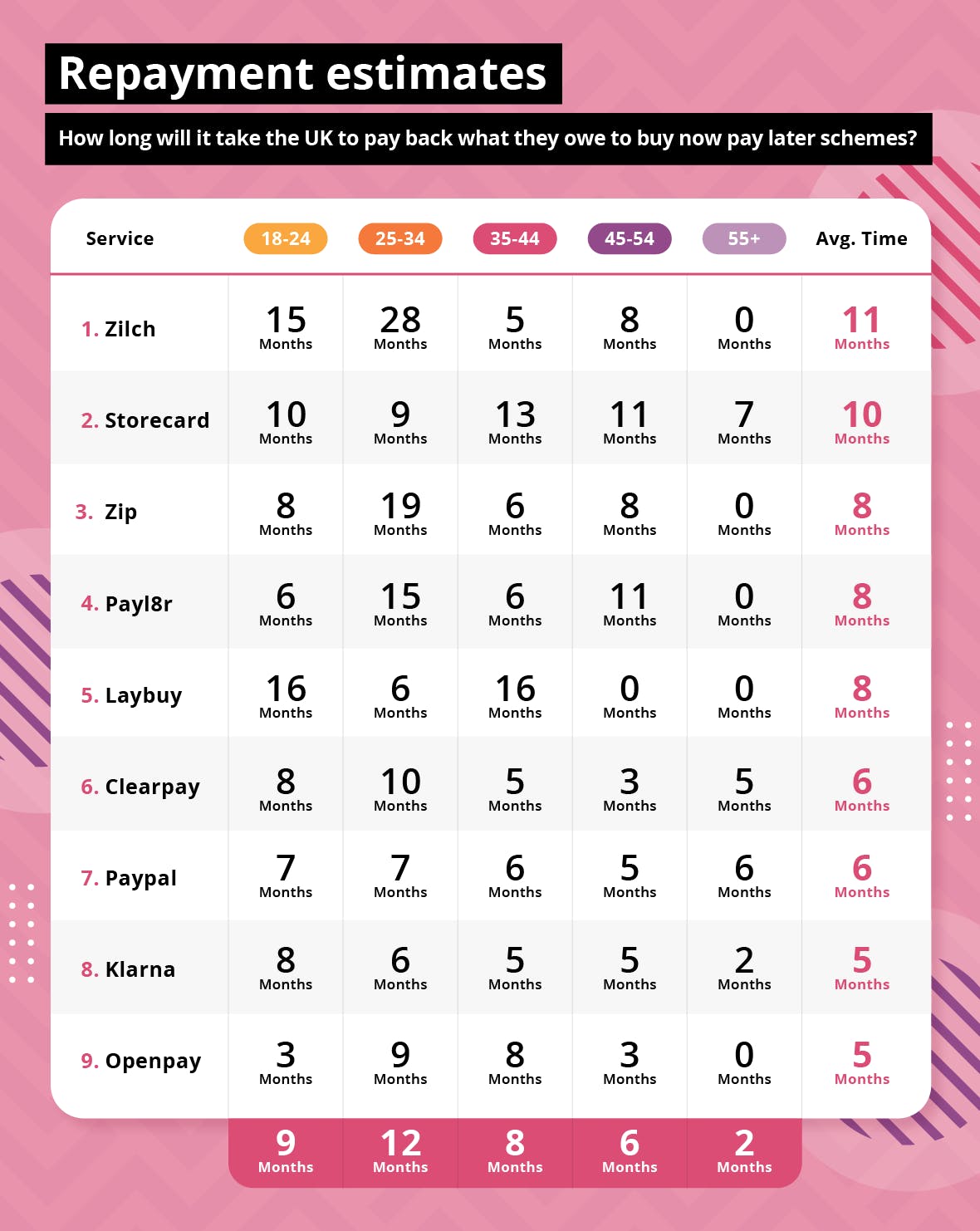 The average overall time taken to pay off a BNPL debt was around eight months. But those aged between 25-34 take the longest at 12 months. Klarna debt is estimated to take five months to pay back, Clearpay six months and Laybuy eight months.

Over a third of BNPL users (34%) stated that they felt confident in paying back what they owe on time, with a fifth (21%) stating the opposite.

When asked what attracted them to the Buy Now Pay Later service, almost a third cited social media as a contributing factor (29%) in their decision making.

Men revealed they were more likely to be persuaded by social media advertisements (10.42%) than women (7.65%). The study highlighted that these adverts are particularly effective on the youngest users in the study; 16% of 18-24 year olds stated that adverts were the primary attraction to a BNPL service.

Younger users aged between 18-24 are almost three times as likely to be wooed by an attractive social media profile (15%) compared to those aged 35-44 (5%).

Compared to older users, the 18-24 age bracket were more than twice as likely to be influenced by the profiles they follow on social media (10%) compared to 35-44 year olds (4%).

Klarna states that it can boost the average online store’s sales by 30% and the average spend by 34%**.

Taking a seed list of the of the UK’s most popular online retailers in the fashion, homeware and technology sectors*** we've scored their product and checkout pages based on the prominence given to brands such as Klarna, Clearpay and LayBuy to reveal which online retailers are pushing their BNPL offering the most****. 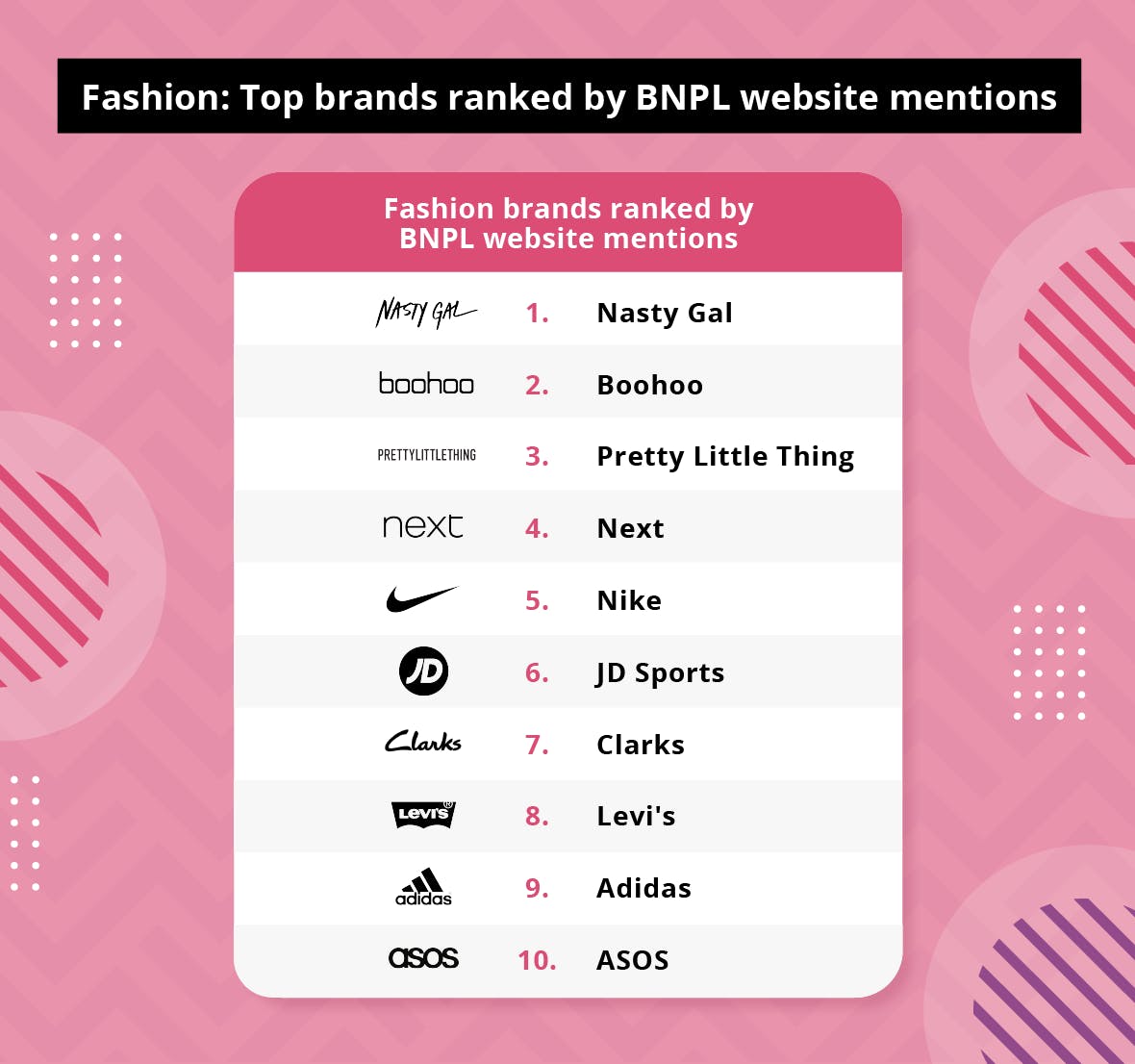 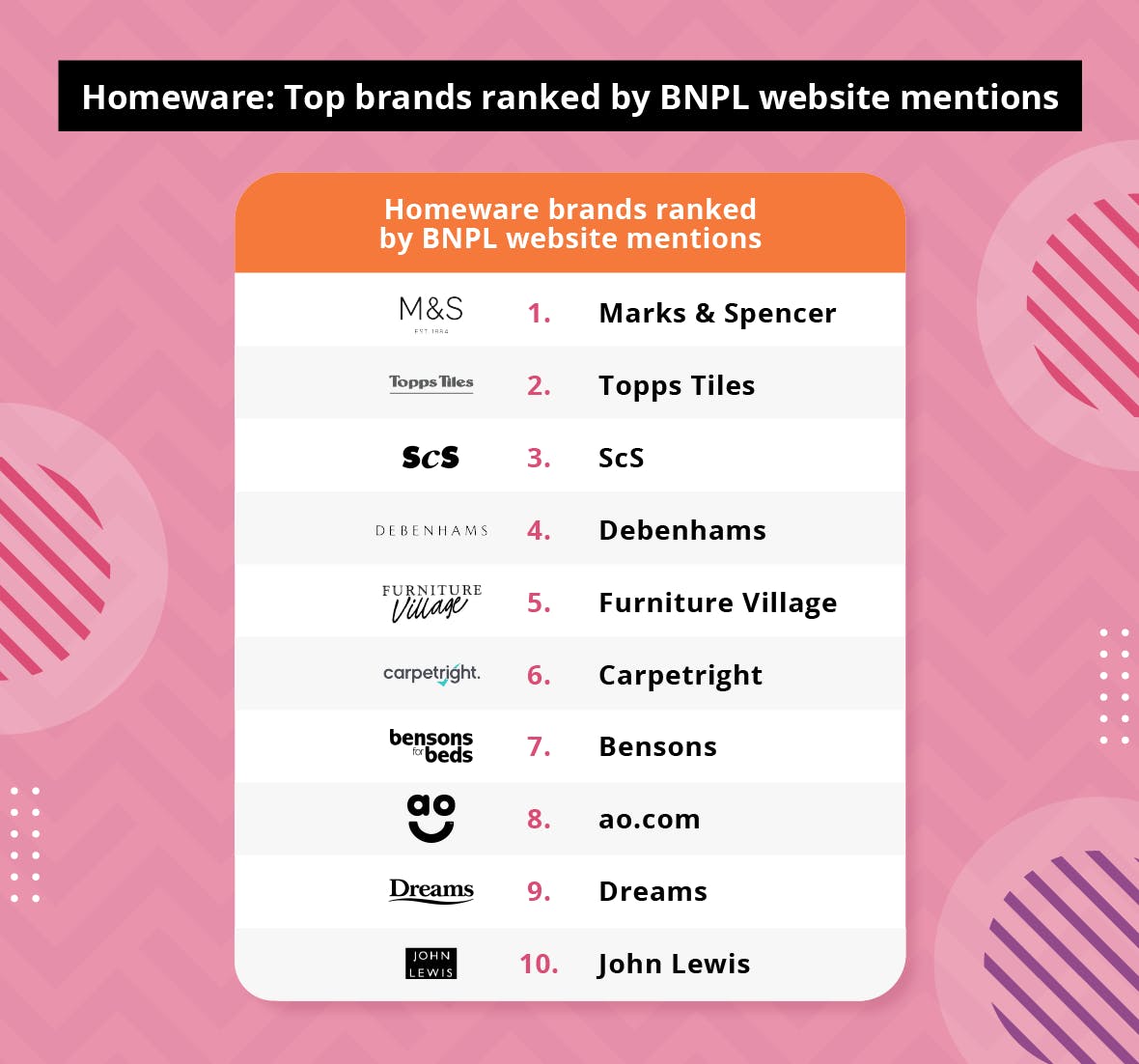 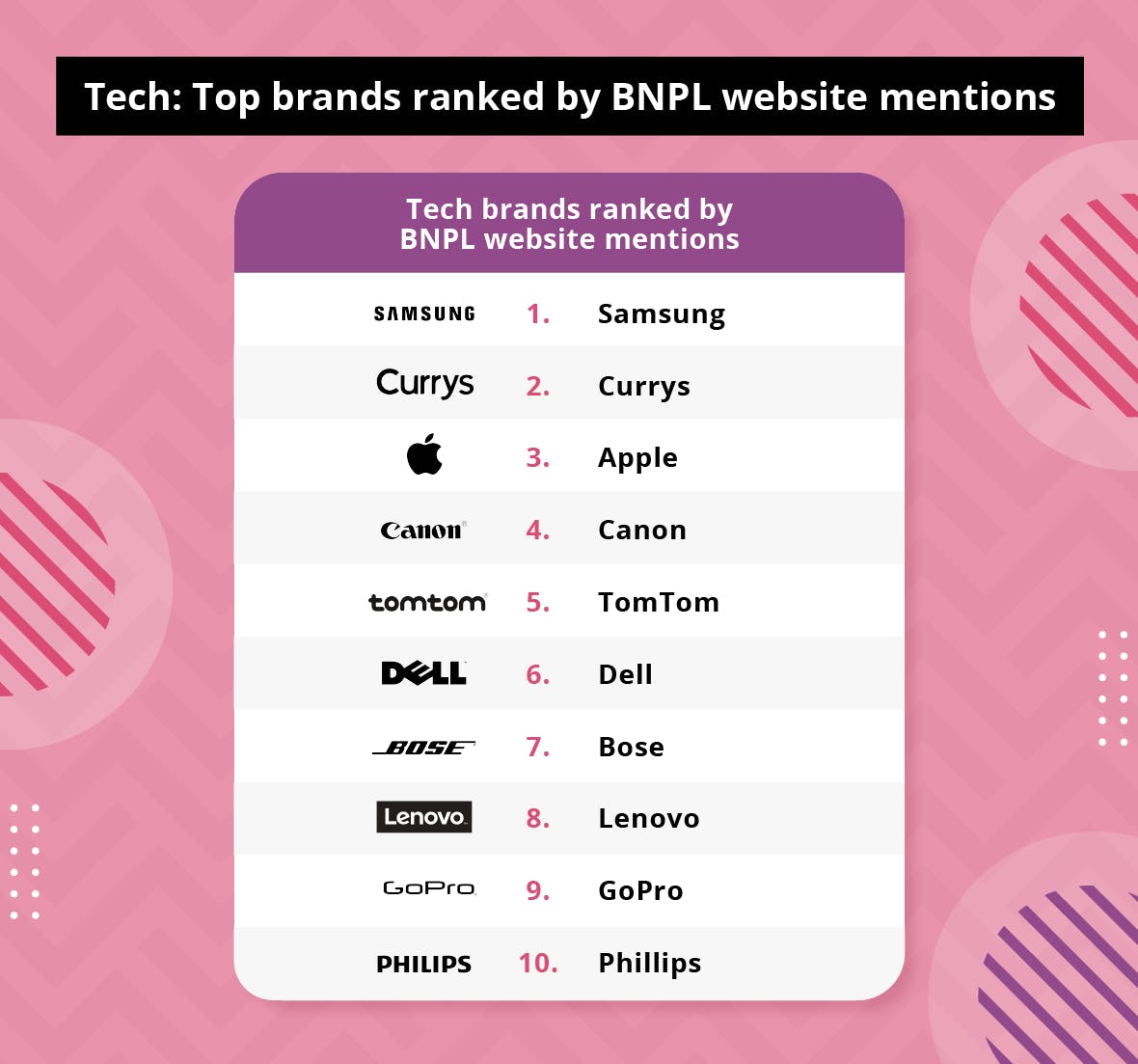 These are the 10 UK’s cities who admit that Instagram has influenced their borrowing: 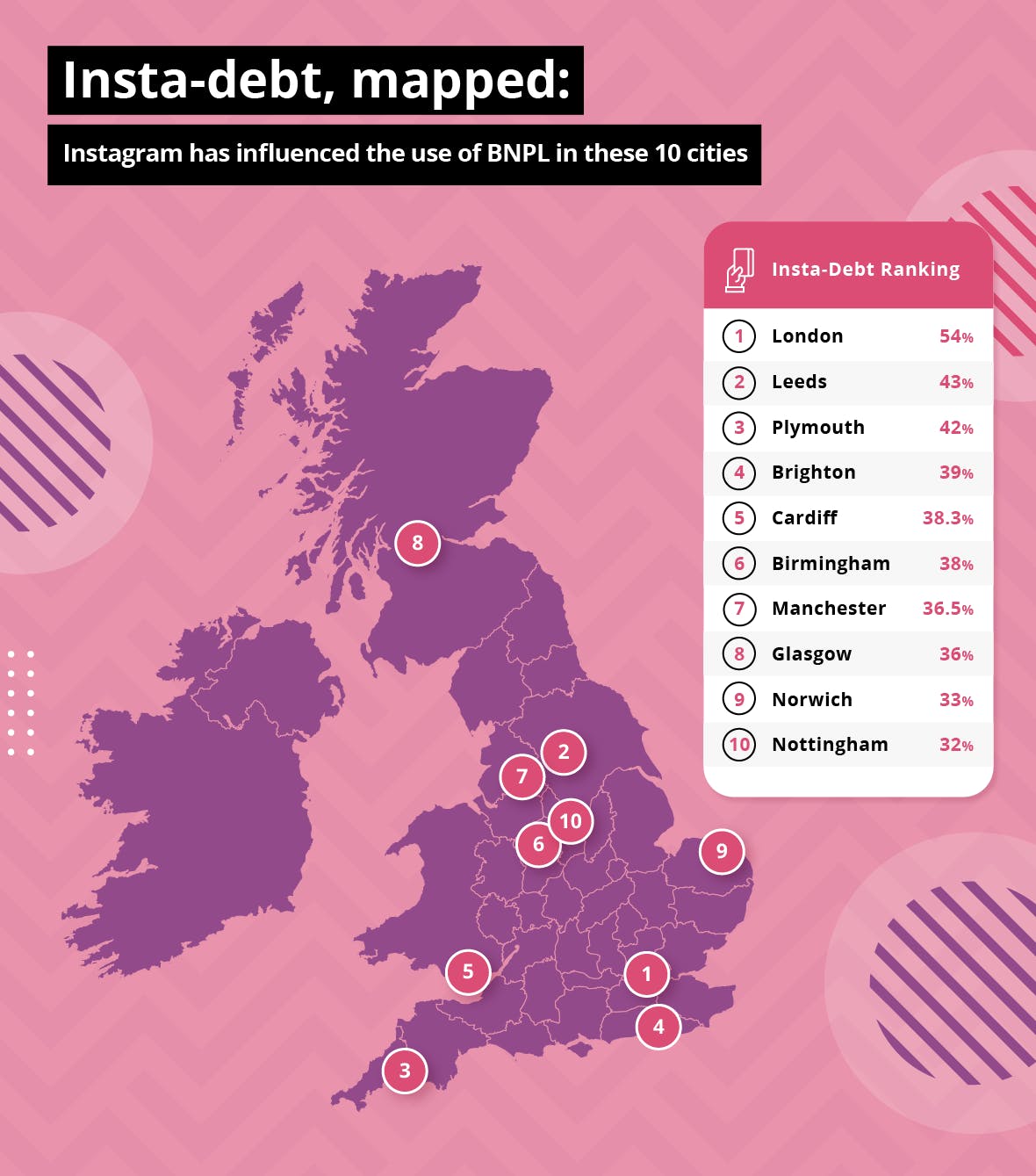 Good value for money or a good way to get into debt?

Almost half of the survey respondents (47%) felt that Buy Now Pay Later was either good value for money, or a positive thing to do for their finances.

Younger respondents were twice as likely to believe that services like Klarna and Clearpay are good value for money (51%), compared to those in the 45-54 age bracket (20%). This could indicate a lack of financial education or experience when it comes to applying for lines of credit.

Salman Haqqi, personal finance expert at money.co.uk said: “While Buy Now Pay Later schemes, like Zilch, Klarna and Clearpay, are quick and easy to join and seemingly harmless, they are in fact an entry point to debt for many.

“Their quick and easy sign up process, minimal credit check and youthful marketing appeal could be causing shoppers to sign up and spend more than they can afford without understanding the full risk.

“When taking on any sort of debt, it is important that you understand the risks in full otherwise you could end up in a cycle of debt that you can’t get out of. Our recent study shows that those who use Buy Now Pay Later services tend to overspend or purchase more than they otherwise would, as they have the option of breaking the payment into smaller chunks.

“Customers should note all of the terms and conditions and understand completely what they are signing up for to ensure that they are using the service correctly. For shoppers who are confident they can handle the repayments then it might not be a problem, but this is not always the case and there will be those who may not be able to pay off what they spend, and this puts them at risk.

When it comes to the marketing and branding of these services Salman added:

“Social media is one of the primary channels used by these payment platforms, using language and branding that appeals to a younger audience, and this is reflected in the results of the study.

“The Klarna website states that 44 per cent of users would have abandoned their purchase if Klarna wasn't available, which is an attractive offer to retailers struggling with lower in-store footfall and dealing with the highly competitive world of online shopping, but at what cost for the consumer?

“Before taking out any form of credit you must ensure you can meet the minimum payment requirements and avoid paying interest where possible. If you are struggling with debt there are free advice services available, such as StepChange, the UK's leading debt charity, which you can contact to get expert debt advice and fee-free debt management to help you tackle your debts.”

If you are planning to borrow money to finance your shopping, you could consider a credit card. If you want to spread the cost of your spending, you may want to consider a 0% purchase credit card.

Alternatively, if you already have credit card debt, you could transfer your debt to a 0% balance transfer card.

It is worth noting that credit cards require regular repayments and can accrue interest if you do not pay back the full amount.

Get some independent, impartial advice from StepChange

StepChange is a charity providing advice and help on budget and debt management.

They have a helpline which provides free and independent advice.
www.stepchange.org 0800 138 1111

*Survey of 2,016 UK respondents aged 18-55 about their buy now pay later service usage during August 2020 on behalf of money.co.uk.

****Taking seed list of the UK’s most popular brands from YouGov*** in the following three categories: Fashion, Technology, and Homewares, we then analysed the homepage, product pages and checkout pages for each brand to reveal how many mentions of BNPL services there were. The higher the number of mentions, the higher the brand scored on the BNPL index ranking.

The scoring criteria are: