Most popular dates to get married

One of the many unfortunate side effects of the coronavirus pandemic has been that a huge number of couples have sadly had to cancel their wedding plans. This has led to more weddings than ever before in 2022, but which dates are the most popular?
Share this guide

There's a huge backlog of couples hoping to get married this year after cancelled plans, so if you’re looking to get hitched in the near future and are wondering how much competition you might face for venues and suppliers on your preferred date, our wedding finance experts have looked into the most popular wedding dates to help you decide which to go for.

You can also use our new Wedding Budget and Date Setting tool to work out how long it will take you to save up for your dream day, and hence when is the closest date you can afford to get married.

If you’re in need of a little extra cash to make sure everything is just right for your big day, be sure to compare personal loans at money.co.uk.

The most popular wedding days 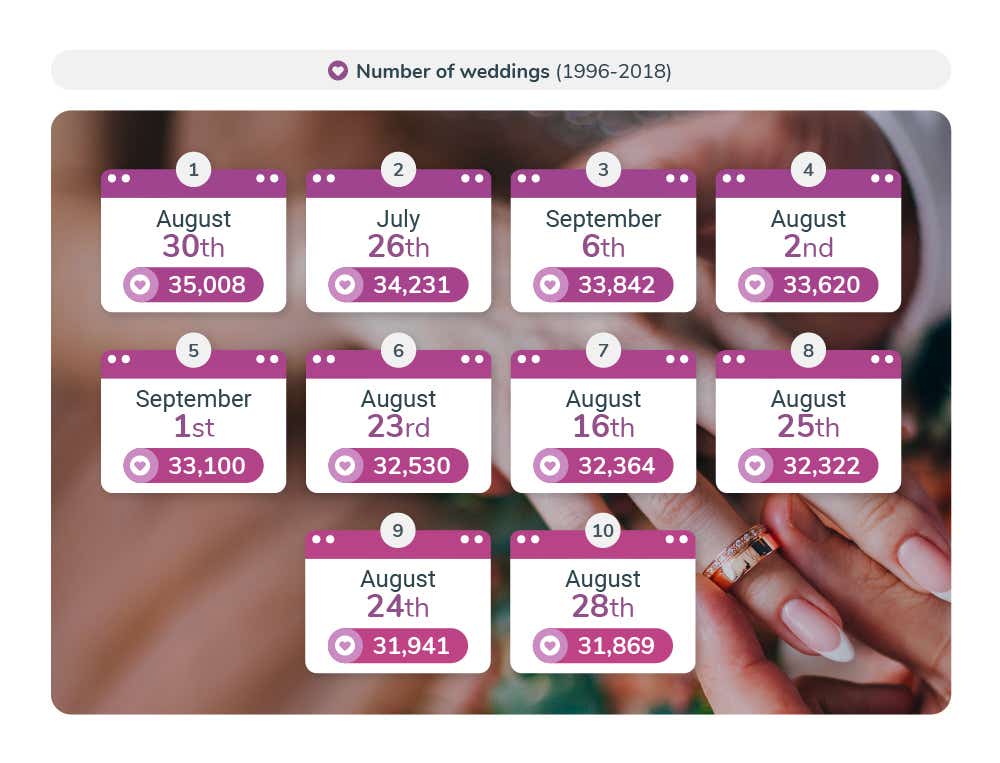 The most popular wedding day since 1996 has traditionally been August 30th, with just over 35,000 couples getting married on this date.

August, in general, is a popular month for couples, with a good chance of nice weather and in the middle of the school holidays.

But August 30th sees a particularly high number of weddings, largely due to the fact that it often falls on the Summer bank holiday.

The second most popular wedding day is July 26th, with over 34,000 weddings taking place on this date since 1996.

Of course, this is another date that falls right at the height of summer so it makes sense that couples might earmark it as a potential date for their nuptials.

The most popular wedding day that doesn’t fall during the summer months is September 6th, with 33,842 weddings on this date.

If you’re after an Autumnal wedding but still want a chance of some late summer sunshine, then an early September wedding could be a good choice, with venues and suppliers likely to be a little quieter than during the summer. 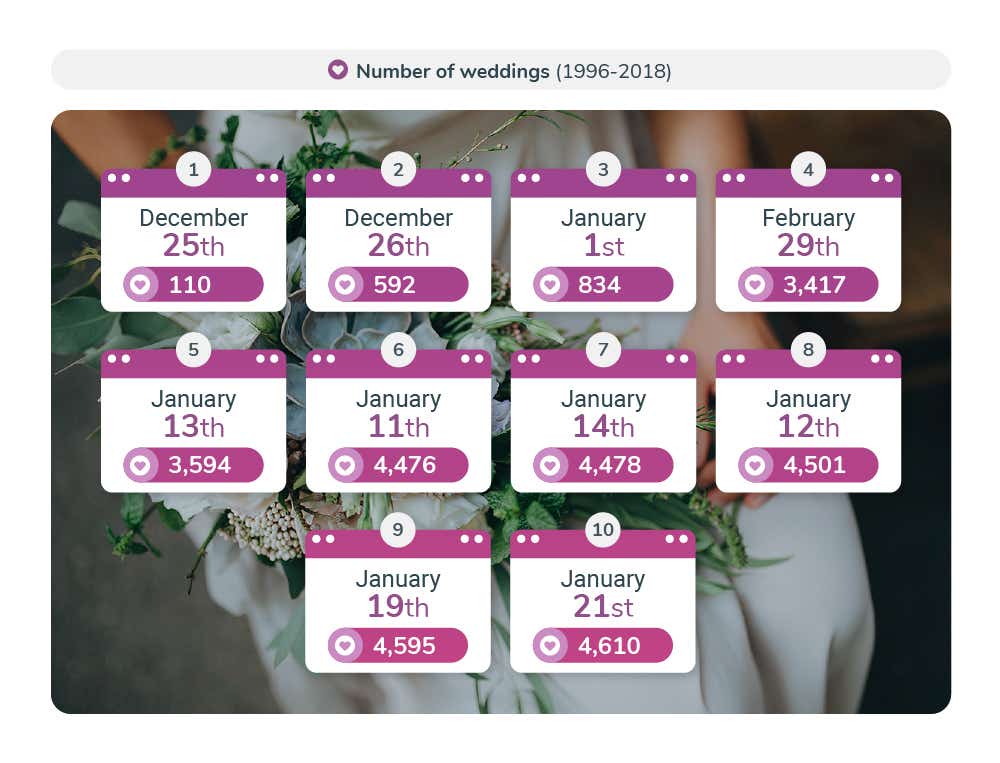 While the idea of tying the knot on Christmas Day might seem like a magical idea, very few people have ever actually got married on the big day itself.

While getting hitched on Christmas Day is a nice idea, the reality is that venues (especially churches) are unlikely to be open. You may also struggle to convince guests to ditch their usual family plans!

Unsurprisingly, Boxing Day is also a day that sees very few weddings, although slightly more people do get married on this date than Christmas Day, with 592 doing so.

Again, there are likely to be issues with venues and suppliers here, with many being shut on Boxing Day.

Similarly, New Year's Day is another big holiday, and just 834 people have got married on January 1st since 1996.

Not only could you face stiff competition for venues and suppliers, with few working on this date, but you may also have a few guests with sore heads from the night before too!

The most common days to get married 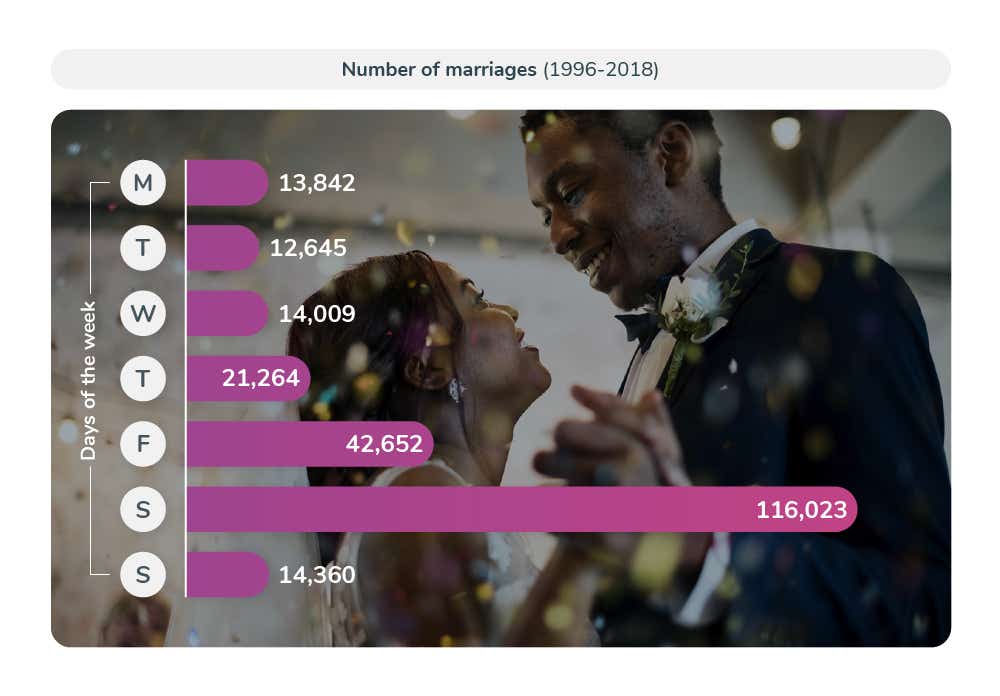 By far the most popular wedding day of the week is Saturday, with Saturday ceremonies accounting for just under half of all weddings.

It makes sense that weekend ceremonies are the most popular, with weddings on a Friday proving to be the second most popular wedding day, with over 42,000 since 1996.

On the other hand, midweek days such as Tuesday and Monday are far less popular, with guests having to reschedule things such as work to be able to attend.

The most common months to get married 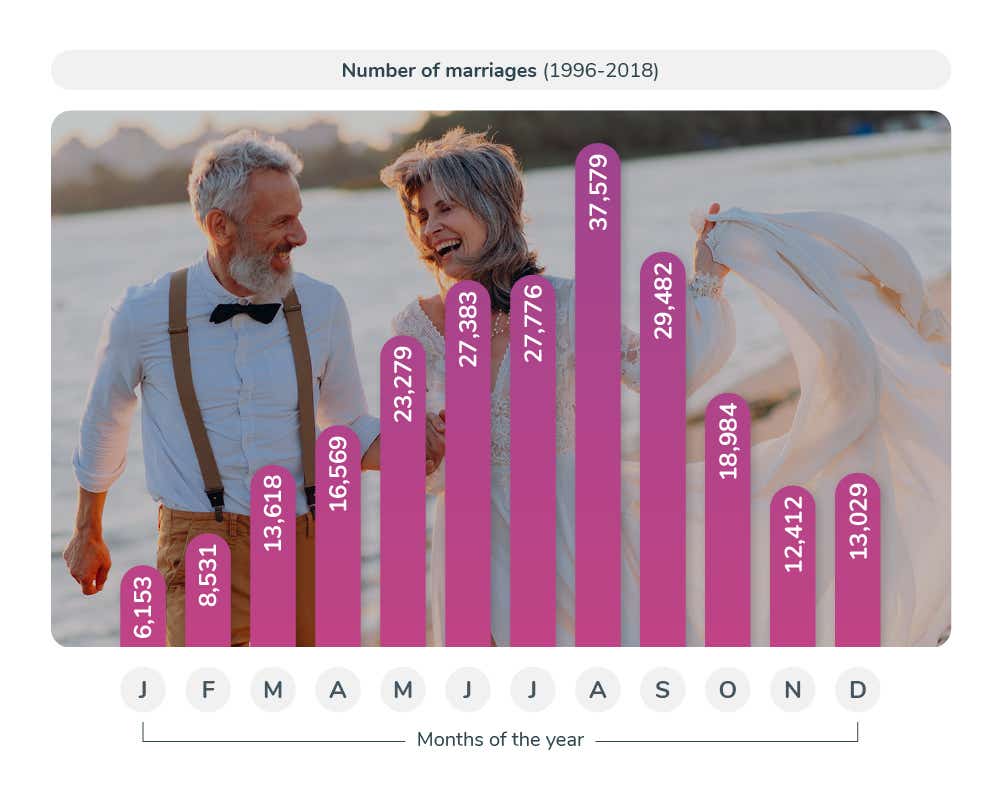 With the obvious weather advantages that summer brings, August is the most common times for couples to tie the knot, with over 37,000 ceremonies since 1996.

However, a non-summer month takes second place, with just under 30,000 September weddings.

The most popular hen do destinations

Before the big day itself, the hen do is a great excuse for a party and for guests of the bride to meet up and get to know each other.

But where are the destinations that hens love visiting the most? To find out here’s a look at the most searched hen do destinations on Google, both here in the UK and further afield.

Most popular UK hen do destinations 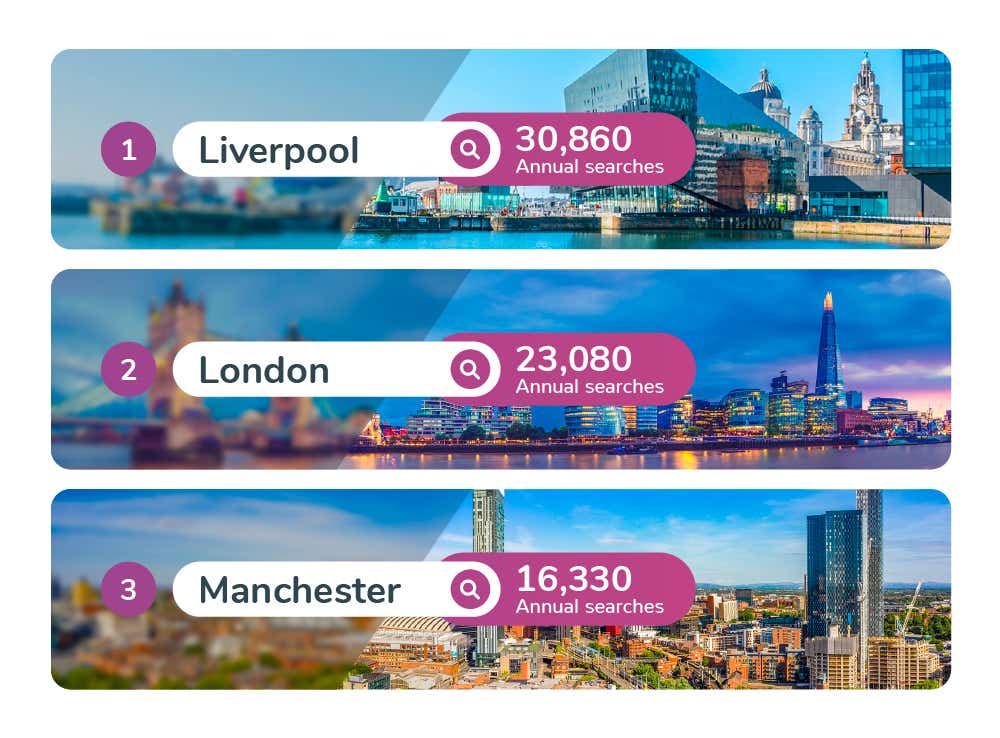 Taking the top spot is for the most popular hen do destination in the UK is Liverpool, with over 30,000 searches in the last year.

Liverpool is a great city known for its history, culture and most importantly for a good hen do, its nightlife!

Being the capital city, with a huge selection of things to do, you might expect London to be the most popular hen do location in the country, but it misses out on first place on this occasion!

Regardless, London is a great place to enjoy your hen weekend, with so much to offer, with endless bars, restaurants, and activities to discover.

Another city in the North West completes the top three, with searches for hen dos in Manchester totalling over 16,000 in the last year.

Manchester is a great party city and the ideal place to give the hen the send-off that she deserves!

Most popular overseas hen do destinations 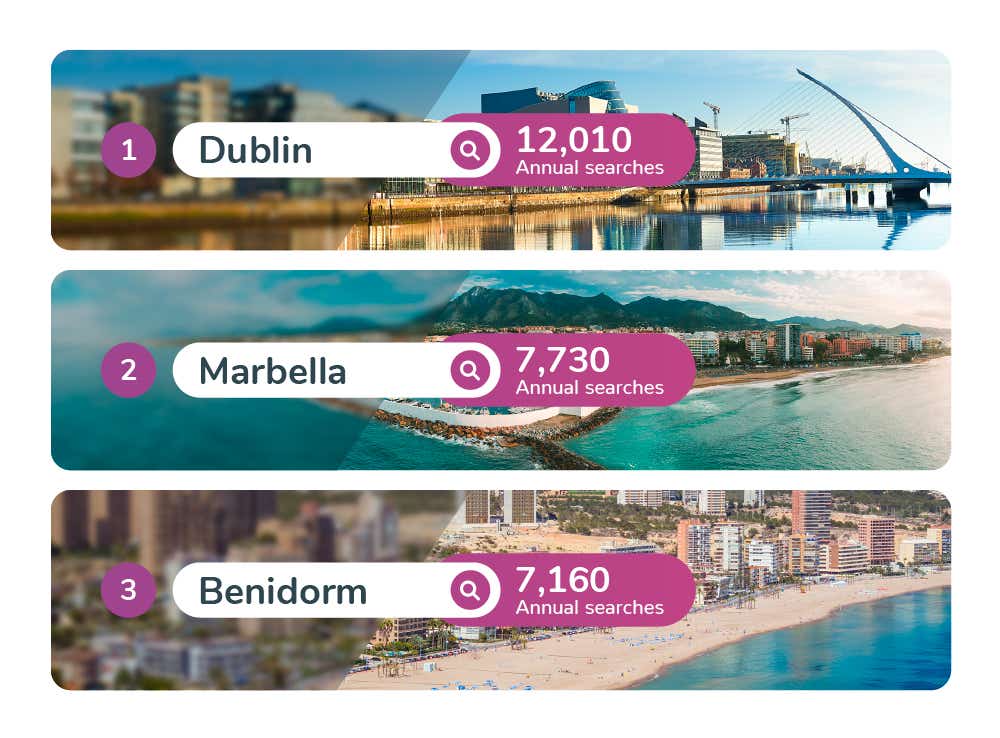 While it’s not exactly on the other side of the world, Dublin proves to be the most popular overseas destination for hens, with over 12,000 annual searches.

Dublin is a hen’s paradise, with an incredible nightlife scene, whether you’re after a sophisticated weekend away or something a little rowdier.

In second place is Marbella, on Spain’s Costa del Sol. If you’re looking for a weekend away in the sun for your hen do then you can do a lot worse than Marbs, with its enviable weather right through the year.

Marbella received over 7,000 searches for hen dos and hen-related activities in the last twelve months.

Benidorm is a classic cheap and cheerful destination where you’re guaranteed to have a good time for the hen’s final weekend of single life!

August as a whole is a popular time to get married, but this particular date often falls on a bank holiday weekend, which is likely why it is the most popular. There’s also the fact that you’re more likely to have good weather for the big day!

While there isn’t official data to confirm the most popular time of day for a wedding, the majority of couples do tend to get married between 11am and 1pm.

Of course, this can be different for different couples, and there are no rules as to when you should tie the knot.

For example, many opt to get married in the evening, or perhaps as the sun is setting.

Choosing a date to get married isn’t an easy task, with lots of factors to take into account such as guests’ availability, the cost, and the weather.

Unfortunately, your budget is probably going to be the main thing to consider and you may be forced into choosing one of the cheaper months, such as between October and April.

Other than this, note down any major family birthdays, anniversaries, or other events and make sure that you don’t clash with them.

Finally, while trying to predict the weather can be a fool’s errand, it's best to try and give some consideration to how the seasons could impact upon the comfort of you and your guests.

Amongst the first wedding tasks you’ll have to do is to send reminders to save the date of your big day, followed by formal invitations.

The above advice applies if you’re getting married in your local area, but things are slightly different for a destination wedding.

If you’re traveling quite far to tie the knot, you should probably send the save the dates closer to nine months to a year before the wedding itself.

If possible, you should give people as much time to prepare as possible and send the save the dates as soon as things such as the venue are booked and confirmed.

Save the dates and wedding invitations are both important parts of the wedding planning process.

And while they’re very similar, they’re not the same thing. A save the date card is intended to give guests notice of the wedding, but an invitation formally invites them to the wedding.

The content is largely similar although an invitation will include extra information such as an RSVP card, as well as menu options to be returned.

Whether you just got engaged or are in the midst of planning a wedding, check out our guides below for advice and guidance on how to have the on-trend, wedding of your dreams on a budget! 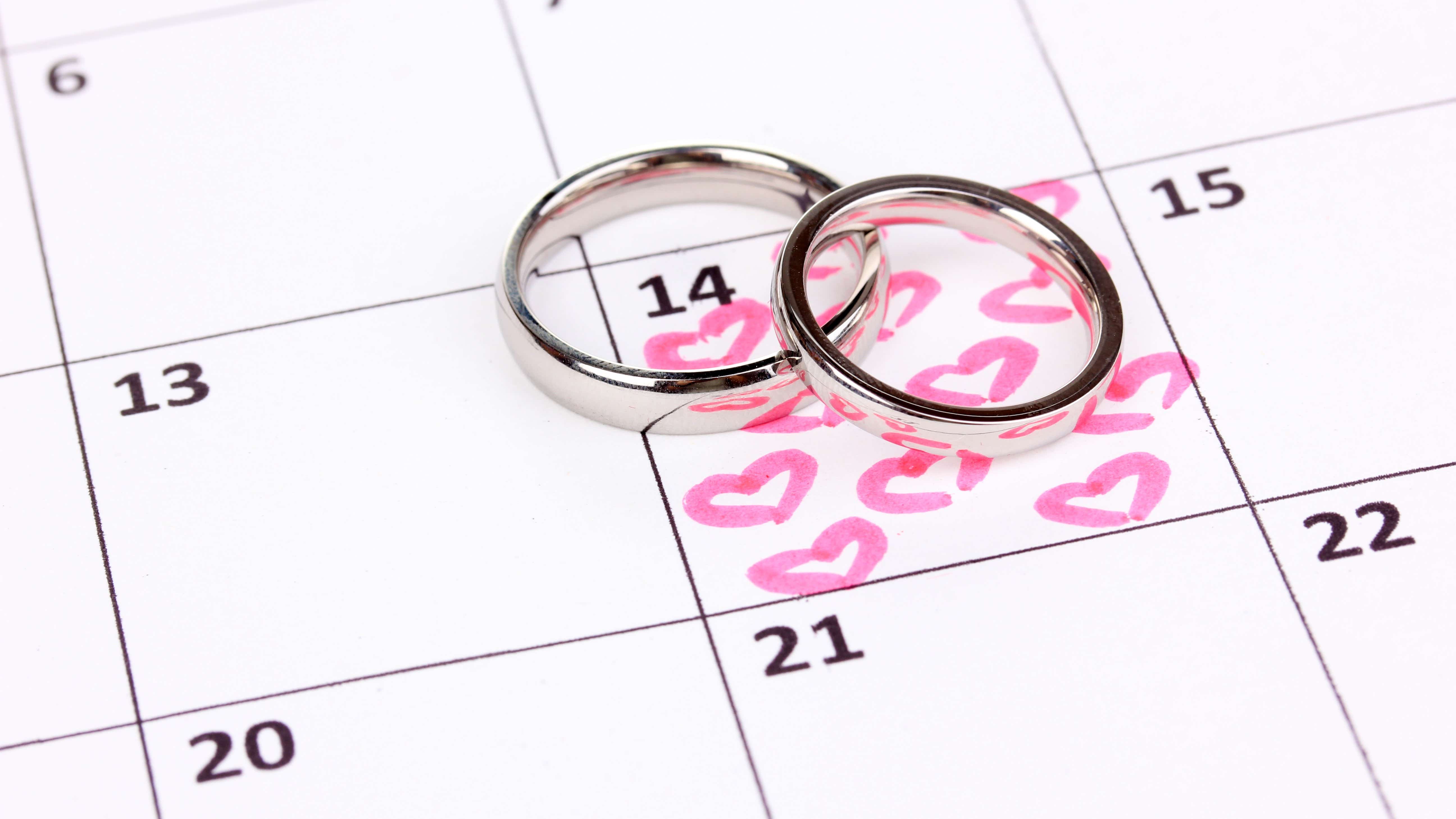 The best month to get married

You’re engaged and starting to plan your wedding but will it be in June or January? We look at how to pick the best time of year to get married.

How to set your date 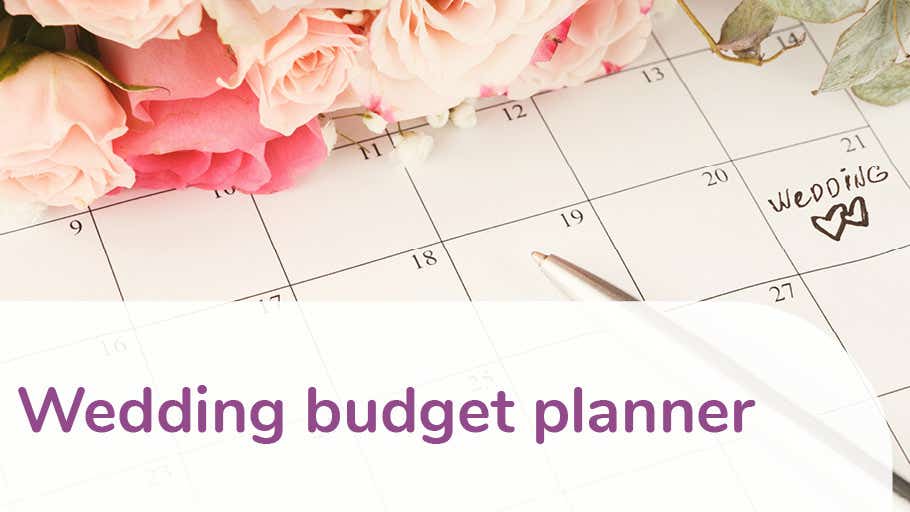 One of the first things to think about when planning a wedding is your wedding budget and how much you can afford to spend, ahead of setting the wedding date. 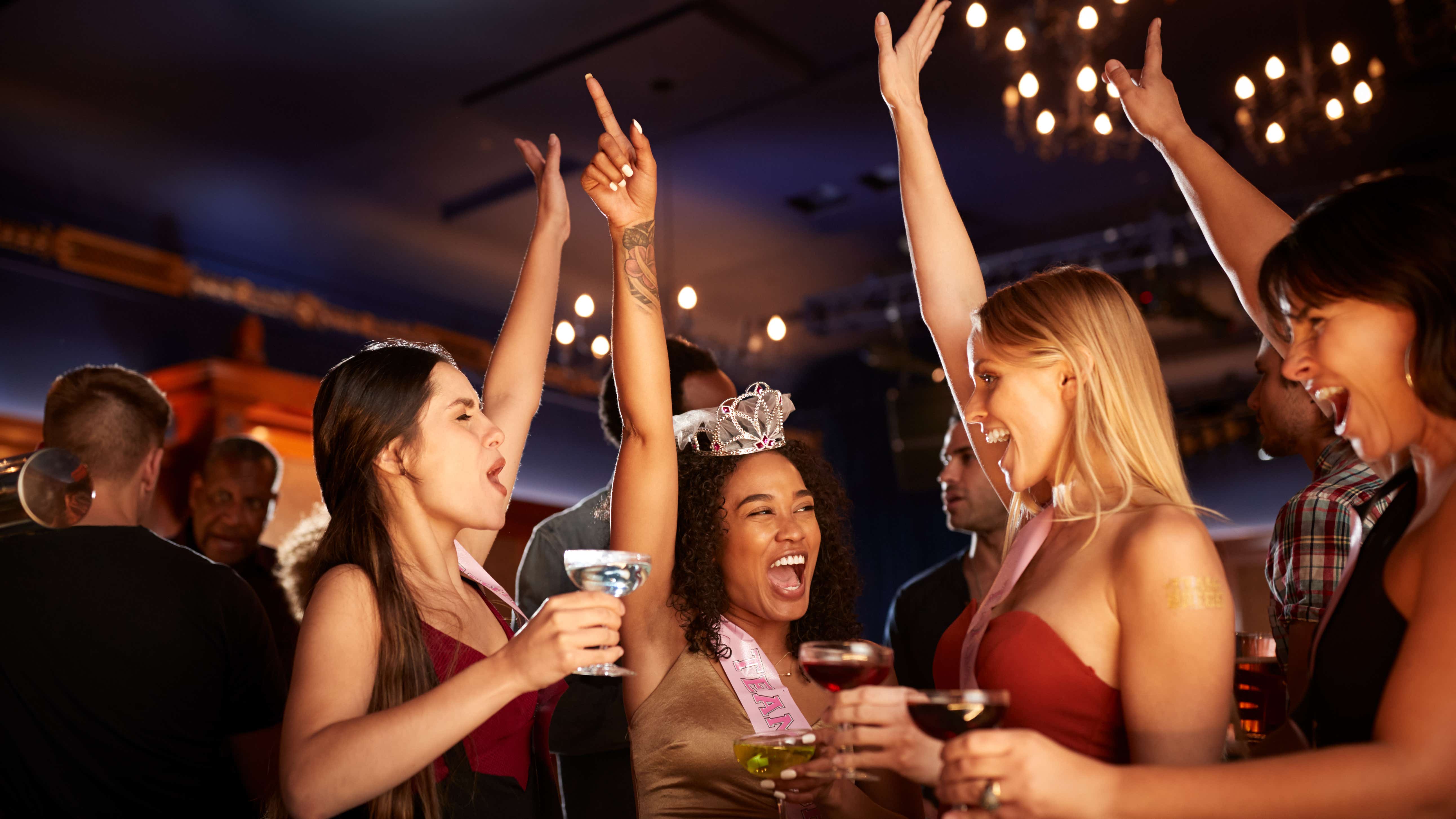 Cheap hen do and stag do ideas

Weddings are back and that means hen and stags are too, but what are the best stag do locations and who pays for the hen do? We look at everything you need to know to plan a brilliant but budget-friendly celebration. 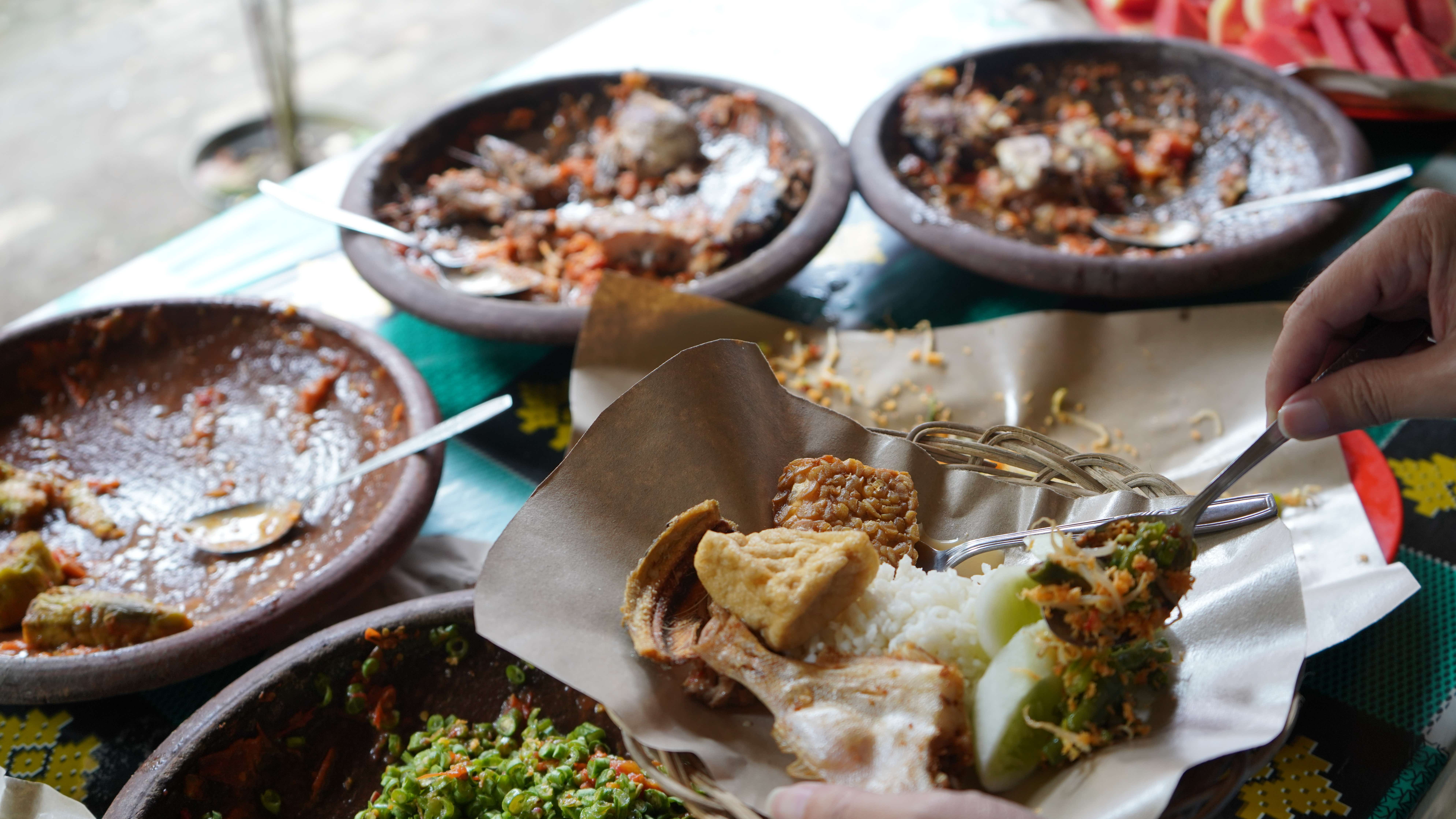 Weddings on a budget - tips and tricks

Whether you are looking for a big, traditional wedding or a small and intimate ceremony, it is important to work out how much you can afford in advance. We look at budget wedding ideas and how to have a wonderful Big Day without breaking the bank.

Where you can save cash 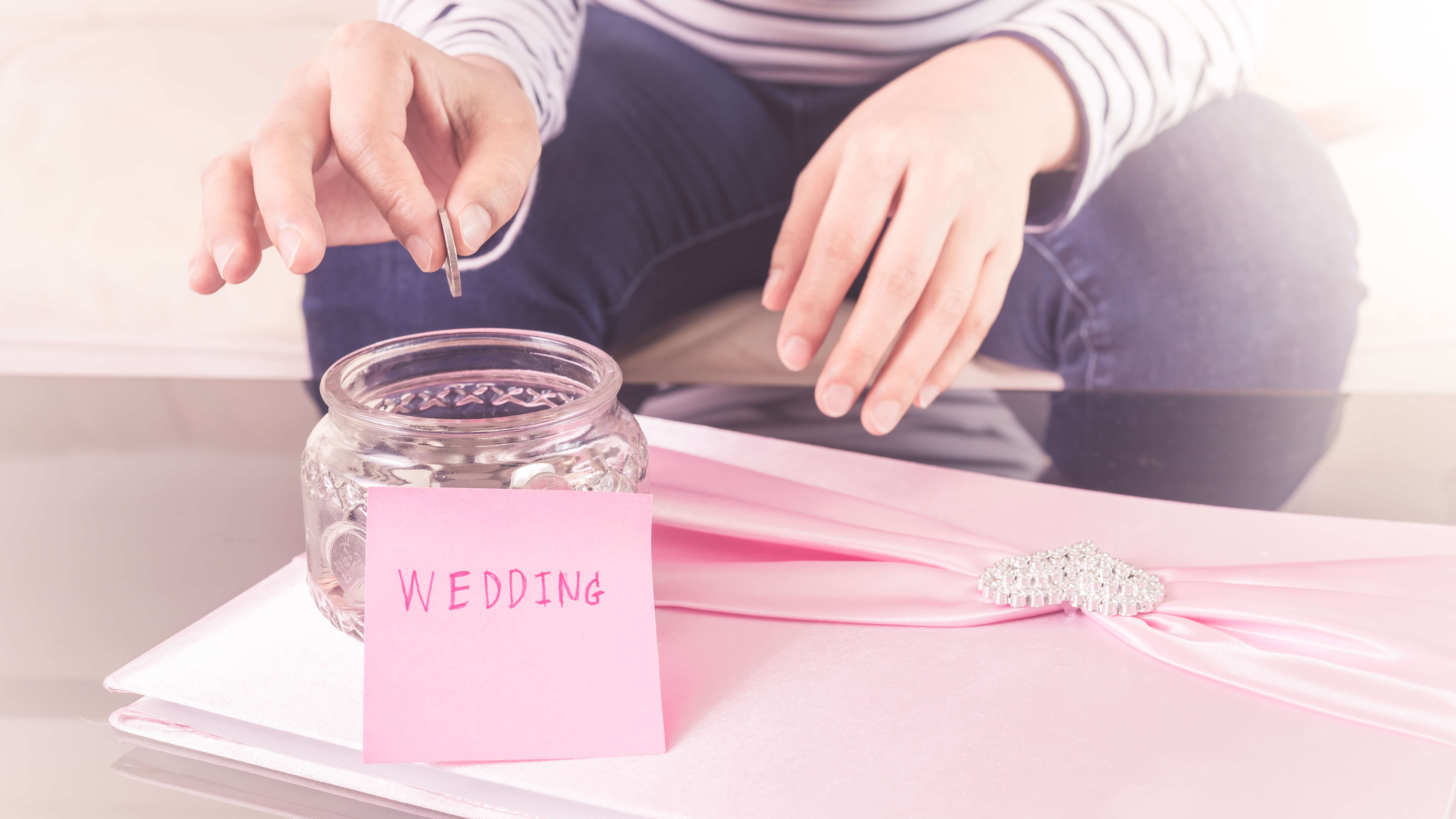 How to save for a wedding

From the dress and suits to the canapes and cake, weddings are an expensive business and no matter what you have planned you’ll need a savings plan to pay for it.

Where to put your cash 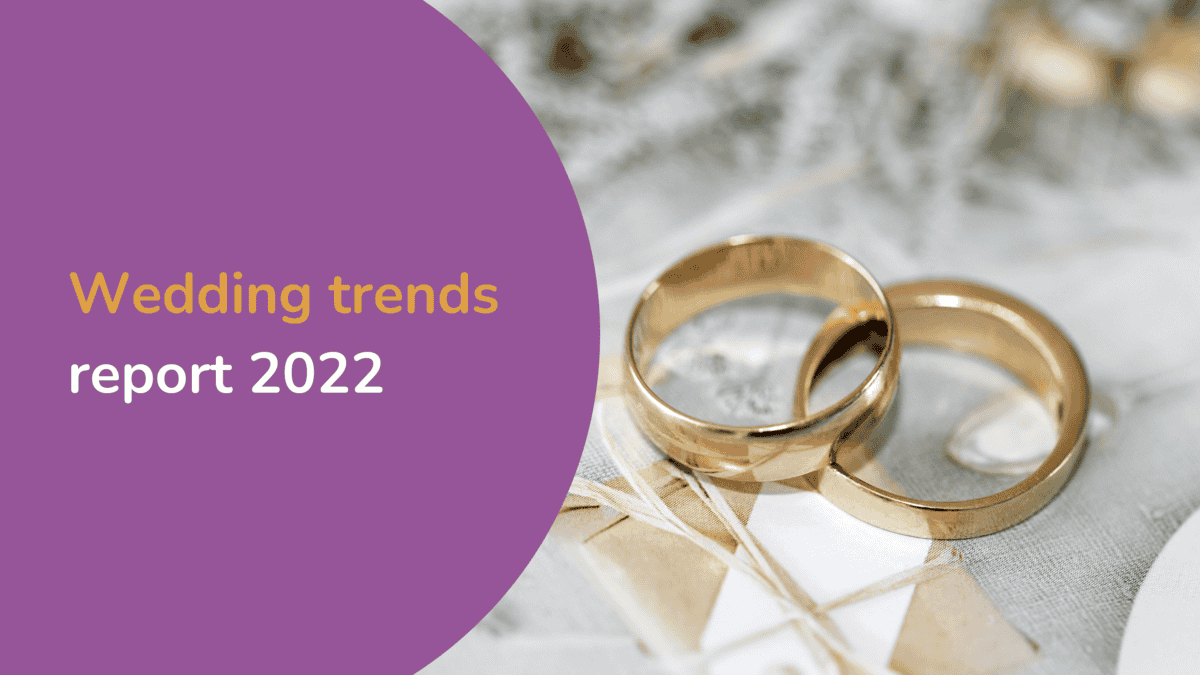 We have delved into Google search volumes to reveal the top wedding trends for the season ahead.

All data on the most popular dates to get married were sourced from the Office for National Statistics data on Marriages in England and Wales and refers just to legal marriage ceremonies that took place on those dates, with all data covering 1996 to 2018.

To reveal the most popular hen do destinations, a list of popular destinations was created using articles and hen do planning websites.

From here, Google Ads Keyword Planner was used to find the number of global searches made for the following keywords in the last twelve months, before a total of all three keywords was taken for each destination: