Is Mayfair the most expensive area on the Monopoly board to buy a house in real life? 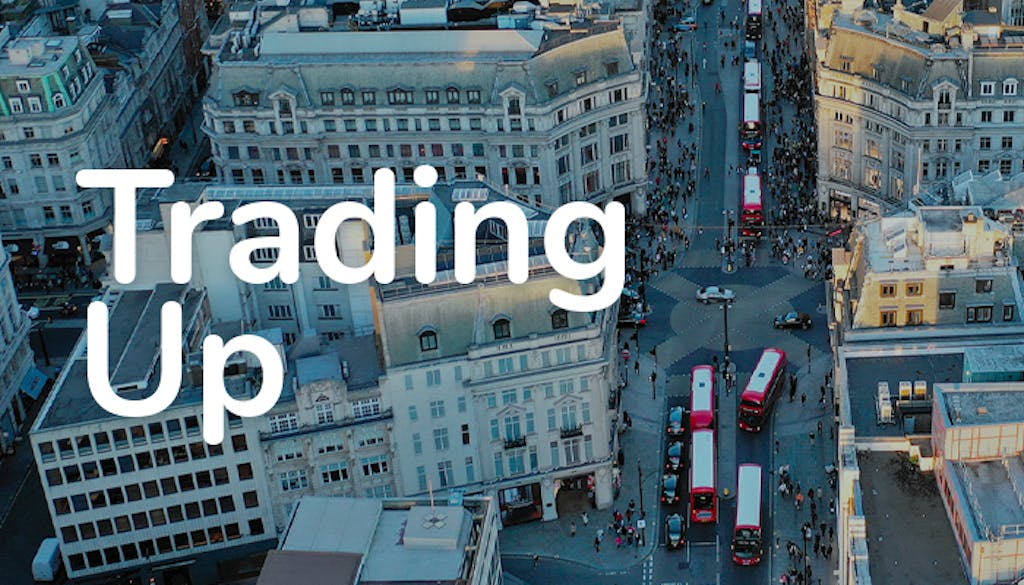 Since its inception in 1935, the Monopoly board game has sold more than 275 million copies, has been translated into 47 languages and played in 114 countries. The strategic property purchasing and trading game is a staple in British popular culture and has been the cause of many a family argument!

Despite there being hundreds of variants to the original classic Monopoly board, including Disney, the Simpsons and Super Mario to name a few, the 1936 London version is the most iconic here in the UK. As one of the most expensive regions to purchase a home in the UK and one of the hardest to get a mortgage in as a result of this, London properties can be sold for millions depending on the borough.

But how much does it cost to live on the 22 London streets that feature on the Monopoly board in 2021 and is Mayfair really the most expensive area to purchase property?

Considering purchasing a property in London? You may want to compare mortgages. 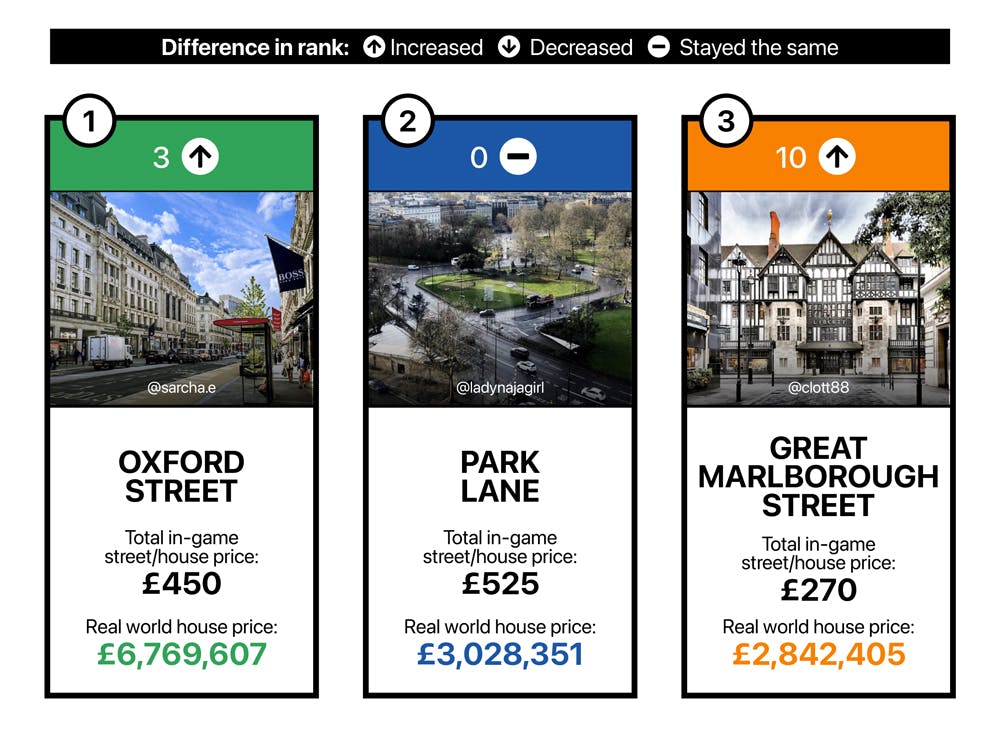 Taking the second spot is Mayfair’s board companion Park Lane, where houses cost an average of £3m in the real world. Great Marlborough Street comes in third, climbing an incredible 14 places when ranked against how much the squares cost on the Monopoly board, with a current value of £2.8m.

Today, homes on 14 of the 22 Monopoly squares (64%) sell for an average of £1m or higher, and four of these for between £2m and £7m. Back to the start of the board, Old Kent Road keeps its place as one of the cheapest streets both on the board and in real life, with homes selling for £396k right now.

Here’s how the Monopoly board’s streets should be ranked today: 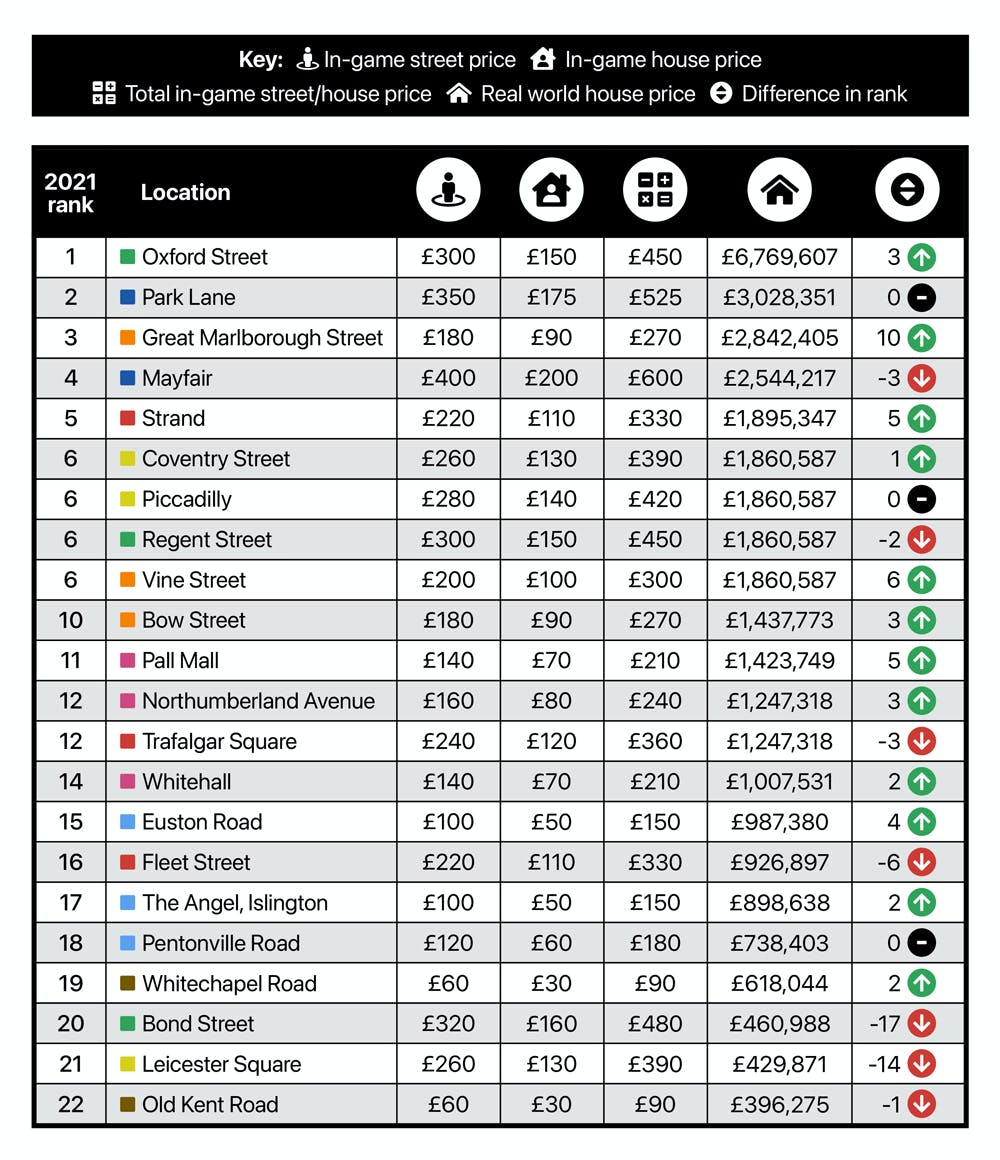 So just how much more expensive are the real-world Monopoly streets compared to their equivalents on the board?

At the very top end of the scale, properties on Oxford Street are worth a whopping 1,504,257% more than they are on the Monopoly board, while the street which has seen the smallest increase still saw prices 95,939% more expensive, with the street and house cost for Bond Street is priced at £480 in the game and £460,988 in real life. 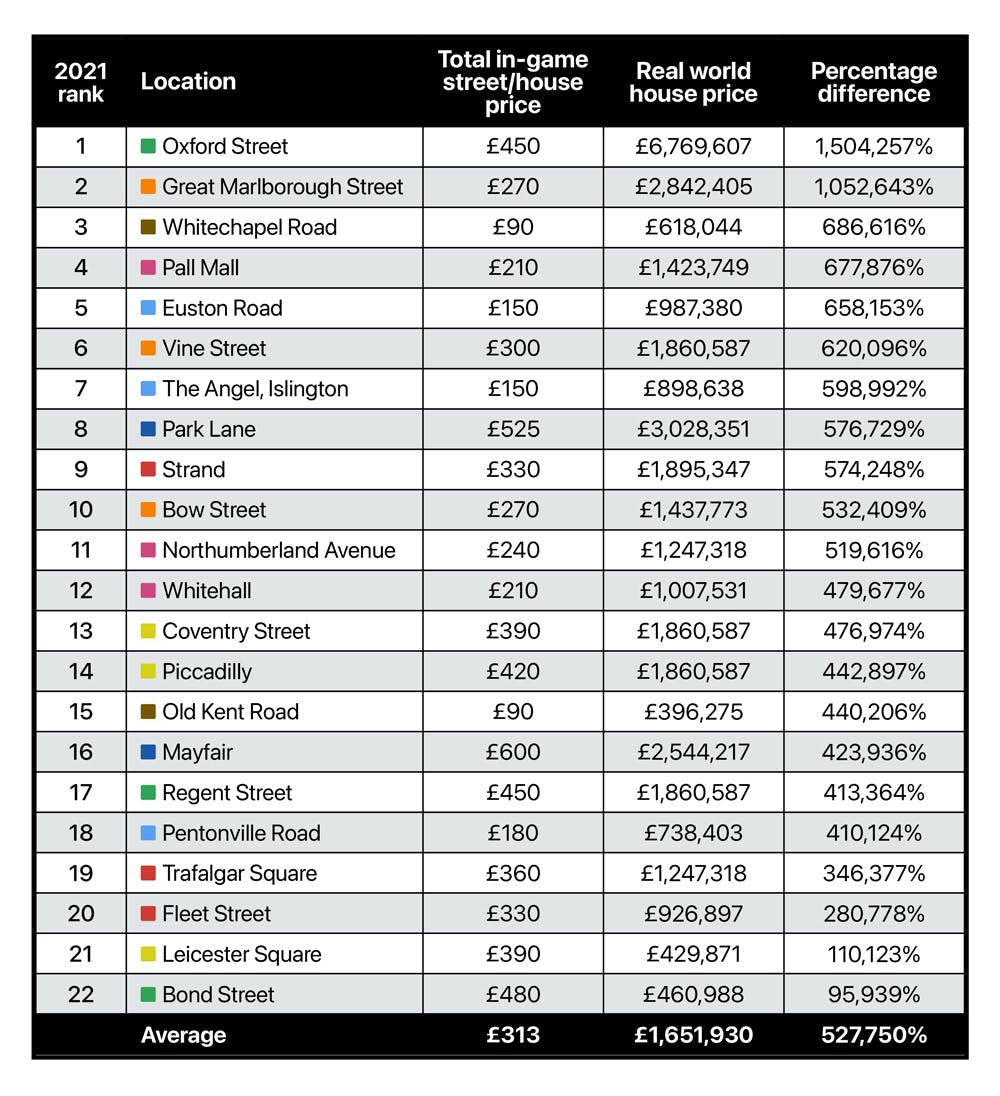 This content is not endorsed by or created in collaboration with Hasbro Gaming.

Using the original 1935 London Monopoly board, we used Zoopla to find out the current average value of a house in each of the locations in the real world that are featured on the board.

In the majority of cases, the squares on the board relate to a real-life street in London, with a couple of exceptions.

For train stations, we used the street that the station is located on or the wider “King’s Cross” area in the case of King’s Cross Station.

The only other square on the board which doesn’t relate to a specific street is the Angel, Islington, which is a historic building and in this instance, we took the house price for the wider “Angel” area which it gave its name.

*All house prices are correct as of 14th June 2021, according to Zoopla.