Technological innovation is at the heart of most modern cities and as the sector seemingly grows bigger every day, it’s also fast becoming one of the biggest employers around the world too.
Share this guide

In the UK alone, it’s estimated that tech employment stands at around 2.5 million and accounts for 7.6% of the total workforce, while tech hubs such as London regularly draw people looking to work in the sector.

So if you need to compare mortgages ahead of a potential career relocation, where are the most tech-savvy cities globally?

To find out, the experts at money.co.uk have compared a number of global tech cities on factors such as tech job earnings, the number of successful startups to come from the city and the pedigree of local universities when it comes to the subject.

Interestingly, each of the top six cities and eight out of the top ten were all located in the United States, with North American cities topping the rankings for all five factors, with the USA long being a leader in technological innovation.

The world’s most tech-savvy cities 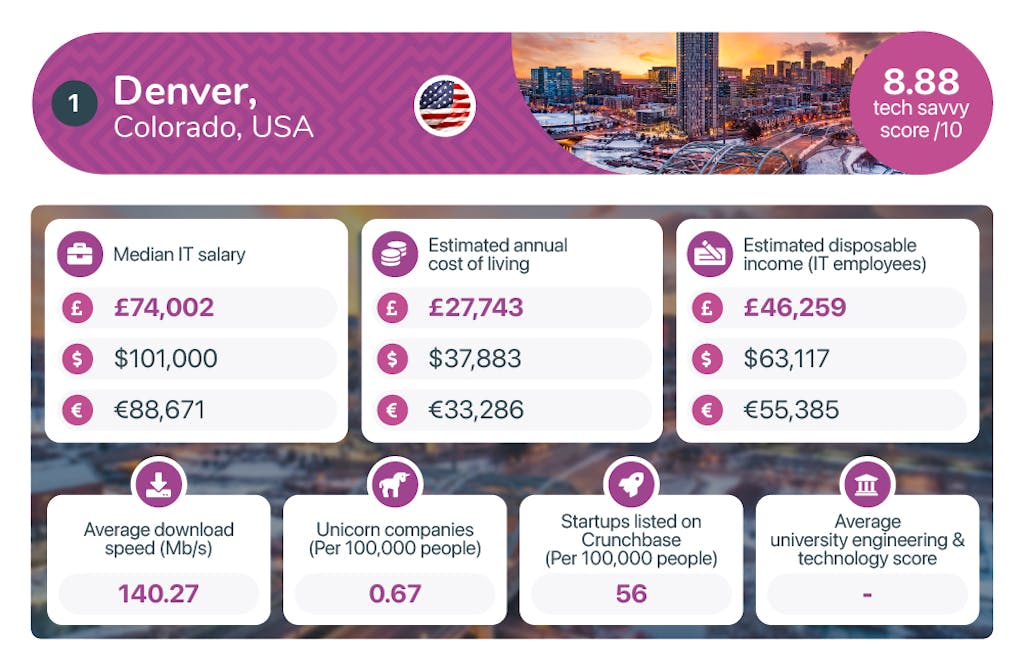 In first place is a city not necessarily always thought of as one of America’s tech hubs, Denver, Colorado.

However, Denver scored highly across the board, particularly in terms of average internet speed (for which it was the top-scoring city), as well as the numbers of unicorn companies per 100,000 people and the level of disposable income for tech workers.

Denver, like many other cities, experienced a tech boom in the mid to late 90s and is home to the Denver Technological Center. 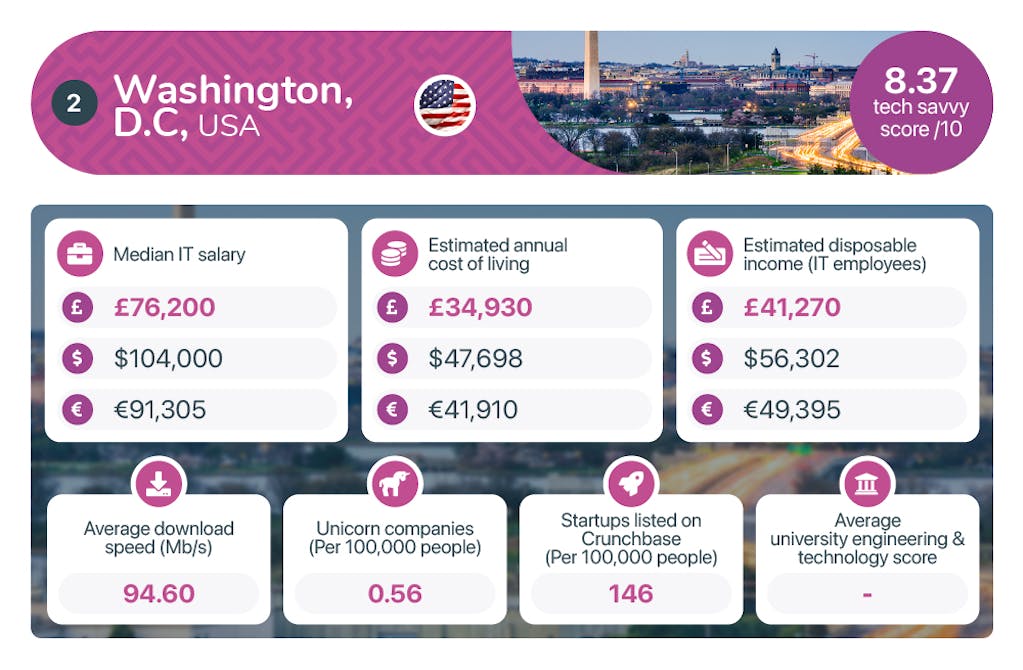 The capital of the United States comes in second place, being home to a large number of tech startups (146 per 100,000 people, the second highest overall).

Washington has a reputation as a progressive, millennial-focused city, which lends itself to fostering innovation and new ideas, with many startups choosing the capital as their home. 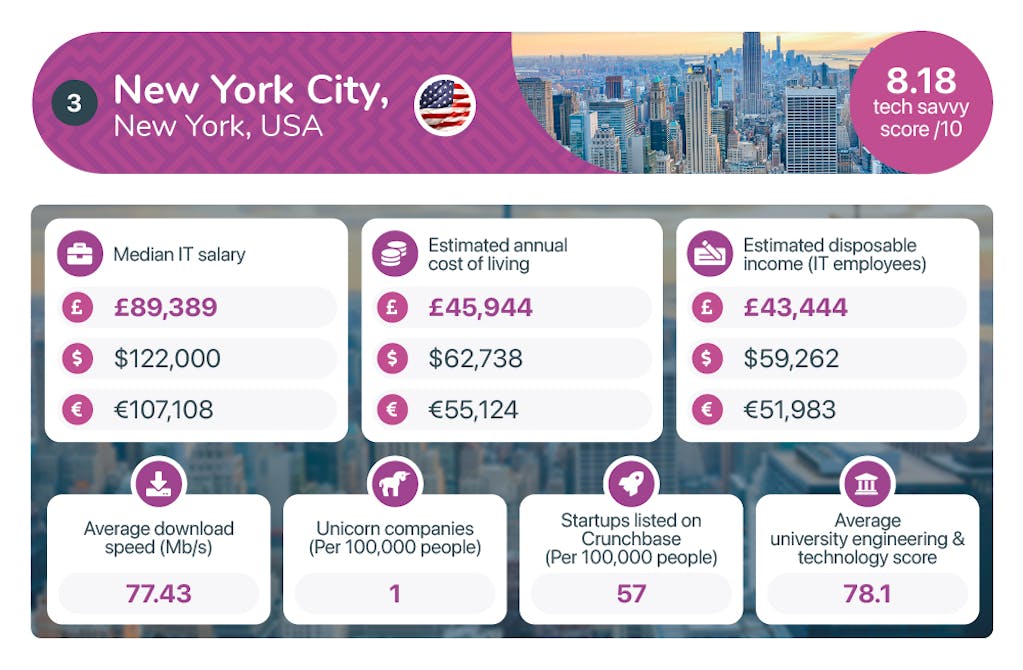 Taking third is New York City, which had one of the highest rates of unicorn companies outside of San Francisco, with one for every 100,000 people in the city.

The Big Apple is home to ‘Silicon Alley’, an area known for its concentration of high tech businesses in fields such as telecommunications, digital media, fintech, software and more. The sector is quickly growing in New York, supported by the Tech:NYC non-profit organisation.

When it came to the earnings potential of those working in the tech sector, it was Dallas, Texas, that claimed top space. IT employees in the city have a median average income of £79,864, and once we take the average annual cost of living into account, this means a disposable income of £54,656.

A strong, reliable and speedy internet connection is obviously vital for those working in tech, and the city which came out as the clear winner here was Denver, Colorado, with an average download speed of 140.27 Mb/s.

A unicorn company is a privately held startup with a valuation of over $1 billion and that makes them the most successful startups in the world. San Francisco is home to the most, with over 14.94 per 100,000 people, including Discord, Reddit, Clubhouse and more.

San Francisco also came top when it came to the total number of startups listed on Crunchbase, with 557 per 100,000 people. As mentioned, the city has experienced a couple of startup booms in the past 20 years or so that have invigorated the local economy, with large numbers of app developers and marketing and design agencies.

It’s not just potential employment in the tech sector that might draw people to a particular city, but also education. Looking at the universities highlighted by QS World University Rankings for their tech degrees, the city with the highest average score is Vancouver, which is home to the University of British Columbia.

Money.co.uk analysed the cities above based on the following factors, starting with a shortlist of tech cities from the following sources, omitting any cities for which data was not available for each factor:

Each city was given a normalised score out of ten for each factor before an average of all four scores was taken.

The average salary for information technology jobs on Salary Explorer, converted into GBP, USD and EUR as of December 20th, 2021, using Xe.com.

The estimated monthly cost of living for a single person was taken from Numbeo (multiplied by 12 to give an annual figure) and subtracted from the median income to give an estimate of annual disposable income.

The average broadband download speed in Mb/s according to Broadband Speedchecker’s ISP directory.

The number of unicorn companies currently listed on CB Insights, calculated per 100,000 people according to population data from World Population Review.

The number of startup companies currently listed on Crunchbase, calculated per 100,000 people according to population data from World Population Review.