Sports fans can be passionate and tribal, with rivalries splitting cities down the middle. But if we were to look at their sporting successes as a whole, who would come out on top?
Share this guide

Sport is a huge part of any area’s identity and local sporting teams are often the first thing people associate with certain locations around the world.

If you are a big sports fan and want to live closer to the action, then make sure you compare mortgage deals to find the best option for you.

To find which places have the most rich sporting heritage, and options when catching a game, the mortgage experts at money.co.uk looked at seven major sports (as well as the Summer & Winter Olympic Games) to see which countries have had the most success when competing on a global scale.

The most successful sporting countries 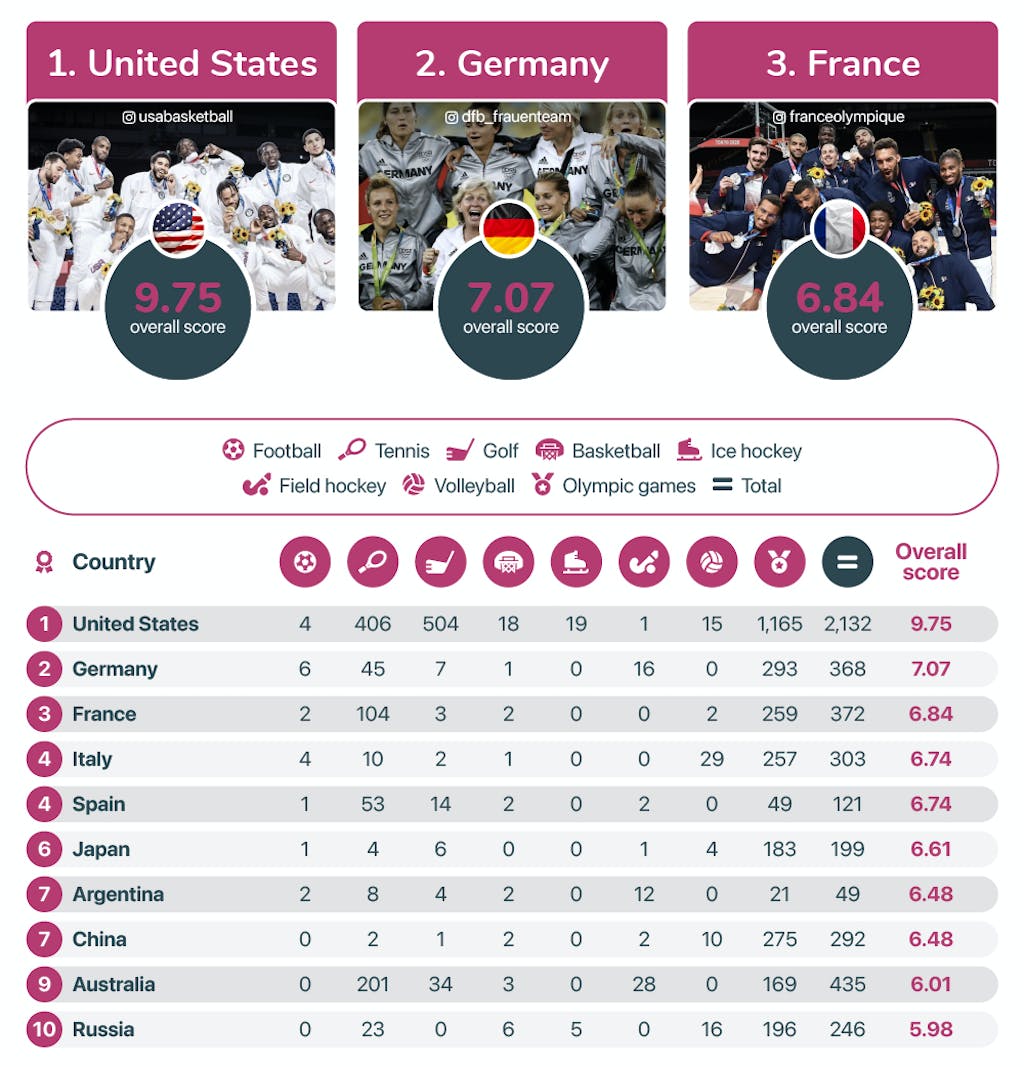 Looking across a number of global competitions, it’s the United States that comes top, with more than 2,000 victories throughout history.

While the majority of these come in the form of Olympic gold medals, the US dominates in a number of sports too, such as tennis, golf and basketball.

The US was followed by Germany, which has enjoyed success in sports such as football and field hockey, as well as the Olympic Games.

The most successful national football teams 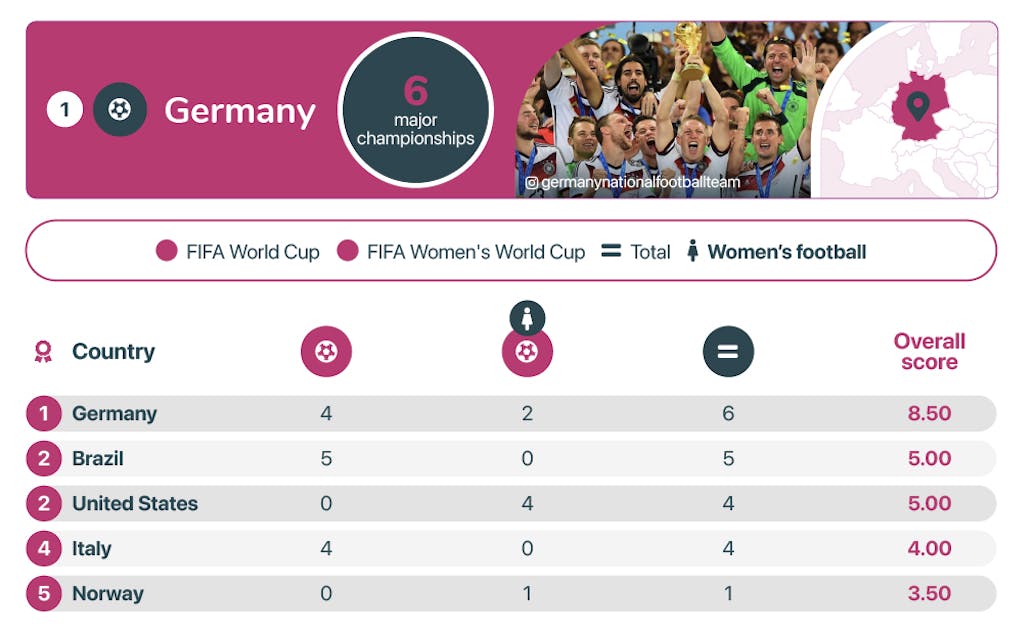 Football (or soccer) is the most popular game in the world, played right around the globe with a huge fanbase. When it comes to international competitions, Germany has been the most successful, as the only country to have recorded victories in both the men’s and women’s World Cups, having won the two tournaments a combined six times.

The most successful tennis countries 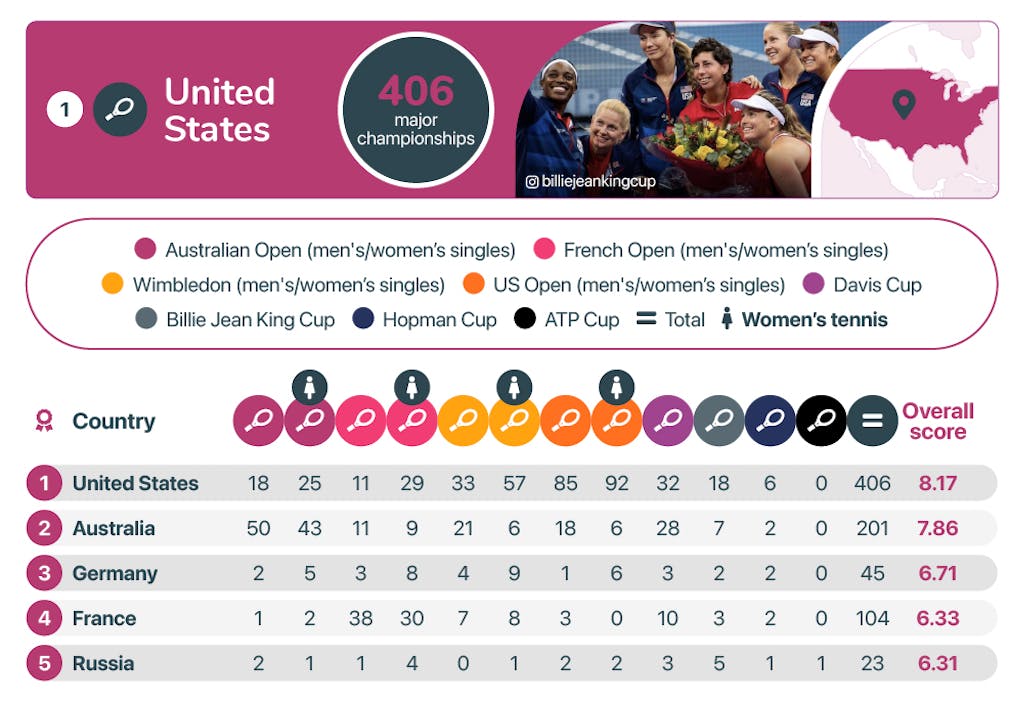 Another sport that the United States has seen great success in is tennis, with American tennis players winning 406 major championships between them. The US is the most successful country in both the men’s and women’s US Open, as well as the Davis Cup, Billie Jean King Cup and Hopman Cup.

Australia has also seen great success, not just on their home patch in the Australian Open, but also in the likes of the Davis Cup and US Open, in which they are the most successful nation other than the US.

The most successful golf countries 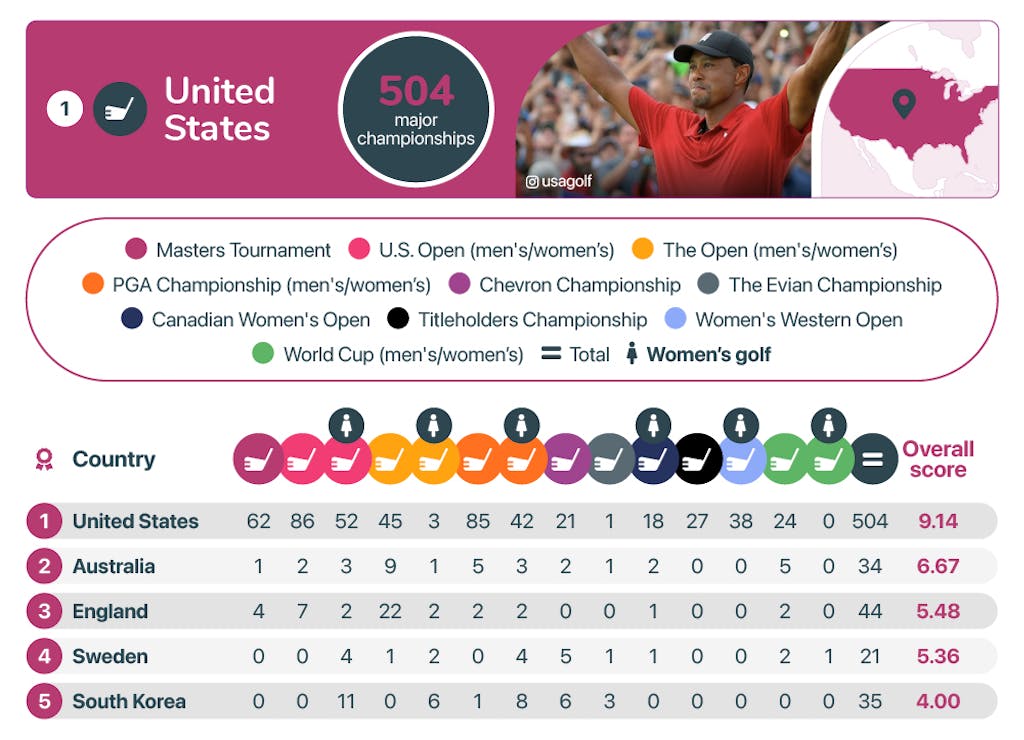 The top nations for tennis also happen to be the most successful when it comes to golf, with the United States having secured over 500 wins in men’s and women’s majors, as well as at the golf World Cup.

Some way behind the US is Australia, which is the second-most successful nation in a number of competitions such as the men’s World Cup and PGA Championship.

The most successful national basketball teams 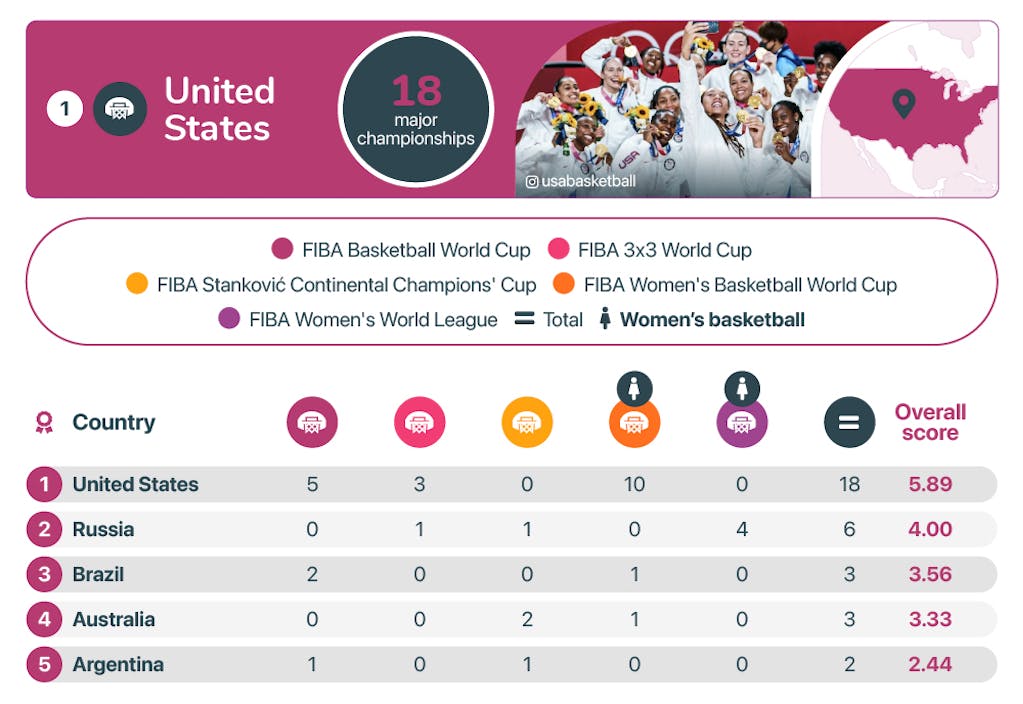 The NBA is by far the most popular basketball league in the world, so it stands to reason that the USA is also the most successful nation globally when it comes to the sport, with 18 championships across a number of competitions.

Russia comes in second place. Largely due to the country’s dominance in the FIBA Women's World League, which was won by a Russian team in each of the four years that it was played. 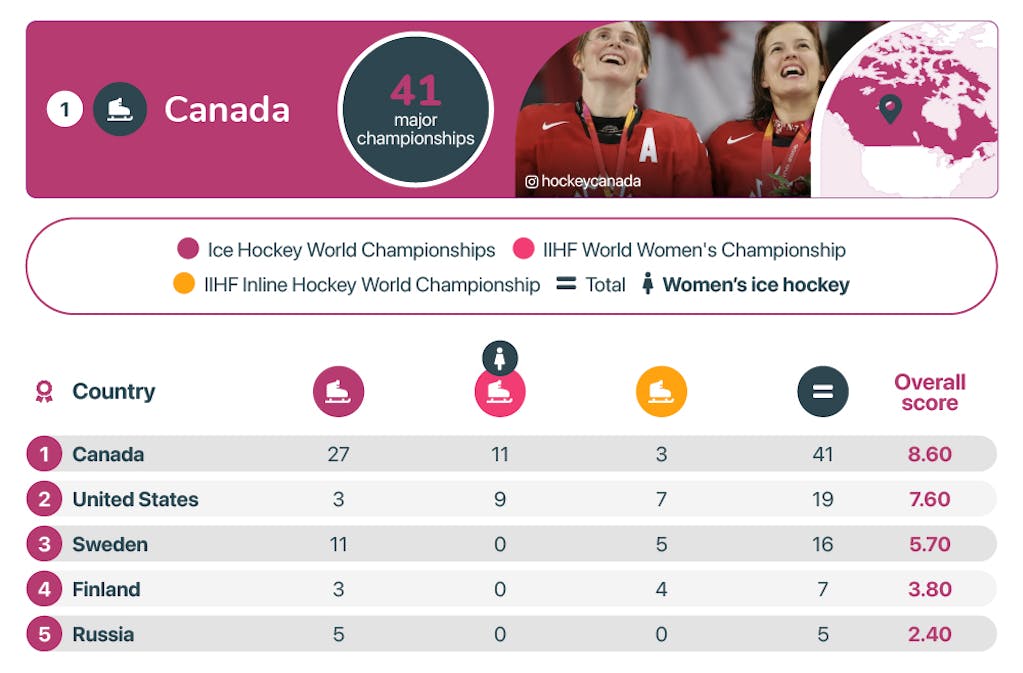 While not performing too well in many other sports, Canada rightly takes its place at the top of the leaderboard when it comes to ice hockey, as the sport was invented here. Canada has won 41 major trophies over the years including 27 wins at the Ice Hockey World Championships.

Canada’s neighbours, the US, take second place, and the other top five are countries with colder climates, such as Sweden, Finland, and Russia. 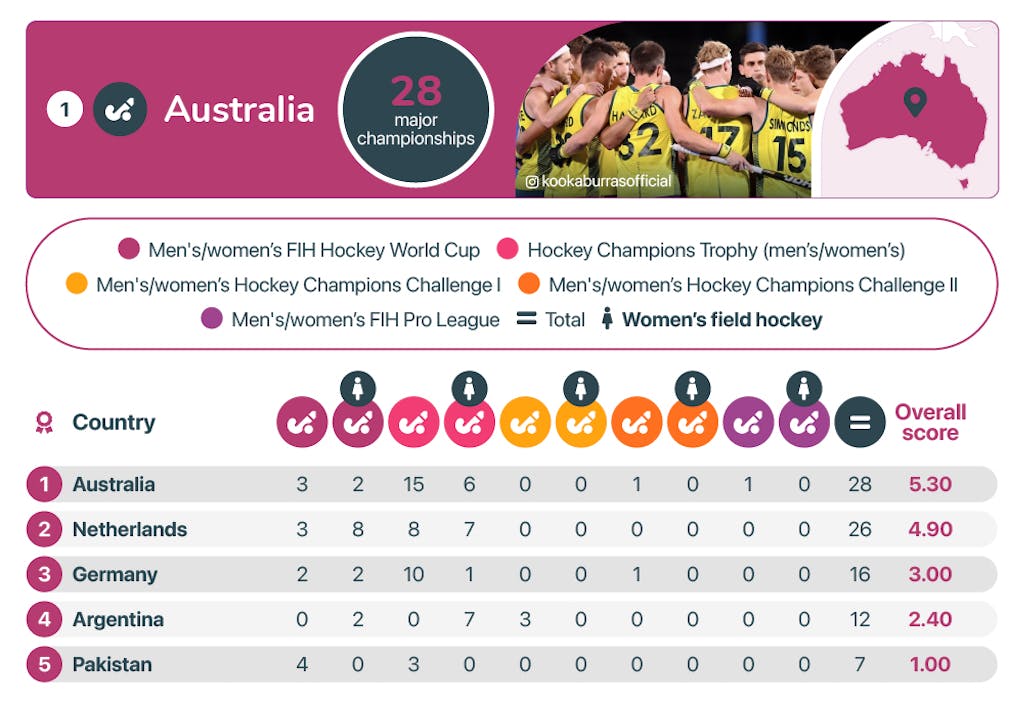 While successful ice hockey teams tend to come from colder countries such as Canada and Russia, the opposite is true for field hockey, with Australia being the most successful country, with 28 titles, including 15 in the men’s Hockey Champions Trophy.

The most successful national volleyball teams 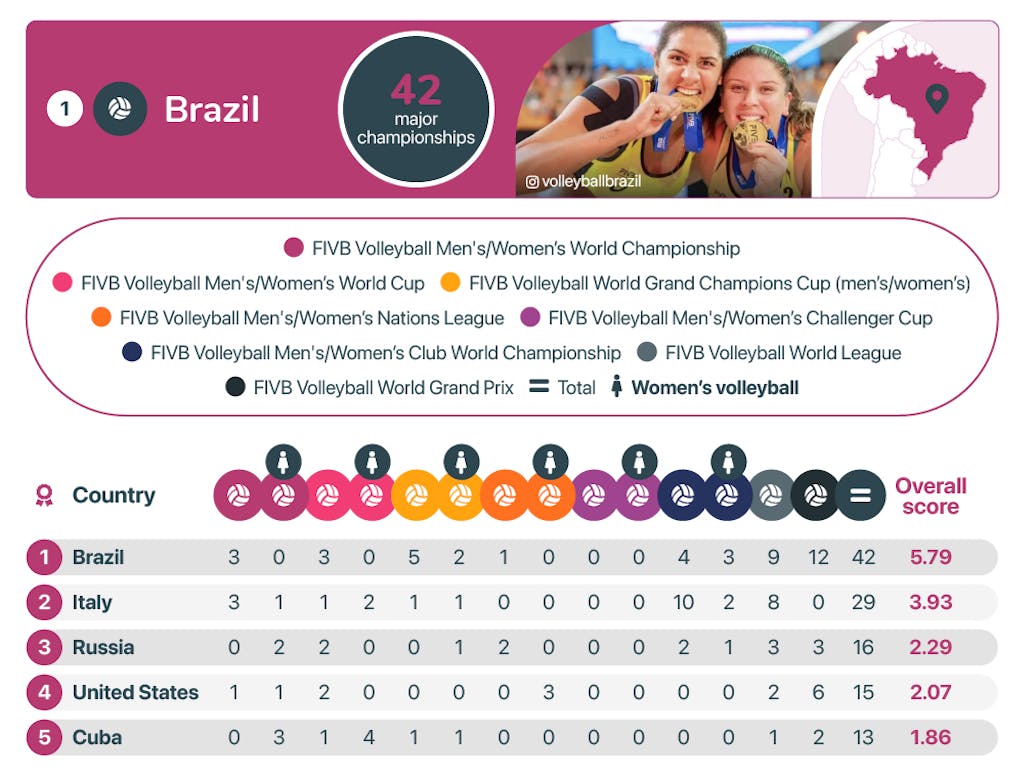 The most successful countries at the Olympic Games 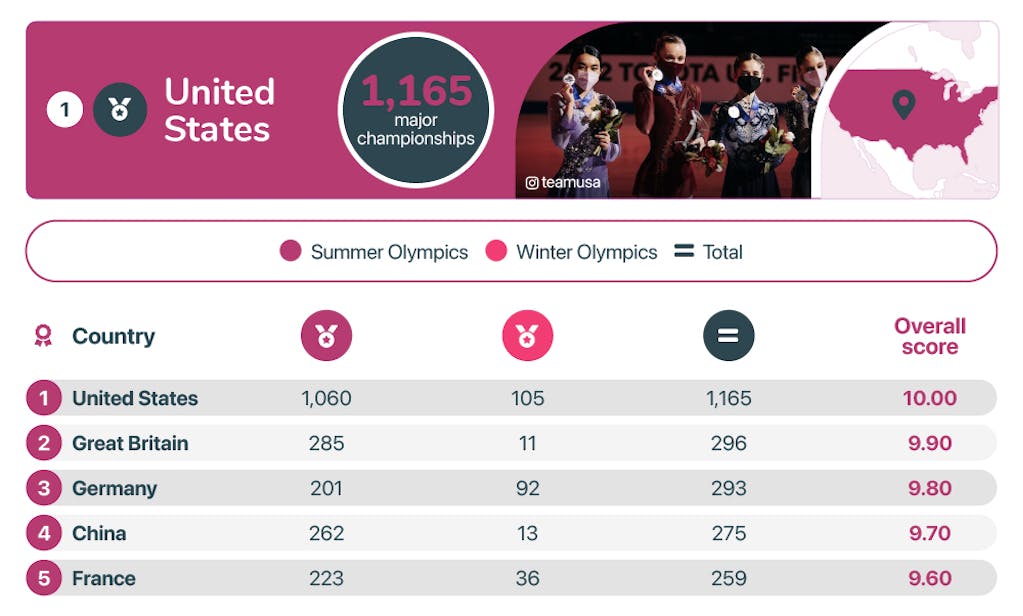 The modern Olympic Games have been contested since 1896 and thousands of gold medals have been won over the years, but by far the most successful nation is the United States, with over 1,000 gold medal victories between the Summer and Winter Games.

While some distance behind in terms of medal count, Great Britain takes second place, having picked up 296 golds (just 11 of which have come at Winter Olympics), very closely followed by Germany, with 293.

The most successful sporting cities in North America

Having determined the most successful countries on the global sporting scene, here’s a look at how things look more specifically in the United States, across the major sports of American football, basketball, baseball, ice hockey, and association football. 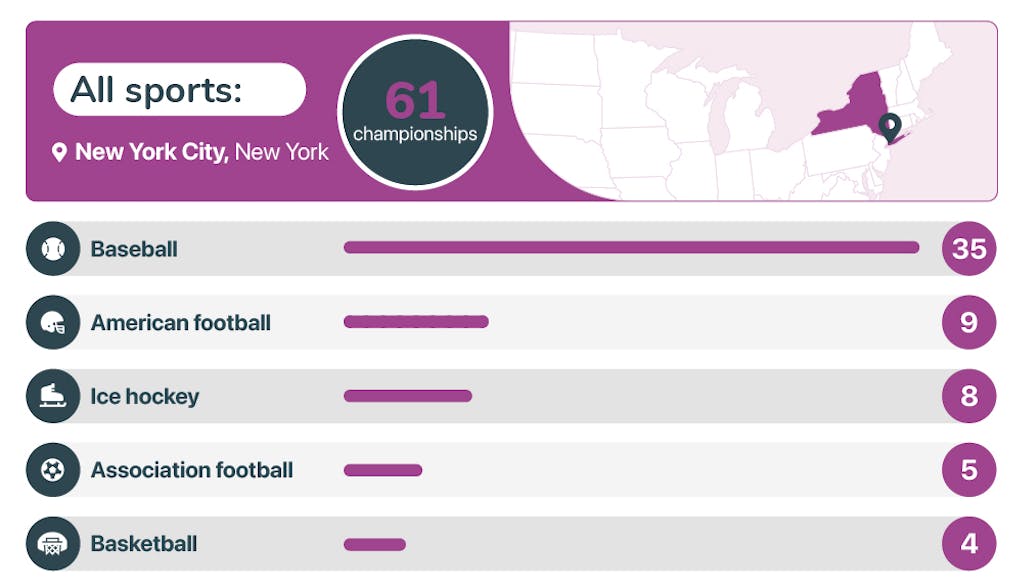 Taking into account championships won across the ‘Big 4’ sports (NFL, NBA, MLB & NHL), as well as association football (or soccer), there was only one winner when it came to the number of major championships, with New York claiming 61.

New York teams have been successful across the sporting spectrum, with iconic teams such as the Giants and Jets being victorious in the Super Bowl and both the Knicks and Nets picking up NBA championships.

While New York has a rich sporting heritage across the board, it’s baseball where the city truly shines, with 35 championships over the years between four teams.

Nicknamed the “Capital of Baseball”, the New York Yankees are the city’s most famous and successful team, with 27 championships, followed by the Mets with two. New York teams have faced each other in the World Series 14 times, in what is known as a “Subway Series”, although there hasn’t been one for over 20 years.

When it comes to basketball, Boston takes the crown with a total of 17 championships, all of which were won by the Boston Celtics.

A big part of the reason why the city can claim such a high number of titles is the fact that the Celtics are one of the only major franchises to have remained in their home city.

The NFL is the biggest sports league in North America, and its most successful city is Green Bay, Wisconsin, which despite being by far the smallest city competing in the major US sports, is home to the league’s most successful team of all time, the Green Bay Packers.

The Packers have won 13 league championships in total, including the first two Super Bowls to take place, an incredible achievement for a city of just over 100,000 people.

While Canadian cities don’t feature too highly on the honour rolls for other sports, it’s ice hockey where they come into their own, with Montreal holding a huge lead in terms of championships, with 26.

Montreal is famously a hockey-crazy city and was influential in the development of the sport, although the locals have been starved of success in recent years as the last championship victory came back in 1993.

Association football (or soccer as it’s better known on these shores) isn’t as popular as the other ‘Big 4’ sports, but its profile is steadily on the rise and is one of the few cities to host two teams in the MLS.

While the LA Galaxy have won five championships in the current MLS, the city has a strong soccer history, with both the Los Angeles Wolves and Aztecs winning the old NASL championship in the 1960s and 70s. 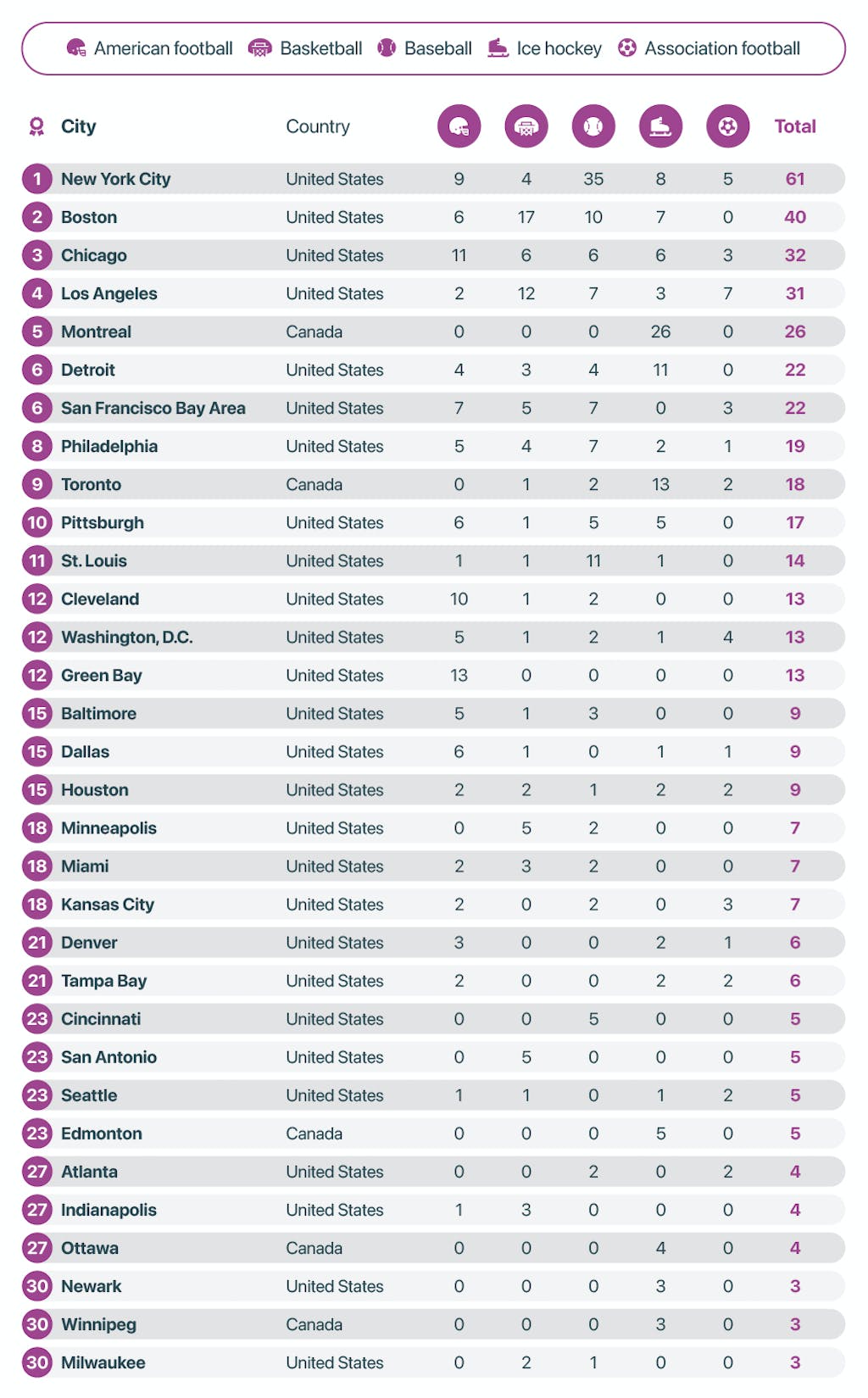 The North American cities with the most professional sports teams 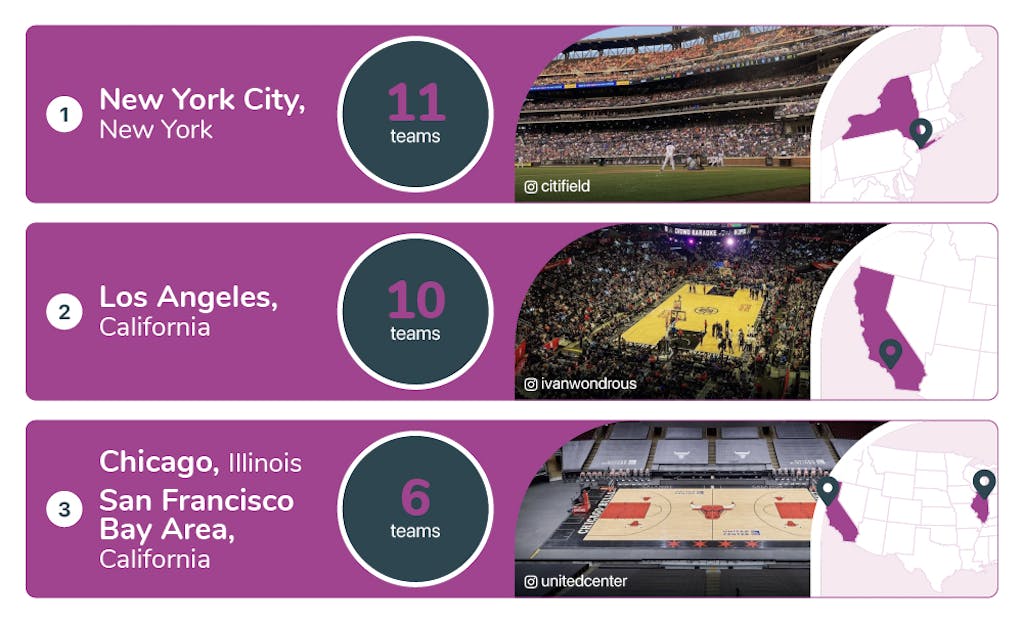 New York is the true home of sport in the US, with more professional teams than anywhere else.

In its entire history, New York has hosted more than forty professional teams and the Big Apple is currently home to nine teams across the ‘Big 4’ league, as well as a further two in the world of soccer, edging out Los Angeles on the opposite coast by one team.

The only other city to have two teams in each of the NFL, NBA, MLB and NHL is Los Angeles, California, with ten pro teams overall.

What’s more, they include some of the most successful in the country, including the Los Angeles Lakers in the NBA. Despite being one of the biggest cities in the US, Los Angeles didn’t have a presence in the country’s biggest league, the NFL, until 2015, but now has two teams, the Chargers and the Rams.

Two cities were tied as having the third-highest number of teams in the country, Chicago and San Francisco, with six each.

While the Windy City is home to the Bulls former team of NBA icon Michael Jordan), San Francisco hosts the likes of Giants and 49ers, as well as the Warriors, across the bay in Oakland. 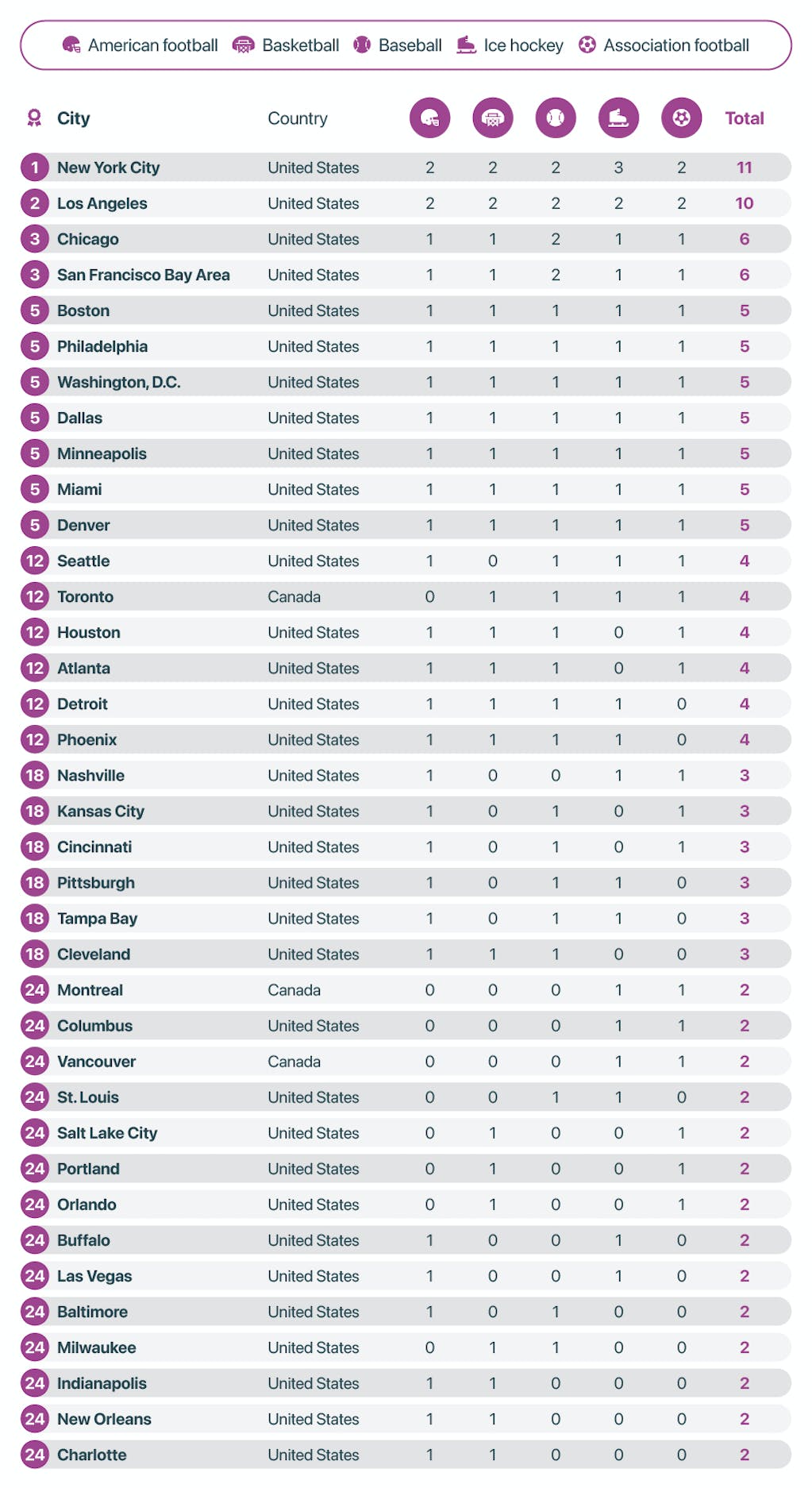 Sources for the number of championships won in each of the following competitions are available upon request.

Looking at seven major sports that are generally played globally, as well as the Summer and Winter Olympic games, money.co.uk looked at each senior, professional and global competition, taking the number of times each country (or individual competitors from that country) has won each competition in their history (or won gold at the Olympic Games).

As some competitions are played more regularly than others, we gave each country a normalised score out of ten for each competition based on how many times it has been played, before taking an average across each competition and sport to reach an overall score.

The number of championships won by the teams in each city in the following competitions:

World Hockey Association champions and all teams who won the Stanley Cup since the end of the Challenge Cup era.

The number of current teams in each of the NFL, NBA, MLB, NHL and MLB were sourced from Stadium Maps.