Professional athletes, especially those at the very top of their respective games, can afford spectacular homes in exclusive neighbourhoods. Our mortgage experts reveal how long it would take some of the world's greatest sports stars to afford a home in 105 countries.
Share this guide

Superstar athletes are well compensated in their fields, especially those with rewarding contracts and impressive endorsement deals. Their success means they can live A-list lifestyles in luxury homes.

So how long would it take the world’s richest athletes to buy a house around the world like the average person?

Unsurprisingly, it’s not very long at all, so what about buying a house right around the world?

Our mortgage experts have looked at the annual salary of the world's richest athletes to see how long it would take them to buy a house in 105 countries.

Looking to move? Compare mortgages to find the right deal for you.

How long would it take for the world’s richest athletes to buy a house around the world? 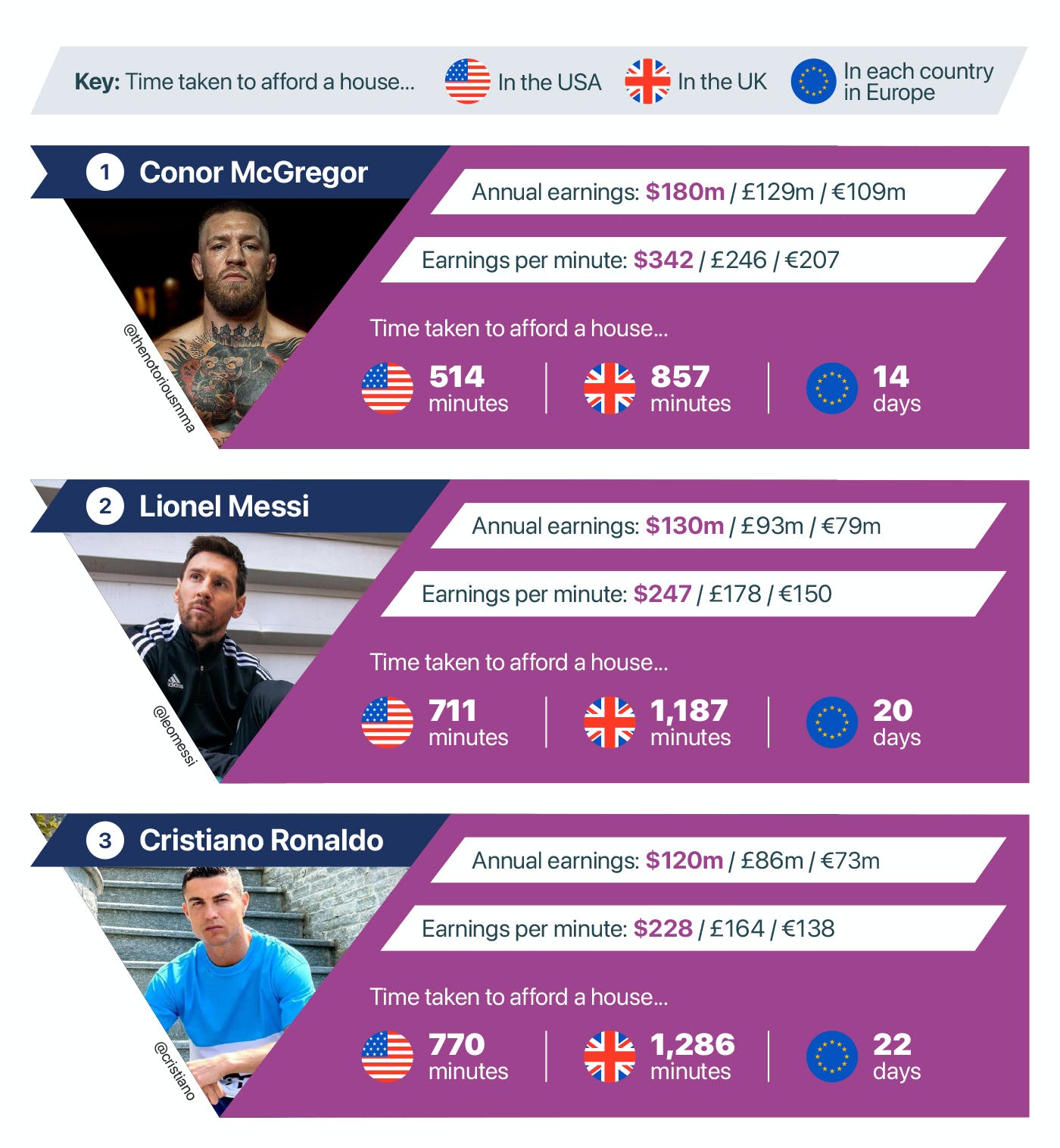 Time to afford a house in the USA: 514 minutes

Time to afford a house in the UK: 857 minutes

Time to afford a house in each country in Europe: 14 days

In 2020, the richest athlete in the world was mixed martial artist Conor McGregor, earning an incredible $180 million (£129 million).

What’s more, it would take him just 36 days to afford a house in all 105 of the countries analysed.

As well as a high profile fight with rival Dustin Poirier, McGregor also made millions from various endorsements and business interests.

Time to afford a house in the USA: 711 minutes

Time to afford a house in each country in Europe: 20 days

As arguably the best football player of all time, Lionel Messi is also one of the highest paid, earning an estimated $130 million (£93 million) in the last year.

Having recently left Barcelona after over 20 years in Spain, Messi will now be on the lookout for a home in Paris after signing for PSG.

And based on his earnings, Messi could afford to buy the average house in France in just 1,206 minutes (20 hours), and one in his native home Argentina in just a day's work at 497 minutes (8 hours). Within 50 days he would also be able to buy homes in 105 countries around the world.

Time to afford a house in the USA: 770 minutes

Time to afford a house in each country in Europe: 22 days

How long would it take the world’s richest Olympians to buy a house around the world?

With the 2020 Olympics finally able to take place in Tokyo this year, the analysis explored how long it would take some of the highest-earning Olympians to purchase a property around the world.

However, despite the fame and glory that success at the games can bring, the majority of the Olympic athletes that competed in Japan are not very well paid.

Those that are, are usually professionals in less traditional sports such as tennis, golf, and basketball. 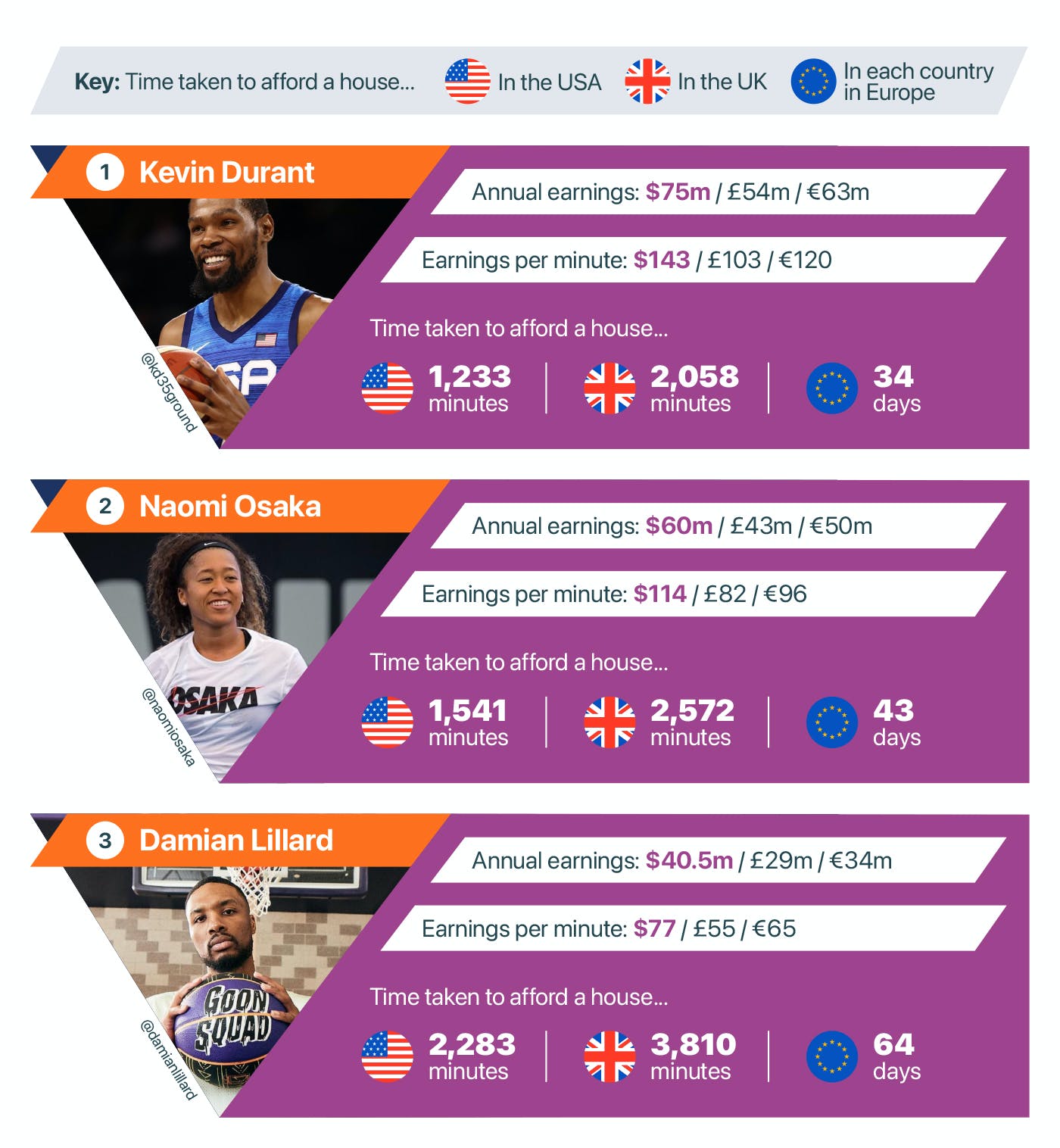 Naomi Osaka had the privilege of lighting the Olympic cauldron during the opening ceremony of the games and would be able to afford to buy a house in her homeland of Japan in just 3,640 minutes (60 hours).

The richest Brit competing in Tokyo is golfer Rory McIlroy, who made the majority of his $32 million (£23 million) in the last 12 months from off the course ventures such as partnerships with Nike, Omega and UnitedHealth Group.

Rory’s annual earnings means he could afford a home back here in the UK in just 4,822 minutes (80 hours).

All athlete earnings were sourced from Forbes’ 2021 lists of Highest-Paid Athletes and Highest-Paid Olympians and refer to income from both on-field salaries and winnings, as well as endorsements and any income from businesses, between May 1, 2020, and May 1, 2021.

To estimate how long it would take each athlete to be able to afford a house in each country, money.co.uk took the average price per square metre in 105 countries for which data was available, according to Numbeo. Note that data was unavailable from Numbeo for five countries in Europe, so European totals refer to 39 out of 44 countries.