Here in the UK, the argument over which town has the best selection of pubs has raged for centuries, but who can claim the honour on a global scale?
Share this guide

Whether a traditional pub, a trendy cocktail bar or a late-night superclub, having somewhere to go for a drink and meet up with friends at the end - or even the middle - of the week is important for many of us.

But where in the world can claim to have the most places to enjoy a pint per person? Having already revealed the places in the UK with the most options in Pubs to People, our mortgage experts have taken a look at the global cities that have the highest number of bars and clubs listed in Tripadvisor compared to their population.

If you're looking to move, then make sure you compare mortgage deals to find the best option for you.

Cities with the most pubs per people 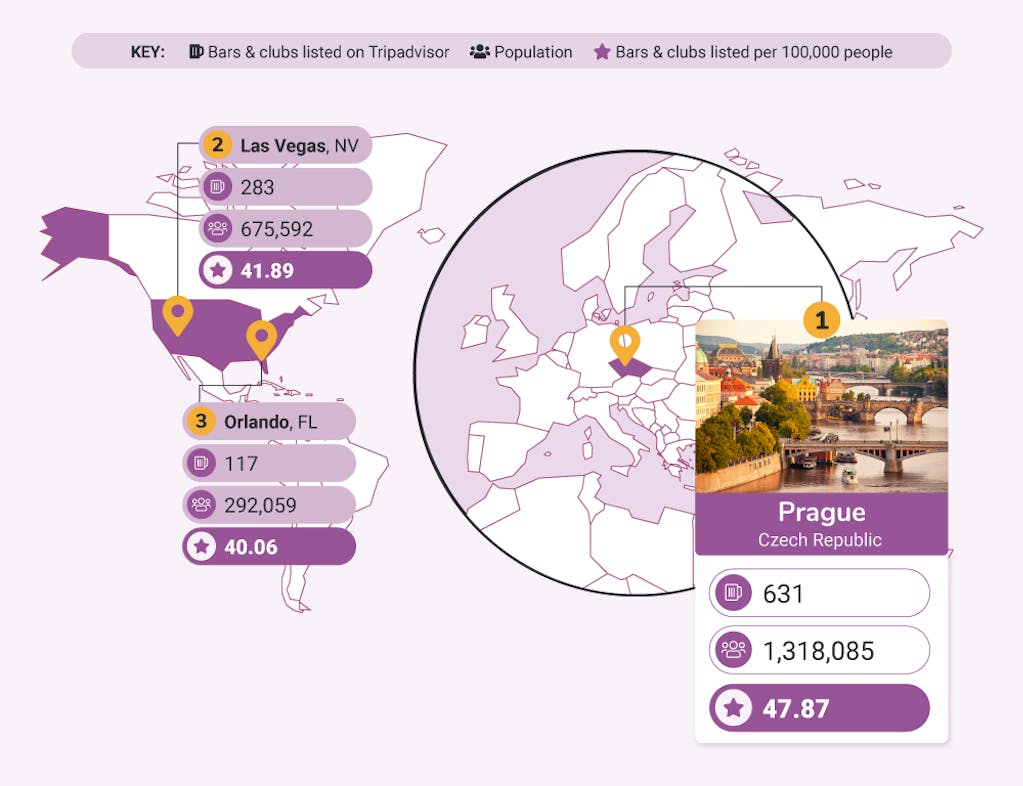 The Czech Republic is one of the highest beer consuming nations in the world, so perhaps it’s no surprise that Prague comes out on top as having the most drinking establishments per person, with 47.97 per 100,000 people.

The city has more than 600 bars listed on Tripadvisor, particularly in the districts of Malá Strana, Staré Město, Žižkov and Nusle, showcasing the best Czech beer from local breweries.

The bright lights of Las Vegas attract millions of tourists every year, with the nightlife being at the top of the agenda for many visitors.

Billed as the Entertainment Capital of the World, Vegas is a 24-hour city with something to cater for any kind of night, with 41.89 bars listed for every 100,000 people.

Another of America’s most popular tourist towns comes in third place, with Orlando, Florida, having just over 40 bars listed per 100,000 people.

Despite being a hugely popular destination, with lots of things to do (and places to drink!), Orlando is actually relatively small compared to many other major US cities, with a population of around 300,000 people.

Top 25 cities with the most pubs per person 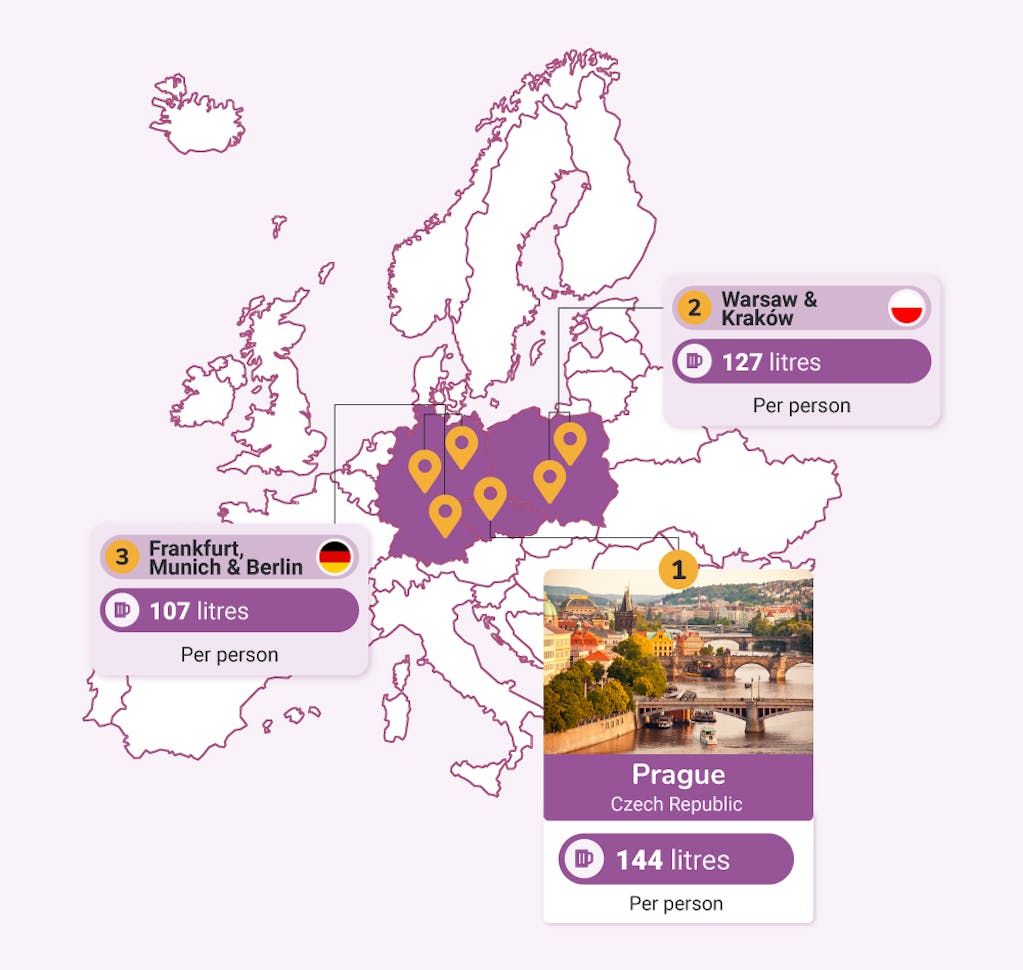 Looking specifically at Europe, it’s no surprise to see our global bar winner - Prague - take the European crown - especially given the average beer consumption per person is 144 litres of beer each year.

As the Czech Republic is also one of the biggest beer-producing nations, perhaps this shouldn't be a surprise although it’s also likely that a lot of that consumption is down to tourists, not just locals.

While Poland is perhaps a country more associated with vodka, beer consumption has been on the rise, and like Prague, both of these cities are popular party destinations for travellers.

And in third place, we have three German cities tied, Frankfurt, Munich and Berlin, each with beer consumption of 107 litres per person.

Germany is another country known for its beer production so it makes sense to see these cities near the top of this list, with the famous Oktoberfest being a prime example of these cities’ love for beer.

US states with the highest alcohol consumption 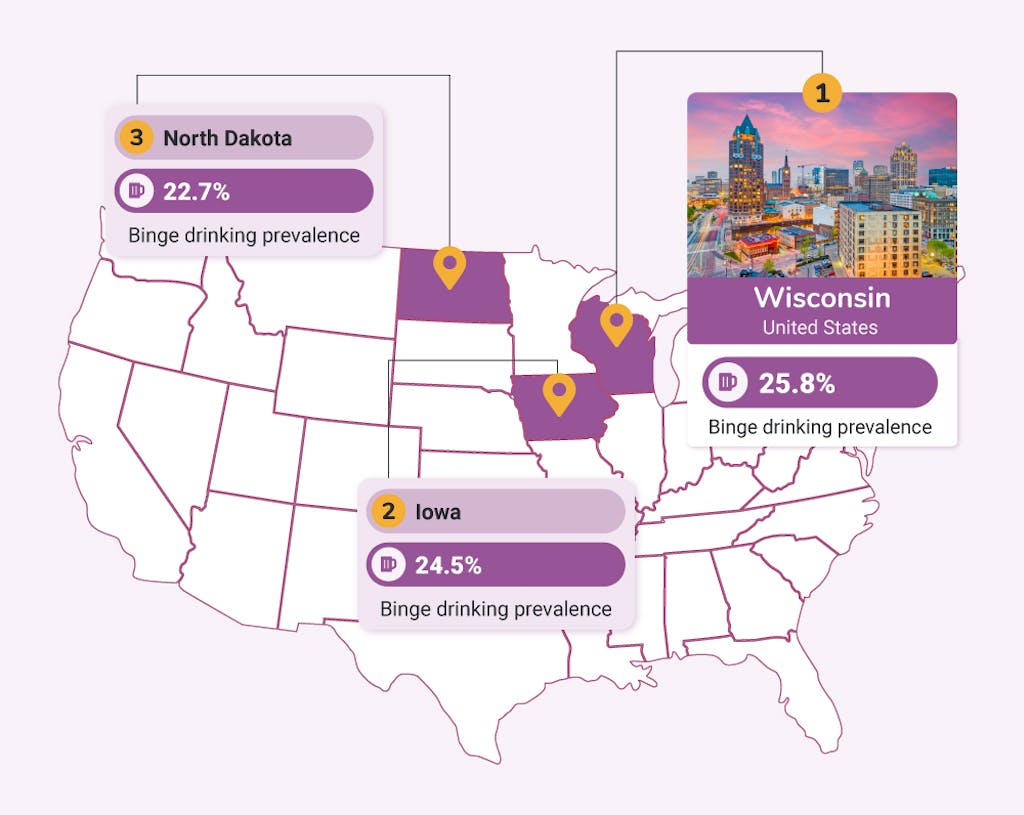 Looking over in the United States, the state with the highest number of binge drinkers is Wisconsin, with binge drinking being defined as five or more drinks in a single session for a man, or four or more for a woman.

Wisconsin’s neighbours in Iowa have the second-highest alcohol consumption, with 24.5% falling under the binge-drinking category.

Another Midwestern state completes the top three US states, with North Dakota having a binge drinking prevalence of 22.7%.

For each city, the number of bars and clubs listed on Tripadvisor was sourced (as of March 8th 2022).

This was then calculated per 100,000 people in each city, with the population figures being sourced from World Population Review.

Data for the countries with the highest beer consumption was sourced from Statista and shows the average annual per capita consumption of beer.

Data for the states with the highest binge drinking was sourced from the CDC’s data on excessive drinking and shows the percentage of adults that binge drink (five or more drinks in a single session for a man, or four or more for a woman).