Movies offer us an escape to new and exciting lands without having to leave the comfort of our sofas, but if you’re a true film buff, where in the world can bring that movie magic to life?
Share this guide

Whether it's having a wide choice of venues to catch a film, a thriving local film production industry, or frequent film festivals, there are lots of things that can make a city a fantastic place to live if you’re a film buff, but which are the best of all?

Everyone knows that Hollywood is the home of modern moviemaking, but there are plenty of other cities with lots to offer cinephiles, not just in the US, but right around the world.

Are you thinking about moving to a new city? Compare mortgages to find the right deal for you.

Here’s a look at some of the world’s best cities for film, as well as the cheapest and most expensive places in the world when it comes to a night at the movies.

The best cities for film lovers

The top city for movie lovers surprisingly wasn’t located in Hollywood, but in the UK, with London scoring 9.75 out of 10. London topped the rankings for two of the factors that we looked at; the number of cinemas (161) and the number of film tours (104). London's famous Leicester Square often plays host to world premieres of the biggest releases, while tours of the Warner Bros. Studios, where the Harry Potter series was filmed, are one of the capital’s most popular attractions.

While Los Angeles is certainly one of the most influential movie making cities, over on the East Coast, New York plays a huge role in the industry too. Hundreds of films are shot in the Big Apple each year and it hosts by far the highest number of film festivals, with over a thousand, including the Tribeca Film Festival, DOC NYC, the Asian American International Film Festival and New York International Children's Film Festival.

The home of Hollywood, Los Angeles had to make it into the top three. Aspiring actors, screenwriters and filmmakers are all drawn to the bright lights of LA to seek a career in the industry, and it’s estimated that one in six residents work in a creative industry in the city. As the home to a number of major studios, LA is also a popular filming location, with more films being shot in the city than anywhere else on our list. 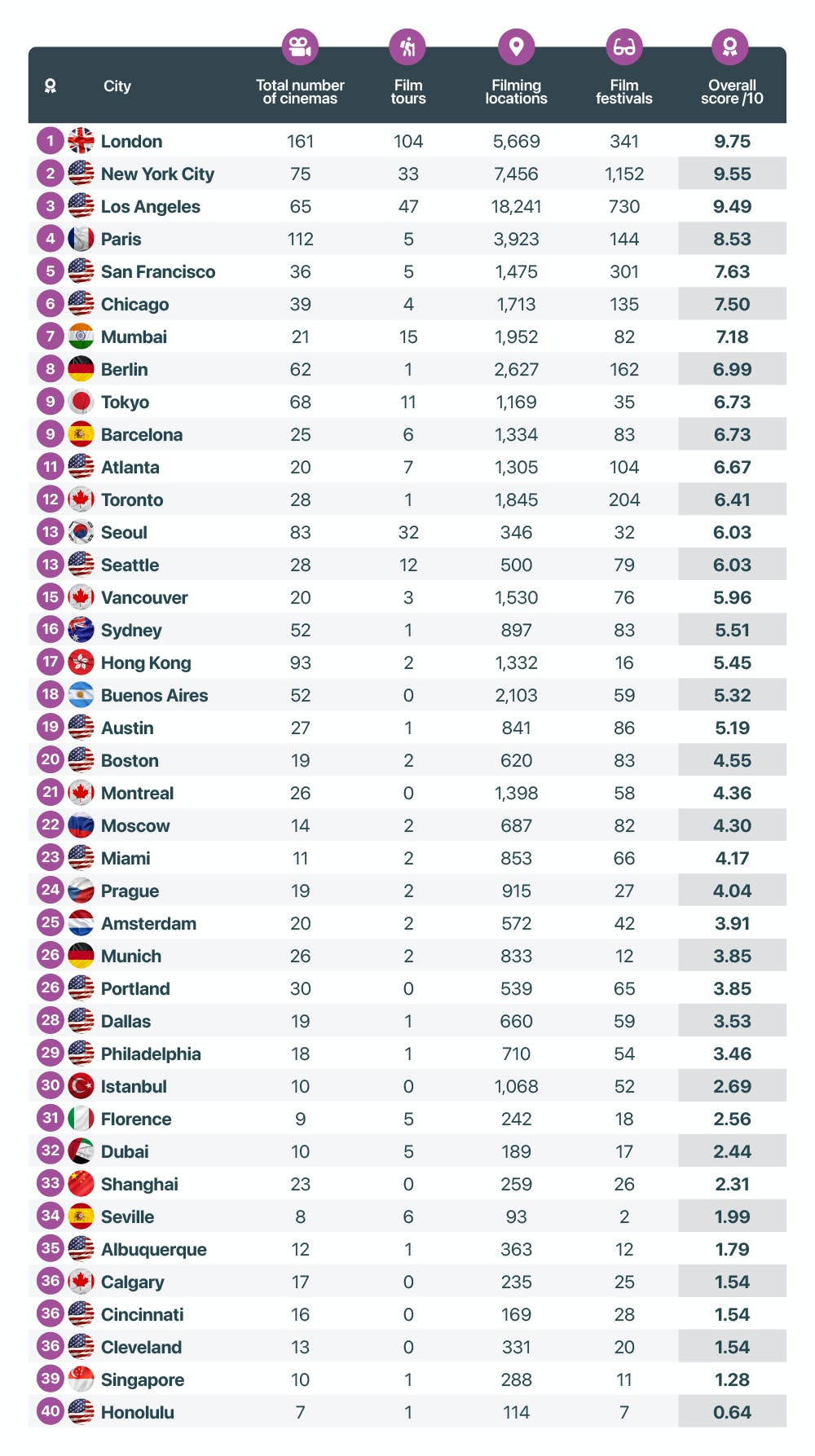 The best cities for…

If you’re a film lover, then the most important thing is obviously the number of movie theatres that you have to choose from. London tops the charts with 161 in total across the city, from huge multiplexes to a host of independent boutique picture houses, London has you covered.

Getting the chance to see behind the scenes at the studio where your favourite film was made is a great experience for movie buffs, and again it’s London that leads the way. London has more than twice as many film-related tours than anywhere else, including the Warner Bros. Harry Potter Studio Tour, as well as tours featuring locations from Downton Abbey, Sherlock Holmes, James Bond, and Paddington Bear.

Films are sometimes shot in a studio but filmmakers also like to make use of iconic landmarks and beautiful landscapes around the world. Los Angeles is home to more of these shooting locations than anywhere else, with over 18,000, such as the beautiful Griffith Observatory which has been used in the likes of La La Land, Rebel Without a Cause, and more.

Film festivals are a chance for filmmakers to debut their latest masterpieces and for audiences to discover new and exciting films, as well as revisit old favourites, and the city with the most was New York City, with over a thousand, including the New York Film Festival, Tribeca Film Festival, and Brooklyn Film Festival.

The cheapest and most expensive countries to go to the movies

Our experts also looked in more detail at which countries* around the world are the cheapest and most expensive when it comes to the price of a cinema ticket.

The cheapest countries to go to the movies 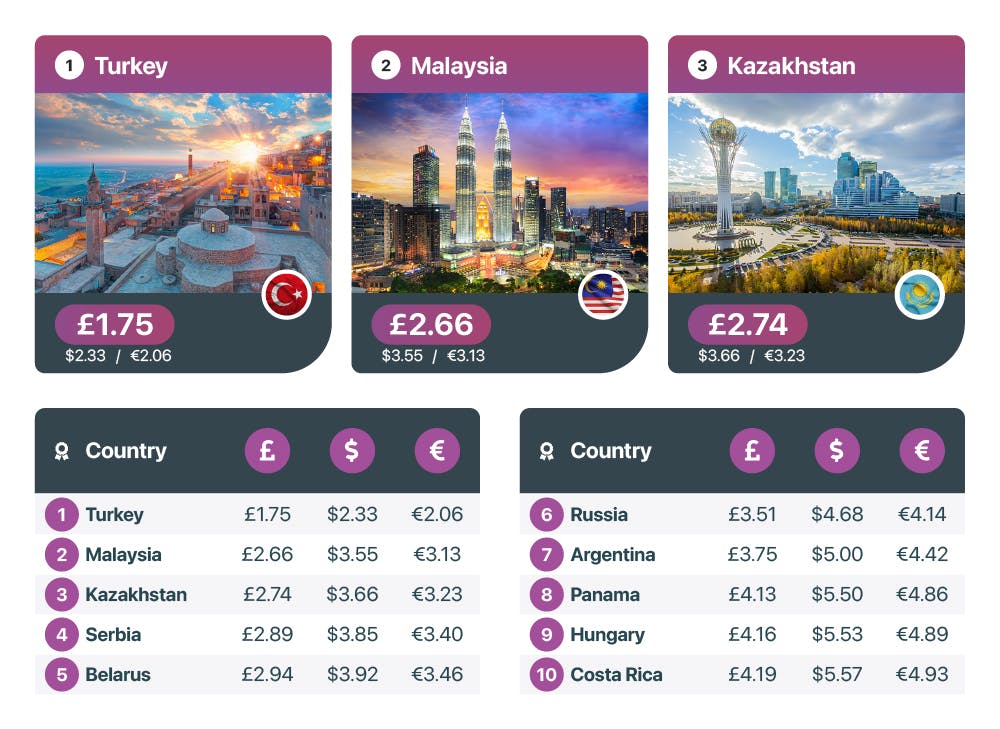 The most expensive countries to go to the movies 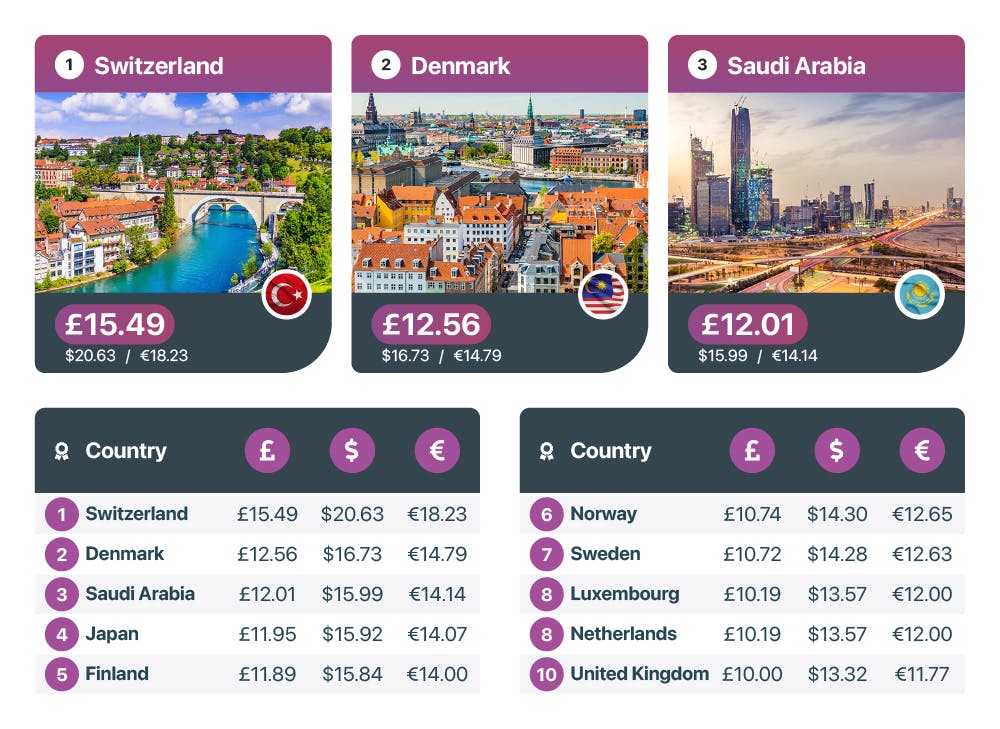 On the other hand, the cost of a trip to the cinema was much higher in other parts of the world, particularly Switzerland, where a ticket alone will cost you £15.49. The UK came in tenth, with an average cost of £10, with countries such as Denmark, Saudi Arabia, and Japan all costing more.

Money.co.uk ranked a combination of 40 major global cities and those known for their ties to the film industry, sourced from the following articles.

Each city was ranked on the following factors, giving each city a normalised score out of ten for each factor, before taking an average across all five factors.

The number of movie theatres currently open in the city according to Cinema Treasures, with data from Tripadvisor also being used for Seville, Tokyo, Seoul and Beijing.

The number of titles listed on IMDb that list the city as a filming location.

The number of film festivals listed on FilmFreeway.

Cheapest and most expensive countries

Money.co.uk also looked at the average cost of one ticket for an international release film according to Numbeo in developed countries* around the world.

*As defined by the UN’s Human Development Index.