Art isn’t necessarily just confined to gallery walls, it can be found in architecture, monuments, and even on the streets themselves. But which are the best cities in the world for art lovers?

From renowned artistic hubs like Paris, New York, and Berlin, to the up and coming hotspots, the world’s art landscape is vast and varied, with every city showcasing its own unique scene.

But which arty cities around the world can be crowned the very best? To find out, our mortgage experts ranked a variety of cities known for their art scenes and ranked them on a number of criteria.

As well as looking at the crucial things like the number of galleries, museums, and sculptures, the research also analysed some other factors that contribute to a place’s artistic pedigree, such as street art and highly rated art universities and colleges.

The world’s top 3 cities for art and culture lovers 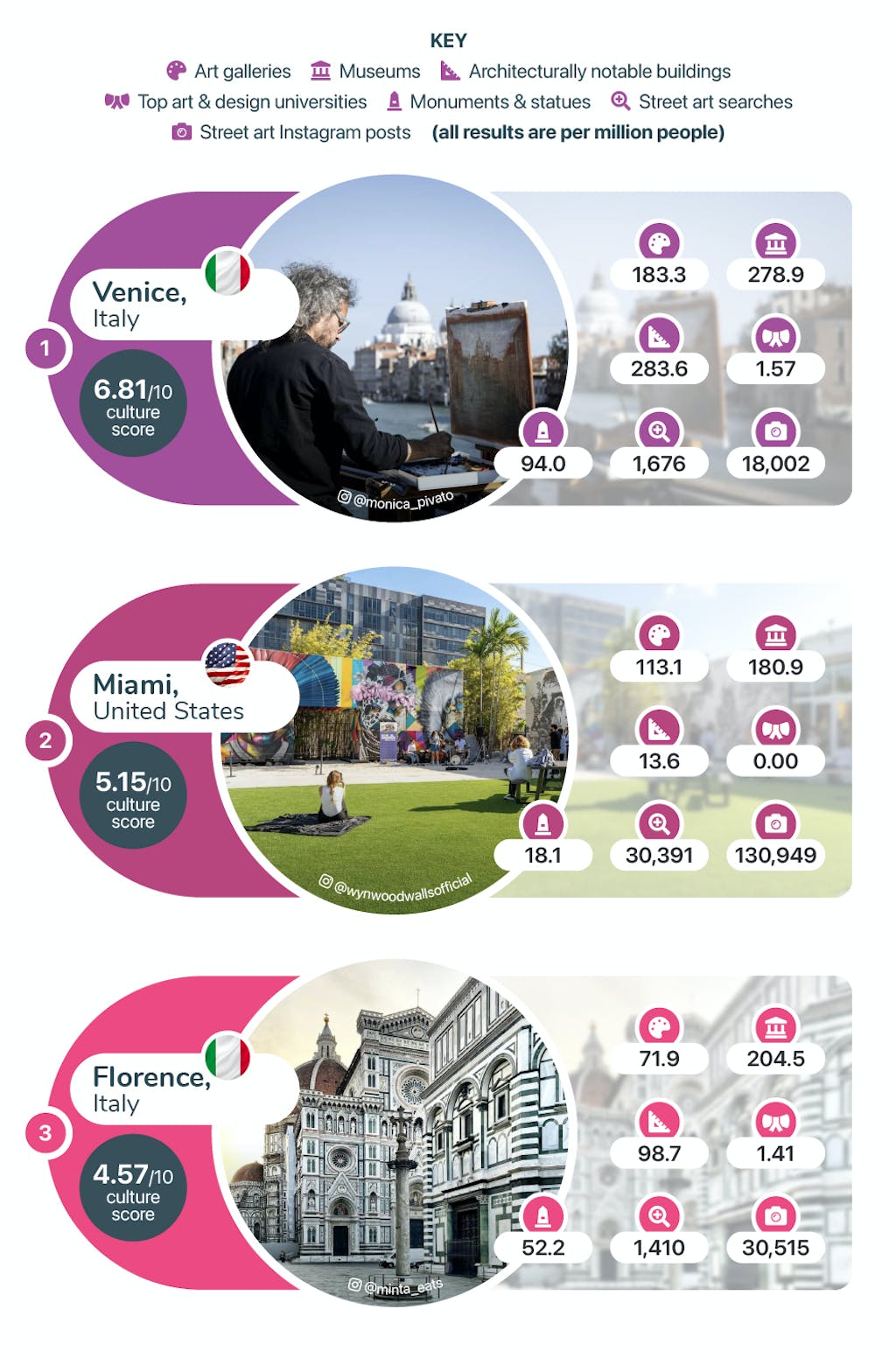 Venice takes the top spot and is considered one of the most culturally rich places in the world, shown by its top score for the number of architecturally significant buildings, monuments and statues. Venice was the home of many Renaissance artists and is a designated UNESCO World Heritage Site due to its culturally significant architecture and lagoon.

Another Italian city comes in third, Florence, the birthplace of the Renaissance. As you’d expect, examples of Renaissance art and architecture are everywhere you look in Florence, which is also home to the highest number of museums per person, including the likes of the Uffizi Gallery and Palazzo Pitti.

The best cities for art & culture lovers around the world

The world’s best city for…

Santa Fe, in New Mexico, isn’t considered one of the major cities in the USA, but certainly is amongst the art world and is seen as one of the leading art cities in the world. It is home to a huge number of art galleries and installations, reflecting its multicultural nature. In fact, Santa Fe has been named a UNESCO Creative City in Design, Crafts and Folk Art.

Once again, Santa Fe was the top city when it came to the concentration of museums, particularly around the downtown Santa Fe Plaza and Museum Hill. They include the Georgia O’Keeffe Museum, New Mexico Museum of Art, Site Santa Fe, Museum of International Folk Art and many more.

Venice is an undeniably beautiful city and has more architecturally significant buildings per million people than any of the other cities within this study. Venetian architecture is unique for a couple of reasons, such as the relative wealth of the city and the fact that it is on the unstable banks of canals. The city has also remained largely free from conflict for a very long time, helping to preserve the diverse architectural styles.

Vienna is nurturing the new generation of great artistic minds with its high proportion of universities, which are listed amongst some of the best for art and design including the Academy of Fine Arts Vienna.

Venice tops the rankings again, this time when it comes to the number of artistic monuments and statues to take in around the city. Walking through the city can feel like exploring an open-air gallery, with lots of beautiful sights to enjoy, whether they’re in the tourist hotspots such as San Marco, or further away from the centre.

Miami was the top scoring city for not just the number of people searching for street art, but also posting about it on social media. Miami has been referred to as America’s most Instagrammable city and is home to its own outdoor street museum (Wynwood Walls).

First, a number of articles and lists from publications such as The Times, Culture Trip and Hostelworld, were used to compile a shortlist of 40 cities.

Each city was then analysed on the following factors, with each being calculated per million people and given a normalised score out of ten for each factor, with the best city in each factor scoring 10, the worst city scoring 1 and the remaining cities calculated relative to those.

Finally, an overall average of all eight scores was taken for the final Art Score out of ten.