The personal finance experts here at money.co.uk researched worldwide search data using Google Keyword planner, to discover the most sought-after brands around the world, as well as the celebrities that were inspiring our fashion choices the most this year.
Share this guide

While numerous fashion weeks may have been cancelled across the world this year due to the pandemic, it hasn’t stopped people from wanting to look their best. Regardless of whether your budget is more Primark than Prada, or if your wardrobe is bursting with designer gear – we all have our favourite brands. But how does this differ across the world?

Compare 0% credit cards that could save you money on purchases you make, by offering a long interest free period and low APR.

What are the most popular fashion brands worldwide?

The most popular brand was found to be Louis Vuitton, topping the wish-lists of 47 different countries and far surpassing the second most lusted-after brand, Gucci.

Founded in 1854 the French fashion brand and its famous LV monogram is one of the world’s leading fashion houses. Interestingly, it’s also one of the most counterfeited brands in the world too due to its luxury price tag and high-end appeal.

Other high-end designers to feature on the list include Valentino, Chanel and possibly one of the most well-recognised and prestigious watch manufacturers worldwide, Rolex. Despite being Switzerland’s leading watch maker, the company was actually concepted in London in 1905. They have since gone on to create some of the most lusted-after watches around, with one single watch having sold for the eye-watering price of $17.75 million.

We’ve created a world map below to provide an at-a-glance view of which brands are most popular in each country. 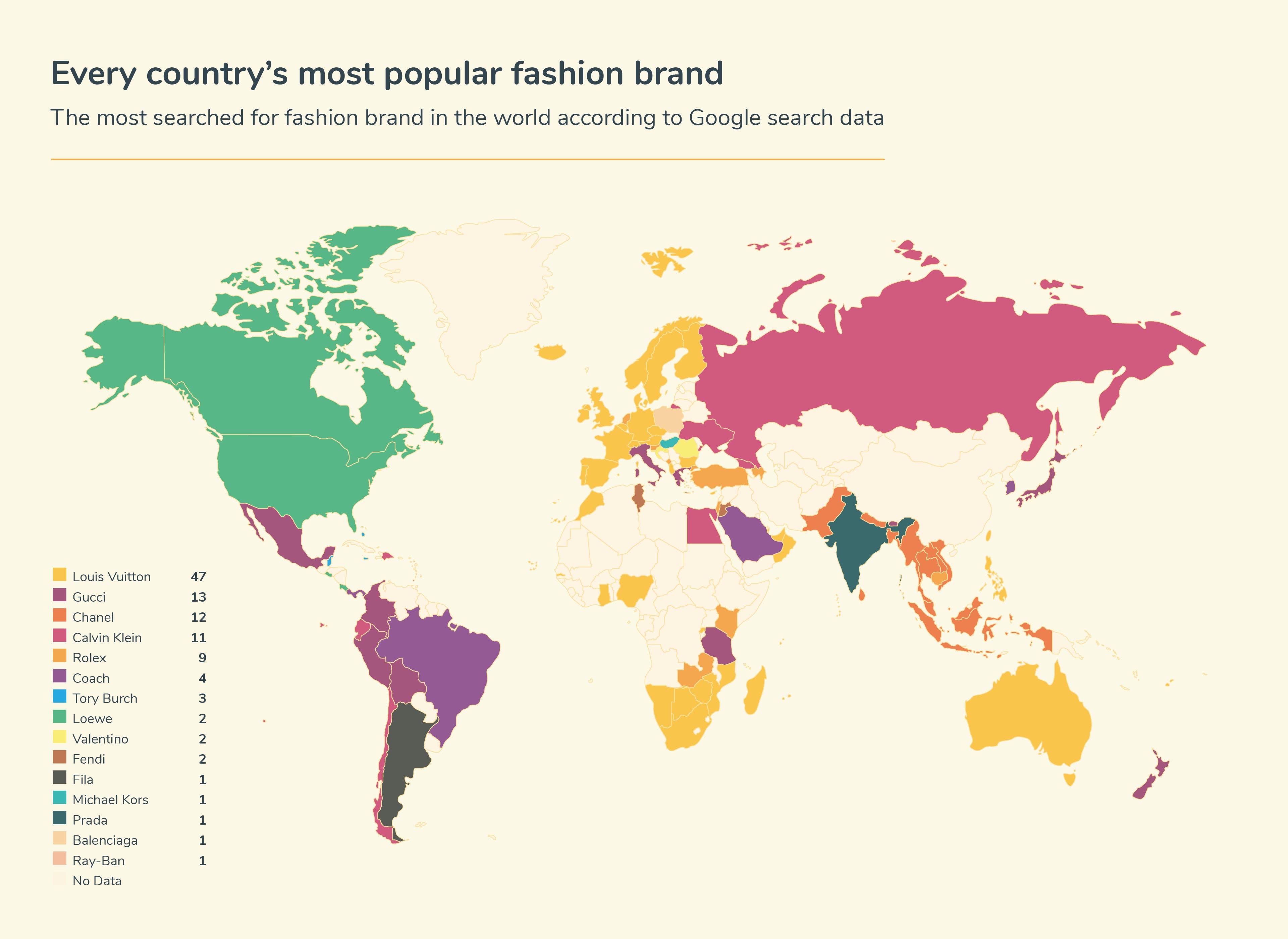 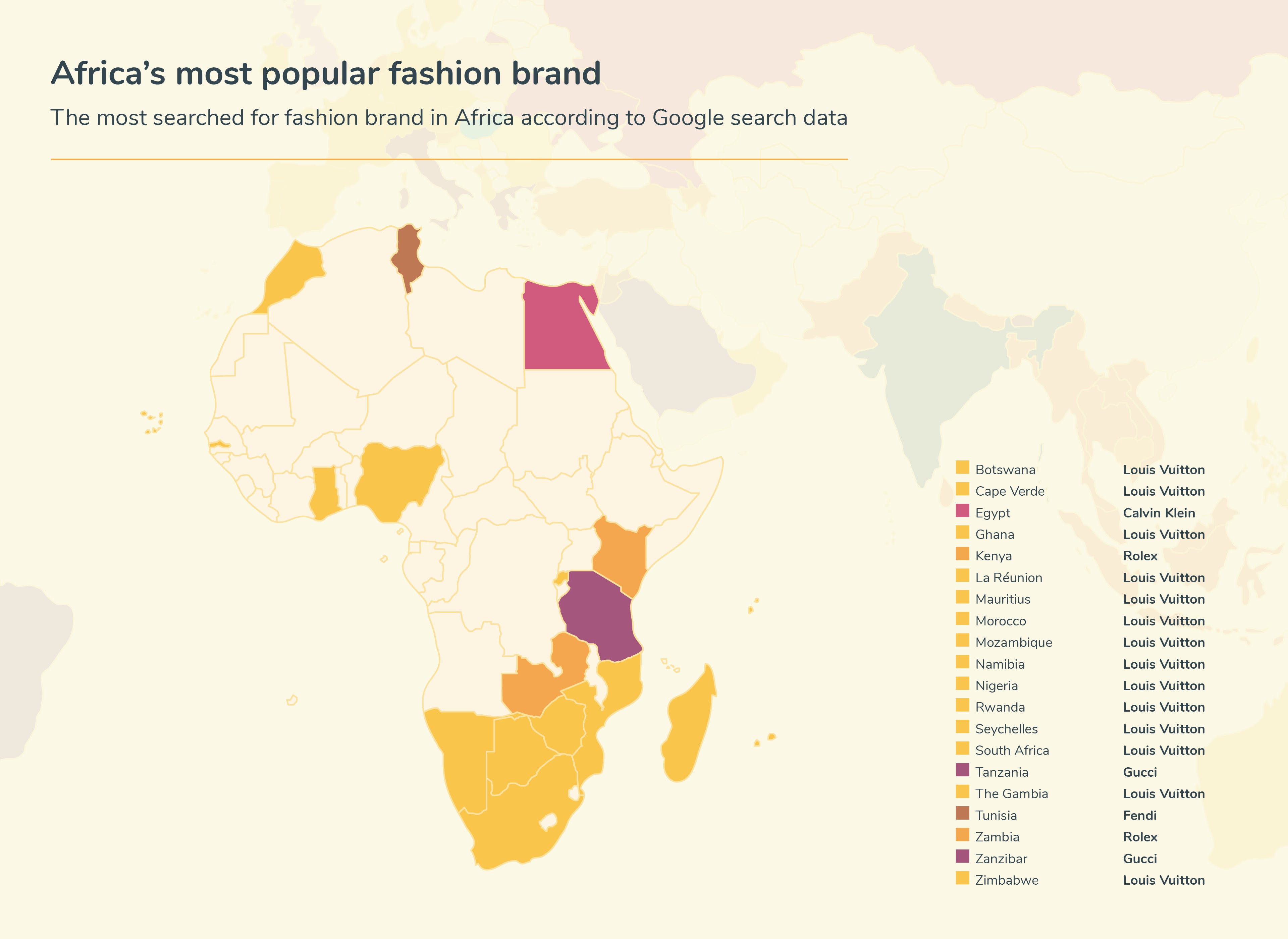 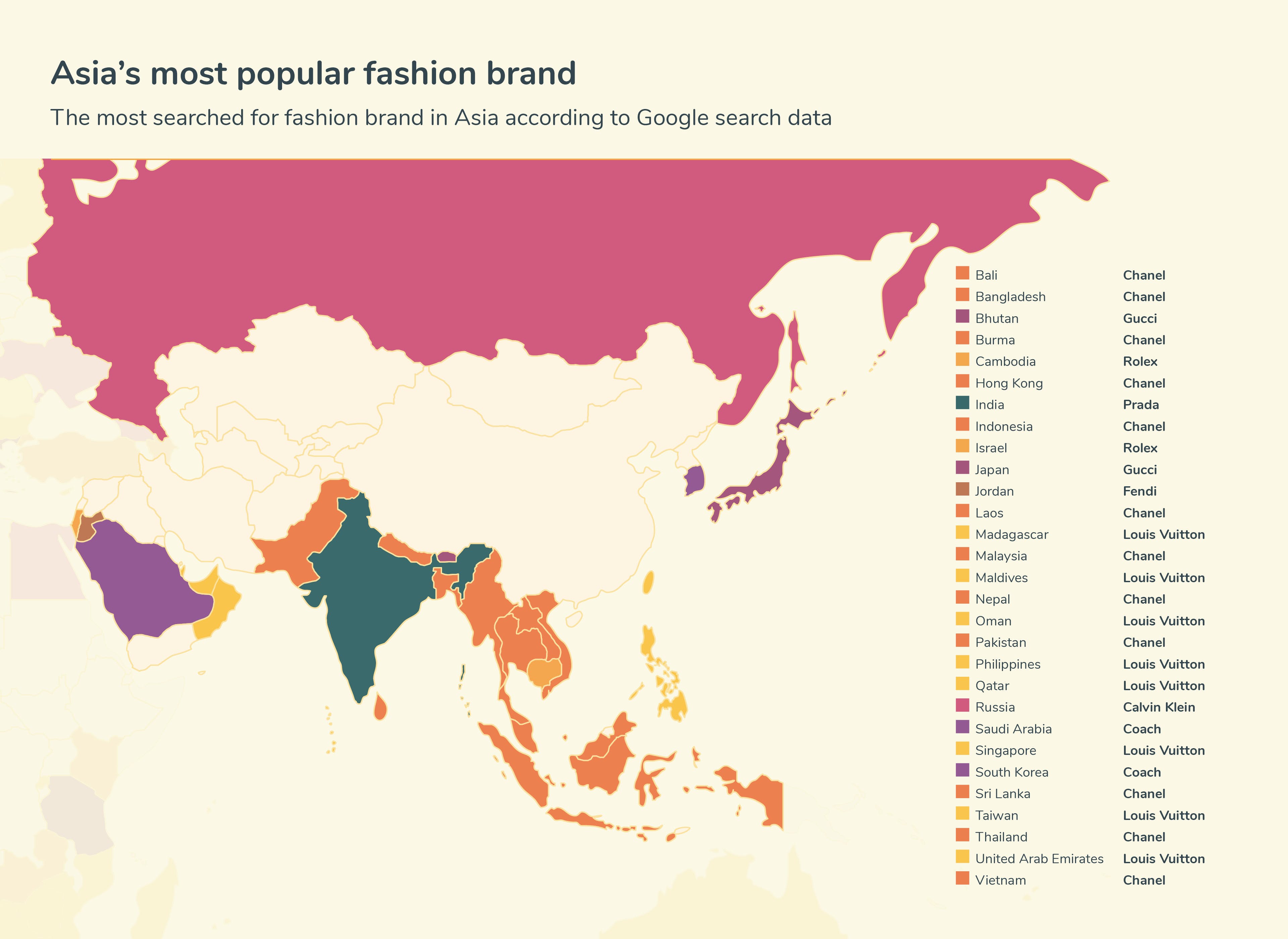 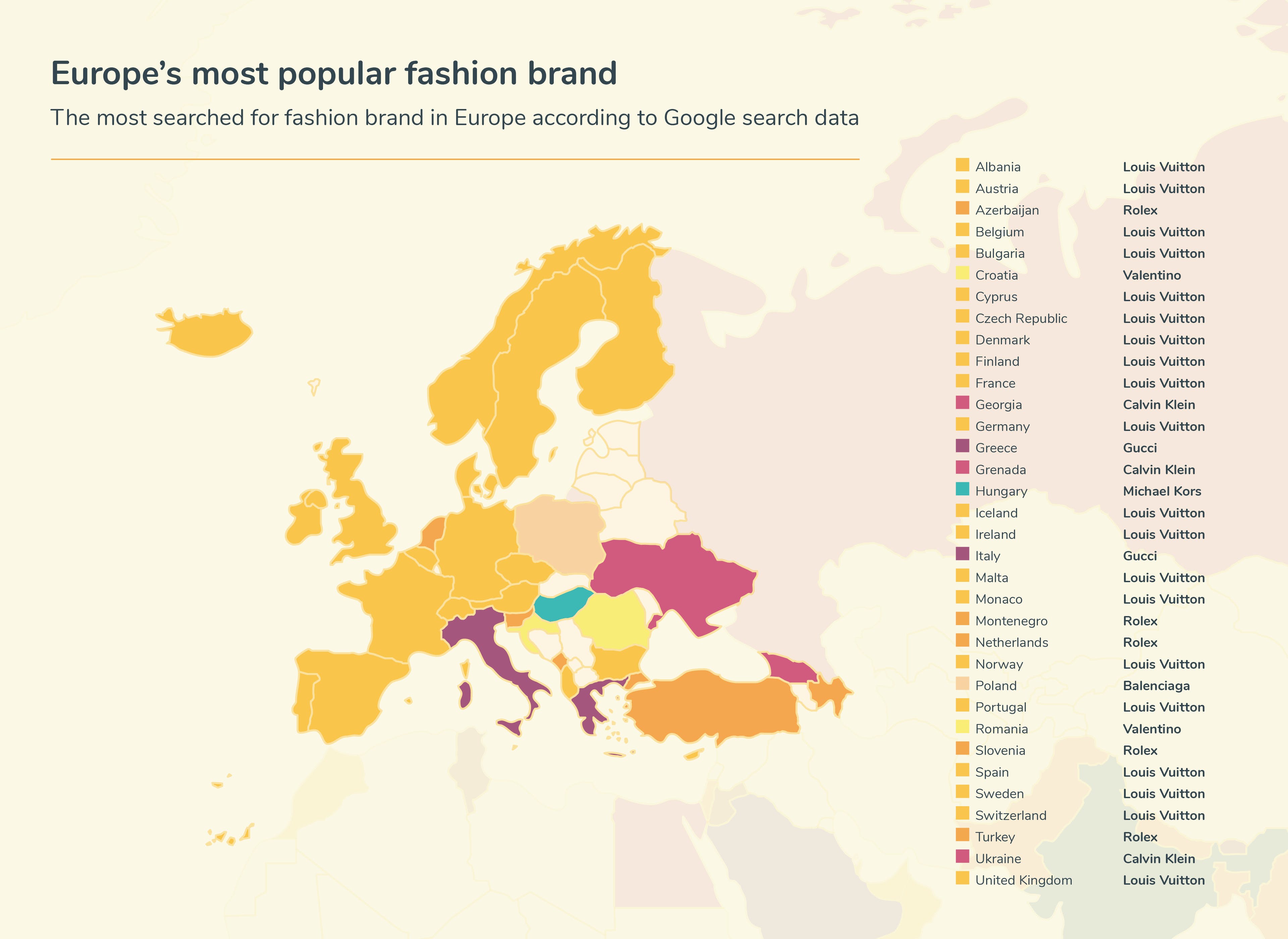 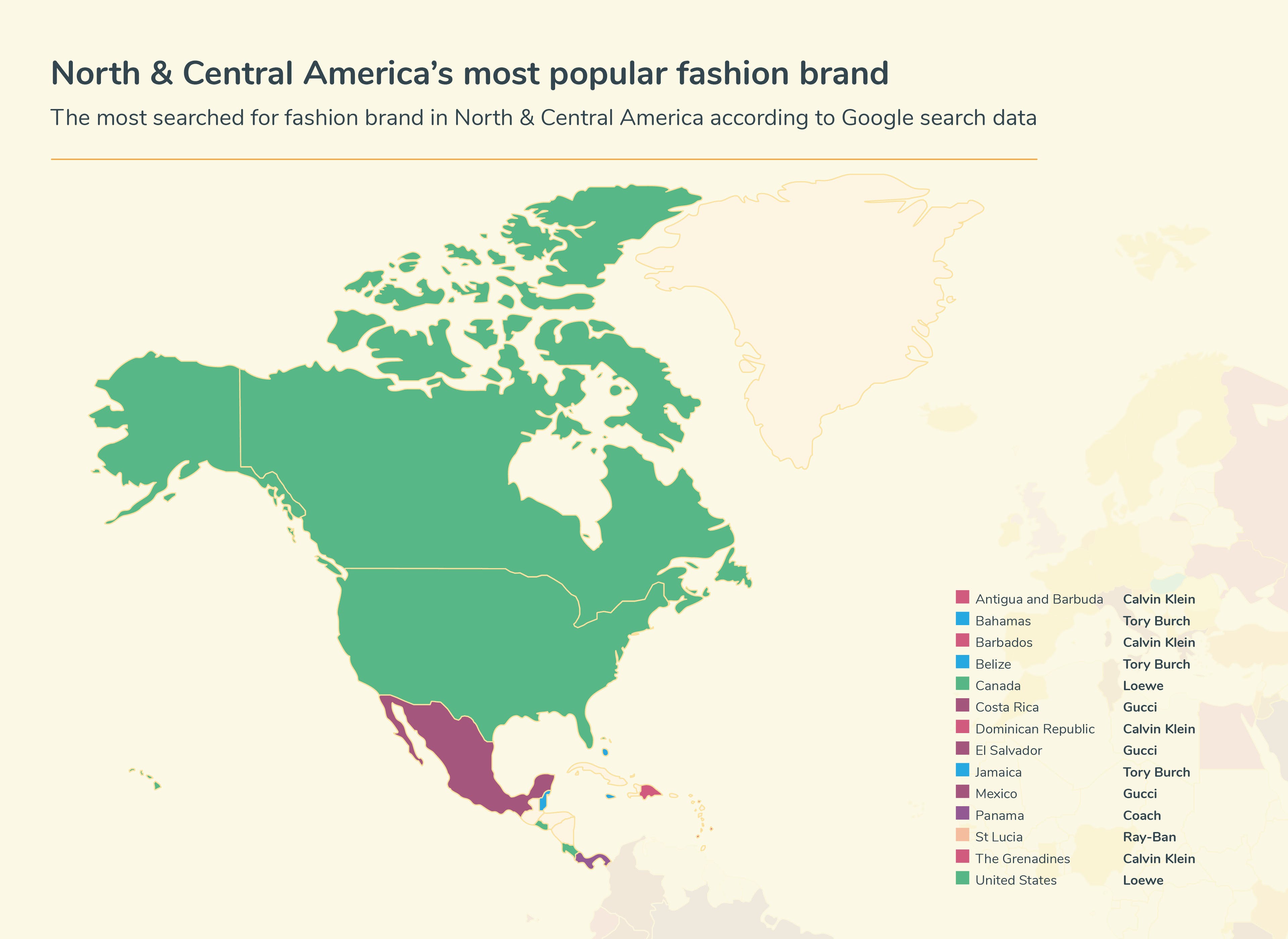 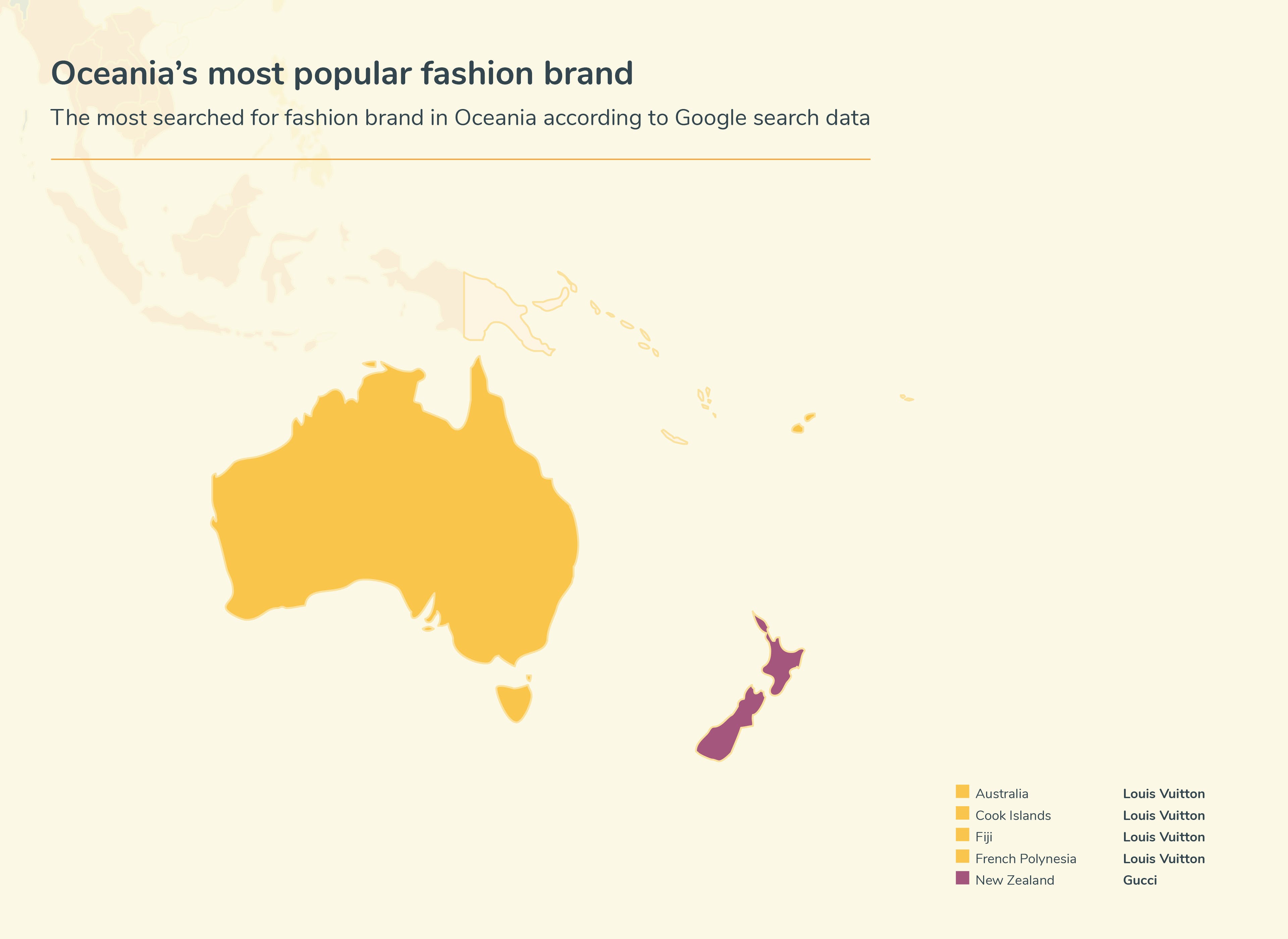 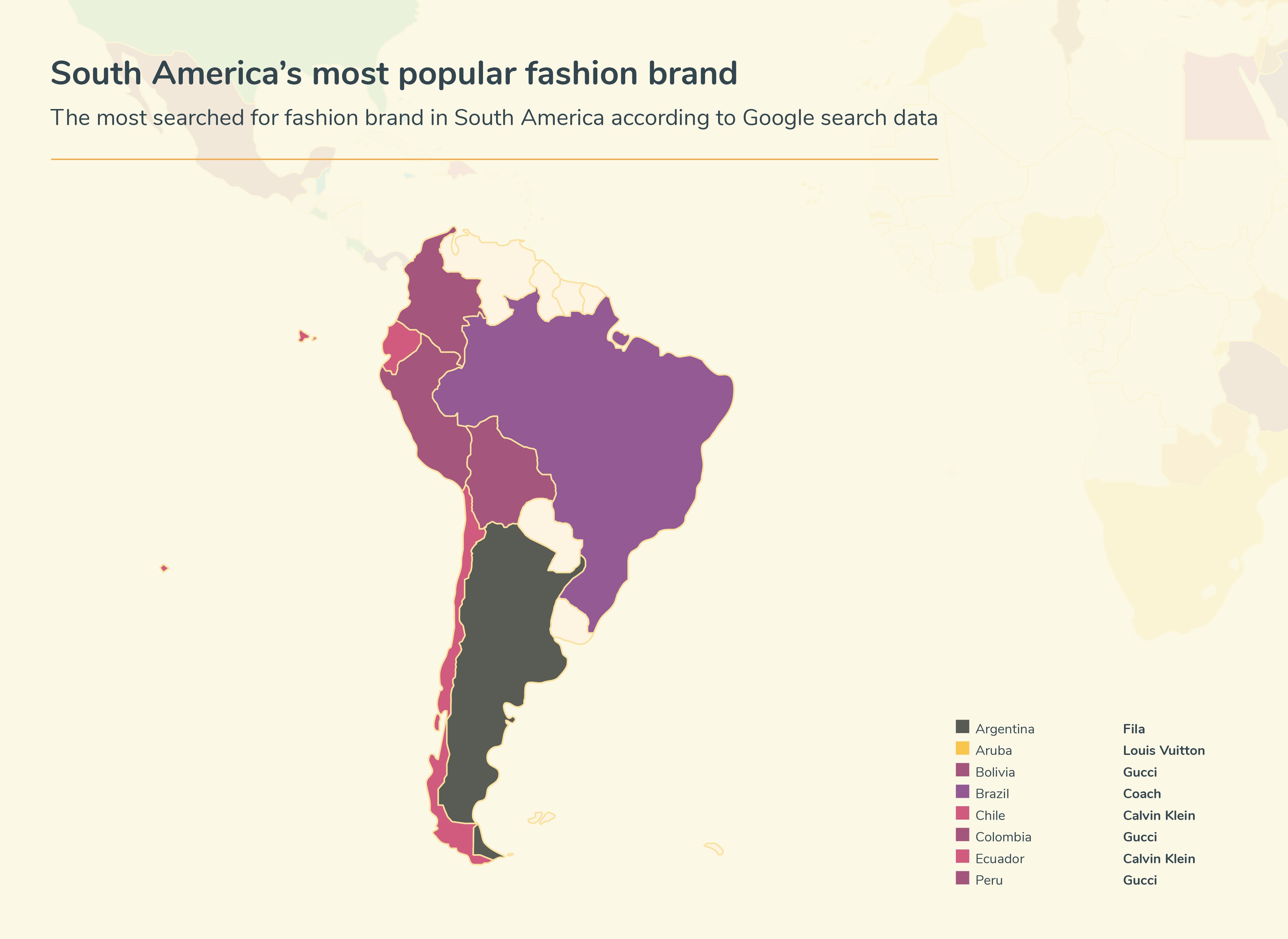 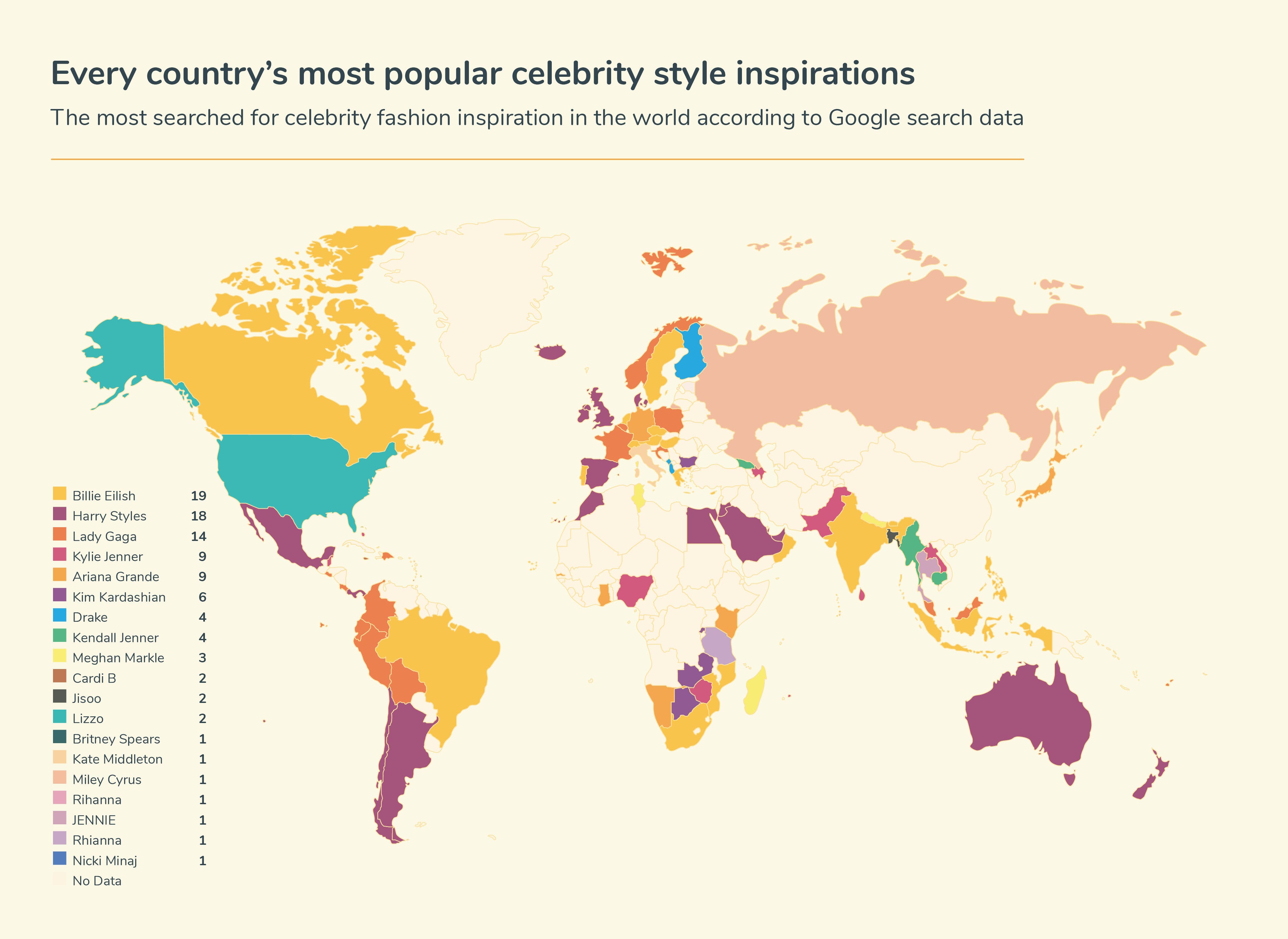 When it comes to putting an outfit together, we often look to others to find inspiration and usually it’s those in the spotlight who influence our fashion choices the most.

The number one worldwide celebrity fashion inspiration was found to be American singer-songwriter and pop superstar, Billie Eilish. Having recently been announced as Spotify’s most streamed female artist, our research shows that it’s not just her vocal talents that have picked up recognition. Famed for her oversized clothes and anything-goes ensembles, she pips the likes of Harry Styles, Lady Gaga and Kylie Jenner to the top spot.

Styles, who narrowly misses out on being crowned the number one international celebrity style inspiration, was one of only two male celebrities to feature on the list. Harry’s flamboyant style is praised for pushing gender boundaries, with his floral blouses and flared trousers often being hailed as the stand out fashion moments at award shows.

Another popstar to feature in the list, Lady Gaga has reinvented her style time and time again, with her creative expressions certainly not limited to her music. Iconic style moments from her reign as one of the most talked about fashion icons include donning a dress, hat and shoes made entirely out of raw beef, attending the VMAs as her male alter-ego Jo Caldrone and wearing a red latex bodysuit to meet the Queen. 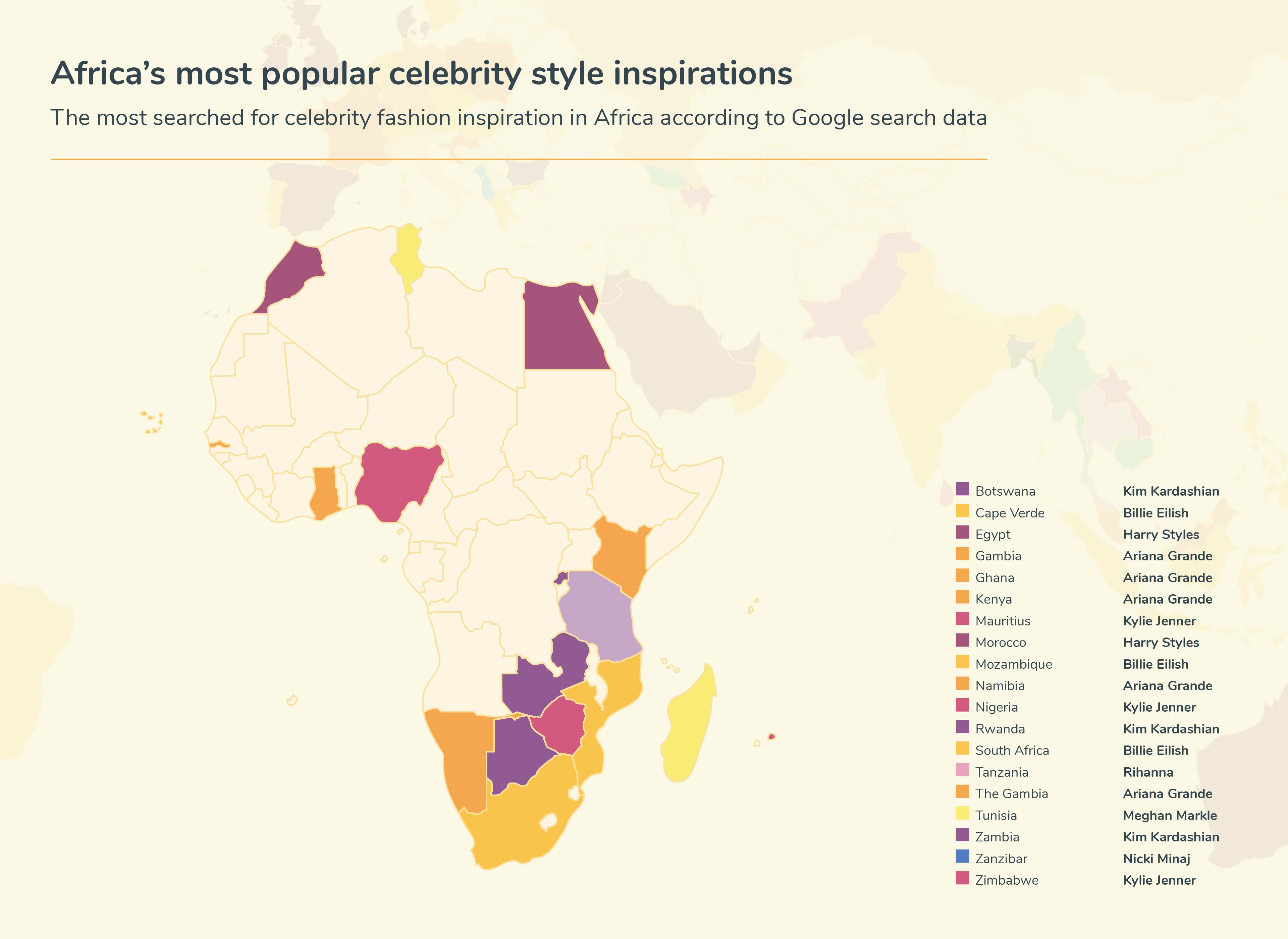 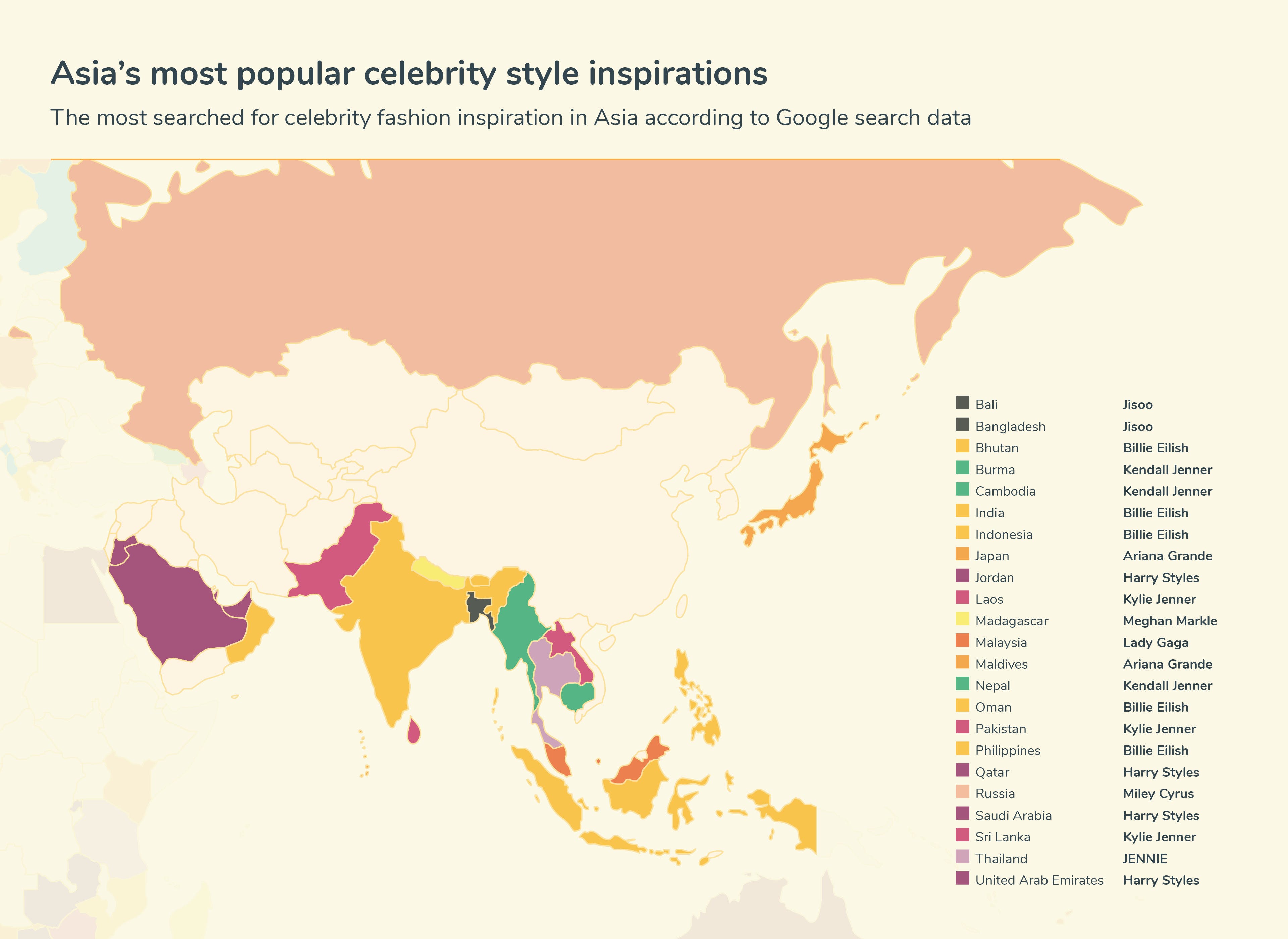 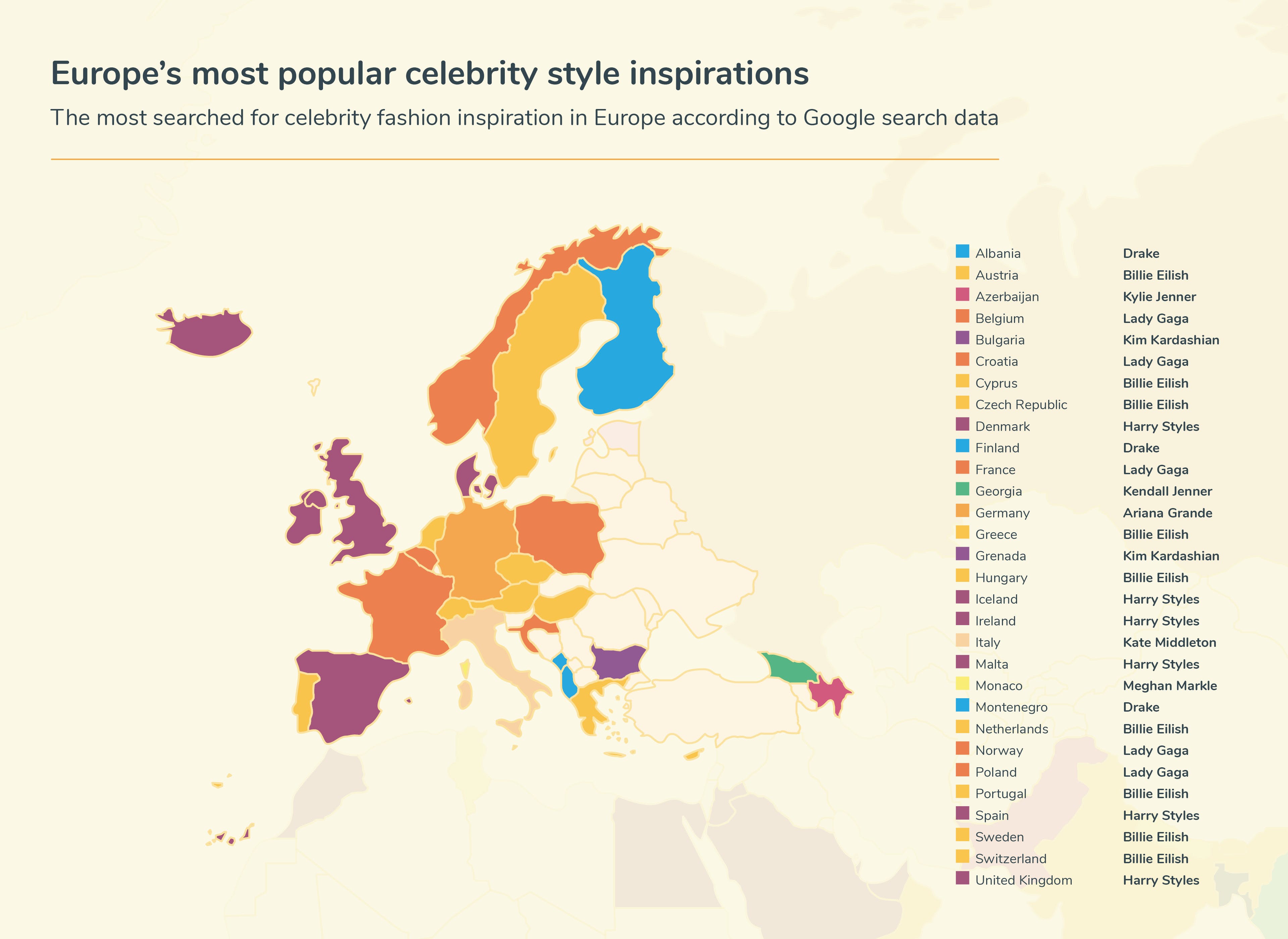 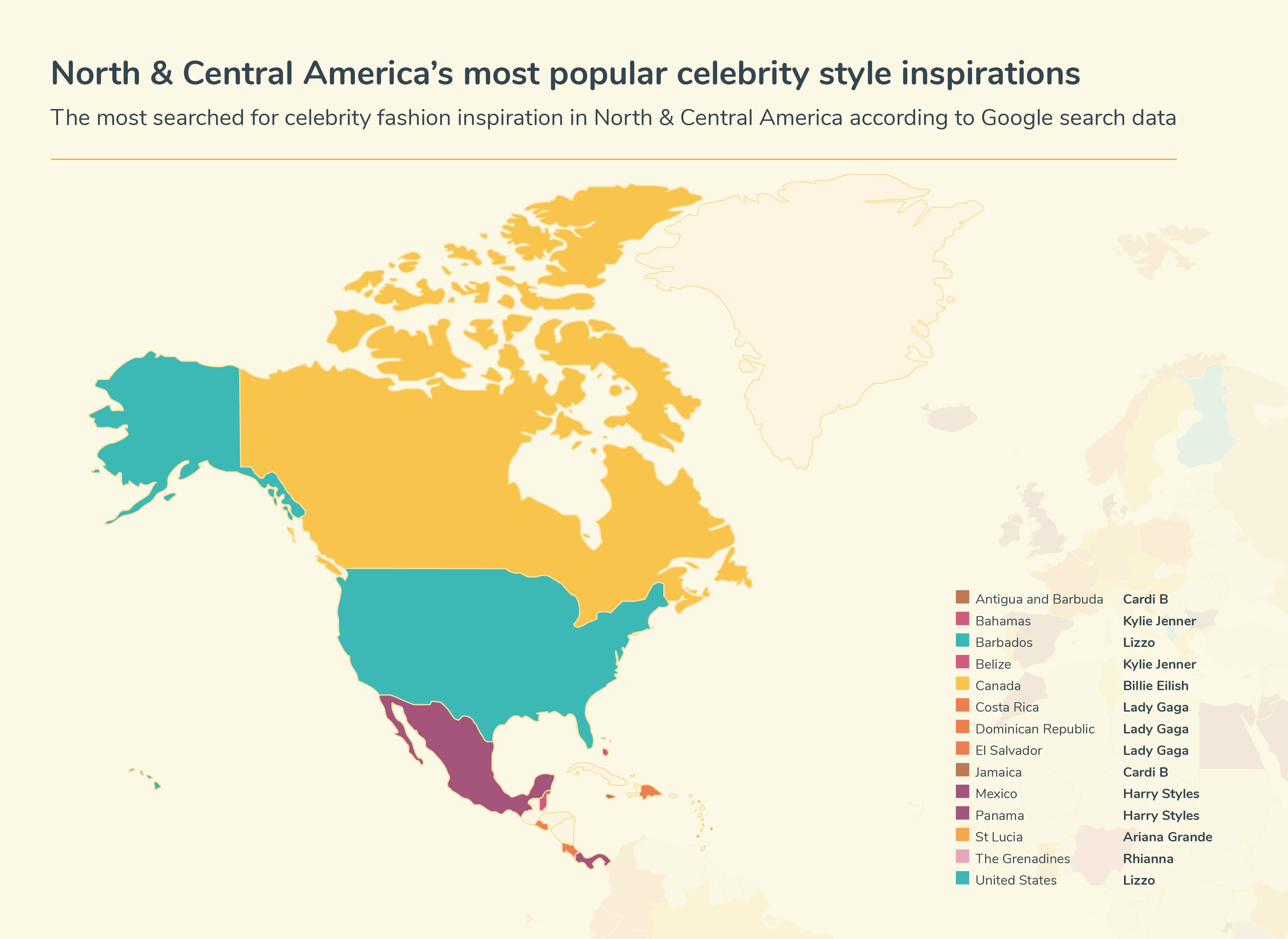 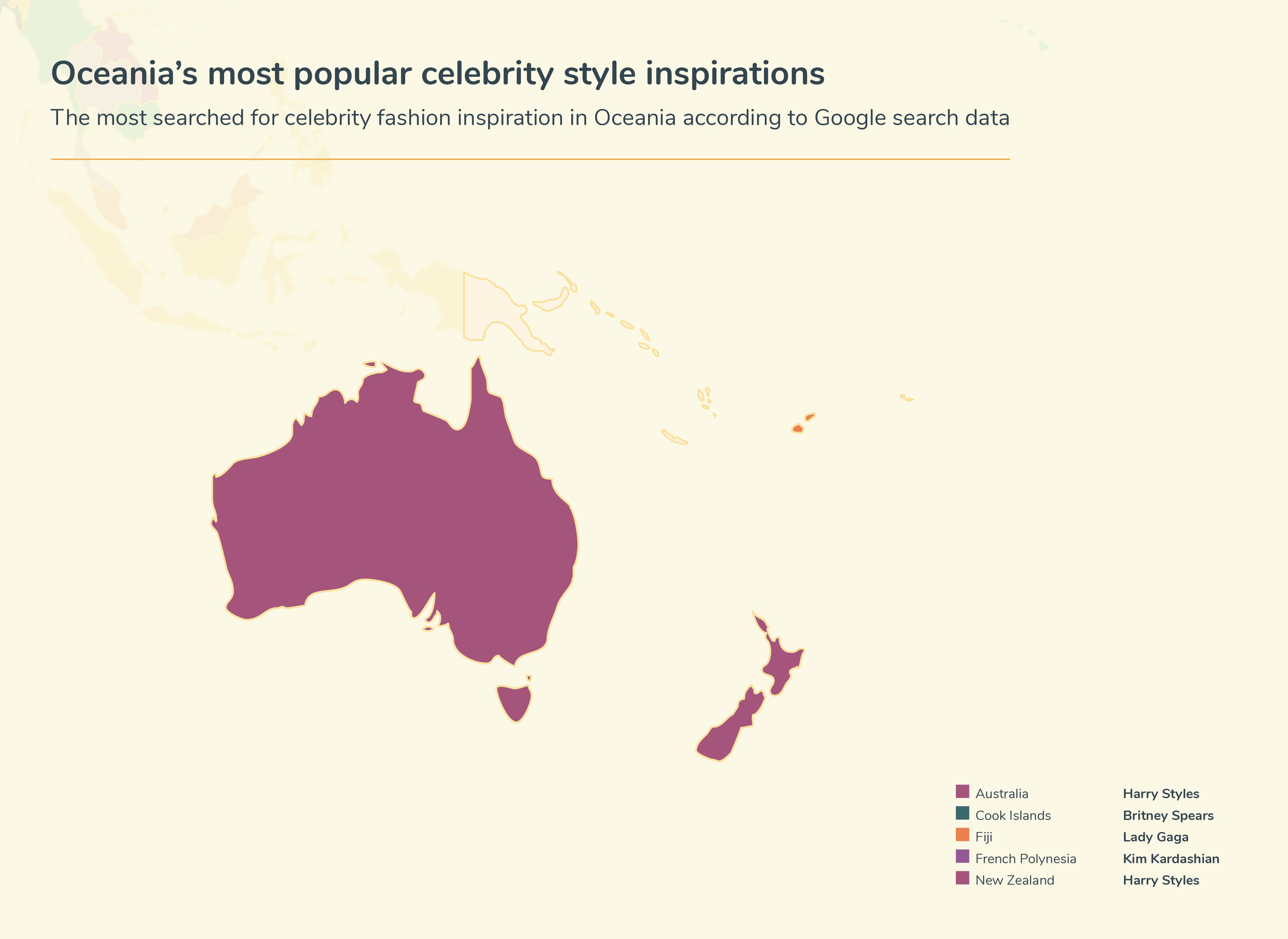 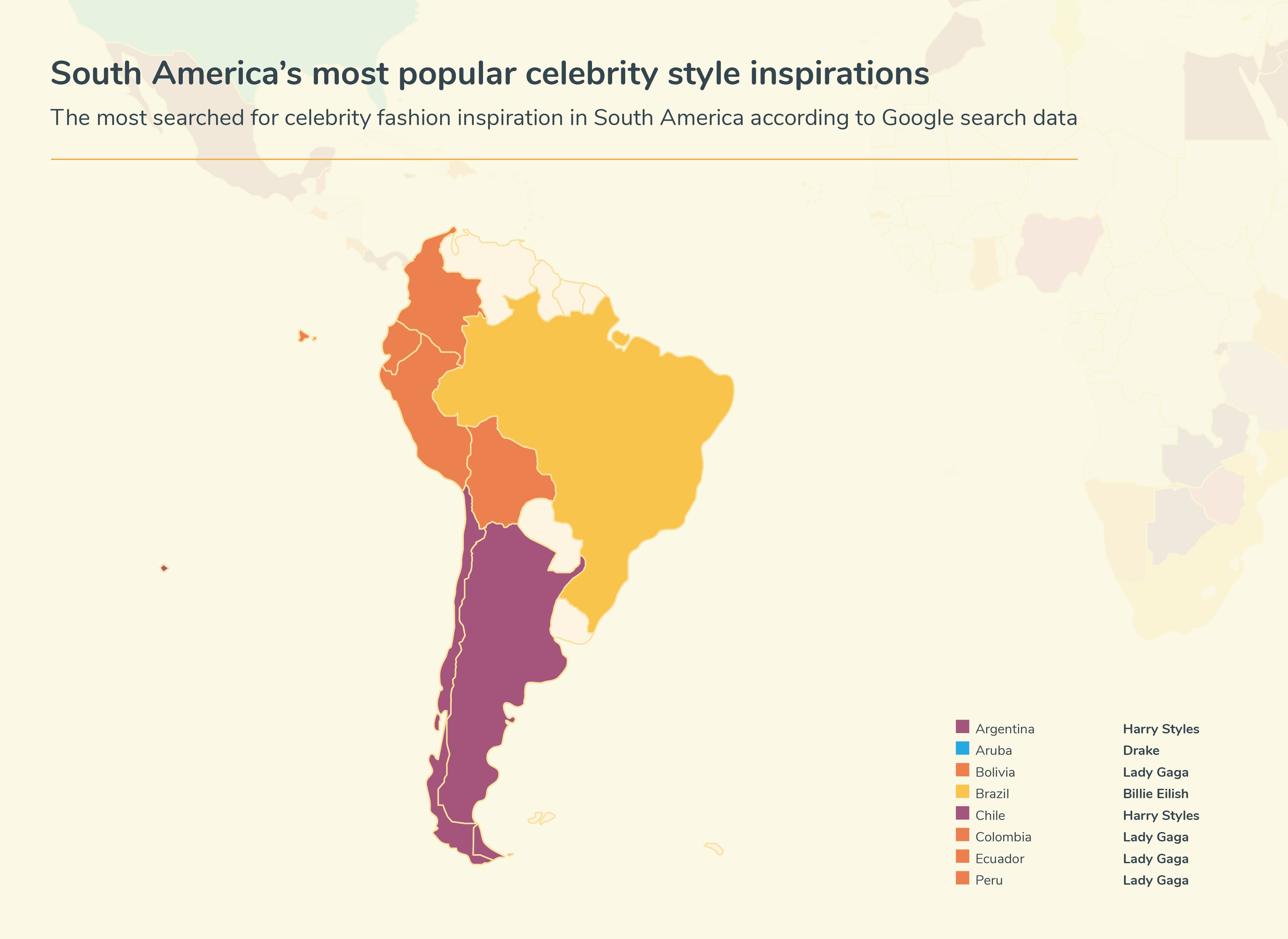 If you are looking to make some sartorial investments, you could consider taking out a 0% purchase credit card. You can then choose to pay off the balance of your credit card straight away, or in monthly instalments.

Top brand was found using annual search data in each country for each brand.

Top celebrity was found using annual search data in each country for “[Celebrity]” + “outfit”. The word “outfit” was translated into the appropriate language for the country analysed.