For most of us, our postcode is just the thing the postman uses to deliver our mail. They started way back in the 1800s in order to divide up growing cities, with London, Liverpool and Manchester some of the first to introduce the system. By 1974, every home in the UK had one, helping the 14.4 billion letters delivered every year find their intended destination.
Share this guide

However, with so many of us needing a postcode and only 26 letters to go around, some of us got luckier digits than others.

We look at which postcodes impact your house price the most, with some codes adding big money to your mortgage, while others simply cause a laugh.

If you are moving home and have found the perfect postcode, compare mortgages to find the best deal for you.

We never really grow up, do we? A combination of letters that looks a little bit rude will make us smirk just as much now as it did when we were kids, and these postcodes certainly put smiles on our faces. 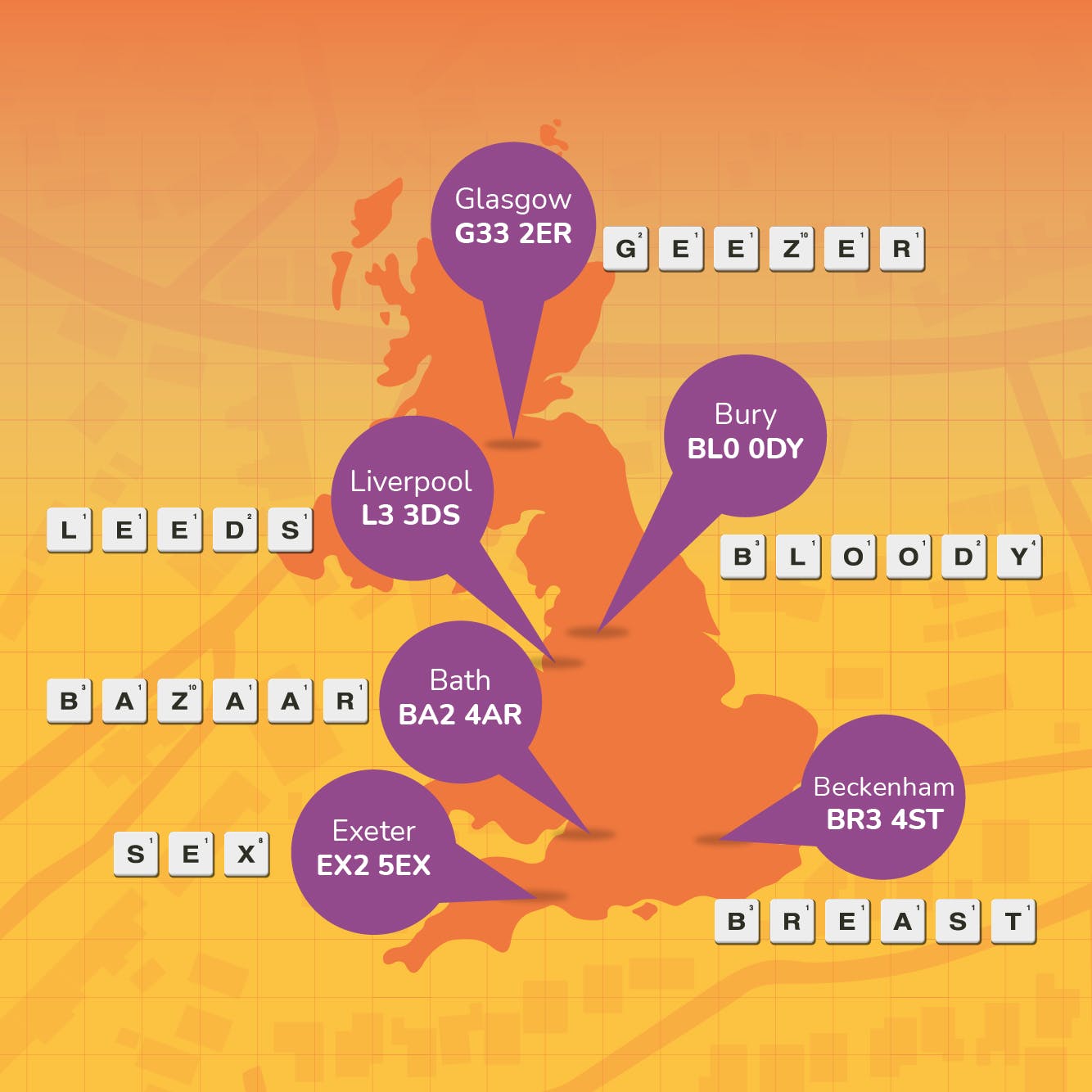 Sex isn’t as popular everywhere though. In Loughborough, the postcode LE11 5EX sees homes sell for an average of £226,696, and while that is an increase of 8.76% compared to this time last year, it’s 28.05% less than what you could get for the average house in the UK.

Breast is best - homes in Beckenham go for 53.2% more than national average

Looking to buy in the area of BR3 4ST (BREAST)? You can expect to spend big money on your property. Homes on Birkbeck Road go for an average price of £482,663 - a 7.15% increase over the last 12 months. The Kent suburb of Beckenham is a great place to bring up a family, with huge homes offering more than just a postcode likely to cause a snigger amongst the less mature of your friends.

Teddington postcodes have a sweary surprise

London postcodes are regularly some of the most expensive on the market, and that’s no different in the south-west suburb of Teddington. Homes there sell for around £892,903, a whopping 183.41% above the national average, and give you access to both the city lights and the beautiful Middlesex countryside.

It’s not just a financial cost you’ll have to pay though. The TW11 1AT postcode looks a little close to the bone, and may draw the occasional comment from your affluent neighbours.

While postcodes were designed to make places easier to find, some could easily send you in the wrong direction with letters spelling out places miles away from home. Sorry gran, your birthday card got horribly lost in the mail.

The L3 3DS postcode might not be where you think

You might be forgiven for expecting residents of St Anne Street to have a thick Yorkshire accent, but the postcode of L3 3DS (LEEDS) actually sounds a lot more Scouse. The Liverpool street is one of many that sounds like it should be somewhere else, joining the likes of ST4 1NS (STAINS), a street in Stoke and not along the River Thames, DE5 3RT (DESERT), Ripley, a picturesque town in Derbyshire with more streams than sand, and PR4 6UE (PRAGUE).

Nope, it’s not the capital of the Czech Republic, it’s a road in Preston.

Other postcodes don’t necessarily sound like places, but they do conjure up an image of a place you might not fancy going. BL3 4RY (BLURRY) in Bolton might be a hard location to see, BL3 3DS (BLEEDS)  just along the road sounds a little nightmarish, while HA5 5LE (HASSLE) - just south of Watford - could be tricky to get to. 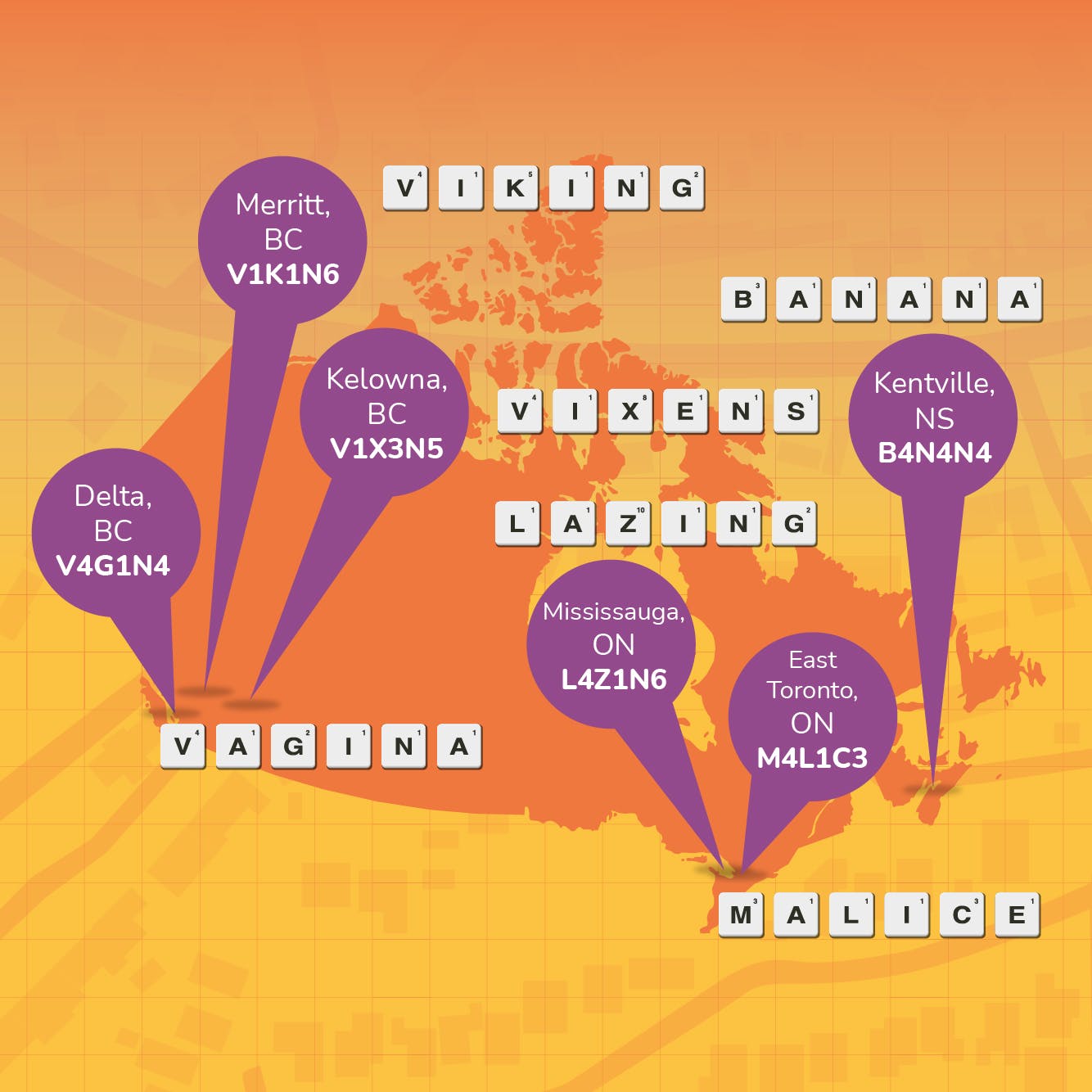 Brits don’t get to have all the fun. In Canada, postcodes work in a similar way, using a six-digit string of numbers and letters to create the final outcome.

For us, that makes for fun.

Head to Timmins, Ontario and you’ll find the postcode P4N1C5 (PANICS), not at all fitting for an area of natural wintery beauty. But it could be worse.

M4X1M5  (MAXIM) is more associated with a noughties lads mag in the UK, not the vibrant area of downtown Toronto that Canadians know it as, while we can’t imagine it’s easy to sell a new build in R3L1C5 (RELICS), Winnipeg.

However, the area of Canada that easily takes the title for most unfortunate postcode has to be a street in Delta East Central. While we all start life in one, we’re not sure how we’d feel about moving back to V4G1N4 (VAGINA).

The UK postcodes seeing the biggest climb in property price

While COVID-19 might have seen a negative impact on many industries, the property market in some areas has remained encouragingly strong. With people able to save more than ever, and working from home showing us how valuable space and comfort can be, people have been moving en masse, taking house prices up along the way. 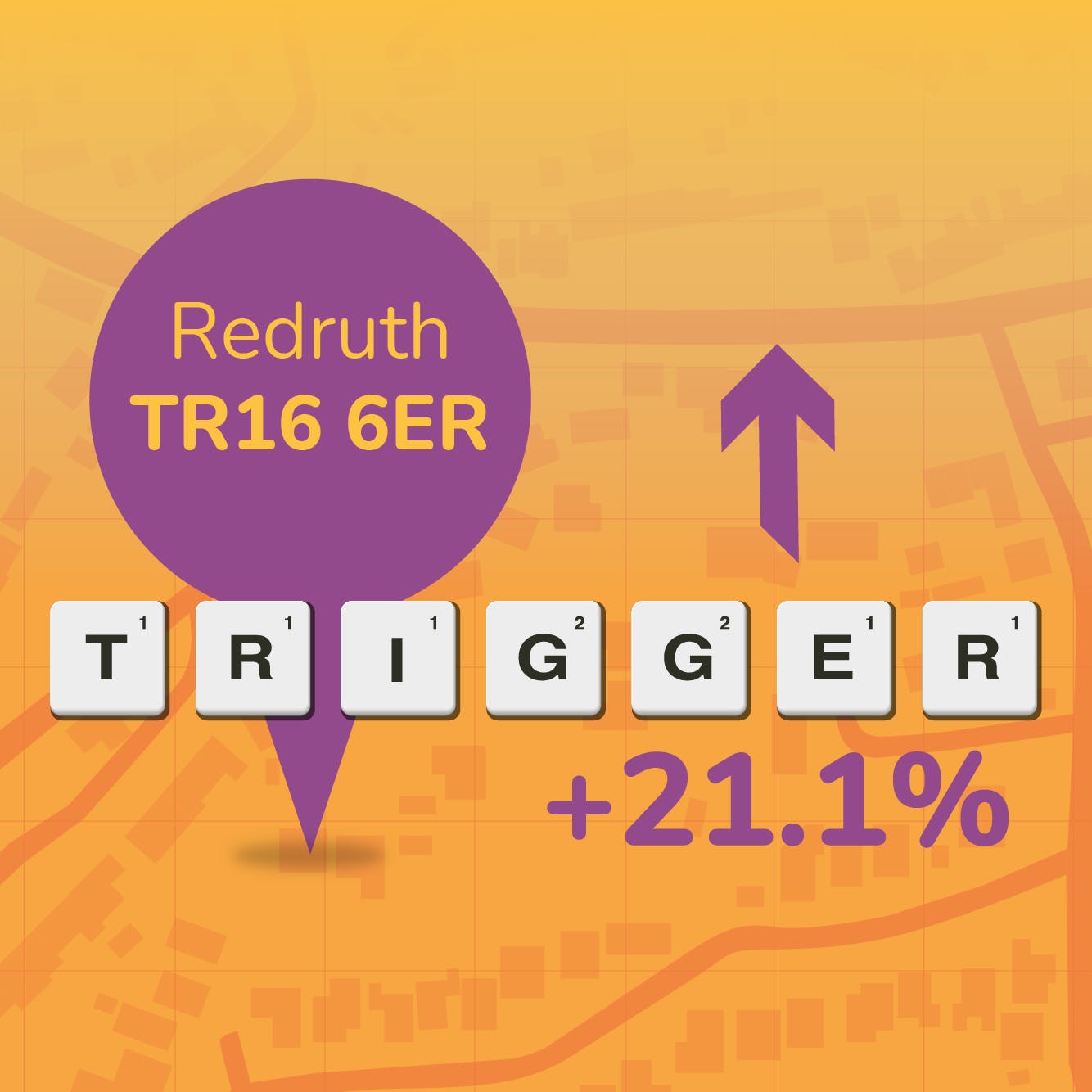 The market town of Redruth in Cornwall has seen the highest climb in house prices over the past year. Just a 12 minute drive away from the stunning Cornish coast, Redruth homes have gone up in value by 21.12%, taking their average price to £305,734. While this is still slightly lower than the UK average of £315,059, it shows things in the area are moving in the right direction, as the TR16 6ER (TRIGGER) postcode starts to cash in on its prominent position.

Newquay has witnessed a 16.43% boost in property value

Another coastal resort takes second spot, as surfers’ paradise Newquay sees house prices in the TR7 1NG (TRYING) region go up by a huge 16.43% in value. The town has long been a holiday haven, with incredible views, breathtaking waves and more than your fair share of fish and chips drawing people back every summer.

Bolton properties are now 13.60% more expensive than they were

Houses in Bolton are still available on the cheaper side, but not quite as cheap as they used to be. The average home with the BL1 6HT (BLIGHT) postcode goes for £212,341, having seen a 13.60% rise throughout the Covid pandemic. This is still 32.6% lower than the UK average, meaning there are bargains to be found in this great Manchester commuter town.

The top UK 10 postcodes on the up

Bargain postcodes: the areas you can live in for less

Some postcodes can see you save hundreds of thousands of pounds, with homes up for sale at a fraction of what you could find elsewhere. While the areas might not scream glamour, they do scream financial savviness, and if you invest now, who knows how much you could be selling for in the future? 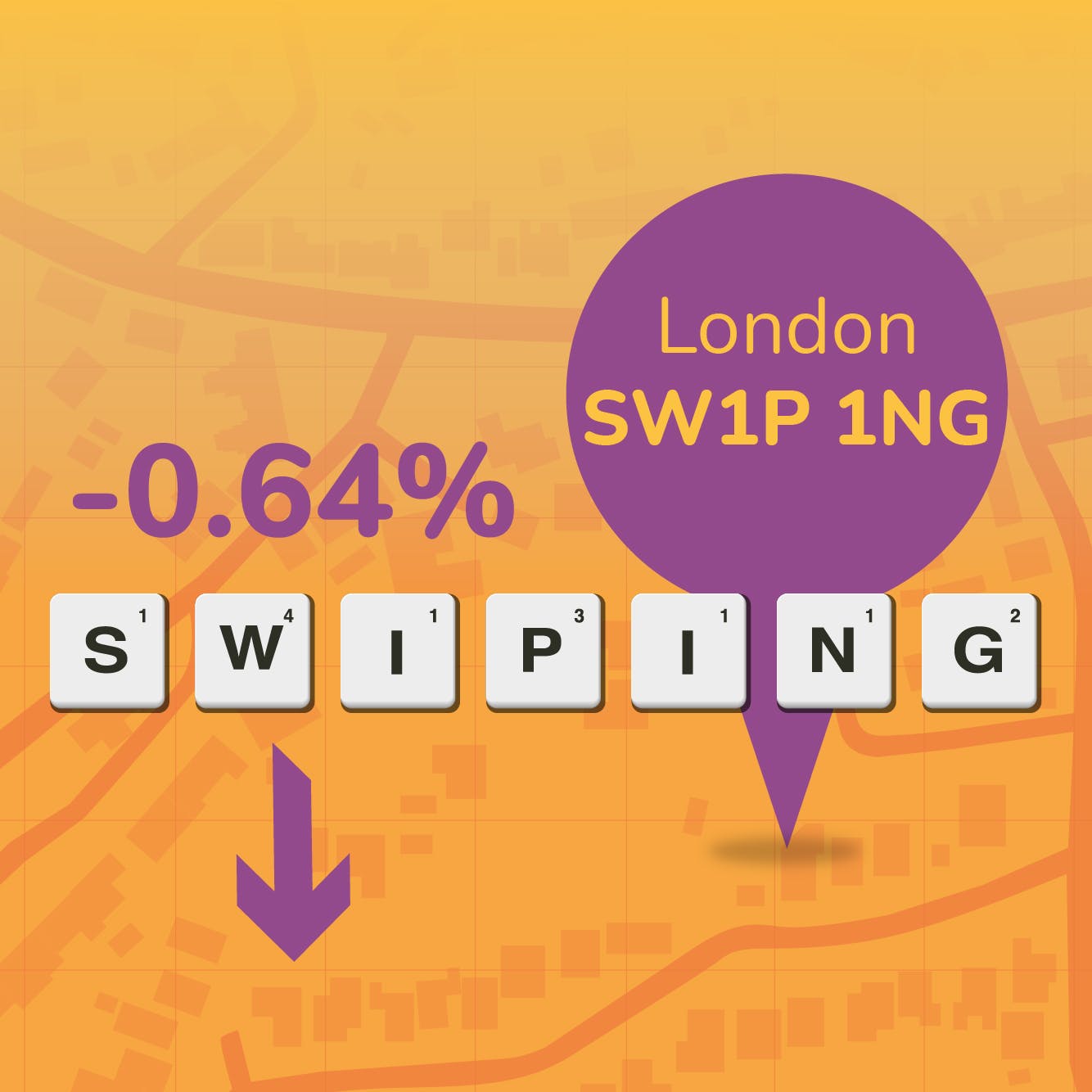 Coming in at 86.84% less than the UK average, a home in Peterlee, County Durham, could be yours for only £41,462, giving you easy access to neighbouring Hartlepool and Sunderland. The town is left a little under the radar compared to its larger Teesside counterparts, but with such opportunities right on your doorstep, you could find a great commuter home in AL1 5HA (ALPHA) for a lot less than you’d pay elsewhere.

Houses in Kilmarnock cost 83.8% less than rest of UK

Head up to KA1 5ER (KAISER), Kilmarnock, and make huge savings on a Scottish home. Costing a mere £51,044 on average, Kilmarnock houses are surrounded by historical buildings and intriguing architecture, and are only a 35 minute drive away from the vibrant city of Glasgow.

At 83.8% less than the UK’s average house price, a home in Kilmarnock could see you earning the Glasgow pay-check without paying city prices. Bargain.

Famed for its rugby club and proud Merseyside heritage, St Helens is a bustling town right in between Liverpool and Manchester. The WA9 1NG (WAGING) postcode only costs an average of £63,842, making it 79.74% cheaper than the average UK property while offering great transport links to bigger, metropolitan neighbouring cities.

The best postcodes for saving the pounds

Are you looking for a new postcode of your own?

If you’ve had enough of your current postcode (whether it’s because of a silly name, or you just fancy a change), we can help you find the best mortgage deals on your new home. Compare our top offers from a range of providers, and see how much you could save on your next move.

Using Ordinance Survey open data, this was scraped for where the 'unfortunate postcodes' are. From looking at a list of the postcodes all across the UK, we could then understand how much the average house price is for that postcode, with a 12 month % change for its value using data from Zoopla. This data was then compared against the average property price in the UK as a whole. A similar method was used by scraping the postcodes of Canada, to highlight potential spellings amongst them.