Thanks to the current property boom, demand for houses in the UK is at a record high. The decision by the UK government to temporarily cut stamp duty last year fuelled an influx of house purchases, as well as lockdowns making many of us itch for a serious change in scenery.
Share this guide

Anyone on the hunt for a new home knows it's a weighty investment, but are there any factors we’ve been missing when it comes to improving a property’s value?

Before looking to purchase your new home you should compare mortgages to understand how much you can afford to borrow.

We all know the obvious stuff, like transport links and good schools, but have you ever given a thought to your street name?

We’ve looked at street names that have been inspired by iconic stars from sport and film to royalty, and  compared the prices of neighbouring houses to those on celeb streets. By doing this we were able to find out if living on a ‘celebrity street’ could give you more bang for your buck when valuing your property.

We’ve calculated the average house price and change in property value over time and found that celeb streets are on average 2.6% more expensive. From royals to rockstars, find out which street names you should be keeping an eye out for when making your next move, and don’t forget to check out our mortgage comparison tool to get you the best deal. 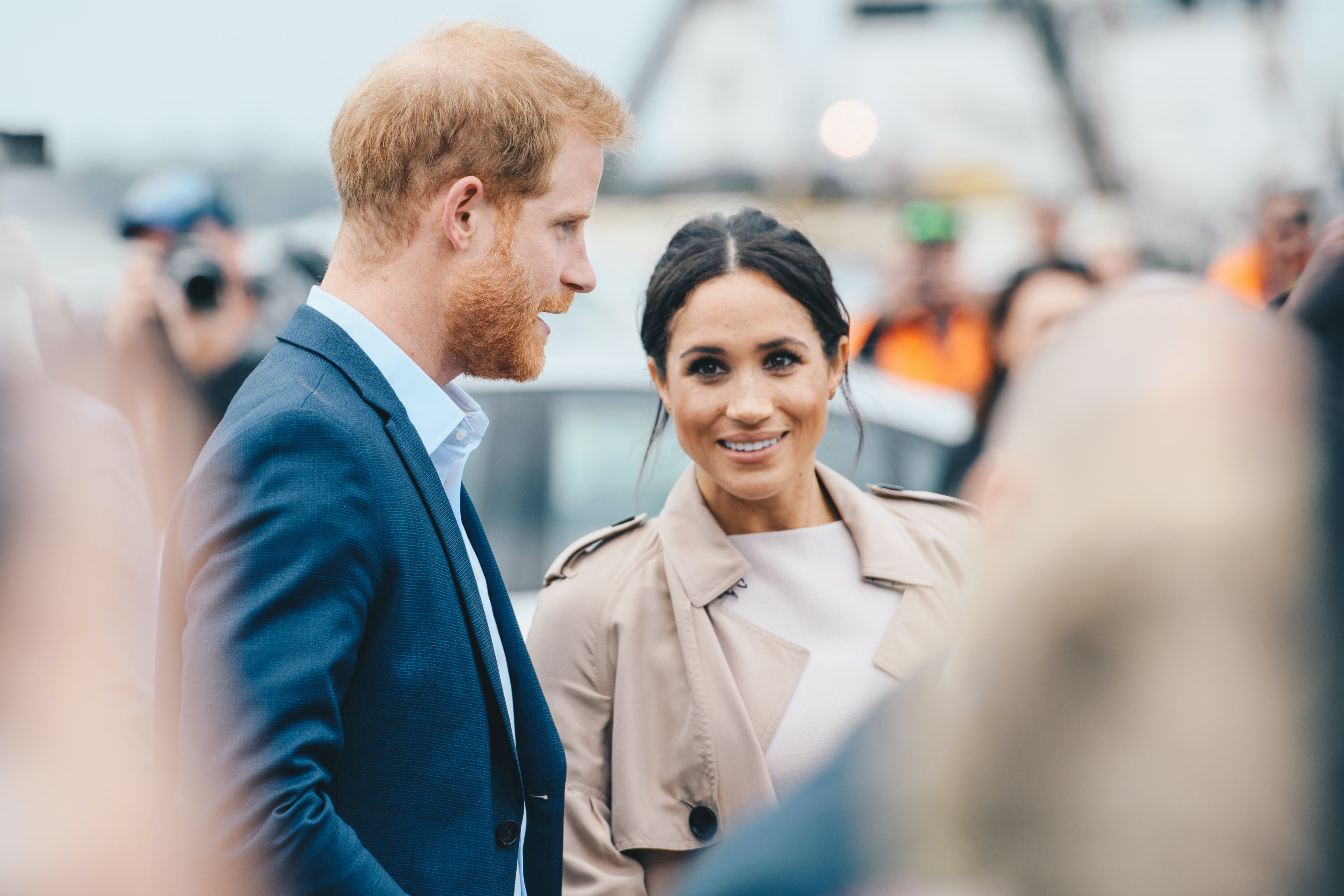 The British royals are one of the most famous families in the world,  so it’s no wonder that living on a regal road name will give your house price a boost.

Living on Prince Harry Drive in Orlando, USA for example, could increase the value of your home by a whopping $129,500, that’s a 26.5% rise compared to neighbouring streets. Back across the pond, the Brits don’t seem to be as impressed, as Prince Harry Road in Warwickshire, England actually saw house prices fall by 14.2%. Was it something he said?

Meanwhile, Prince William Close and Queen Elizabeth Drive are still in the good books, as they’ll both give you that royal lift. The residents of Prince William Close in Worthing will be enjoying a 9.2% rise on their property prices, that’s an extra £47,600 in their pockets. Surprisingly, those on the drive named after Queen Liz in Swindon only get a 4.6% increase in value, but that’s still an impressive £12,400 compared to neighbouring streets.

Additionally, it appears that the ‘people’s princess’ Diana is still beloved by the nation. With two streets in her name, houses on Lady Diana Drive in Reading are selling at an extra £35,400 above their neighbours, while those on Lady Diana Court, Hampshire earn almost an extra £50,000!

Living on George Harrison Close could add £28,000 to your house price 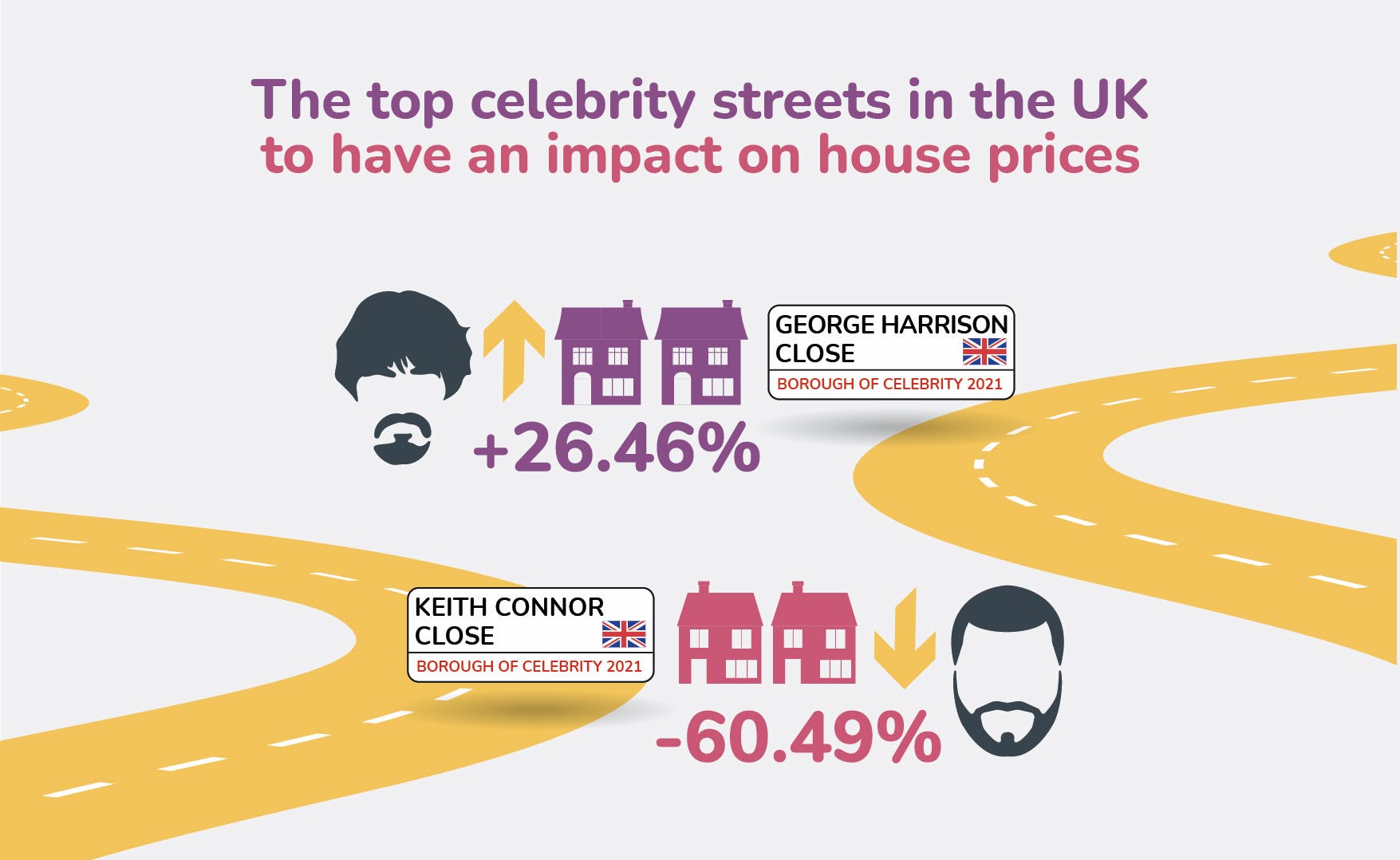 Going back to their roots, four streets in Kensington, Liverpool have been named after the iconic members of The Beatles. We found that with a little help from our friends John, Paul, George and Ringo, house prices on their namesake streets were a healthy sum above the rest.

Forget about Penny Lane or Abbey Road, we found that living on George Harrison Close could increase your house price by an impressive 26.5%, meaning this street name had the biggest impact on house price out of all those in our study in the UK. Average house prices on these streets ranged from £111,000 to £137,000, but those close by only held an average of £108,400.

Residing on Paul McCartney Way for example would bump up your house price by over £13,500, that’s a 12.4% increase. Imagine if you lived on John Lennon Drive? That would mean an extra £7,000 at least, that’s 7% on top of your house price. Although, venturing across to Ringo Starr Drive would only get you around 2.8% more compared to similar houses. It’s not even that long and winding. 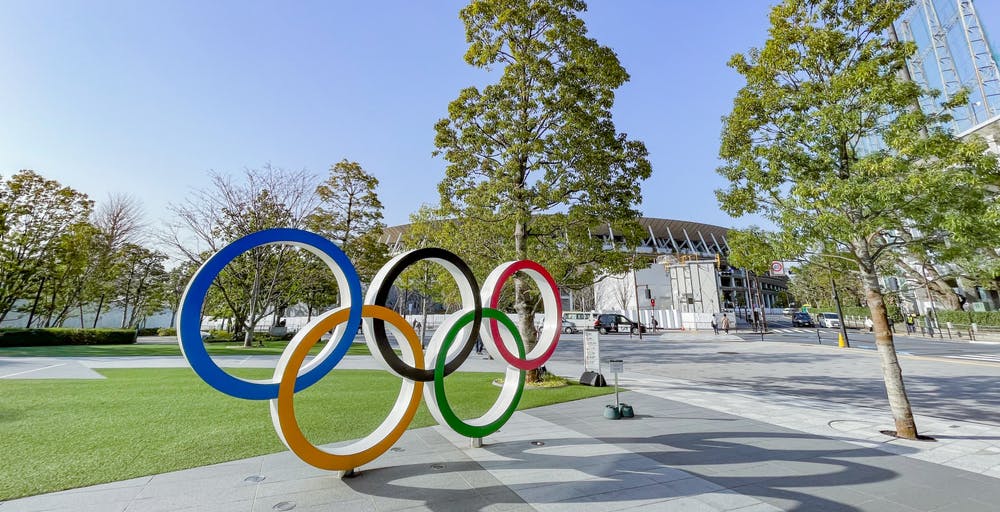 With the Tokyo 2021 Olympics well underway, all eyes are on famous athletes across the globe. Among the streets of London, UK we’ve found a number of streets dedicated to renowned Olympians.

Decathlete Daley Thompson is a world-record breaker and Olympic gold medalist hailing from London, England. Also known for his colourful personality, his popularity has fallen short when it comes to increasing value on Daley Thompson Way, where house prices are 2.5% lower. With houses on this street worth around £565,000 on average, that’s over a £14,000 dip, so homeowners on this street definitely won’t be taking home the gold.

Keith Connor was Britain’s leading triple jumper between 70’s and 80’s. He won bronze at the 1984 Los Angeles Olympics and gold medals at the European and Commonwealth Games in 1982. Amongst his long list of successes, he now has a street in his name, Keith Connor Close in central London, where average house prices are around £287,000. Even though Keith has a long history of winning, houses on this street could be losing 60.5% compared to their neighbours, the largest decrease in the whole of our study. 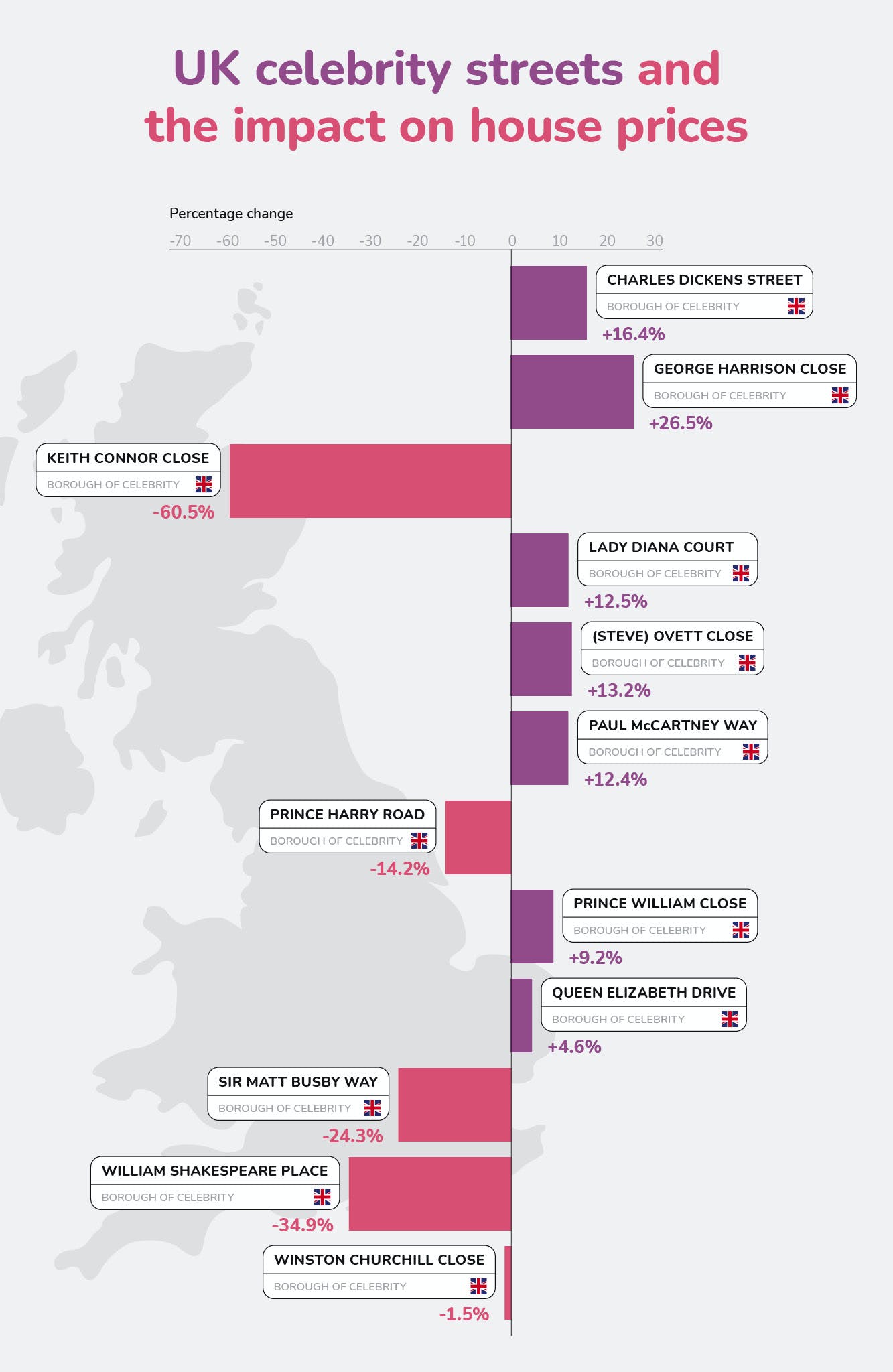 Although it’s good to know what celeb streets can improve your property value, we found some other famous figures that probably should be avoided.

To increase value or not to increase value, that is the question. Unfortunately, it’s the latter. You would think that living on a street named after the world’s greatest dramatist would help to spruce up your house price, but that doesn't seem to be the case. On William Shakespeare Place in Worcester, your house could be worth almost £129,000 less than those not far yonder on Falstaff Drive or Elgar Crescent, that’s a 34.9% price reduction.

From playwrights to politics, we also found a street named after one of Britain’s most well known Prime Ministers, who led the way to victory during the Second World War. Winston Churchill was born and raised in Oxford, England, however Winston Churchill Close is actually situated in the small town of Hessle, Yorkshire. To buy a house here, you’d be paying around £147,200, but that may not be the best vote, as houses close by are selling for £149,100.

Staying within the north of England, the next celeb street to avoid is in Manchester. Sir Alexander Matthew Busby CBE was a Scottish football player who then became a renowned manager for Manchester United Football Club. To celebrate his service to the club, Sir Matt Busby Way is situated opposite Manchester United’s grounds of Old Trafford. United fans may be sad to hear however that house value here is 24% lower and could leave them missing out on £75,500! 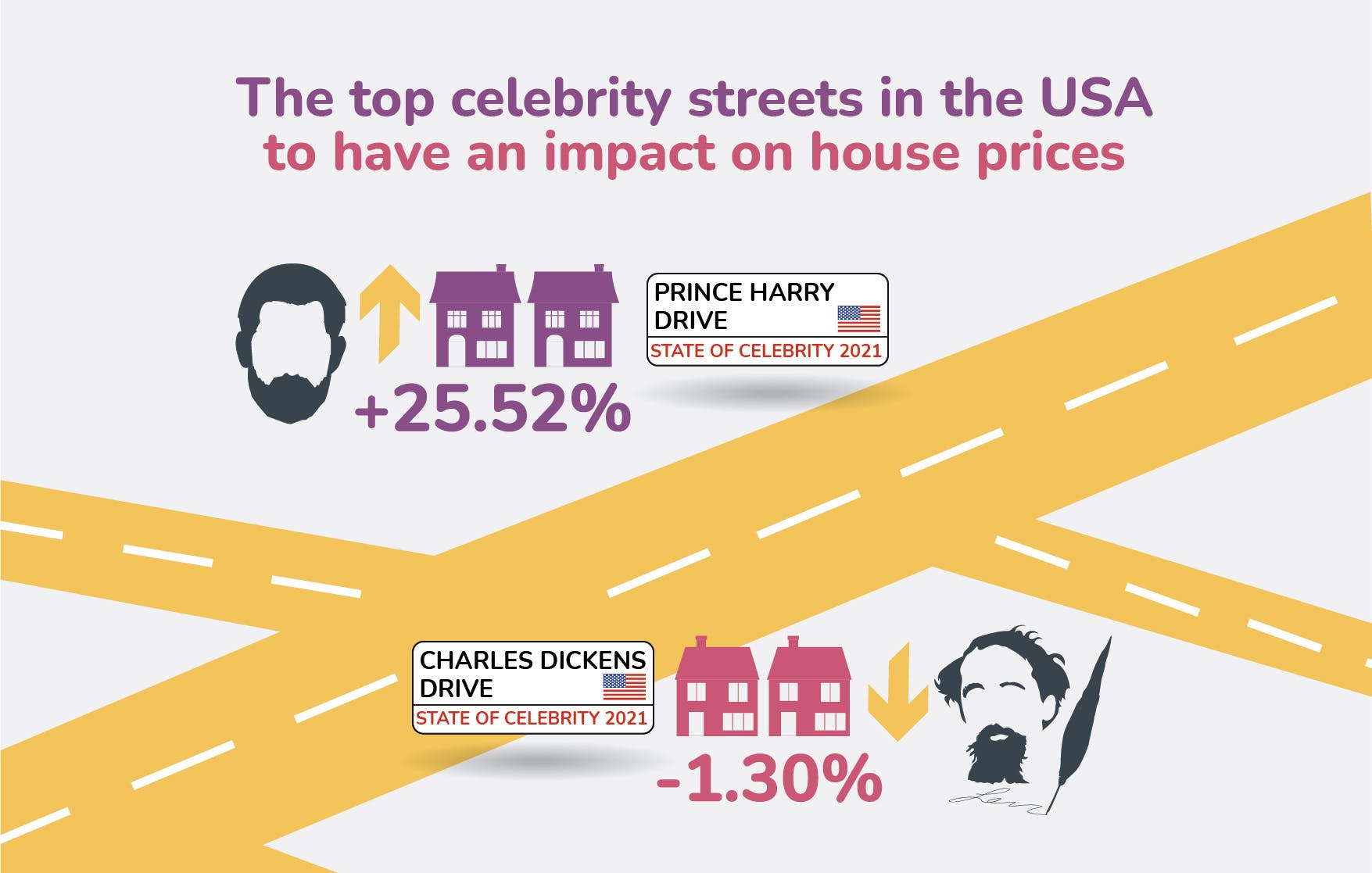 American A-listers: Houses on Barack Obama Boulevard are worth $42,000 more

Across the Atlantic, the USA has named a number of its streets after their biggest stars, but it hasn’t necessarily had the impact you’d expect.

Elvis Presley, the king of rock and roll himself, has a boulevard in his name, but we were surprised to find that prices along this stretch were only marginally affected by the star-studded street name, rising by only 1.7%. Star Wars fans out there will be equally as disappointed as Castleton Drive, San Diego saw only a 1.6% increase in price after it was given the honorary street name ‘Mark Hamill Drive’.

Despite being arguably one of the USA’s most popular presidents in recent times, living on Barack Obama Boulevard may only increase the price by 3.6%. Although given average house prices on this street are around $1,210,000,  that’s still a hefty chunk of cash (about $42,000 to be more precise).

Over in Las Vegas, houses on Tupac Lane are worth $342,000 on average. The road is named after the famous rapper Tupac Shakur, better known by his stage name 2Pac, who is commonly accepted as one of the greatest rappers of all time. It’s no wonder then that if you cross the road over to the neighbouring streets of Wildroot Road or Drummond Road, you’ll find the average house is going for just over $332,000, that’s £10,000 less than those on Tupac Lane. Nevermind guys, keep ya head up.

Many other famous faces have street names dedicated to them worldwide, such as musicians, TV presenters and industry moguls. Although they’re not all residential (or official in some cases), we thought we would give them an honourable mention as maybe they’re ones to look out for in future. These include: Beyonce Boulevard in Bermuda, Oprah Winfrey Way and Hugh Hefner Way in Chicago and Frank Sinatra Drive, New Jersey. 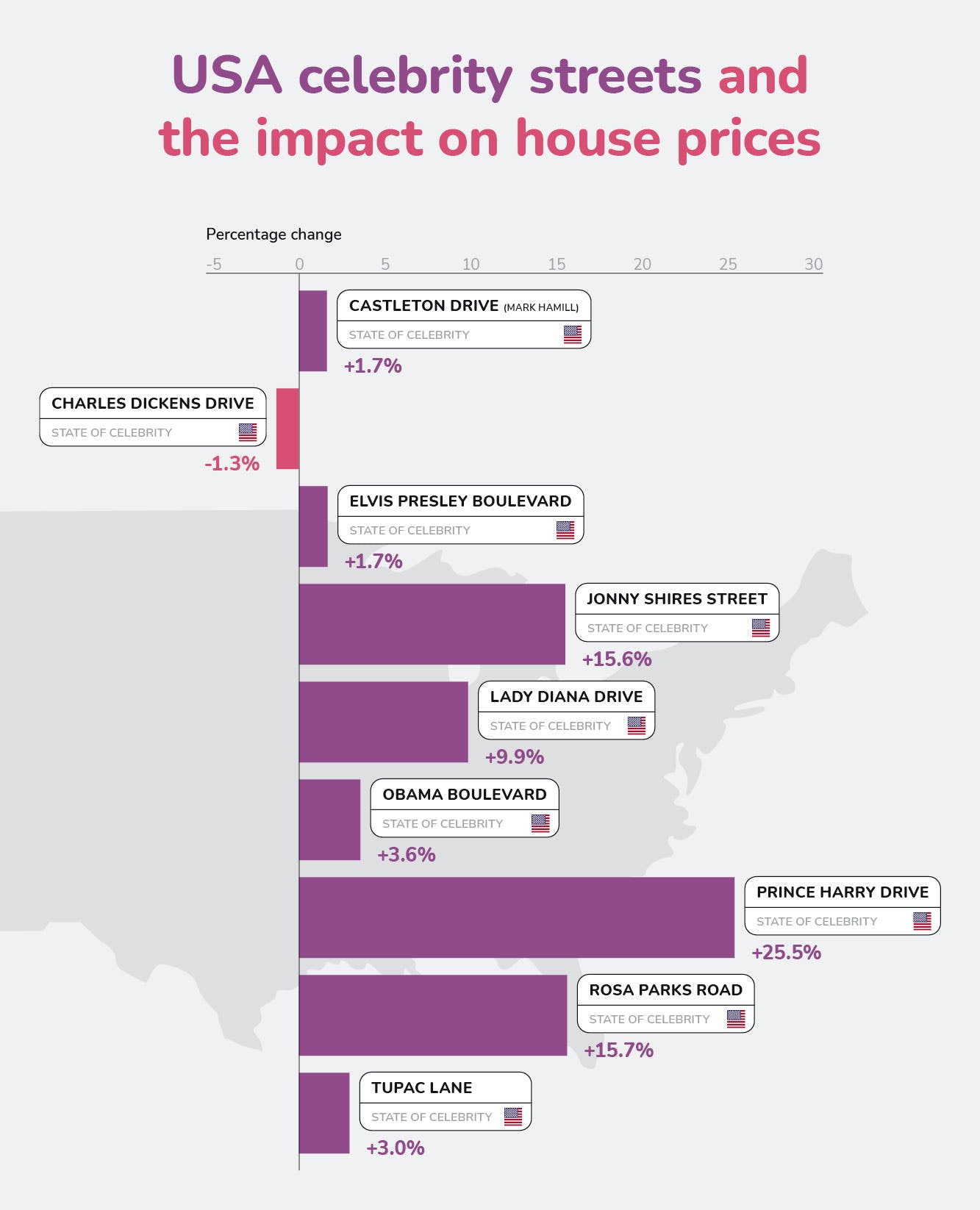 Despite larger rises, on average the US has more expensive celeb streets 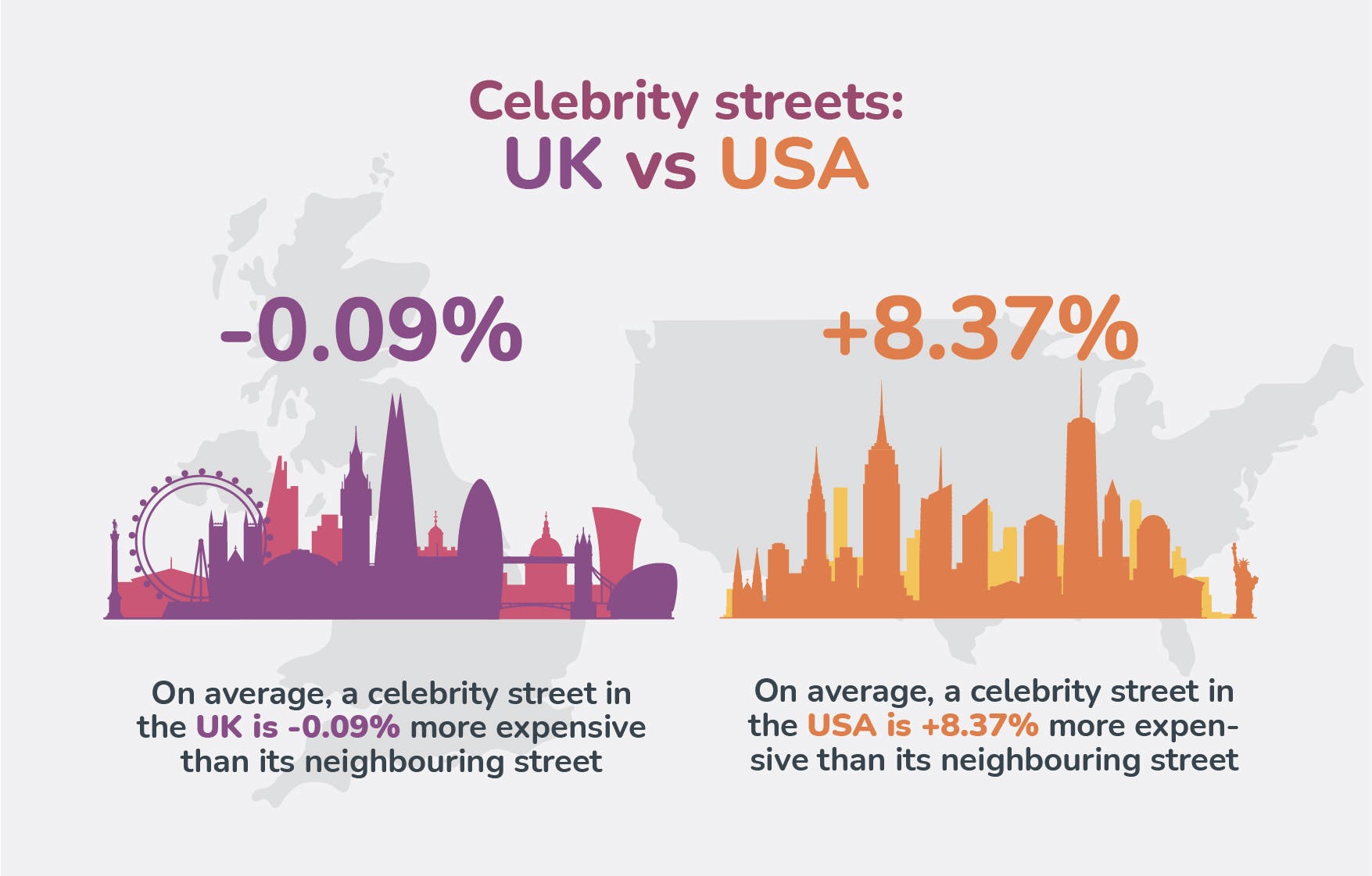 Looking to move to a celebrity street?

So it turns out living on a celebrity street could end up adding thousands of pounds onto your property value, as long as you choose wisely! If you're considering a move, and are now hunting for a more showbiz address, you can use our mortgage guides to get you the best deal.

The names of celebrity streets across the UK and USA were collected along with USA house price data from Zillow. The price of each house on the road was then summed and averaged to get an average price for the street. This was repeated for neighbouring streets and then averaged before calculating a percentage difference between these streets and the celebrity street.

For UK addresses we used Zoopla which provided figures for the average cost of the street as well as the percentage change in price for the last 12 months and 20 years. This process was then repeated for two neighbouring streets to get an average price for other streets. A percentage difference calculation was then used to see how much more/less celebrity streets were compared to regular streets.