As we continue to spend an extensive amount of hours at home, the importance of maintaining a work-life balance has never been more important. With this in mind, the mortgage experts delved through data to uncover where in Britain is the best place to achieve a good work-life balance.
Share this guide

Following a year where we have spent more time at home than ever, the importance of a balanced lifestyle has never been more fundamental. However, remote working has taken a toll on many with recent research revealing that it has led to a heightened level of stress.

As people struggle to get away from their desk, workers are experiencing a blurred line between home and work-life. With this in mind, our mortgage experts have delved into The Office of National Statistics (ONS) data to uncover where you should consider relocating for the best work-life balance.

To develop our Work-Life Balance Index we scored local authorities in England, Scotland and Wales on a number of ranking factors to discover the 20 places to live to achieve a good work-life balance.

Our study also highlights where is the best for various lifestyle factors that work towards this. 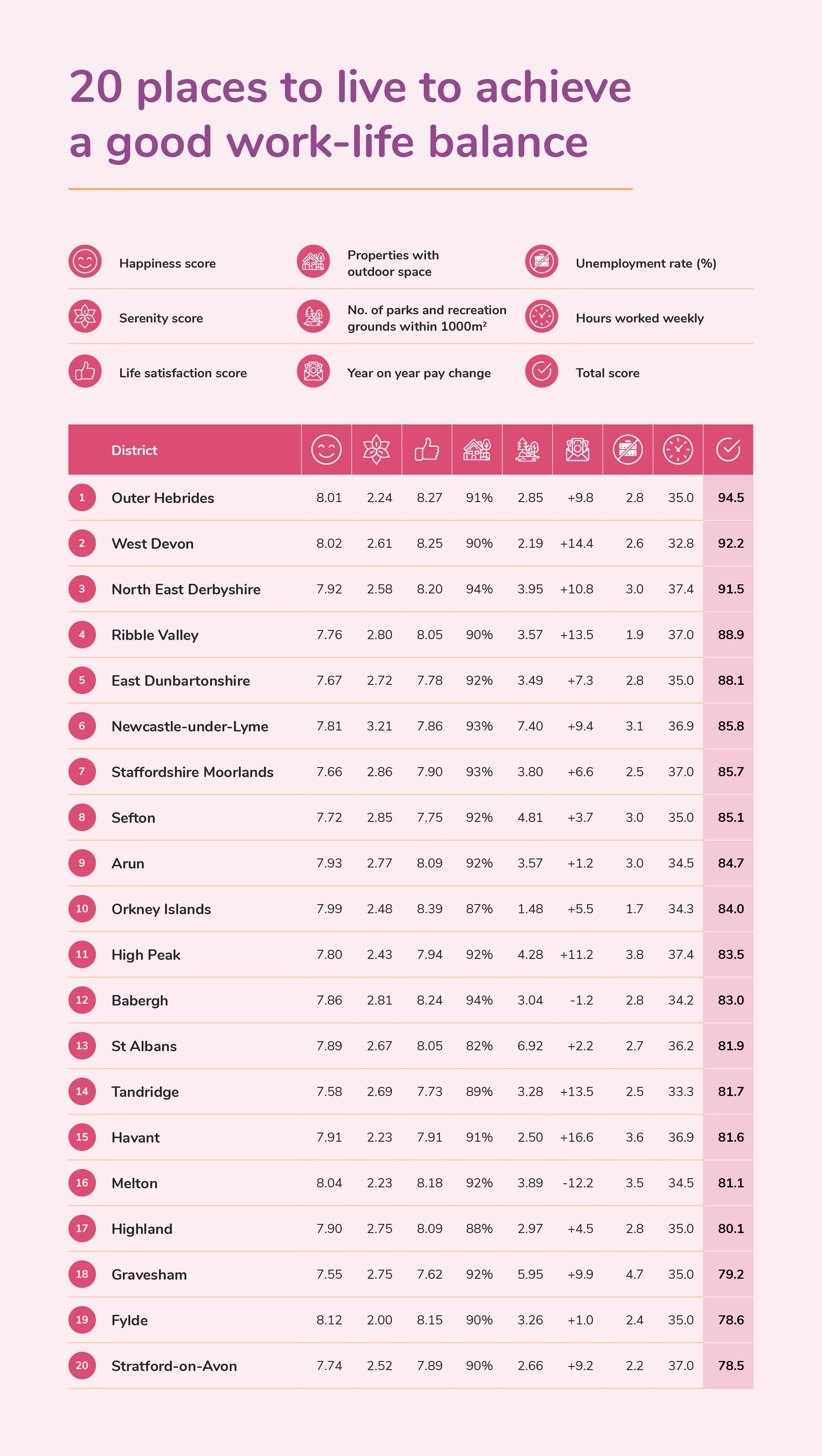 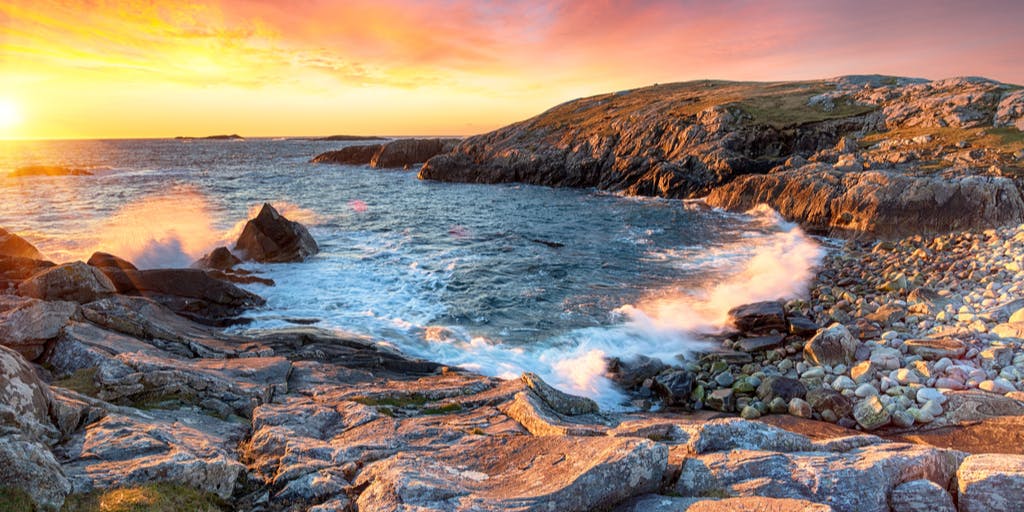 Taking the top spot is Scotland's Outer Hebrides, with an impressive 94.5 out of a possible 100 points on new money.co.uk Work-Life Balance Index.

Famous for its beautiful scenery, incredible wildlife and star-filled skies, the islands are spectacular and now officially the best place to relocate to for a balanced lifestyle.

With an economy known for fishing, weaving and tourism, the islands are rich in unique history and heritage, home to a tight knit community of 26,830, where residents are spread across 15 of 100 islands.

For work, Fibre Optic broadband speeds ensure businesses are able to keep well connected with the rest of the world.

Taking second spot is the coastal district of West Devon. Home to beautiful beaches, rolling countryside and a national park, it is no wonder that it places near the top of our the index.

Not only does West Devon score highly for positive lifestyle factors such as happiness and serenity, but both payment and working hours make for a great work-life balance.

Third for work-life balance is North East Derbyshire. Bordering The Peak District and South Yorkshire, the area is home to pretty villages and stunning stately homes. With easy access to major cities and the Great British countryside, it is no surprise that North East Derbyshire sits high on our list.

Research from the University of Oxford found that happiness leads to a 13% enhancement in productivity. In turn this decreases stress in the work place, making for a good lifestyle balance during both working and non working hours.

In contrast, struggling to find a balance risks damage to our mental wellbeing. Experts have claimed that 51% of work related ill health cases are connected to work place stress, depression or anxiety. Therefore, analysing which areas in Britain people live the most laid back or "serene" lifestyle is important, when determining stability.

Ultimately, working long hours prevents workers from allocating time to enhance both their mental and physical health. This risks life satisfaction levels, as future achievements inside and outside of work are jeopardised. 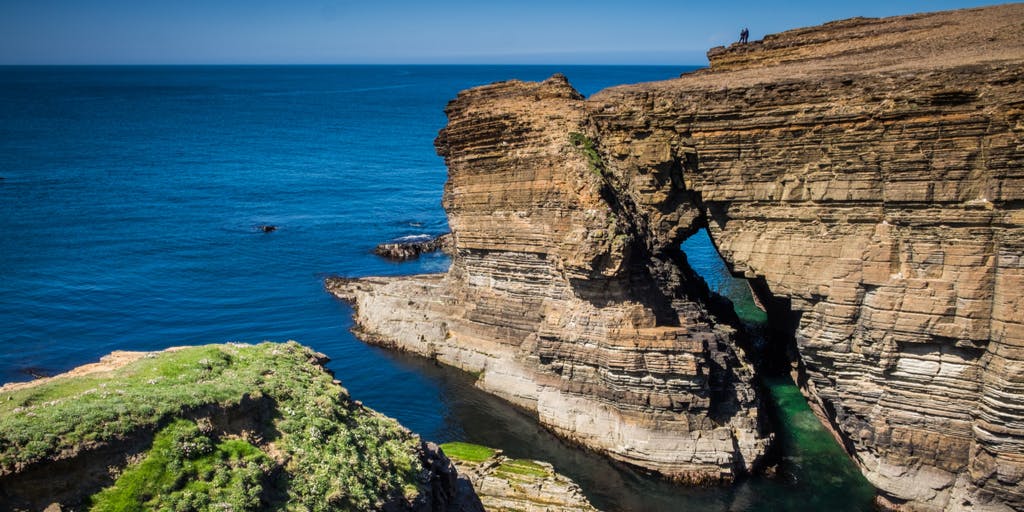 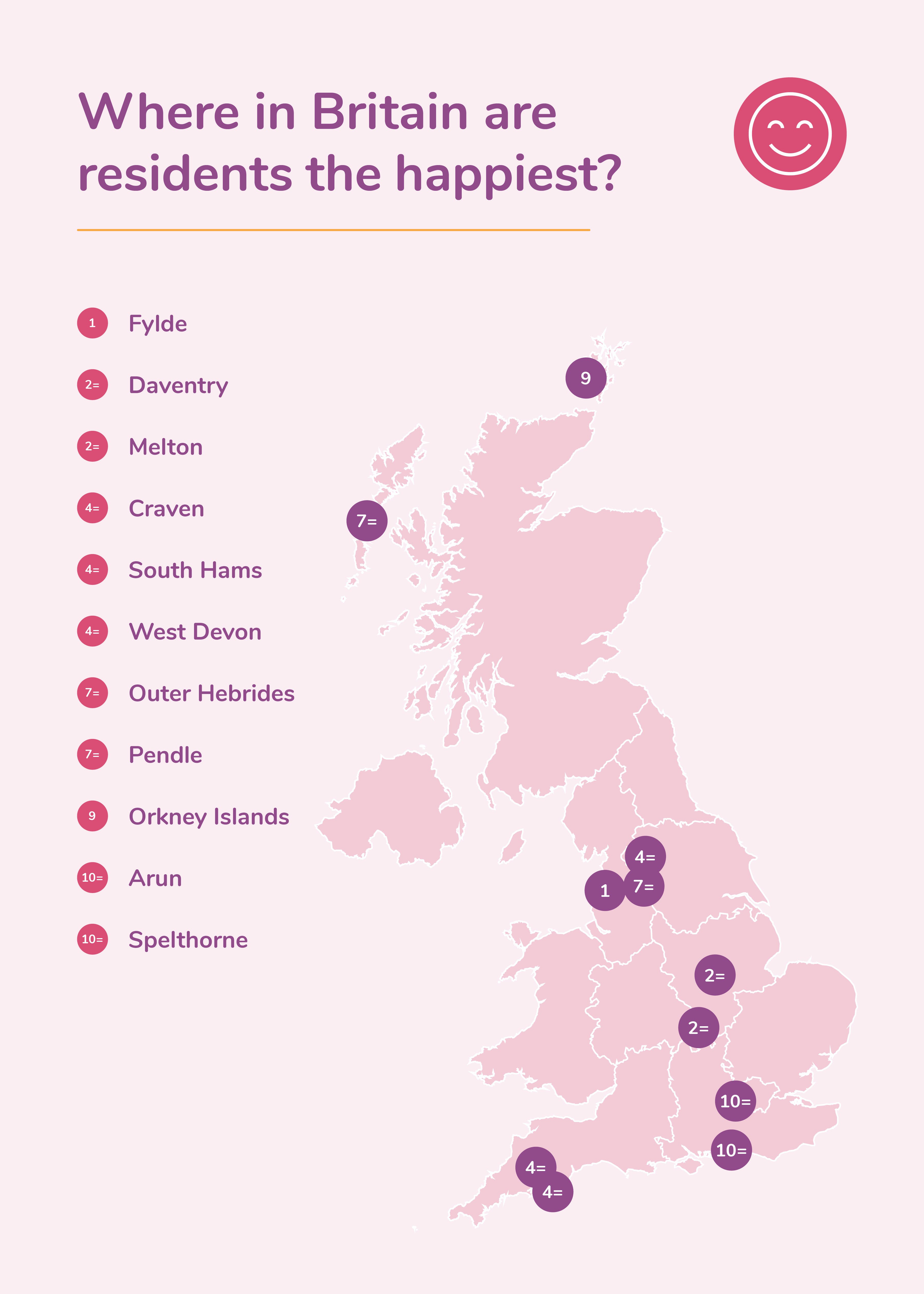 Residents in the coastal region of Fylde are the happiest in Britain. The district neighbours Blackpool and has heaps to offer in the way of entertainment, art and beaches. It also ranks second on our list for serenity and ninth for life satisfaction.

Joint second place on our happiness rankings are the local authorities of Melton and Daventry. Both areas also score high on our life satisfaction list as well, (Melton, 8th and Daventry, 22nd). 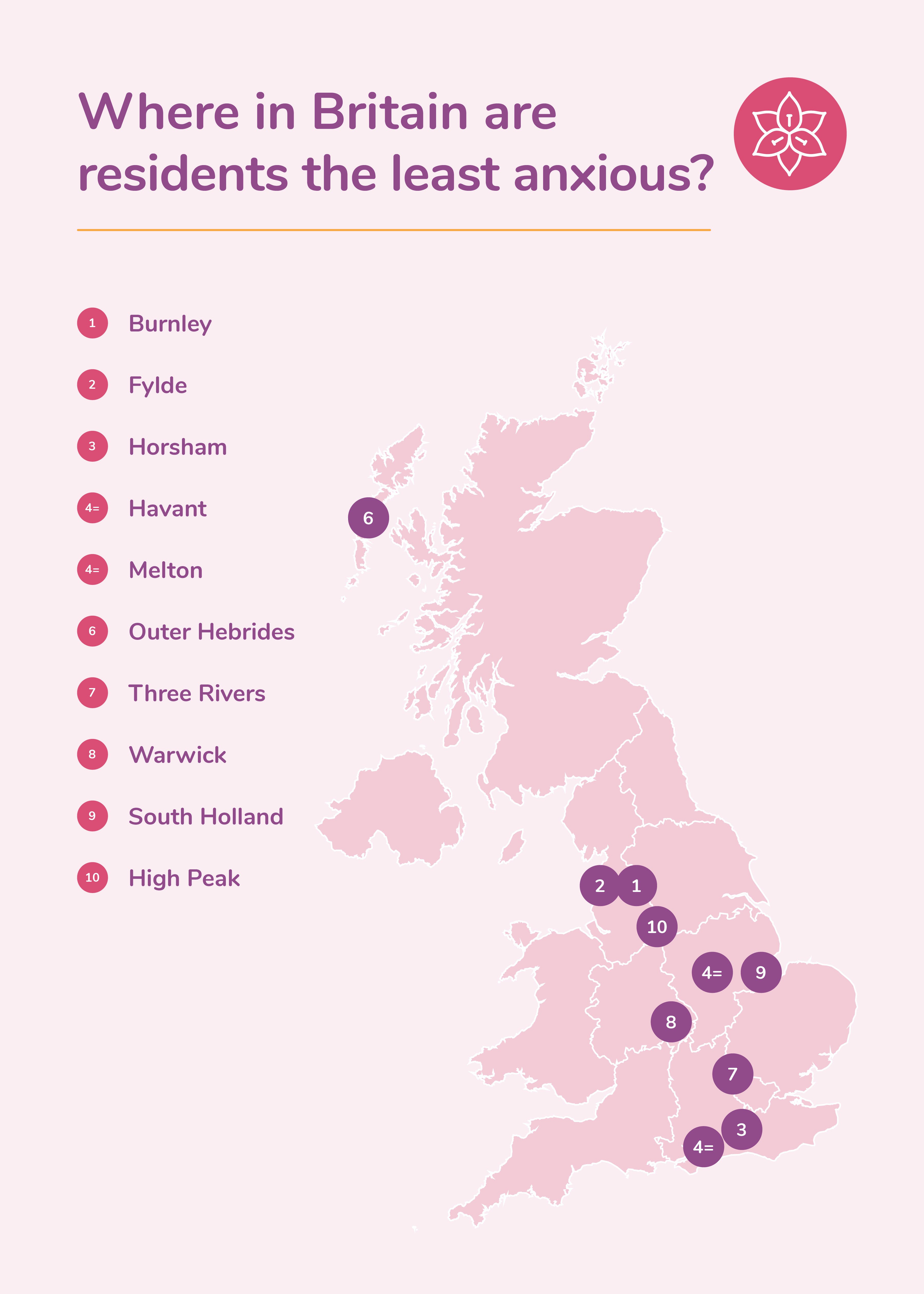 Residents in the Lancashire town of Burnley are apparently the least anxious in Britain, with the former cotton mill town ranking top for serenity. Burnley offers a unique blend of town life with access to the Pennines and surrounding countryside.

Also near the top of our list of serene locations, is the district of Horsham, in third place. The historic West Sussex town is largely pedestrianised and offers much in the way of shops and restaurants. 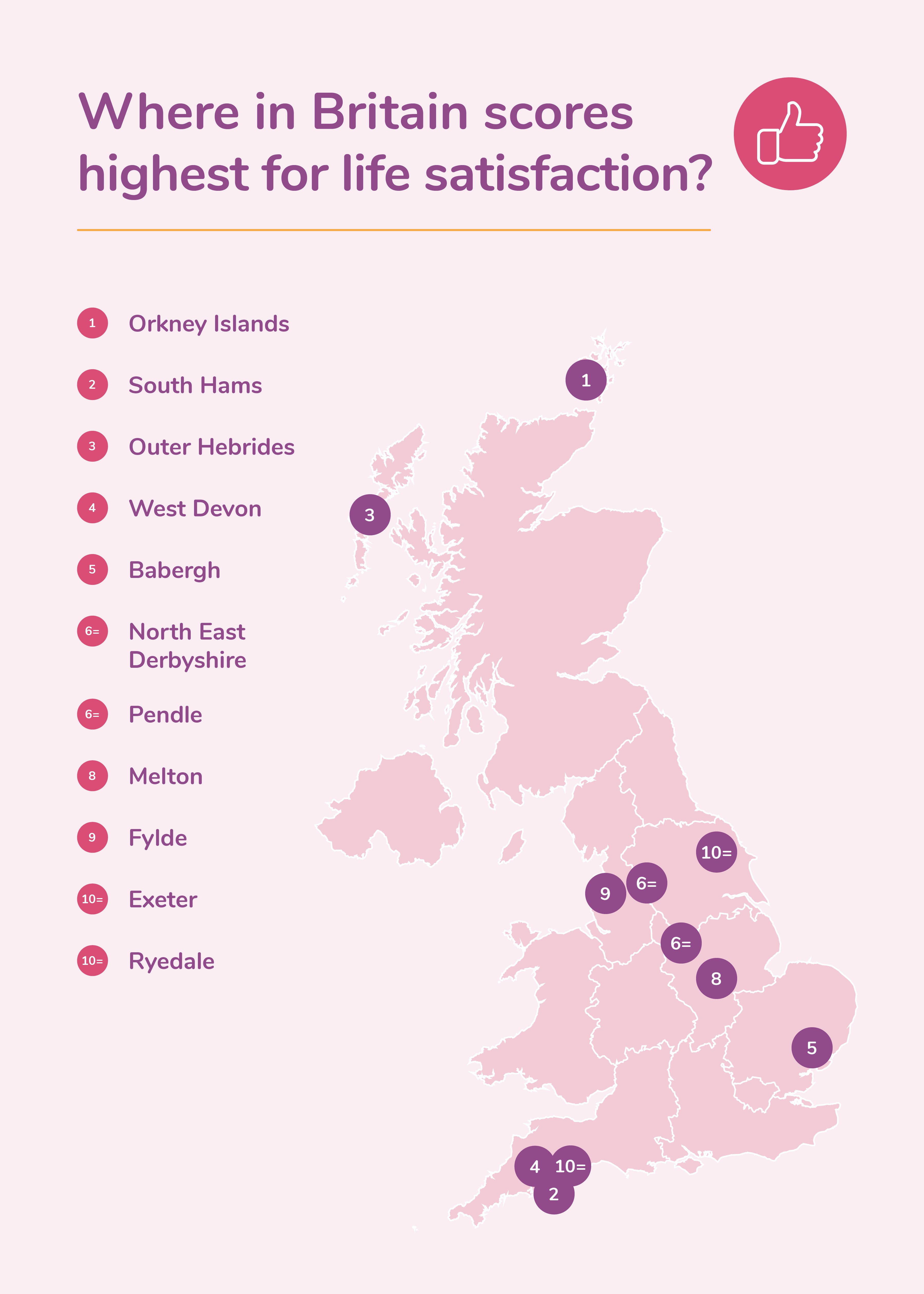 The Orkney Islands has been named the destination where life satisfaction levels are the highest. Located off the coast of Scotland, it is made up of 70 islands, of which 20 are inhabited. With a population of just 20,000, there is a close knit community feel.

Second to the Orkney Islands for life satisfaction is the South West district of South Hams. It is made up of pristine beaches, and the North of the region covers parts of Dartmoor National Park.

Having access to outdoor space has never been more important. It makes way for social distancing and exercising, as so many people are now spending much of their working life at home. In fact, it has become so important over the last year, that research suggests that properties possessing garden’s have increased in value by 20%. 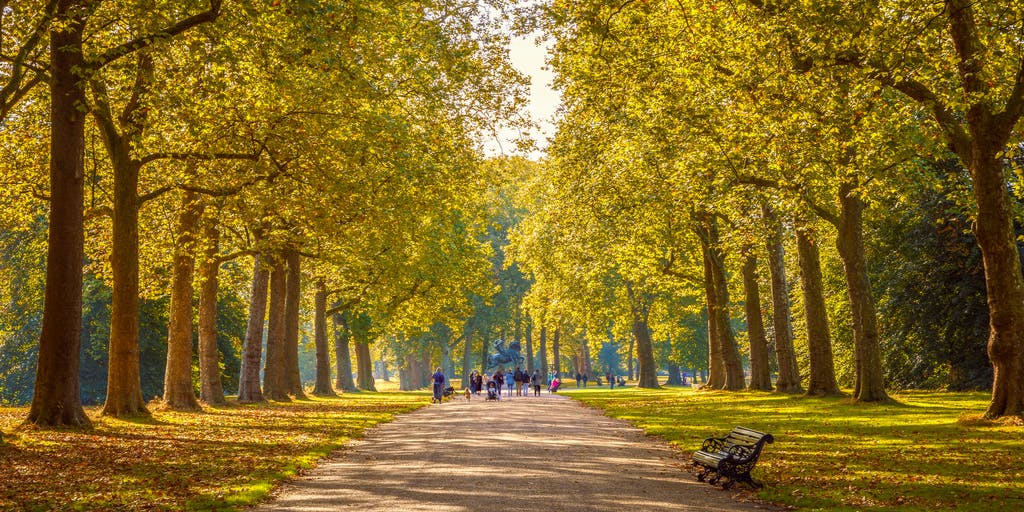 Although residents in London are the least fortunate when it comes to owning private outdoor space, a number of boroughs in the capital top the list for access to parks and playing fields. In fact, eight out of the top 10 locations in the category are London boroughs.

The vast selection of parks that Londoners have at their doorstop, allows for tranquillity in the middle of a bustling city; from the royal grounds of Hyde Parks, to the beauty of spots such as Hampstead Heath.

Topping the list for park and recreation access is the borough of Tower Hamlets, which has almost 13 parks and playing fields per 1000 m2. This is followed closely behind by Southwark (12.01 per m2) and Islington (11.79 per m2). It is thanks to such spaces that Londoners can relax, exercise and socialise outside of working life.

South Tyneside top’s the areas of Britain, where most residents have access to private outdoor space. The district is made up of multiple towns including across South Shields, Hebburn and Jarrow, as well as the villages of Boldon, Cleadon and Whitburn.

A study by the mobile experts at money.co.uk, reveals that over one quarter (27%) of people are spending more than six hours a day on their phones. What's more a third of this time is taken up by work related activities.

Ultimately, having access to outdoor space is a hugely important factory in encouraging employees to have time away from their screen and lead a balanced lifestyle. However, it is vital that during leisurely activities outdoors, people take time away from their technology devices to limit an "always on" working culture.

Unemployment plays a large part in work-life balance, as high levels of risk create an unstable working environment. Those living in areas where unemployment is heightened are in danger of an enormous amount of pressure, which could lead to stress and an unbalanced lifestyle.

Working long hours often decreases efficiency and productivity, and ultimately leaves less time to lead a balanced lifestyle. Working long hours can lead to employees neglecting both their physical and mental health, which could result in health problems down the line.

A recent survey revealed that money and work are the biggest factors contributing to stress for millennials’, therefore we deemed it important to consider pay on our work-life balance scale. 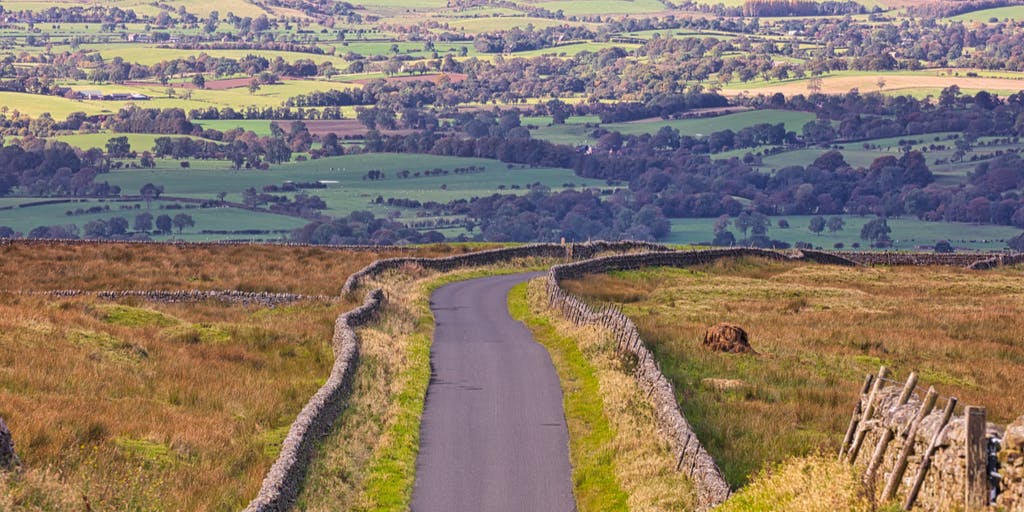 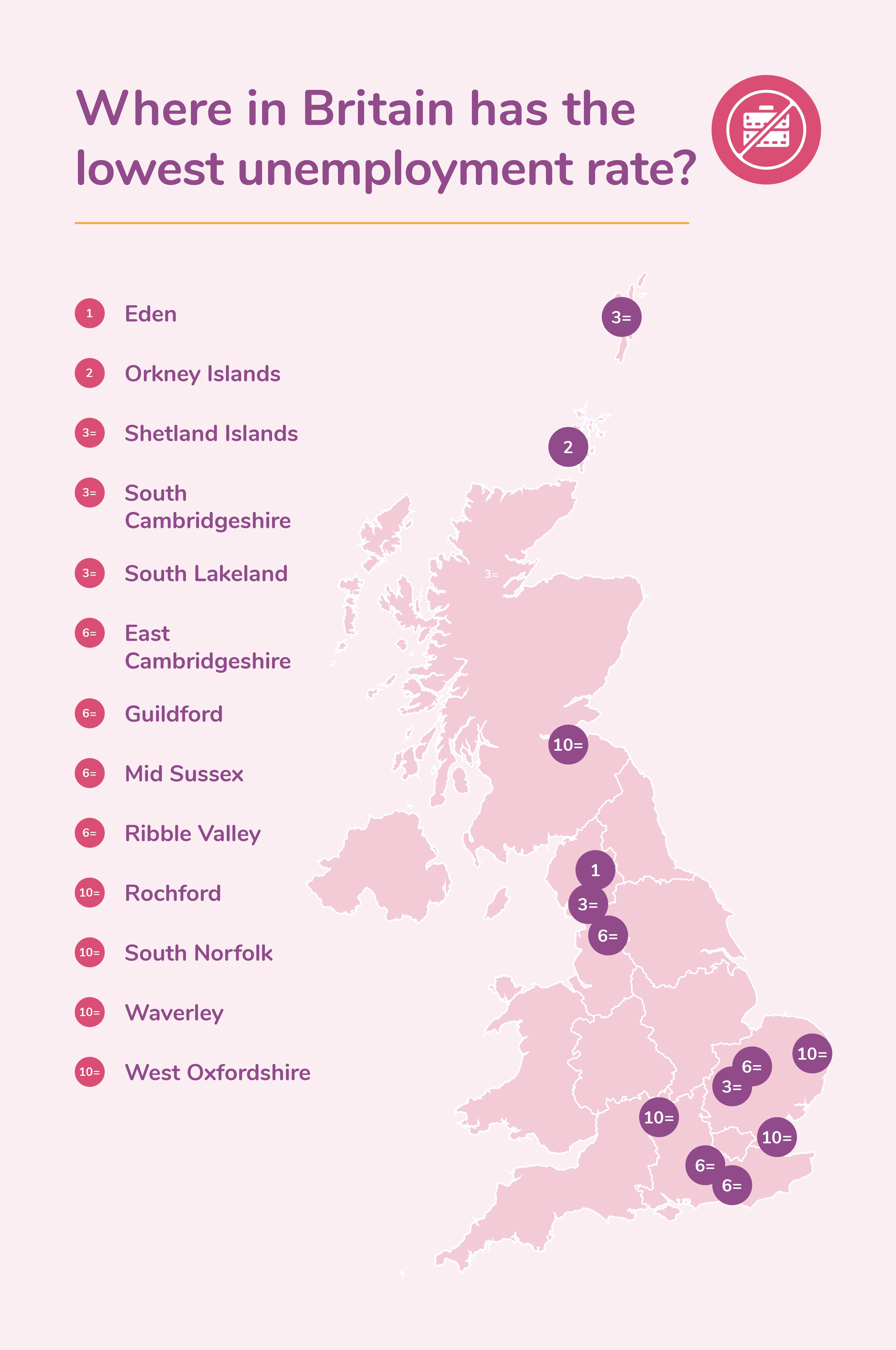 The Cumbrian district of Eden has the lowest level of unemployment in Britain (1.5%). The location has been praised for its beautiful green surroundings, making up the North Eastern area of the Lake District. Eden has a large farming industry, from dairy and beef to oats. While it is the eighth largest district in England, it has the lowest population density across both England and Wales.

Research into small towns and communities, concludes that such setups achieve strong economic growth and entrepreneurship.

The Orkney Islands has the second highest proportion of their adult population in work. The tight-knit community makes for a strong sense of culture, being one of the only places to have preserved Scots language. Thanks to this, the unemployment rate is just 1.7% - almost a third of the UK average.

The districts of South Cambridge, South Lakeland and The Shetland Islands has the third lowest level of unemployment in Britain (1.8%). 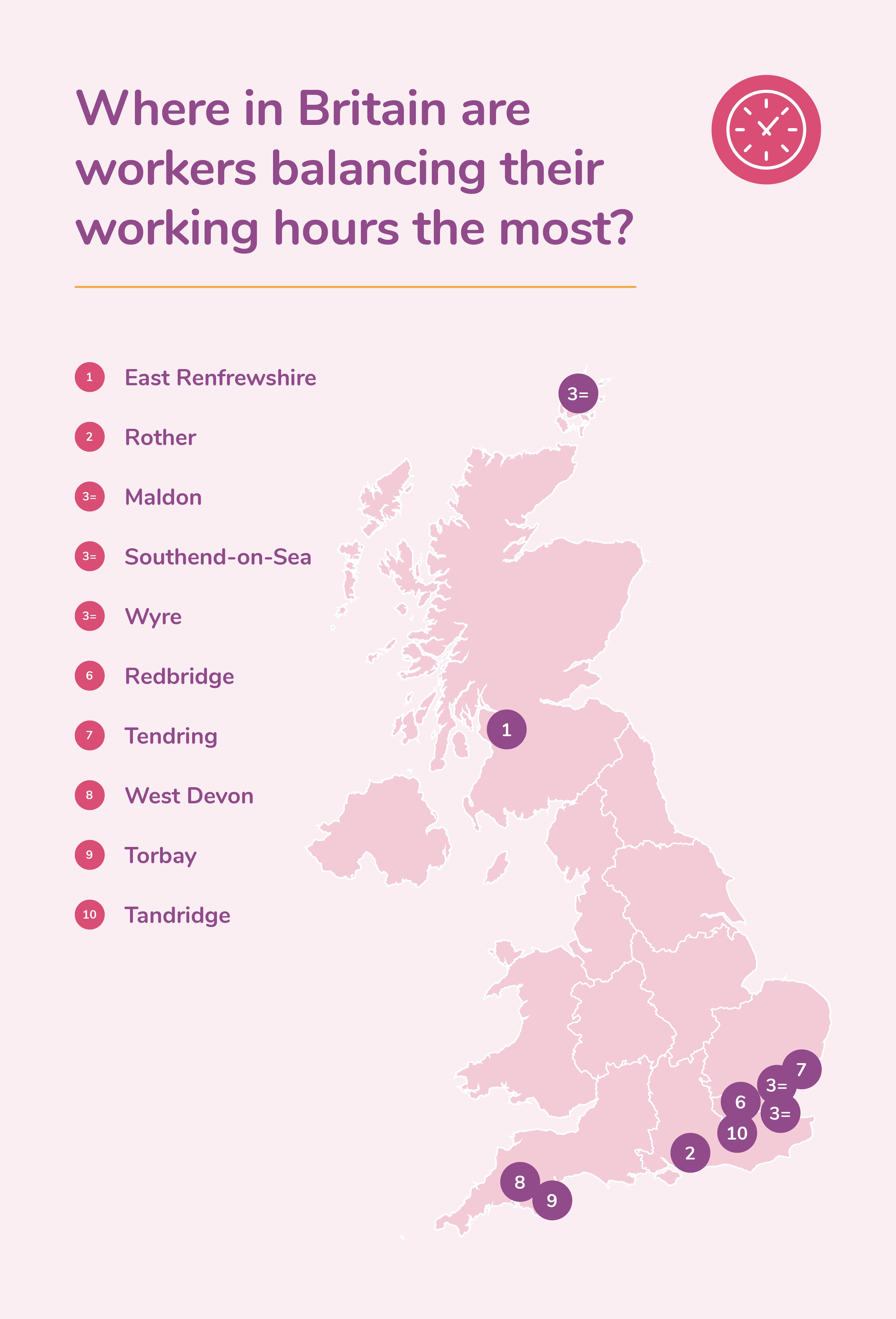 Those fortunate enough to work in East Renfrewshire are blessed with the most stable lifestyle when it comes to hours worked (29.6 hours weekly)*. Sitting just South of Glasgow, it also holds low levels of unemployment (2.6%) compared to the rest of the country.

After East Renfrewshire, the East Sussex district of Rother is the next best place in terms of a balance between working hours and everyday life (31.9 hours weekly).

Three local authorities are listed joint third for hours spent working weekly. These include the English district’s of Maldon, Southend-on-Sea and Wyre. Residents working on these areas, work on average 32.4 hours per week. 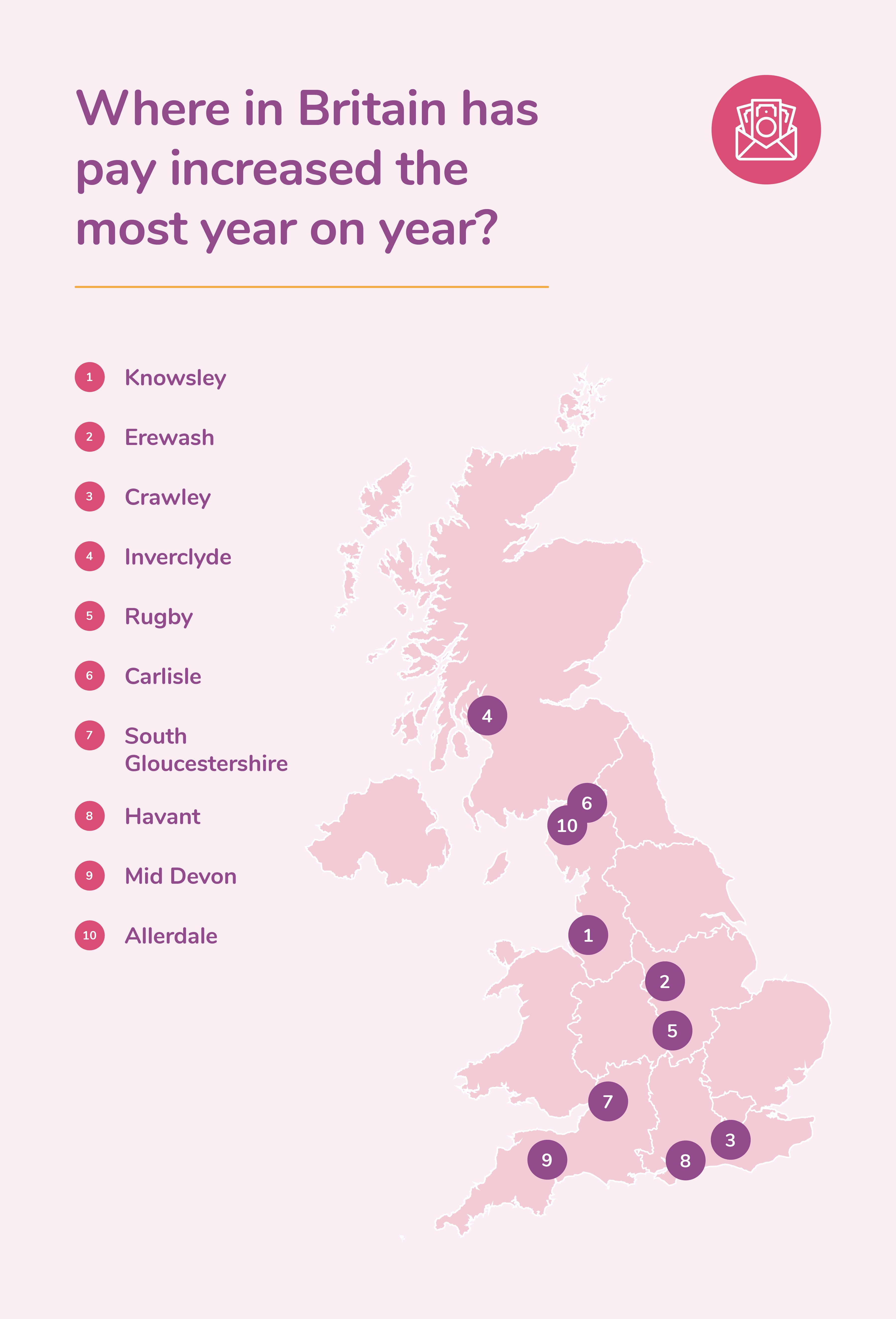 Findings reveal that the area with the biggest pay change YoY was Knowsley, located in Liverpool City**. Average pay within the borough increased 28.3% YoY figures released in 2019 and 2020.

Following Knowsley is The Borough of Erewash, sat between Derby and Nottinghamshire. It is made up of urban towns such as Ilkeston and Long Eaton. The latest figures show that pay increased on average 26.9% YoY in the district. Crawley takes the third spot on our index for YoY pay increase (21%).

Our “Work-Life Balance” index is based on an analysis of ONS data. Eight different factors were considered in our rankings, and scored equally between the various categories.

*Annual estimates related to working hours and pay are provided to the tax year that ended April 5th 2020. Due to the CJS commencing 2 weeks before, the majority of findings related to hours of pay were not impacted by the scheme. Therefore, we conclude it to be a realistic measure of work-life balance.

**Employees on adult rates whose pay for the survey pay-period was not affected by absence. Estimates for 2020 include employees who have been furloughed under the Coronavirus Job Retention Scheme (CJRS).