Which major events cause Airbnb prices to rise the most? With the events industry opening up again, the mortgage experts at money.co.uk reveal the 2021 events that have made an impact on Airbnb pricing the most.
Share this guide

The major events that cause Airbnb prices to rise the most

As COVID-19 restrictions start to ease, we can finally begin to think about getting back to enjoying all those things we’ve missed over the last 18 months or so, whether it’s live music and festivals, or heading back through the turnstiles to see your favourite team.

One of the benefits of securing a mortgage in locations that play host to large events is that it can open up the possibility for homeowners to earn some extra cash.

Looking to move? Compare mortgages to find the right deal for you.

With thousands of people looking for somewhere to stay for a night or two, marketplaces such as Airbnb, can be lucrative in these areas.

But how much does a sporting or entertainment event affect the price of Airbnbs in the local area?

The mortgage experts at money.co.uk looked at some of the biggest events of 2021 to see how the average Airbnb nightly rate compares during the time the event takes place, and the week immediately before them.

The 2021 events that impacted Airbnb prices the most 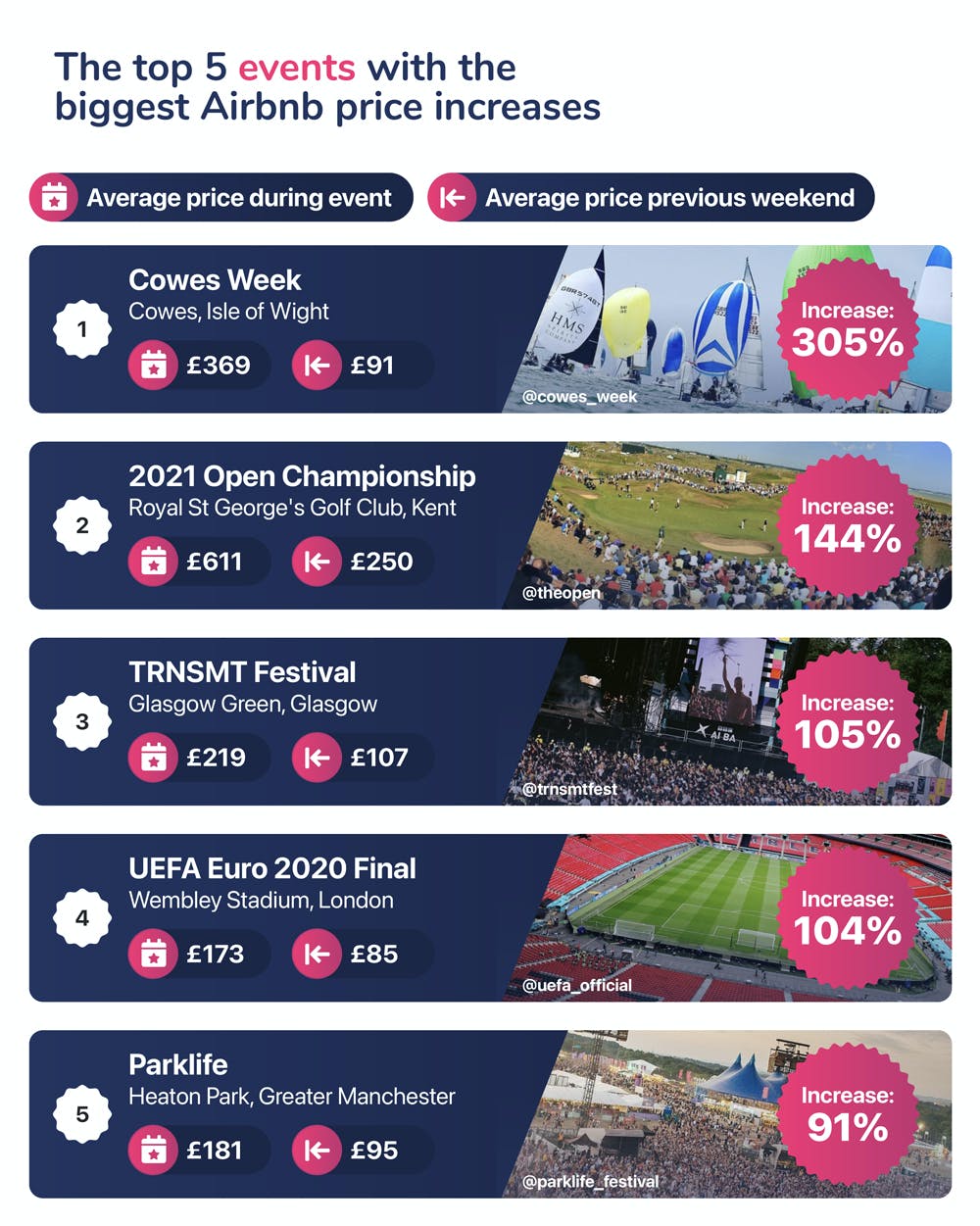 The event which had the biggest increase in rental prices was perhaps a lesser-known one, Cowes Week, one of the oldest and most respected sailing regattas in the world, which takes place on the Isle of Wight.

And it’s the fact that the event takes place here that likely contributes to the reason that prices soar so much around the time of the event.

Other accommodation options are much more limited on the island than they would be in a major city, for example, meaning hosts can afford to charge much more during the week of the event.

In second was the Open Championship golf tournament which this year takes place in Sandwich, Kent.

Here the average Airbnb is still quite pricey in the week before the tournament, at a cost of £250 per night on average, but that jumps by more than double to £611 during the event.

The fact that this event takes place in a small town with fewer accommodation options is likely the main reason why demand is so high and thus prices see such a steep increase.

TRNSMT Festival is a fairly new arrival on the UK’s festival scene but it is already one of the most popular in the country, with Airbnbs in Glasgow costing twice as much on average during the festival as they do the week before.

As TRNSMT takes place in Glasgow city centre, there are no camping facilities for people attending, meaning alternative accommodation has to be found, which is presumably why there is such a high demand for Airbnbs during this particular weekend!

The “new” Wembley Stadium has hosted some huge events since finally opening its turnstiles in 2007, but arguably none as big as the final of Euro 2020 which took place this summer.

It wasn’t just the result which left fans feeling down, as those who travelled to Wembley and rented an Airbnb for the big final will have seen a price increase of 104% on average.

Like TRNSMT, Parklife is a festival taking place in a city-centre location with no camping available, so it stands to reason that Airbnbs will get booked up pretty quickly in Manchester on this weekend, especially as Parklife has seen its popularity grow and grow in recent years (along with its capacity).

An Airbnb around Manchester’s Heaton Park will cost £95 per night the week before the festival, but this rises to £181 on average the following weekend!

The holidays with the biggest Airbnb price increase

The research also looked at a number of the biggest nationwide holidays yet to take place this year, to see how the price of accommodation increases as people flock for city breaks. 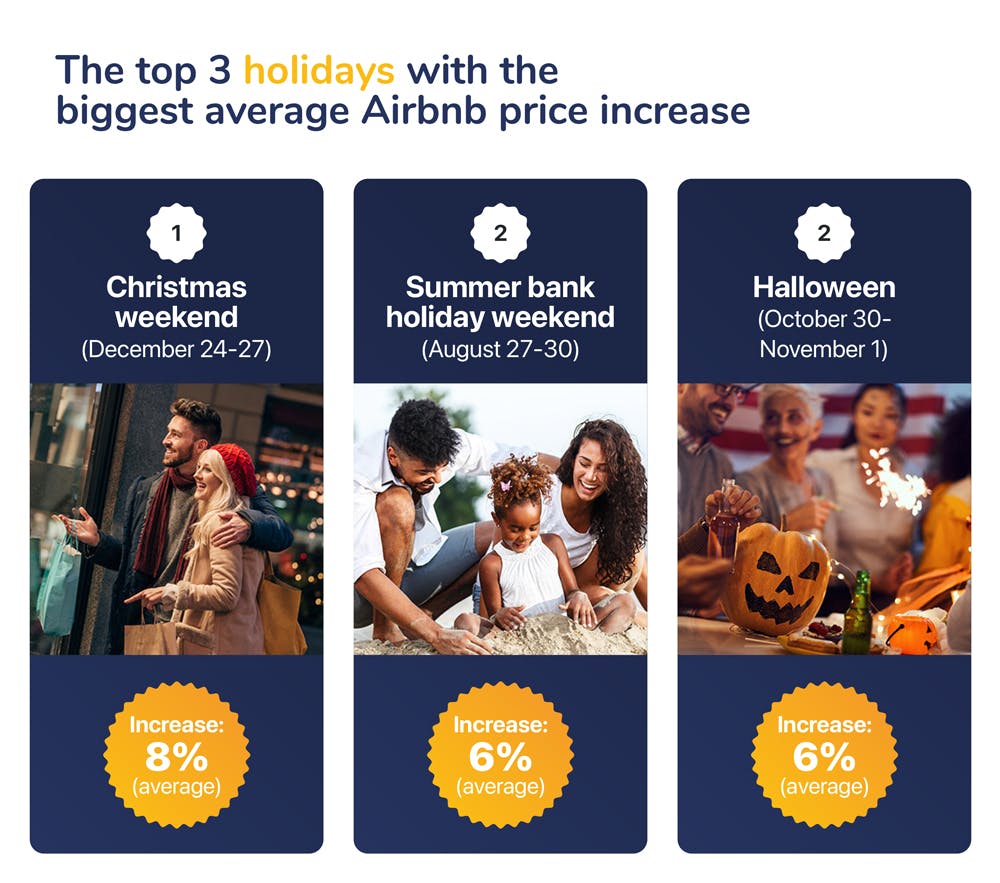 The analysis looked at three weekends during the year, when people commonly look to get away: the summer bank holiday, Halloween, and Christmas, looking at the prices in the UK’s ten biggest cities.

While not a public holiday, Halloween is a big event here in the UK, with many heading to parties and events up and down the country on this weekend.

In the country’s ten biggest cities, prices rose by 6% on average over Halloween, but the city which saw the biggest price increase by far was Glasgow, with the average price going up by 58%!

However, this demand for Halloween accommodation seemingly doesn’t stretch to other cities, with the places with the next highest increases being Bristol (4%), Leeds and Manchester (both 2%).

The summer bank holiday weekend is the last chance to enjoy the summer sun, with lots of events and festivals usually taking place on this weekend too.

The extra Monday off work means that many choose to embark on a city break, with Airbnb prices in the UK’s biggest cities increasing by 6% on average this weekend.

But it was Liverpool that saw prices increase the most, with the nightly fee jumping by 22% compared to the previous weekend, followed by Bristol and Manchester (both 11%).

While most people choose to stay at home and spend time with their family for the festive period, many choose to get away and treat themselves to a break and check out the various Christmas markets in the country’s major cities.

Average rental prices in these cities go up by an average of 8% for the weekend between Christmas Eve and December 27th, most notably in Edinburgh, increasing by 18% on the previous weekend, followed by Sheffield (14%) and Liverpool (9%).

Below are the twenty weekends in these cities that saw the biggest increases in average rental prices.

For each event, money.co.uk looked at the average nightly price (correct as of June 30th 2020) according to Airbnb on the dates that the event is due to take place.

In each instance money.co.uk looked at all the listings that were returned when searching for the location or venue of the event (so for example, Wembley Stadium rather than just London for the Euro 2020 final), taking the average price for all these properties as shown on Airbnb’s “Price” filter.

Money.co.uk also looked at prices on the corresponding dates of the previous week, so for example if the event took place between Friday and Sunday, money.co.uk looked at the Friday to Sunday of the following week.

Note that the events listed above are the 20 events that saw the biggest average price increases, some other big events saw little or no change in prices (primarily those in big cities such as London).