Our mortgage experts trawled through streaming data to discover out how many streams some of the world's most famous musicians and singers need of their songs to be able to afford their fabulous property portfolios.

With music turning to digital, people are able to stream their favourite songs and albums for weeks at a time before moving onto the next new hit. However, have you ever stopped to think about how your streaming habits translate into income for some of these artists?

We’ve calculated how many Spotify streams some of the world’s top artists need to be able to afford their lavish million pound pads. Some songs were such a hit that one song alone could outright pay for an artist's whole house, whilst others needed an entire album or two to be able to pay off the mortgages on their portfolios. In fact,  if you’re looking to buy a house soon (and you’re not a platinum selling musician), you should compare mortgages to find your best deal.

Take a look at which songs racked up the highest number of streams, and see which artists would be able to afford their elaborate houses through Spotify streaming alone...

As Billie Eilish takes the music industry by storm, it might surprise you to know that despite her new found fame, the 19 year-old has kept to her modest roots. She resides with her parents at her family home in Los Angeles, in a property costing £559,011 ($763,400).

In 2019, Eilish released her biggest hit to date , ‘Bad Guy’, raking in over 1.6 billion streams on Spotify and earning her a healthy sum of £5.2 million ($7.1 million) from just one song. Bearing in mind this artist still lives in her family home, Billie has more than enough money to buy a property or two when she’s ready to venture into the market.

Drake lives one the most lavish lifestyles out of all of the artists in our list, residing in a £81 million ($109 million) home in Toronto, known as “The Embassy”.  This luxurious 50,000 square foot home not only includes an indoor swimming pool, but also a recording studio, basketball court and a two-floor tall wardrobe!

More surprisingly, despite Drake’s biggest hit, God's Plan, accumulating 1.67 billion Spotify streams, he only earned £5.35 million ($7.3 million), a fraction of the cost of his lavish Canadian home. In fact, all of Drake's music combined on Spotify still would not generate enough money for him to collectively afford his grand property portfolio. On average, Drake would have to produce 308 top hits, replicating Gods Plan’s success, to be able to pay for his elaborate house through Spotify streaming. However, luckily for him, he has many other sources of revenue through his own record and clothing label called OVO - October’s Very Own.

Last year, Ariana Grande purchased her new pad, costing £10 million ($13.7 million) for an ultra-contemporary home based in one of LA’s most star studded neighbourhoods - Bird Street.

As well as having Leonardo DiCaprio as your neighbour, this house also includes a home gym, cinema room, sauna, bar and wine closet!

Grande’s biggest hit to date, Thank U, Next, has been streamed over 1.34 billion times on Spotify, earning her £4.3million ($5.4million). Arianas combined Spotify income from her five hits, Thank U, Next, Positions, Break Up With Your Girlfriend and 7 Rings have generated £11.4 millions ($15.6million) - enough to buy her gorgeous new Hollywood Hills home in full.

What more would you expect from the queen of glamour themselves, than a £10million ($13.7 million) neoclassical chateau in the middle of Beverly Hills, with a two-story chandelier-topped foyer? RuPaul’s stunning property spans an impressive half an acre and includes a swimming pool and spa, all whilst surrounded by exquisite landscaping.

RuPauls most iconic hit, Sissy That Walk, has been streamed over 65.3 million times on Spotify, bringing in £209,477 ($285,471) in Spotify revenue alone. However, even 14 of RuPauls biggest hits would only generate £619,231 ($845,627), way off of the price of this lavish mansion. In fact, RuPaul would have to produce 48 bangers, replicating Sissy That Walk’s success, to be able to pay for the Beverly Hills house outright. Luckily, the Drag Race franchise is so successful that this queen has no problems when it comes to affording their pricey palace.

It is evident from our study that those artists, who we dare say, live in more modest houses for their celebrity status, are able to live within their means through Spotify revenue alone.

Most houses under £4million ($5.4million) are able to be supported by an artist producing four hit songs or less. However, artists such as Drake and Kanye West, who have invested mass amounts of money into their property portfolios, aren’t able to afford them through Spotify streaming alone. Instead, these artists are having to invest their time into other means of income to uphold their mortgages, through touring, brand partnerships, owning their own fashion brands and successful businesses alongside their streaming revenue. 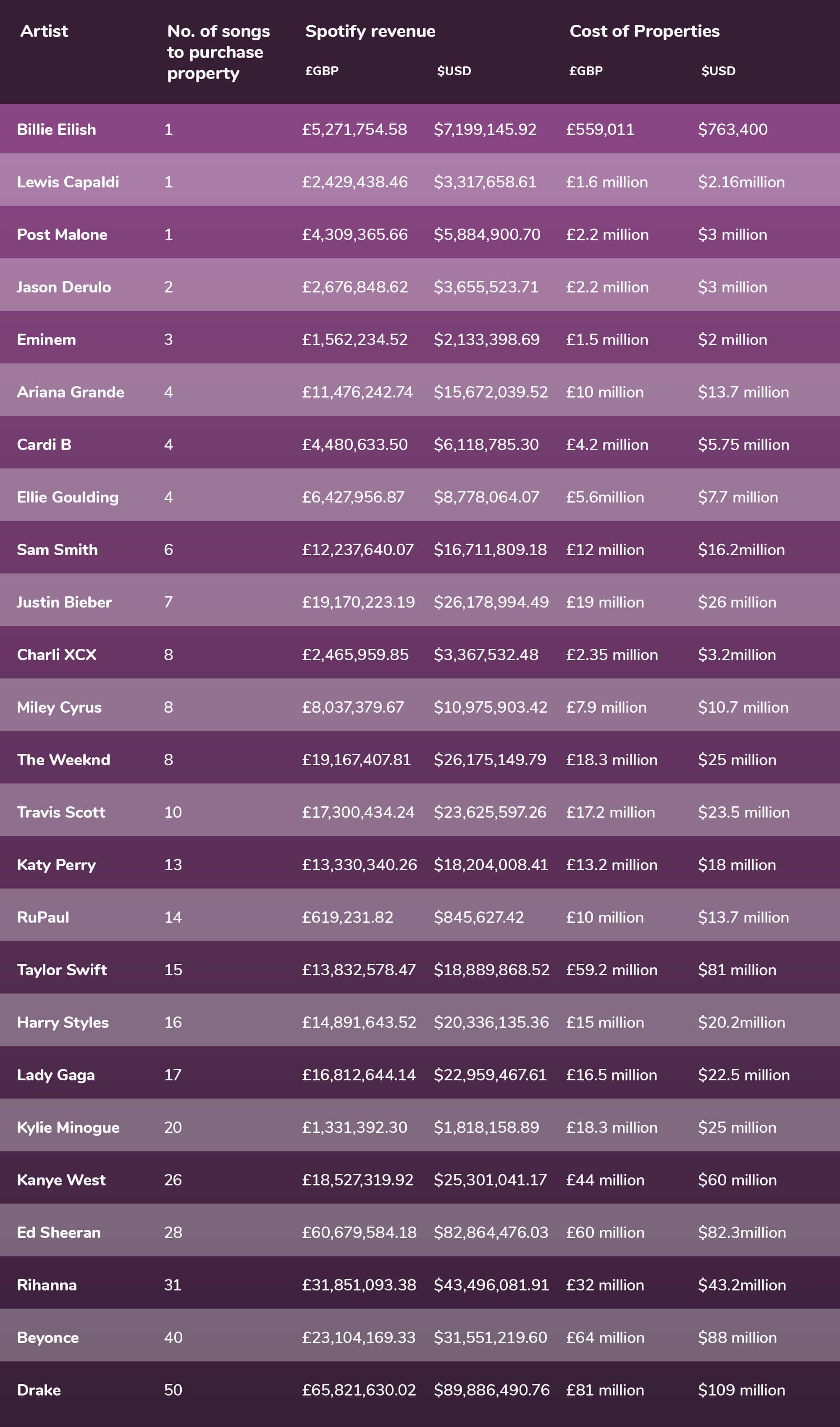 Lewis Capaldi buys house with the Spotify revenue of ONE hit song!

This Scottish singer finally stepped onto the property ladder in 2020, buying his first 5 bedroom mansion for £1.6 million ($2.16 million), just 30 miles from his parents’ house in Bathgate, Scotland where he resided throughout his rise to stardom. Capaldi's new home is the perfect space for entertaining with a built-in wine fridge, jacuzzi and mass amounts of garden space to occupy many a party in the summers.

In 2019, Lewis Capaldi released one of his biggest hits to date, Before You Go, streaming over 759 million times on Spotify and providing Capaldi with a healthy revenue of £2.4million ($3.3 million). The number of Spotify streams from this song alone earned Lewis enough money to purchase his new Scottish mansion outright and even left him with a spare £800K ($1.14million) to spend elsewhere.

Is Harry Styles investing in multiple properties to create one mass estate?

There has been much speculation surrounding Harry’s recent property purchases after he brought his third house neighbouring his first and second property. Rumours have sparked that Harry may follow in fellow artist Ed Sheeran's footsteps and buy multiple nearby properties to create one mass estate!

Harry's latest summer hit, Watermelon Sugar, reached over 993 million Spotify streams and brought in £3.1 million ($4.3 million) in Spotify revenue. This smash hit was just short of buying his new £4million ($5.4million) Hampstead house out right. In fact, this super star would have to use revenue from 16 of his chart topping hits to be able to afford his £15 million ($20.2 million) property portfolio through Spotify revenue alone. Perhaps Harry will have to write a few more smash hits from before his Hampstead estate can become a reality.

Ed Sheeran, is somewhat an anomaly among the index. Despite owning the third most expensive portfolio in the index, costing £60million ($82.3million), Ed is able to afford his millionaire estate through the Spotify revenue of 28 of his songs. Being one of the world's best singer-songwriters has its perks - 12 of his singles have hit number one across his 10 year career, allowing him to cash in the big bucks.

His Suffolk estate includes a pub, tree house, recording studio and even a wildlife pond to enjoy when he’s not busy writing some more chart topping hits.

If you want to see the full insight into Ed Sheeran's Suffolk estate, check out our recent study exploring his house renovations and whether they added value to his property.

Likewise, if you’re thinking about moving to a new property or want to explore your own mortgage options, check out our mortgage comparison guide to help start your own property journey.

Looking to buy your own mansion?

Are you an aspiring singer looking to invest in a mansion? Or just looking to settle down somewhere slightly more quaint? Our mortgage comparison tool will allow you to compare mortgages, to find the one find one that suits your needs.

Using Spotify’s data, we were able to collect the number of streams each song had by a particular artist and work out the revenue that artist would receive through calculating streaming prices and percentages found on The Trichordist. We then found the property price of these artists' current homes and property portfolios and calculated how many streams and songs they each needed to be able to afford their houses through Spotify revenue alone.

Property prices are taken from the celebrities property portfolio, if multiple properties were owned the prices were combined to create a portfolio figure.