Life in the city can be hectic at the best of times, with seemingly endless traffic, construction, and people going about their business, all generating a fair amount of noise. But which of Europe’s major cities are the loudest?
Share this guide

The hustle and bustle is all part of the draw of moving to a big city, but it goes without saying that cities can be loud and chaotic places to live.

From the noise generated by gridlocked traffic and low flying aircraft to crowds of fans descending on sporting and music venues, or even just the sheer number of people, it can get loud at times.

If you’re thinking of making the move to a city then you can compare mortgages ahead of time to find the best deal for you.

So, where are the loudest and most chaotic places to live in Europe? To find out, our experts have compared 23 major cities around Europe on factors such as the density of people, the levels of road and air traffic, and the number of entertainment venues. 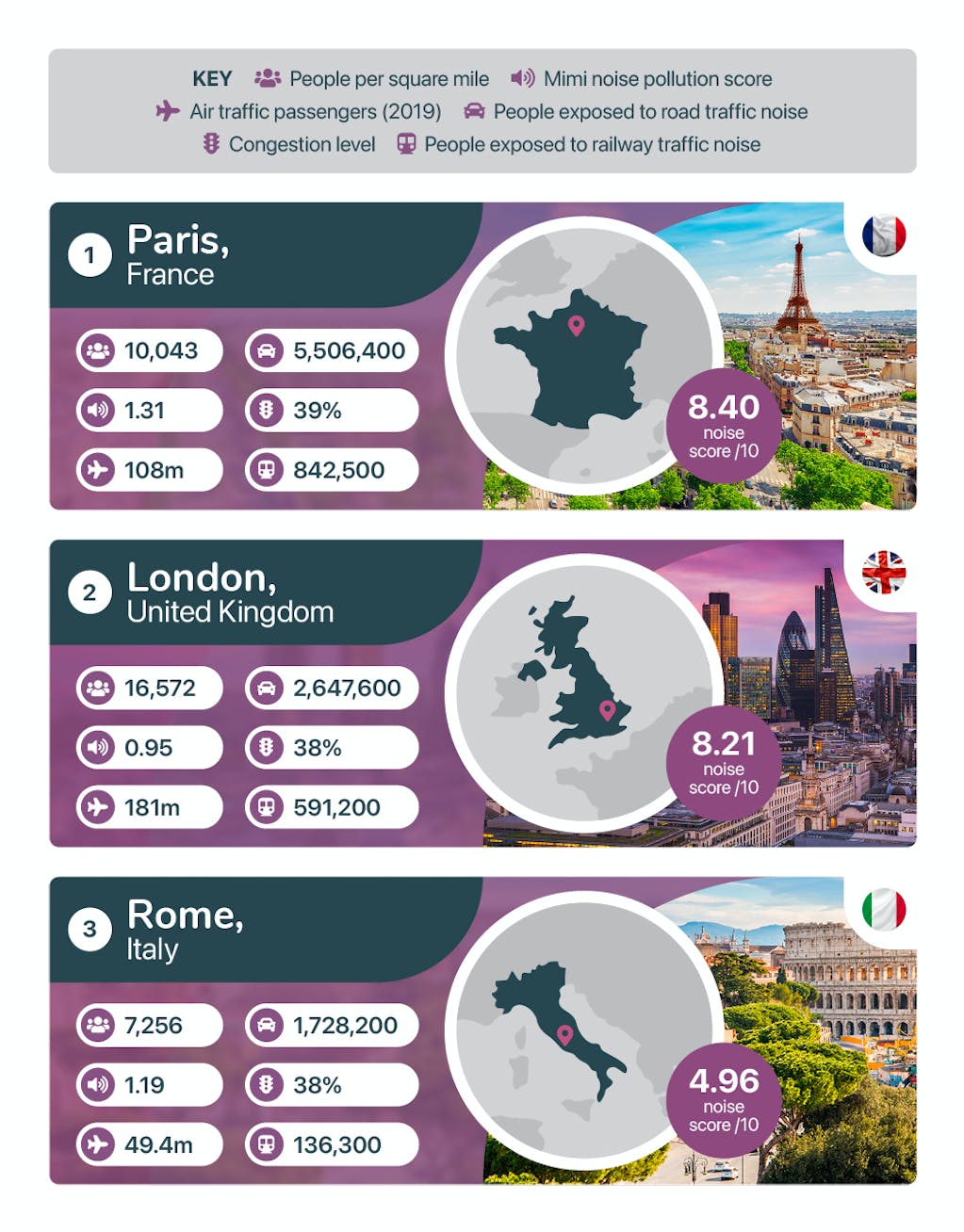 Taking first place is France’s capital, Paris. The City of Light was the worst for the numbers of people exposed to road traffic and railway noise and also had the highest levels of congestion too. Paris is of course a major global city, home to millions of people, with common sounds including the ringing bells of cyclists on the roads and crowds packing into bars and terraces.

London is the UK’s capital and home to around 9 million people, so it’s bound to get noisy at times. The vibrant buzz of London is a big part of why it attracts so many people from around the world, but the various noises of the city may get too much for some at times. London was the city which had by far the greatest air traffic of the cities on our list (181 million passengers in 2019), and also had more than half a million people exposed to high levels of noise from railways too.

Italy’s capital, Rome, is another bustling European city and takes third place in the rankings. Rome had one of the highest noise pollution scores (at 1.19) and also had a high congestion level of 38% (meaning that rush hour journeys take 38% longer than they would in normal conditions) and traffic is one of the most common causes for noise in the city, particularly the famous Vespa bikes that speed through the streets. 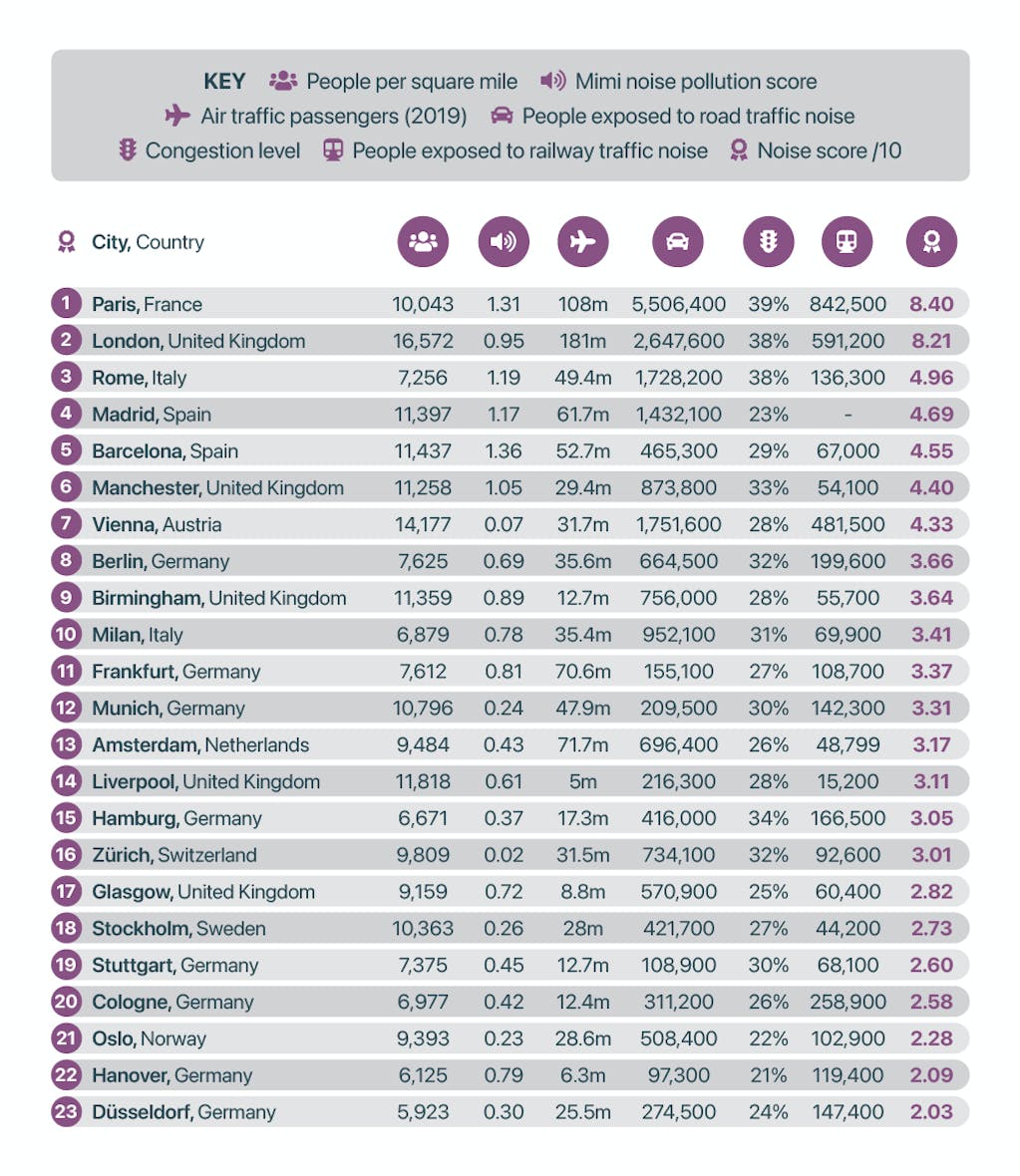 It goes without saying that the more people that populate a city, the louder it’s going to be, especially when those people are all crammed into a relatively small area. That’s the case in London, which is the most densely populated city on our list, with just over 16,500 people for every square mile.

Looking more broadly at which cities have the highest levels of noise pollution overall, our experts used Mimi’s Worldwide Hearing Index. The Index gives cities a score based on their levels of noise and hearing loss, with Barcelona having the highest on the list. The old, medieval parts of Barcelona can be the loudest, with noise echoing and bouncing off the narrow streets.

If you’re unlucky enough to live under a flight path, then the noise from low flying aircraft can be a real concern. The location with the most flights coming in and out of the city is London, with over 180 million people flying in and out of the UK’s capital in 2019. London has the busiest city airspace globally, with eight airports using the word London in their name, including Heathrow, one of the busiest airports in the world.

The rumbling of engines is one of the most common contributors to noise in cities, especially when gridlock strikes and irate drivers beep their horns in frustration. The worst city for congestion was France’s capital, Paris, with a score of 39%, which means that a journey made during rush hour will take 39% longer than it would during normal conditions. Paris also had the highest number of people exposed to 55 dB or higher when it comes to road noise at 5.5 million a day.

While traffic on the roads is obviously much more common, sounds from passing trains can be much louder and living next to a busy railway can be a nightmare that you weren’t expecting to have to face. Once again Paris scores the highest here with over 800,000 people regularly exposed to high levels of railway noise. The city is a major rail hub and is also home to the Paris Métro, the second busiest metro system in Europe.

Looking at 23 cities from around Europe, money.co.uk looked at the following seven factors, giving each city a normalised score out of ten for each, before taking an average noise score across all seven factors.

The people per square mile in each city’s urban area according to Demographia’s World Urban Areas June 2021 report.

A score assigned by Mimi in their Worldwide Hearing Index, based on noise pollution and hearing loss.

The number of passengers passing through the city’s major airports in 2019 according to various sources such as the reports on the airports’ websites, which you can view here. 2019 was chosen due to air traffic in 2020 and 2021 being heavily impacted by the coronavirus pandemic.

The average number of people that are exposed to high levels (55dB or higher) of noise from road traffic each day according to the European Environment Agency.

The congestion level for 2019 according to TomTom’s 2019 Traffic Index. This score shows how much longer a 30-minute trip would take compared to the city’s baseline uncongested conditions.

The average number of people that are exposed to high levels (55dB or higher) of noise from railway traffic each day according to the European Environment Agency. (Note that data was unavailable for Madrid for the railway noise factor, so this factor was not considered in the overall score for this city.)