The mortgage experts at money.co.uk have analysed some of the most musical cities in the world to find out where are the best places to live to catch a gig or festival.
Share this guide

The live music industry really suffered as a result of the pandemic, with most venues around the world closing their doors and festivals postponed for years on end, but as the world begins to open up again, fans are eager to see their favourite musicians.

But where are the very best cities for music fans around the world? To find out, the mortgage experts at money.co.uk analysed 30 well-known musical destinations on the following factors:

If you are a music superfan who wants to live close to the action, use our mortgage comparison to see where you could afford to live.

The best live music cities in the world 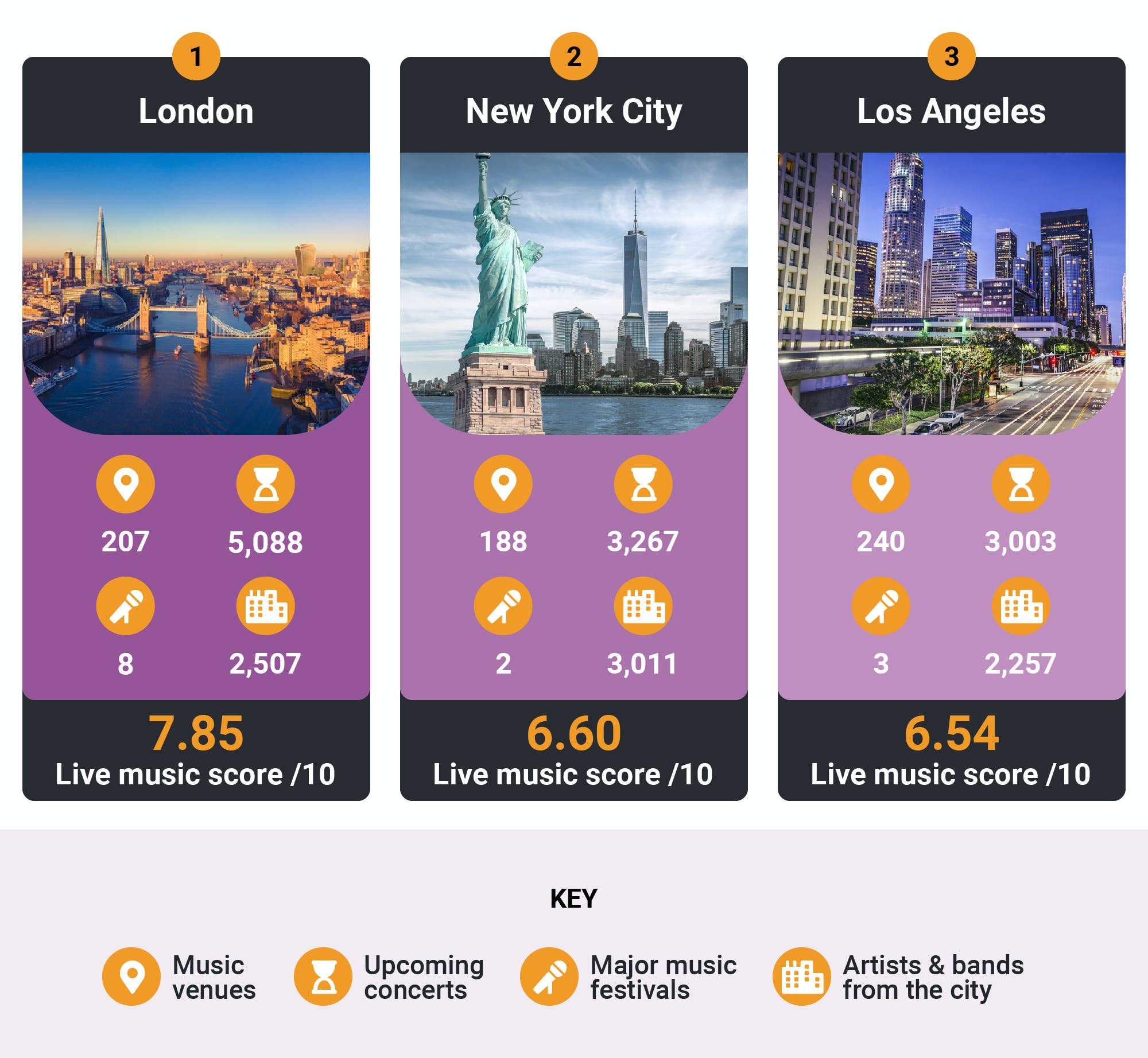 It’s one thing for a city to give birth to its own music scene, but in the case of London, the UK’s capital has created multiple different scenes right through the decades.

London has by far the highest number of upcoming concerts and also has the second highest number of music venues, ranging from traditional London pubs to the trendy clubs of Soho and the mega venues such as the O2 Arena and Wembley Stadium.

Over 2,500 major artists call the city home and they could make up a hall of fame all of their own, including legendary artists such as the Rolling Stones, Elton John, Queen, Pink Floyd and David Bowie, as well as more recent acts such as Adele, Florence + the Machine, London Grammar, and Jessie Ware.

New York’s primary attraction is the sheer number of bands and artists that have cut their teeth in the Big Apple, but it’s also known for the variety of music too, with many movements such as disco and hip-hop owing a lot to the city.

There’s something different everywhere you head in NYC, from hip-hop in the Bronx to Latin and salsa music in Washington Heights and a more avant-garde scene in Greenwich Village.

As for artists that have called New York home, the list is just as varied, including rappers like the Notorious B.I.G. and Jay-Z, punk bands like the Ramones, and bands such as the Talking Heads, the Strokes and the Beastie Boys.

Moving across to the West Coast, Los Angeles is often billed as the “Creative Capital of the World” and takes third place in our list.

The City of Angels had more music venues than any other city analysed, including the Staples Centre, the Greek Theatre, the Hollywood Bowl, and many many more.

The city is also a breeding ground for musical talent, whether it was the likes of the Beach Boys in the 60s, the hard rock bands of the 80s and 90s Mötley Crüe and Guns N’ Roses and Motley Crüe, or rap artists like N.W.A. and many modern pop acts.

The top 10 live music cities in the world 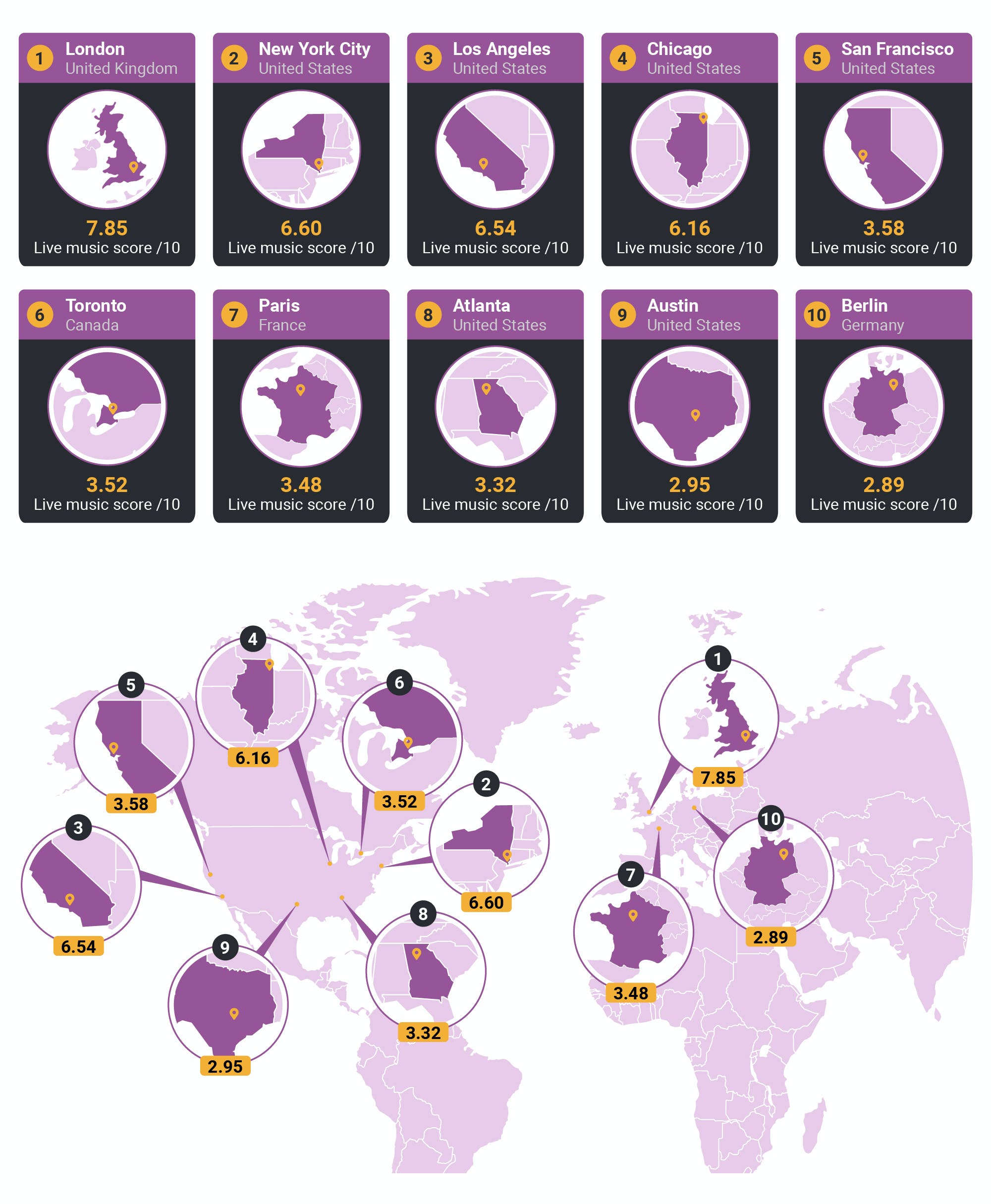 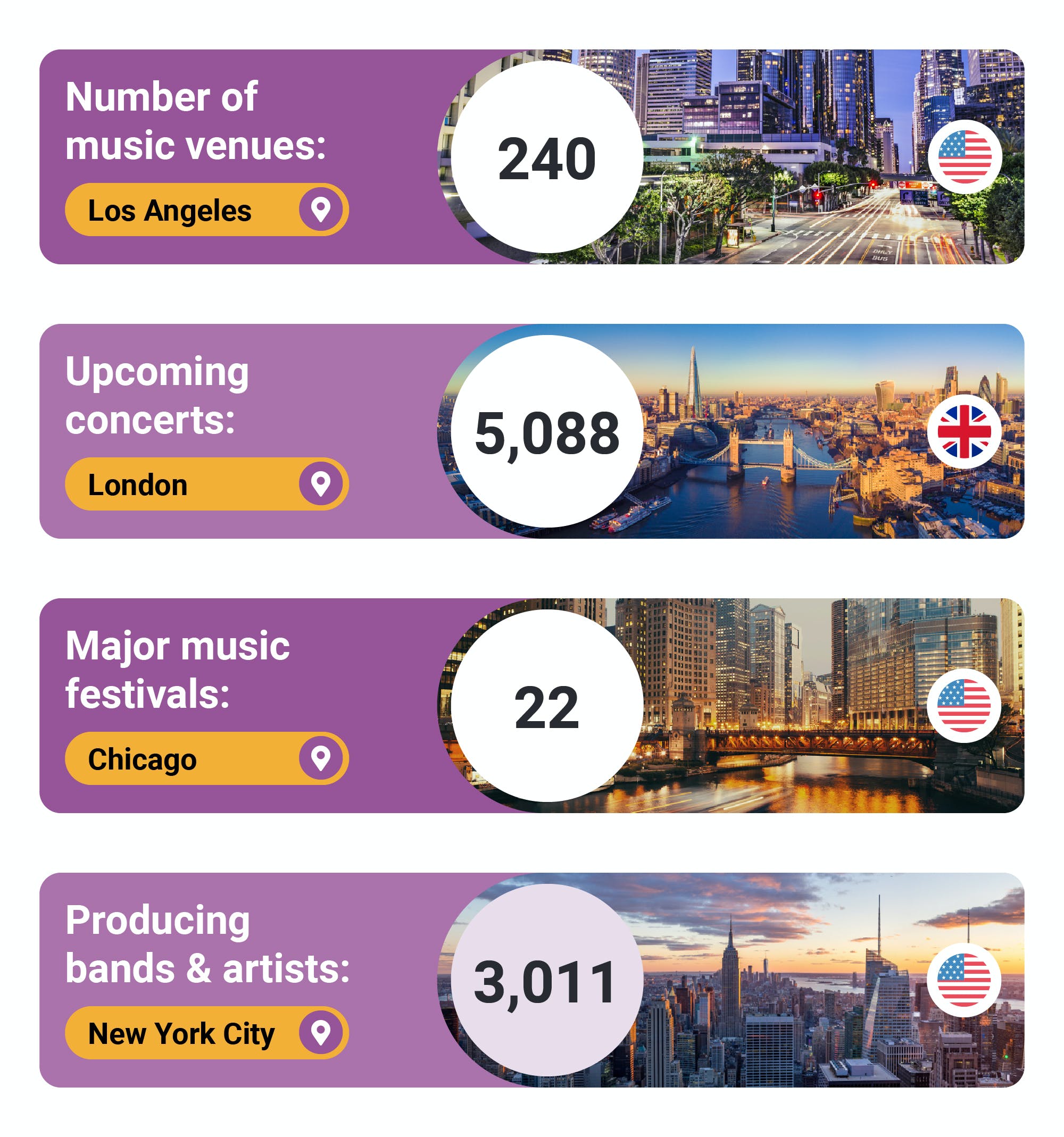 LA is home to at least 240 music venues, ranging from the stunning outdoor amphitheatre the Hollywood Bowl to historic clubs like the Troubadour and huge arenas like Dodger Stadium. Alongside these iconic ensues the city is also home to many lesser-known clubs and bars where you can find up and coming talent too.

With restrictions lifted in many places, live gigs are back on the cards, and it’s London that has the highest number pencilled in (and by some distance). Among the 5,088 upcoming gigs in London are anticipated shows from the likes of Billie Eilish, Elton John, and the recently announced tour from Ed Sheeran.

Chicago is home to a huge number of major music festivals each year, the most notable of which is Lollapalooza, which is one of the biggest and longest-running festivals in the country. However, the city is also home to the famous Chicago Jazz Fest, Pitchfork Music Festival, Chicago Blues Festival and many others.

Few cities can match New York for its output and breadth of talent, having given us some of the best and most iconic acts of all time. To name a few, New York is the home of Lady Gaga, the Velvet Underground, Sonic Youth, Alicia Keys, Blondie, Madonna, and many more.

The best city for each genre

While all of these cities have a vast variety of genres and styles to enjoy, some are more well known for being associated with certain genres than others, so here are the cities where concerts from each genre make up the biggest share of the current scene. 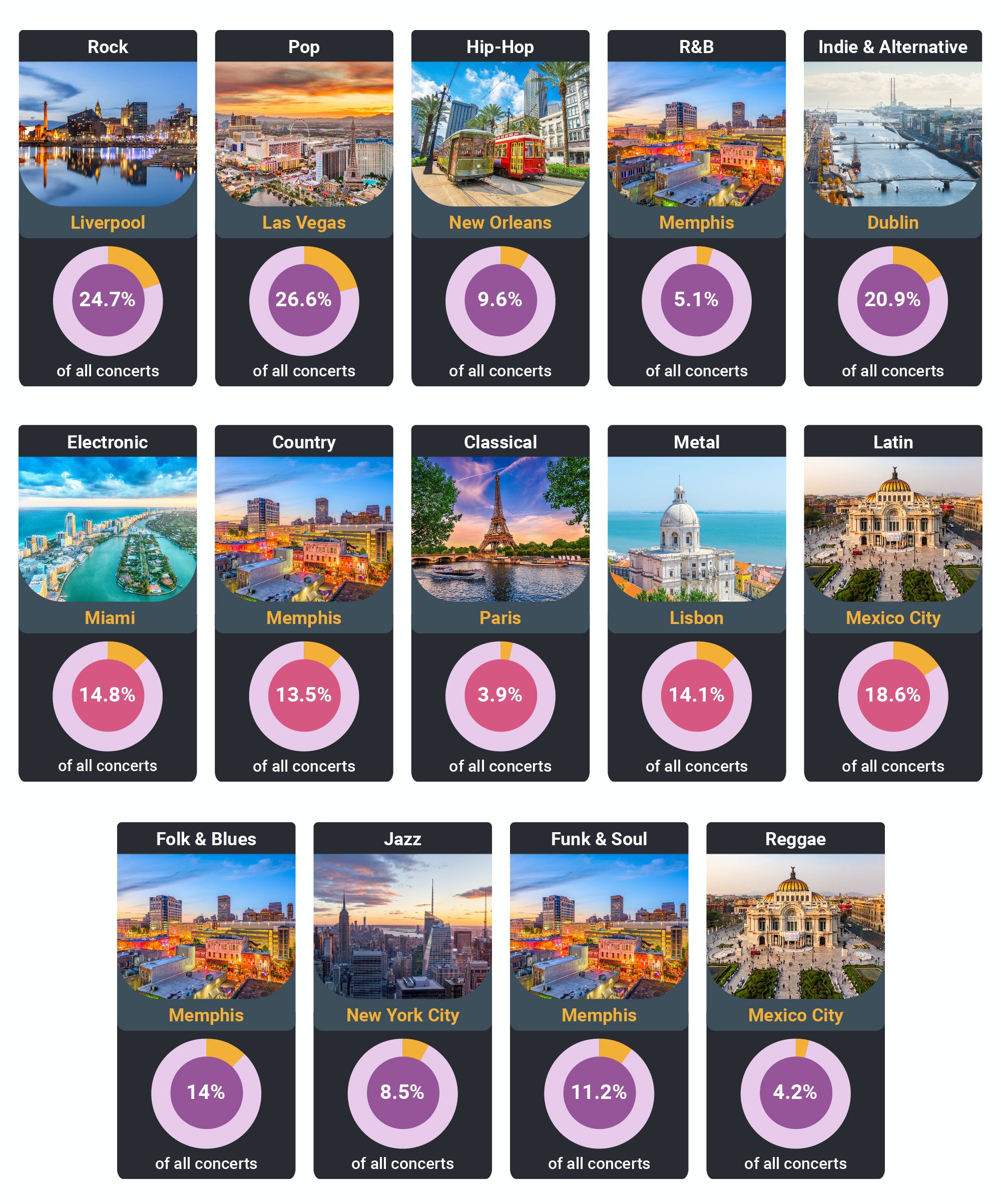 As the birthplace of arguably the greatest rock band of all time, it shouldn’t be surprising that just under a quarter of gigs in Liverpool are rock and roll shows. While the Merseybeat era may have ended long ago, Scousers clearly still love their rock music, from venues such as the historic Cavern Club right up to the 11,000-seat Echo Arena.

By far the city that hosts the most pop concerts is Las Vegas, with 26.6% of all gigs in the city falling under the genre, far more than Montreal, which came in second with 18.9%. While Sin City might not necessarily have a huge music scene of its own, the number of glitzy venues and casinos draw the best artists from all over the world, which may explain the high share of pop acts.

While predominantly known for jazz, New Orleans also has a strong hip-hop heritage, developing its own localised “bounce” scene, as well as artists such as Lil Wayne and Cash Money Records. The genre is clearly still popular in the city, accounting for a higher percentage of concerts than in any other city.

Memphis is another city that is perhaps better known for its association with other genres, but at its heart is a city that just loves music, and it was here that R&B made up the greatest share of concerts, with 5.1%.

Miami has been one of the country’s dance music hotspots as far back as the 1970s, helped by the diverse nature of the city and the influences that it brings. Today the city has thriving techno and EDM scenes and hosts the Winter Music Conference, the biggest dance event in the world, as well as the Ultra Music Festival.

While neighbouring Nashville is perhaps better known for its country scene, Memphis is the city where country music makes up the largest number of local gigs, with 13.5% (compared to 11.9% in Nashville). It’s also interesting to note that there’s a direct split, with no countries from outside the US having a bigger share of country gigs than those in the states.

In almost a direct reversal of country music, each of the countries with the highest share of classical music concerts was in Europe, with Paris having the most. Paris is home to leading institutions such as the Orchestre de Paris and the Paris Conservatory, as well as the Cité de la Musique.

Metal music largely proved to be more popular in Europe, particularly in Lisbon. The metal scene in the city is focused around the Bairro Alto district, and every two years the city hosts the Rock in Rio Lisboa festival which regularly attracts famous metal acts.

By some distance (and unsurprisingly), Mexico City had the highest share of Latin music gigs, with 18.6%. Venues in the city include the 10,000-seat National Auditorium, Teatro Metropolitan, Palacio de los Deportes and more.

Another genre that proves popular in Memphis is folk and blues, particularly when it comes to blues. Historic blues clubs line Beale Street, with the city producing its own “Memphis blues” sound in the first half of the 20th century.

While the likes of New Orleans and Chicago are known for their jazz scenes, it was New York that had the highest proportion of jazz gigs (8.5%). NYC was a hub of the jazz scene in the 1940s and today there are a host of jazz clubs to enjoy.

Yet another genre proved to have a home in Memphis, this time funk and soul. Soul is another genre that Memphis has lent its name to, with the Memphis soul genre being borne out of the likes of Stax Records in the 1960s.

Reggae was among the least popular genres in the 30 cities analysed, but the place hosting the highest percentage of reggae gigs was Mexico City, with 4.2%.

To begin, a preliminary list of cities known for their music scenes was sourced using a variety of online list articles*, omitting cities in countries such as Japan and Australia where COVID restrictions are still in place.

Each city was then given a normalised score out of 10 on the following four factors, before taking an average across all four scores to arrive at our final live music score out of 10.

Bands & artists: The number of bands and artists that come from the city, according to AllMusic.