A visual guide to banknotes around the world

In our day to day life we probably don’t pause to look at banknotes much. We’re usually quickly using them to pay for something or maybe belatedly stuffing one in a birthday card for a family member. 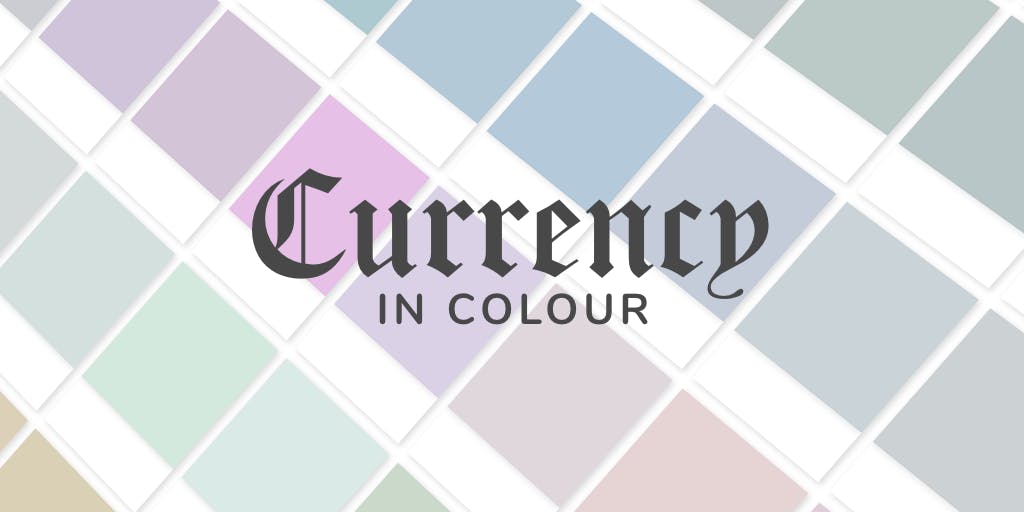 The colour of currency

Whilst experts predict that by the end of the decade less than one in ten payments will involve cash, and the current coronavirus crisis has seen a sharp halt to consumers paying with physical money, chances are with 3.9 billion UK banknotes in circulation alone, it’ll be a long time before we put our wallets/purses away for good.

Most of us probably don’t pay much attention to the colourways and designs of banknotes but there has been extensive conversation in the media over the last few years about UK banknotes going ‘plastic’ and also debate over who what sorts of people should feature as a banknote character.

This debate is not unique to the UK, and so here at money.co.uk we wanted to understand the DNA of individual currencies, more specifically their banknotes, and how they differ around the world.

As part of our study, we analysed 157 currencies in circulation, taking note of everything from their dominant colours, the profession of the feature figure, gender representation and the appearance of any buildings or animals. This in turn helped us to determine the most common and rarest features of banknotes worldwide.

The colour of currency map

Arguably the most internationally recognised currency colour, the green ink used to print US Dollar banknotes was originally chosen to prevent photographic knockoffs in the 1860s. But how do the chosen colours of currencies differ around the world?

To ascertain the dominant colour of each currency and provide a fair comparison, we analysed the most popular note in each country, or the denomination closest to a £20 note (the most widely circulated note in the UK) where circulation figures weren’t available.

Explore our interactive map below to discover the most dominant colour of each currencies’ banknotes, as well as the most commonly featured components of all their notes combined.

Pantone Colours of the Worlds Currencies

To determine the HEX and Pantone codes of each currency we fed all images through HEX Picker software, Colour Thief, and matched that to colour names using script from Colour-blindness.com.

Discover the universal Pantone colour palette and code for each currency below. Use the switch to view both an A-Z of currencies or sort by hue.

The DNA of Banknotes

Our analysis revealed the most common colour used on banknotes is in fact green, with currencies including the aforementioned US Dollar, as well as the Swedish Krona and Uruguayan Peso all featuring various shades.

When it comes to the famous people featured on banknotes, their occupations vary greatly depending on the currency and value of note they appear on. However, our analysis of 1,383 banknotes featuring a person revealed 547 political figures, 320 royals and 153 writers.

Perhaps unsurprisingly, Queen Elizabeth II is the most popular figure on banknotes, having featured on 45 different note designs across 11 countries. 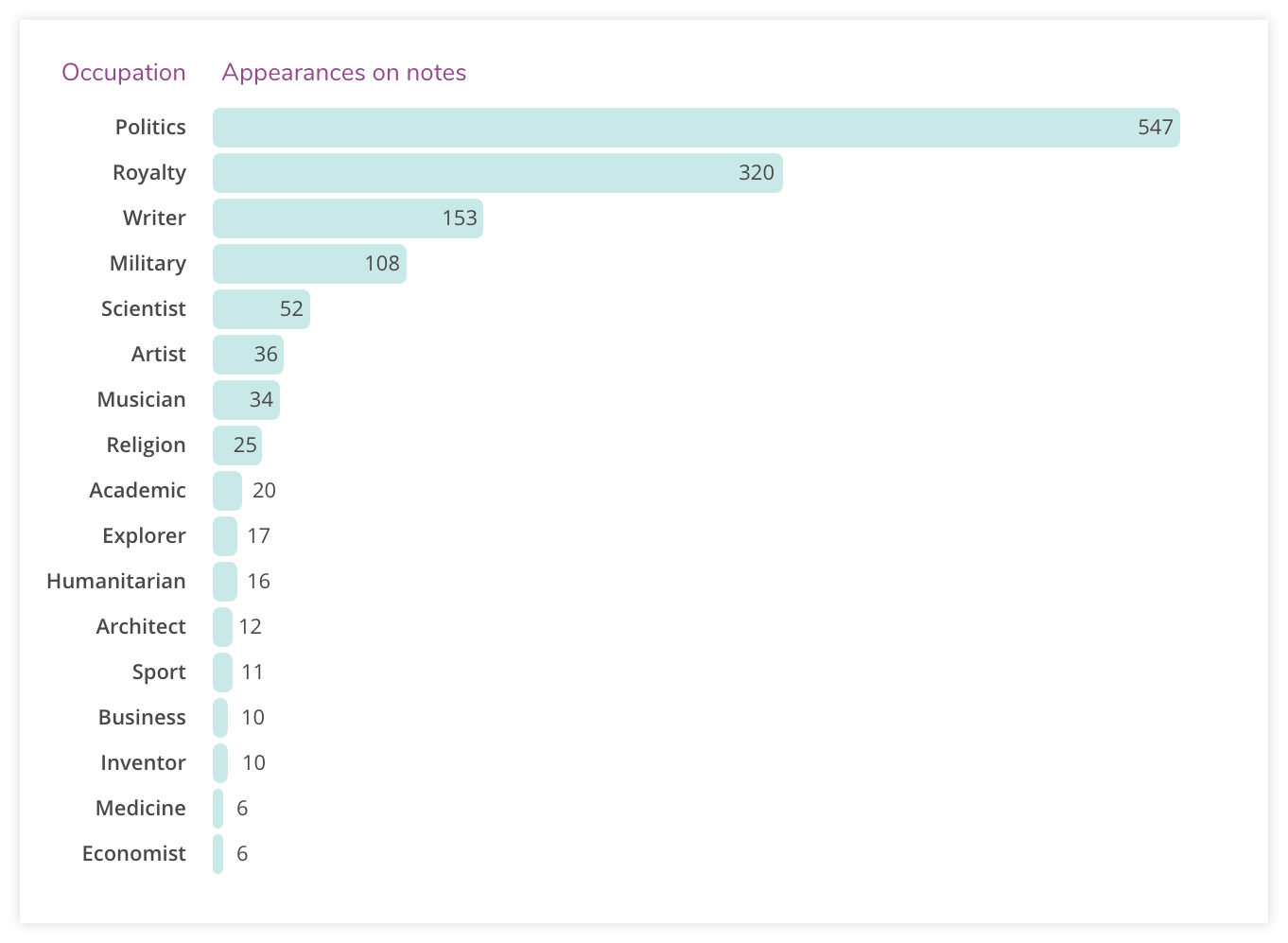 Queen Elizabeth II may be the most popular figure featured worldwide, but our study revealed a clear lack of gender representation across banknotes, with just 7% of the notes analysed featuring a female figure.

In fact, only Jersey, the UK and Australia have a balanced or female favoured gender profile, with all other currencies predominantly featuring males

Back in 1988 Australia issued the first polymer note, to coincide with their bicentennial year and since then over 30 countries (25%) have either completely switched or began to introduce polymer notes into general circulation. 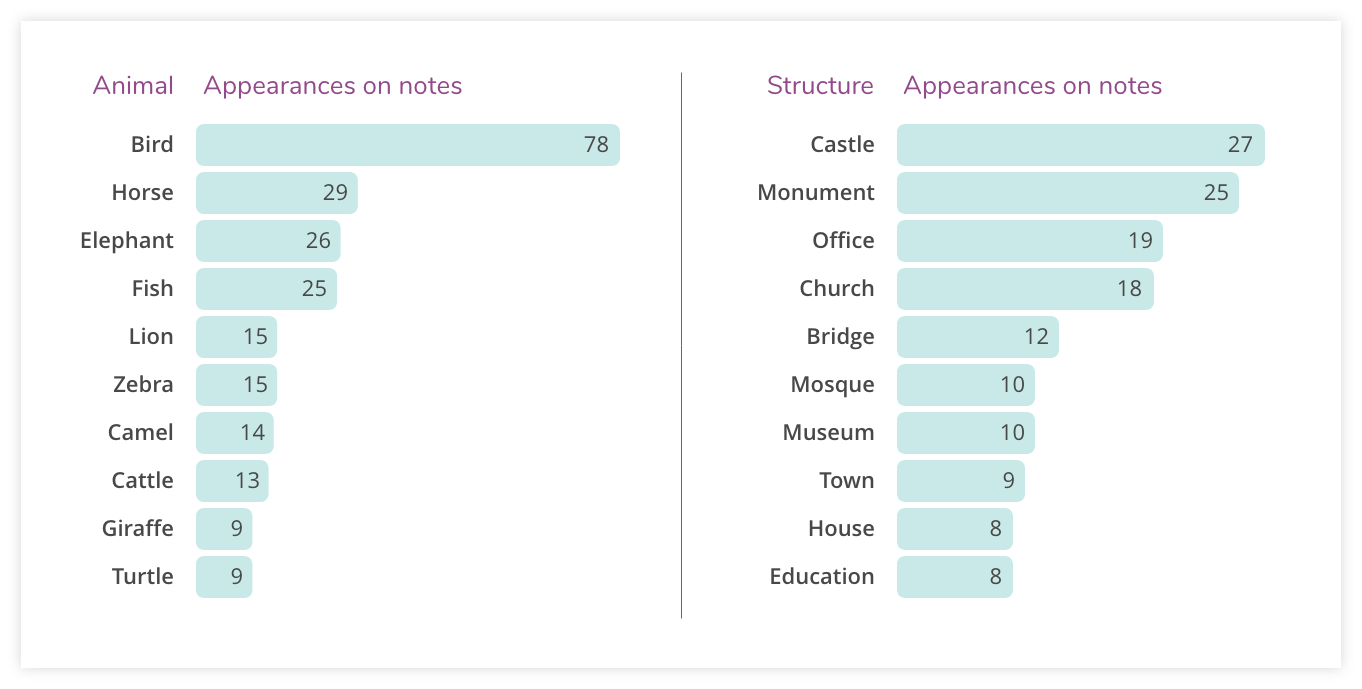 Following people, both animals and buildings also feature regularly across banknotes worldwide, with 315 notes featuring 35 different types of animals, including 13 variations of birds and 212 notes featuring a variety of buildings.

Whilst its clear banknote designs differ greatly around the world, our study got us thinking, what could a global note potentially look like?

Taking into consideration our learnings and the commonalities found in all of the 157 currencies, we’ve created the ‘Globos’, a fictional currency featuring the most popular component found in each stage of our analysis including: 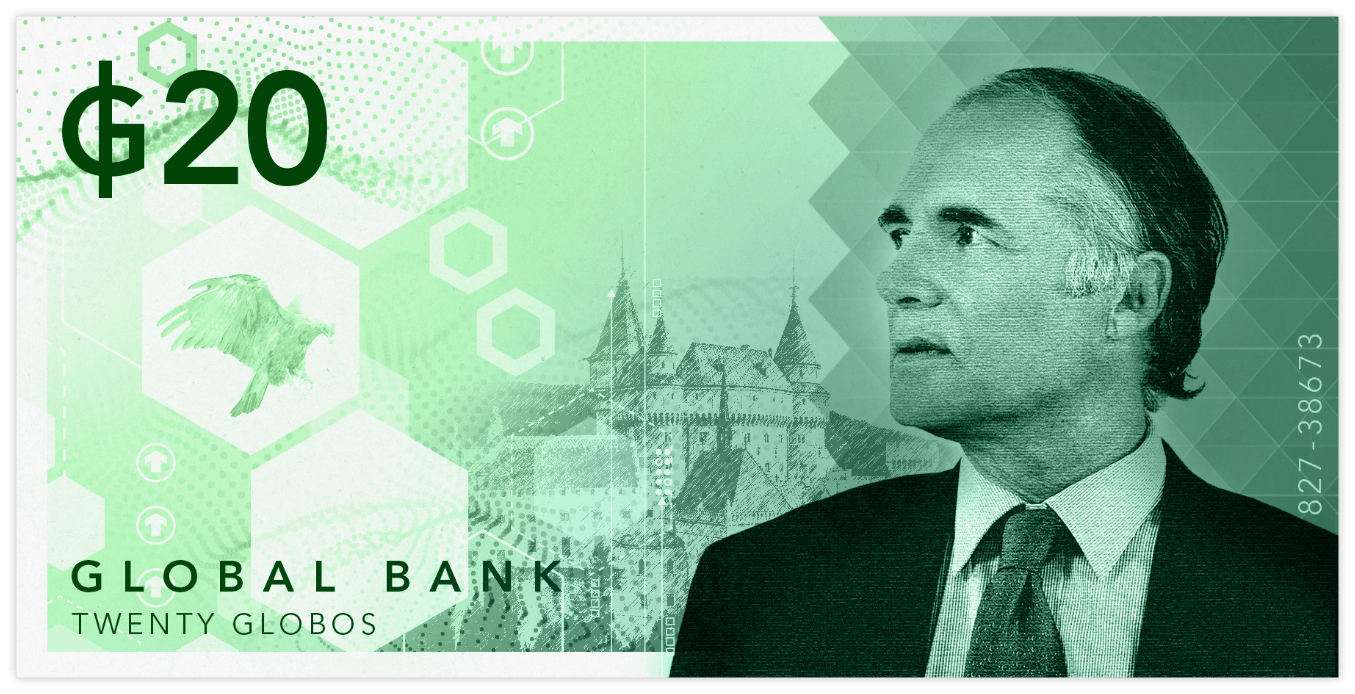 Looking for a new place to store your money? Compare the top ten current accounts and savings accounts and find the best option for you.

We conducted desk research to build a list of currencies currently in circulation around the world, we then used a number of sites including Wikipedia, government resources, travel sites and archives to map out key components of notes such as professionals, gender representation and the appearance of buildings & animals on banknotes.

To ascertain the HEX codes of each currency, we first downloaded an image of either the most popular note in each country, or the denomination closest to a £20 note (which is currently the most widely circulated note in the UK). We then fed all images through HEX Picker software, Colour Thief, and matched that to colour names using script from Colour-blindness.com.

Data includes currencies that are currently in circulation and all past iterations thereof. Where a currency is now no longer used (as is the case in many countries in the EU), the previous currency (i.e. the French Franc) has not been analysed. The analysis only covers banknotes and doesn't cover coins or other forms of currency.