It’s clear that the future of driving is green. But what does that mean for our heroes of the silver screen? Will Batman need a row of superchargers for his fleet? Will James Bond need to stop for a battery boost while grabbing a coffee and pasty in Greggs as he hunts down SPECTRE? Would ‘Herbie the love bug’ just be the autopilot setting?
Share this guide

With the Hollywood reboot machine ever turning, the car insurance team at money.co.uk has taken a look back at some of the most iconic movie and TV cars of all time, to see how they might look with an all-electric makeover.

If you've bought a new car and need to get insured, you may want to compare car insurance. 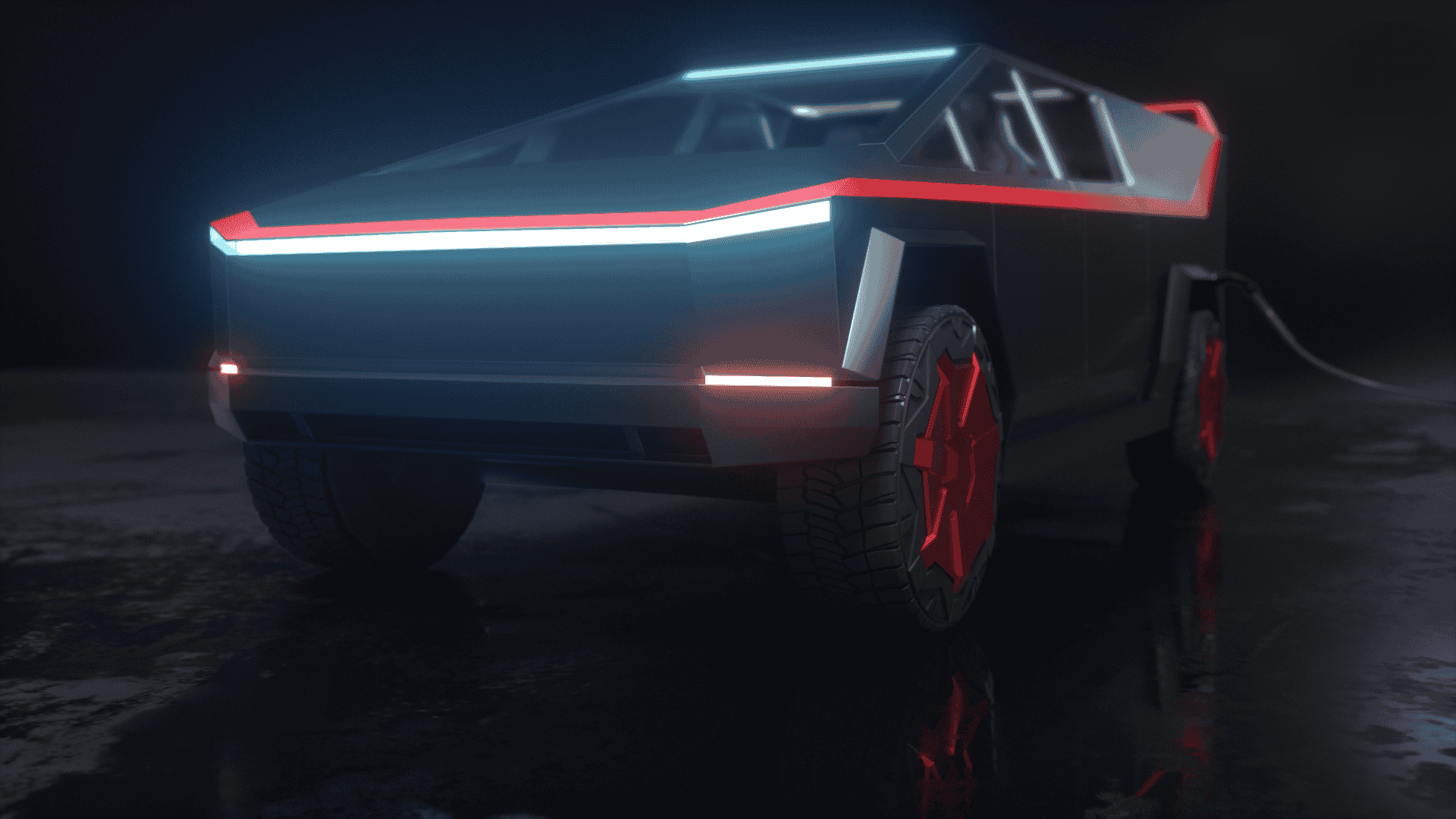 We pity the fool who doesn’t want to reduce their carbon emissions.

The A-Team first exploded onto our screen in 1983, spawning generations worth of merchandise, memes and of course, catch-phrases, and sky-rocketing the career of Mr. T.

Centred around a group of heroes who had been convicted of a crime they did not commit, for nearly 100 hundred episodes, the A-Team would save the day in 30 minute instalments in their iconic van, a bit like Scooby-Doo, but with guns and gold chains.

While a revival in 2010 fronted by Bradley Cooper didn’t quite catch on, the A-Team van remains one of the most iconic TV and movie cars of all time. Originally a GMC Vandura, which ran production from 1964-1996, our reboot takes inspiration from the upcoming Tesla Cyber Truck, allowing the E-Team to supercharge their van in between their escapades. Does anyone else feel like a limited edition Tesla? Make it happen Elon! 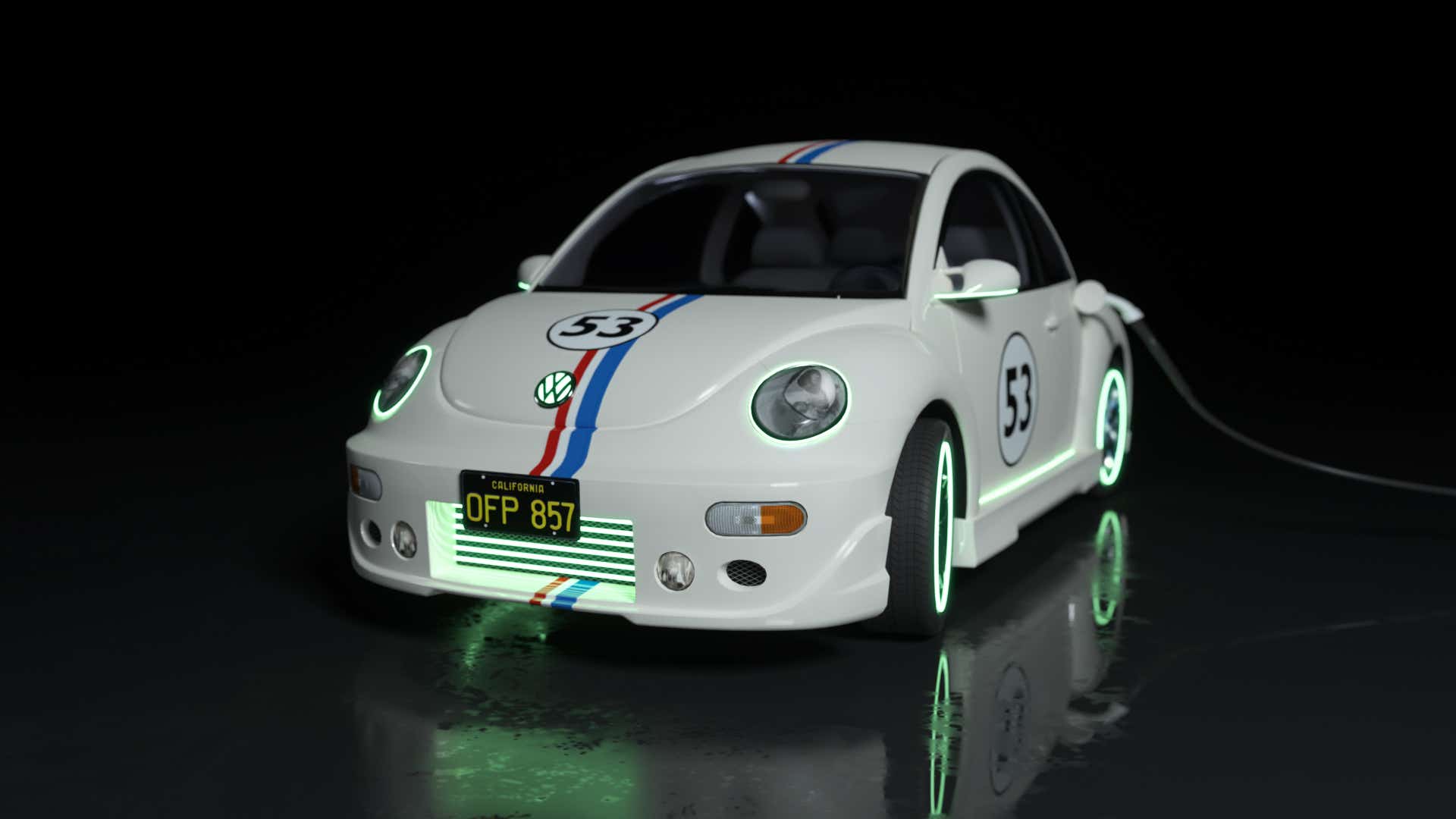 The Beetle first rolled off the production line in 1938 and became an iconic vehicle in both Europe and America until it was sadly discontinued by Volkswagen in 2019.

A firm favourite of amateur classic car enthusiasts, your Mum when she was younger, and older couples with pampas grass in the garden, the Beetle is probably most famous for its association with the 1968 Disney mega hit ‘The Love Bug’, which gifted the car it’s iconic status as a quintessential symbol of 60’s and 70’s.

In fact, 1968 was a peak year for the Volkswagen Beetle as they flew off the assembly line due to the popularity of the movie, which spawned a series of films featuring the Herbie character.

Our E-tle concept oozes cool and 60’s chic, while staying true to the ‘flower power’ essence of the 1960’s. With Volkswagen firmly declaring their future as electric, with it’s new I.D range and success of the E-Golf, we’re hoping that our concept E-tle might not be too distant of a dream. 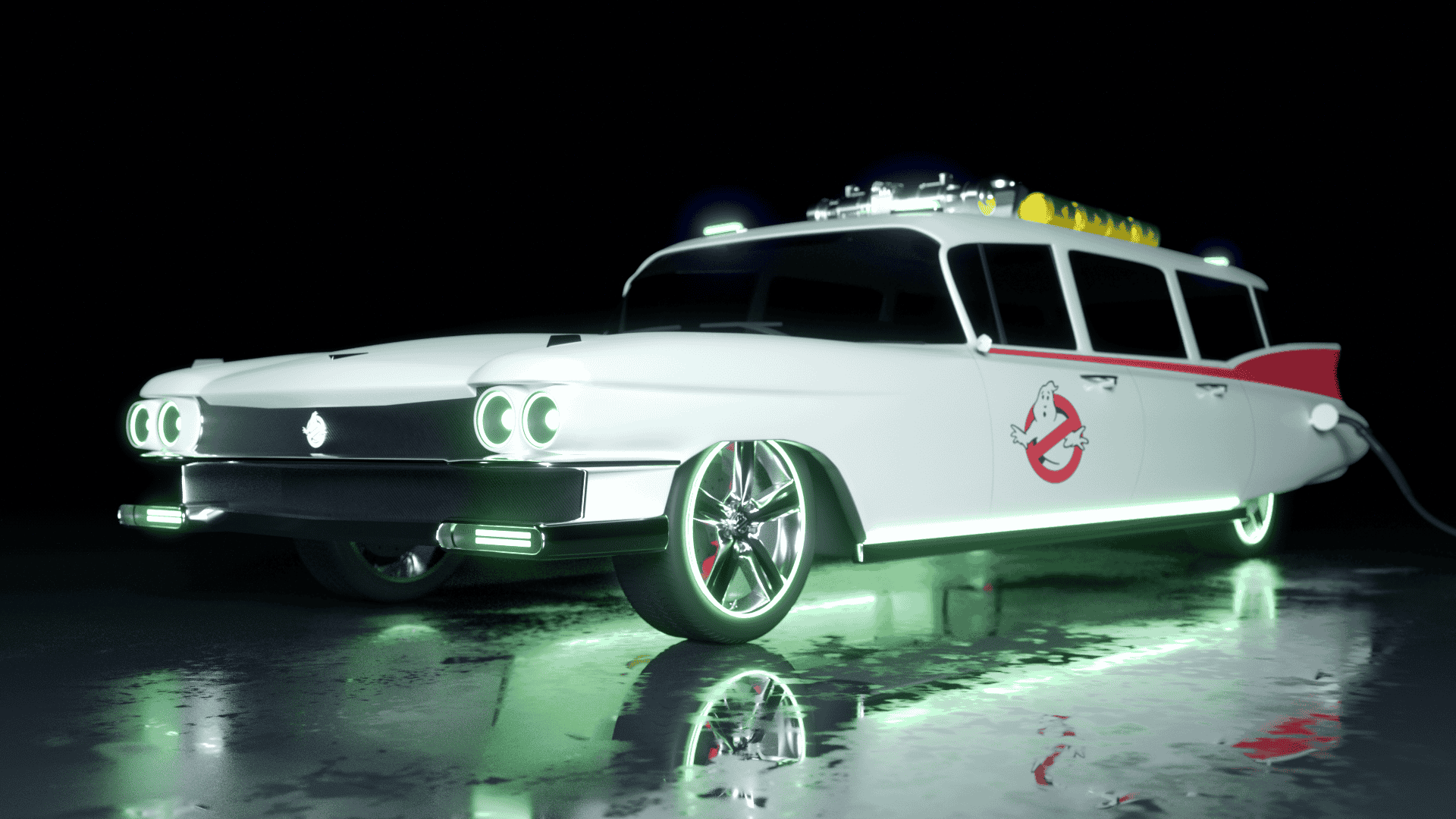 When there’s fossil fuels in the neighbourhood, who you gonna call?

Keeping the streets of New York safe from ghosts, ghouls and giant marshmallow men, Ghostbusters saw Bill Murray, Dan Aykroyd, Rick Moranis and Harold Ramis don their boiler suits and save the day in their 1959 Cadillac, the ‘Ecto-1’.

Created by Stephen Dane, the Ecto-1 would become an iconic symbol of the team that ‘ain’t afraid of no ghosts’, featuring in multiple movies, comic books, video games, merchandise and TV series over the past 35 years. It most recently appeared in the Ghostbusters reboot in 2016 and upcoming Ghostbusters: Afterlife starring Paul Rudd.

While the new movies still feature a petrol powered ghostbusting machine, we opted to give our heroes a cleaner, greener way of saving the city, with Slimer approved (and inspired) lime green lighting. 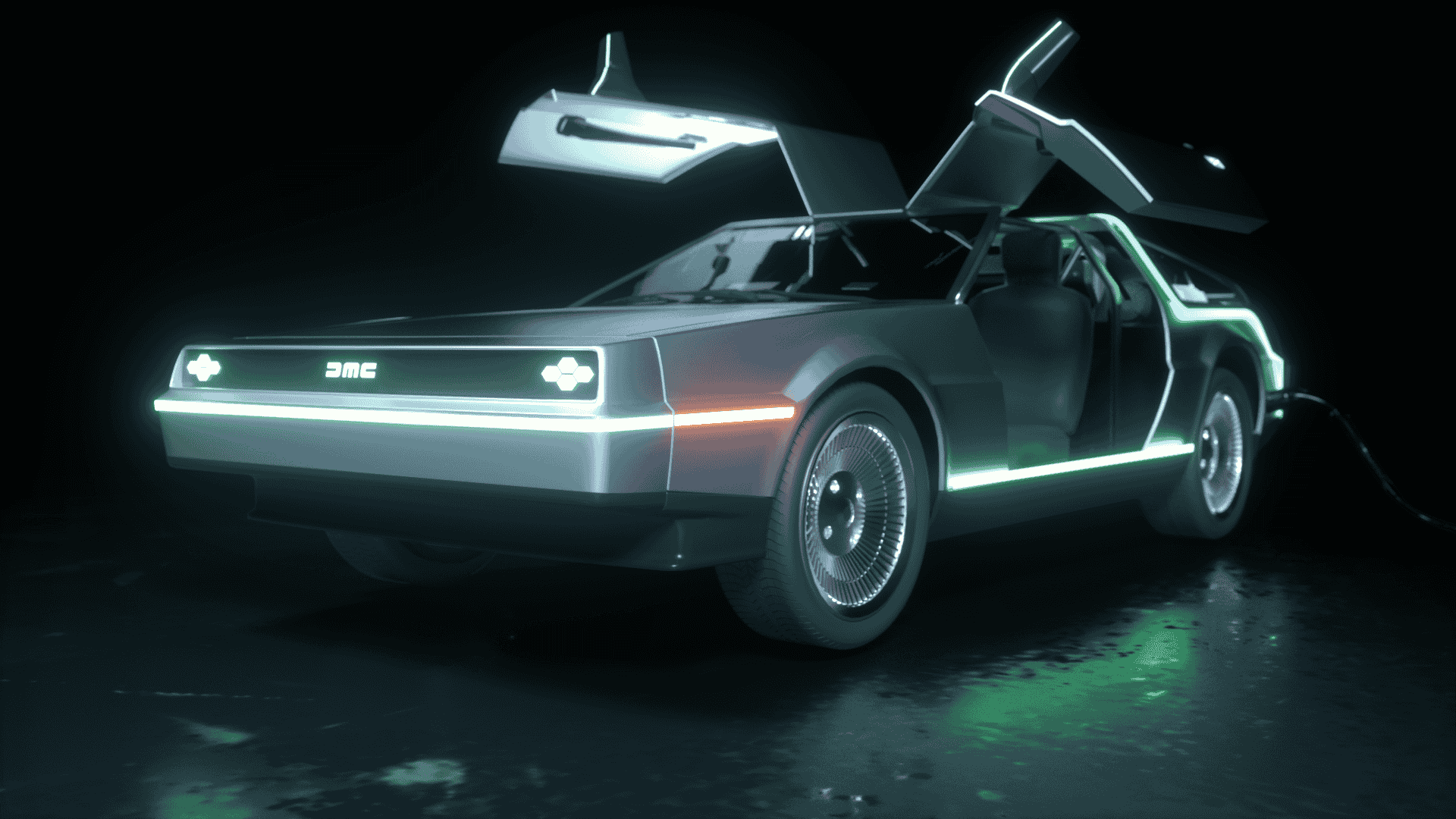 The 1985 classic Back to the Future immortalised the DMC Dolrean as Doc Brown’s plutonium powered time machine that sent Marty McFly back in time to save the day… and have his mother hit on him, but hey, it was the 80’s!

Brainchild of John Delorean and Giorgetto Giugiaro, the DMC Delorean featured in the movie series lasted for just two years of production, before DMC closed its doors due to bankruptcy.

Unfortunately, perhaps too ambitious and futuristic for the 1980’s, the Delorean, which featured a stainless steel body and its iconic gull wing doors was never able to capture the hearts of the public and was also plagued with criticisms of poor build quality and numerous mechanical issues.

These days, the Delorean has enjoyed cult appeal and is still popular with collectors due to its short life span and association with the franchise. While rumours of a Back to the Future reboot have never come to fruition, with our 2021 concept E-Lorean we hope Doc Brown might one day fire up the ‘Musk Capacitor’ to go back to the 80’s and warn DMC. 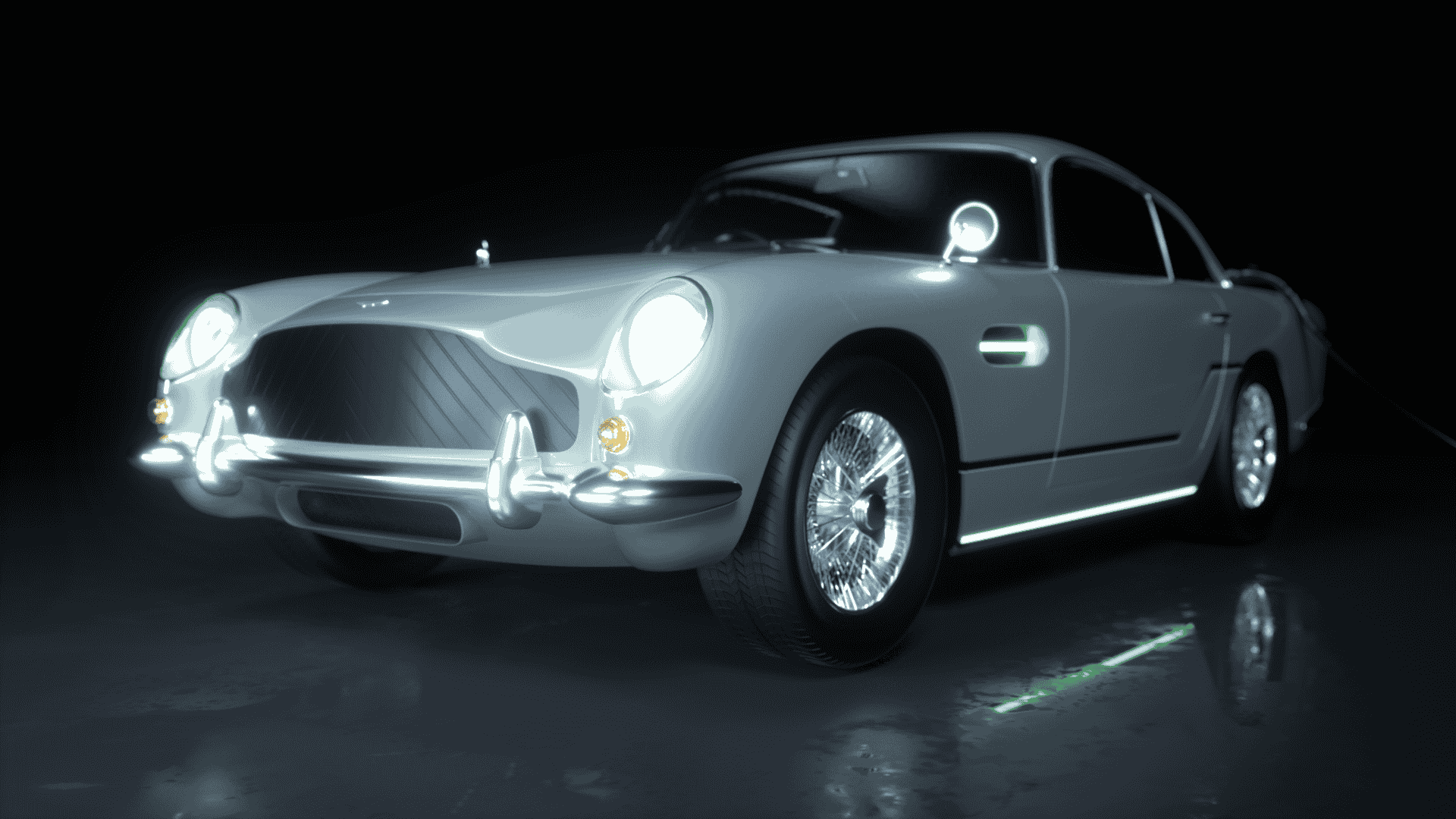 “No, Mr Bond, I expect you to invest in a low carbon vehicle fleet”

True, 007 has driven many cars over the years (including the BMW Brosnan era which sparked a decade of sales managers in Z-Series), but the Aston Martin DB5 is perhaps the most ‘James Bond’ car of the bunch.

The exclusive grand tourer first produced between 1963-1965, with 25 more commissioned in 2020 for the upcoming No Time to Die, is the personification of classic British cool.

Highly sought after collectors’ cars, these days the DB5 is relatively rare on the open market and they fetch easily upwards of £650,000 or even £1 million, depending on the condition and heritage of the car.

Unless you’re James Bond or Q and you’re fitting rocket launchers or an ejector seat to it, it’s probably best to leave the iconic DB5 alone. Our EB5 retains all the classic features of the car, with just a touch of EV styling and modern curves, including a Porsche style front storage trunk for gadgets or golf clubs. While we’d love to see one on our driveways one day, we think it’s safe to say that this might just split opinion.

Whether your car is electric, or petrol powered make sure you’re not overpaying for your car cover. With our car insurance comparison service you could pay just £495.61* a year or less for your cover by comparing quotes from a range of providers.

*51% of customers received a quote of £495.61 or less for Comprehensive Insurance between January and March 2021. The savings you could achieve are dependent on your individual circumstances and how you selected your current insurance supplier.