Our pensions experts rank the most LGBTQ+ friendly retirement destinations in Europe and the US, according to how progressive the laws and legislation are.
Share this guide

There has been a growing interest in retirement communities built specifically for those who identify as LGBTQ+, with the first one in the UK set to open in Vauxhall, London in 2021.

These communities are being set up to help LGBTQ+ pensioners feel more comfortable and live among like-minded people as they enjoy their later years.

Compare private pensions with money.co.uk and you could find a plan to help your money go further when you retire.

How do the most popular retirement destinations in the US and Europe stack up when their LGBTQ+ rights are compared?

Our pension experts have taken a seed list of the Europe’s top retirement destinations from the 2020 Natixis Global Retirement Index and scored them based on how long 10 different LGBTQ+ rights and laws have been in place*. 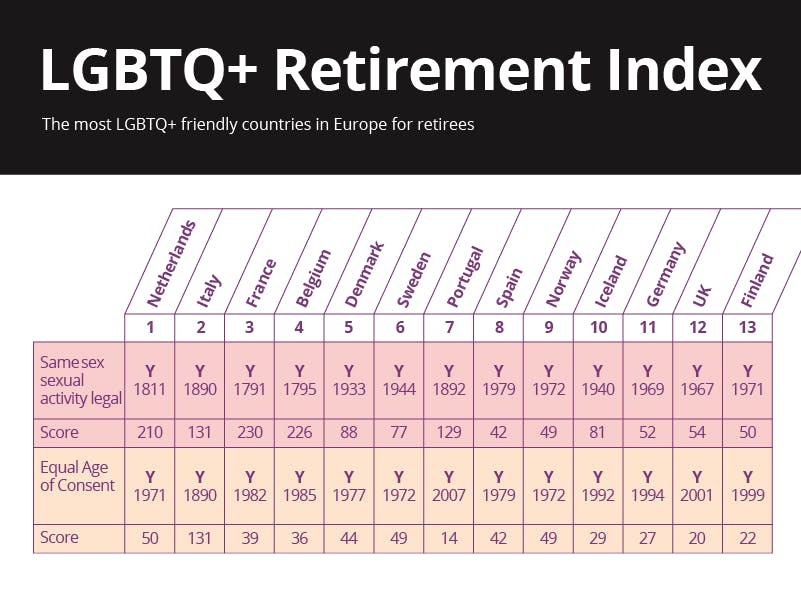 With an LGBTQ+ friendly index score of 361, the Netherlands tops the list of countries for LGBTQ+ pensioners to retire to. As one of the first European countries to legalise same-sex marriage, the Dutch are well-known for being one of the most progressive nations for LGBTQ+ rights.

More recently, in July 2020, it was announced that the Netherlands would be the first country in the world to abolish gender markers on official identity documents from 2025. Although, the Dutch have been able to access gender-neutral passports since 2019.

Throughout Europe, LGBTQ+ rights and legislation vary greatly and our heatmap reveals the countries that have been progressively improving rights for LGBTQ+ people in their community for the longest time, and also those who have some way to go to catch up. 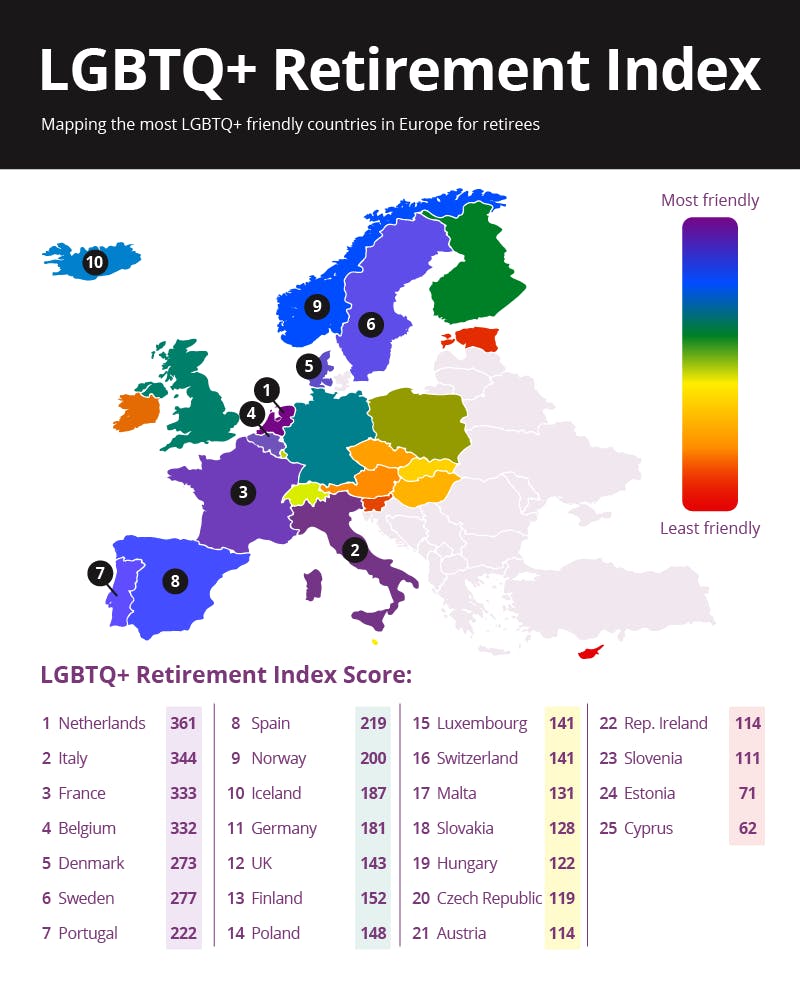 Scoring just 143 points on the index ranking, the UK takes 12th place in Europe for LGBTQ+ rights for retirees. While same-sex unions have been recognised in the UK since 2005, it has taken until 2014 for same-sex marriage to be permitted, meaning that the UK could only score seven points in this area.

However, this year and for the first time ever, LGBTQ+ people in the UK will record their sexual orientation and gender identity in the census, which is a big step forward for LGBTQ+ rights in the UK.

It could be argued that Amsterdam should be considered the historic home of LGBTQ+ rights in Europe.

Homosexuality was decriminalised in the Netherlands in 1811, and the first legal gay bar followed in 1927. One of the world's first gay rights organisations, the COC, was founded in Amsterdam in 1946.

The capital city unveiled the first-ever Homomonument in 1987 as a tribute to the many gays and lesbians who lost their lives during World War II. Amsterdam became the first city outside North America to host the Gay Games in 1998.

As the Netherlands was the first country in the world to legalise same-sex marriage in 2001, the Mayor of Amsterdam officiated the first legal gay and lesbian nuptials in the capital city.

Same-sex civil unions and unregistered cohabitation have been legally recognised since June 2016.

In Italy, both male and female same-sex sexual activity have been legal since 1890, when a new Penal Code was promulgated. A civil union law was passed in May 2016, providing same-sex couples with many of the rights of marriage.

Transgender people have been allowed to legally change their gender since 1982.

LGBTQ+ rights in France have been among some of the most progressive in the world.

Since 2017, transgender people have been allowed to change their legal gender without undergoing surgery or receiving any medical diagnosis.

Belgium is considered a liberal country regarding LGBTQ+ issues and attitudes toward granting same-sex marriage high above the EU average.

Same-sex sexual activity was legalised in 1795, with an equal age of consent, except from 1965 until 1985. After granting same-sex couples domestic partnership benefits in 2000, Belgium became the second country in the world to legalise same-sex marriage in 2003 and the right to adopt children in 2006.

In Denmark, same-sex sexual activity was legalised in 1933, and since 1977, the age of consent has been equally set to 15, regardless of sexual orientation or gender.

Denmark was the first country to grant legal recognition to same-sex unions in the form of registered partnerships in 1989. LGBTQ+ people are also allowed to serve openly in the Danish military.

The top US states to move to for LGBTQ+ pensioners

LGBTQ+ rights vary greatly by state and jurisdiction, meaning that it’s clear to see which states have been prioritising LGBTQ+ rights for the longest, and the states that are starting to catch up. 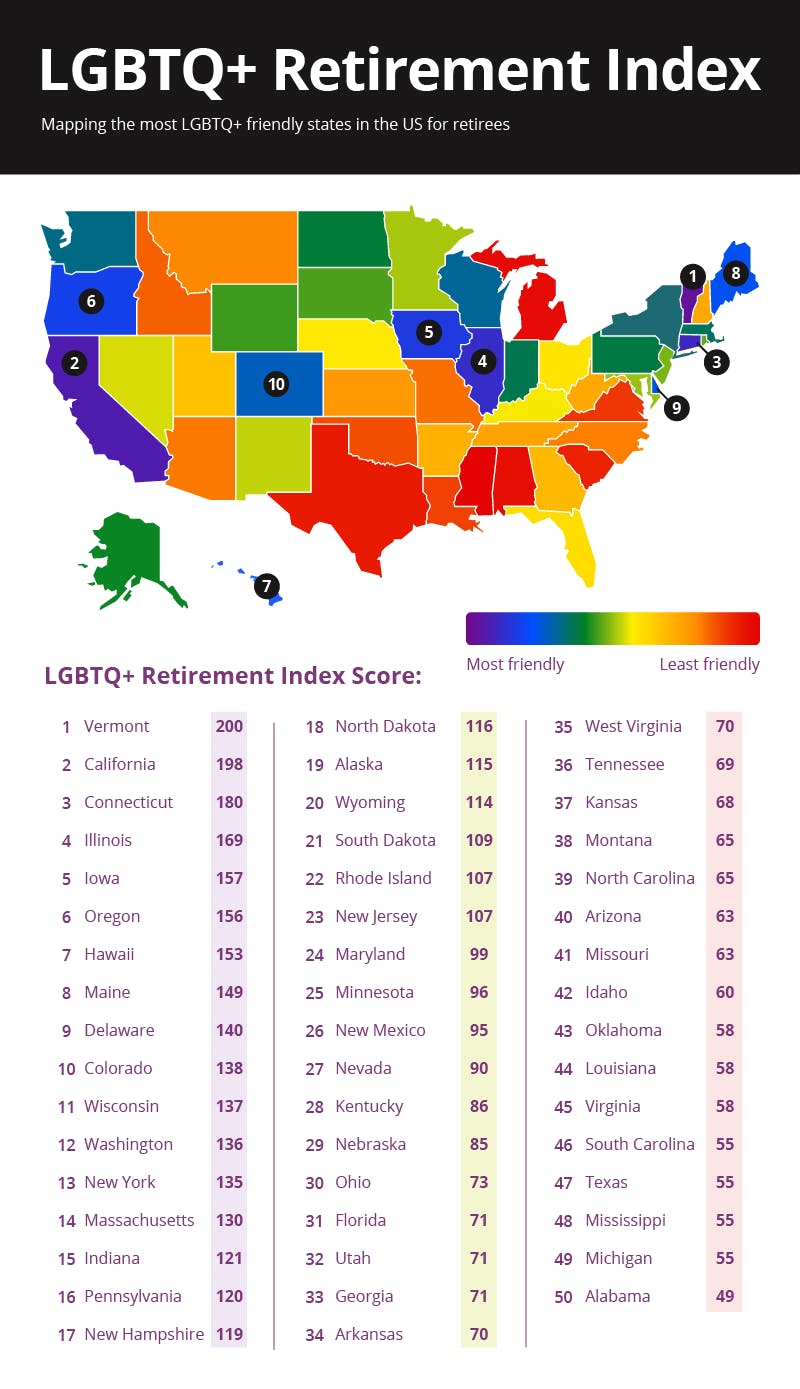 With an LGBTQ+ friendly index score of 200, Vermont is the top state in the US for LGBTQ+ retirees. Same sex marriage in Vermont has been legal since 2009 and the state has had a LGBTQ+ friendly ID policy since 2019 - meaning that drivers licences in the state can easily be amended to show a different or neutral gender.

California comes next, scoring 198 points on the LGBTQ+ retirement index for the US. The state is on the road to equality, scoring high as one of the first states to have anti-discrimination laws in every area, including employment, since 1992.

Interestingly, New York and Washington are lower on the LGBTQ+ index than we might expect. New York celebrated its 50th anniversary of the NYC Pride March in 2020, but scored fairly low for areas such as LGBTQ+ friendly ID policy and anti-discrimination laws which were not enforced in full until 2001.

Vermont is often regarded as one of the most LGBTQ+ friendly states in the country.

The establishment of LGBTQ+ rights in Vermont is a recent occurrence, with most progress having taken place in the late 20th and the early 21st centuries. Vermont was the first state to legally recognise same-sex unions when it established civil unions for same-sex couples in 2000. Same-sex marriage was legalised in 2009. It also enacted hate crime legislation in 1990, one of the first states to do so, that included sexual orientation.

Seen as one of the most liberal states in the US regarding LGBTQ+ rights, California has received nationwide recognition since the 1970s.

Same-sex sexual activity has been legal in California since 1976. Discrimination protections regarding sexual orientation and gender identity or expression were adopted statewide in 2003. Transgender people are also permitted to change their legal gender on official documents without any medical interventions, and mental health providers are prohibited from engaging in conversion therapy on minors.

Public schools are also required to teach about the history of the LGBTQ+ community and transgender students are allowed to choose the appropriate restroom or sports team that match their gender identity.

Connecticut was the second US state to enact two significant pieces of pro-LGBTQ+ legislation; the repeal of the sodomy law in 1971 and the legalisation of same-sex marriage in 2008.

State law bans unfair discrimination based on sexual orientation and gender identity in employment, housing and public accommodations. Both conversion therapy and the gay panic defence are outlawed in the state.

Same-sex sexual activity has been legal since 1962 after Illinois became the first U.S. state to repeal its sodomy laws.

Same-sex marriage was banned by statute in 1996, but has since been legalised after a law allowing such marriages was signed in 2013 and went into effect on June 1, 2014.

The LGBTQ+ community in Chicago is vibrant. The first pride parade took place in 1970, a year after the Stonewall riots. Since 2013, the Chicago Pride Parade has attracted around one million attendees each year.

Iowa has seen LGBTQ+ rights evolve significantly in the 21st century. The state began issuing marriage licenses to same-sex couples on April 27, 2009, following a ruling by the Iowa Supreme Court, making Iowa the fourth US state to legalise same-sex marriage.

Same-sex couples may also adopt and state laws ban discrimination based on sexual orientation or gender identity in employment, housing and public accommodations.

Making the most of your pension plan if you move abroad

Many people dream of moving abroad when they retire but it’s a big step with lots of different factors to consider, including making sure your finances are in the best pension plan possible.

If you don’t already pay into a private pension, the sooner you start making contributions the better it will be for your financial future, especially if you plan to move abroad. But it’s worth remembering that once the money is in your pension plan you won’t be able to touch it until you are 55, meaning you’ll need to think carefully about your budget to cover all your essential living expenses.

If you do want access to cash after you turn 55 you could consider a drawdown pension which is an option offered by pension companies. It lets you turn your pension fund into an income when you reach 55. This gives you money to live on during your retirement.

Bear in mind that a drawdown pension is complex and isn't suitable for everyone. Your income will be affected by the value and performance of underlying assets. So make sure you understand the risks and costs before you go ahead.

Taking a seed list of countries from the 2020 Natixis Global Retirement Index, we analysed the following 10 data points:

Based on how long those laws have been in place, we assigned a score to each country*.

For example, same sex marriage in the Netherlands was first permitted in 2001, giving the country a score of 20 eg: 2001-2021=20, indicating a more progressive attitude for members of the LGBTQ+ community.

Where the right or protection wasn’t in place a score of 0 was assigned.

As such, the countries scoring the most points based on this scoring methodology were deemed better suited to LGBTQ+ retirees.

Taking a seed list of US states, we examined the following data points from Wikipedia:

Based on how long those laws have been in place in each state, we assigned a score. For example, same-sex marriage in Vermont was first permitted in 1977, giving the state a score of 44 eg: 1977-2021=44, indicating a more progressive attitude for members of the LGBTQ+ community.

Where the right or protection is not in place, a score of 0 was assigned.

As such, the countries scoring the most points based on this scoring methodology were deemed better suited to LGBTQ+ retirees.

*The score for anti-discrimination laws is an average of the years when the following was put in place:

As such, the states scoring the most points based on this scoring methodology were deemed better suited to LGBTQ+ retirees.