And the winner is...

The investments experts at money.co.uk have analysed the outfits worn by previous best actress winners to reveal which dress designs have been a good investment and which have lost money in the years since they graced the winners stage at the Oscars.
Share this guide 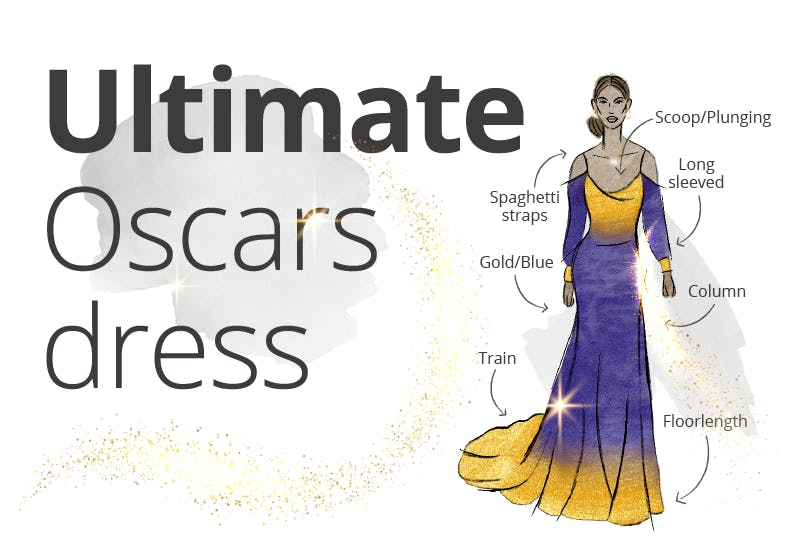 With global restrictions put in place because of the pandemic, the majority of 2020’s awards ceremonies have been held virtually. However, for the 93rd Academy Awards, the A-List elite took to the red carpet in the finery for a socially distanced ceremony.

With thousands of dollars invested into perfecting a winning look, the investment team at money.co.uk analysed 25 worn by the Best Actress winners to discover which have been investing hits and which have lost money in the years following their winning moment.

We worked with Louisa Rogers, a fashion expert, lecturer and owner of Studio Courtenay to determine how much each dress was worth when originally worn on the red carpet, as well as the estimated value of each piece in the current climate.

Louisa, who has spent the last five years specialising in designer vintage resale and regularly analyses fashion ‘investment pieces’, estimated that of the twenty-five dresses, fourteen had likely increased in value, whilst eleven may have depreciated in worth.

If you’re looking for ways to invest your money, check out our investment accounts.

Regarding the process behind the dress valuations, Louisa explains how she analyses each dress for its current market value:

“Simple couture dresses start at around $10,000, but can go up to $500,000 depending on the level of intricacy, embellishment and hours put into creating each garment by highly skilled atelier artisans.

“Some designers worn by previous winners have suffered from negative publicity during recent years. Dolce and Gabbana have been accused of racism on multiple occasions, whilst American brand Marchesa has close links to Harvey Weinstein due to the brand being co-founded by his ex-wife Georgina Chapman. These kinds of scandals understandably have an effect on the resale value of pieces. Some designers - like Richard Tyler and Randolph Duke - have struggled to maintain relevance within the fashion world, which harms their desirability for collectors. Some brands remain well known but haven't managed to maintain the same 'buzz' around their names in more recent times, i.e. Lanvin, Rodarte, and Guy Laroche.

“Classic designer names like Armani Prive, Valentino and Givenchy will maintain their value - particularly in more timeless designs - but will not appreciate in the same way that iconic looks (such as Charlize Theron in Gold Gucci) or brands that have cultivated a lot of hype around them might when it comes to appealing to collectors of couture.

“Legacy french houses, such as Yves Saint Laurent, Christian Dior and Gucci will always have a core following, whilst Tom Ford for Gucci has seen a sharp increase in value over the past five years as the 20-year trend cycle looks to the 90s/00s for modern style inspiration.

“Reese Witherspoon's Dior gown worn at the 1996 ceremony was a vintage couture piece from the 1950s, and similar dresses sold at auction have seen a considerable increase in value, tripling or even quadrupling in price. One should absolutely consider vintage couture dresses as a finite resource that will continue to appreciate in value.

“The predicted current value of certain high-value dresses (e.g. $4 million for Jennifer Lawrence’s Dior gown worn in 2013) are impacted by a tiny resale market. There are approximately just 2,000 collectors or buyers of haute couture across the globe, meaning they can never achieve a true cost-value on the resale market and are likely to be sold off to museums or for charitable purposes instead.

“When it comes to a ceremony as prestigious and globally viewed as the Academy Awards, designers will often use their gowns as opportunities to generate press coverage or as living advertisements, so the cost of making is rarely proportional to the resale value.”

Salman Haqqi, money.co.uk’s personal finance expert, highlights how those looking to taking inspiration from the upcoming Oscars and feeling inspired to invest in fashion should start small with their amounts and take the learning process extremely seriously:

“In recent years, there has been an elevated demand for luxury clothing and items that are predicted to soar in value. Some iconic brands and haute couture pieces have been known to resell for significantly more than their original sale price, meaning there is potentially money to be made.

“However, having a keen eye for style and being up to date with next seasons latest trends doesn’t necessarily mean that attempts to profit from high-end pieces will be an automatic or instant success. As with all investments, there is an element of risk and it’s important to remember that you may get back less than you originally invested.”

Our expert also analysed each and every dress worn by actresses that have either won or been nominated in the ‘Best Actress’ category between 1996-2020 to determine the ultimate Oscars dress.

To help visualise not only the ultimate winners dress, but also a ‘snubbed’ nominees dress, the team studied the following criteria for each red carpet look:

In order to assess if there was any correlation between the outfits worn by Best Actress nominees and the monetary budgets or reviews related to their performances, the team also noted:

The illustration below incorporates each of the most popular elements of the dresses worn by Best Actress Oscar winners during the past twenty five years: 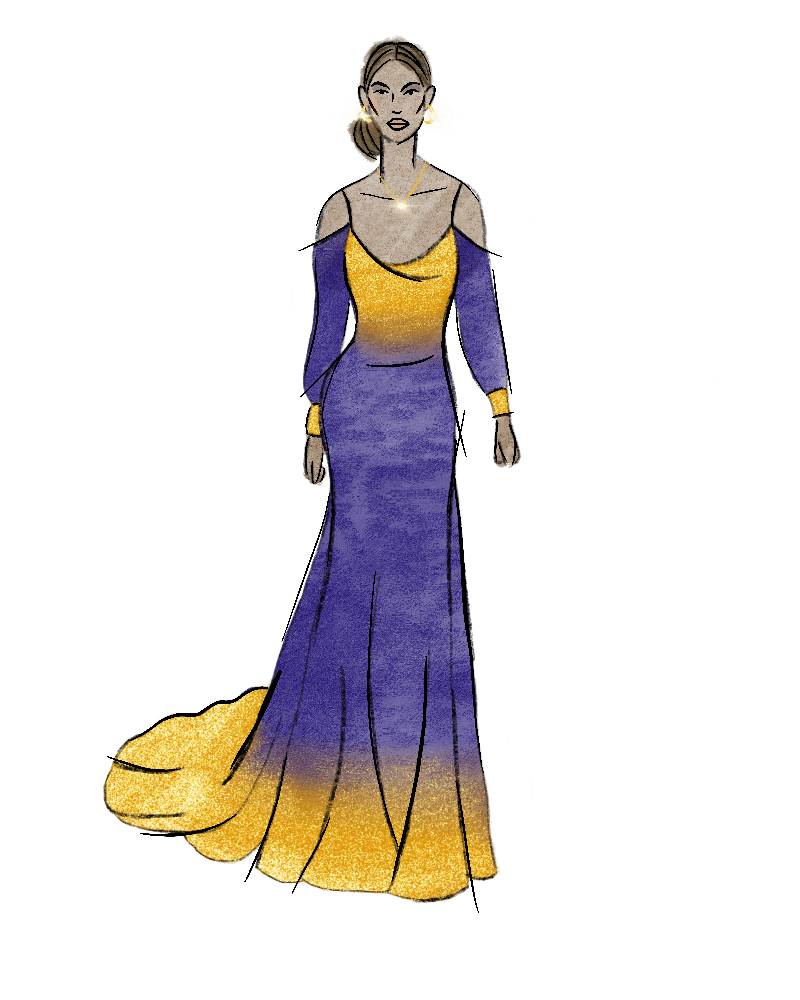 The winning dress is to be designed by Gucci, which has dressed more winners than any other brand since 1996. Brie Larson, Charlize Theron and Helen Hunt all trusted the iconic Italian fashion house with the most important outfit of their award season.

The column silhouette proved the most popular style amongst winners, featuring in nine dresses; whilst floor length proved the preferential length, with 20 red carpet appearances.

The winning dress design encompasses the 17 nominated actresses who wore dresses with two shoulders, as well as the 16 that opted for opulent glamour with dresses featuring a train.

The two most popular sleeve and strap styles - spaghetti and long-sleeved - appear on the illustration, whilst the two most common necklines - plunging and scoop - are also featured.

When it comes to the colour of the winning dress, both blue and gold were tied as the most recurring colour dress worn by winners, five times each since 1996. Winning actresses that chose to pay tribute to the iconic gold statue the year they won include Emma Stone in 2017, Meryl Streep in 2012, Hilary Swank in 2000, and Susan Sarandon in 1996. 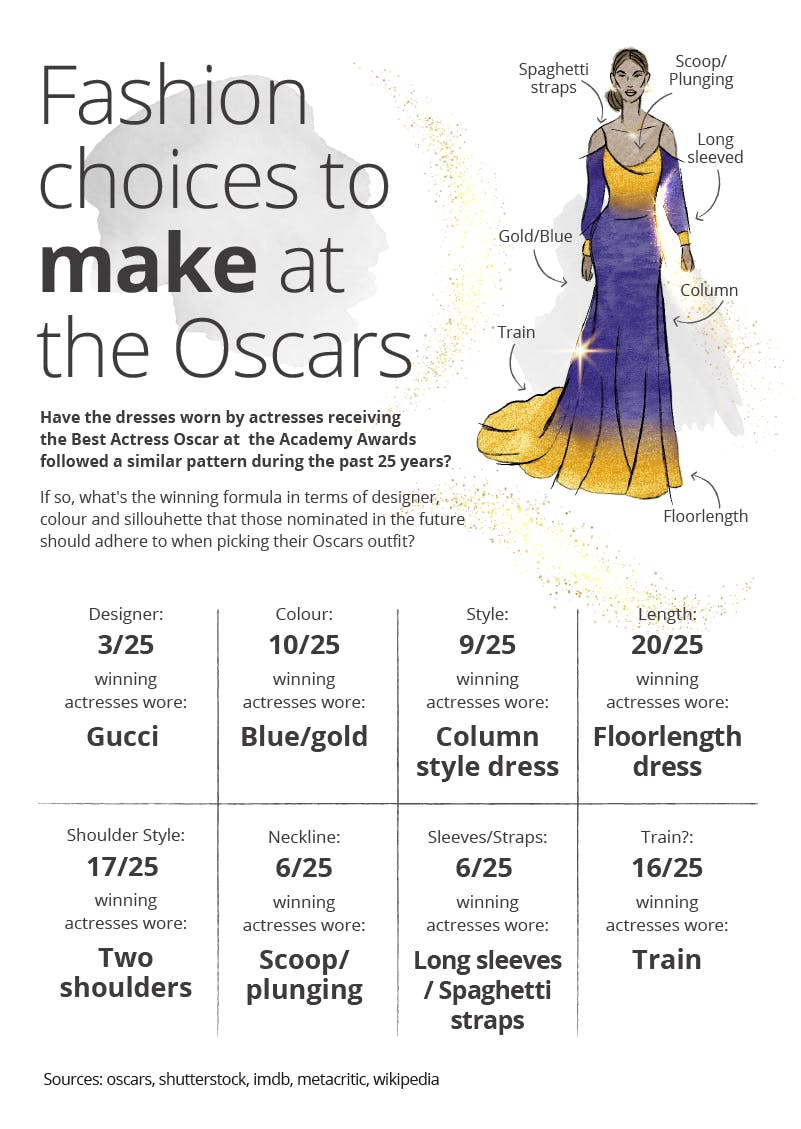 The illustration below showcases a design that takes into consideration the most common features of dresses worn by the actresses that failed to win the Best Actress Oscar the year they were nominated: 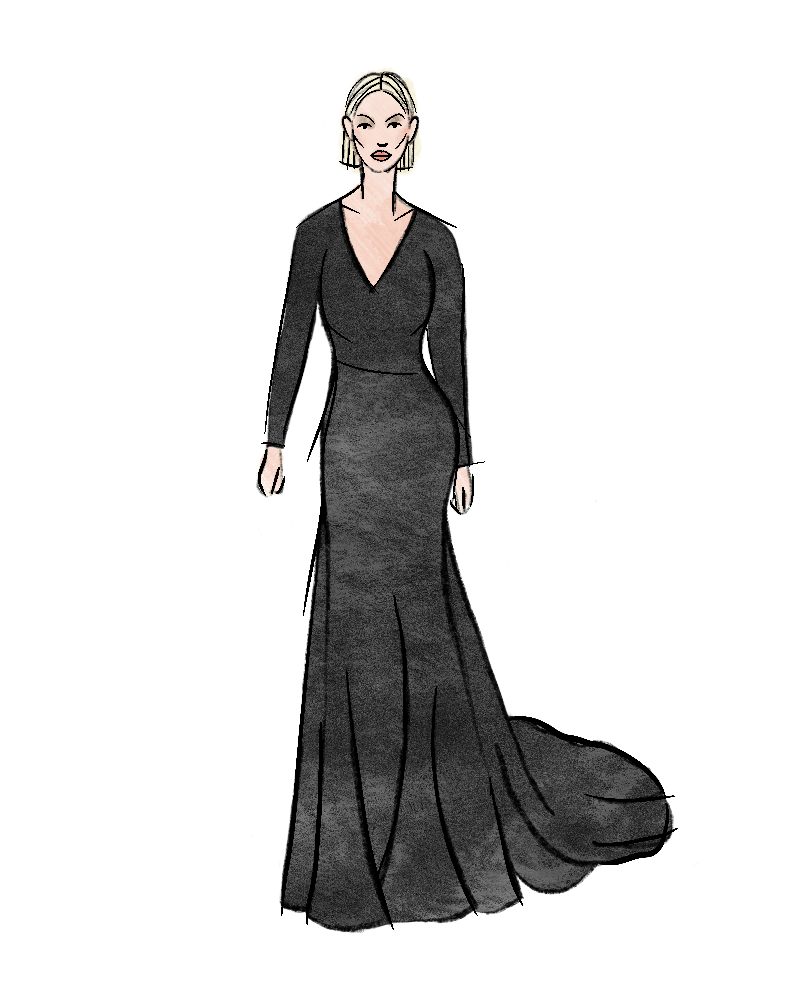 Of the 94 actresses that failed to win the Best Actress Oscar between 1996 and 2020, 10 - including Cate Blanchett, Jessica Chastain, Naomi Watts and Anne Hathaway - decided to grace the red carpet in Armani. Following closely behind were designs by Christian Dior and Valentino, who each dressed six of the snubbed actresses analysed.

Echoing the winner's dress, floor-length, long-sleeved dresses with trains once again proved the most repeated trends on the red carpet. Worn a total of 41 times, the column dress reigned supreme amongst the snubbed nominees. The empire-line style came in second with 19 wears, whilst mermaid style bagged third place, after being chosen by 12 actresses, including Reese Witherspoon, Sandra Bullock and Viola Davis.

Somewhat tellingly, the ominous colour of black was witnessed the most frequently for the losers' dress, having been worn 21 times. White and silver followed closely behind, chosen 15 and 13 times respectively. A V-neckline was the most likely to shape the decolletage of the snubbed nominees, appearing in 16 dresses in the past 25 years, and on such A-listers as Dame Judi Dench, Meryl Streep, Rooney Mara and Annette Bening. 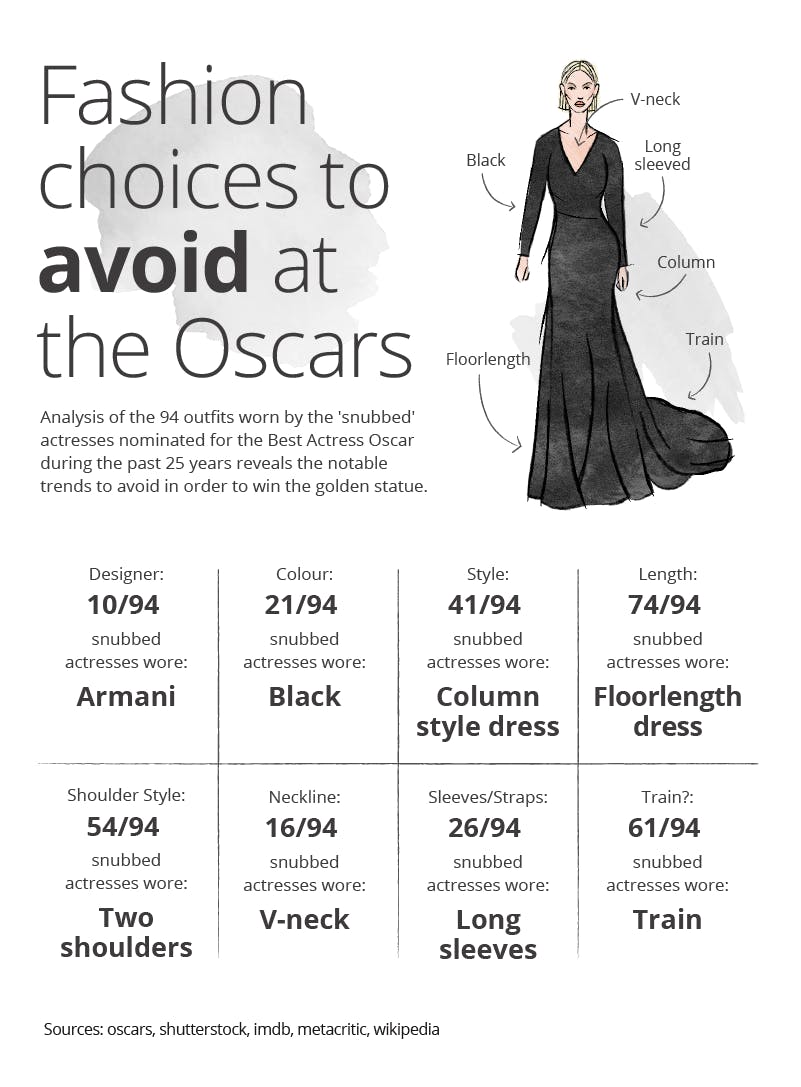