The most liked Instagram posts redesigned as world-famous paintings

The art world has seen a huge transformation in recent years thanks to the technological advances in digital media. Nowadays, platforms like Instagram, YouTube and TikTok are being used as creative outlets around the world and are causing the art industry as we know it to be redefined.
Share this guide

Iconic internet moments such as memes and social media posts are now being sold as non-fungible tokens (NFTs) at auction for millions, potentially becoming valuable investments for many digital collectors. As art investments evolve, we wanted to create a fusion of classic and digital art by combining the old with the new.

Find out more about the different ways you can invest your money and compare investment accounts.

We’ve looked at some of the most liked Instagram posts along with some of the most expensive paintings in the world to create the ultimate pieces of art. By fusing the two visuals together, the redesigns embrace both art in its most traditional and digital form to give a glimpse into what these iconic pieces could look like if they were to be created today. 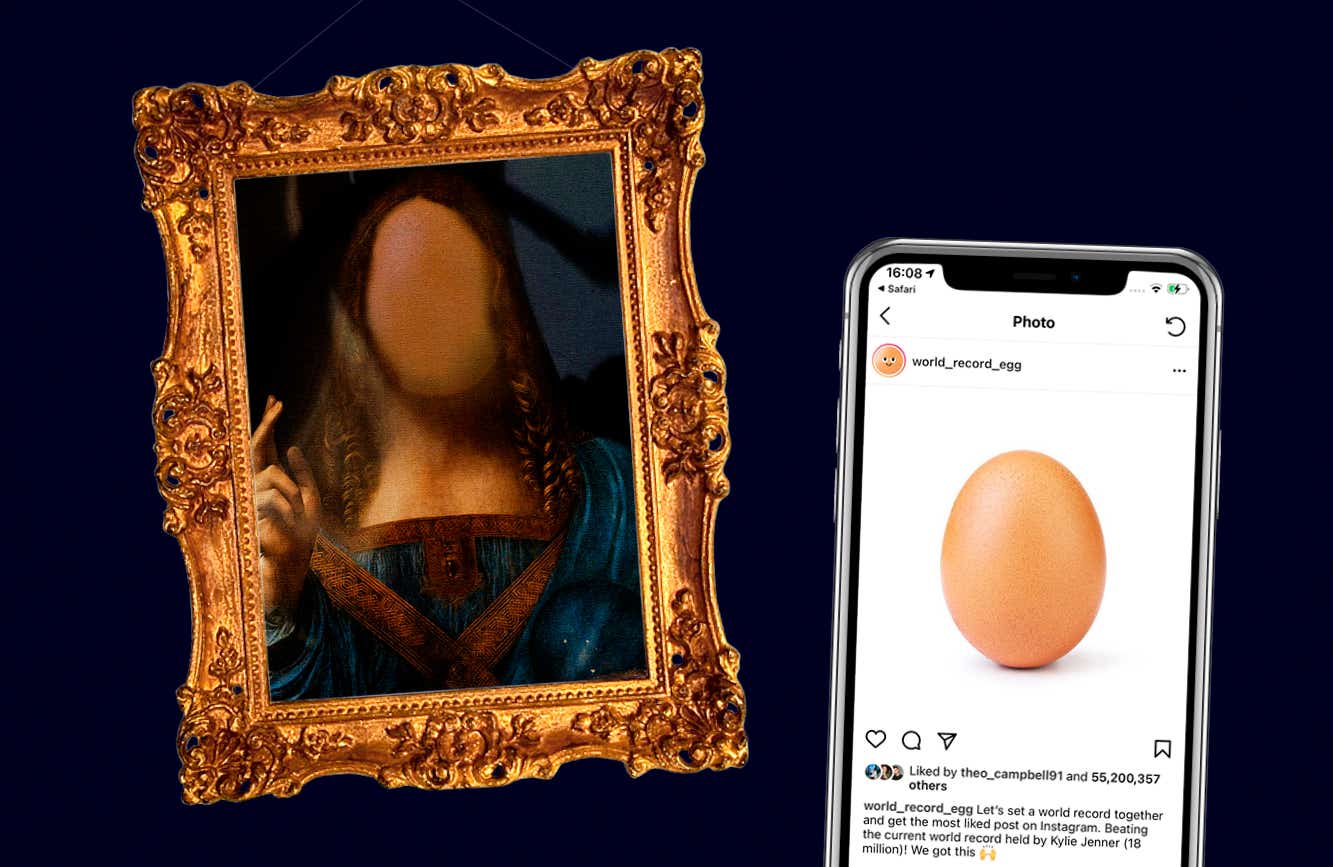 Likewise, Leonardo da Vinci’s painting, Salvator Mundi, made headlines in 2017 when it sold for a record-breaking $450.3 million at auction. The painting, depicting Christ, was once believed to have been destroyed making it even more valuable when it resurfaced in the 1900s. Therefore, the fusion of these two record-breaking pieces would make for one of the most valuable and visible pieces of art in the world today.

We’ve calculated that despite being the most liked Instagram post in the world, the post was somewhat of a ‘one-hit wonder’ and never recreated the same feat with his Instagram account. Looking at influencer marketing statistics, this means this ‘Instagram art’ may only fetch up to $17,053 based upon follower count, likes and engagement. That’s a long way to go before you can start competing with the Renaissance master. 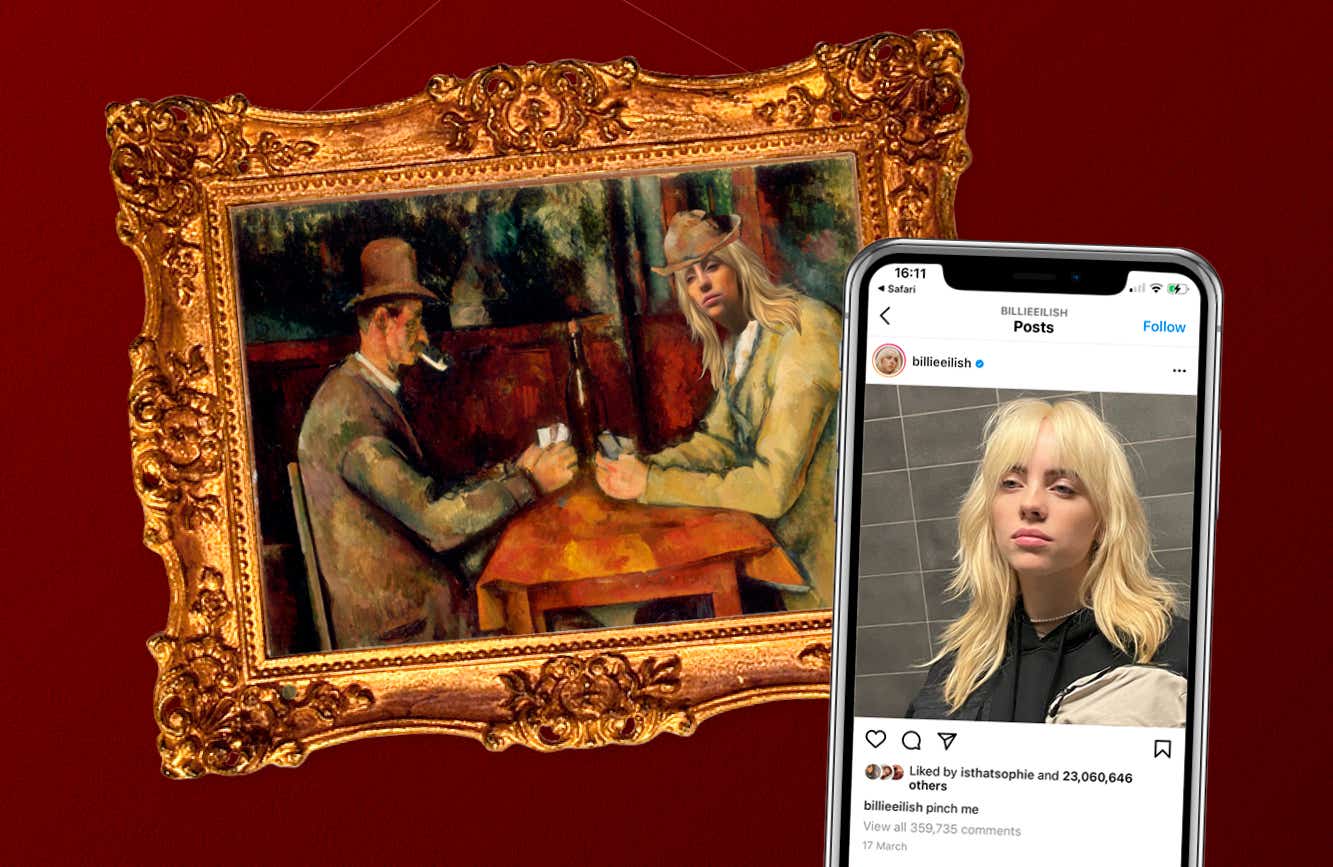 During March of 2021, Billie Eilish took to social media to reveal her blonde hair in a surprise Instagram photo. The post exploded on social media and racked up 21.9 million likes, making it the fourth most liked Instagram post in the world!

We merged this iconic post by Eilish with the third most expensive painting in the world, Paul Cézanne’s The Card Players, to create a new masterpiece. The exact sale price of the painting is unknown but it is estimated to have sold for between $250-$300 million. As a result, we’ve calculated that Billie Eilish’s post could generate up to $289,000 based on her follower count and engagement levels, a fraction of the sale cost of Cézanne’s masterpiece! 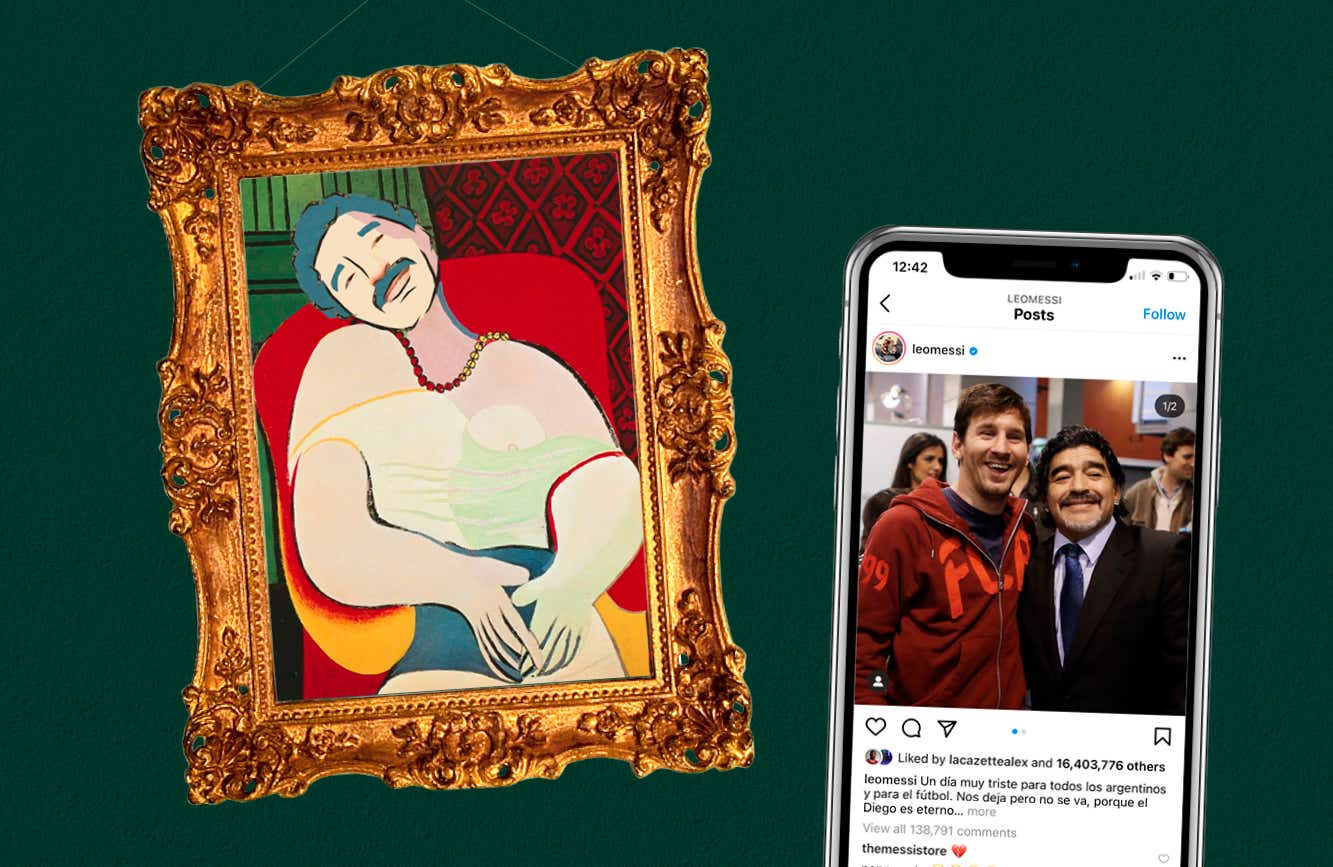 After the passing of Diego Maradona in November 2020, soccer star Lionel Messi posted a photo of himself and the football manager in remembrance, which gained 19.8 million likes on Instagram. This photo is now the sixth most liked Instagram post in the world and has been seen by millions of people.

We reworked this social media tribute with the iconic work of Pablo Picasso's Le Rêve to create a visual masterpiece. The original painting, stated to be a dedication to Picasso’s lover, Marie-Therese Walter, sold for £124 million ($155 million) in 2013 landing it on the list of some of the most expensive paintings worldwide. Comparing this to Messi’s potential earnings from his Instagram already, this post could have generated up to $768,000 from his engagement and follower counts, but if paired with Picasso’s painting talent, who knows how much more this merged masterpiece could sell for. 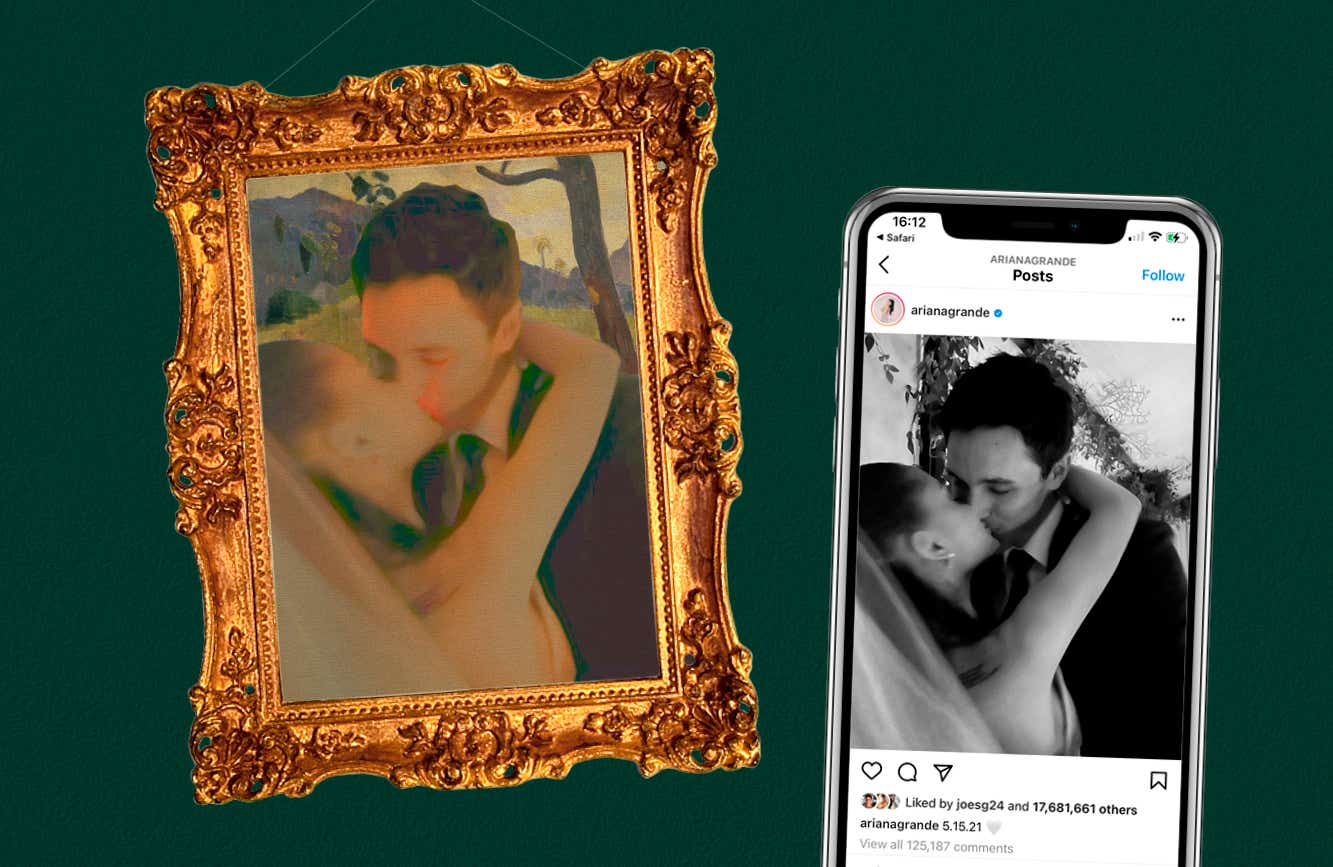 Pop superstar Ariana Grande is the current owner of the second most liked Instagram post in the world, generating 26.6 million likes earlier this year as she announced her marriage to Dalton Gomez through the social media platform. On May 26 2021, Grande took to instagram to reveal her marriage to real estate agent, Dalton Gomez. Grande’s nuptials post was reimagined with the fourth most expensive painting to ever sell, Paul Gauguin's Nafea Faa Ipoipo which translates to ‘When Will You Marry?’ and sold for $210 million (£155 million) in 2014. On average, Ariana Grande's posts generate around 5 million likes per image, meaning if she were to create sponsored content her Instagram images could fetch up to $833,000 a piece.

As art increasingly takes on a digital form, what people consider art and how it is valued is likely to change.  Whether they be physical paintings or digital posts, it’s clear art will continue to be a worthy investment for collectors worldwide.

Money.co.uk looked at the most recent sales value of some of the world’s most expensive paintings, collating them with the most-liked Instagram posts to reimagine as digital art.

Sources and reports of sales values:

The potential earnings from the Instagram posts were calculated using Influencer Marketing Hub which estimates the potential return for influencers and individuals with large social media followings on their content, based on follower engagement, follower number and average number of likes.