As part of one of the most lucrative industries that exist, sports stars across the world are some of the highest-paid people on the planet. We often watch male football and basketball players sign contracts worth thousands, if not millions, to play for major league teams, but it’s no secret that this isn’t always the case for women.
Share this guide

It seems the sports industry is no exception when it comes to having a gender pay gap, but as women’s sports continue to grow from strength to strength, we were curious as to which sports are investing the most - and the least - in their female teams.

Whatever your investment needs, you can compare investment accounts to find the right online platforms to help grow your portfolio.

Money.co.uk conducted a study into a variety of sports across the UK and the USA, and calculated the difference in pay between each gender, to see which sports are making the biggest investments in their male and female players. By collecting data from both genders as well as their average wage in each sport, we were able to find out in which sport the gender pay gap is the worst, and the disparity between male and female sporting investments.

Basketball has the largest gender pay gap at  $10 million

One of the highest gaps we found in our study was in American basketball, where male athletes are earning a scary 8,567.4% more than their female counterparts. In terms of actual pay, this equates to about a whopping $10 million. The average salary of a female basketball player is around $118,000, but for a male? Well, they could be earning up to $10,225,000.

In 2017, a player in the Women's National Basketball Association (WNBA) earned an average salary of $71,635, but for the male equivalent NBA players, their minimum was at $838,464. To put this into perspective, the highest-earning WNBA player earned only a fifth (20%) of the lowest-paid mens NBA player, and this doesn’t factor in any brand deals or endorsements the players will benefit from outside of the game.

In the NBA leagues, men and women are paid based on league revenue, so these discrepancies in wages may come down to the fact that the men’s league attracts a higher viewership, which in turn drives bigger brand endorsements and TV deals - but ultimately, this means  that the female teams get less investment. 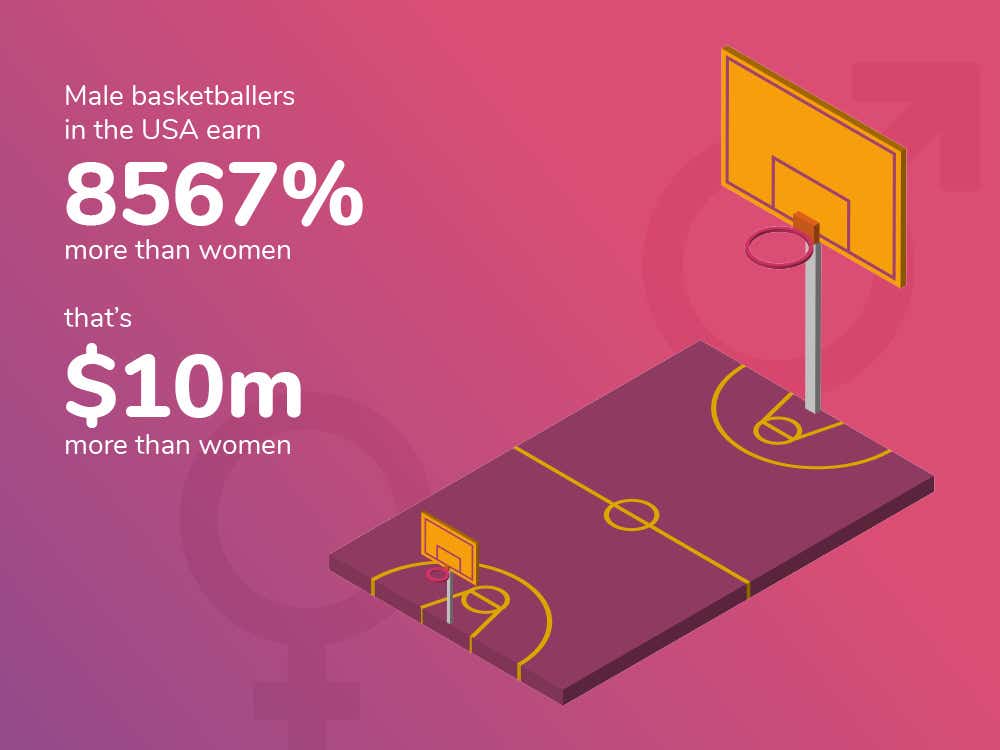 If you thought that the basketball pay gap was shocking, hockey is not far behind. In the USA, our study found that men earn on average 4445.05% more than women, which equates to about $1.7 million extra a year. A male player for the Boston Bruins, for example, could be making a healthy salary at as much as $50 million, whereas the female’s salary cap generally sits around the $600,000 mark.

There’s no wonder then that female hockey players in Canada and the States refused to play as a protest against their poor wages. According to a story by CBC, Olympic gold medalist and America’s highest-paid female hockey player, Amanda Kessel, was protesting over the poor pay for female players, as she only takes home $10,700 playing for the Metropolitan Riveters. In the male league, however, we found that teams were investing in salaries over 4000% higher, and male players could be taking home around $1.8 million.

Female football players could be losing out on £1.9 million

On both sides of the pond, funding and salaries were lower for female footballers than their male counterparts. In the USA, our study found that men were taking home 86.7% higher pay on average, but in the UK, it was a striking 7307.4%. To put this into monetary terms, male soccer players in the states are making $34,000 more than women, while for UK players, it was an enormous £1.9 million.

There’s no doubt that having one of the most prestigious football leagues in the world means UK players are seeing healthy paychecks each month, but why is there so much disparity between men and women? Lionel Messi, for example, earned 130 times as much as the highest-paid female footballer, but this isn’t limited to individual cases. This trend can be seen across the top 10 leagues from both genders within the UK. More recently, Jack Grealish made history as one the most expensive players in English football, after Manchester City invested in a £100m deal to secure him, breaking the UK transfer record in terms of worth. In comparison, Pernille Harder was the most expensive investment for any female football team,with Chelsea paying £250,000 to Wolfsburg in order for her to move clubs. The difference in figures shows the staggering disparity between the investment into the male and female games.

Based on the average wage of the league, males in the Premier League would earn £772 a minute if they were to play every minute of a regular season. On the other hand, the same calculation for women found they would only make £16.72 a minute in the FA Women’s Super League. 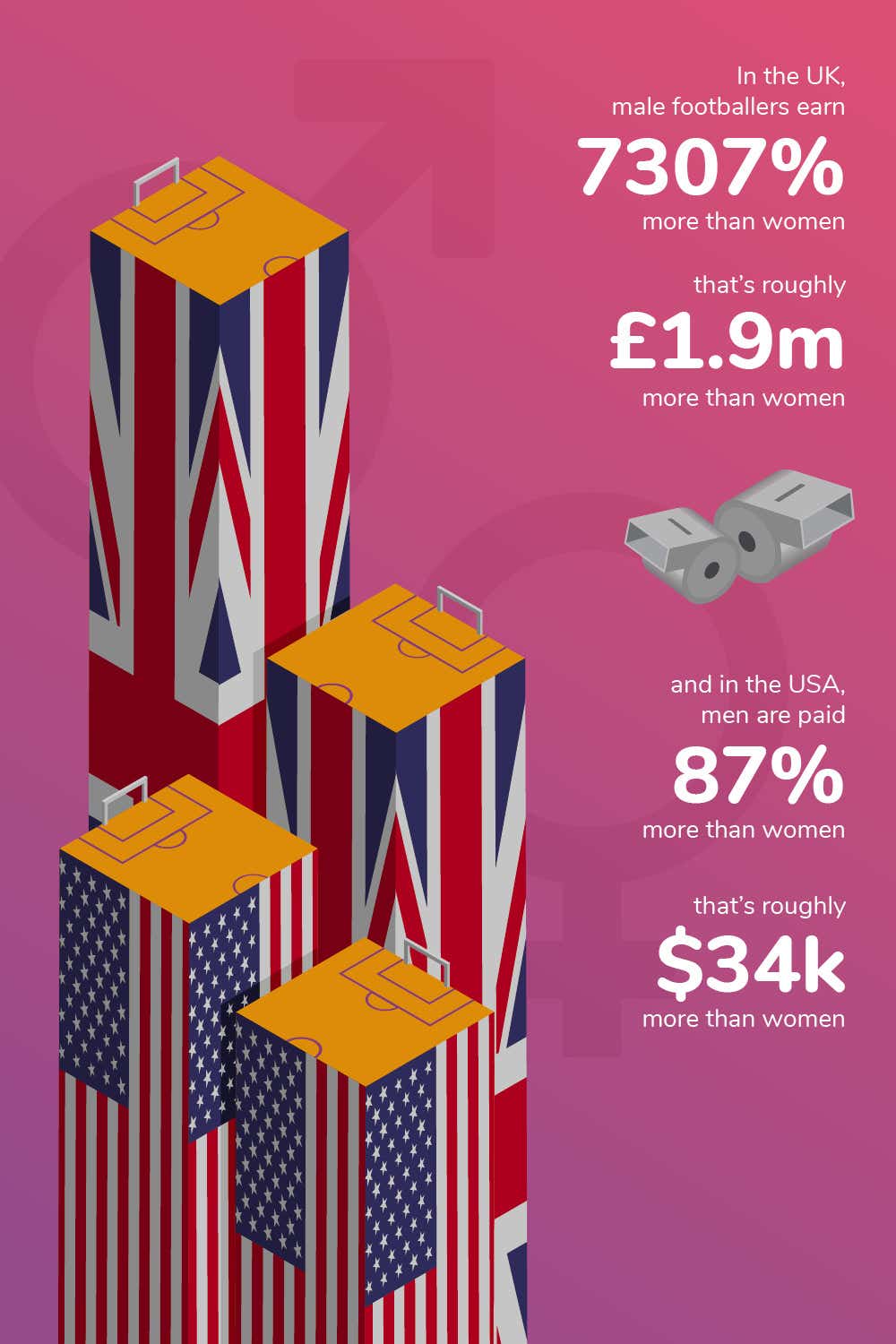 Tennis has the smallest pay gap between men and women at 34.3%

The sports in our study with the smallest pay gaps were tennis, cricket, and golf.

We found cricket to have a pay difference of 1,700%, which seems large, but is still fairly small relative to the gaps in player investment than other sports. Women in cricket make an average of £50,000 a year in the UK, but men could make as much as £900,000. 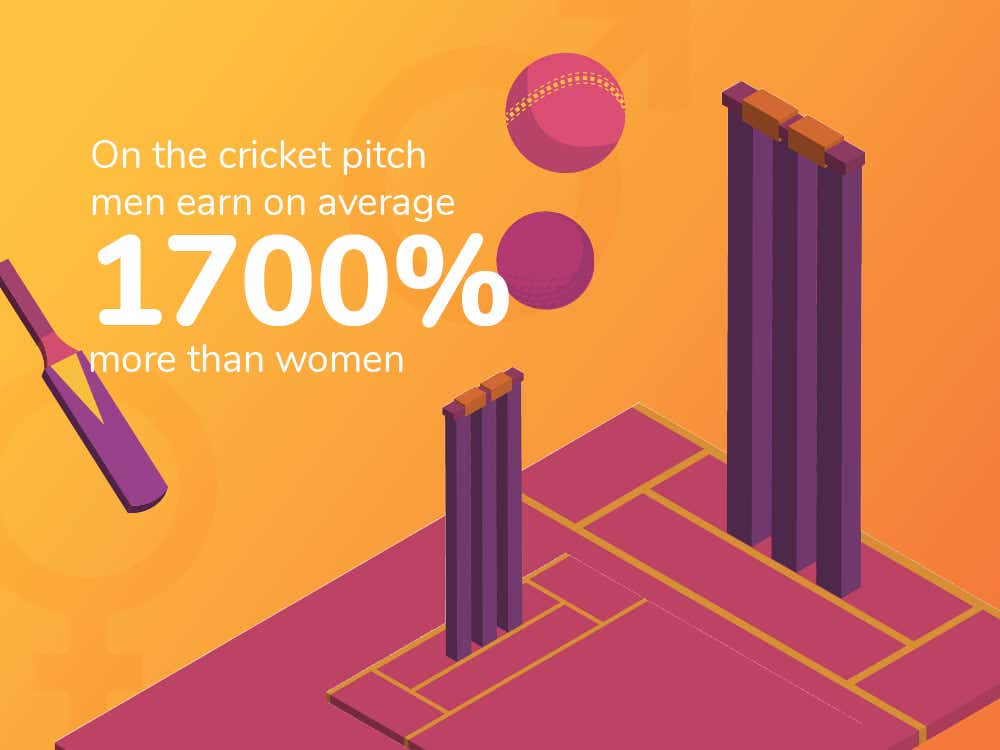 Golf, one of the most lucrative sports on the planet, still lacks equality of prize money even up to elite level. Even though USA Golf has a much smaller gap of 325.9%, men are still typically taking home $44,400,000 more each year compared to women. With bigger sponsorship deals and funding, the money invested into the men’s game still outweighs that of the female leagues. 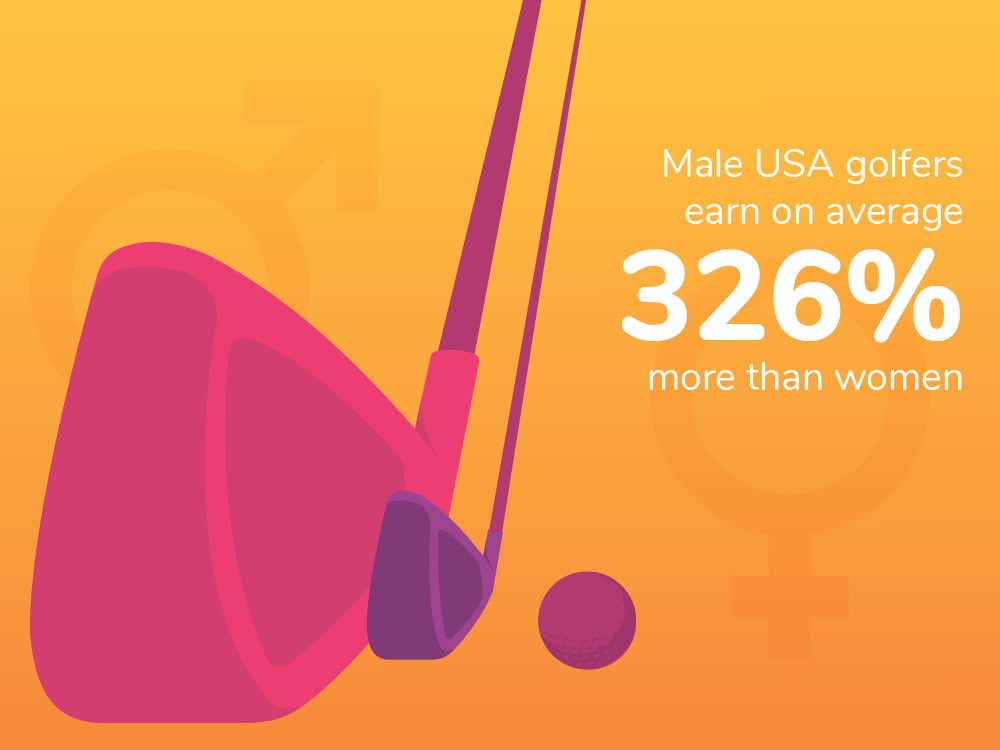 Women wanting to take up tennis, though, will be happy to hear that the pay gap in this sport was the smallest out of our study. We found that women in tennis were making 34.3% less than men, with a males’ average salary estimated to be around $19 million, while women could be making around $14.2 million. 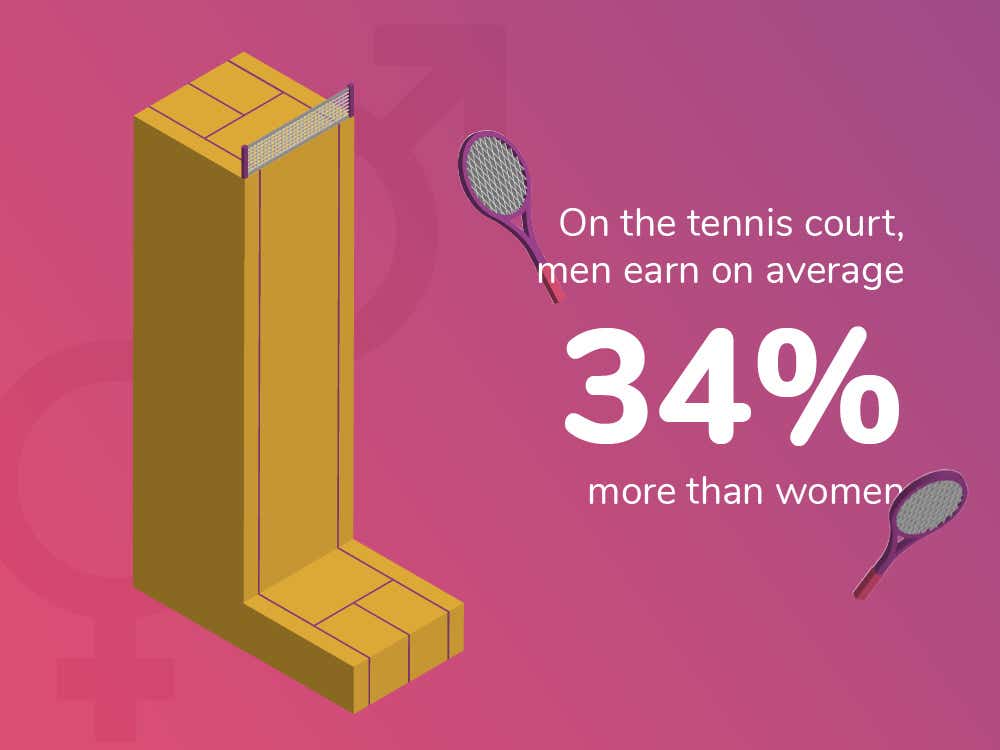 In 2019, Forbes published a list of the highest-paid athletes in which female tennis star Serena Williams was the only woman to make it into the top 100. While one in a hundred demonstrates the daming lack of investment into female sports stars, tennis is the only sport to feature in the list. 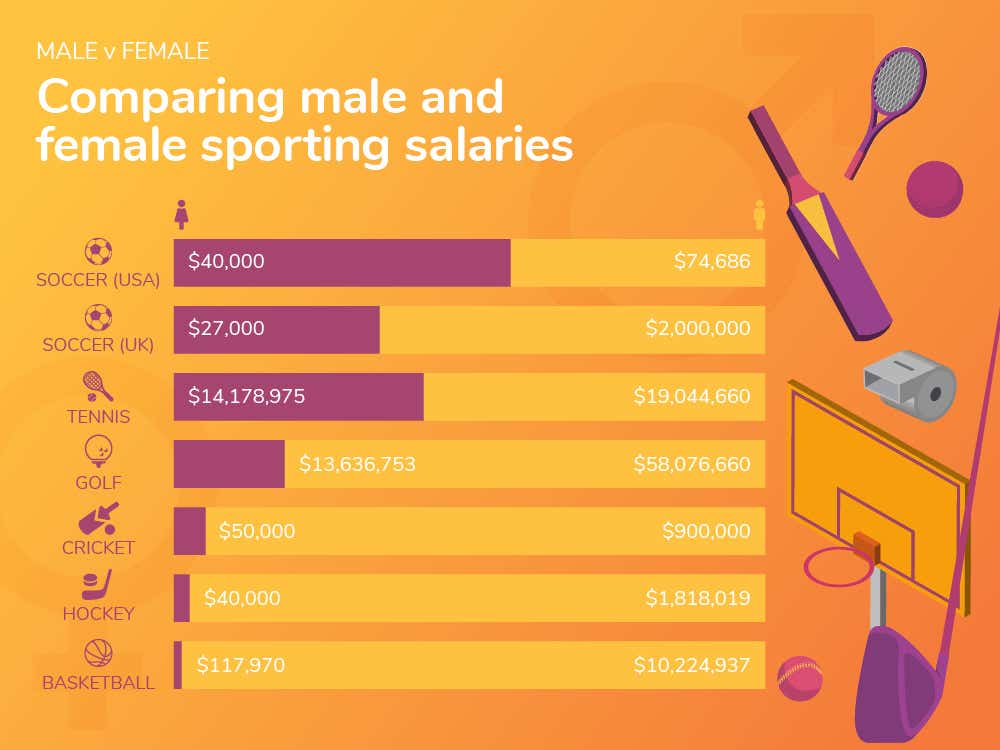 The sports that are investing more in the female game

Despite the large pay disparities among many of the sports, there remains a glimmer of hope for female athletes wanting to reap the same rewards as men for their talents. In certain sports, such as cricket and tennis, we are finally seeing some advancement in pay equality and investment between genders. Despite having a gender pay gap of 1,700%, cricket is making the biggest steps for narrowing the gap by offering equal prize money in major league competitions. For example, in the 2017-18 season of the Big Bash Leagues, men and women had an equal prize pot up for grabs, as they will in the 2021 inaugural season of the Hundreds.

Along with cricket, tennis is another sport that is paving the way for elevating its female athletes, also offering equal prize money to winners in all four of its major championships. The legendary Billie Jean King is the one to thank for this. It wasn't until her threat to boycott the U.S Open in 1973 over pay equality that they decided to even out the rewards for winners, with other competitions in the sport following suit.

According to an article by Culture Trip, UK hockey has a 52:48 ratio between male and female players, making it the most gender-balanced sport in the country, which is a far cry from the situation in the USA. The article continues to state that in the United Kingdom, women enjoy equal pay and profile to that of men in the sport, which it claims is mostly down to the fact that there’s no established male monolith to overcome.

The future for women in sport

Overall, it's clear that there’s still a long way to go before we’re able to see the gender gap close completely, especially when it comes to the likes of the sporting industry. Although that’s the case, we hope to see more sports investing into women's leagues in a step towards having equal pay between the genders. In certain sports, sponsorship, funding and investment is on the rise for the female game - including lucrative broadcast deals in UK football, and also at grassroots level. Following the Tokyo Olympics’ controversy of female athletes self-funding and crowdfunding, more attention has been brought towards the investment and inequality gap in sports across the world.

Data on salaries for men and women was collected from spotrac.com for US and UK sports teams. The % men earned more than women was then calculated for both the US and UK by looking at the % difference between the average salaries for both genders.

CBC report about US hockey players refusing to play