If you’re a fan of fashion, you’ll know that the brands and styles which dominate the runways can change from year to year. But what if we told you that some of the items sitting in your wardrobe could earn you a tidy profit?
Share this guide

We looked at 44 unique fashion brands, four product categories and 13 colours to reveal which designer must-haves could give you the biggest returns in years to come.

This content is for informational purposes only and should not be taken as individual advice.

Whatever your investment needs, you can compare invesment accounts to find the right online platforms to help grow your portfolio. 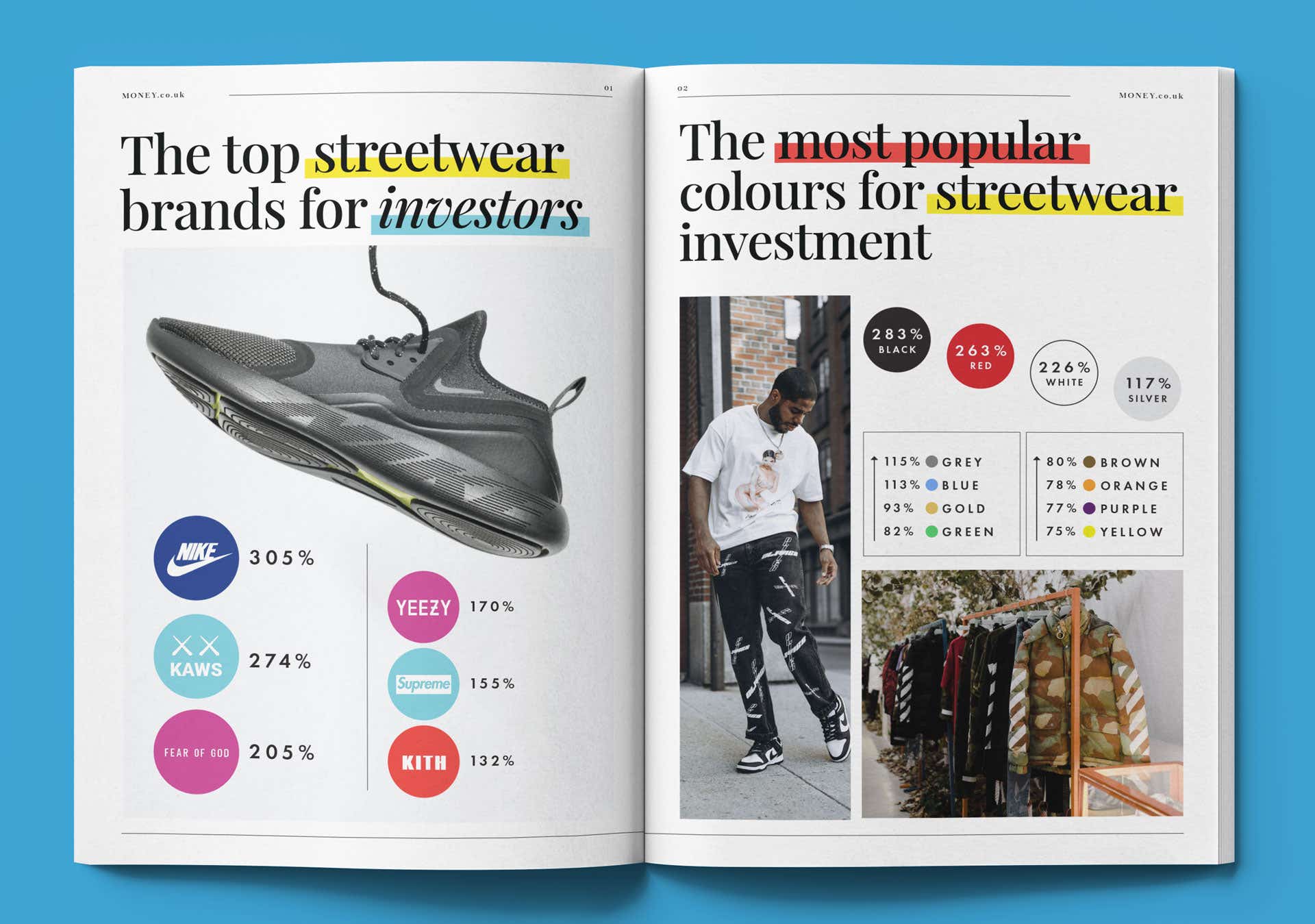 Nike has been one of the leading names in street style ever since it launched back in 1964, creating iconic ranges of activewear, sports clothing and, of course, sneakers. In fact, their Air Force 1s are the most successful trainer ever produced, selling an incredible 10 million pairs every year.

Our research found that Nike offers an average return of 305% on its products, making it the most profitable in the market.

In second place is Kaws. The artist, also known as Brian Donnelly, has made a huge splash on the fashion market with his unique take on pop culture, seeing his work sell for eight figures at auction, and even float along in sculpture form down Hong Kong’s Victoria Harbour.

It’s safe to say Kaws is having a moment, and it’s one that could see your money boom just as much as his popularity. Kaws products sell, on average, for 273.6% more than their original RRP.

Completing the urban top three is Fear of God. The brand only started in 2013, but after a 2016 collaboration with Canadian popstar, Justin Bieber, they saw a huge surge in popularity. Fashion fanatics could expect to see a 205.5% return on their money, benefiting from founder Jerry Lorenzo’s market-disrupting eye for fashion.

The top streetwear brands for investors

Black and white have been colour staples in the fashion industry since, well, fashion began, and they’re still leading the way now. Black items return an average of 283.2% on investments, while silver gives you 262.8% and white pays out 226.2%.

At the other end of the scale, purple only delivers a return of 70%, suggesting it might be a colour better off avoiding.

The most popular colours for streetwear investment

Buying Jordans could see you taking home a 376.2% return on your investment 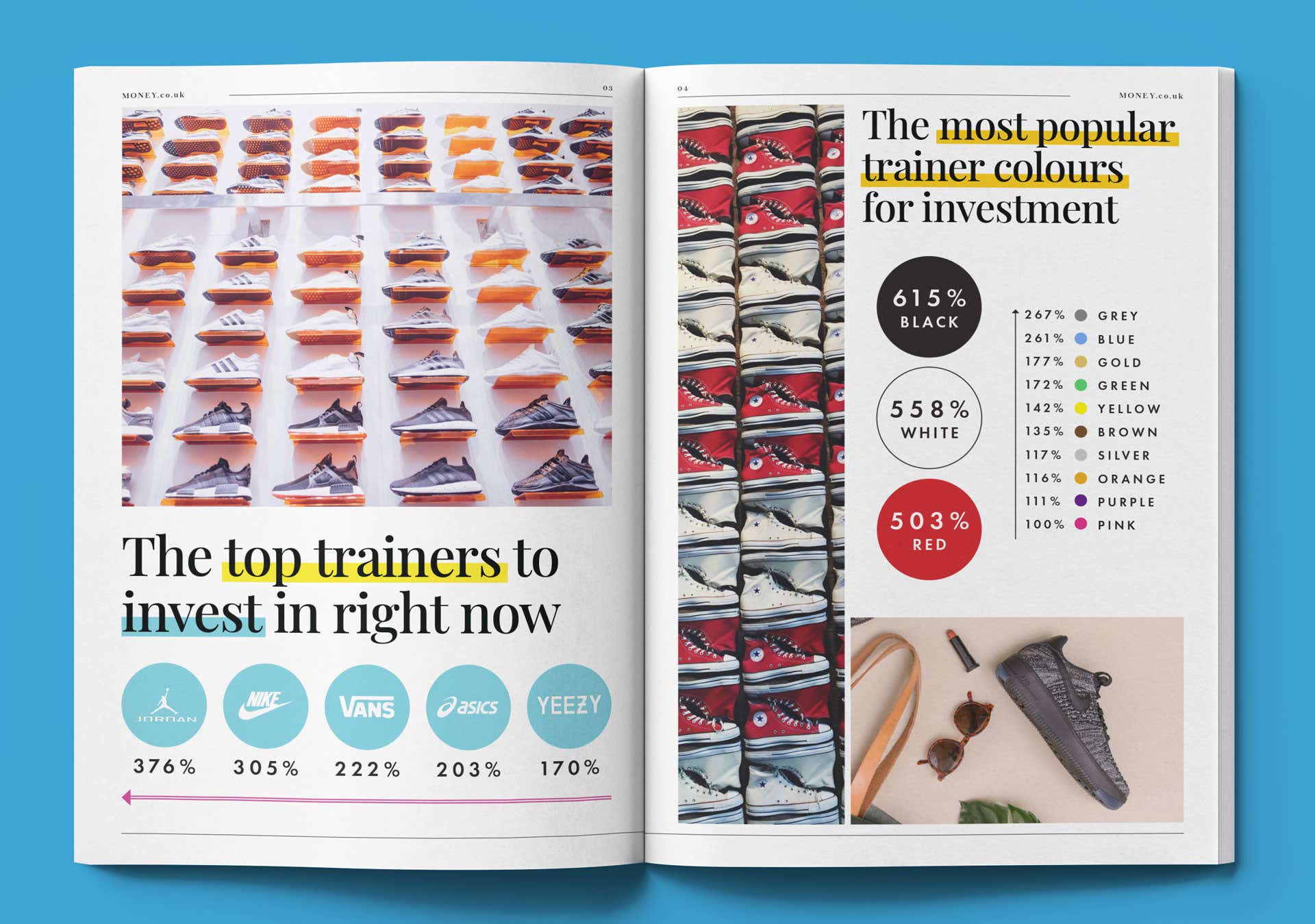 Trainers are one of the most sought-after - and expensive - items in the fashion market. Footwear fans clamour over the latest designs, doing all they can to be the first to step foot in the next style.

If you look down right now and see a pair of Jordans on your feet, your style could soon start paying off. The Nike sub-brand was originally designed for basketball legend Michael Jordan, and has since gone on to prove a slam dunk for people looking to score big profits. A pair could sell for 376.2% of the original price, so long as they’re unworn and in their original condition.

Nike is a brand that does well enough on its own merits. A pair of the brand's distinctive trainers could deliver 305.0% of the original cost, and with new lines being worked on all the time, you’ll have plenty of opportunities to buy yourself a piece of the action.

In third place is skate brand, Vans. So long as yours are free of personal customisations and skater scuffs, they could be worth 221.8% more than you paid for them.

The top trainers to invest in right now

Black, red and white are the best colours for sneaker success

The most popular colours for trainer investment

Brandon Blackwood handbags could double your money, plus a bit 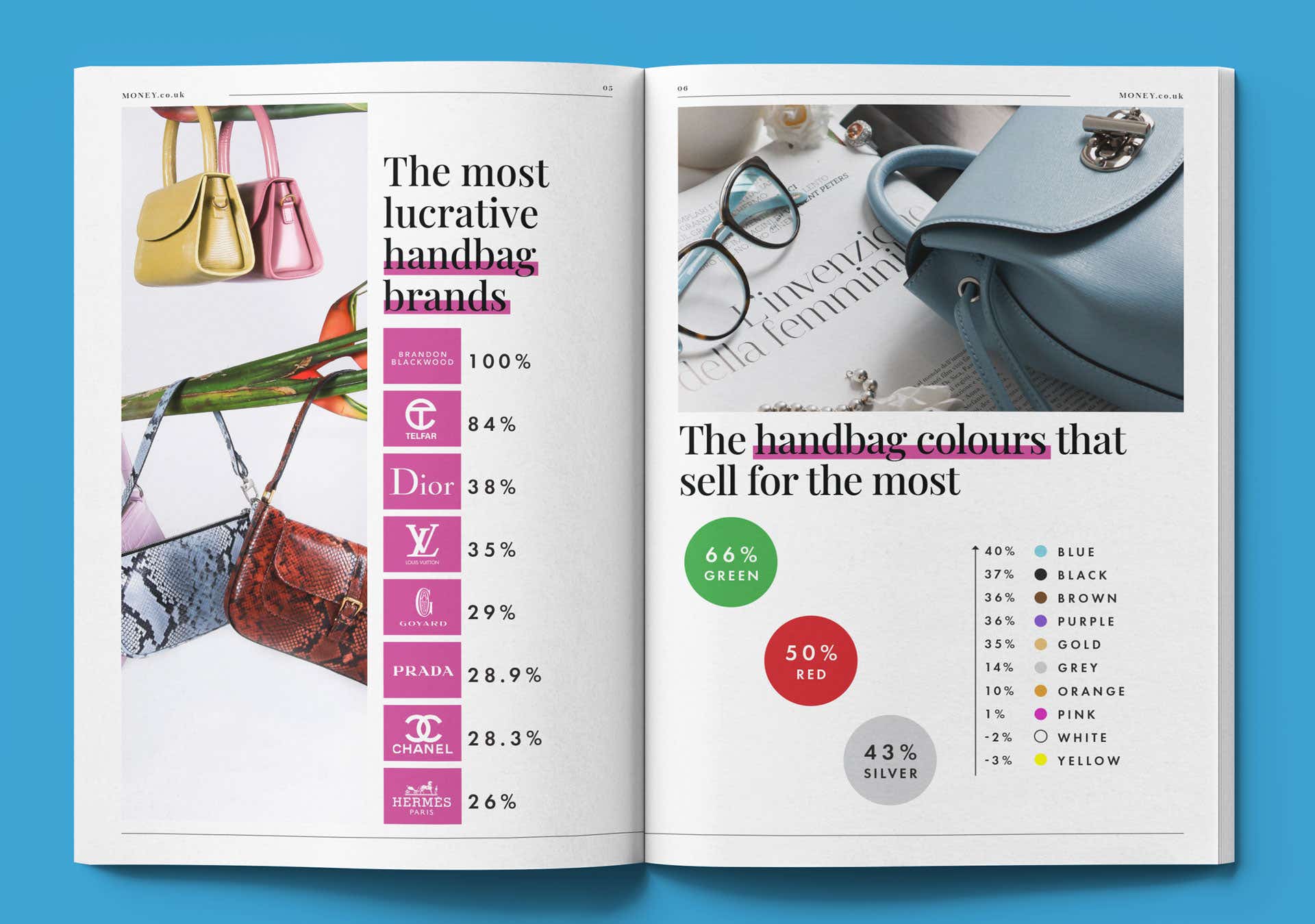 Brandon Blackwood handbags only launched in 2015, but they’ve already become one of the most desirable accessories available. The timeless designs have been worn by the links of Brie Larson, Zoe Kravitz and Kim Kardashian, likely enhancing the brand’s thriving image.

If you own a Brandon Blackwood bag of your own, you could expect to achieve a 100.4% premium - making twice the amount from your original investment!

Another handbag filled with profit is TELFAR, which could earn you a 87.6% return on investment. The genderless fashion brand was one of the biggest success stories of the COVID-19 pandemic, turning founder Telfar Clemens into a name everyone wanted to be associated with. Oprah chose his vegan leather tote bag as one of her favourite things, he was named GQ designer of the year, and PETA even recognised him for his animal welfare concerns.

Dior is the third most successful handbag brand. A name synonymous with style, their bags have been a wardrobe staple for over 74 years, and could give you a 38.1% profit on your purchase price.

The most lucrative handbag brands

Fashion green leads to financial green when it comes to handbags, with the colour potentially being more profitable than any other tone. Green handbags could make a real statement, and with an average profit of 65.7%, that statement will look good in your purse or wallet, too.

Red bags come in a close second with a potential return of 49.8%, while silver completes the top three with 42.9%.

On the other hand, yellow handbags could actually lose you money, selling on average for 3% less than their original price.

The handbag colours that sell for the most

Timex watches could make you 49.3% of their original price 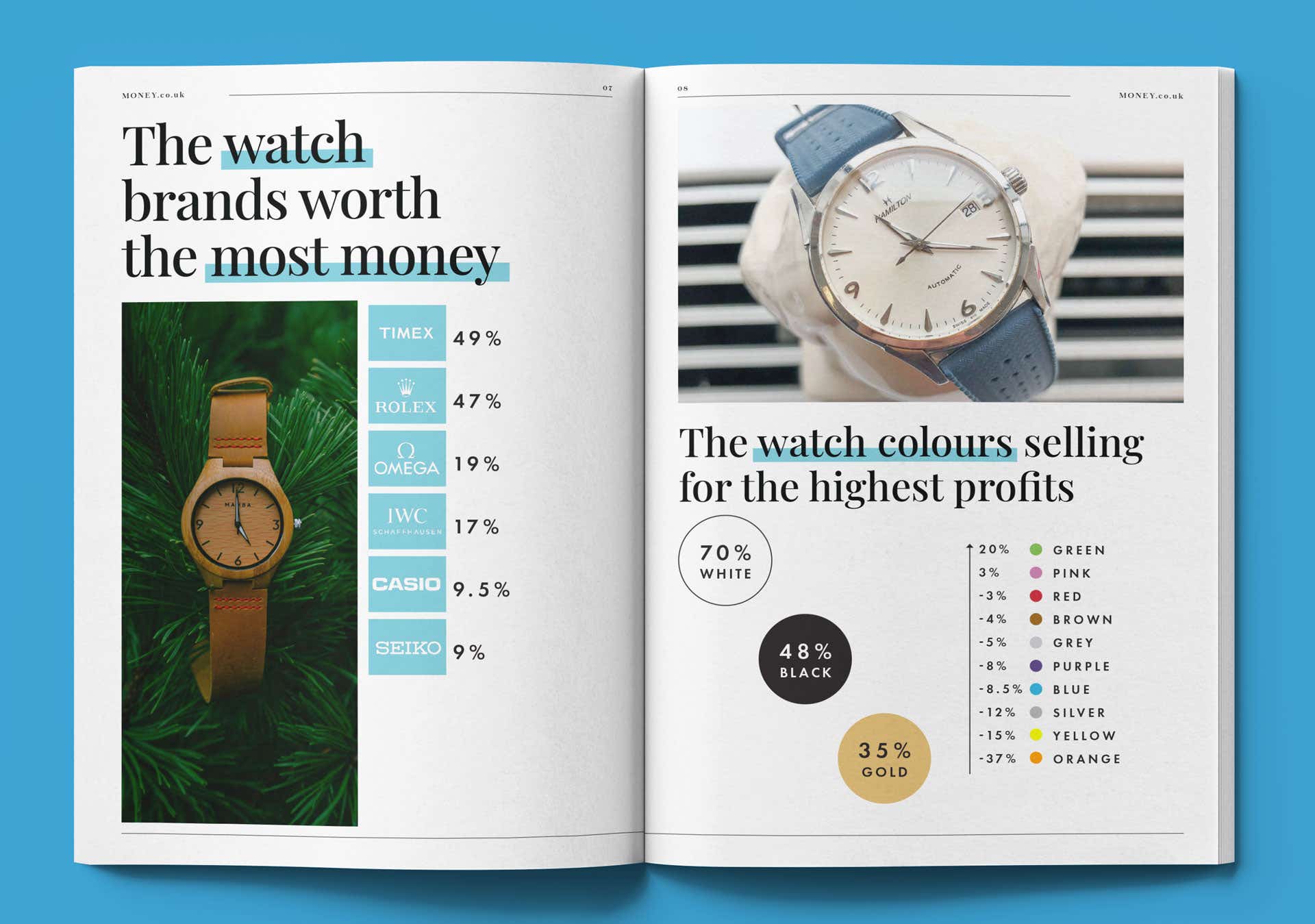 Timex is a brand famed for high quality watches without a high price tag. They often appear on lists of the best watches below £100, giving you a finish that looks like something you could have spent a lot more on. For savvy investors, Timex could be a good shout. The brand delivers average returns of 49.3%, meaning if you spent £100 on a model, you’d get £149.30 back if you sold it.

Rolex isn’t far behind in terms of returns, offering you a 47.5% premium. However, your initial output will likely be a lot more. The company has been trading since as far back as 1905, and is known for producing some of the most luxurious watches your wrist could imagine. All of that luxury comes at a cost, but if you’ve got thousands to spare, you could see a few thousand come back in years to come.

Omega is the third most lucrative watch for investors. With premiums of 19.5%, you could make a small (but very worthy) profit on the hefty outlay required to buy.

The watch brands worth the most money

If you own a white watch, now could be the time to sell. Delivering a premium of 69.8%, a white watch has the potential to offer more than a unique look. Black watches come in second place at 47.9%. Gold watches wrap up the most lucrative three, selling for an additional 35.3% of their purchase price.

Are you ready to make your next investment?

Whether you’re looking to buy a new pair of trainers, splash out on a luxury watch or invest in something else altogether, you can compare investment accounts to find online platforms to help grow your portfolio.

All data was collected from the Stock X website and used the average change in price premium to determine which colours/products are the best investments.

The '13 basic colours' were analysed across four product categories, sneakers, streetwear, handbags and watches. Each colour was then searched for in each category and the products were ordered by 'Price Premium'*, the product's price premium and the last sale price collected for the top 1,000 products (or to as many products as available). The original cost was then calculated using price premium and last sale price to work out the average change in price.