Revealed: The most heart pumping car films of all time

From spies to superheroes, cops or robbers, cinema goers can’t resist the need for speed when it comes to iconic car chases. But with thousands of action packed car scenes to choose from, which movie has the most exciting pursuits of all time?
Share this guide

Armed with a team of researchers, car insurance experts at money.co.uk screened some of the world’s most prolific car scenes to a test audience of 100 people, to find the most scientifically exhilarating movie races ever filmed.

How we did it

Crawling through Reddit, IMDB, Rotten Tomatoes and critics’ choices we compiled a list of some of moviegoers favourite on-screen car pursuits of all time, spanning decades of high octane action.

Once we had our list, our research team screened some of the best chases ever made to 100 volunteers fitted with heartbeat monitors, to track the effect the on-screen action had on the audience's heart rates.

So, if you’re in the mood for some high speed action read below for the scientifically most heart pumping car films in cinematic history.

The top 20 most exciting car pursuits in movie history, according to science 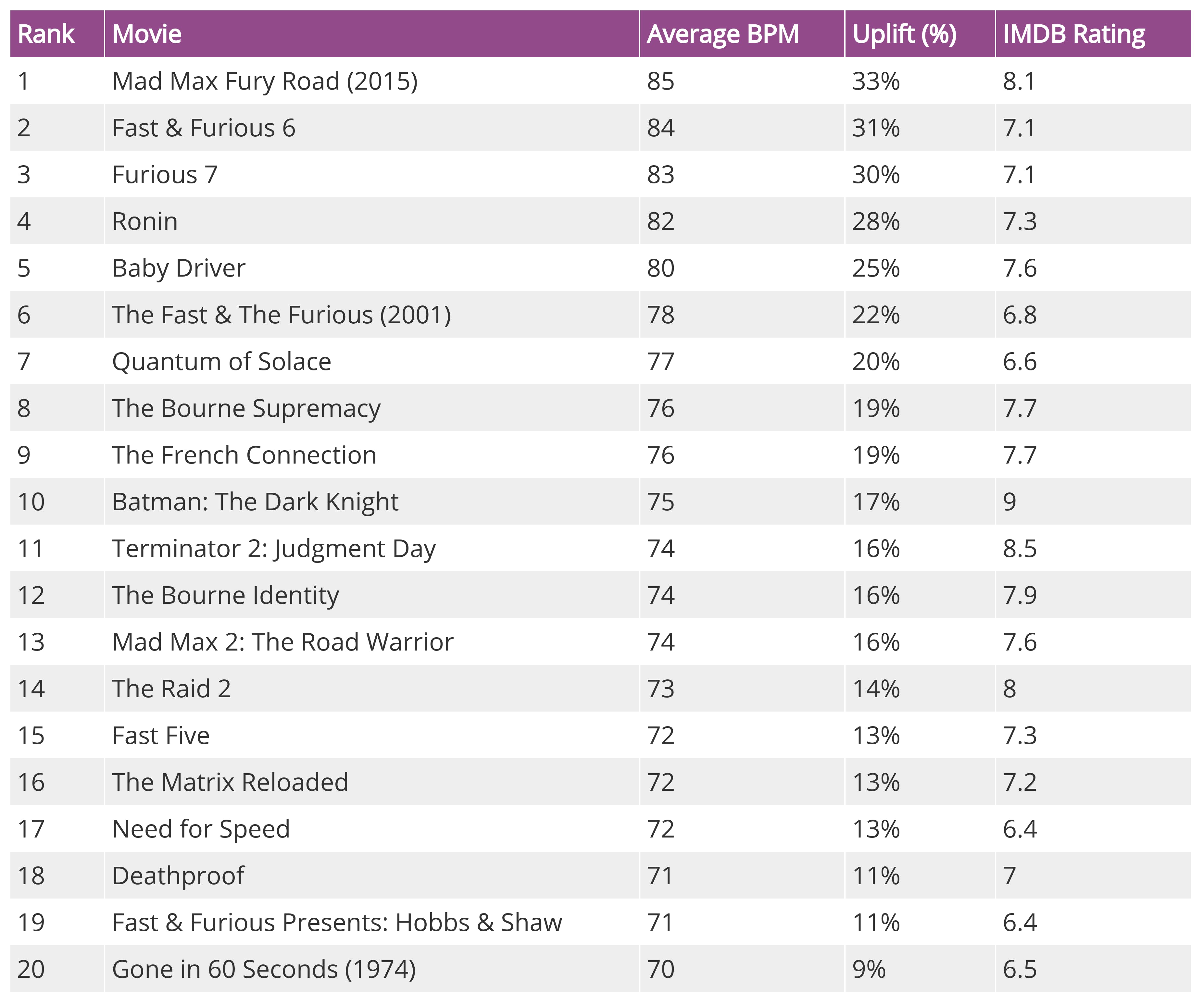 With almost the entire film taking place as one big car chase (there are actually two separate, major chases in the movie) 2015’s Mad Max Fury Road was the blockbuster that got our test subjects engines running the fastest.

According to the study, audiences’ heart rates increased by 33% during the pursuit scenes in the film, up to 85 BPM from the average resting heart rate of 64 BPM across our test subjects.

Directed by George Miller and starring Tom Hardy & Charlize Theron (who appears a few more times in the top 20), the movie was loved by movie goers and critics alike, bagging six Academy Awards and a current IMDB rating of 8.1 (the third highest on our list).

The film was one of two Mad Max movies to break the top 20, with Mad Max 2: The Road Warrior clinching number 13 on our list.

The stats in 60 seconds 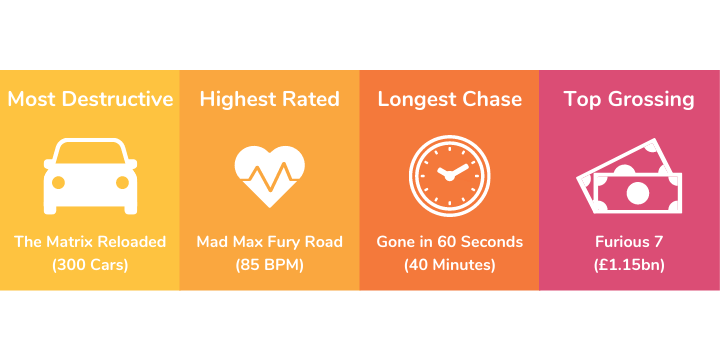 While Mad Max Fury Road would claim the top spot against tough competition, it was the Fast & Furious franchise that dominated the top 20, with five instalments of the series making it on to the list

Notably, 2015’s Furious 7, which placed third overall in excitement, also holds the honour of being the highest grossing movie on the list, bringing in upwards of £1.15bn at the box office – that’s a lot of Ford Fiestas!

Other noteworthy films on the list included The Matrix Reloaded (2003), which has the dubious distinction of being the most destructive car scenes in movie history, with filmmakers allegedly writing off 300 vehicles to shoot the exhilarating highway scene.

Though some movie aficionados may be disappointed to see classic chases like Bullit, The Rock, The Italian Job and Smoky & The Bandit not crack the top 20, 1974’s Gone in 60 Seconds did break the list in our study, despite being more than 40 year’s old. The movie also features the longest chase scene on the list, clocking at an impressive 40 minutes.

Other iconic chase scenes that have stood the test of time included Ronin (1997), Terminator 2: Judgment Day (1991) and the oldest film on the list, The French Connection (1971), who’s iconic car chase scene narrowly broke into the top 10.

The fastest and most furious

With one franchise racing ahead of all others, the Fast & Furious franchise takes pole position for the most exhilarating car franchise in cinema history.

But in the world of Fast & Furious, which is the fastest and most furious, according to science?

Our team crunched the numbers, so you don’t have to; crowning Fast & Furious 6 as the fastest and most furious, Fast & Furious movie ever made – try saying that while shifting gears.

(toggle the columns to rearrange the data)

However, it should go without saying that doing any of the outrageous stunts featuring in the film would definitely invalidate your insurance, even if you declared the multitude of modifications the Furious gang possess. Best leave it to the pros.

Is Dwayne ‘The Rock’ Johnson the most electrifying man in entertainment?

When it comes to action movies, there’s no doubt that The Rock ‘knows his role’, appearing in our top 20 most exciting car chase scene four times.

In addition to tying his Fast & Furious co-stars for the most appearances. Our study points to The Rock also being definitively the fastest and most furious of any other actor in the franchise. 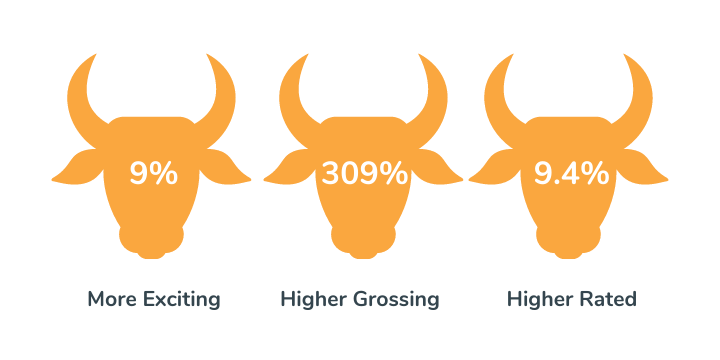 According to the research adding a little ‘SmackDown’ to the Furious franchise makes a big difference. Our study found Furious films featuring Dwayne Johnson were 9% more exciting to audiences (based on heart rate), 9.4% better received (based on IMDB ratings) and performed a staggering 309% better at the box office than those without him.

In raw numbers, that means on average adding Dwayne Johnson to the series increased average heart rates by 6 BPM, added 0.6 to audience scores and brought in an extra £565 million for each film!

Black box car insurance monitors your driving using a telematics box which is fitted to your car and sends information about your driving to the insurer. The better you drive, the less you pay.