One of the upsides of spending a lot more time at home this year has been that it has given us an excuse to sit at home and binge-watch our favourite TV shows. But with so much to choose from, it can be difficult to know which box sets are worth investing your time into.
Share this guide 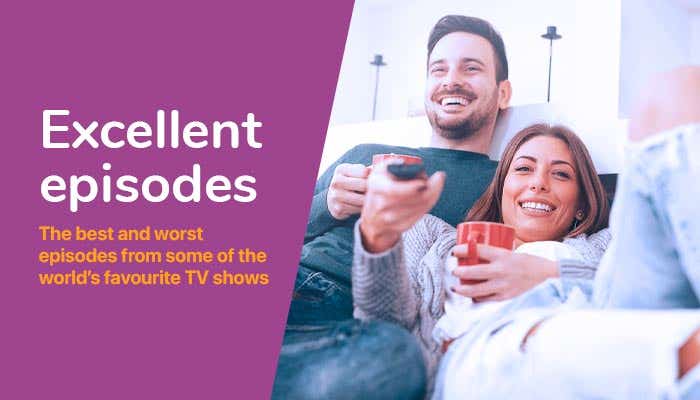 After all, while some shows keep you gripped from start to finish, there are others that take a little while to get going and those that probably should have ended a couple of seasons earlier.

We wanted to find out the very best and worst episodes from some of our favourite shows to highlight which have consistently kept us hooked, and which have lost their way.

We’ve used IMDb ratings to chart how the audience reception to some of the most popular TV shows of the last few years has changed throughout their run, as well as pinpointing the very best and worst episodes in each series. 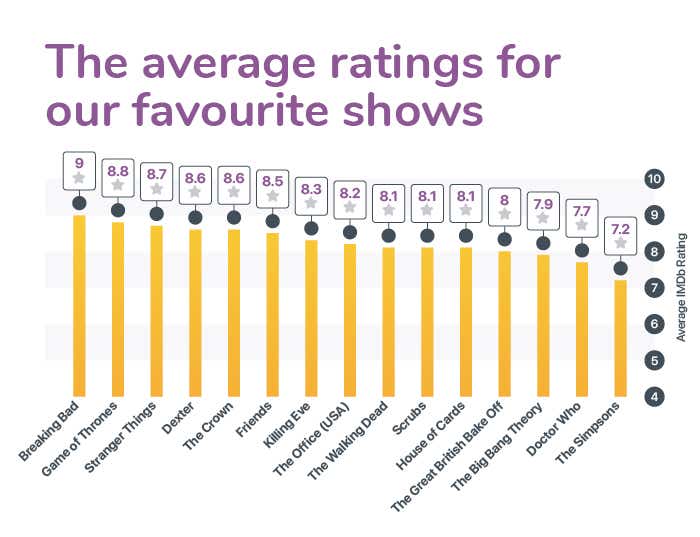 We looked at 15 of the biggest shows of the last couple of decades, from classic sitcoms such as Friends and The Simpsons to more recent streaming faves such as The Crown and Stranger Things.

Looking at the average IMDb rating across all episodes of each of the shows, Breaking Bad came out as the fans’ favourite, with an incredible average score of 9 out of 10 across all of its episodes.

In fact, most of the shows that we looked at maintained a pretty credible average score, although The Simpsons had a noticeably lower score than the rest.

This might be a surprise if you remember the show’s glory days in the 90s, but as we’ll see, ratings haven’t been great in the years since.

The best and worst seasons from our favourite shows 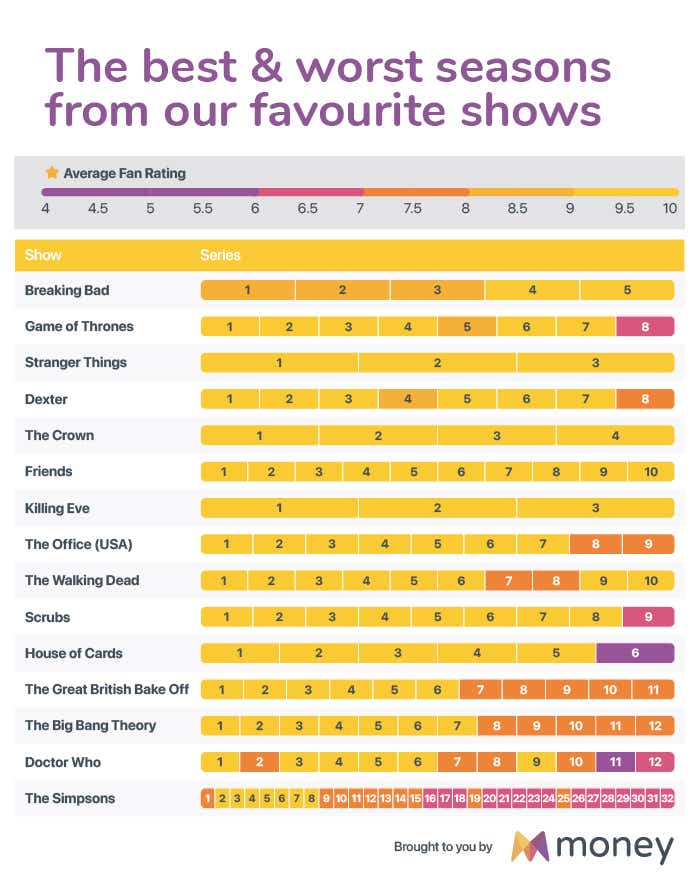 Investigating how each of the shows breaks down across their entire time on the air, we see that some were a lot more consistent in quality than others.

For example, while the likes of Friends and Stranger Things have been pretty highly rated throughout (although both have dropped the ball on the odd occasion), others have seen a definite decline in quality, often just for their final season (e.g. Game of Thrones, Dexter and House of Cards).

On the other hand, Breaking Bad proves to be a rare example of a series that has actually improved over time, starting out strong and continuing to surpass itself with each subsequent season!

So, which are the very best and worst episodes of some of the biggest and best shows of the last couple of decades? Here’s how some of our favourites fared when it comes to IMDb fan ratings. 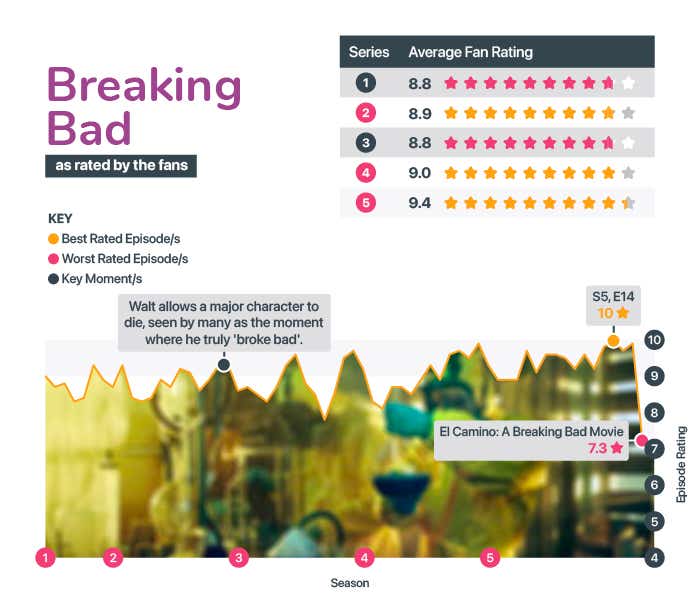 Even the best shows usually start to tail off a little bit towards the end, but the exact opposite was true of Breaking Bad, which somehow managed to get even better as time went on. In fact, one of the very last episodes, ‘Ozymandias’, is still the only TV episode on IMDb to hold a perfect 10/10 rating.

However, for some, the series should have ended there, with the sequel and epilogue movie El Camino, which was released six years later, earning a lower rating than any of the previous episodes did, including the polarizing ‘Fly’ episode from season three.

Game of Thrones as rated by fans (Average rating - 8.8) 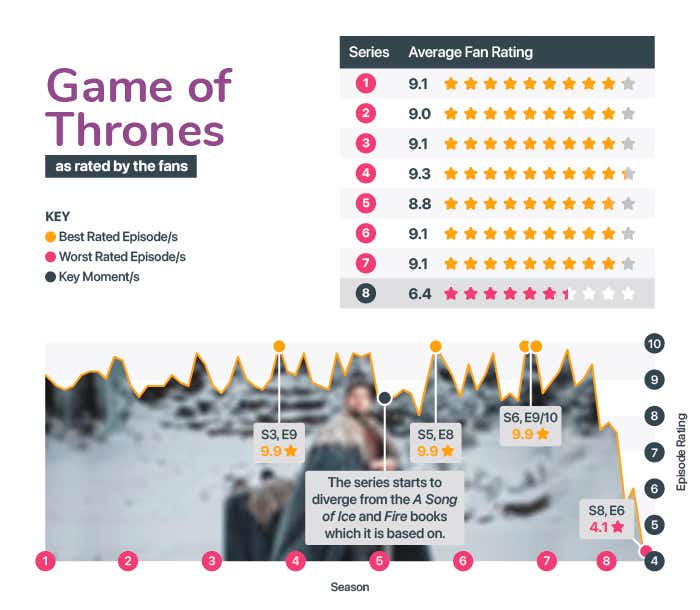 For the majority of its run, Game of Thrones established itself as one of the biggest and best TV shows of modern times, attracting record viewing numbers and a devoted fan base.

Throughout its first four seasons, the show consistently received IMDb ratings of above 9, although, for some, the warning signs were there when the plot started to diverge from the books which it was initially based on. This culminated in a disastrous final season which was criticised for its rushed story and certain creative decisions, with the overall season finale being the lowest-rated episode of the series by some way. 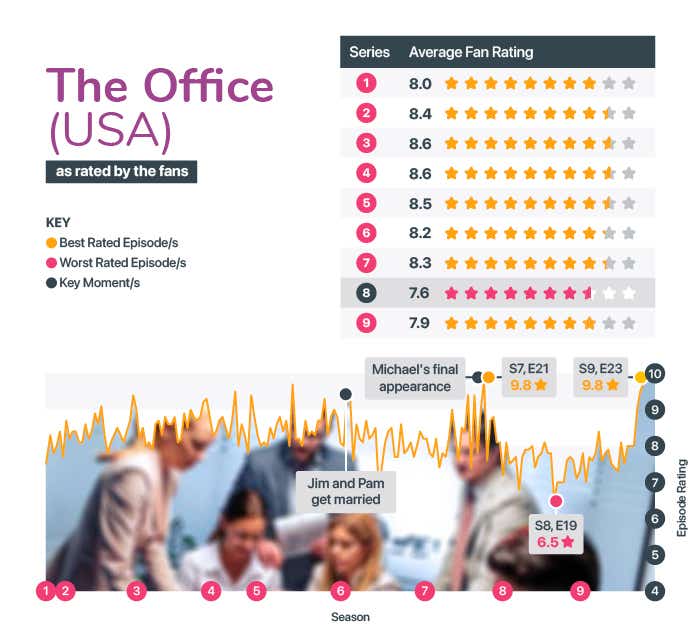 After a rocky first season where the US version of The Office stuck a little too close to the British original, it received critical acclaim over the following years, especially for Steve Carell’s performance as Michael Scott. It’s perhaps no surprise then that Michael’s farewell episode was the highest-rated of the series, but also that the show saw ratings take a nosedive after he left too, as various guest stars were brought in in an attempt to revive things.

For some, the series started to decline in quality after the marriage of Jim and Pam, as the show started to focus more on family life for the pair.

The Walking Dead as rated by fans (Average rating - 8.1) 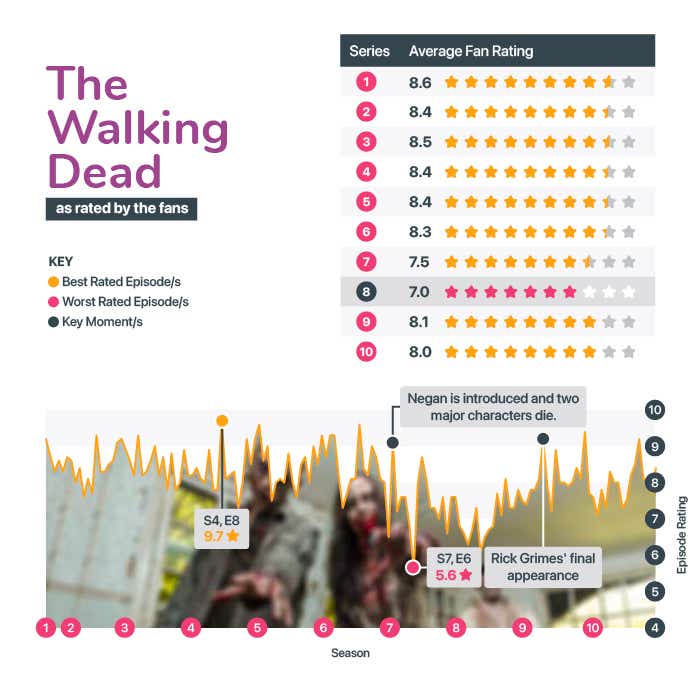 The Walking Dead has been on the air for a decade now, although the last few seasons have seen a slight drop in quality according to viewers. The show reached its high point with the mid-season finale of season four, ‘Too Far Gone’, which was the climax of the group’s conflict with The Governor, while the worst-rated episode came in season seven, with ‘Swear’, with the introduction of new villain Negan and the killing of two fan favourite characters being seen as a turning point for the show. 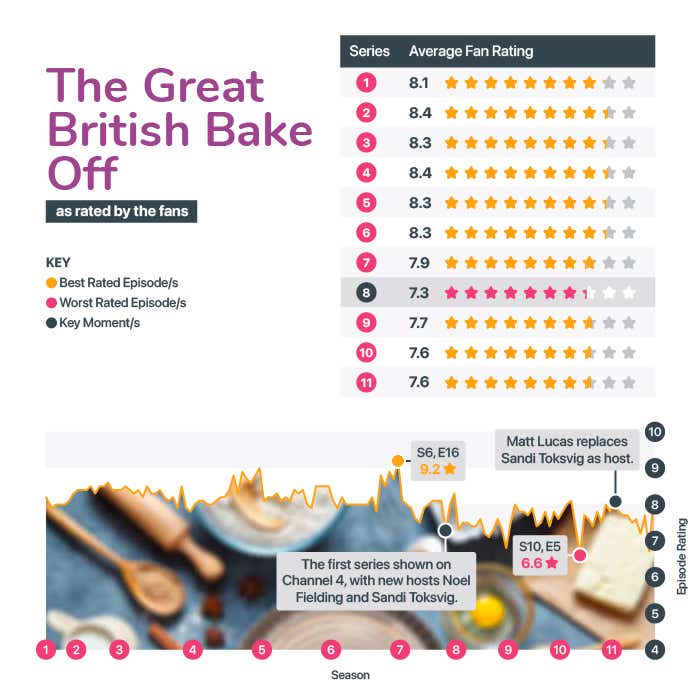 The Great British Bake Off is undoubtedly a national treasure, with consistently high ratings for each of its eleven series so far. And while viewers clearly still love the show, there was a very slight drop in ratings after the show moved from the BBC to Channel 4, when hosts Sue Perkins and Mel Giedroyc were replaced by Noel Fielding and Sandi Toksvig (later Matt Lucas).

The Big Bang Theory as rated by fans (Average rating - 7.9) 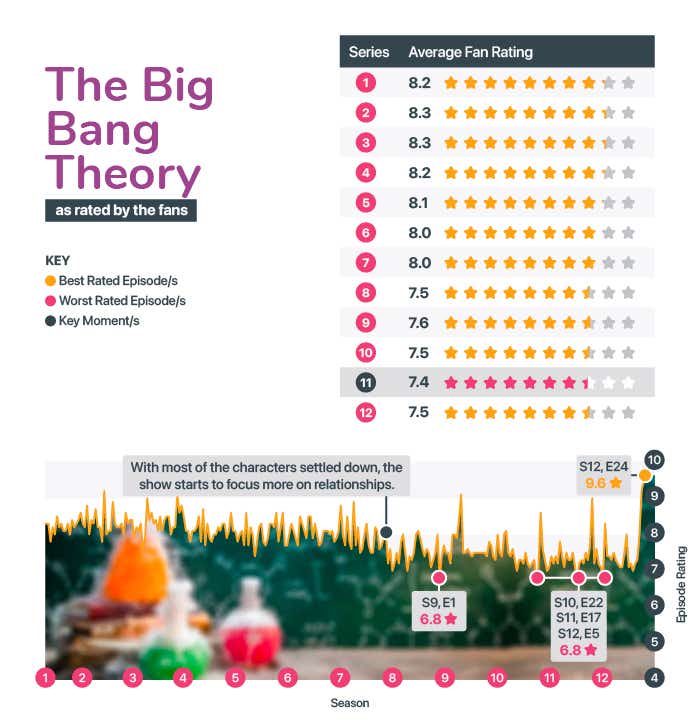 While it’s generally accepted that the quality of The Big Bang Theory started to decline in later seasons as the show started to focus more on dating and relationships rather than the science-based humour of earlier seasons, it’s also interesting that its very last episode is its highest-rated of all time, with an IMDb rating of 9.6 out of ten. 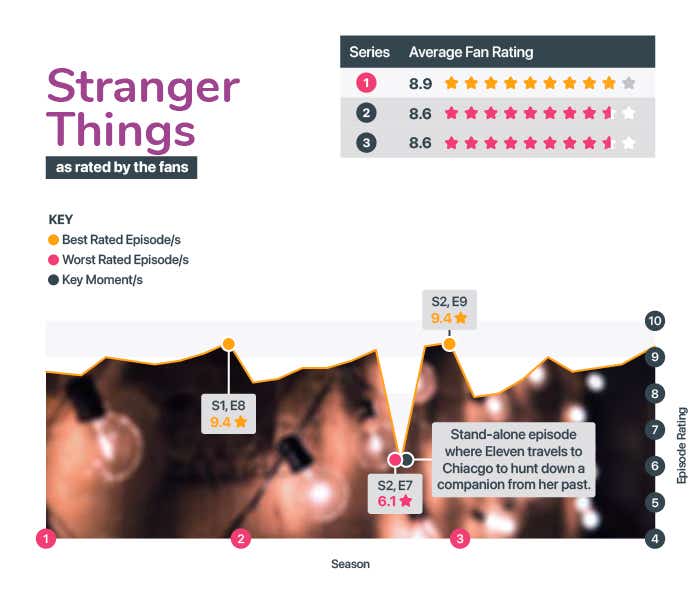 The makers of Stranger Things clearly know how to tie a season up, with the season finales of the first and second series tied as the show’s best episodes (with the season three finale not far behind).

There’s a clear winner when it comes to the worst episode though, with The Lost Sister, which completely breaks up the momentum of the second season with what is essentially a stand-alone spin-off episode, in which Eleven travels to Chicago to hunt down a figure from her past. 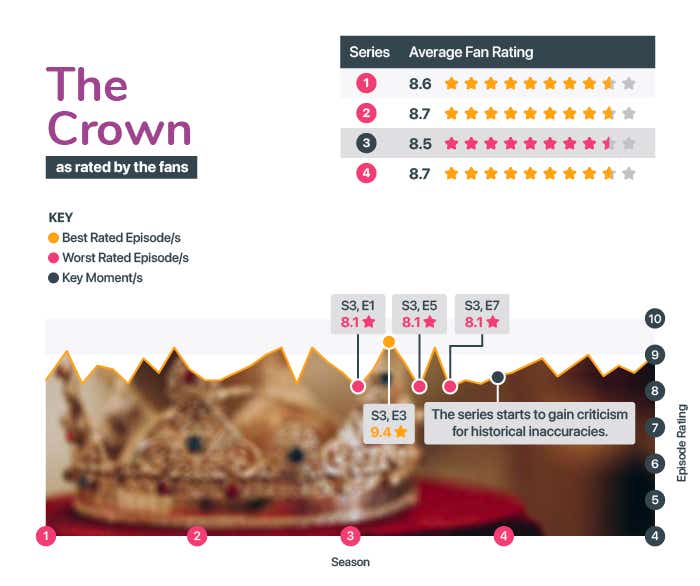 Another show which we’ve all loved watched in recent years, The Crown has been a huge hit, especially post-lockdown. While the show has received criticism for various historical inaccuracies, especially with the most recent season, it has remained consistently popular with audiences throughout each of its four seasons so far. Interestingly, each of The Crown’s best and worst episodes so far has come in its third season. 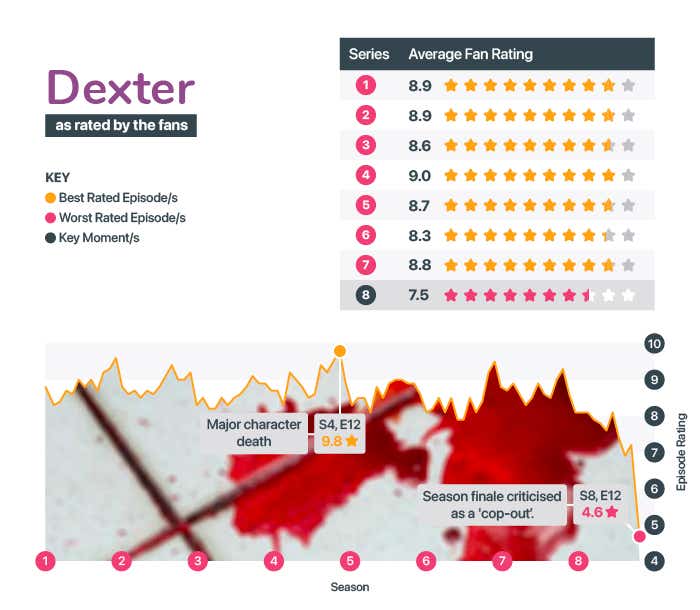 Dexter is another perfect example of a show that started out well but really started to fall off the rails towards the end. While earlier episodes such as ‘The Getaway’ received IMDb ratings as high as 9.8, reviews for the final season weren’t as kind, with the season finale receiving a rating of just 4.6 out of ten. 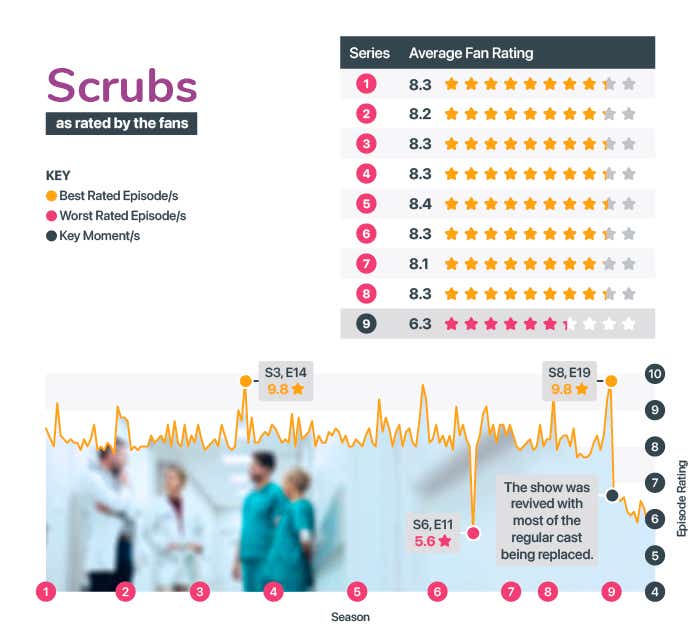 Medical comedy-drama Scrubs ended on a high note with its highest-rated episode, ‘My Finale: Part 2’, which received an IMDb rating of 9.8. Or at least that was the plan, until the show was revived as Scrubs: Med School, focusing on an almost completely new cast, with fan favourites such as JD and Turk taking a back seat. As you can imagine, ratings took a nosedive, and the show was cancelled not long after. 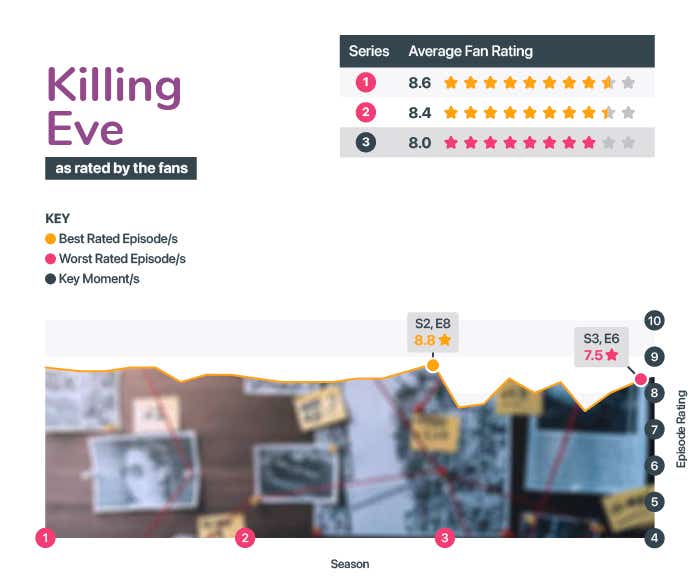 Killing Eve is one of the most popular TV shows of the last few years, receiving critical acclaim across each of its three seasons so far, although ratings have declined ever so slightly with each passing season.

Its highest-rated episode so far was the season two finale ‘You’re Mine’, which brought the relationship between Eve and Villanelle to a shocking conclusion, while the episode which received the lowest rating came in the most recent season, with ‘End of Game’. 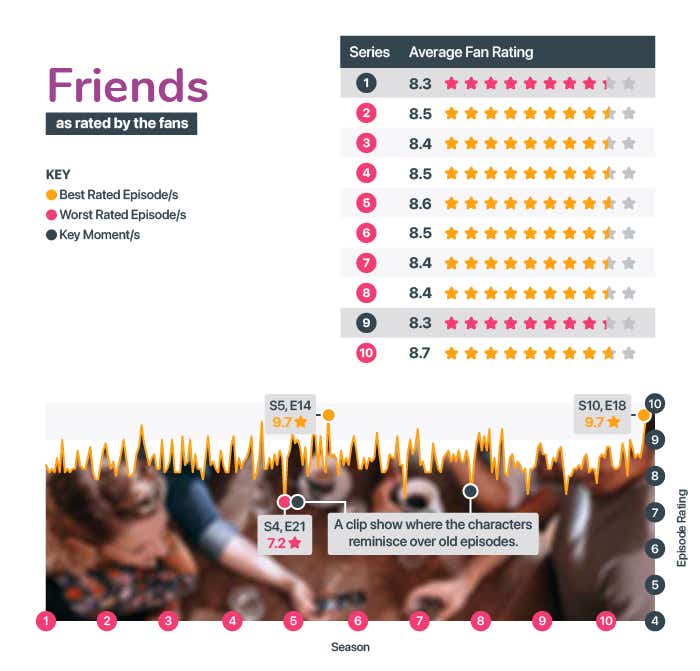 Clip shows are almost always amongst the worst-rated episodes of shows, which is the case with ‘The One with the Invitation’, which simply reuses clips from old episodes as the gang reminisce ahead of Ross’s wedding.

Aside from the odd misstep though, Friends was one of the most consistent shows that we looked at, with the average score barely changing across each of the show’s ten series.

House of Cards as rated by fans (Average rating - 8.1) 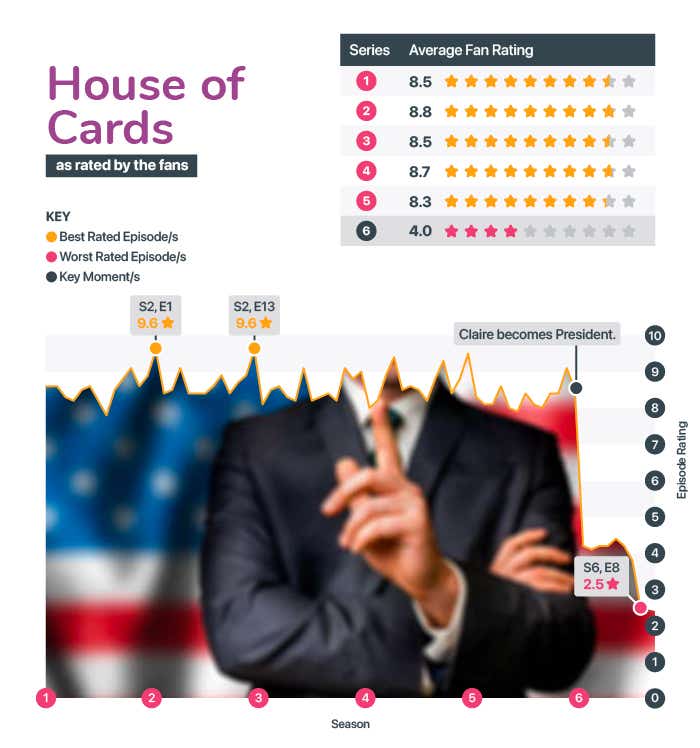 Today, there’s a new Netflix Originals series to check out every week, but back in 2013, House of Cards was the first. It also still holds up as one of the best shows that the streaming service has produced, at least up until its final season. Star Kevin Spacey was fired before the final season and at this point, the Underwoods’ goal of reaching the White House had been reached (twice), leaving the show with nowhere left to really go for its disastrous final season.

Doctor Who as rated by fans (Average rating - 7.7) 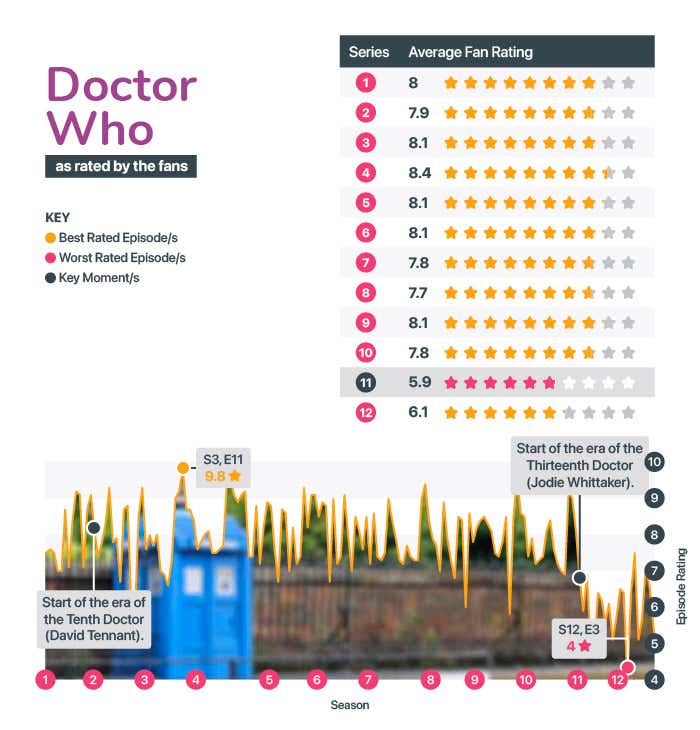 One of the interesting things about Doctor Who is that we can chart how popular different interpretations of the Doctor were with fans. Looking at the IMDb ratings since the show was revived in 2005, each of Christopher Ecclestone, David Tennant and Matt Smith enjoyed consistently high ratings, although it’s clear that fans were less keen on the portrayals of Peter Capaldi and particularly Jodie Whittaker.

The Simpsons as rated by fans (Average rating - 7.2) 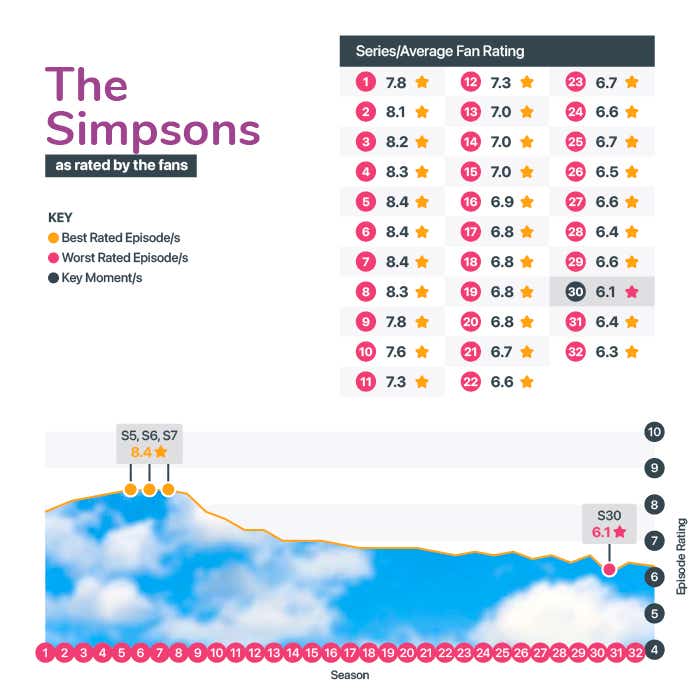 The moment when The Simpsons passed its ‘Golden Age’ is hotly debated amongst fans, but the thing that almost everyone agrees on is that the classic show has declined in quality over the years.

Many turning points have been pushed forward, most prominently the season nine episode ‘The Principal and the Pauper’. The episode was one of the first during Mike Scully’s tenure as show-runner, a period where the show moved away from character-driven plots toward a more ‘gag-heavy’ approach, which coincided with the show’s initial creators spending more time on their new series, Futurama.

While this is just a small sample of the many box sets that are available to stream, we can see that even the very best shows have the odd episode that misses the mark.

And while sometimes a dodgy episode can easily be skipped on your next binge-watch, others mark the start of a downward spiral for our favourite shows.

On the other hand, some of the ratings show just how consistent some series have been, even over a number of years on the air!

Whichever box set you are streaming at the moment, make sure you’re getting the best connection at a fair price by comparing broadband deals.