Keen to hit the adrenaline-pumping theme parks but feeling overwhelmed by choice and by budget? The Best Value Theme Park Report from money.co.uk takes us on a rollercoaster ride through the most affordable options out there for thrill-seeking families.
Share this guide

After the ups and downs of the last 18 months, many families will be excited to book a theme park adventure. In 2019, Walt Disney World’s Magic Kingdom was visited by nearly 21 million people, and if that’s anything to go by, 2021 is set to be the biggest year ever for theme parks all around the globe.

There is a seemingly endless list of destinations around the world boasting impressive roller coasters, live shows, parades and food options, So it’s easy to get in a spin when it comes to booking our next theme park adventure.

From seaside locations in the UK, to fairytale-inspired attractions across the pond, the new Best Value Theme Park Report from the personal finance experts at money.co.uk, reveals which theme parks around the world offer the best value for families looking to stretch their savings and enjoy a much-needed family break.

Taking the world’s most visited theme parks, our consumer spending experts calculated which parks have the lowest cost-per-ride, and offer the best value for money.

Prater amusement park in Leopoldstadt, Austria tops the list as the most affordable theme park for families. A day pass for two adults and two children at the nostalgic theme park costs £154.76, and with over 250 attractions including a Giant Ferris Wheel with views across the whole park, a visit to Prater will set you back just £0.62 per ride.

Beto Carrero World in Penha, Brazil is the second most affordable theme park in the report. With over 100 white-knuckle attractions to choose from, a family ticket costs just £75.31, which averages out at just £0.75 per ride.

The Castle of Nations is a stand out attraction at Beto Carrero World, it was inspired by medieval castles and its artistic painting was designed so that visitors can feel the magic and fantasy atmosphere of the theme park upon arrival.

Rounding off the top three is Gold Reef City theme park in Johannesburg, South Africa. The attraction, which boasts 46 gold-rush themed attractions, may be located on an old gold mine but it won’t cost you the earth. Families can expect to pay just £0.88 per ride, as a day pass for a family of four will set you back just £40.55.

Visitors at Gold Reef City theme park should check out the Anaconda ride, the perfect attraction for thrill seekers with a well-earned nine out of 10 Fear Factor rating. This thrilling ride is for adrenaline junkies who crave twists and turns at high speed.

Despite its undeniable global appeal and popularity, Universal Studios Hollywood in California emerged as the most expensive theme park to visit, with a day pass costing £365.73 for a family of four. Taking into account the 21 attractions found within the park, this hefty sum works out at a staggering £17.42 per ride.

The cheapest theme park hotels around the world

For those who feel a day simply isn't long enough, many theme parks now boast on-site hotels or have partner hotels nearby for families that want to extend their visit and make the most of all the theme parks have to offer.

Not only are these hotels convenient, they have many additional benefits; complimentary drinks to queue jumping and extended park hours, alongside the convenience of staying nearby. Imagine spending the day riding white-knuckle coasters and then loading everyone up into your car and tackling the long drive home, when you can just stay the night in a theme park hotel.

From Brazil to Holland, we’ve analysed theme park hotels around the world, to determine which offer the best value for money for an overnight stay, for two adults and two children.

Beto Carrero World in Penha, Brazil takes the top spot as the cheapest hotel for a family of four. The hotel, which is situated just 3 km from the theme park, will cost families around £28.87 for an overnight stay.

In total, a day pass with overnight accommodation at the biggest theme park in Latin America will cost a family of four £104.18.

Djurs Sommerland, in Djursland, Denmark, takes second place, with nearby accommodation costing just £57.62. Combined with the £139.21 family day pass tickets, a family of four can enjoy the full theme park experience for just £196.83. The park is sure to be a hit among thrill-seekers of all ages, after being voted the best family park in Europe, with under one million guests per year at the Park World Excellence Awards in 2019.

Six Flags Over Georgia, the 290-acre theme park located west of Atlanta, Georgia, rounds up the top three cheapest theme parks, with overnight accommodation for a family of four at a partner hotel costing as little as £85.97. As the second Six Flags to open its doors back in 1967, the park is home to some of the top ranked steel roller coasters in the world, with some of the top-rated including: The Twisted Cyclone, Goliath, Mind Bender and Acrophobia.

Families wanting to experience all the rides, shows and attractions the theme park has to offer, can expect to pay approximately £216.59 for their park tickets and hotel stay.

The most-searched theme parks in every city in USA 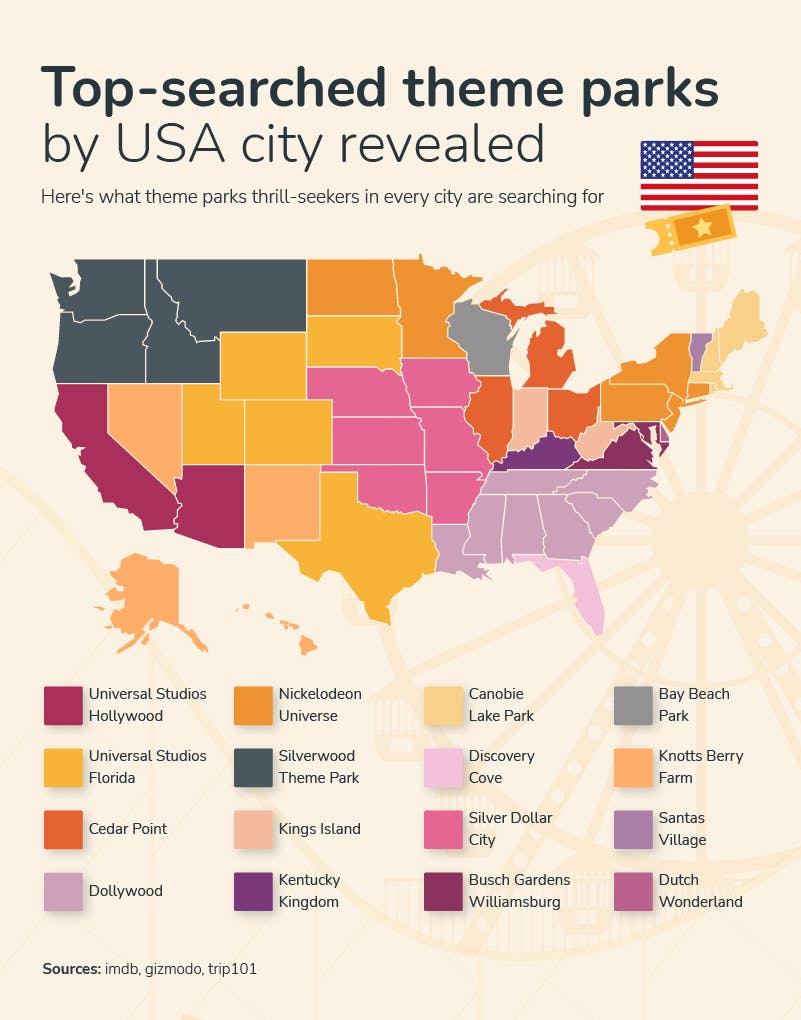 Whether you’re looking to avoid an overly-crowded park, or scream your head off with a group of likeminded adrenaline junkies, our report reveals the most searched-for theme parks in the USA.

Taking a seed list of 30 theme parks located across North America, we’ve uncovered how many times each destination was searched by residents living in the most populous city by state.

Dollywood was revealed as the most popular theme park across the board with seven US cities preferring the family attraction which boasts more than 50 world class rides, high-energy entertainment and award-winning dining.

Tennessee residents are such huge devotees of Dollywood, the iconic award winning theme park that first opened its doors in 1986, that they search for the local attraction 104,000 times in the past 12 months.

Georgia, Alabama, Louisiana, South Carolina, and Mississippi, who have made a total of 98,030 combined searches in the last 12 months.

Nickelodeon Universe in Bloomington, Minnesota emerged as the second most popular attraction, with those living in New York searching for the amusement park the most frequently, at 164,500 in the last 12 months alone. The indoor attraction is renowned for its rides based on Nickelodeon’s popular franchises and is home to 27 thrill-seeking attractions that are suitable for all the family.

Other notable cities searching for Nickelodeon Universe included Pennsylvania, Minnesota, New Jersey, Connecticut, and North Dakota, where residents were searching for the Universal film-inspired theme park a combined 106,920 times in the last 12 months.

Being able to share and pass down nostalgic elements of childhood, and make new memories with your own family, is a special component of any family trip. This is especially true when visiting theme parks still operating attractions that have stood the test of time and span a number of generations.

Successful Hollywood films and amusement park rides have a long-standing relationship with one another.

From Disney classics to Star Wars, and Indiana Jones to Harry Potter, theme park rides inspired by movies offer up endless amounts of family entertainment, and can make a substantial amount of money for the parks in which they reside.

Our report analyses 34 famous theme park rides based on films, and determines which blockbuster film has the most costly counterpart, when it comes to visitor attractions.

A ride filled to the brim with adventure and songs, the original Splash Mountain opened in 1989 and is now located in Disneyland, Tokyo Disneyland and Magic Kingdom. The log flume ride had a construction cost of £162,502,875, yet the 1946 film ‘Song Of The South’  that originally inspired the attraction had a budget of just £1,535,514, indicating a 99% cost difference.

In second place as the most costly construction compared with its film counterpart is the Seven Dwarfs Mine Train, situated at the Magic Kingdom in Walt Disney World Resort.

The family ride gives visitors the chance to race through the diamond mine featured in the film and swerve in and out of the age-old mountain.

The 1937 film Snow White and the Seven Dwarfs was Disney’s first animated feature-length film, with Snow White also being the first member of the Disney Princess line-up, providing the basis for later heroines such as Cinderella, Aurora from Sleeping Beauty and Ariel from The Little Mermaid.

Rounding up the top three is Saw: The Ride, a steel roller coaster in Thorpe Park, England that cost an impressive £10,833,525 to construct and is inspired by the infamous movie horror franchise.

The original Saw, released back in 2004 received generally mixed reviews from critics, but performed surprisingly well at the box office. It went on to gross more than $100 million worldwide and became, at the time, one of the most profitable horror films ever.

The Best Value Theme Parks Report from the personal finance experts at money.co.uk analyses theme parks in Europe, North America, South America, Oceania, and the Middle East to determine which offer the best value for money.

Taking a seed list of 50 of the most popular theme parks around the world, the report determines which theme parks are the busiest and which offer the best overall value for families.

The personal finance experts developed the ranking based on the following criteria:

The Best Value Theme Parks Report also determines the cost difference between amusement rides based on films and the film production budgets and box office revenue.

Taking a seed list of 34 of the most iconic theme parks, the report analyses which film franchises have the most successful theme park rides.

The personal finance experts developed the ranking based on the following criteria: