They say that life’s about the journey and not the destination, and nowhere is this more true than when setting off on a road trip across the USA.
Share this guide 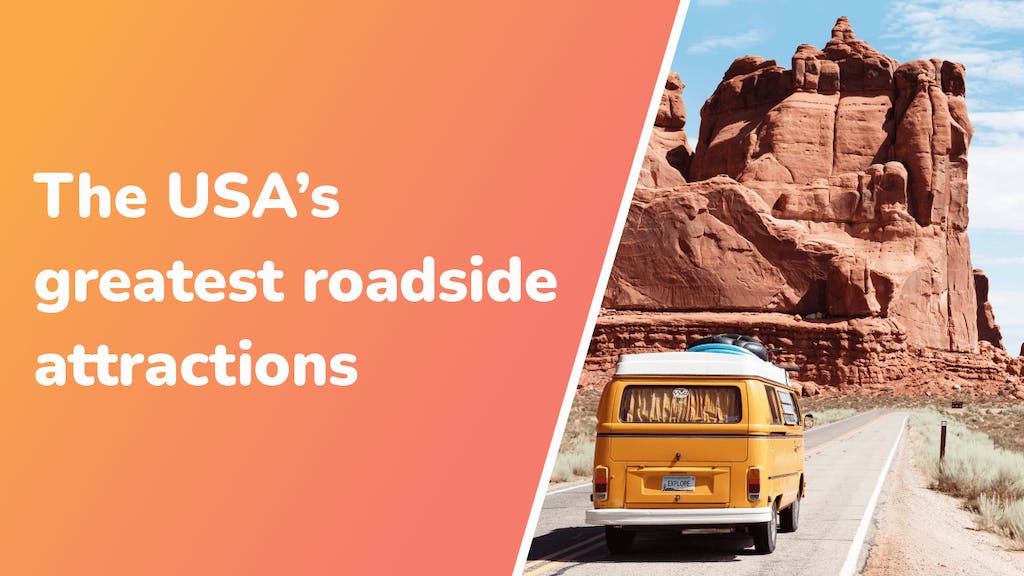 Between the national parks, amazing natural formations and stunning coastlines, it's no wonder that a USA road trip is such a common bucket list item.

But just as iconic as the country’s natural beauty are the quirky and offbeat roadside attractions that appear along its highways.

While the end goal of your trip might be to visit Gettysburg or see the Grand Canyon, stopping off to see the likes of the World's Largest Ball of Twine or the SPAM Museum is the only way to get the full American road trip experience.

But with thousands of weird and wonderful attractions to see along the way, which ones are worth the stop?

We analysed hashtag and TripAdvisor data to find the best and most Instagram worthy roadside attractions to visit on your next road trip.

Wherever you are setting off to, compare providers to ensure you have the best car insurance deal to cover your road trip. 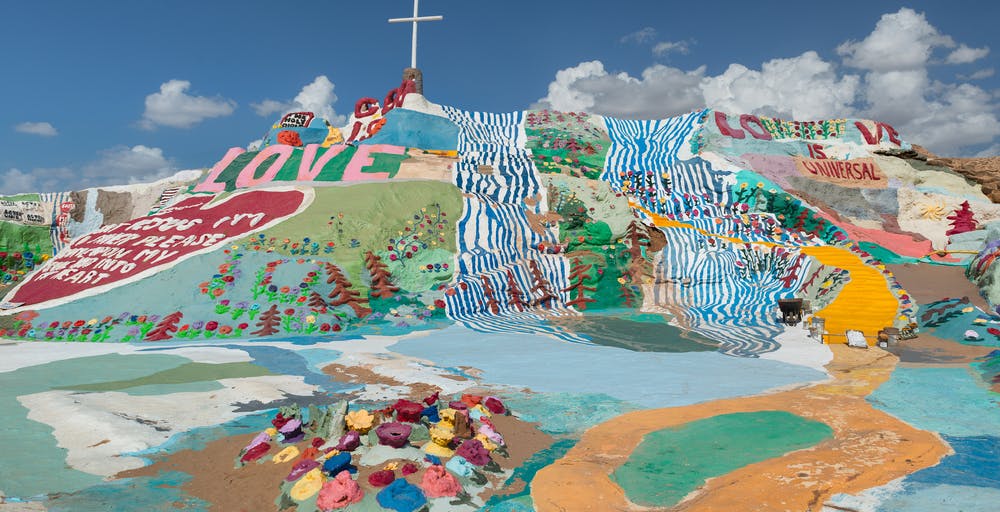 At 50 feet tall and 150 feet wide, Salvation Mountain was the life work of Leonard Knight who spent three decades creating this giant piece of folk-art in the Sonoran Desert.

During its construction visitors would donate paint to help Knight finish his work and it’s estimated that more than 100,000 gallons were used to paint the Bible scriptures, flowers, and birds that decorate the mountain.

This colourful mound in the middle of the Desert has become an Instagram hotspot in recent years, and with 165,046 posts featuring #SalvationMountain, it’s also the most insta-worthy attraction in our study 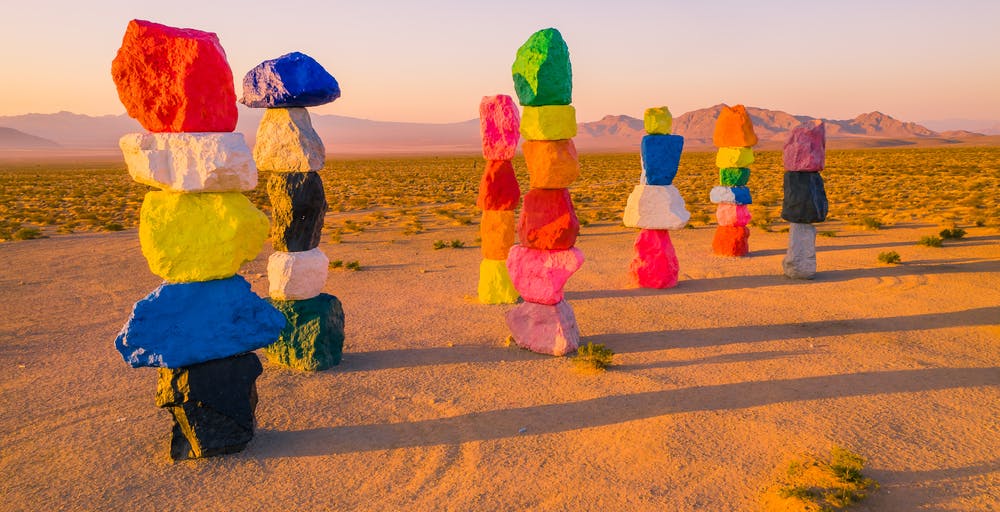 Situated about 30 minutes outside of Las Vegas just off Interstate 15, anyone wishing to see Seven Magic Mountains might want to move quickly. Originally scheduled to be on view for two years, its surprise popularity earned it a three year extension that’s set to expire at the end of 2021. 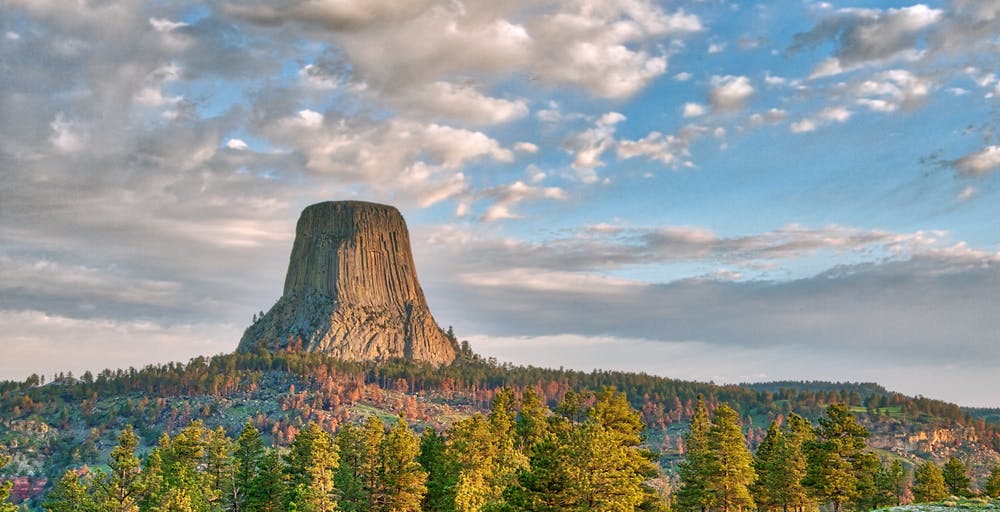 A sacred site to many Native American Tribes and America’s first ever National Monument, Devils Tower is also a popular rock climbing attraction, drawing 5,000 to 6,000 rock climbers a year according to the National Park Service.

The Steven Spielberg fans out there might recognise this impressive geologic formation from its appearance in 1977’s Close Encounters of the Third Kind. 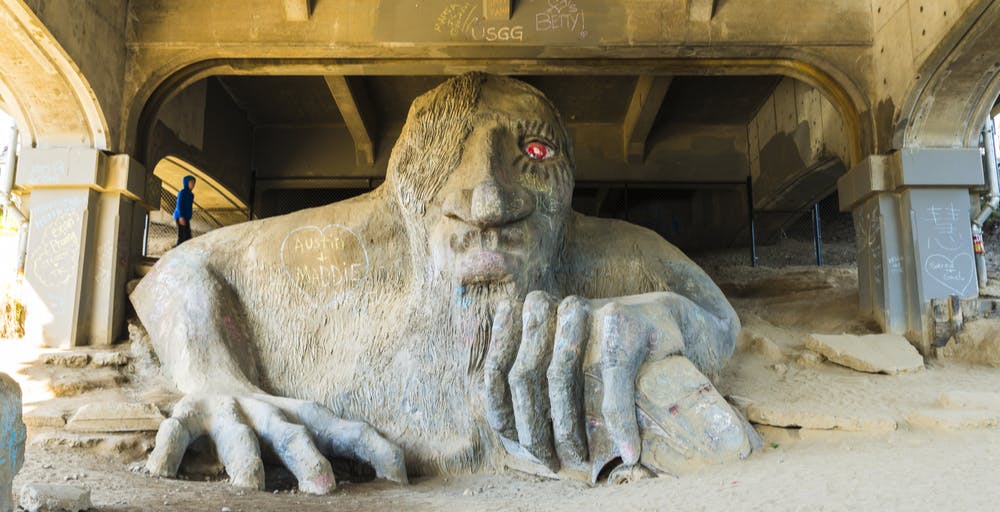 Since 1990 the Fremont Troll has taken up residency under one of Seattle's oldest bridges.

Created by a team of artists that includes sculptor Steve Badanes, the Fremont Troll is popular with both tourists and locals, appearing in everything from wedding photos to music videos, and even starred alongside Julia Stiles, Heath Ledger, and Joseph Gordon-Levitt in 10 Things I Hate About You.

Despite his fame the Troll has had some difficult times and is often the target of spray paint makeovers. 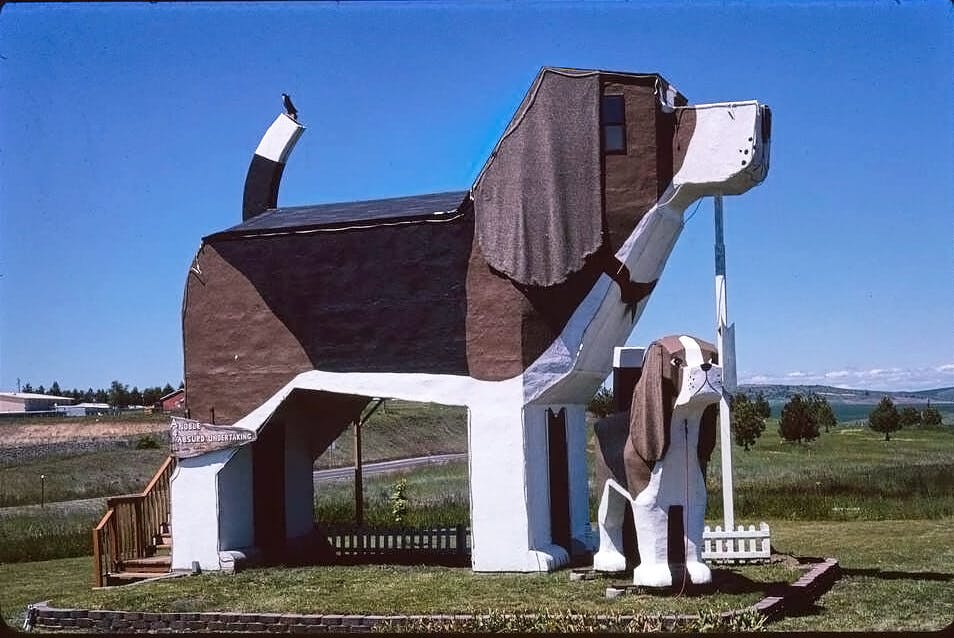 Known as Sweet Willy, this giant beagle stands at 30 feet tall - giving him the honour of being the world’s biggest beagle.

Sweet Willy is also a B&B that can sleep four people thanks to a bed in the main section and two singles in the head.

At $158 per night with a two night minimum stay, guests can enjoy a stroll around the grounds of Dog Bark Park where they’ll also see sculptures of other animals such as bears, fish, and moose, or visit the gift shop and take home a chainsaw-carved beagle of their own to commemorate the trip.

Using the results of the study, we mapped the most efficient route to see the top 25 roadside attractions in the USA in a single trip. 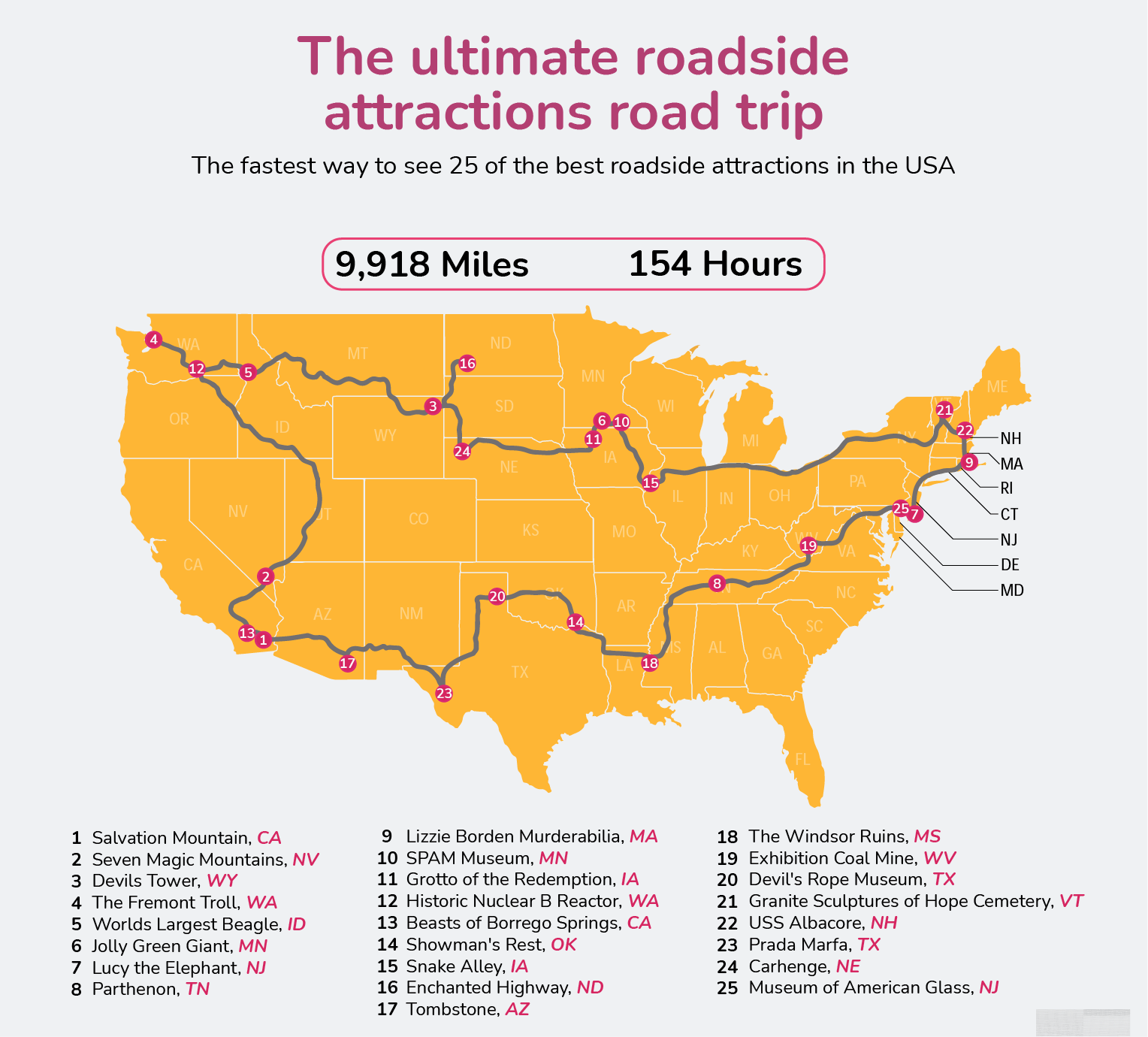 Plotting a cyclical route so that travellers can begin at any point and end where they began, the journey would take roughly 14 days to complete, covering a distance of 9,918 miles with a total of 154 hours spent on the road.

Our ultimate roadside attractions road trip map shows the most efficient way of seeing all of the attractions included in our list, as well as where they ranked in our study.

While there’s no shortage of attractions to choose from when driving across the USA, some are naturally more photogenic than others.

To find those that are most deserving of a place on your camera roll, we scoured Instagram hashtag data to find which of the attractions included in our study make for the most picturesque stop-offs.

While they might not be the most insta-worthy or the best equipped for visitors, there’s no shortage of weird and unusual attractions scattered throughout the USA that might interest the more curious travellers out there.

Although they missed out on a spot in our Top 25, we’ve highlighted 10 of our favourite offbeat tourist traps that were included in our study. 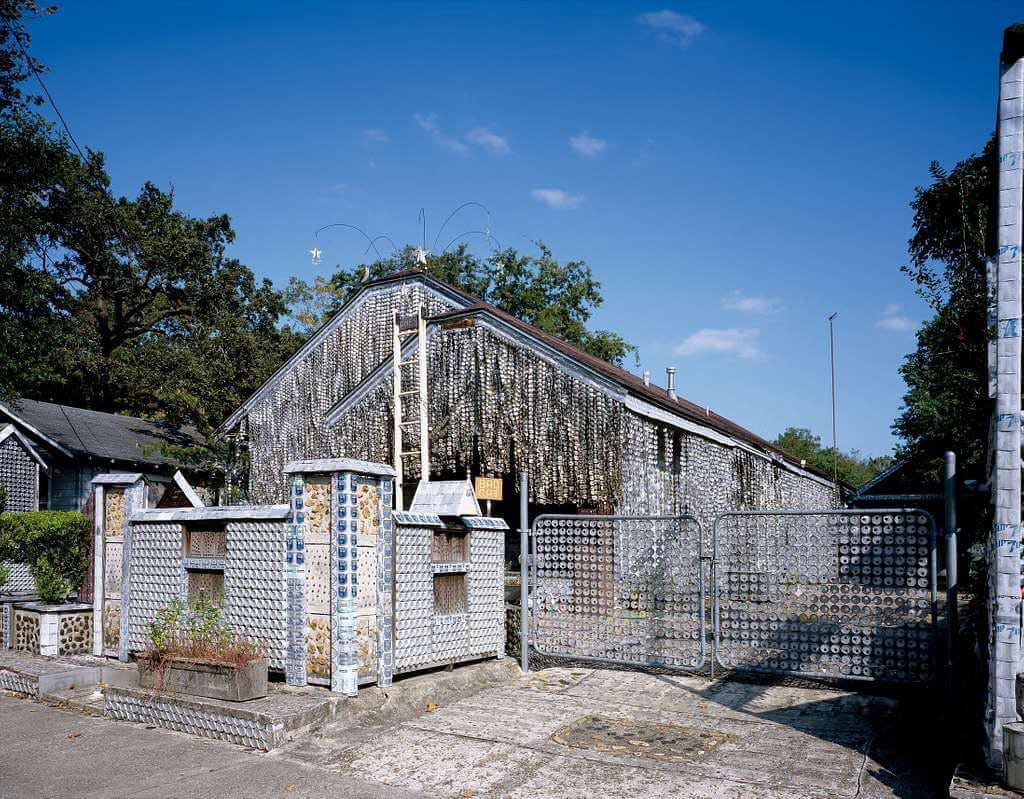 Sitting in a fairly ordinary-looking street, the Houston Beer Can House is the work created by John Milkovisch and started as a landscaping project in 1968. Fast forward 18 months and the garden makeover complete, he turned to the house itself and began adding aluminium siding made from old beer cans to the walls.

Over the next 18 years, Milkovich kept adding to his project with mobiles, fences, sculptures, and even wind chimes and curtains made from the ring pulls - using roughly 50,000 beer cans in the process.

Today, Beer Can House is owned by Orange Show Center for Visionary Art, a non-profit organisation that opened the house to the public. 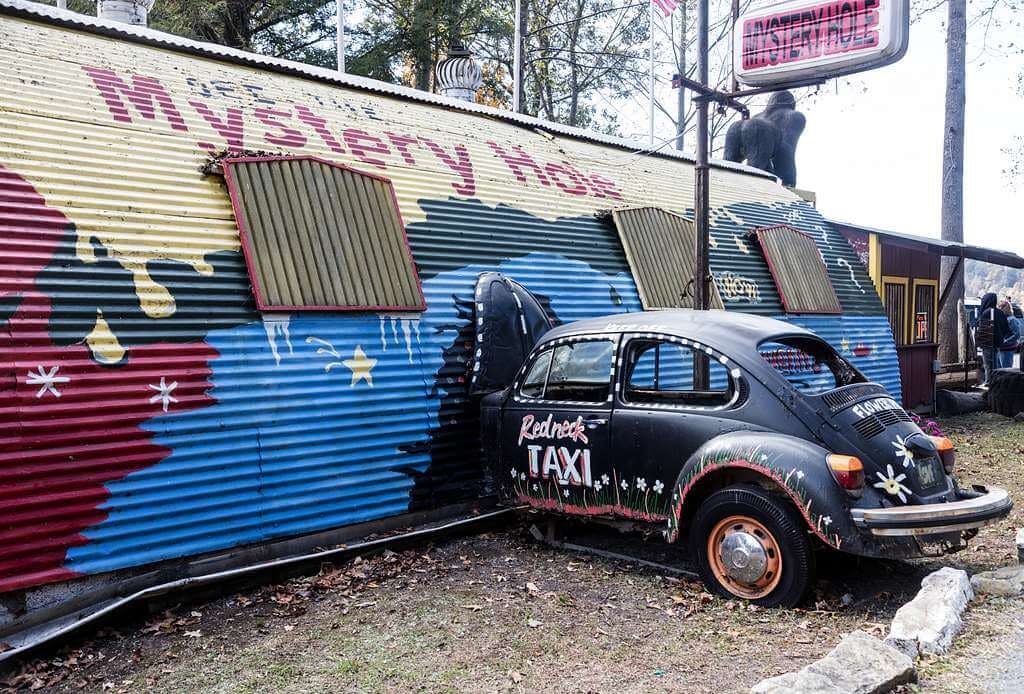 Opened in 1973, owner Donald Wilson claimed to have discovered an underground gravitational anomaly that had to be seen to be believed.

The promise of gravity-defying displays along with its eye-catching gift shop made the Mystery Hole a hit with passing tourists. However, as road trip culture declined, so did the number of visitors, and by 1996 the Mystery Hole had closed.

Left to the elements and local vandals, the Mystery Hole had some rough years, until it was purchased by new owners and is still open to the public today. 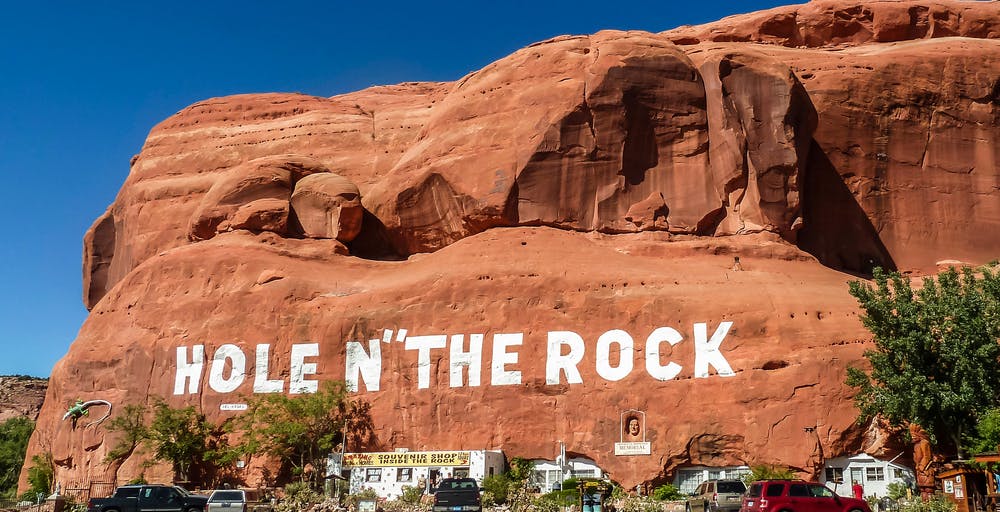 While the name suggests that the Hole n” the Rock is some sort of geological anomaly, it’s actually a 5,000 square foot home that was carved directly into the rock in the 1940s.

Albert Christensen spent 12 years digging, carving, and blasting his way into the rock face before eventually moving his family into the cave and opening a diner for passing tourists.

Today, Hole n” the Rock offer tours of Christensen’s home where visitors can walk around a selection of the 14 rooms and see shelving carved straight into the walls, a fireplace with a 65-foot chimney, and a bathtub made from the rock. 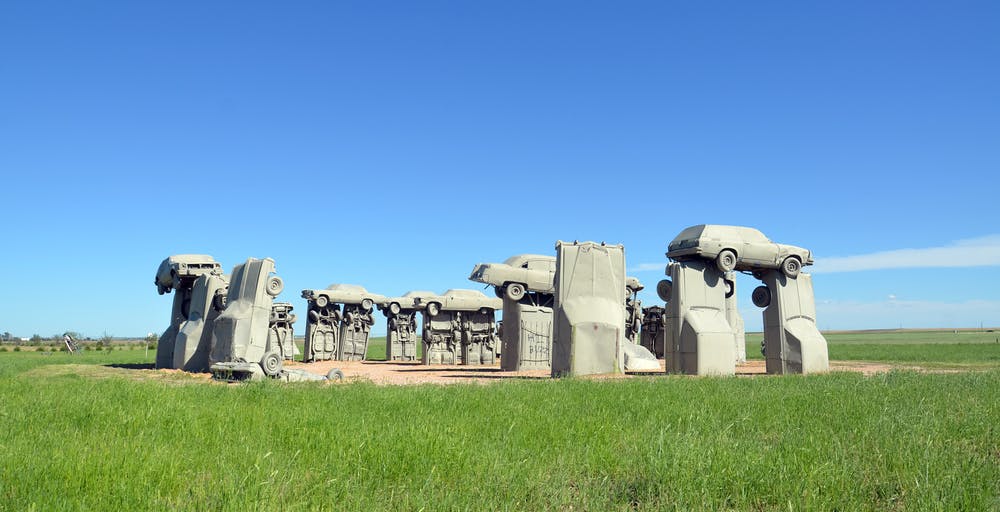 Much like it sounds, Carhenge is a collection of old cars arranged to resemble Stonehenge.

Carhenge is the creation of Jim Reinders, who made this impressive display in 1987 as a memorial to his father.

While it took a little while for it to grow on the locals, Carhenge has become a hit with tourists and reportedly attracts up to 80,000 visitors a year. 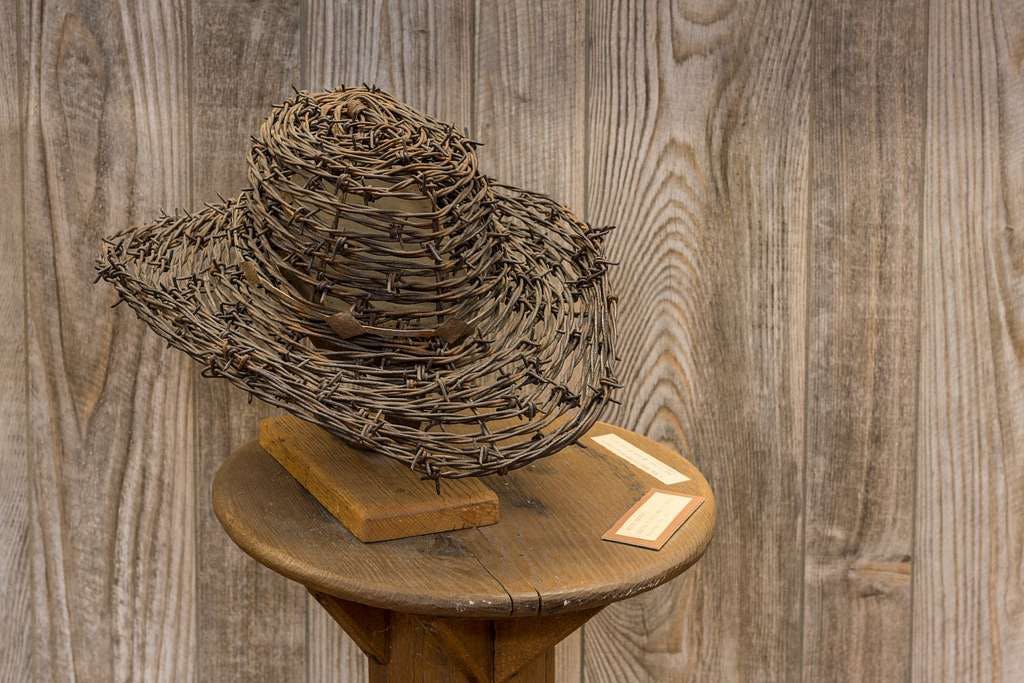 This specialist museum in McLean, Texas is dedicated entirely to the history, usage and types of barbed wire.

With historical documents, photos, and barbed wire sculpture, the Devil’s Rope Museum is thought to have one of the largest collections of published material about barbed wire - as well as some 2,000 samples of different types of barbed wire.

6. The Desert of Maine, Maine 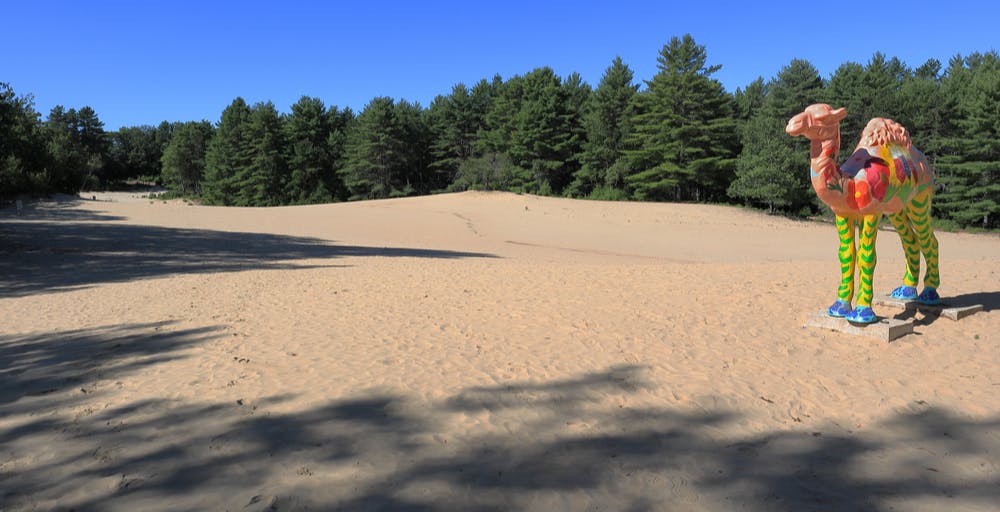 Situated in one of the greenest states in the US, The Desert of Maine sits on a 40-acre plot and has been welcoming tourists for almost 100 years.

The Desert of Maine actually started life as a farm, however, generations of over-farming and not rotating crops, leading to soil erosion. Over a few years, the small patch of sand began to grow until the entire pasture was covered.

The Tuttle family who had originally owned the land had no choice but to leave, and in 1919 Henry Goldrup bought the land for a mere $300, opened the site as a tourist attraction and the rest is history. 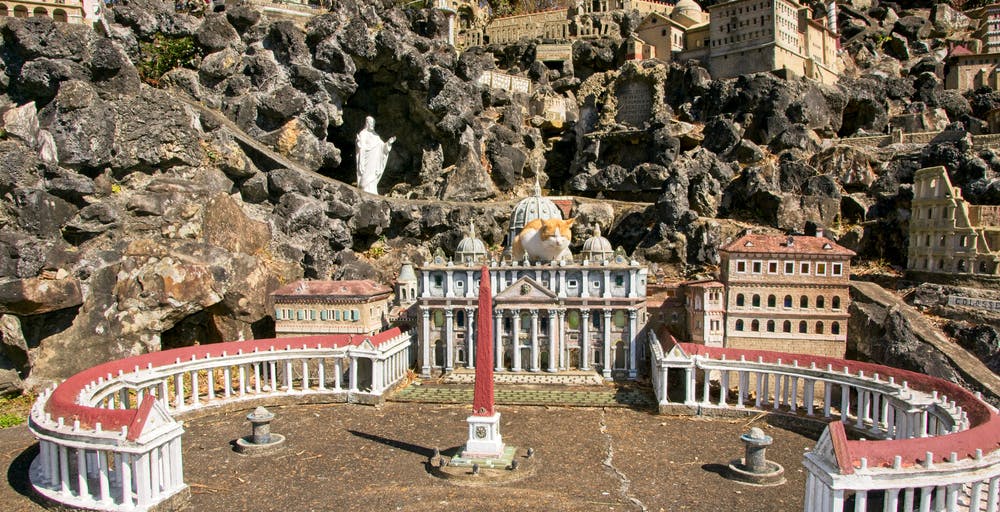 Born in 1878, Brother Joseph Zoettl was a Benedictine monk who joined St. Bernard Abbey at just 14 years old where he spent most of his life in prayer and working the Abbey’s powerhouse.

However, when not shovelling coal into a furnace, Brother Joseph enjoyed making miniature versions of famous buildings and religious shrines from around the world. Originally placed in the gardens for people to enjoy, his work had to be moved to a larger site due to the large number of visitors coming to see his work.

What began as a hobby features over 125 miniature versions of 125 famous and holy locations. 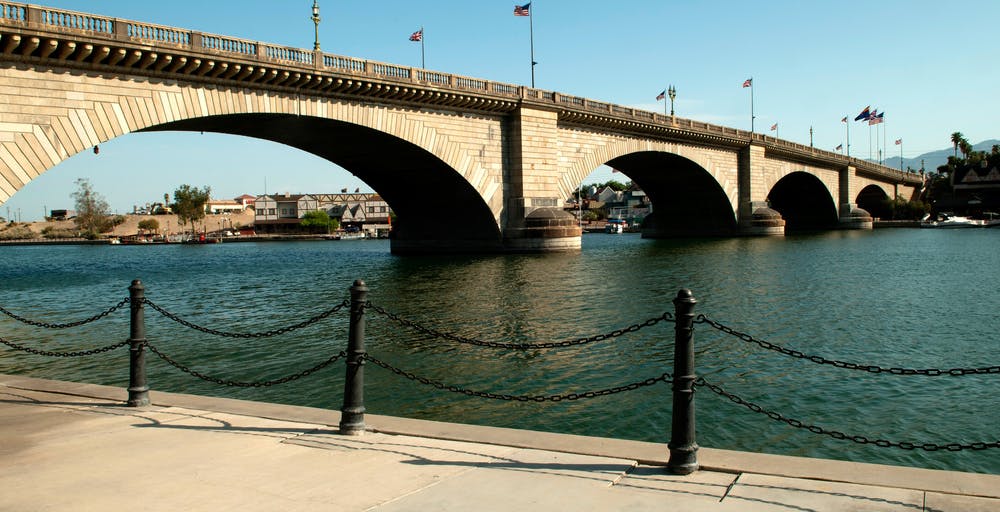 No, it’s not a replica, this is an actual London Bridge transported over 5,000 miles to a new home in Arizona.

In 1967, London Bridge was found to be sinking into the Thames at a rate of an inch every eight years. Renovating the existing bridge was thought to be impractical and instead, the City of London decided that a new bridge more equipped for cars would be the better option.

Rather than just scrap the old bridge, a man named Ivan Luckin thought that it might be possible to sell it and set off to the United States to try and find a buyer.

While the sales pitch raised many eyebrows, Robert McCulloch a millionaire industrialist was in the process of trying to turn land he had bought in Arizona into a tourist destination and thought that the London Bridge was just the eye-catching centrepiece Lake Havasu could do with - they settled on the price of $2.4million. 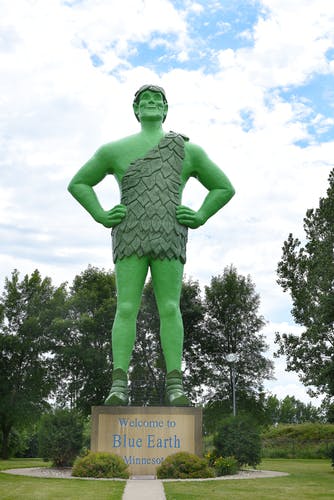 While you’ll likely know him as the mascot of tinned sweetcorn, it was actually the idea of local radio host, Paul Hedberg and not the company to build it.

Although he had permission from the company to set out on his construction project, they didn’t help fund the project. However, that wouldn’t prove to be a problem as Hedberg was able to raise the $50,000 he needed in just a week. 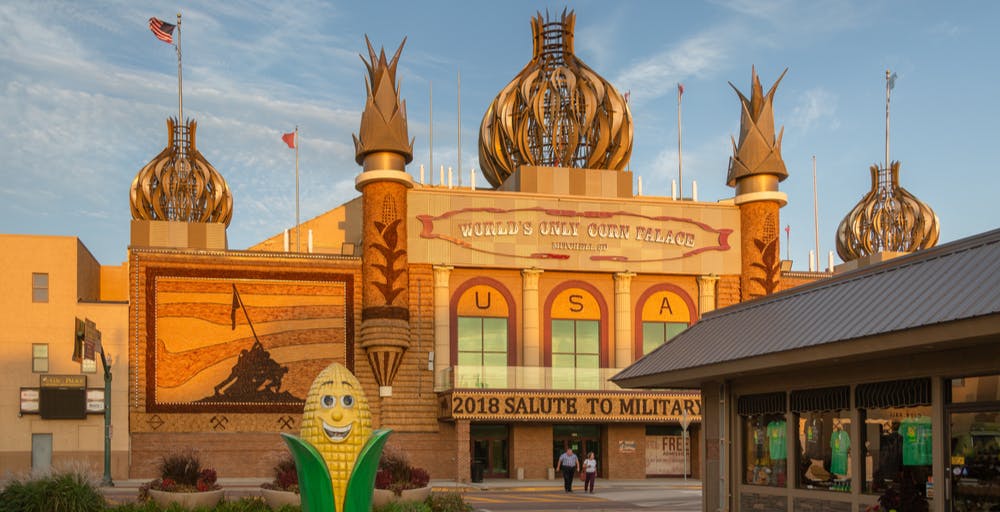 In 1892, Mitchell, South Dakota built its first-ever Corn Palace as a place for locals and neighbouring towns and cities to come and celebrate the fall harvest festival.

The celebration was a hit and became such an attraction that it had to be rebuilt several times in order to accommodate all the visitors.

While not made entirely of corn for obvious reasons, the exterior of The Corn Palace is completely decorated in murals made with naturally coloured corn, corn stalks, grains, and grasses. The designs are changed every year based on a specific theme and past works are displayed inside.

The Corn Palace is also used as a sports and music venue, as well as a convention centre and attracts more than half a million visitors every year.

States with the highest density of roadside attractions

(Most attractions per 100 lane miles)

States with the lowest density of roadside attractions

Before you set off on your next road trip, compare car insurance quotes to see if you could save money with a cheap car insurance deal from money.co.uk.

Starting with a list of more than 840 featured attractions from RoadsideAmerica, we cross referenced our seed list with “Best Roadside Attractions” articles from sites including SillyAmerica, Frommers, AttractionsOfAmerica, and AtlasObscura to find the 250 most commonly recommended roadside attractions.

Results were assigned a score using a min-max normalization formula and combined to calculate an overall Attraction Score.