While there are many reasons that someone may decide to take the plunge and move overseas, one of the biggest ones is the desire to live in beautiful, picturesque surroundings. Whether it's a stunning sea view, pristine white beach or piece of highly-regarded architecture, who wouldn't want to pass one of these on their morning stroll?
Share this guide

But which destinations around the world can claim to be the most picture-perfect? To find out, here’s a look at which global destinations receive the most love on Instagram, TikTok, and YouTube.

And if you’re currently weighing up making a move yourself, be sure to compare mortgages to get the best deals.

The most picture-perfect destinations overall 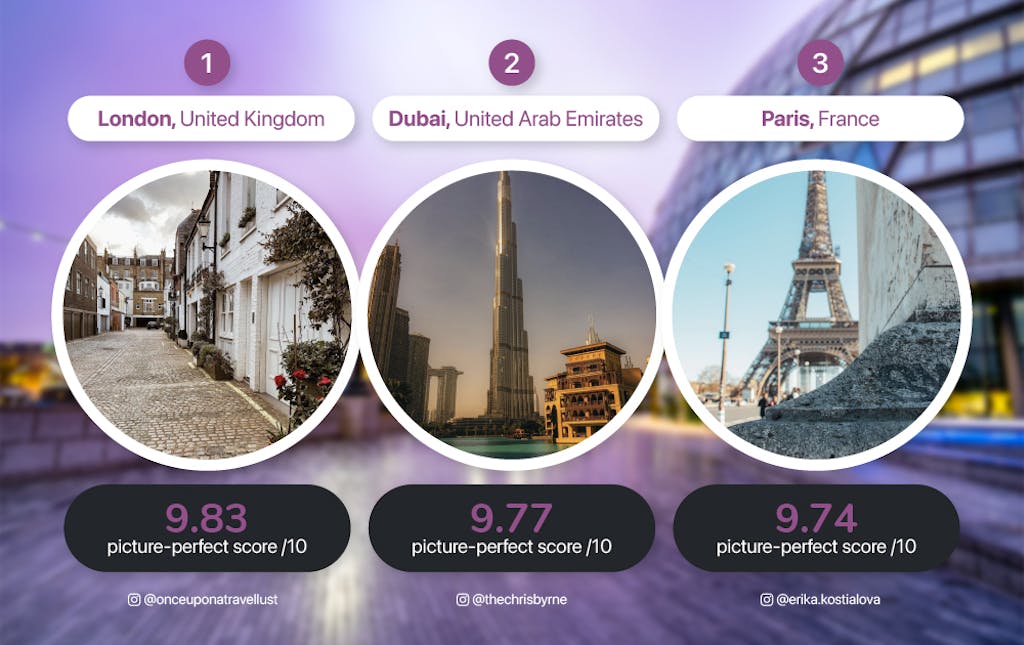 The most popular destination on all three social media platforms combined is the capital of the UK, London.

There are more than 150 million posts on Instagram mentioning the city, more than 28 billion views on TikTok and 150,000+ searches for vlogs on YouTube.

London is one of the most visited cities in the world, with bags of culture and history, while also being a very modern city too.

Not too far behind in second place is Dubai, of the UAE. Dubai is another hugely popular destination, especially on TikTok, with more than 65 billion views on the platform.

But Dubai’s popularity is even more impressive when you consider the fact that the city was little more than a small fishing village in the 18th century.

These days it’s a luxurious tourist destination with ultramodern hotels and architecture and a lively nightlife scene.

Another city that has proved to be a huge hit on social media is Paris, the capital of France.

Whether it’s the iconic landmarks such as the Eiffel Tower or Notre Dame cathedral, or just capturing street scenes of the cafes and bistros that line its leafy boulevards, many people have taken to socials to share their trips to the City of Love. 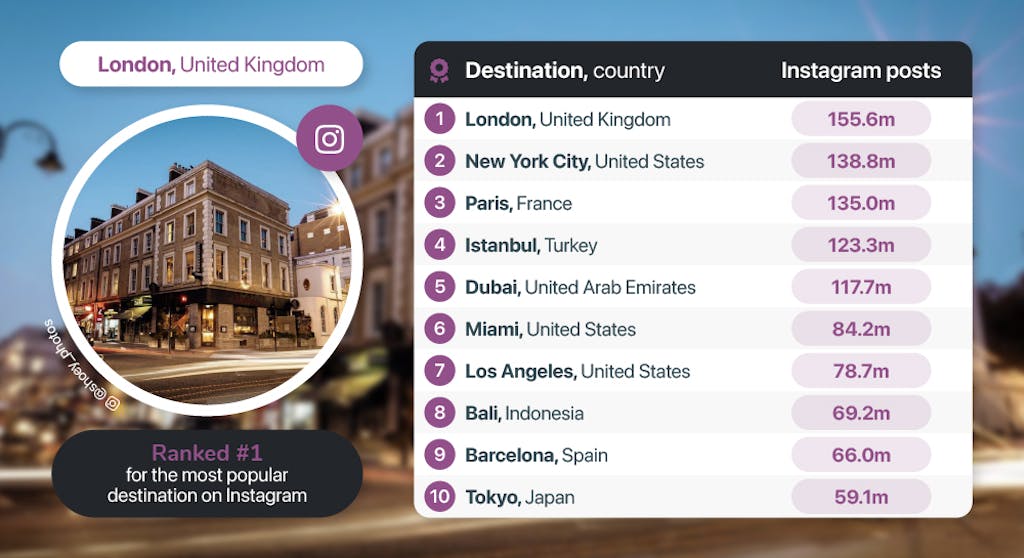 The most popular destination overall was also the most loved when it came to Insta, with 155.6 million posts on the platform using the hashtag #london.

London is an endlessly Instagrammable city, with iconic landmarks seemingly everywhere you turn, as well as a number of fancy bars and restaurants to explore and share with your feed too.

The most popular destination on TikTok 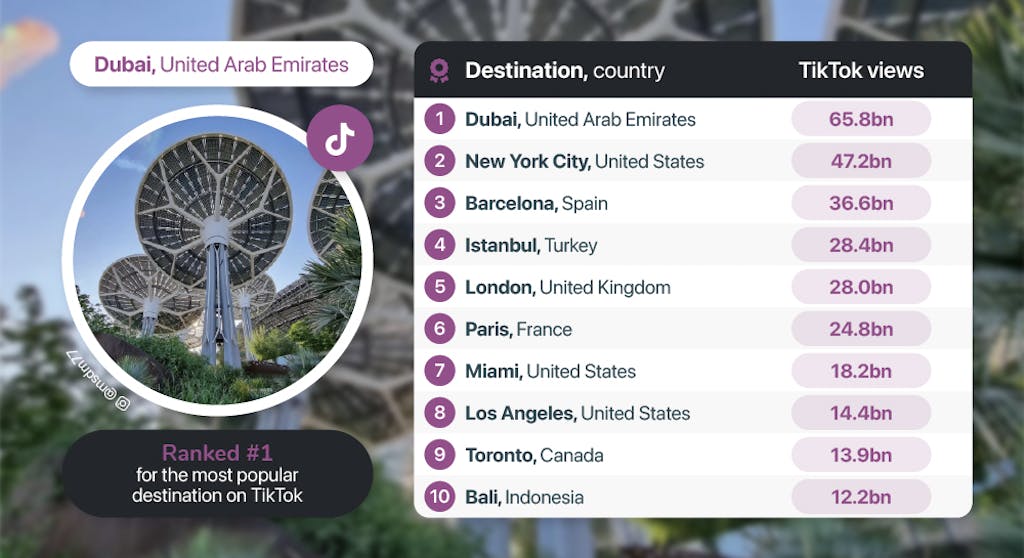 When it comes to TikTok, the relative newcomer on the social media scene, it’s Dubai that comes out as the most popular destination, with more than 65 billion views on videos mentioning the city.

The luxurious sights of Dubai are tailor-made for TikTok, and it’s also home to the world’s tallest building, the Burj Khalifa. 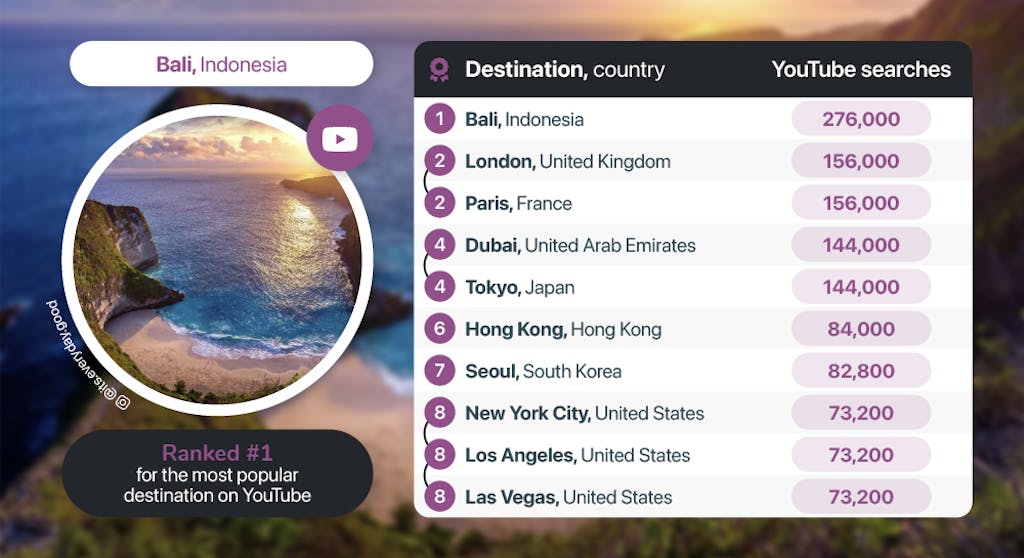 While Instagram photos and TikTok videos can give you a brief snapshot into a destination, one way to really get an insight into what it’s like to visit is to check out vlogs from travel influencers on YouTube.

The most popular destination amongst vloggers is Bali, Indonesia, with over a quarter of a million annual searches.

Looking at over 100 popular destinations (sourced from Euromonitor’s Top 100 City Destinations Index 2021 and various other articles), each of the following metrics was sourced.

Each destination was then given a normalised score out of 10 for each factor before an average score across each of the factors was taken.

Note that for each destination, the hashtag or search term that has the highest number of posts was used.

The number of Instagram posts that mention the destination using hashtags.

The number of times that videos mentioning the destination using hashtags have been viewed on TikTok.

The number of annual searches on YouTube for the search term ‘[City] vlog’, sourced using Ahrefs.