Earning Their Crust - How much could bake-off contestants have made through Instagram?

Recent studies have shown that every follower on Instagram is worth an estimated £0.0033. With The Great British Bake Off returning to our screens this month, money.co.uk analysed every finalist from seasons 1-10, to discover how much bread they could earn through Instagram.
Share this guide How have Season 11 fared?

With the finalists now in place for the latest season of the show, we looked at which of them had the biggest increase from the beginning of the season to the final week. 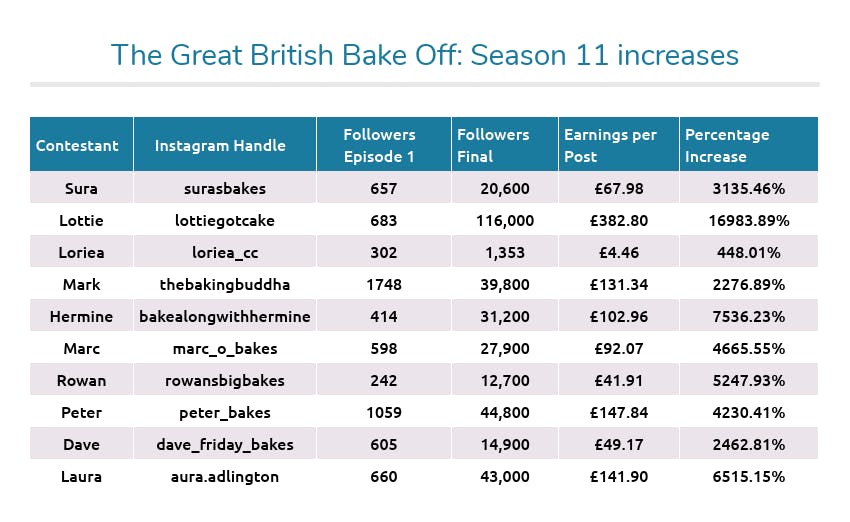 But it’s young star baker Peter who has proven the most popular on social media. Already boasting 1,000 followers at the start of the competition, he has now eked past Laura with 43,000 followers, putting his number at £147.84 per post.

But it isn’t a finalist that is set to benefit the most from their appearance on Bake-Off. Fan favourite Lottie went from just 683 followers to an incredible 116,000. Able to charge just £2.25 for a post before Bake-Off, she can now command a fee around the £382.80 mark, an increase of a staggering 16,984%.

Which season did the best? 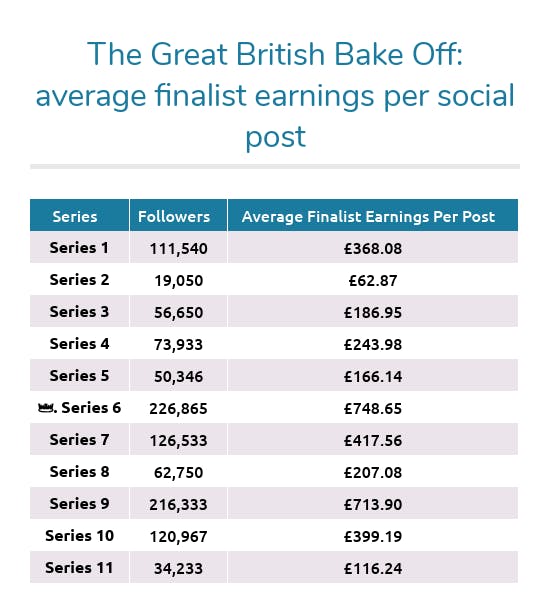 Series 2 comes out as one of the fewest success stories for social media, with an average follow count of 19,050 and as a result an estimated ad revenue of £62.87 per post.

On the other end of the scale, Series 6, thanks in part to the huge success of Nadiya, takes the crown, with Series 9 not far behind it. On average these two series have 220,000 followers and ad revenue of more than £700 per post.

If you are planning to borrow money to finance your new purchases, you could consider credit card. A credit card requires regular repayments and can accrue interest if you do not pay back the full amount.

We used wikipedia to determine the finalists per season. We then manually retrieved their Instagram handles and follower numbers, before multiplying the number of followers with the estimated value of each follower (£0.0033). This calculation gave us the potential earnings per Instagram post.

The earnings per post data was retrieved from this research into influencer earnings of Love Island contestants, which is based off of a 2019 study from emarketer.