Spoons Savings: The hidden costs of a pre flight meal

Following the easing of international travel restrictions, Brits have capitalised on the holiday deals available to air bridge destinations. However, despite the savings made by slashed holiday prices this year, it is easy to forget about the hidden costs that sun-seekers may face before even stepping onto the plane.
Share this guide 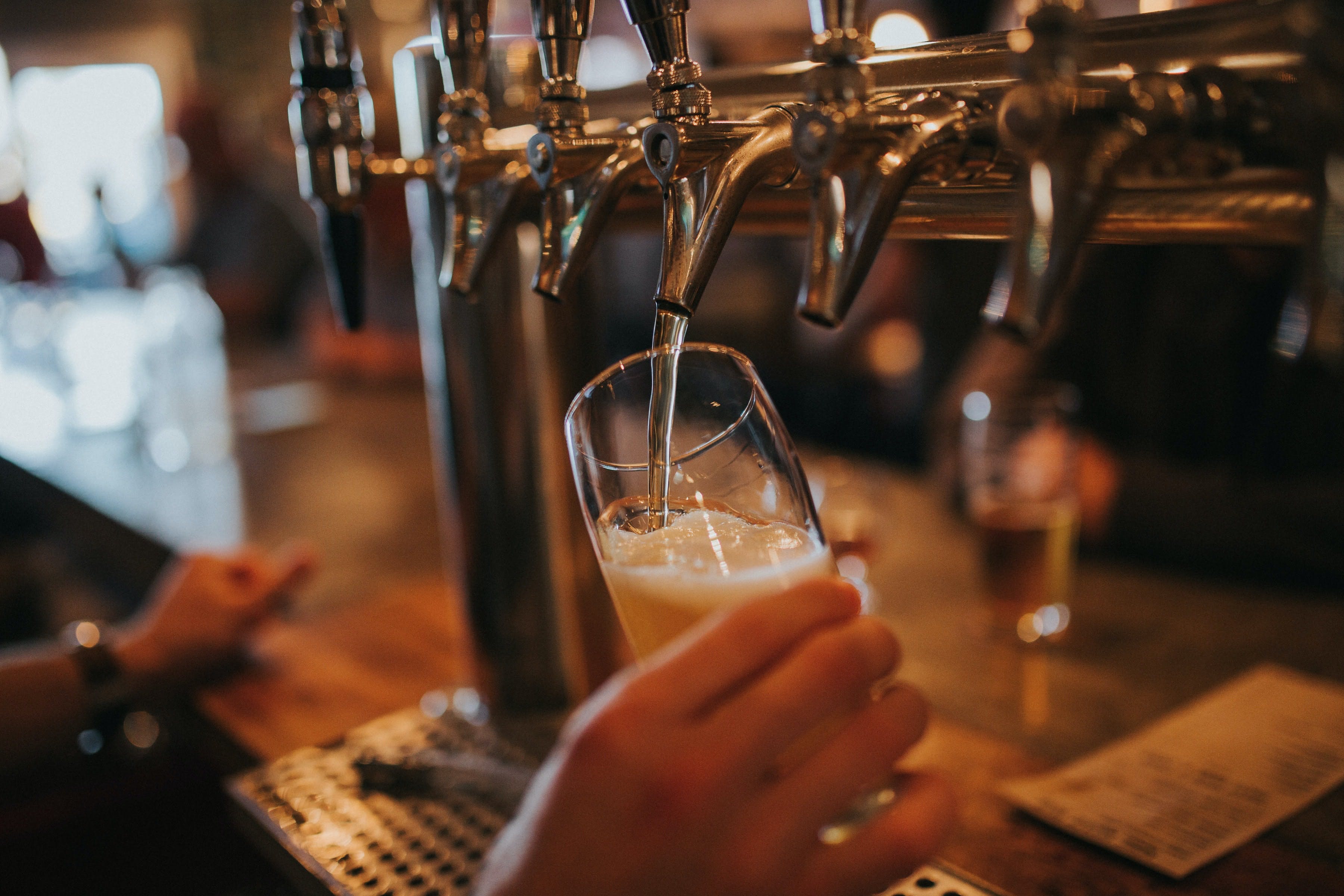 With many Brits considering the airport pub as the beginning of their holiday, the consumer spending experts at money.co.uk, have analysed the cost of six popular food and drink items* at airport branches of JD Wetherspoons, comparing them to the local Wetherspoons outside of the airport.

Compare credit cards to help spread the cost of your spending

Through this, we have revealed that airport 'Spoons, on average, are twice as expensive as their local counterparts. 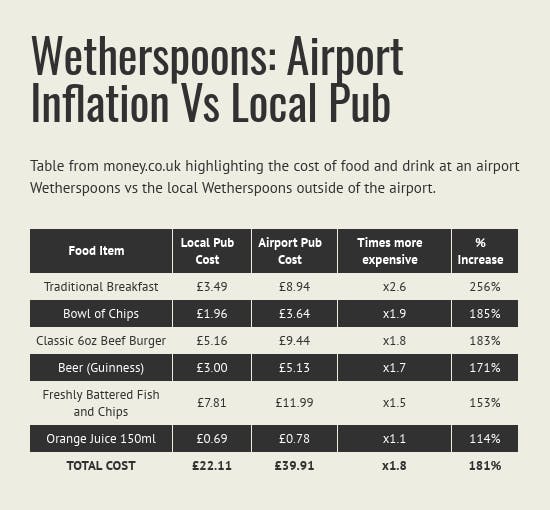 The Wetherspoons Traditional Breakfast has the largest price hike amongst the six items. The full English, which consistently costs just £3.49 in the local Wetherspoons outside of the airport, is over two and a half times more expensive (+256%) inside the airport terminal, on average costing hungry holiday-goers £8.94.

Alongside this, a 150ml glass of orange juice is 14% more expensive inside the airport. Costing, on average, £0.69 in the local Wetherspoons outside of the airport and £0.78 in the airport ‘Spoons.

Burger and a pint

Our consumer spending experts have also broken down the true cost of a pre-flight burger and pint.

In the local Wetherspoons’ outside of the airport, pub-goers could expect to pay on average £5.16 for a classic 6oz beef burger. However, inside the terminals, the same burger in a bun costs almost twice the price (+183%) at £9.44.

A pint of Guinness is subject to a similar sized price hike inside Wetherspoons’ airport branches. Britain’s most popular beer, which costs on average £3.00 in the local ‘Spoons outside of the airport, is one and a half times more expensive (+171%) inside the airport terminal at £5.13.

The Red Lion at Gatwick’s North Terminal serves Wetherspoons’ most expensive pre-flight pint of Guinness at £5.45.

Our research found that the British classic of fish and chips is more than one and a half times more expensive (+153%) in an airport Wetherspoons than in the local ‘Spoons.

Costing on average, £11.99 at an airport, choosing to dine at the local ‘Spoons could save you over £4 per person. 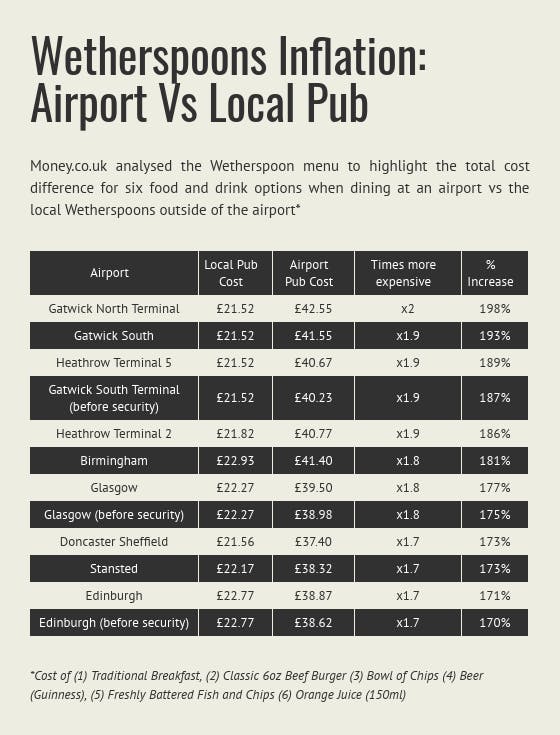 Despite the price discrepancy, there is an average of less than four miles (3.9 miles)** difference between flightside pubs and their local equivalents. So it may be wiser to grab the pre-flight tipple and meal prior to checking in, instead.

Additionally, it is always important to check for the most reasonable exchange rate when going abroad. Be sure to check out money.co.uk’s Travel Money rates, for our best deals.

If you are looking to travel abroad this summer, money.co.uk has compiled a handy guide related to Airport Bridge destinations, highlighting all you need to know about holidaying in 2020.

You can also compare travel insurance policies with money.co.uk to help find the right cover for your trip abroad.

** Data gathered using Google Maps. Distances are calculated by assuming a consumer is travelling from the local Wetherspoons to the airport by car.