From blasting into orbit, to owning football clubs, over the past decade we’ve seen the rise of the public facing billionaire.

Once a rare phenomenon, confined to a boardroom or a big leather chair, in 2021 billionaire businesspeople are more in the public eye than ever before - they’re even hosting Saturday Night Live. The boom in billionaires might not just be because of the rise of social media and well-thought-out PR, there are in fact more billionaires than ever before, with Forbes estimating more than 2,500 billionaires in the world as of September 2021.

Regardless of your salary, you'll likely need a current account to have it paid into. Check out our best current accounts to find the right one for you.

So, with business moguls becoming household names and celebrities in their own right, money.co.uk has set out to find the most searched, most loved and most popular of the world’s top 1%. 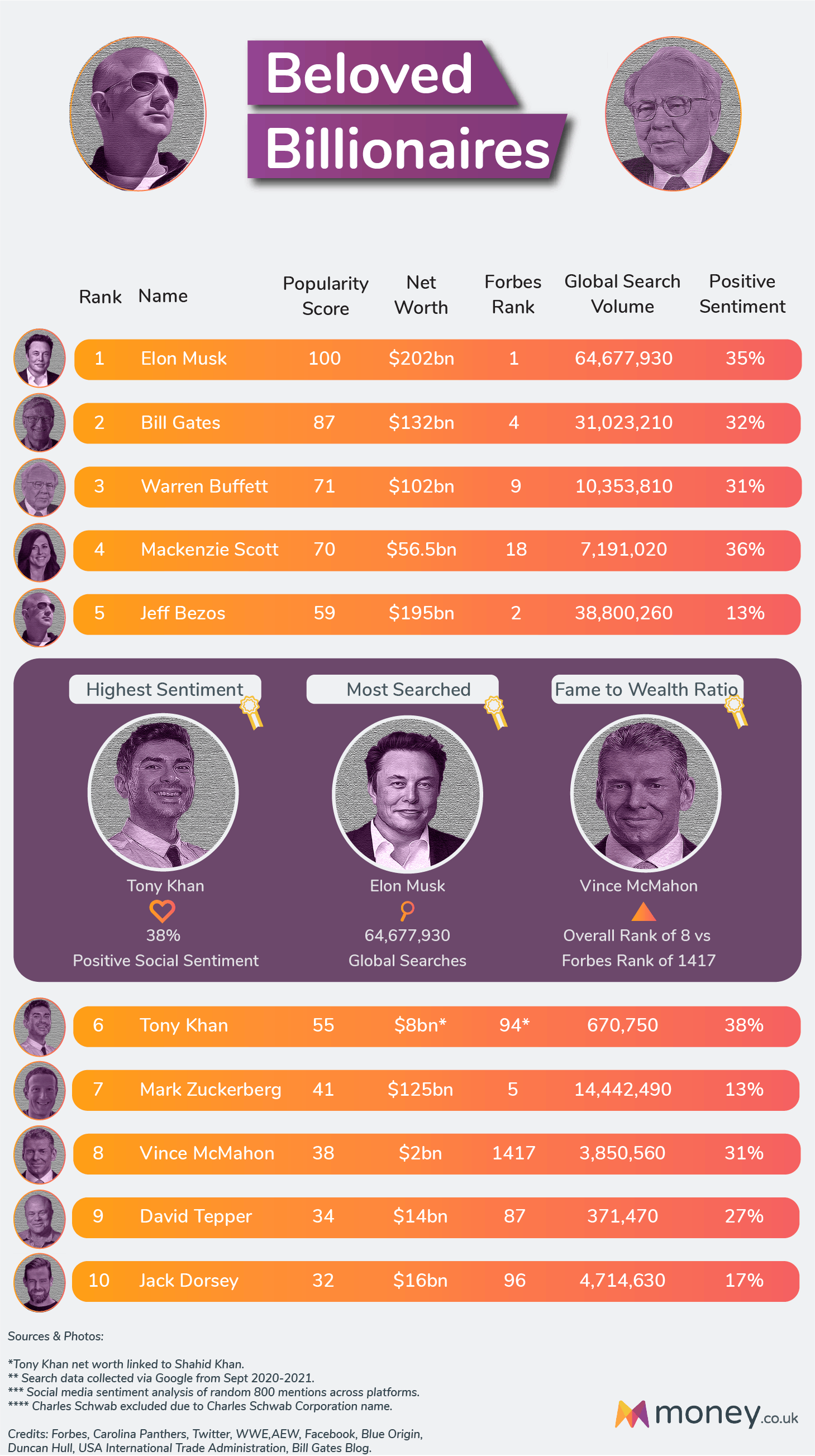 Topping the list as the world's most popular billionaire businessman was Elon Musk, the eccentric tech genius behind Tesla, SpaceX and PayPal.

According to our research, Musk was the most searched for billionaire in the world over the past 12 months, also placing third in our sentiment analysis with 35% of social media mentions about ‘Papa Elon’ being overtly positive – making him the overall winner.

Rounding out the top five for most popular billionaires were Microsoft founder Bill Gates, investor Warren Buffett, and author and philanthropist Mackenzie Scott who placed one spot higher than ex-husband Jeff Bezos, the brains behind Amazon and space exploration company Blue Origin.

Social media tycoons Mark Zuckerberg (7) and Jack Dorsey (10) also cracked the top 10, with the former amassing an impressive 14 million searches but also achieving one of the lowest sentiment scores of just 13%. Just missing out on a top 10 spot were Snapchat founders Evan Spiegel and Bobby Murphy, placing 12th and 18th on the list respectively.

In a surprise twist wrestling rivals Vince McMahon (8) and Tony Khan (6) both feature in the top 10 most popular billionaires, despite being the ‘least wealthy’ people in the top 100.

Overall, 60% of the top 10 most popular billionaires were tech moguls, with the remaining spots split between investment and pro-wrestling tycoons.

The Most Searched Billionaires: In Musk we trust

Along with taking the number one spot overall, Elon Musk dominated web searches as the most searched for billionaire over the past year.

Following a particularly high profile 12 months Musk, who is also the richest person on the list with an estimated $201.7bn dollars to his name, featured in 64,677,930 total worldwide searches across the past year, ranking number one across all 30 countries in our study and dwarfing the competition.

Rounding out the top five for most searched billionaires was Amazon and Blue Origin’s Jeff Bezos, Microsoft founder Bill Gates, Facebook’s Mark Zuckerberg, and investor Warren Buffett. However, none of these came close to Musk, who took first place by more than 25 million searches.

Creeping into the top 10 most searched business billionaires at number seven was WWE’s Vince McMahon. With a net worth of ‘just’ $2.2bn and a Forbes ranking of 1,417, McMahon significantly outperformed wealthier individuals, giving ‘Mr McMahon’ the honour of highest popularity-to-wealth ratio of any billionaire, along with being the only billionaire to our knowledge to win the Royal Rumble match.

The Most Beloved Billionaire: The ‘All Elite’ of the business elite

When it comes to sentiment, our study found that the title of most ‘beloved billionaire’ belonged to sports mogul Tony Khan, with a whopping 38% of all mentions of the 38 year old being positive, more than any other person on the list.

The son of Shahid Khan, Tony plays a key role in multiple sports franchises including the NFL’s Jacksonville Jaguars and Championship football team Fulham. However, in recent years he is most well-known for his role as owner of All Elite Wrestling (AEW), a hot new competitor to Vince McMahon’s WWE, which has quickly gained a large following, signing big wrestling names such as CM Punk, Chris Jericho, Daniel Bryan and Kenny Omega.

Other beloved billionaires included Vince McMahon (23%), Carolina Panthers owner David Tepper (27%), Bill Gates (32%), Elon Musk (35%), and Mackenzie Scott whose philanthropic work, including the donation of over $6 billion dollars to charitable causes, put her in second place overall for positive sentiment with a score of 37%.

To collate social sentiment, the study also looked at social media mentions across Facebook, Twitter and Reddit collecting a random sample of approximately 600 mentions per billionaire, which were then subject to sentiment analysis. Only overtly positive mentions counted towards the overall percentage, negative and neutral mentions do not count.

Once collected a weighting was applied to both metrics, to give an overall ‘popularity index’ of the people most searched and most praised.

As the study focuses on ‘business’ based billionaires, ‘celebrity’ billionaires who achieved significant notoriety before becoming billionaires or who are otherwise predominantly known for other pursuits are excluded from the study, including Michael Jordan, Steven Spielberg, Jay-Z and Oprah.

Charles Schwab was also excluded from the overall list due to the inability to separate searches and mentions of the billionaire with the company which features his namesake.